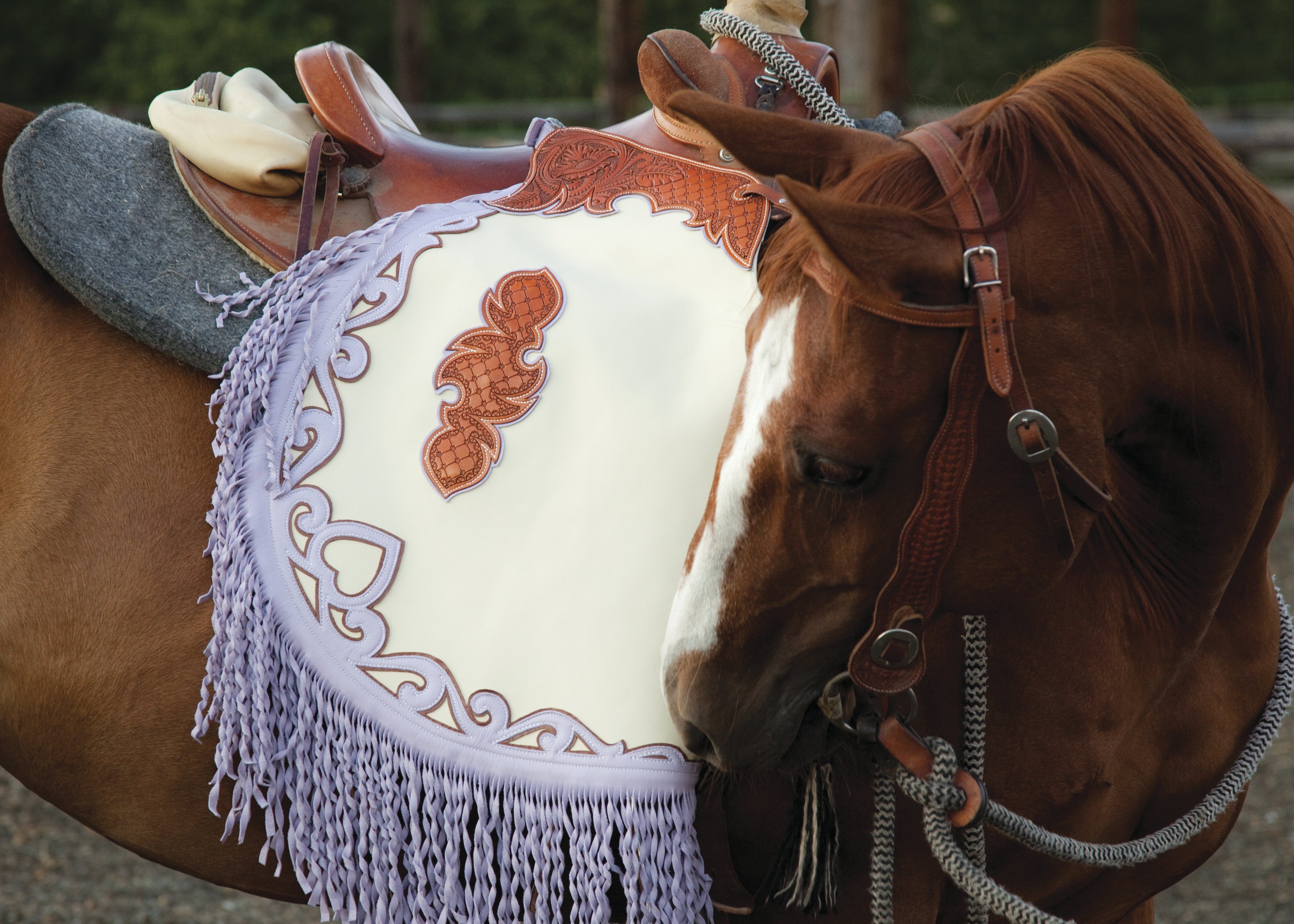 FASHION HAS CLOSELY ECHOED TRENDS IN FINE ART since the latter half of the 19th century when famed French couturier Paul Poiret integrated the designs of the artists he admired and those who were his friends — Picasso, Matisse, Maurice Vlaminck — into his dress designs. He wove their bright colors and Impressionist styles into the fashions he created.

In that era, fashion and art events on an international scale were nearly indistinguishable. Charles Worth first showed his designs at the Crystal Palace Exhibition in London in 1851. As art styles evolved so did fashion: from heavily corseted silhouettes that reflected Art Nouveau interpretation to the Modern art-inspired uncorseted and simplified silhouettes of the 1920s and the streamlined body-hugging dresses of the 1930s.

Fashion was then, and is now, art for the body, an expression of individuality and a declaration of the times. Colors and fabrics echo the strokes of the paintbrush, the spectrum of the palette. Many of the artists who work in Western fashion today are preserving art forms that technology and time have attempted to erase; others are continuing the traditions of couturiers and combining them with the materials, textures, history and even the essence of the West.

With a love of both horses and art in her soul, and ranching a part of her family for generations, Clair Kehrberg decided to become a saddle maker. Growing up on a family cattle operation near John Day, Oregon, saddles were second nature for the girl who preferred riding horses to any other mode of transport.

Studying under masters of the craft, all passionate teachers, Kehrberg honed her skills as a leather carver. But when creating saddles didn’t allow her the full use of her carving ability, she started making gorgeous, deeply carved handbags with twisted fringe, unique leathers, overlays and sometimes outrageous colors. Kehrberg never uses the same pattern twice, opting instead to free-hand draw individual patterns that echo her clients’ desire or personality, then carving or stamping the thick leather. She creates her own tools as she sees the need for new patterns and experiments with exotic combinations of leathers.

From her saddle-making experience, Kehrberg understands the practicality of building something that is functional, and combined with her artistic flair, her handbags are at once beautiful and useful. Expect Kehrberg’s carving talent to set a new standard in Western art handbags.

Inspired by collections in museums, her mother and Indian friends, Suzanne MM Warner has made her life’s work about beads. She creates in her own style, a style she calls “bead weaving.” Warner weaves without a pattern, allowing the colors to guide her as the piece comes to life. Some have geometric patterns; others have shells woven in amongst the beads. All have a story.

Warner’s passion for beads and shells developed when she worked in Hawaii and was introduced to Ni’ihau shell leis. Having learned the history and structure of these leis from a Hawaiian elder, Warner translates her exacting skills into beaded pieces using traditional beads, Japanese delica beads, shells, stones and pearls. Her technique is time-consuming — as much as 40 hours go into every piece.

“The old Gaelic word ‘bede’ means to pray … when I am beading that is what it feels like. Every bead is a prayer that is connected to another prayer that becomes a symphony of prayers that someone gets to wear and be blessed [by],” offers Warner. Not only is she preserving a piece of the West with her own interpretation of a Native American tradition, but she blends in Hawaiian culture for truly unique pieces. The resulting colorful adornments are delicate, thoughtful and passionate works of art created to be worn and enjoyed.

The artistry of cowboy hat design began when John B. Stetson created his first piece of headwear for a hunting trip in 1865. Fashioned from fur hand-worked into felt, the hat started a fashion phenomenon unique to the West. A hat reflects personal style; owners decide whether theirs has a high crown, a short brim or special crease.

Hat maker Kevin O’Farrell started making hats when his unusually shaped head predicated it. After purchasing two 150-year-old pieces of equipment that were critical to creating hats that fit the wearer, O’Farrell opened for business more than three decades ago. “It’s a hat that will even stay on when a good wind comes up,” O’Farrell offers of his original design. He spent years learning the trade from the best hatters in the business.

Now O’Farrell has passed his hard-won wisdom down to his son, Scott, who continues the legendary design practices for which his father is well known. The ability to “know” the best proportions of crown and brim for each person, along with adding embellishments ranging from beaded brims to special hatbands, are Scott’s specialty, too. In the more than 200 steps that it takes to create a felt cowboy hat, O’Farrells are truly a work of art recognized the world over — from the plains of Wyoming to the streets of Paris — as uniquely Western and beautifully timeless.

Fashion designer Meredith Lockhart’s passion for clothes began when Christmas brought fabulous handmade doll apparel from her mother. When she was 12, Lockhart made her first dress for school and was hooked on design and sewing. With a family full of artists and musicians, pursuing fashion design was natural for Lockhart.

Inspired by the horses that surrounded her on her Kansas farm, Lockhart creates haute couture designs with hints of the West for clients around the world. She hand dyes her own fabrics, carefully embellishes her designs with hand-painted and rhinestone elements and creates pieces that are expertly tailored. Lockhart’s talent was recognized by the Buffalo Bill Historical Center in 2009 when the prestigious museum awarded her Best Collection at its annual Cody High Style Show.

Educated as a biologist with practical experience as a miner, jeweler Sam Ferraro has always called the West home. In a crowd you will never miss him: his signature black hat, flowing silver mustache and gracious smile stand out as much as his jewelry, its lines both graceful and full of thought. His modern wildlife pieces have been sought after by museum shops nationwide and his elk ivory pieces are regularly commissioned by celebrities.

Ferraro’s use of the lost wax process makes him truly unique in a world of easy come-easy go. Hours are spent sculpting the wax into sculptures that, once the molten precious metal hardens, will adorn the wrist or finger, or perhaps dangle delicately from ears or a fine chain. Working in diamonds, the art of pavé is one of Ferraro’s gifts: He sets the carefully matched tiny stones to reflect the light perfectly. Infinite patience and a discriminating eye are among his other attributes. Thanks to his creative spirit and talented hands, wearing a Sam Ferraro piece is like wearing a master’s sculpture.

Recognizable the world over as iconic symbols of the West, cowboy boots are worn as expressions of individuality and tokens of affinity for the lifestyle. From couture fashion runways to dusty saddles, cowboy boots have been the soles preferred by world leaders, fashionistas and working cowboys the world over. Cowboy boot design requires a measurable attention to detail. The fit, the leather and the style must work in harmony to create a beautiful and functional piece of wearable art.

Dr. Jim Hill never planned to own a boot company. The racehorse vet grew up in South Florida where his family was in the cattle business. Riding by the time he was 7, his love of horses inspired the young boy to become an equine veterinarian with a passion for racing. Among his patients was the only undefeated Triple Crown Winner: Seattle Slew.

Virtually retired from the tracks in 1996, Dr. Jim Hill was both, as he says, “intrigued and coerced” into the boot business as a silent partner in a small company. He watched the company struggle in its first few months so he stepped in, took the reins and turned it into one of the premier custom boot companies in the United States.

JB Hill boots are not ornate, but are known for their use of the finest leathers and exotic skins. The company’s boot makers have skills that run generations deep and can produce a fit that is unmatched, all contributing to the company’s highly regarded reputation worldwide.

Cowboy boots are a statement of individual style. “Ours are subtle and beautiful,” says Dr. Hill. 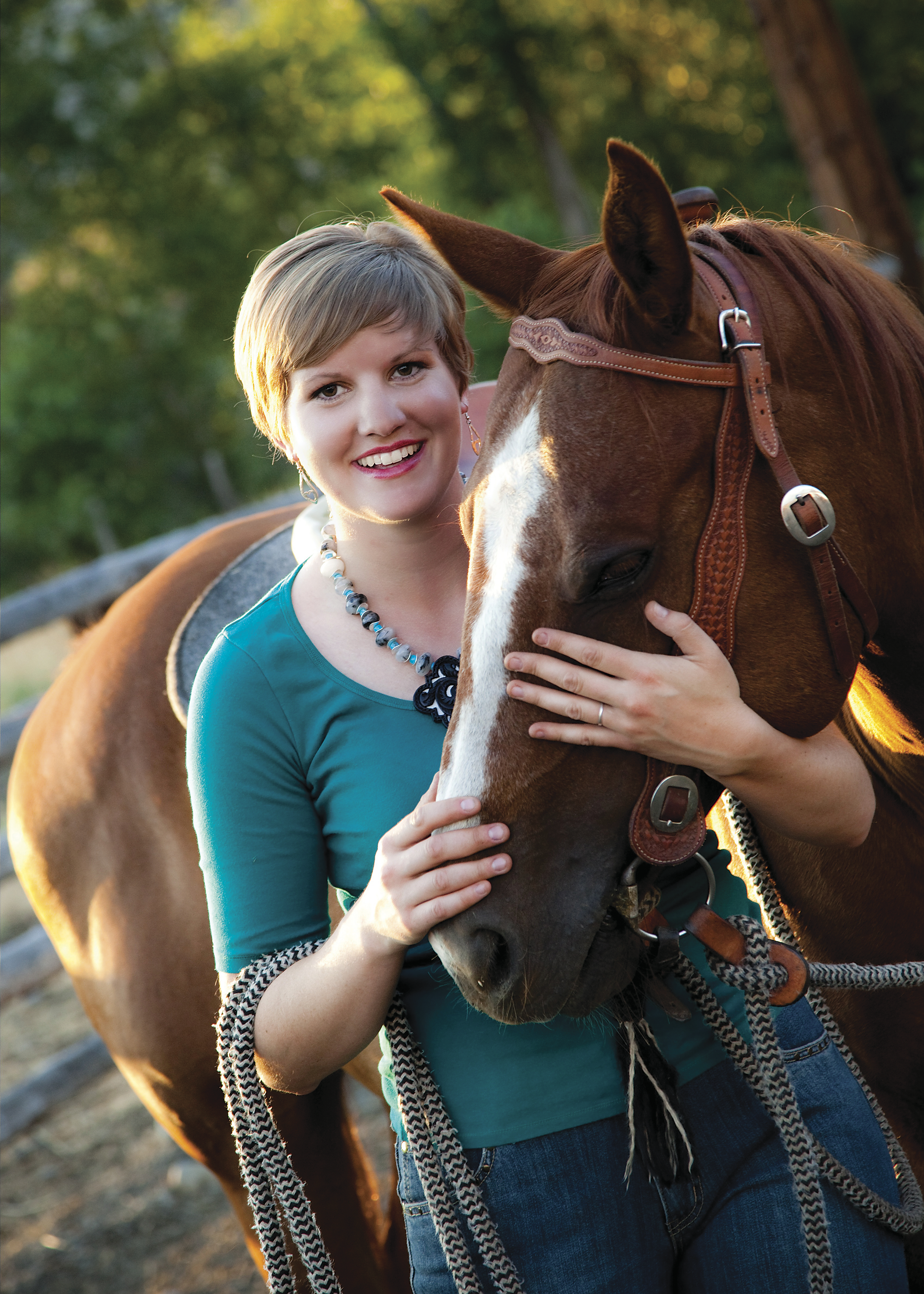 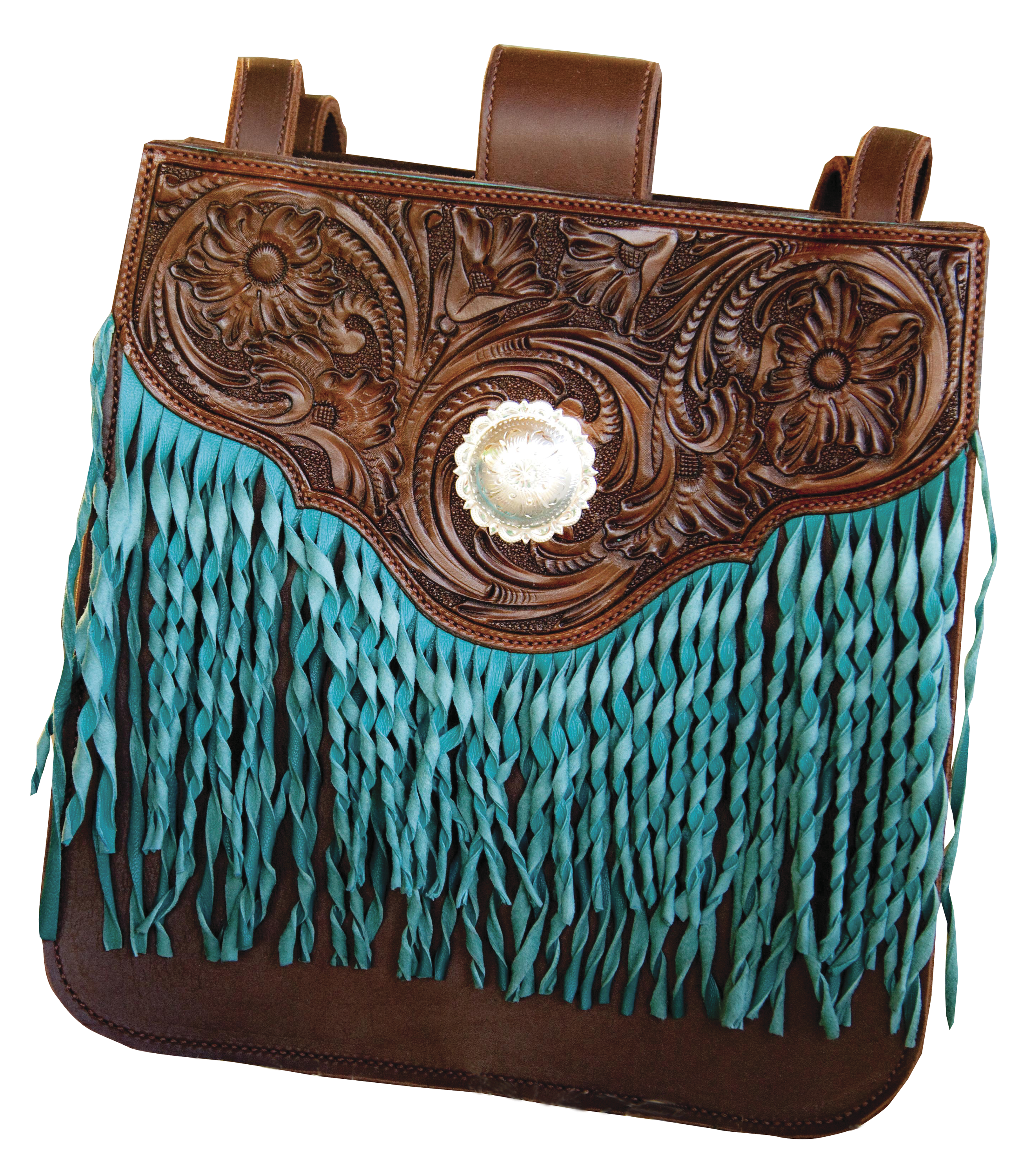 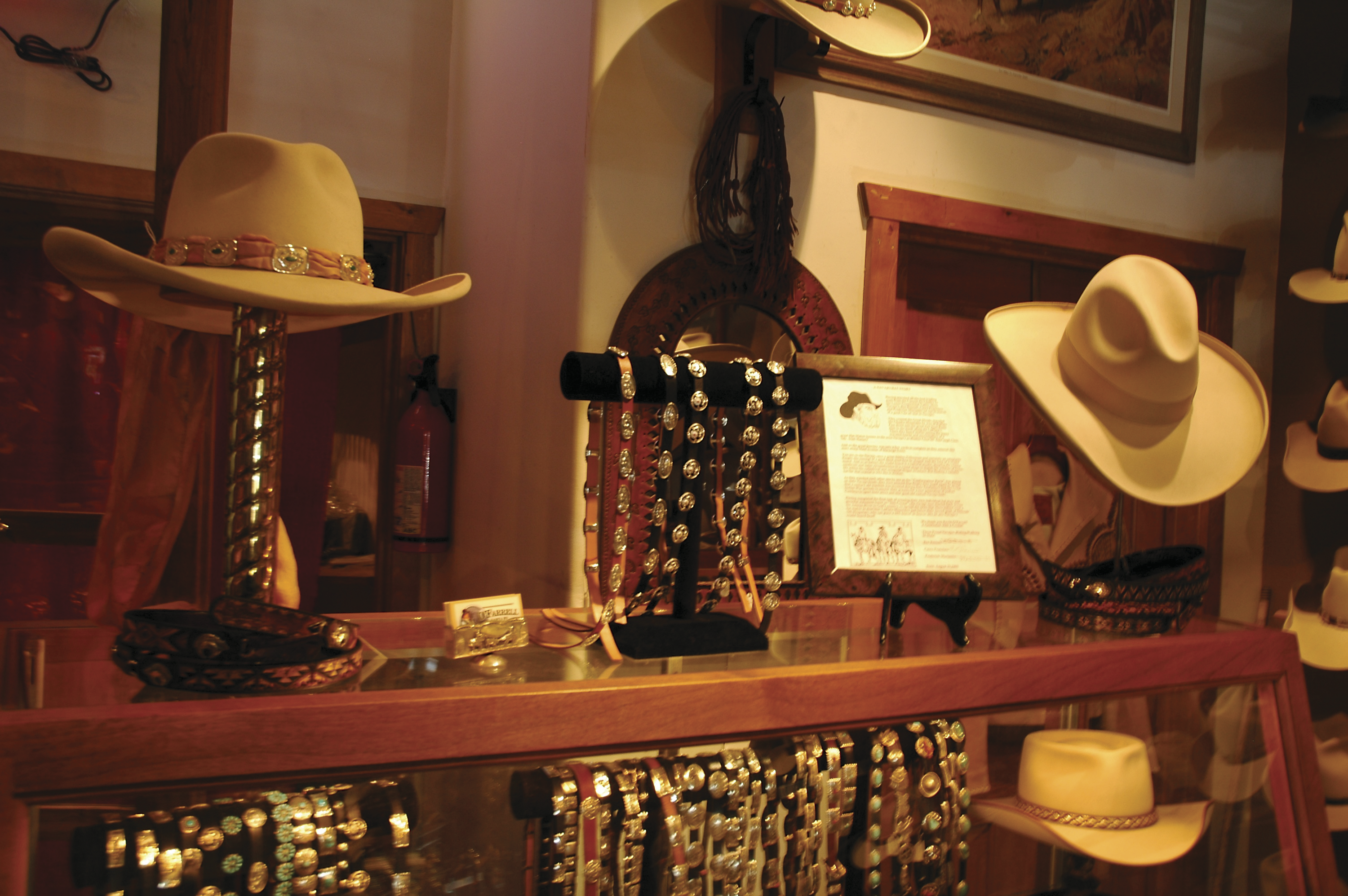 Hats and hatbands by Kevin O’Farrell and his son, Scott 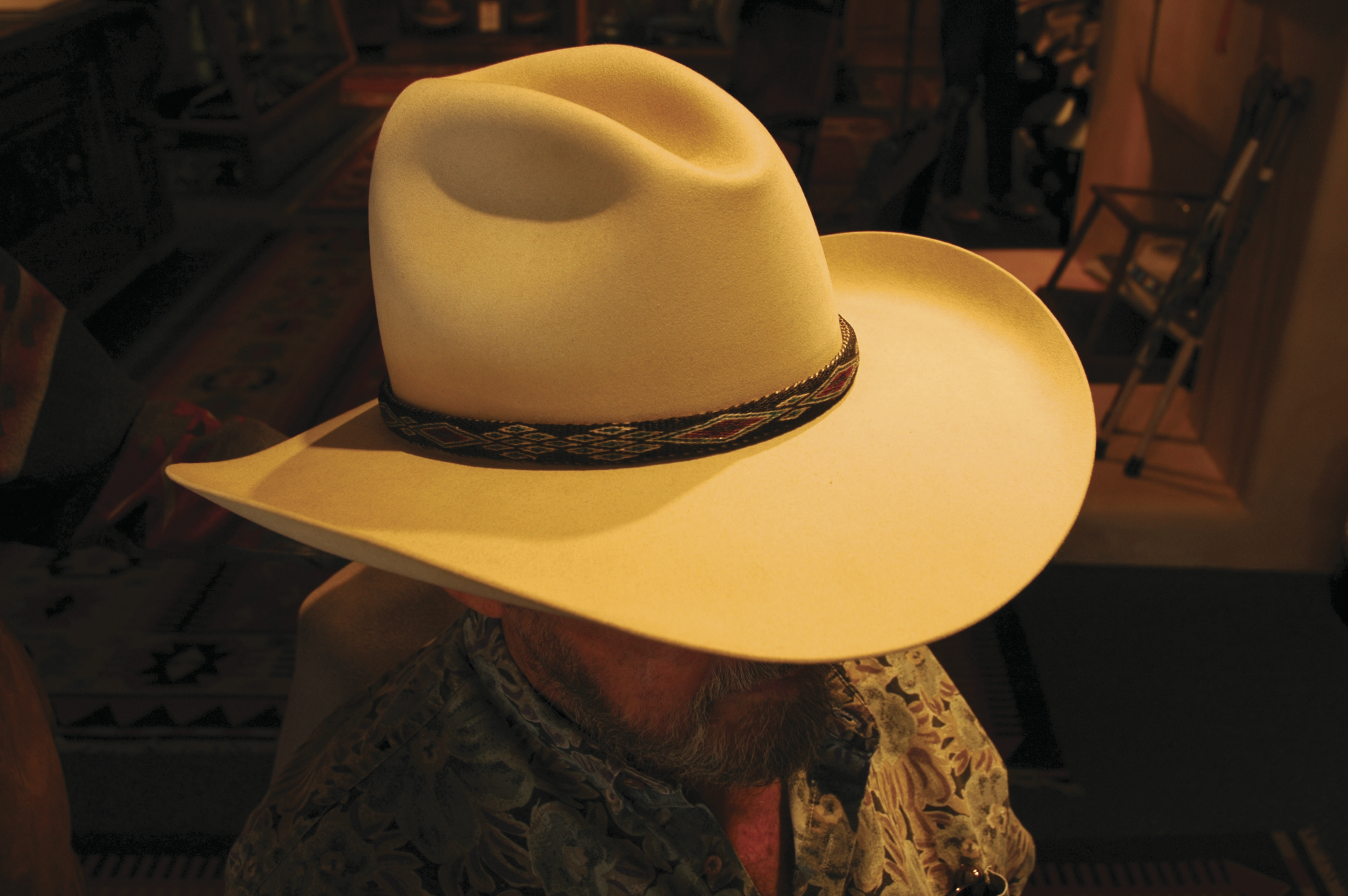 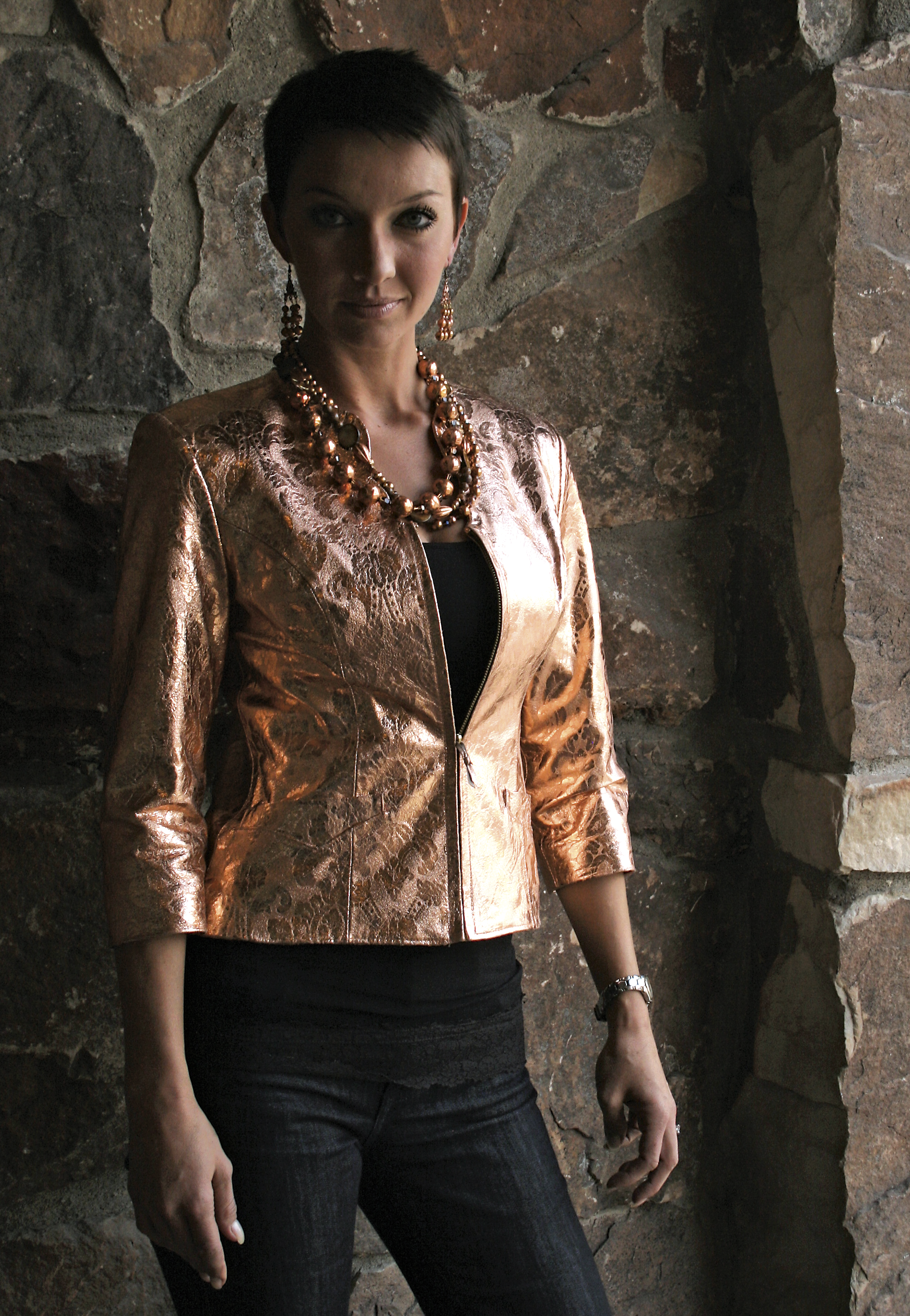 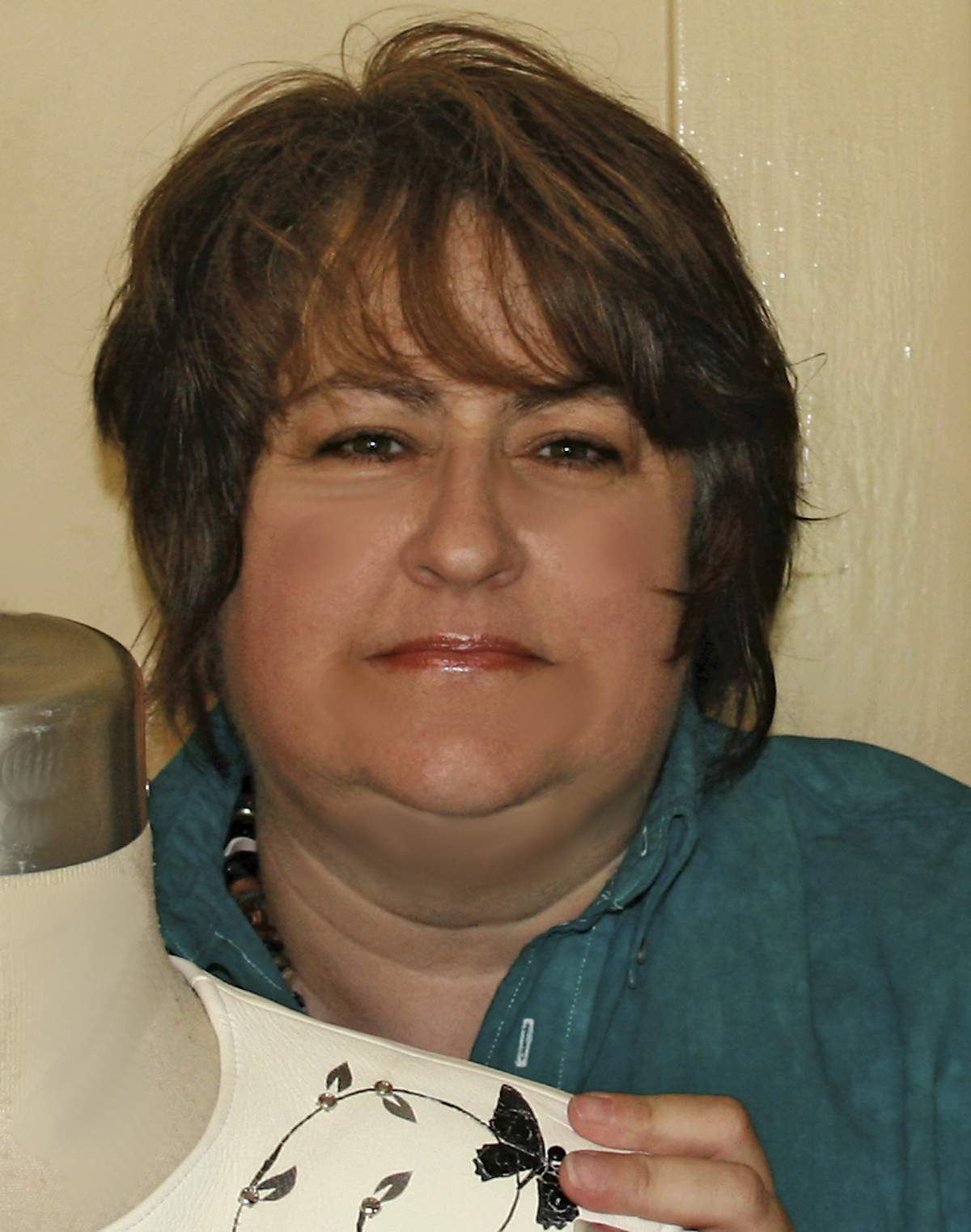 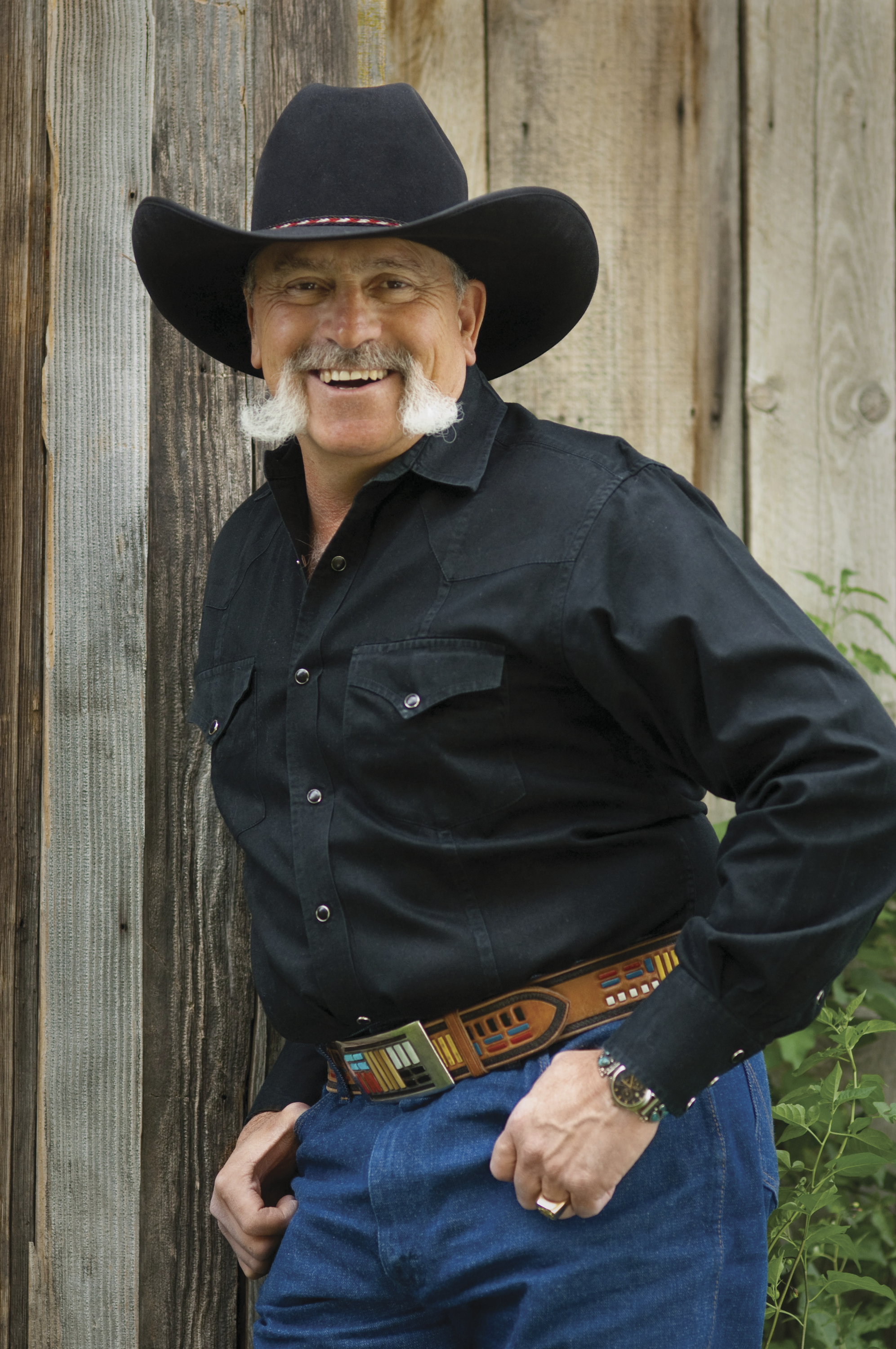 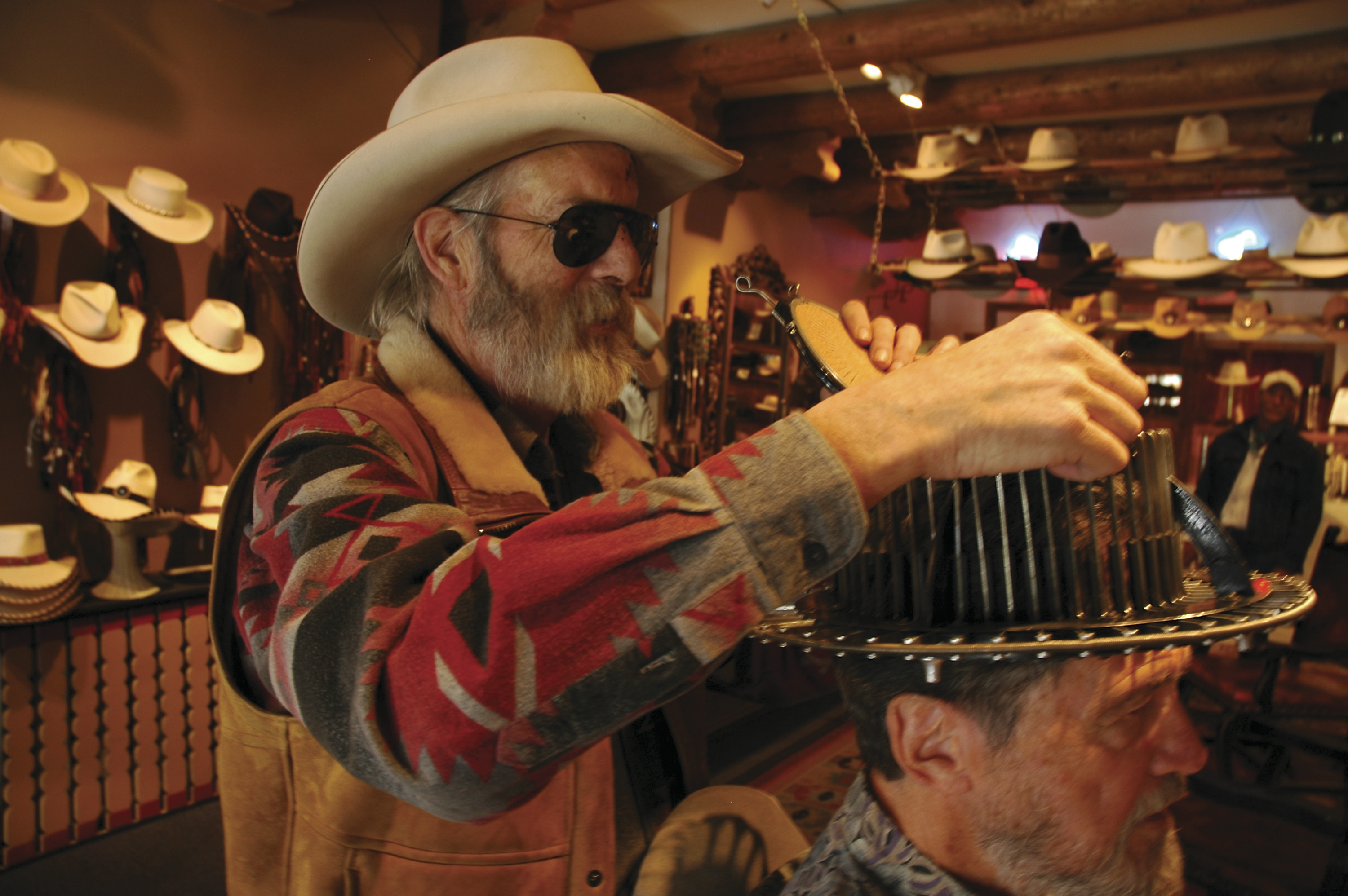 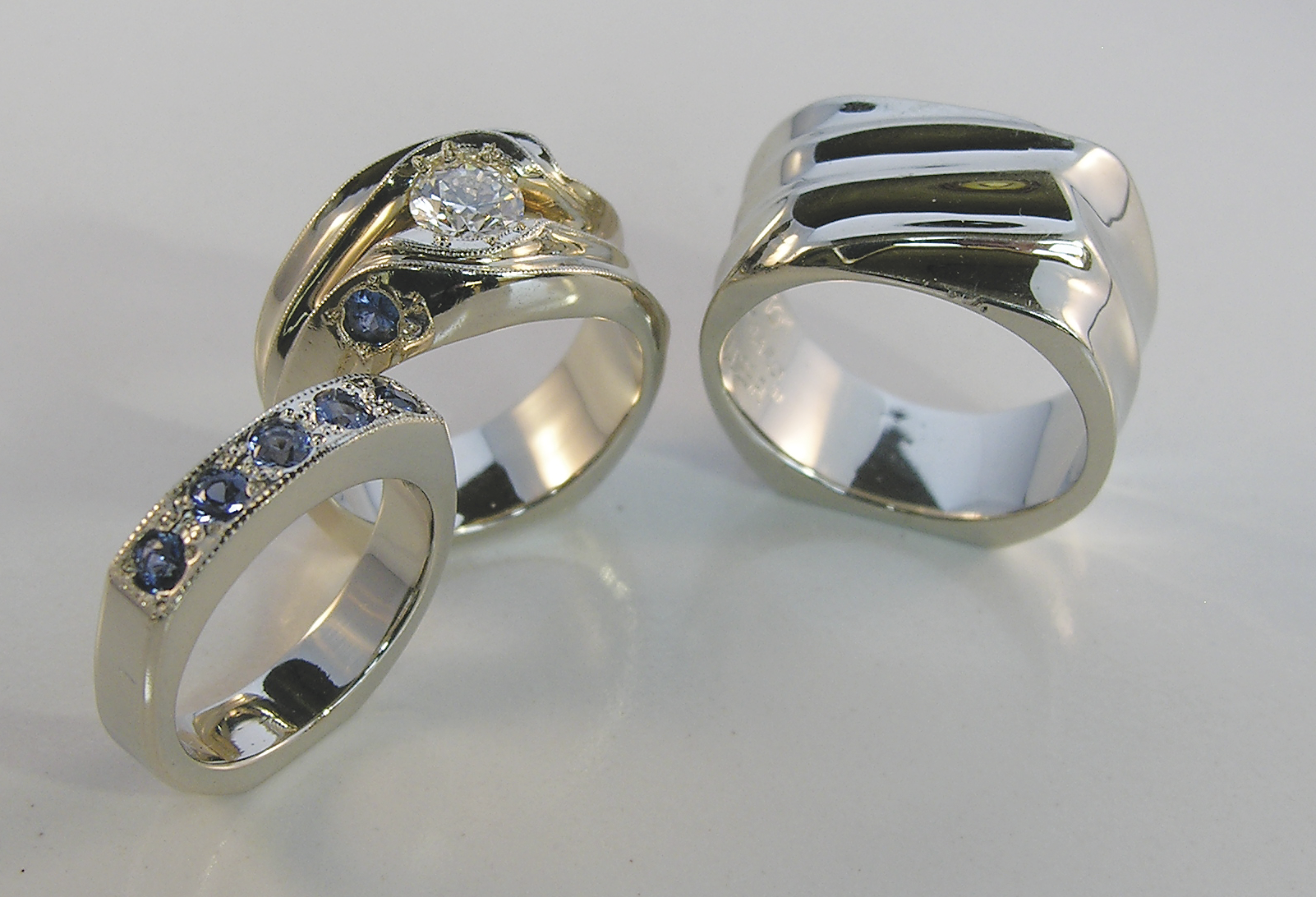 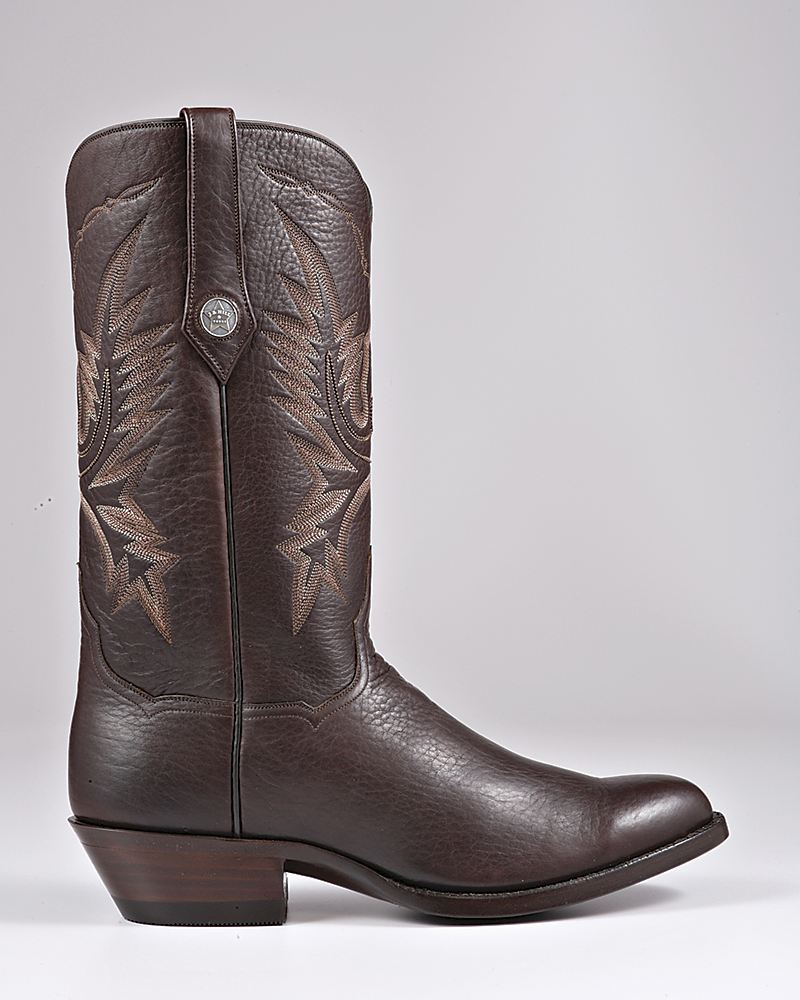 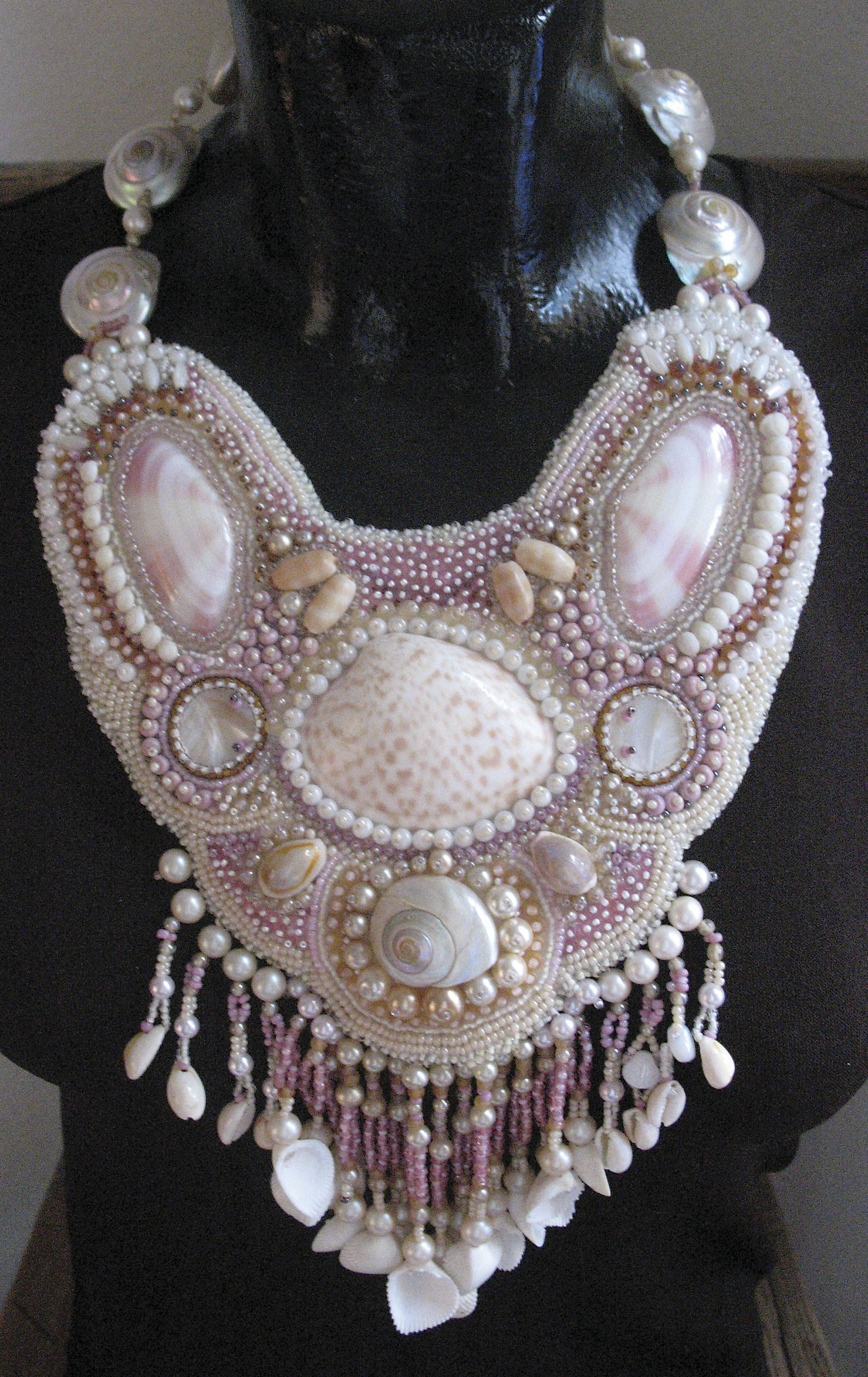 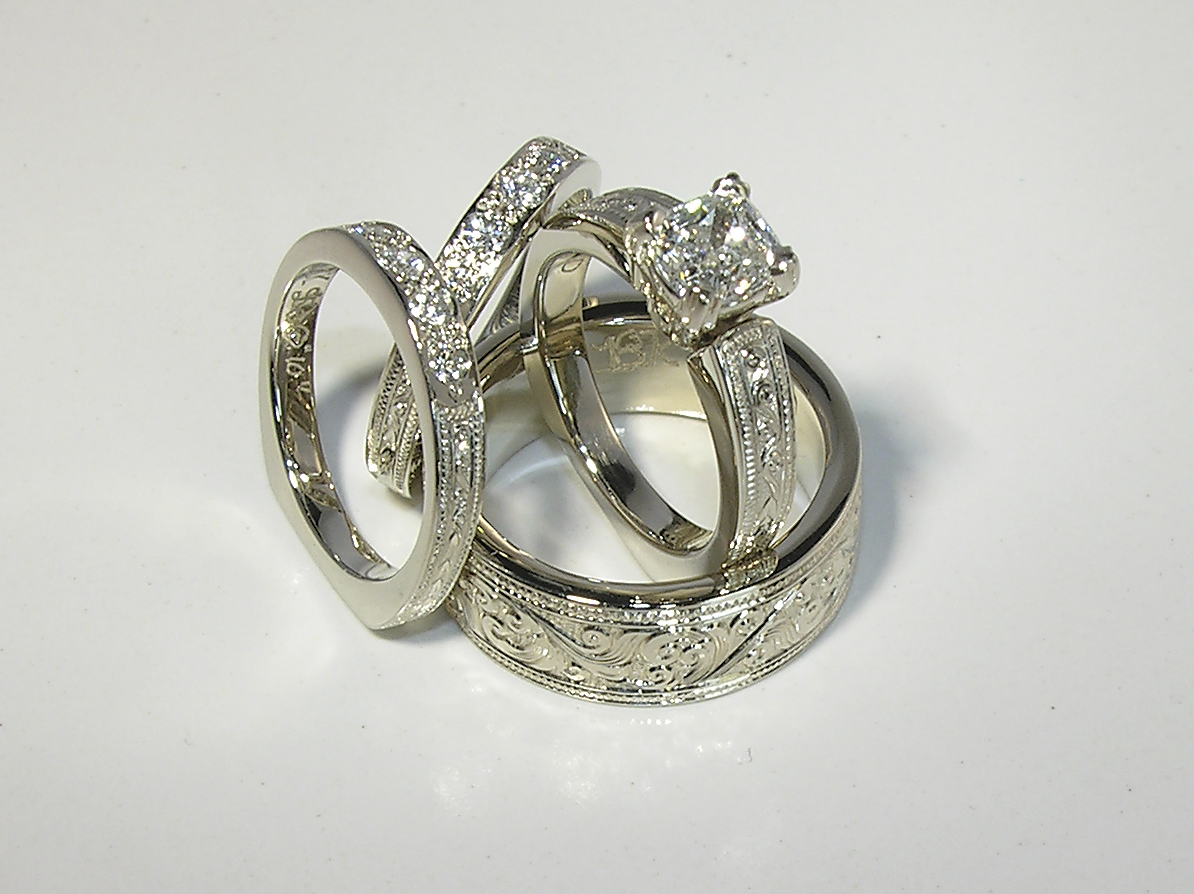 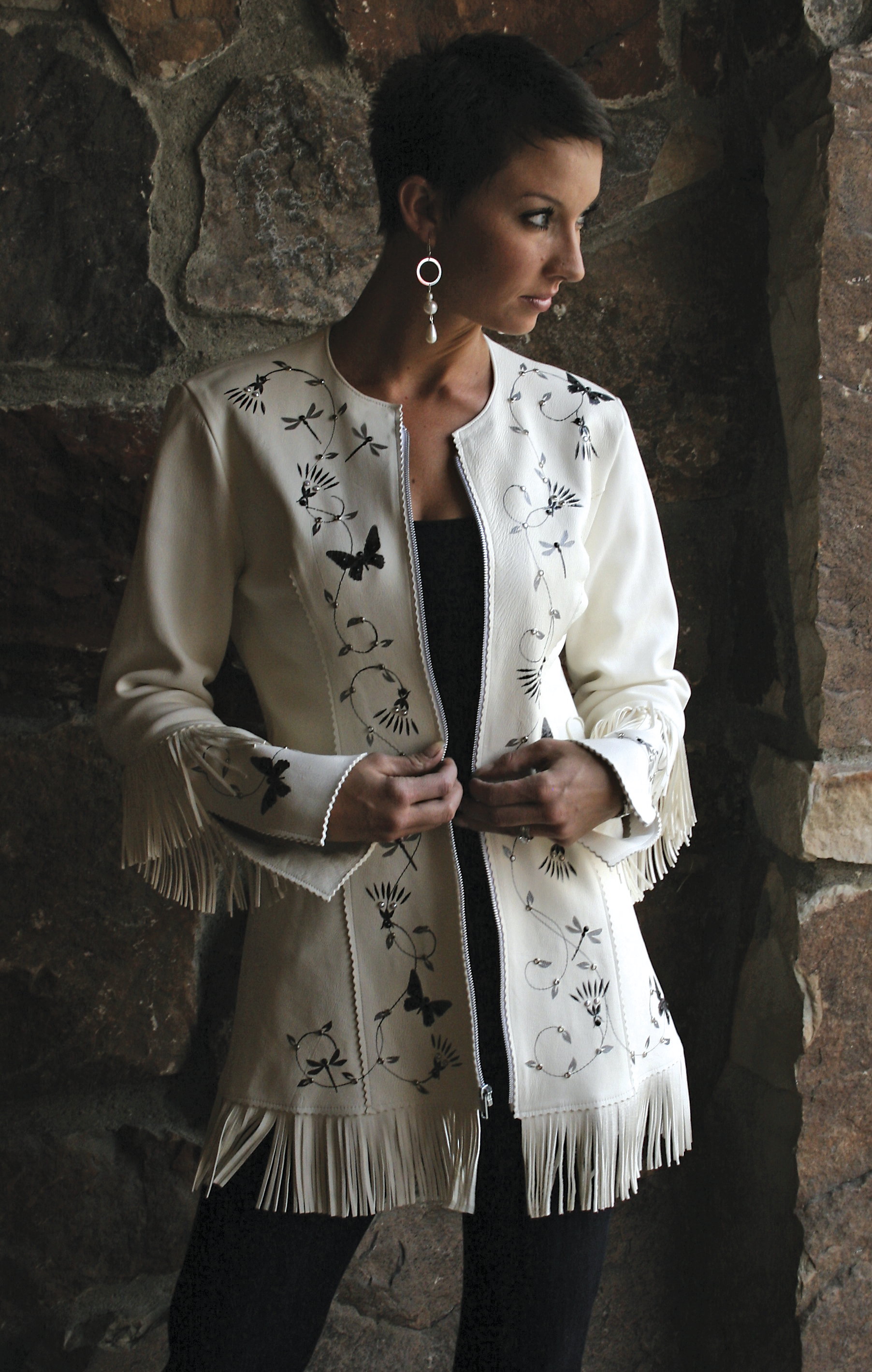 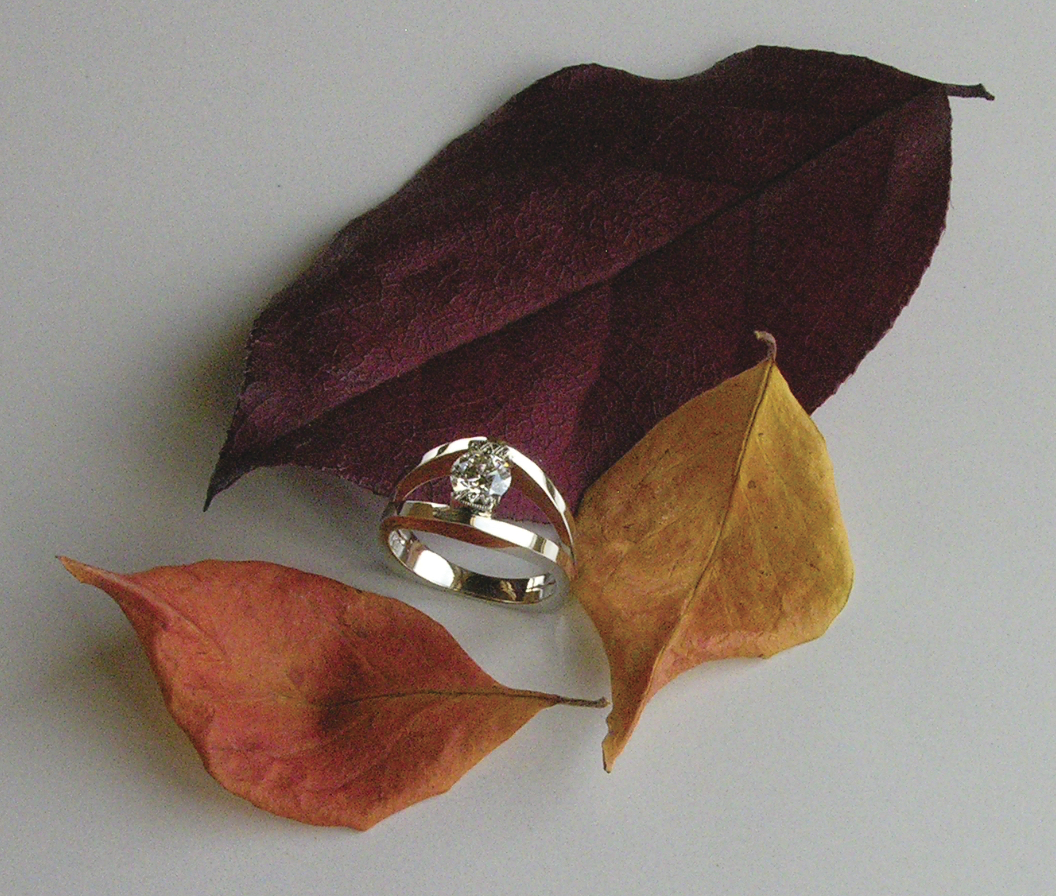 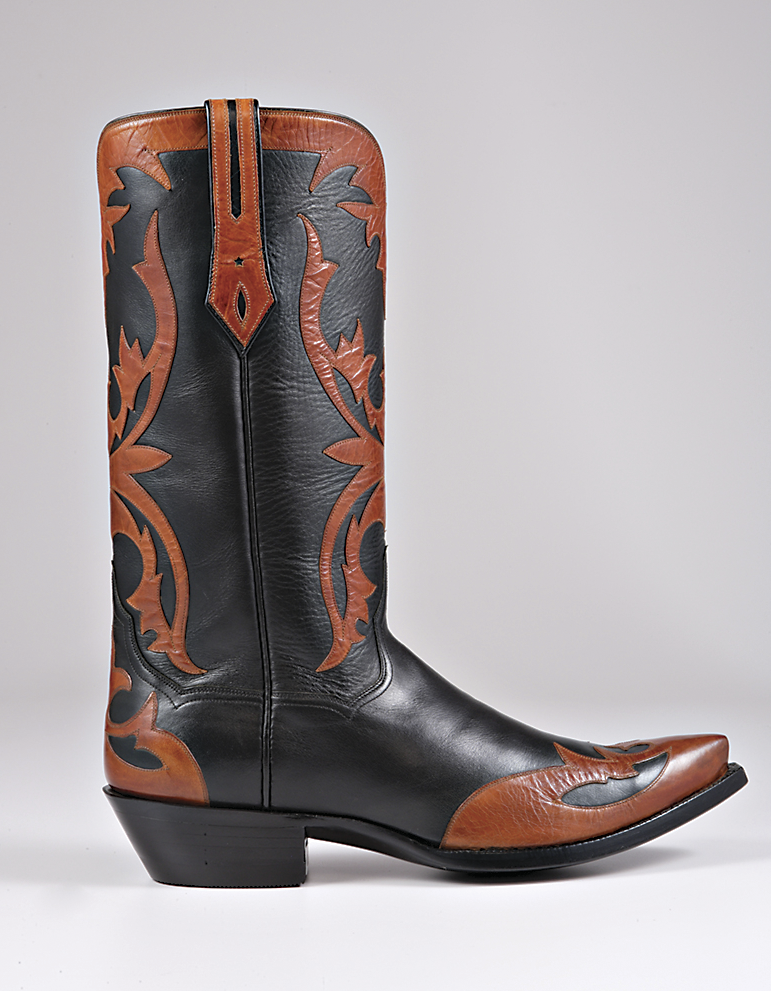 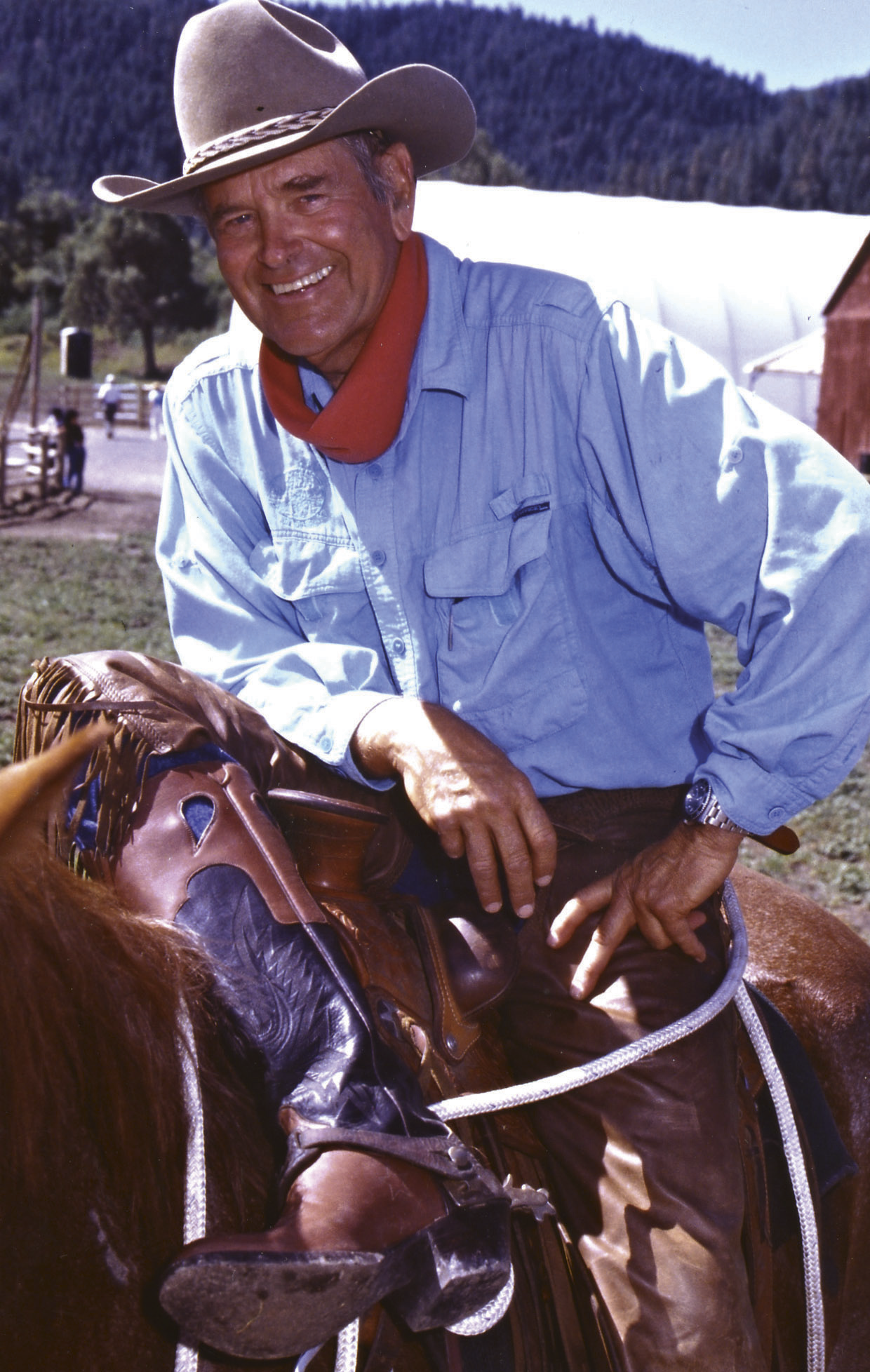