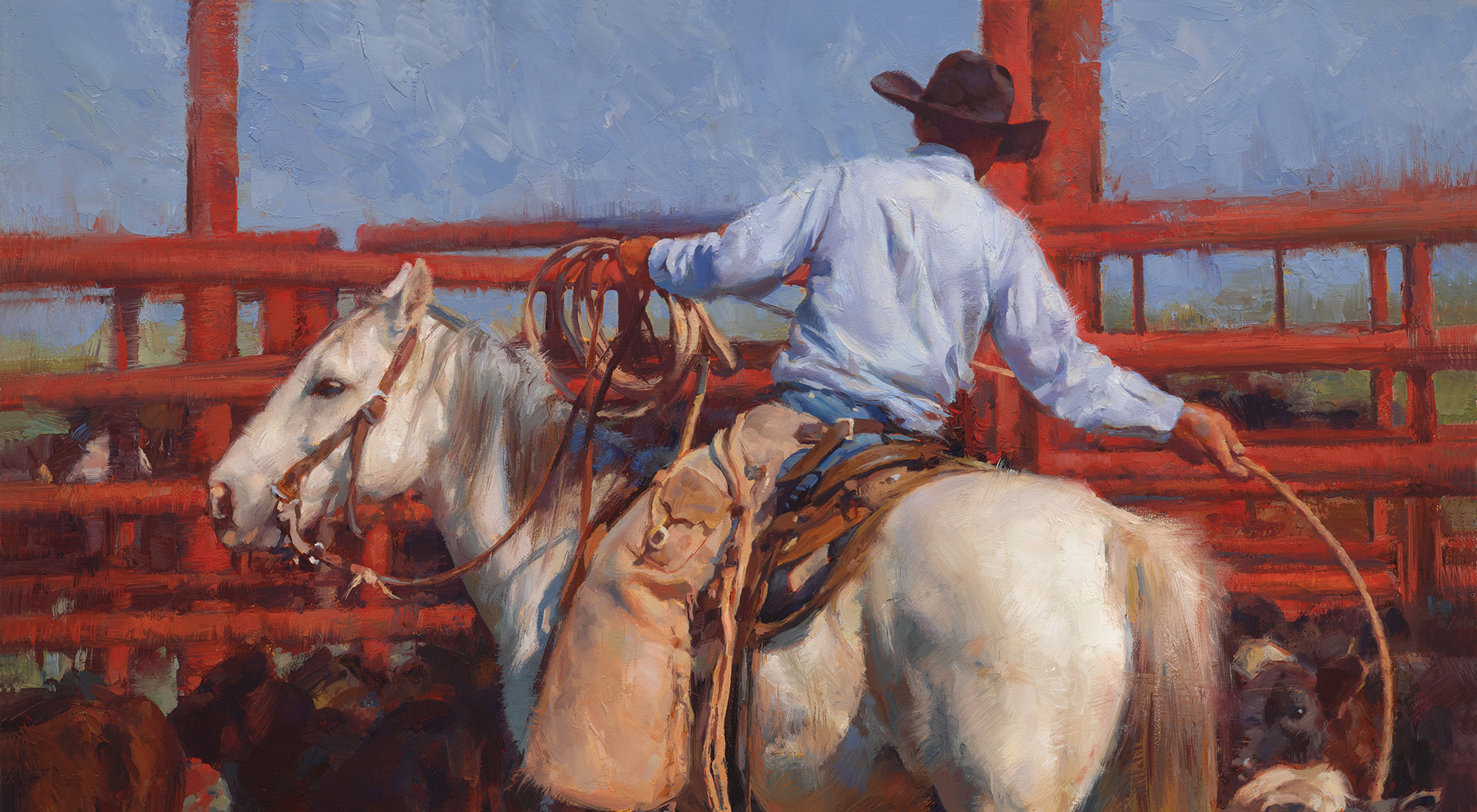 12 Sep At Home on the Range

IT'S BEEN SAID THAT WESTERN PAINTER Frederic Remington wanted these words carved on his tombstone: “He Knew the Horse.” Remington’s wife, aware that she would eventually be lying beside him, apparently vetoed the idea. But the renowned artist’s claim to a thorough understanding of the equine form cannot be denied.

Tom Livesay, executive director of the Briscoe Western Art Museum in San Antonio, Texas, brings up Remington’s would-be epitaph in connection with painter Jason Rich, about whom the same words are also undeniably true — although in the present tense. “Jason really knows horses,” Livesay says, adding a good-natured challenge: “Try to find one of his paintings without a horse. You pretty much can’t do it.”

It’s true. And one reason Rich includes at least one horse in virtually every canvas is that horses have been a central part of his life, all his life. The 46-year-old artist’s exceptional ability to express the feeling and movement of horses and riders is in part the cumulative effect of years of experience in the saddle — engaging muscle and skill through in-the-dust, real-live cowboy work. It also reflects a dedication to careful observation, and the assiduous development of drawing and painting skills over more than 25 years.

Rich’s relationship with both horses and art began on a small ranch in Southern Idaho, where his schoolteacher-father raised horses. Rich spent days at a time on horseback, often working alongside his brothers, cousins and uncle, a range rider in the nearby Wasatch Mountains and Bear Lake Valley. “It was a family affair,” Rich says. “It was the highlight of my summer.”

He also constantly drew horses, starting as soon as he could hold a pencil. As a teen he found himself increasingly pulled toward art, inspired by a high school art teacher who became a mentor. “That’s probably one reason I’m not a professional cowboy,” he muses, speaking in a warm, thoughtful manner. “I always knew deep down that I would do something with the arts.”

After earning an art education degree from Utah State University, Rich taught for a year at his former high school in Preston, Idaho. He enjoyed it but quickly realized he couldn’t make the necessary commitment to both teaching and fine art. He returned to Utah State for a master’s degree. While there, he began building a portfolio, and by the time he graduated in 1998, he had gained gallery representation. His collector base has grown ever since.

“Jason has a good eye and the ability to really capture the moment, which is something not everyone can do,” Livesay remarks. “And he translates that into really beautiful works of art. It’s a phenomenal thing.”

Today, Rich spends his days in the high-ceilinged studio — he prefers to call it a work space — adjoining his home in Northern Utah’s Cache Valley, where he lives with his wife, three teenage children and two horses. Whenever he can, he joins his cousins who work for ranchers in Bear Lake Valley or rides alongside cowboys in other parts of Idaho and Utah. “I don’t consider myself a very good hand,” he says, smiling, “because it doesn’t take me long to end up on the ground looking through a camera.”

Back at the easel, those photographs become reference material for engaging scenes often set in expansive Western landscapes enhanced by artistic imagination. “For me right now, I’m really focused on contrast,” Rich says. Contrast between rich darks and highlights, between thin washes and thick, textured paint, between loose strokes with brush or palette knife and fine details in a tighter representational style. The result is vibrant, glowing color and a sense of drama that arrests the eye.

While much of Rich’s art has a timeless feel — cowboy work hasn’t changed a lot over the years — he sometimes incorporates details that more clearly place a painting in contemporary times; for example, the distinctive red metal corral fencing at the famed Four Sixes Ranch in Texas. Red Rail Catch Pen–6666 Ranch captures the stop-action instant when a mounted cowhand surrounded by milling calves is preparing the loop in his rope. The painting was inspired by Rich’s experiences during the annual Cowboy Artists of America (CAA) trail ride a couple of years ago on the Four Sixes Ranch.

Red Rail is Rich’s catalogue piece for the Cowboy Artists of America’s 51st Annual Sale & Exhibition, which opens on October 14 and runs through November 27 at the National Cowboy & Western Heritage Museum in Oklahoma City. This is his fifth year in the CAA Show. Last year, during the CAA’s 50th anniversary celebration, active CAA members voted to present Rich with the Stetson Award for best overall exhibition.

This honor followed 2013 and 2012 CAA silver medals in oil painting and the 2012 CAA award for Best Portrayal of a Cowboy Subject — some of the many awards Rich has received over the years.

“Jason tells a story in each of his paintings,” notes Susan Patterson, the museum’s curator of special exhibits. “Whether it’s a historic scene or a modern-day roundup, his subjects are never static. Each canvas is filled with movement, capturing the spirit of the moment.”

Indeed, one of Rich’s primary aims is to depict a horse’s most subtle movements or posture in a way that, for those who know horses, clearly suggests what the animal is thinking and reflects the communication passing between rider and horse. “It’s a great compliment for me when I see a real cowboy go through a gallery where my work is and he points out what’s right about the way I’ve painted it,” Rich says.

Behind authenticity of detail is another level of honest reality that Rich appreciates and attempts to convey in his paintings: the values of hard work and deep family bonds that are integral to life connected to the land, whether it’s raising cattle, farming or daily life among early Plains Indians. Rich’s ancestors, members of the Church of Jesus Christ of Latter-day Saints, include pioneer farmers who worked the land with horse teams.

“There’s so much variety in cowboy and Western lifestyle imagery, so many different themes,” he says. “It almost feels limitless to me.” 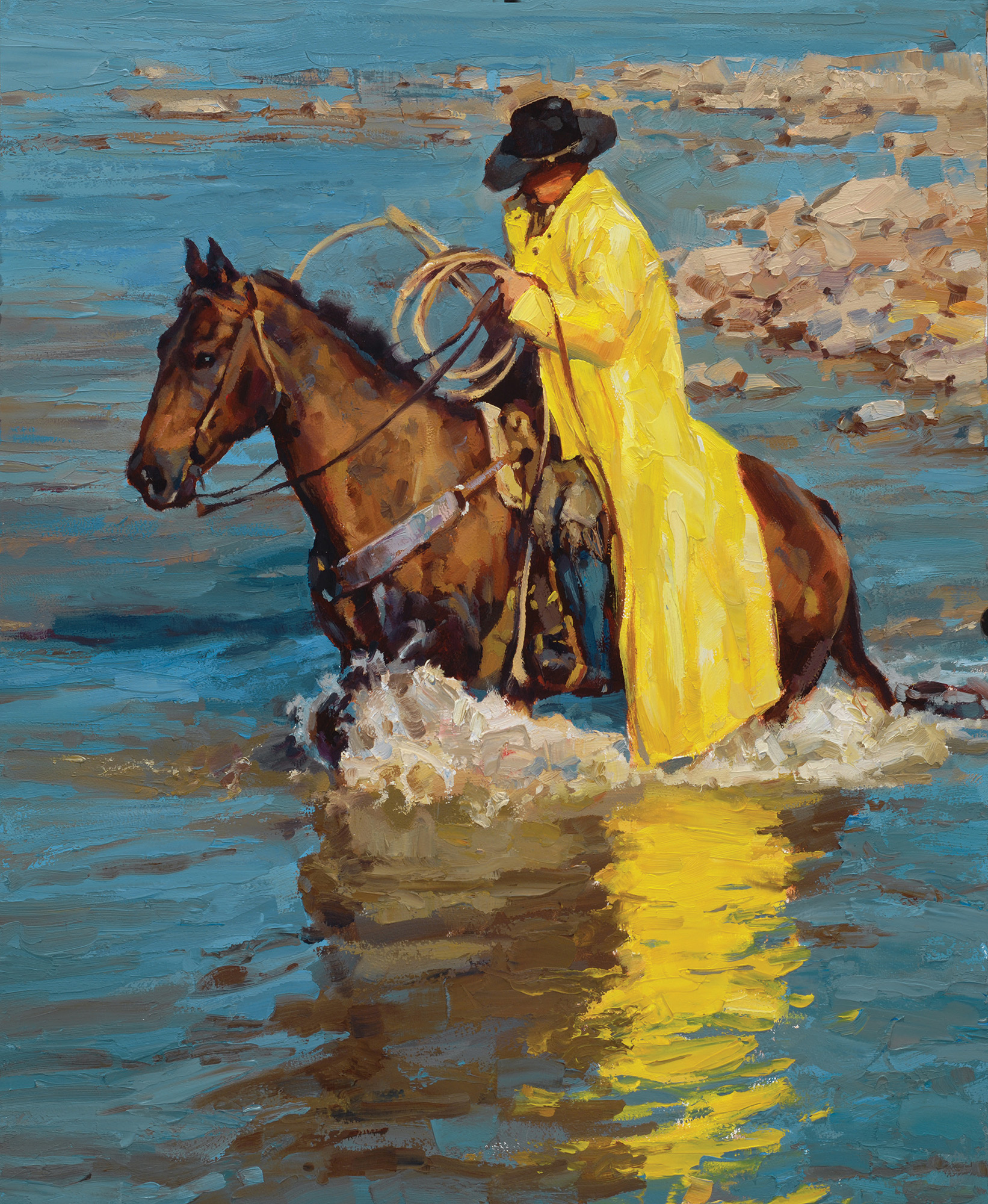