A hacienda in Taos, New Mexico, was designed and built by a painter and his wife

MIGUEL MARTINEZ IS RECOGNIZED BY ART CRITICS AND COLLECTORS alike for his poignant images of women. He describes his subjects as “upright and strong, yet gentle.” And women from around the world inspire the iconic faces in his paintings.

What isn’t recognized about Martinez is how his creativity as an artist permeates his whole life. His home, notably, is considered by many to be like a museum. But to others, it’s a work of art. Beyond the canvas, his house, as well as his hobby of restoring classic cars, is where one can see the artist’s creative reach. 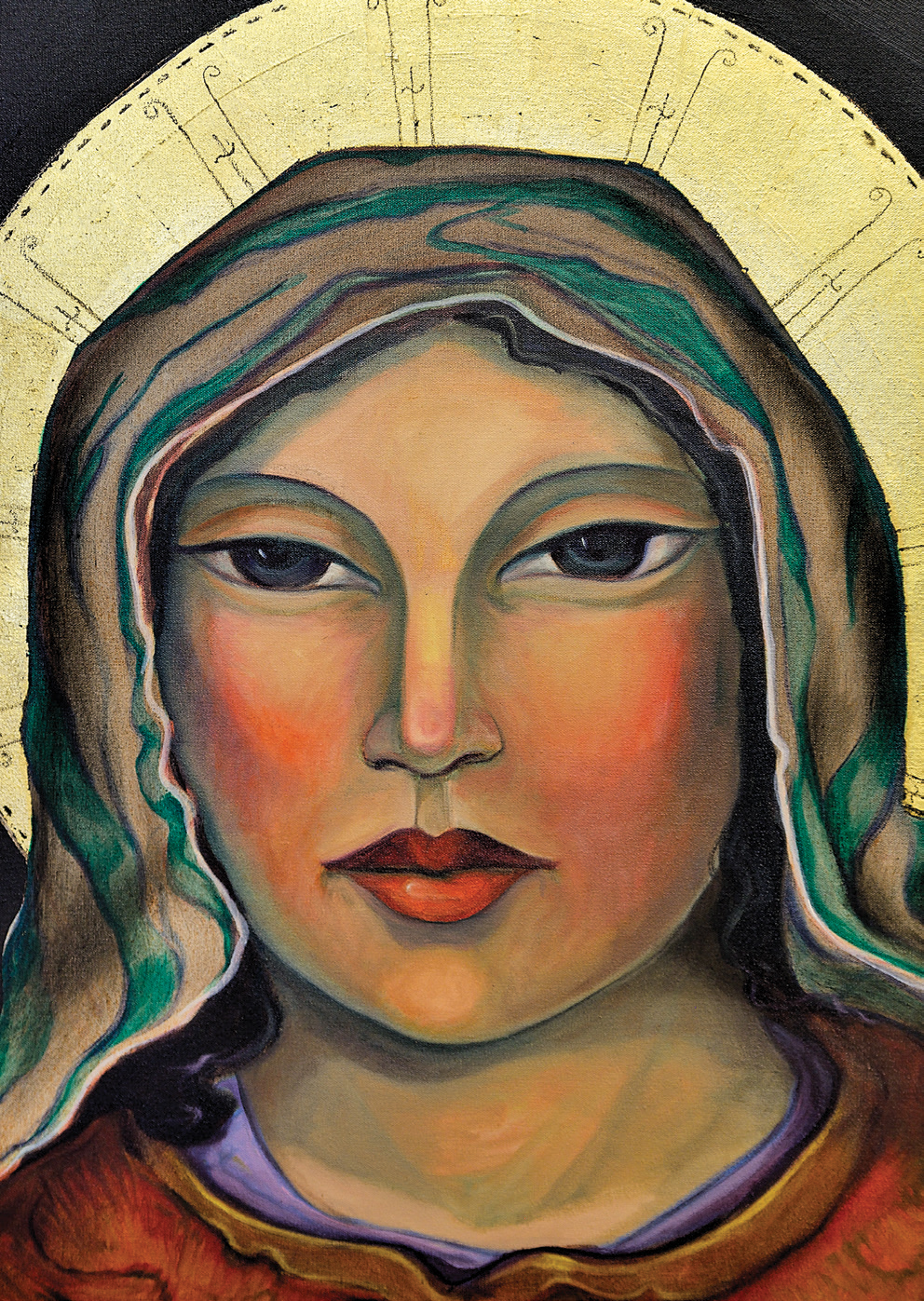 In a work from his Madonna series, Miguel Martinez utilized gold leaf to create a halo in the painting.

A life-long resident of Taos, New Mexico, Martinez and his wife Rita worked together to create a Spanish Colonial home much like the ones early Spanish settlers lived in. An example of this architectural style stands at the Taos Historical Museum. Titled The Hacienda de los Martinez (no relation to the artist), it was built in 1804 of adobe bricks, made from mud and straw, and vigas, large peeled logs used as supports for the roof. Inspired by the exhibit, construction on the artist’s home began in the 1970s, with the first phase completed around 1980. As their family grew, so did the Martinez home, and much like the early settlers of the Southwest, they updated and added on to the original building over time.

One of Martinez’s iconic images painted on Masonite enhances the backsplash over the range.

Located in a gated compound, the home offers 5,000 square feet of living space alongside a separate 3,000-square-foot studio. Martinez recalls the journey from construction to completion. “Rita and I designed and built our home,” he says. “We were the architect, general contractor, and part of the labor force. We both got our hands in the mud laying the adobes.”

Locally harvested timbers were crafted into vigas and latillas for the ceiling.

“We peeled all of the latillas ourselves, day and night,” Rita adds. “Latillas are small saplings that are used between the beams of the ceiling. I was pregnant and would sit on a viga outside, and I peeled and peeled and peeled!”

Just as the builders of the famous Hacienda de los Martinez had done, the couple gathered local materials. “I had a pickup truck in which I hauled adobe bricks and sand,” Martinez says. “The vigas and latillas were harvested from the mountains and canyons around Taos.” 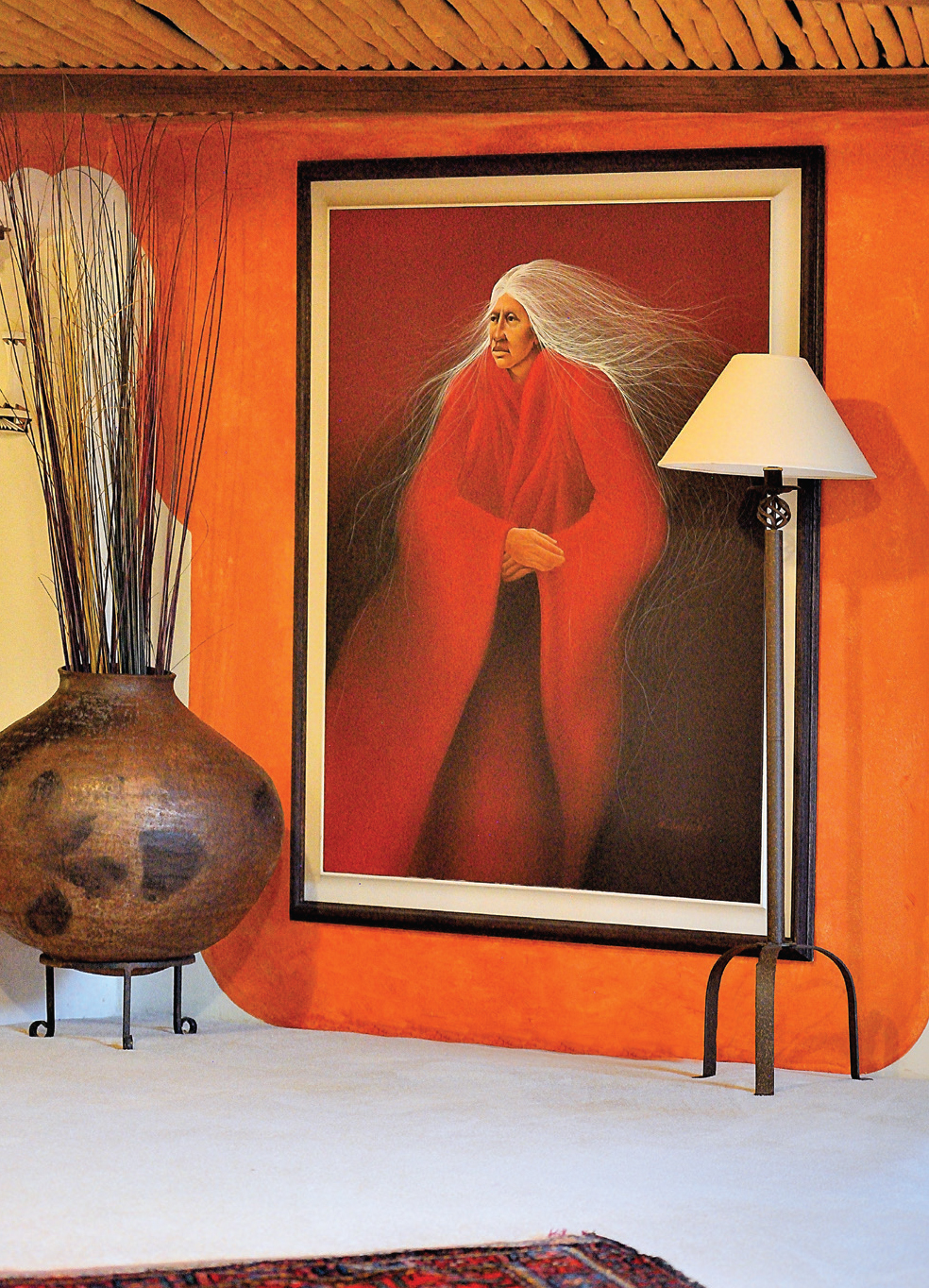 Martinez opted for colorful walls to accent their art collection, which includes this piece by their friend Frank Howell.

Their first design was based on a torreon, a round multi-level structure used in Spain as a watchtower. With a radius of 30 feet, the home’s three stories contain a living room, kitchen, and studio on the main floor, with two bedrooms and a bath on its upper level. The stairway was built from vigas split in half, while the support for the center was built from large rocks gathered in the gorge of the Rio Grande. 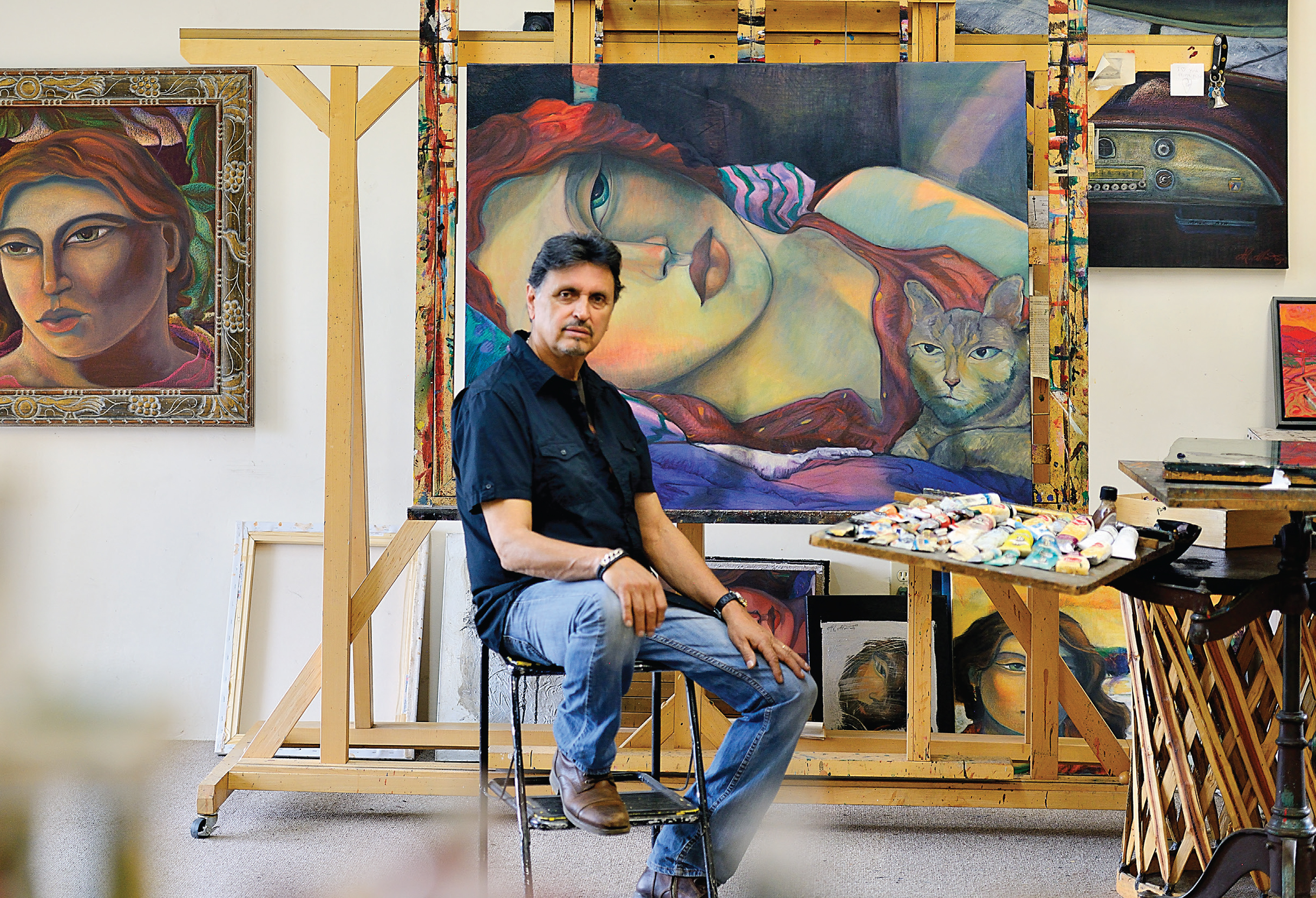 In his studio, with 20-foot ceilings, Martinez paints the relationship between a Madonna and her beloved cat.

The home contains intricately carved doors as well as furnishings by Mark Romero, a local woodworker. Of note is the front door, at 4 feet wide and 4 inches thick, with a center that opens to the outdoors. Romero also gifted the Martinezes with a chest featuring carved rabbits and a giant sunburst. “While most people might leave works of art upon their death, [Romero] wanted us to enjoy the chest while he was still alive,” Martinez says.

When the kitchen in the torreon became too small for their family, Martinez moved his studio to another site on the 3-acre property to allow for expansion. They remodeled the entire downstairs, creating three wings that individually contain a master bedroom, a large living room, and a multi-use room serving as the kitchen, dining, and family room.

A gracefully arched doorway provides the perfect frame for a rare painting of twin Madonnas by Martinez.

There are views of the Sangre de Cristo Mountains from every room in the house. Sunsets are often the most spectacular with the mountains turning a deep red, the color of the “Blood of Christ” as the name indicates.

The couple’s collaborative ideas resulted in a spaciousness that’s perfect for their art collection. There are high ceilings in the living areas, and the walls in Martinez’s studio are 20 feet tall, as are the walls of the nearby garage that houses his vintage cars.

A collection of completed works and those in progress are arranged throughout Martinez’s studio.

“When I was growing up, I admired a 1932 Chevy sedan,” he says. “I never saw it running. It was just sitting next to a garage. Thirty-five years later, Rita surprised me when she bought it for me for Valentine’s Day! I enjoyed putting it together and getting it running.”

Today it has a home side-by-side with other cars, including a flame red 1953 Buick Skylark convertible that the artist fully restored. “My cars are not ‘trailer queens,’” he says. “If I can’t drive them, they are of no use to me.”

The Martinezes’ hacienda has served the family well as a home for their two daughters and their friends as they were growing up. Now, it is a favorite place for the grandchildren. “To them,” Rita says, “it’s a vacation where there’s plenty of room to run and play.”

Visitors say the home is filled with warmth, and that they want to take off their shoes off and relax the minute they walk through the door. “It’s an honor to hear that,” she says. “It truly is a home, a hacienda, where a family has been raised.”