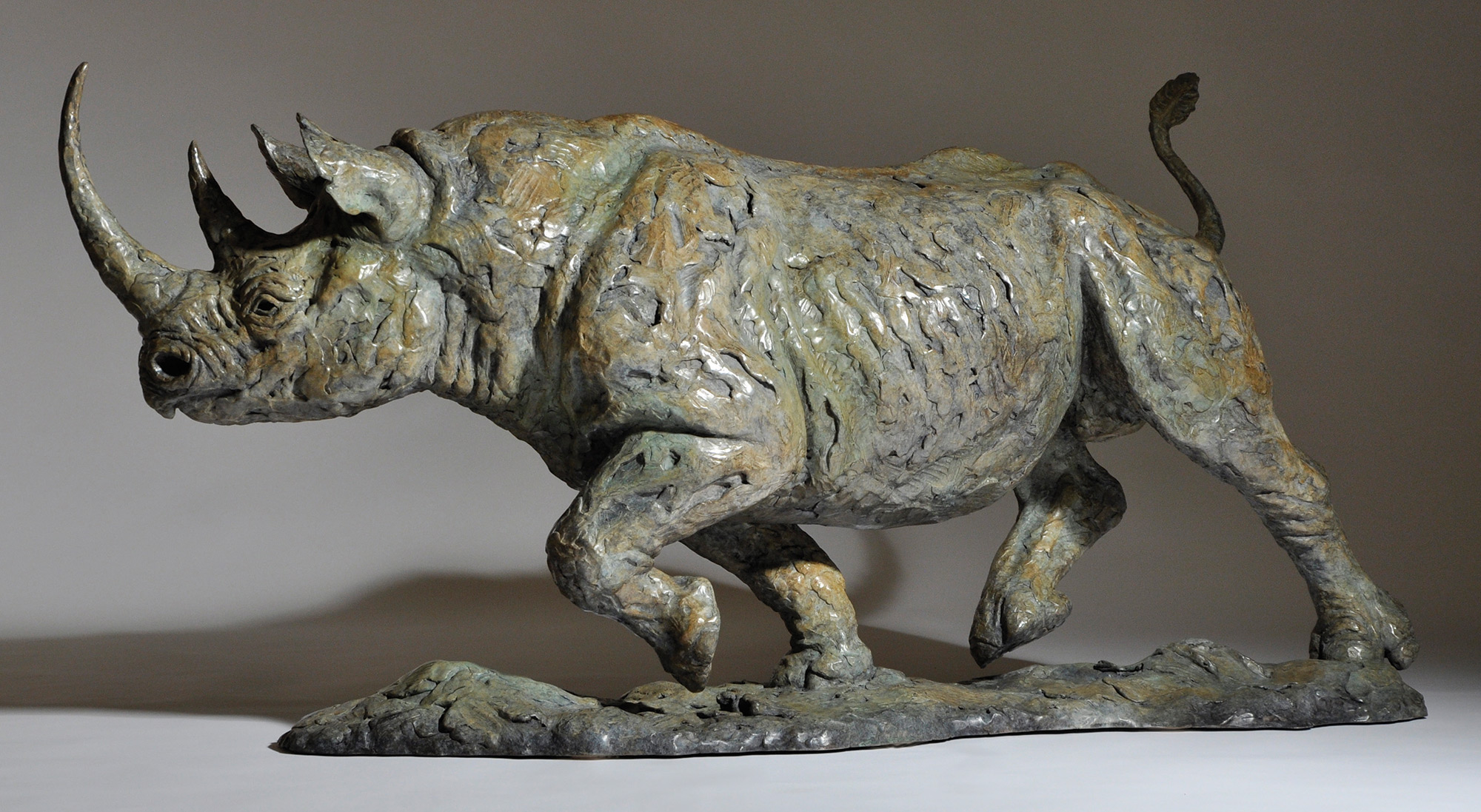 07 Jan Beauty in the Beasts

MICK DOELLINGER HAS BEEN SCULPTING animals for 35 years. “From the time I was a little kid, I’ve been crazy about animals,” he says of the lifelong fascination that fuels his artistic creativity. “I was nuts about dogs, horses, pigeons, ferrets and rabbits — I brought home all sorts of strays. I was kind of extreme and drove my parents nuts!” he laughs.

Doellinger never outgrew his interest in animals. He learned critical aspects of animal anatomy through work as a butcher and then as a sculptor of taxidermy manikins. Today, he combines his technical knowledge of the skeletal composition of animals with a curiosity about creatures of all shapes and sizes to create limited-edition bronze sculptures that give life to the animal kingdom. Doellinger is known for creating a sense of emotion in his bronzes, providing an intimate and often unusual viewpoint of animal behavior and psychology.

“Mick’s compositions make all of his sculptures interesting, whether he’s doing something from Africa or here in North America,” says Tim Taylor, owner of Whistle Pik Galleries in Fredericksburg, Texas. “It can be as simple as a dog sitting or an antelope running, but in all cases he makes it interesting, so you want to look at it. Once you [do], you end up turning it around or walking around it because you want to examine all of it, you don’t just need to glance at it — you need to soak it up.”

One of the reasons Doellinger’s art is so captivating is that he expertly blurs the line between detail and loose texture, letting the mind’s eye fill in the gaps. “The surface texture and how you handle lines is a critical thing in sculpting,” says Doellinger. “Although my work is representational, it has a loose texture. Anatomically, the proportions are there, but I’m not worried about anything exactly. It’s more a combination of anatomy, composition and texture.”

Stuart Johnson, of Settlers West Galleries in Tucson, says Doellinger’s experience and understanding of animal anatomy, combined with his ability to capture movement, set the work apart. “They’re not just a static portrayal of the animal,” says Johnson. “He does action very well and he is able to capture unique poses that many of his contemporaries don’t really catch. He has a good feel for the subject matter and he’s well respected by the people who really know what the animals should look like.”

One of those people is fellow artist Ken Carlson, a leading wildlife painter who has known Doellinger for about 10 years. “Mick is a really creative artist who’s willing to take some risks, which is a breath of fresh air,” says Carlson. “I like the fact that he’s willing to push himself and do some subject matter poses that are not typical. He takes chances, and he’s so good at it. It puts him on another level.”

Carlson says one example of the risk-taking that he admires is Doellinger’s sculpture called Curiosity, which depicts a cougar standing up on its hindquarters like it’s peering over something. “It’s not a typical pose at all,” says Carlson. “A lot of artists take the safe route, and Mick doesn’t do that. It makes him a better artist.”

Doellinger says that in order to effectively capture the movement and emotion of the animals he sculpts, he embodies the essence of the animal while he’s creating it, like an actor getting into character. “When I think about an animal, like a stag or a buffalo, I’m getting into that animal and how he would move, and I can feel the gravity,” he says. “I work out the animal’s anatomy and what I would like to have it doing. Then I work out which muscles would be contracting and expanding with certain movements, and so on. I need to feel it — to act like or pretend to be the animal in my head.”

Doellinger feeds his extensive knowledge of animal physiology, behavior and emotion with frequent trips to study his subjects in their natural habitats, observing wildlife in Wyoming and Montana, or taking photo safaris to Africa or his native Australia. (The artist moved to the U.S. in 2003 and makes his home in Fort Worth, Texas.) It’s an important part of Doellinger’s process, as illustrated in his experience with one of his most recent sculptures, a Cape buffalo piece he named Agitated.

“Before we went to Africa, it was done,” says Doellinger. “But I thought no, we’re going to see buffalo there, so I’ll wait until we come back. And I’m glad I did. I came back and changed lots of things.”

Jessica Elliott, incoming board chair of the Briscoe Western Art Museum in San Antonio, has been following Doellinger since 2008 when she started volunteering for the museum’s signature fundraising event, Night of Artists, in which Doellinger participates. She distinctly remembers a sculpture Doellinger had at the 2015 show called Brute Force. “The way Mick had us position the rhinoceros on the pedestal made it seem to stampede toward you,” she says. “It looked like it was about to charge right off and run you over. It was pretty awesome!”

According to Elliott, Doellinger’s work is a unique addition to the Western art world. “We have a lot of beautiful sculpture at Night of Artists that deals with Native Americans, cowboys and horses … all the things one would associate with Western art. Mick is capable of those things, but he has carved out a niche in the Western art world to include wildlife and exotic animals,” she says. “He really adds another element to these Western art shows and hasn’t limited himself to what we all think of as the big ‘W’ West. He always brings a fun surprise, and his work is absolutely delightful.” 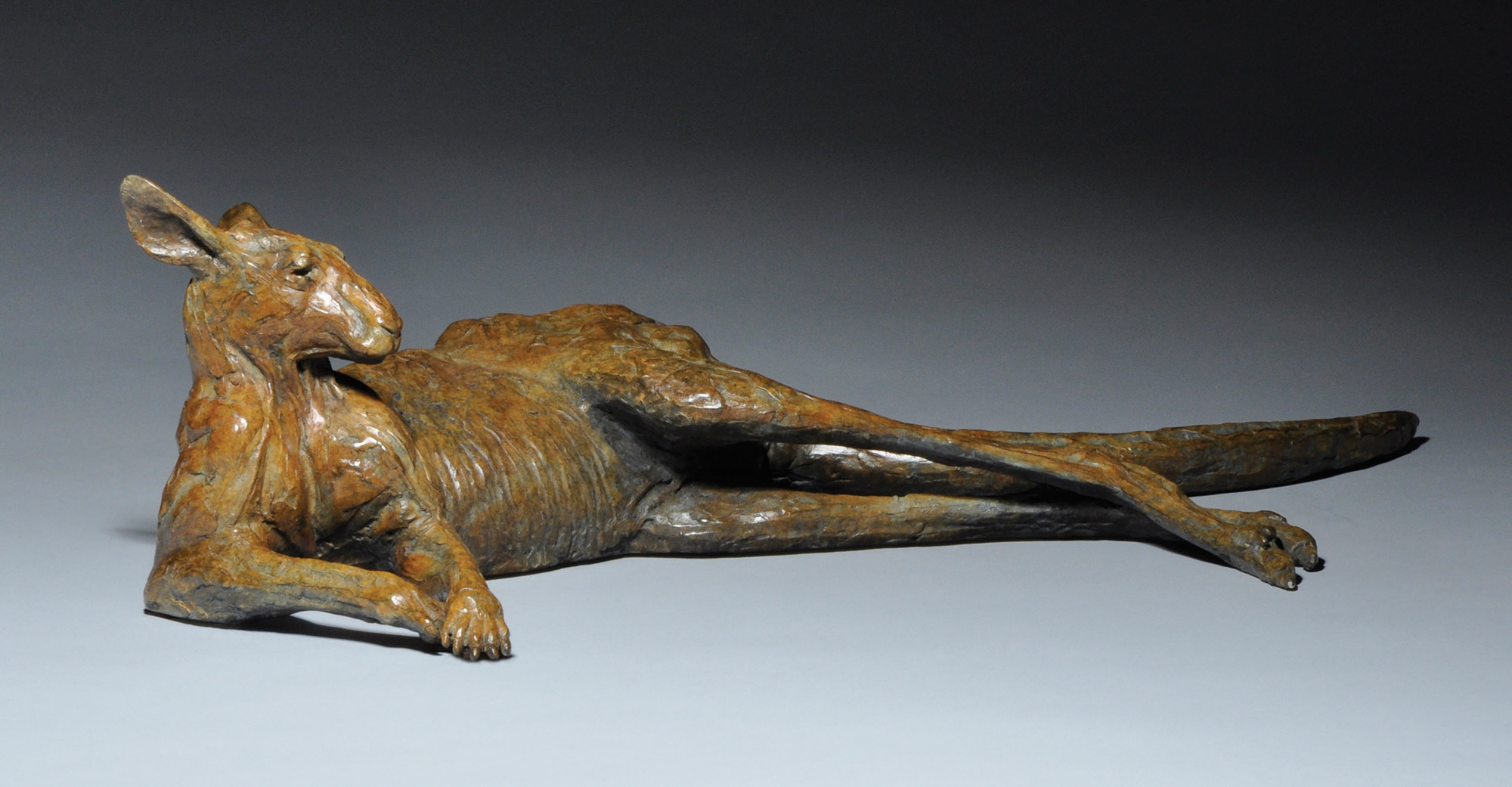 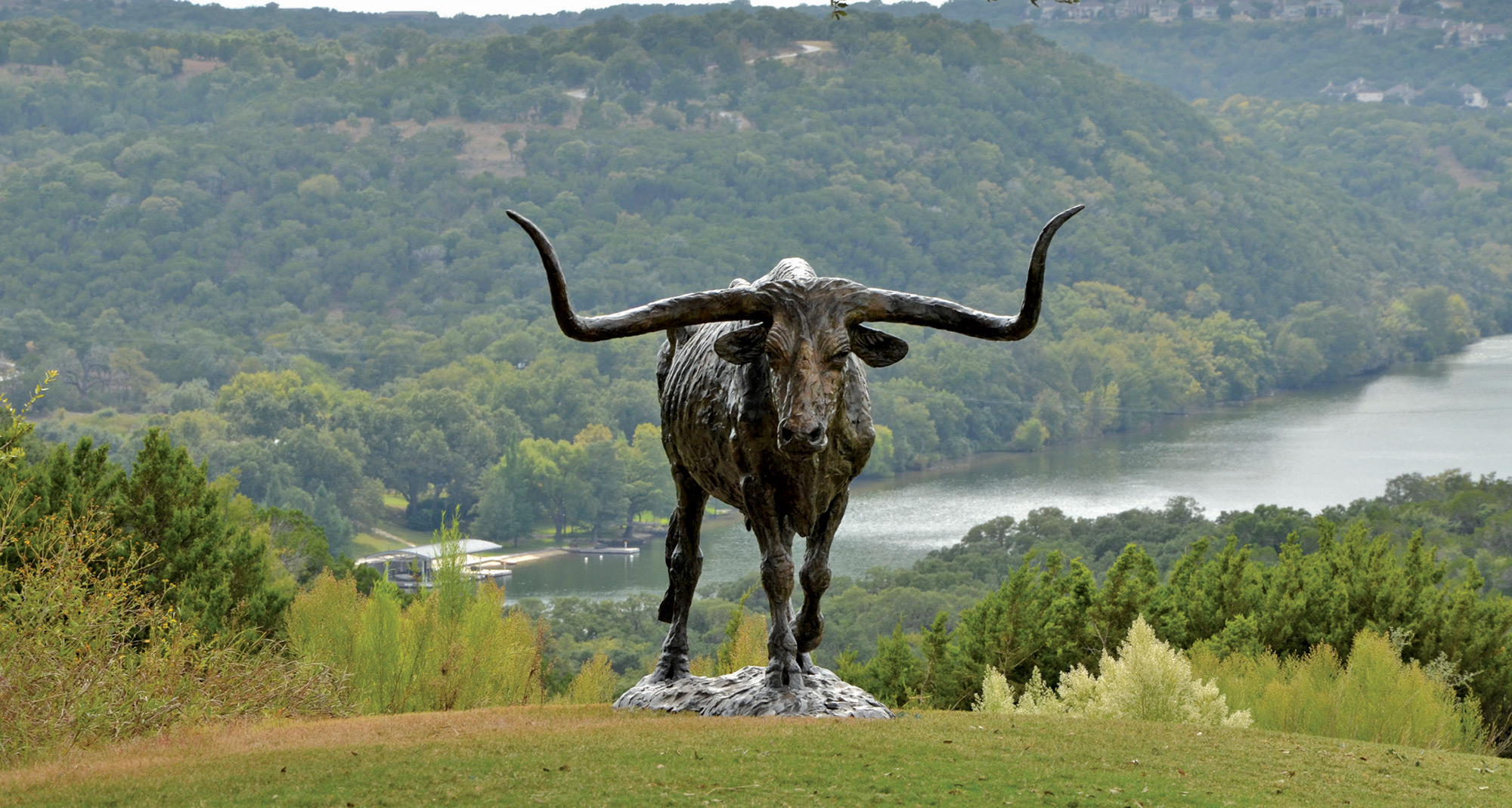 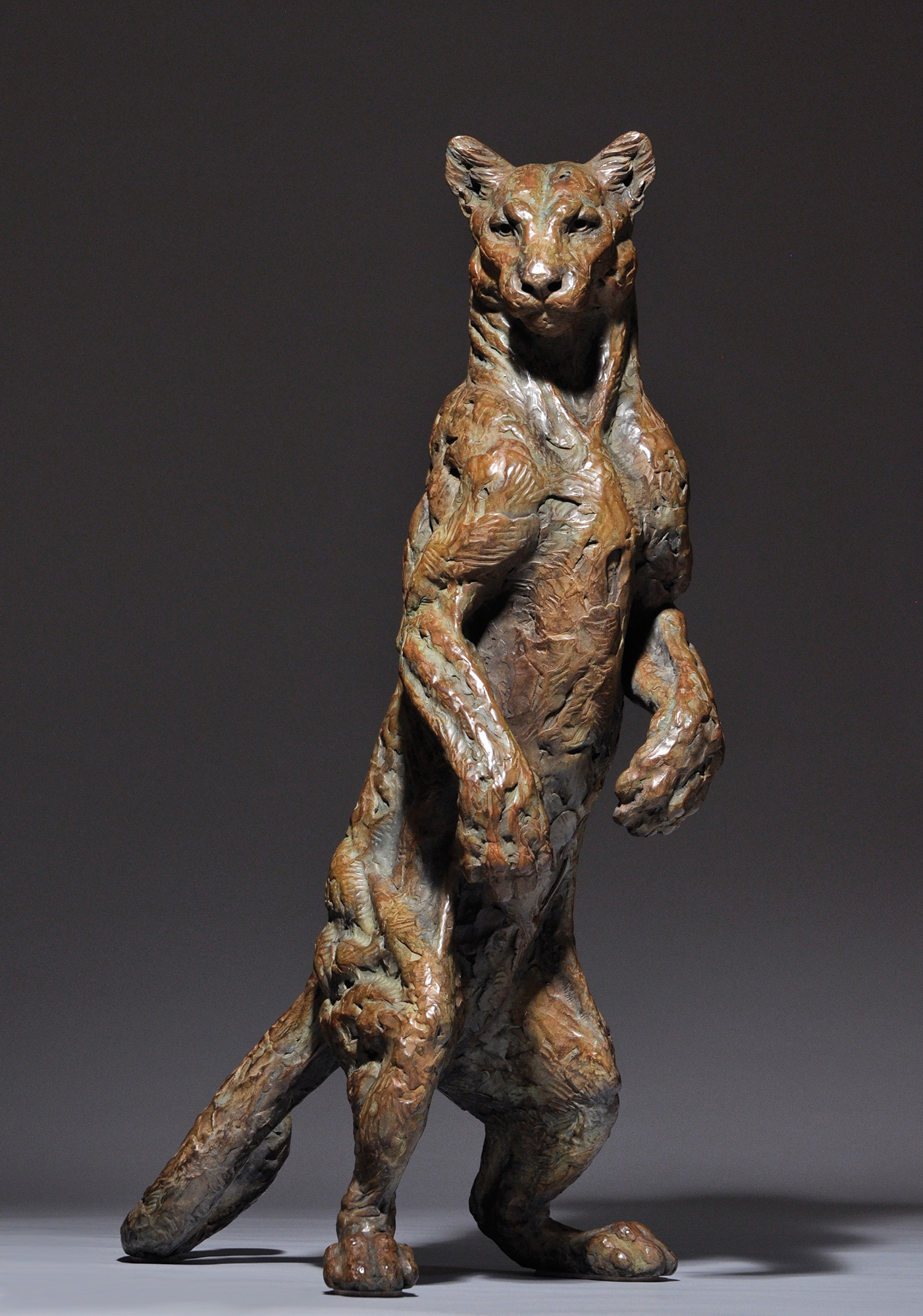 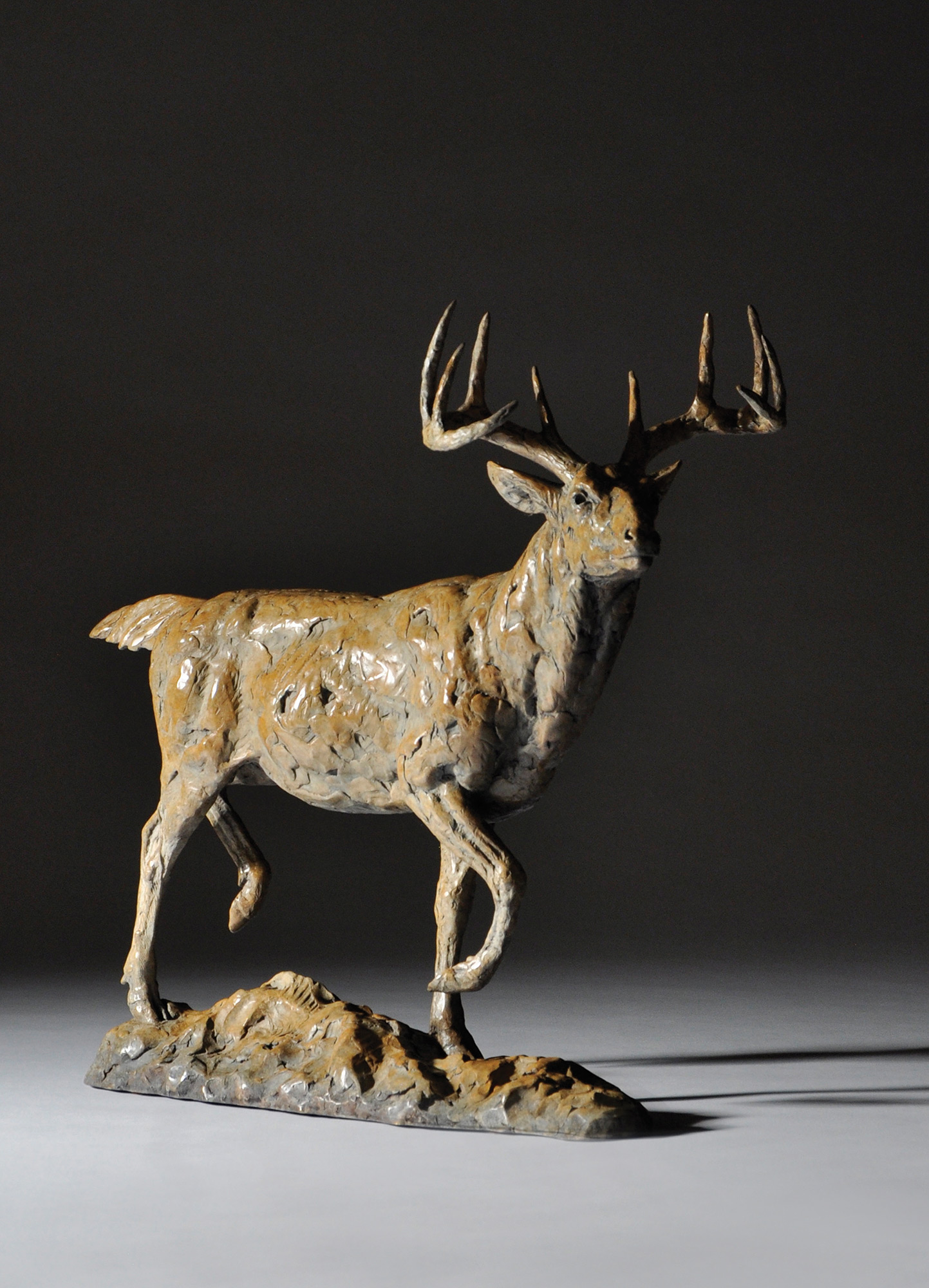 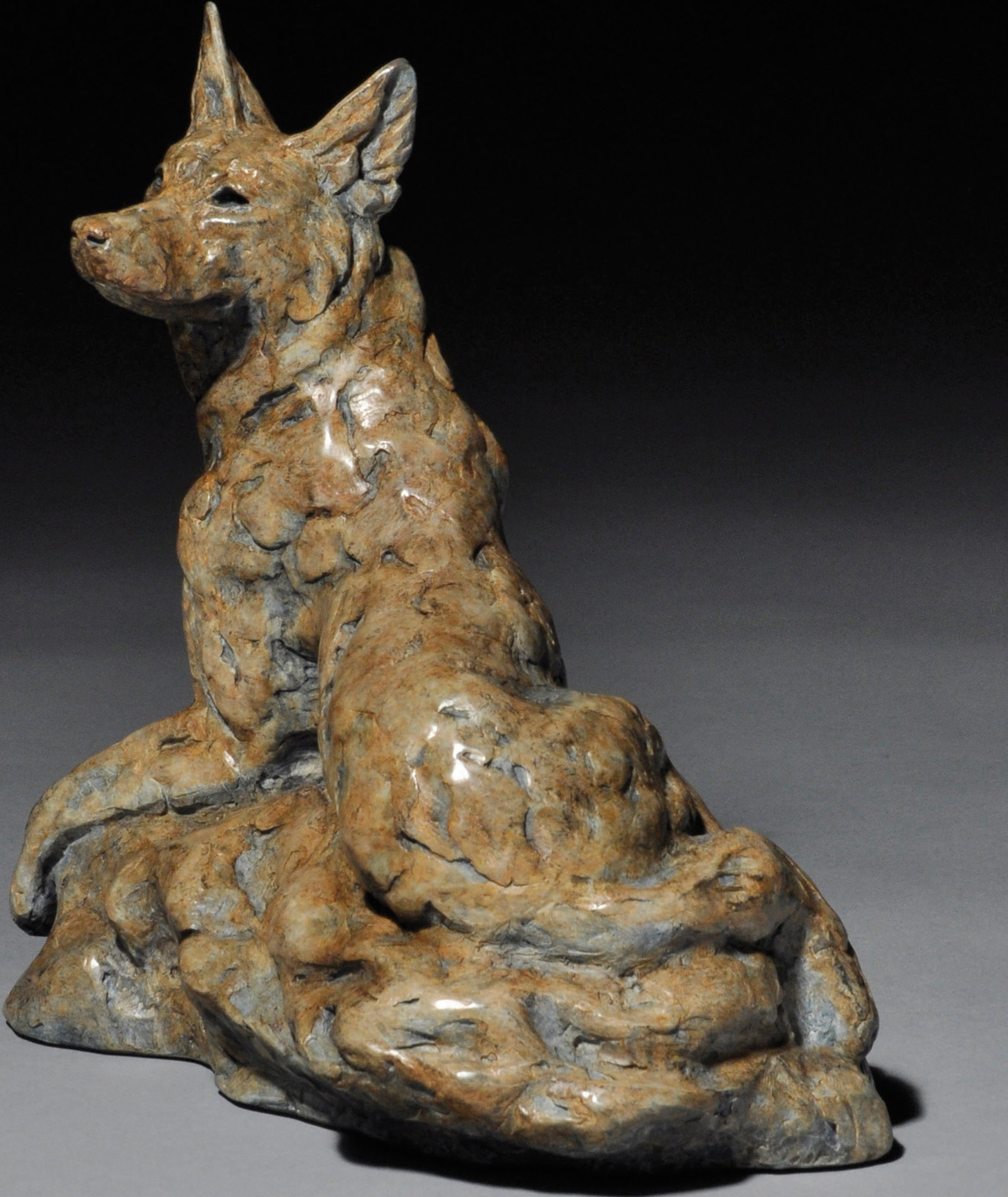