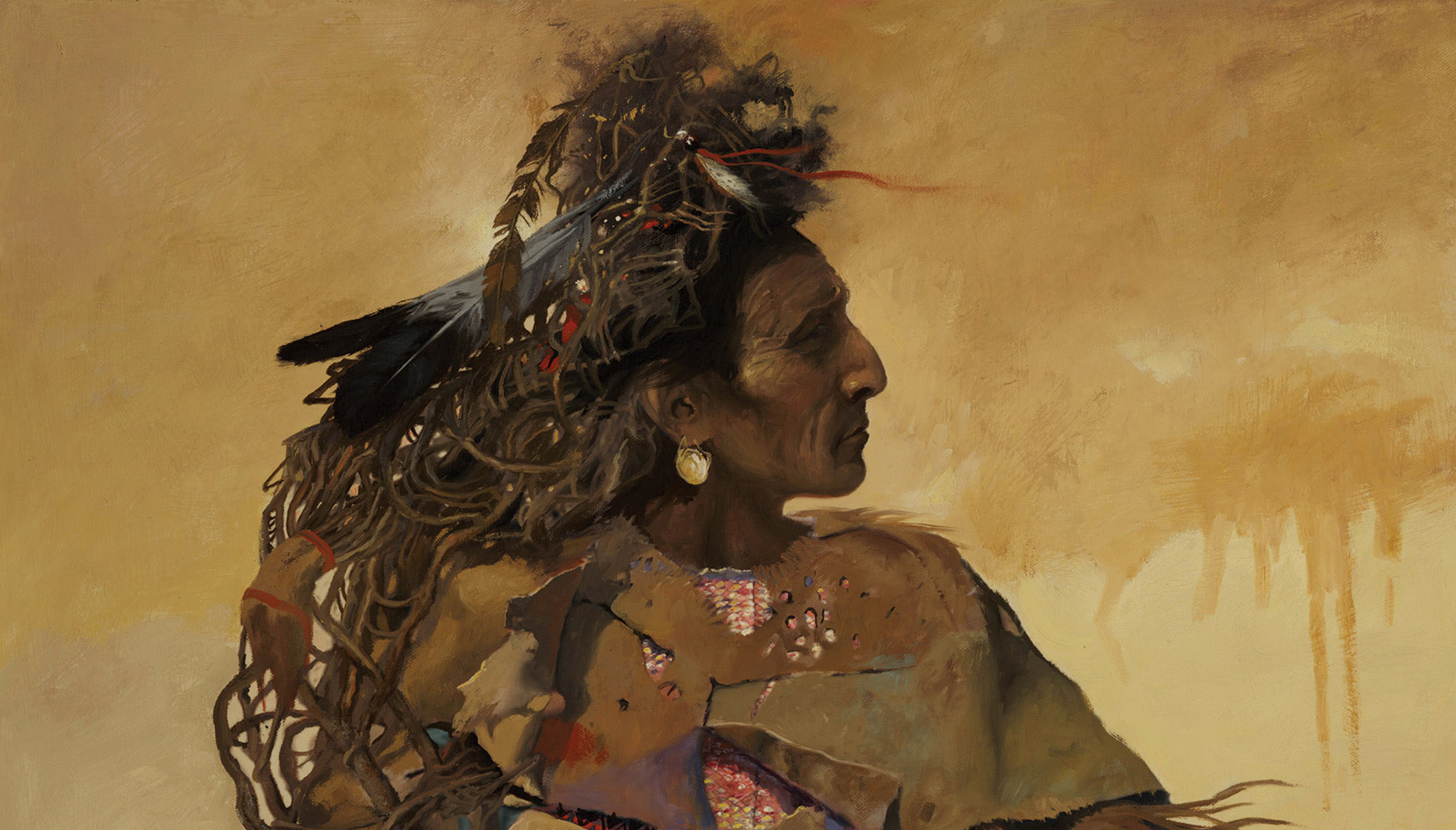 WHEN BRETT JAMES SMITH BEGAN CREATING “Indian pictures,” he gave serious thought to possibly signing the surfaces with a pseudonym. It wasn’t that Smith lacked confidence in unveiling the new works — he hadn’t been more energized in years. He had no hidden agendas and, most certainly, it wasn’t that he wanted to be dissociated with such enigmatic expressions of contemporary Western art.

The real reason: He had no interest in wanting galleries and collectors to instinctively draw comparisons to himself — to the Brett James Smith known as one of the most talented sporting artists of his generation.

In other words, Smith did not want the Indian paintings to ride on his own coattails.

Heralded for his throwback angling narratives, rustic hunting predicament scenes and illustrative depictions of people engaged in all manner of field and stream adventures, Smith’s traditional oil paintings and etchings command the same level of respect that works by Philip R. Goodwin, Frederic Remington and Ogden Pleissner did when those masters of outdoor subject matter were at the top of their games.

You can find Smith’s work adorning the trophy homes of retired corporate executives and the ultramodern dwellings of young dot-comers. In my part of the world — Bozeman, Montana, the fly-fishing capital of America — there aren’t many art-collecting trout mavens who don’t revere Smith.

Brad Richardson, owner of Legacy Galleries, says that at his outlets in Scottsdale, Arizona; Jackson, Wyoming; and Bozeman, Montana, the challenge with Smith’s sporting art remains one of supply being unable to keep up with demand. Richardson acknowledges that, at first, he was tepid to Smith’s talk of making a bold transgenre move. After all, Richardson has witnessed many artists over the years who depart from their forte in order to pursue other directions yet lose the power and vision they possessed while in the groove.

Smith will tell you that as good as things have been, he felt as if he needed to get out of a rut.

Those who are able to seamlessly cross boundaries and push genres are extraordinary — and Richardson puts Smith in that category. Perhaps the best example of someone else who did it well is Frank W. Benson, a legendary sporting artist, who today has a more vaunted place in art history as a member of “The Ten” who ushered forth American Impressionism at the turn of the 20th century. Benson’s hunting and fishing scenes are treasured, but his Impressionistic easel paintings are part of major museum and private collections.

“Brett is being true to himself and it’s a mistake if an artist isn’t pursuing the inner calling that keeps him fired up,” Richardson says. “There’s been this area he’s needed to explore and now you see him in the middle of it.”

In March 2016, Legacy is hosting its annual large group show in Scottsdale and Richardson has asked Smith to submit a couple of his Indian pieces. He predicts collectors will greet them with enthusiasm.

Born in 1958, Smith divides his time between winter months near New Orleans — he carries a bayou accent on the tongue — and a cabin, during summer, in the mountains south of Montana’s Yaak Valley. Once upon a time, he was a commercial illustrator in New York City, the last of his breed to have paintings adorn the covers of magazines and as fodder for magazine illustrations. By his fine art education, his knowledge of art history and travel throughout the region, he has been exposed to a lot of Western art. None of the traditional approaches to motif appealed to him.

Smith isn’t walking away from sporting art; far from it, he’s merely crossing a divide. To suggest that he has been dissatisfied with the current state of Western art is an understatement, but he is hardly alone.

Smith doesn’t channel his frustration toward particular painters. Instead, Western art, he says, has been locked into a way of thinking about interpreting the West and its people. It is risk averse and, as a result, young people have been slow to warm.

Smith’s response is the paintings before us — bold, striking celebrations of elemental indigenousness, reflected in portraits of people whose cultures on this continent evolved over millennia. He finds few things more resonant than the power of native human archetypes that bring us closer to having connections with the land. Neither sentimental, over romanticized or photorealistic, Smith’s Indian paintings are first and foremost dazzling human portraits.

“The transition from traditional painting to the more modern abstract unconventional style is not without trepidation,” Smith says. “Mastering the mechanics of painting is one thing. It’s a much greater challenge to change the way you think or think in a way that is alien to the traditional art market.”

With Smith’s foray into Western art, he is anything but “traditional.” If one were to, say, contrast his Indian paintings with those by George Catlin, Joseph Henry Sharp of the Taos school, Howard Terpning, Martin Grelle and the late Kenneth Riley, Smith says he admires their talents immensely but has no desire to have them serve as reference points. He isn’t reacting against their works or casting aspersions; rather he is interpreting the iconography of native people in his own way, one that’s not based upon whether he gets every detail right. He wants viewers to feel a tingling mood, to have their emotions summoned and provoked, instead of being told a story.

“Abandoning the constraints of conventionalism I attempt to create pictures that inspire thought,” he says. “There is great freedom in making pictures that are not bound by reality or a planned progression in a design. I start with a small sketch, working out a simple composition around which will revolve the colors and shades that are the fluid and the unplanned.”

Black Leather is a striking engagement of abstracted color, converging patterns and flow of forms. Sophisticated on the one hand, it also asserts Smith’s confidence with improvisation, allowing a painting to shape shift or even tilt from horizontal to vertical. Speaking of its evolution, Smith says it originated with the outline of a bison.

“Although difficult to see, the shape drove the design until other visual elements supplanted the original composition,” he explains. “Turned to the right 80 degrees, the organic bramble and layers of leather create the overall shape, but once the design took hold I tended to forget the initial impulse of the static focal point and let elements of subtle color and symbols drive the execution.”

His intent, he says, was to keep the palette influenced by the color of smoked canvas while building a shape grounded by organic components. Viewers encounter the piece and their first response is that it’s driven by brighter colors, and then they realize Smith has delivered an engaging illusion.

While his paintings appear driven by subject, they really are, more technically speaking, attempts to push his understanding of color, to work in lower key, exploring contrasts and value combinations, striving to achieve harmony while testing the limits of light and shadow. He wants us to wander through the work and not find a place to pause. He’s making no attempt to satisfy the interpretations of the viewer.

“Paintings that answer questions become illustrations,” he says. “My attempt is not to interpret history or record it, but create paintings that leave questions unanswered. There should always be some mystery behind the artist’s intent. I don’t want my intent to be graphically obvious.”

With Victory, his palette turns brighter, though important to notice is how texture drives motion. “The horse actually was never intended to be there in the original concept, but once there, it became the inertia for the surrounding design,” he says. “My decision to use pastel color, contrasting with the earthy hues of leather, was to lay it over the texture of flowing fabric. My initial intent was to create a texture similar to sand rivulets flowing in randomly directional patterns.”

Maybe the most insightful observation has come from Smith’s father, who, as an octogenarian, has watched his son mature as an artist for 35 years. He said Smith’s paintings work on a couple of different levels because of the archetypal content, replete with ancient symbolism, and color schemes not typically associated with cowboy pictures. Smith appreciates the distinctions between tribes, but the richness of subject matter emanates from North America being a mixing zone between native peoples, sharing through trade stories, objects, wares and ultimately a common holistic reverence for nature. America is regarded as a melting pot for its immigrants, but Smith notes the phenomenon was already alive and well before Columbus.

Back in the 1990s, when he operated a gallery in Bozeman, Montana, Curtis Tierney was one of Smith’s greatest early champions. He watched as differing aspects of the West began percolating deeper into Smith’s psyche and knew it would erupt to the surface. Today, Tierney is a fine art broker, consultant and an avid Smith collector.

“It wasn’t a complete surprise to me that he waded into the Western genre, but these paintings are not classically Western — at least for how native portraits have historically been presented,” he says. “They have flairs of contemporary and abstract elements.”

Tierney saw Smith’s first Indian piece and then four more. “To put it mildly, I was blown away by how well executed they were as well as being visually exciting. It was very evident that he had put a great amount of time, thought and effort into each one.”

There is a lot going on in Smith’s head that matches what he endeavors to reveal in the finished surface. Few have been mapped out. He paints instinctively, pulling from the accumulated knowledge he has acquired reaching all the way back to his beginnings as a commercial illustrator.

Sun Bird began as a study of the color red, he says. “The blanket color became the center of my creative attention. As the painting progressed, the eagle was added and asserted itself as a focal point.” He notes that he made several design decisions along the way, refusing to let impatience drive decisions. “These paintings are an exercise in the discipline of recognizing when a painting is deficient and not rushing to a declaration of completion,” he says.

The work, Canoe and Moonlight, was inspired by seeing Alphonse Mucha’s painting of Joan of Arc in the Metropolitan Museum of Art. He set out to create a vertical design framed by a surreal landscape. Surprisingly, perhaps, he turned it into a nocturne as an afterthought. “The lighting conveniently played into the juxtaposed warmth on the outer perimeter and the cooler moonlight in the center of the composition. Relying on the painted realism of the Native American in the birch-bark canoe, that goal then became a way to introduce color and a sense of quiet solitude.”

When we spoke, Smith was finishing several new sporting pieces that he was delivering to a show in Charleston. But he couldn’t wait to clear the palette and sing even stronger with his own authentic voice.

“When Johnny Cash got up on stage and sang ‘Folsom Prison Blues,’ it was daring and risky and different from what he had done before,” Tierney says. “No one on the planet could have replicated that — and it was in some ways a departure, yet it only strengthened our appreciation for Johnny Cash the artist. This is what Brett’s doing with his artwork, offering us a much fuller range.” It’s a unforgettable genre-crossing perspective, he adds, united by a single painter. 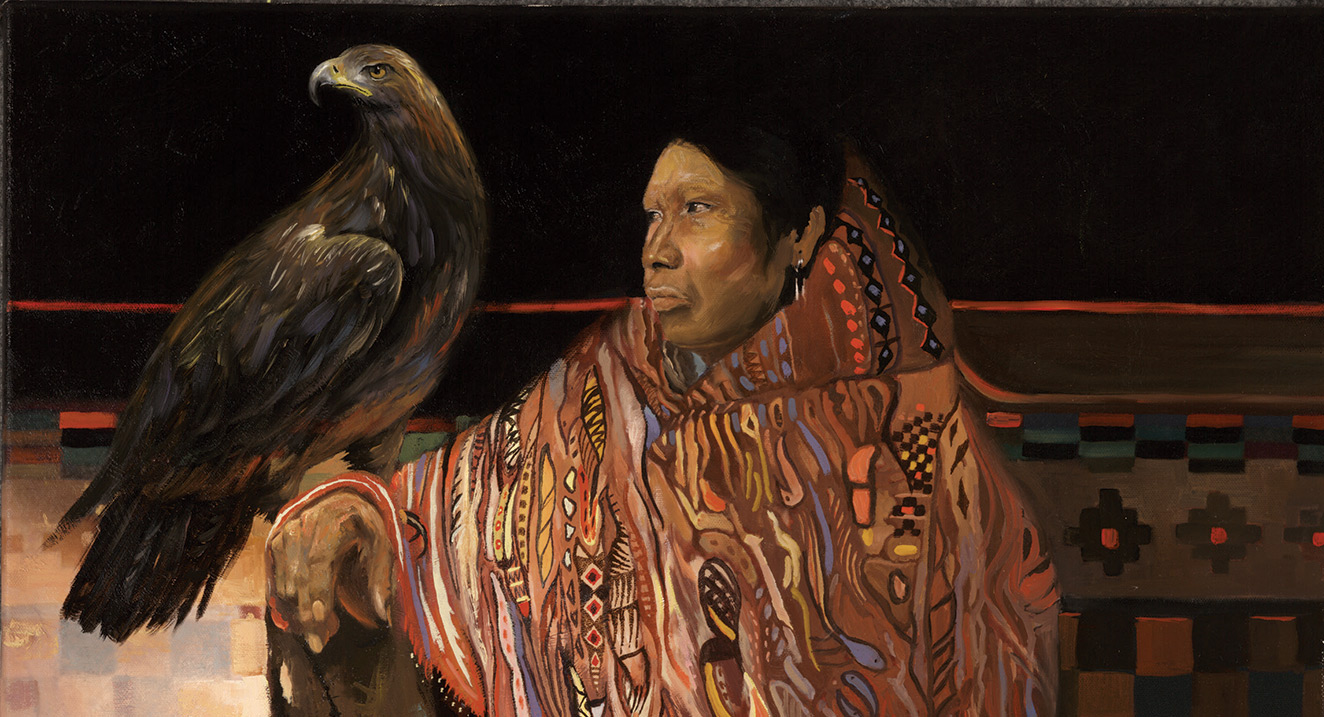 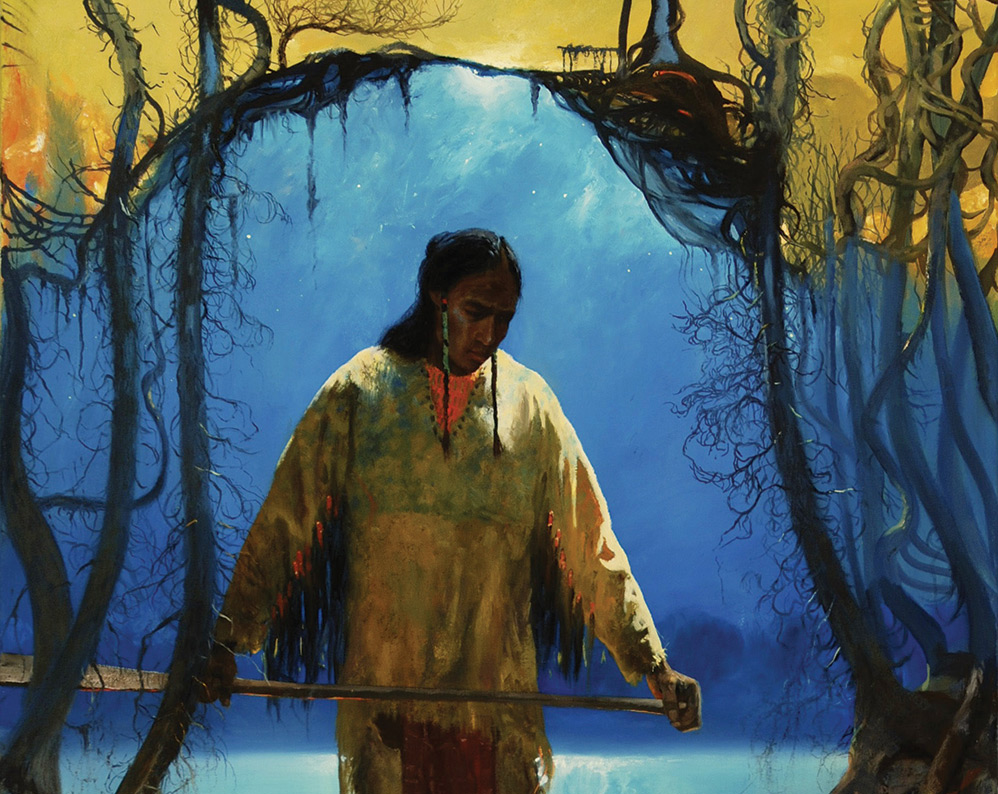