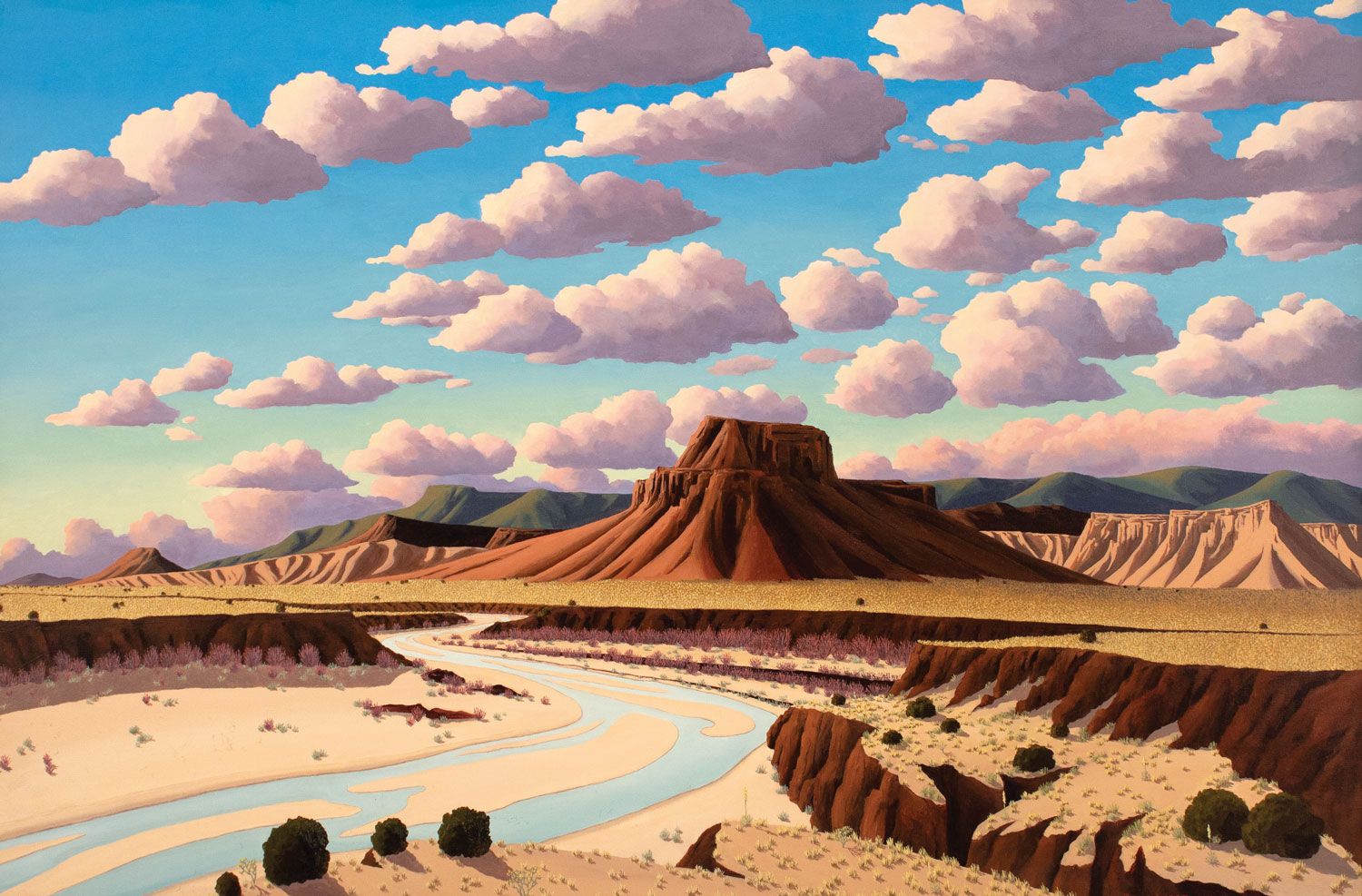 "The Warrior’s Way" | Oil on Canvas | 40 x 60 inches | This painting is of the Rio Puerco wash, just west of Cabezon Peak, in Northwest New Mexico, very close to Chaco Canyon. The playful use of cumulous clouds complements the high desert landscape.

12 Sep Big Skies Above the Land of Enchantment

FOR MANY, NATURE AND ITS BEAUTY ARE SACRED. The majesty of towering cumulus clouds exploding against a clear blue sky, golden rays of light streaming through a threatening storm, massive granite boulders connoting eons of early environmental changes — these all figure prominently in Doug West’s large, dramatic oil paintings. From early California campouts with his father to time spent amidst the coastal beauty of Hawaii, from years spent in New Mexico to his present home in Todos Santos, Mexico, the artist’s appreciation and passion for portraying nature has continued to grow. 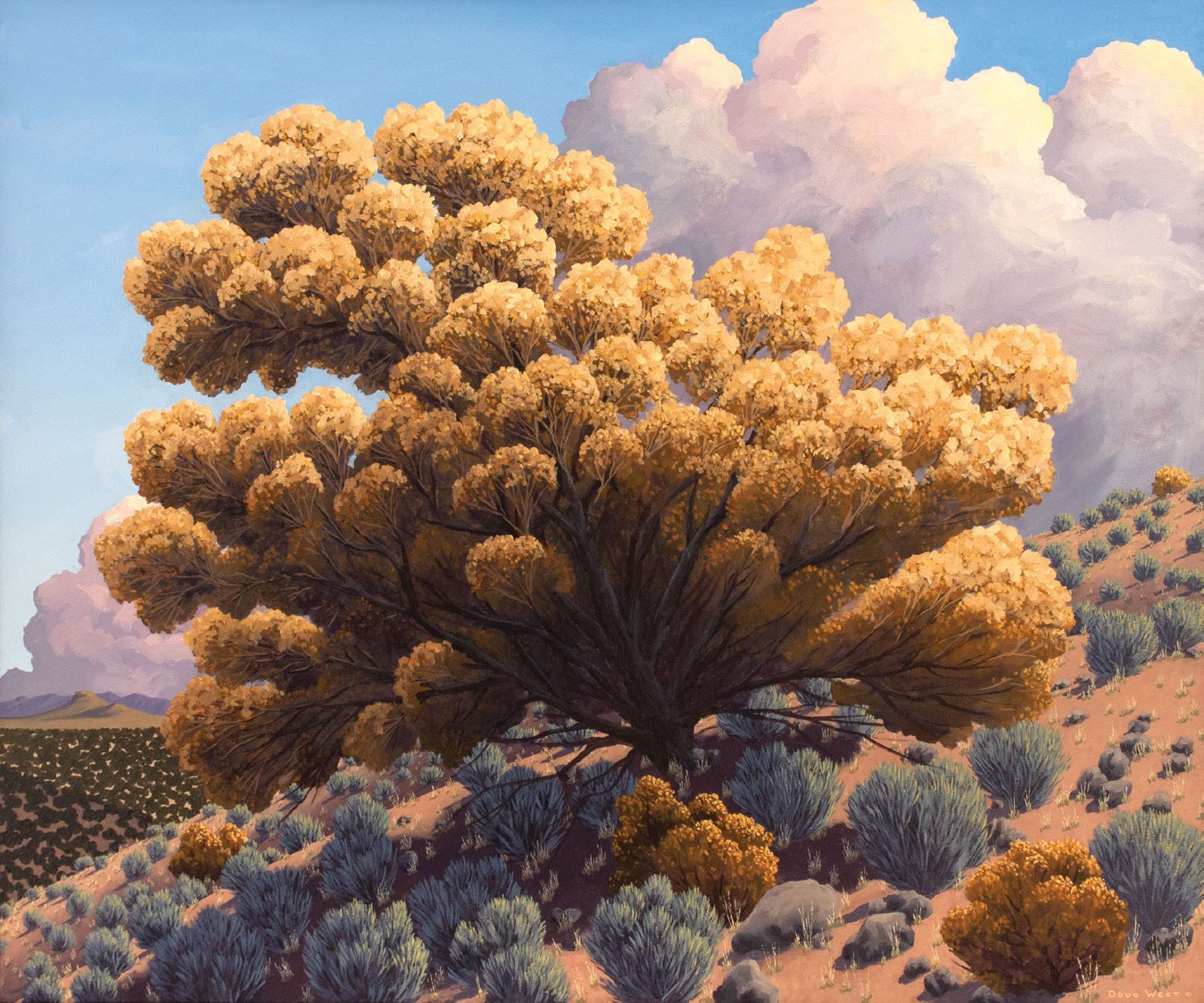 “Nature is a visual allegory of the divine for me and is woven into an unspoken message I try to convey, one that depicts a magical moment in time,” says West, expressing his absorption with nature’s wild glory.

When naturalist and environmental philosopher John Muir asked, “Who reports the works and ways of the clouds, those wondrous creations coming into being every day like freshly upheaved mountains,” he could have been speaking about West’s landscapes.

In his October show at Blue Rain Gallery in Santa Fe, New Mexico, clouds are West’s central theme. “Clouds profoundly alter how one sees a given landscape,” he says. “They accent and add to its visual atmosphere.” For an artist with heightened environmental sensitivity who’s concerned with elements of visual composition, West says the form and placement of clouds “amplify the overall drama and impact of my paintings. They are one tool, along with large landforms, for leading the viewer’s eye back into an illusion of space.” 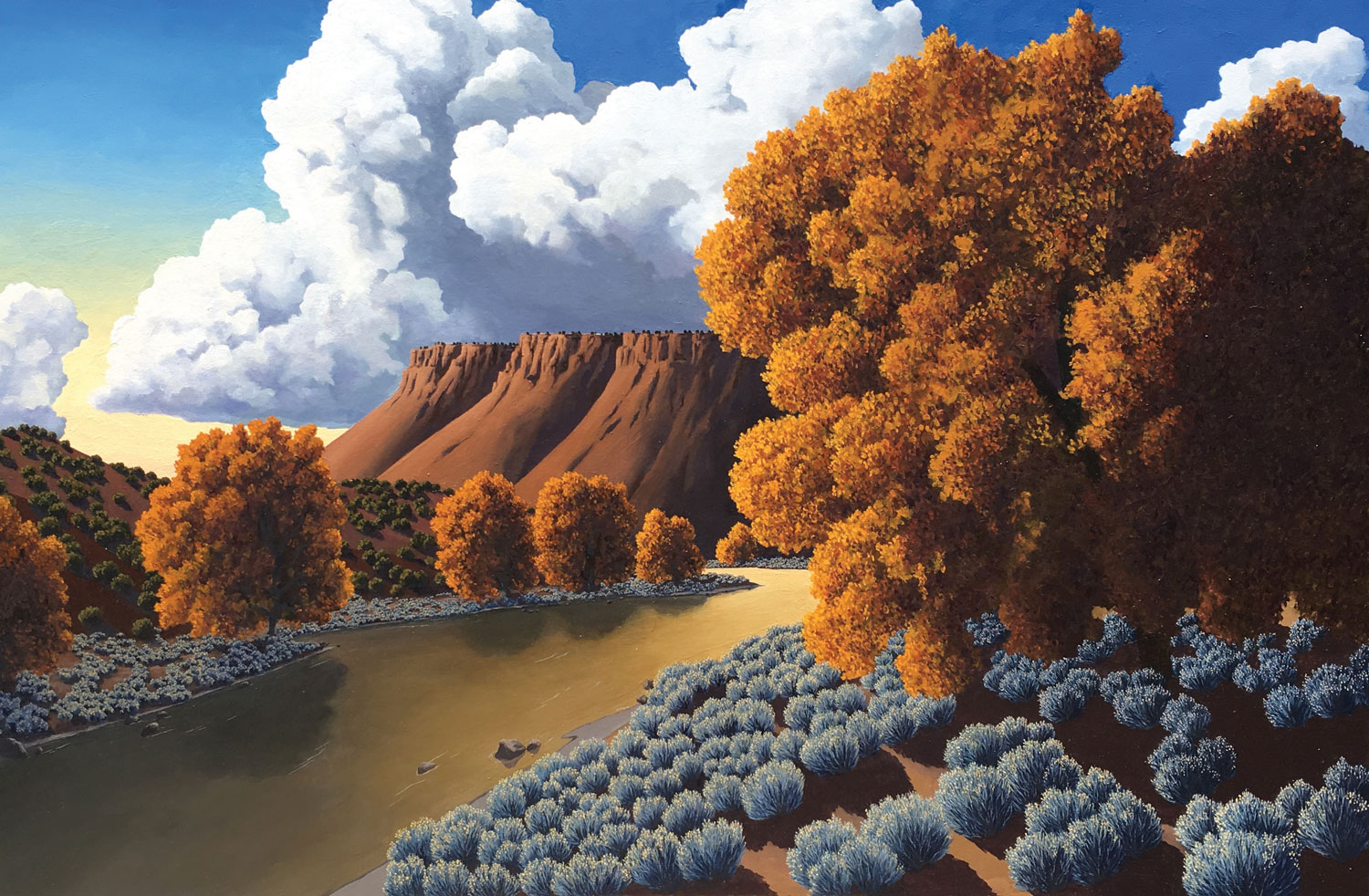 River of Gold | Oil on Canvas | 48 x 72 inches | Inspired by a visit to New Mexico’s San Ildefonso Pueblo, and located just east of Los Alamos on the banks of the Rio Grande near Otowi Bridge, this image focuses on the fall turning of the cottonwood leaves under looming thunderhead clouds.

Expounding on the inspiration he’s found in the American Southwest, West says, “Time spent out on the land is where I feel most grounded. Watching the sky’s changing light, with heroic cloud forms overhead — these feed my artist’s eye. I love that the land here is exposed and wide, open to distant horizons. New Mexico resonates deeply with my spirit as an artist. I am most interested in capturing that expanse and the connection that ties us to this place in a timeless, memorable way.”

West spent a brief period early in his career as a potter after graduating in 1970 with a Bachelor of Fine Art in ceramics from the University of Southern California. A year later, he earned a teacher’s credential at Brigham Young University-West, on the island of Oahu in Hawaii, and taught ceramics as part of an Army program until late 1974. 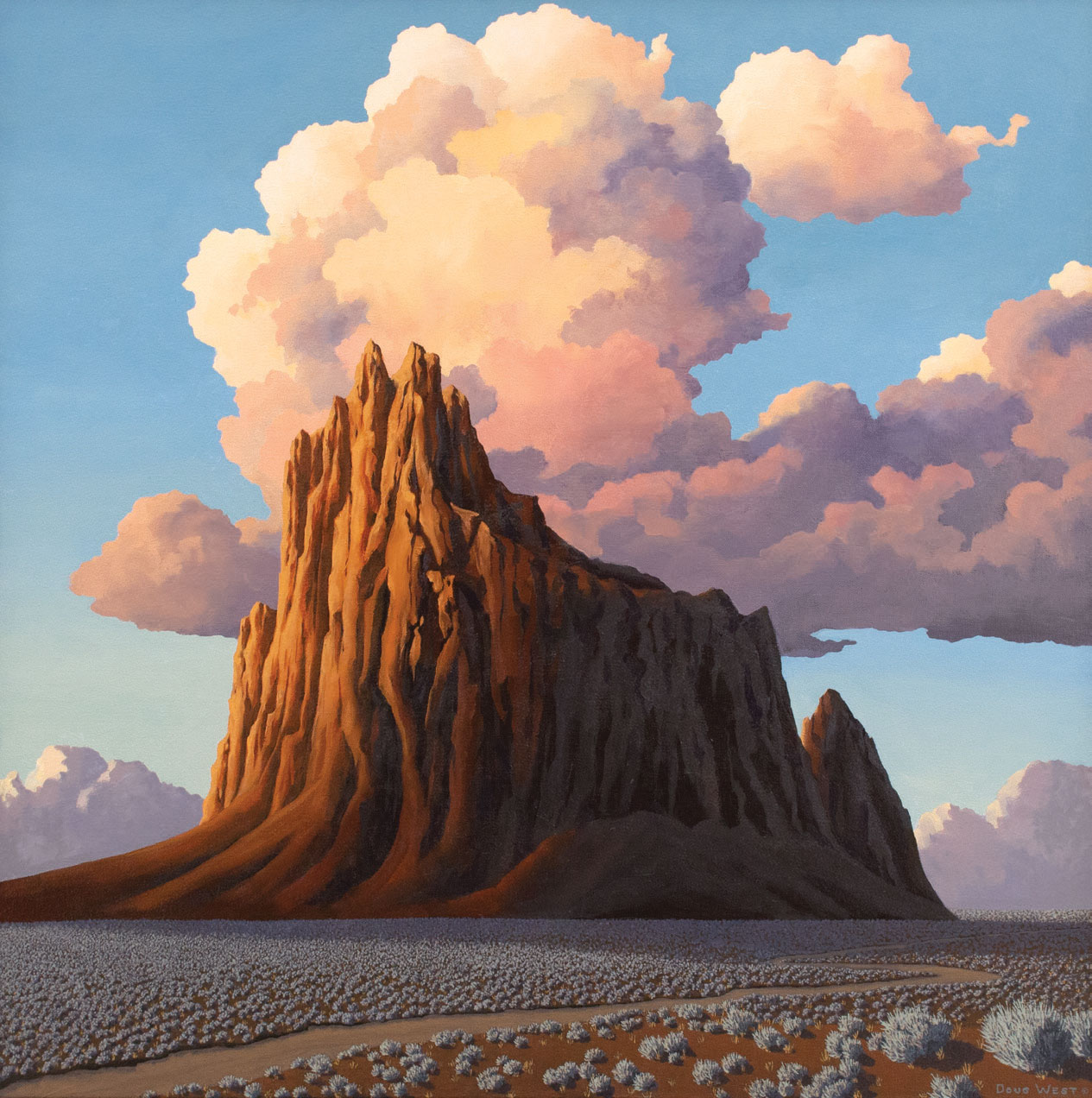 The One, The Only | Oil on Canvas | 40 x 40 inches | This is Shiprock, an iconic landform jutting from the desert landscape on the Navajo reservation.

Arriving in Santa Fe in 1975, he found a “vibrant art gallery scene” and began exploring serigraphy that reflected the surrounding landscape. West loves the challenge of learning something new, and changing mediums was something he approached wholeheartedly. Each of his serigraphs was entirely hand-pulled and printed by him, one ink color at a time. Some of his print editions have as many as 125 applications of color. West’s attention to detail quickly established him at the top of his craft.

Leslie Levy, owner of Leslie Levy Fine Art in Scottsdale, Arizona, has represented West’s serigraphs since the 1980s. “It is obvious to the viewer that Doug loves the landscape of the Southwest,” she says. “His richly hued prints encourage the viewer to contemplate the vastness and serenity of nature. His interpretations are unique, and his rich colors and signature style convey a sense of peace and serenity.” 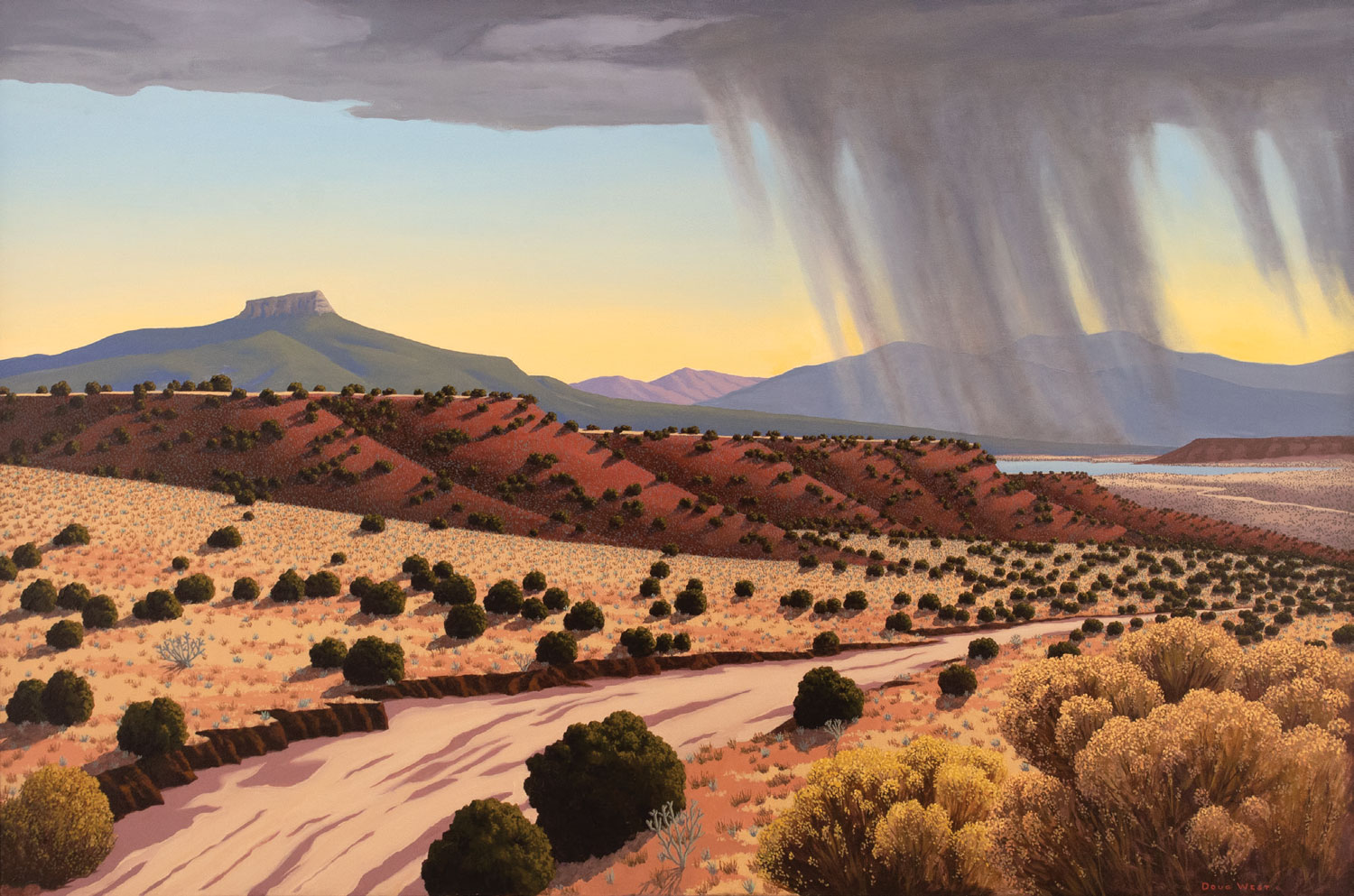 Pedernal Dreaming | Oil on Canvas | 40 x 60 inches | Pedernal Peak looms over the entire Abiquiu, New Mexico, area just north of the Jemez Mountains. This image captures the view looking south from Ghost Ranch during the summer monsoon, with the rain used as a compositional element.

Nothing learned is ever wasted. New information, new skills, and a deeper understanding of processes all inform new undertakings, sometimes in mysterious ways. Although West no longer creates prints, he feels that those years paved the way for him to transition into the unlimited possibilities of brushwork in his oil paintings.

These days, West is wholly devoted to painting. He prefers larger formats as they give him the necessary space to capture his subjects. As a landscape painter, he’s inspired by the French Impressionists, Maynard Dixon, and Ed Mell, all of whom speak to him about the impact of color and light, refined composition, and interpretive portrayals of form.

West sees his art as a “solitary pursuit of discovery.” He is largely self-taught, and his achievements are likely a result of his dedicated work ethic and constant striving toward mastery. This is how he lives his life in general, he says, explaining that he aims for “discipline and structure while allowing for creative freedom.” West is in his studio regularly for seven hours a day, six days a week, and likes to work on multiple canvasses in rotation, usually 10 to 15 pieces. Keeping numerous paintings going at once allows him to set aside any difficult passages and reconsider solutions. 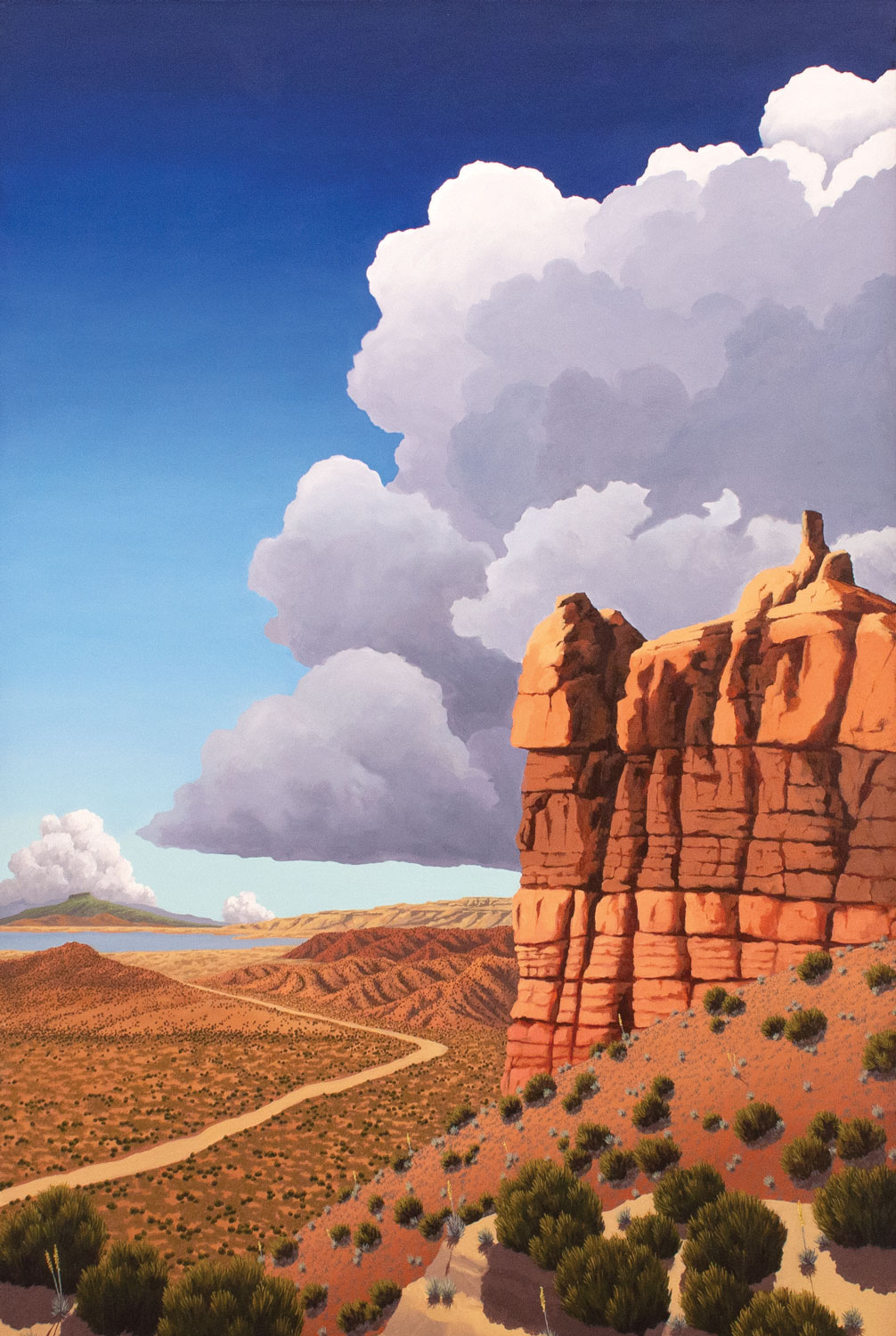 Many efficiency experts suggest starting each day with the hardest (or most dreaded) item on your to-do list. For West, this comes naturally. He begins with whatever new piece he feels is the most challenging, bringing it into focus. He initially uses large brushes and ends with tiny detailing verging on pointillism using a double 00 brush. River of Gold and Summer Splendor both exemplify how masterful this technique is when completed. The painterly strokes of roiling clouds and atmospheric sky provide the perfect backdrop for the highly detailed thrust of foliage dominating the foregrounds.

“My style may seem obsessive, but I love the detailed depth and subtle light my approach can create,” West says. “And the contrast between larger brushwork and tightly rendered work appeals to my sense of balance.”

Blue Rain Gallery has represented West’s oil paintings for the past 11 years. As owner Leroy Garcia explains, “Doug’s open, honest approach to gallery representation and his work ethic has allowed us to depend on him and present his innovative, rich, and detailed portrayals of our New Mexico landscape, year after year, in his solo shows. The shows are always well attended and frequently sell out. We consider him a master painter as well as a friend.” 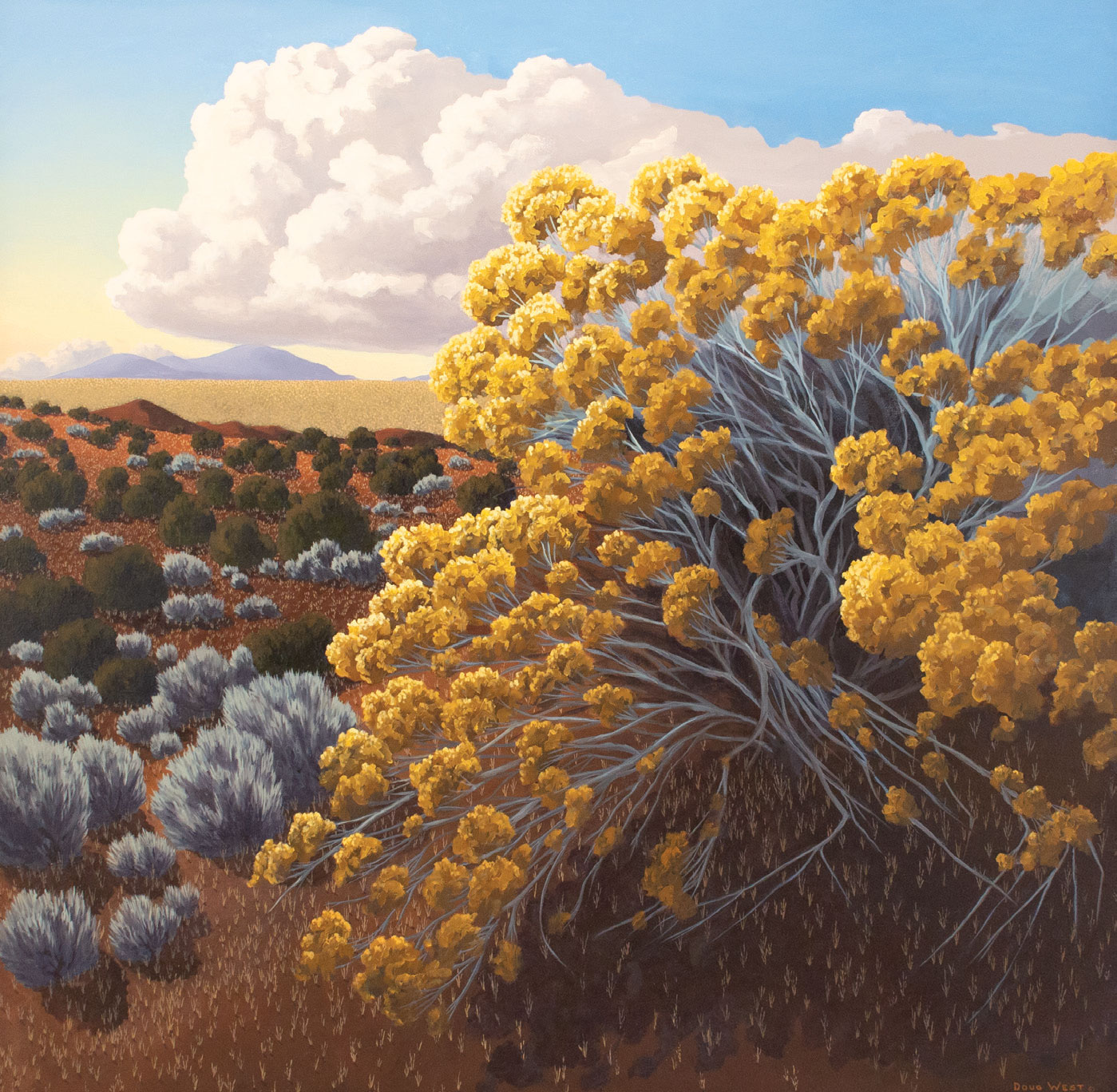 West has portrayed the Southwest landscape and skies for more than 40 years. As a printmaker, he produced more than 350 handmade limited editions, plus at least 30 images chosen for posters celebrating music festivals and other events. In 2012, his image Sanctuary was selected for a first-class U.S. Postal Service “Forever” stamp that commemorated the centennial of New Mexico’s statehood. His prints and paintings have been exhibited nationally and internationally with well over 60 solo shows at galleries and museums, and they take pride of place in numerous private collections.