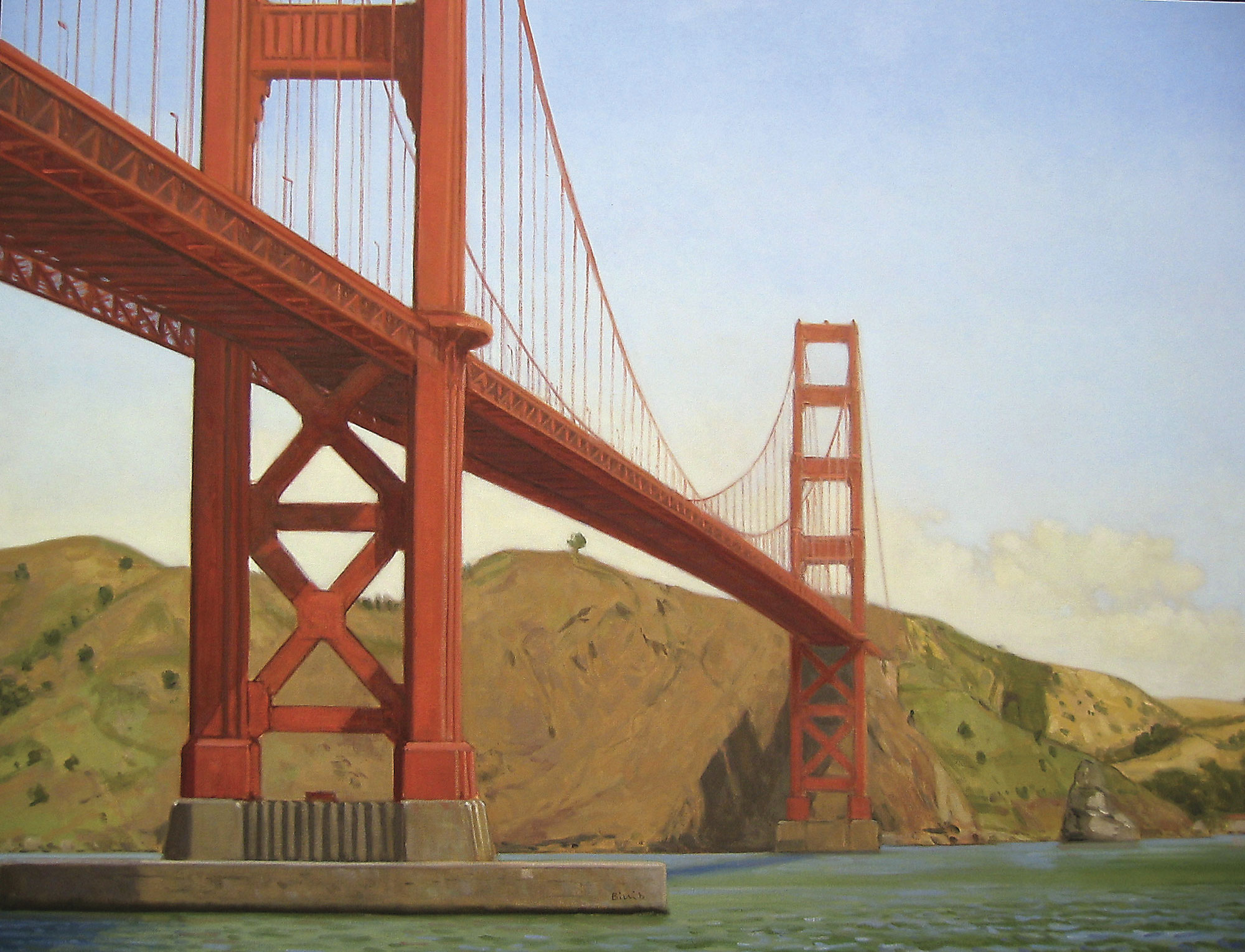 HANS-JOACHIM BILLIB IS HIGHLY ACCLAIMED IN EUROPE for his industrial paintings, as well as still lifes and landscapes. But the German artist had a lifelong dream: to paint San Francisco’s famous red bridge. Thanks to the inspiration of Marie-Nicolette Schottelius, he got his chance last year, when the German expat and art aficionado invited him to come to the Bay Area to paint.

“I knew that I wanted to paint the Golden Gate Bridge from the exact same angle that Hitchcock filmed the movie Vertigo,” the artist recalls. The movie made an impression on Billib at a young age, and he was particularly struck by the bridge’s complex metal understructure. “I found the exact angle, except there was a fence in front of me that I had to work around.”

The resulting painting views the dramatic structure from below, its top cut off; it’s an arresting take on the famous landmark, one that makes the most of the intricate crosshatching supporting its long span. During his three-week residence, Billib also painted Mount Tamalpais, Angel Island and San Francisco city scenes — always on site, from start to finish, in true plein air style. “The scenery — the Marin Headlands, the San Francisco skyline, the water and the surrounding hills … ” he says. “It surpassed my imagination.”

Plein air painting is the truest way to capture the unique topography of the San Francisco Bay Area, says Marie-Nicolette Schottelius, because of its immediacy and authenticity. “You can always tell when a painting has been painted plein air. If it hasn’t, it never truly captures the scenery, and the light outside.”

Schottelius arrived on the West Coast from Europe in 2003 with a fully developed appreciation for and deep knowledge of fine art. “I was born and raised in Germany; I studied in Italy and France and traveled all over Europe,” she explains. “My parents are collectors. As kids we were dragged through every museum, castle and chateau in Europe. You develop a good eye for what you like.”

After receiving her Ph.D. in history and art history, Schottelius worked as a journalist, then married, started a family and moved to northern California. There, everything — the light, the scenery, the language, food, people and homes — was different. She immediately loved the inspirational landscape, she says. “I was truly captivated by the scenery — the water, the Golden Gate Bridge. There is nowhere else like it in the world.” But as she began to immerse herself in the culture, touring real estate open houses, going into peoples’ homes for events, she was struck by one thing. “There were amazing houses and no art. For a European, that was surprising.”

In 2004 Schottelius made a few phones calls to plein air artists she admired, offering no more than a plane ticket, a bed and meals. “I thought the artists whom we knew in Berlin would be so thrilled to paint here. I said, ‘All I can guarantee you is a great plein air experience.’ ”

That year she brought two German artists to the Bay Area, hosted them for several weeks, then mounted a show at the end of their stay with the support of San Francisco’s German consul. The canvases were still wet, but the paintings sold, and by the time the artists departed they were already planning their return.

For Berlin native Sabine Kasan, who has made five painting trips to the West Coast, California continues to beckon with its endless subject matter, from quiet bay scenes to the vertiginous streets in San Francisco’s Presidio Heights. “In California it is so much easier to find the perfect scenery every plein air artist is looking for.” And there’s another benefit, she says: “Every time I come back from painting in California, I am so much more motivated and inspired to paint more plein air in Europe.”

For the European painters whom Schottelius has sponsored in California, working on the West Coast took some adjustment. “These artists are all classically trained in European universities of art,” explains Schottelius. “They learned how to paint a hand, how to paint a flower and really studied technical skills before tackling landscapes.” But each locale brings its own challenges, she points out. “They all struggled with the light in the beginning. They had to work at it to live up to the reality.”

The first time Kasan came to the Bay Area, she asked Schottelius to buy paint for her so she wouldn’t have to carry the tubes in her luggage. “She ordered five tones of gray,” Schottelius laughs. “Then she got here and didn’t use any of them.”

“The light in California is so much stronger, the colors are brighter and they contain less gray,” says Kasan. “I had to use a very different color palette than I use in Europe. I have been using far more ‘pure colors’ like red, yellow and blue. But the h ardest part of painting in California for me was painting the water. It was quite challenging to capture the almost turquoise shades of the waves at certain times of day. The colors of the Baltic Sea, for instance, have more gray tones.”

Schottelius only works with true plein air painters, that is, painters who paint outside. They respond with immediacy to the light, the wind, the shifting cloud patterns, the movement of wildlife, and, in coastal California, the fog.

During her first trip to California, artist Doris von Klopotek — who has been exhibited in Japan, Sweden, St. Petersburg, Israel, Greece, Denmark and Poland, but never in the United States — painted iconic scenes from the rocky coast to the palm trees and skyscrapers in downtown San Francisco. She recalls, “Coming to California for the first time in September of 2007, it all felt so new and fresh to me, yet also surprisingly familiar. One of my defining moments in California was fighting the strong winds at Rodeo Beach. With my left arm trying to keep the canvas from flying away I put all my weight against the canvas while trying to draw a reasonably straight line with my right arm. Back in Germany even after several weeks, I could still remember the feel of the California air and light.”

Schottelius insists that this in-the-moment immediacy subliminally translates to the canvas. “If you look at the light, and the reflection in the water, you realize that you can’t capture that when you take a picture, which is what a lot of artists do. In the end, they go home and paint under artificial light in their studio, and in the end you can tell. And that’s the beauty of true plein air painting. 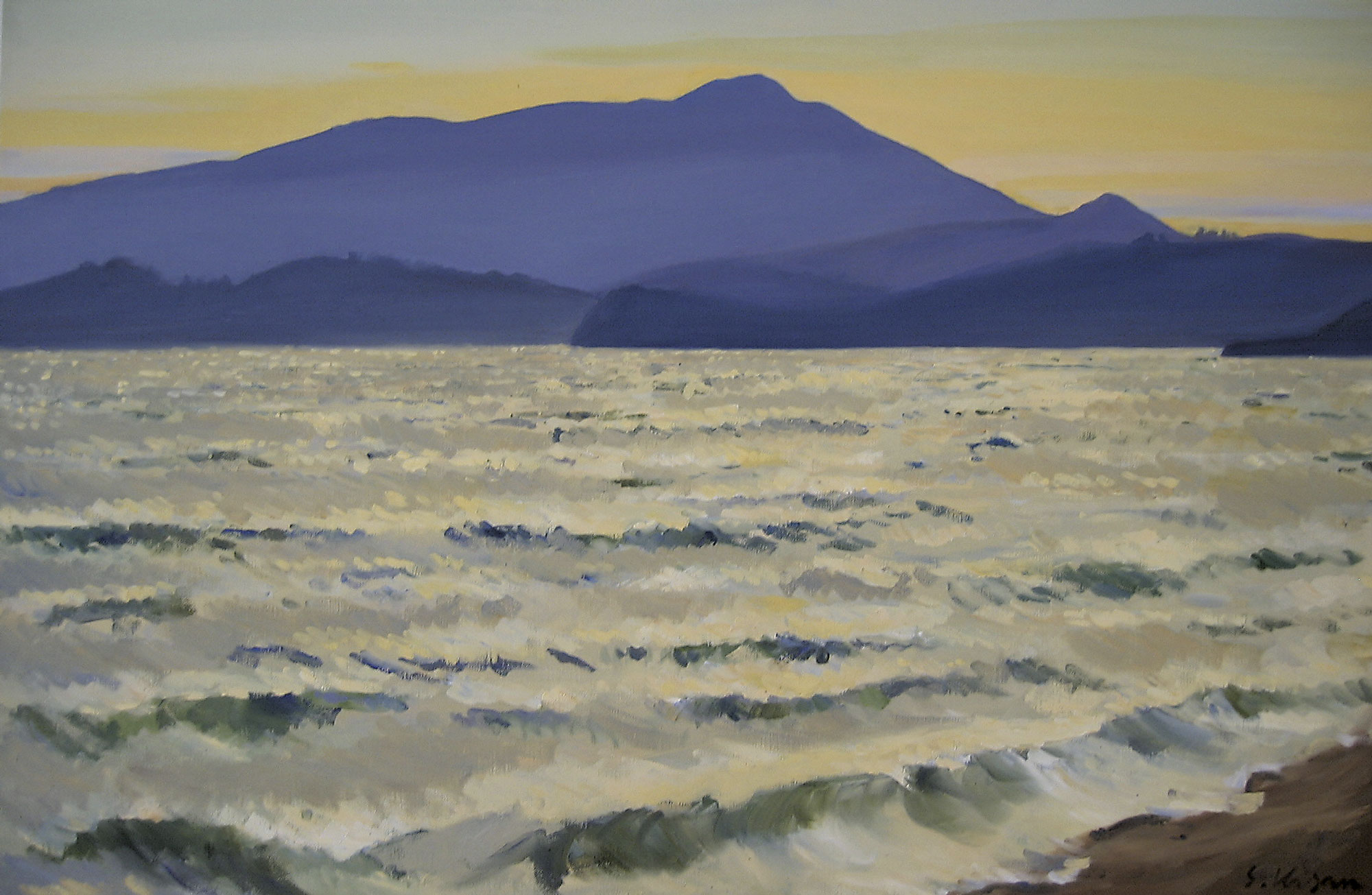 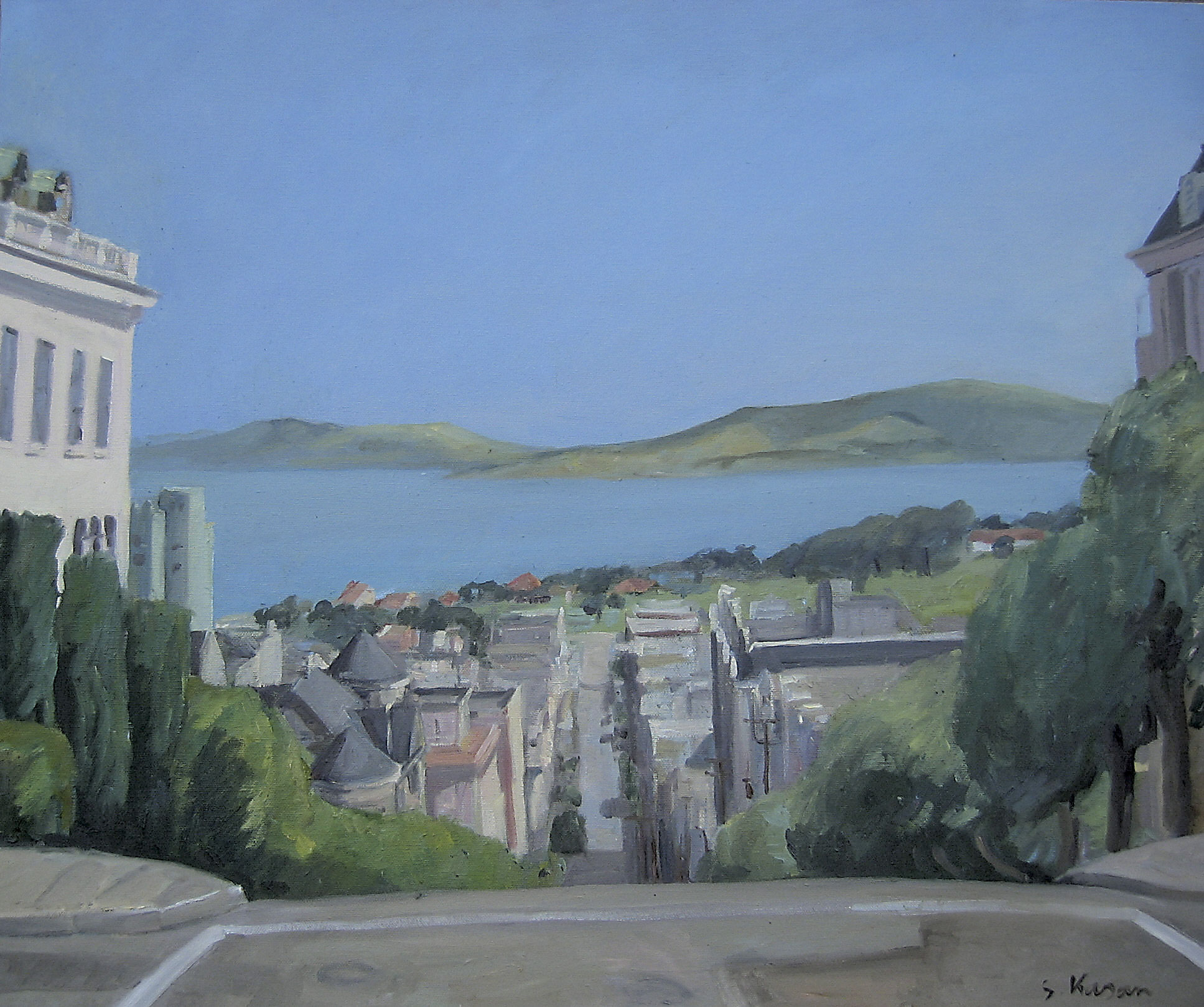 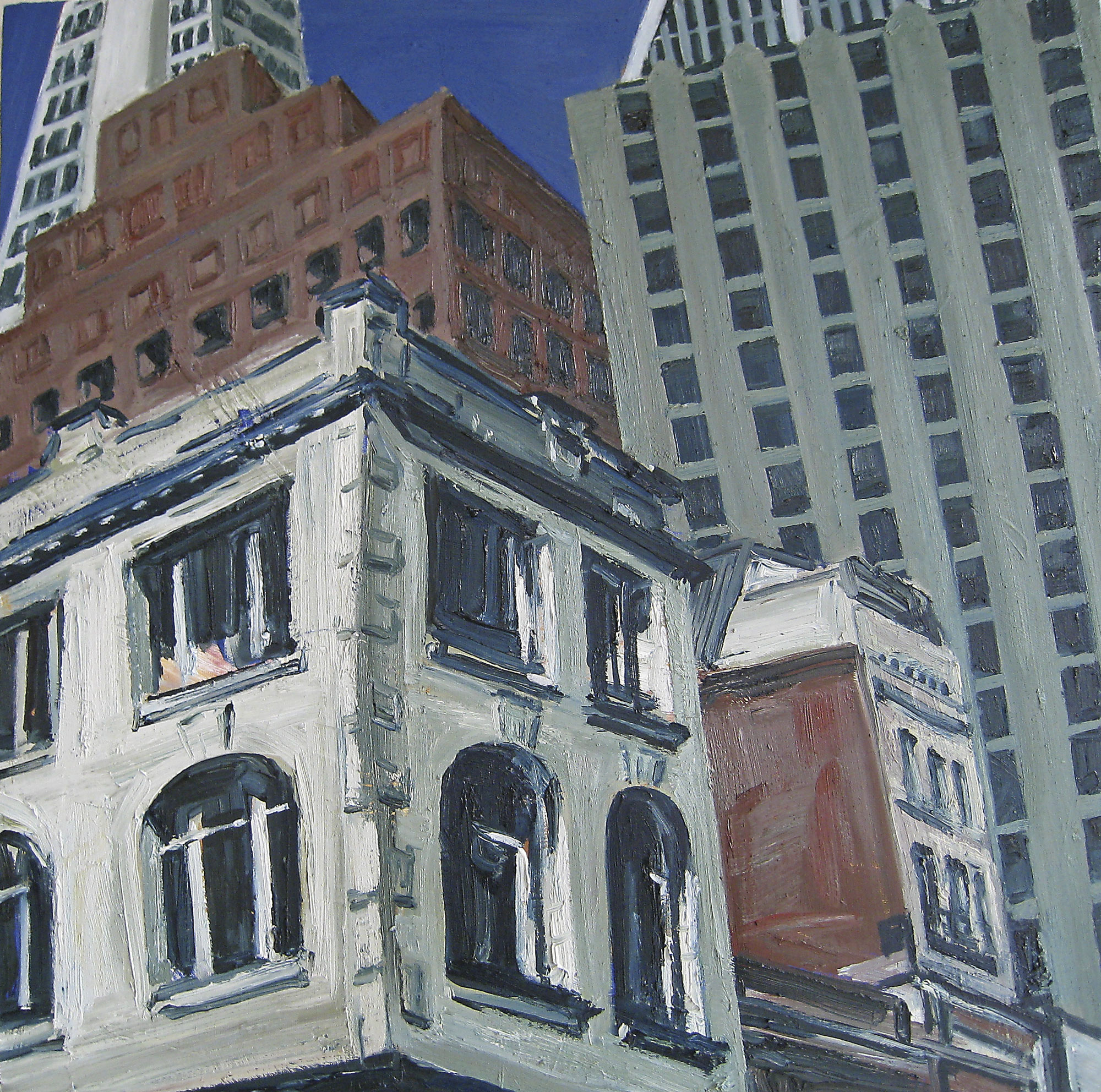 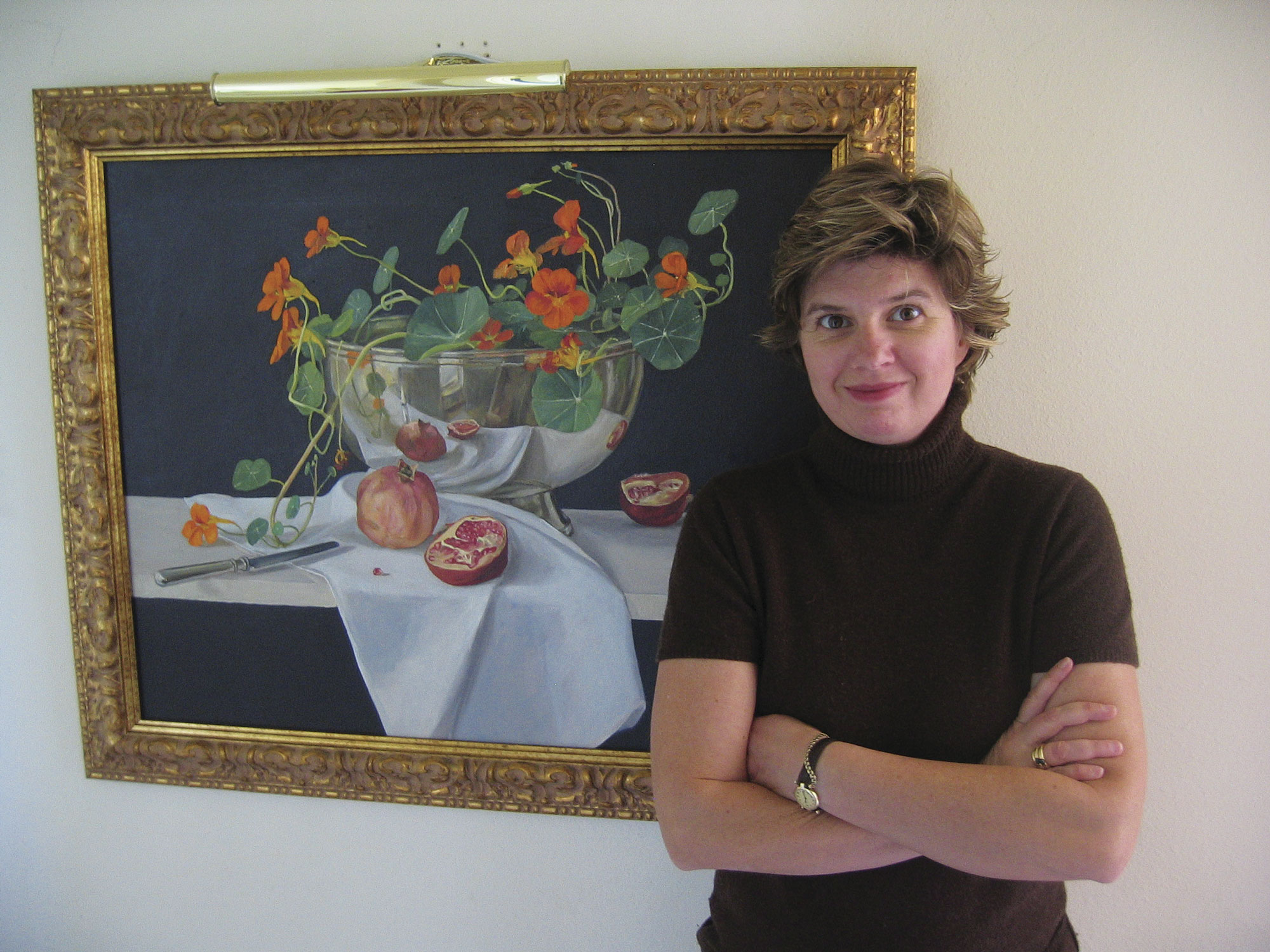 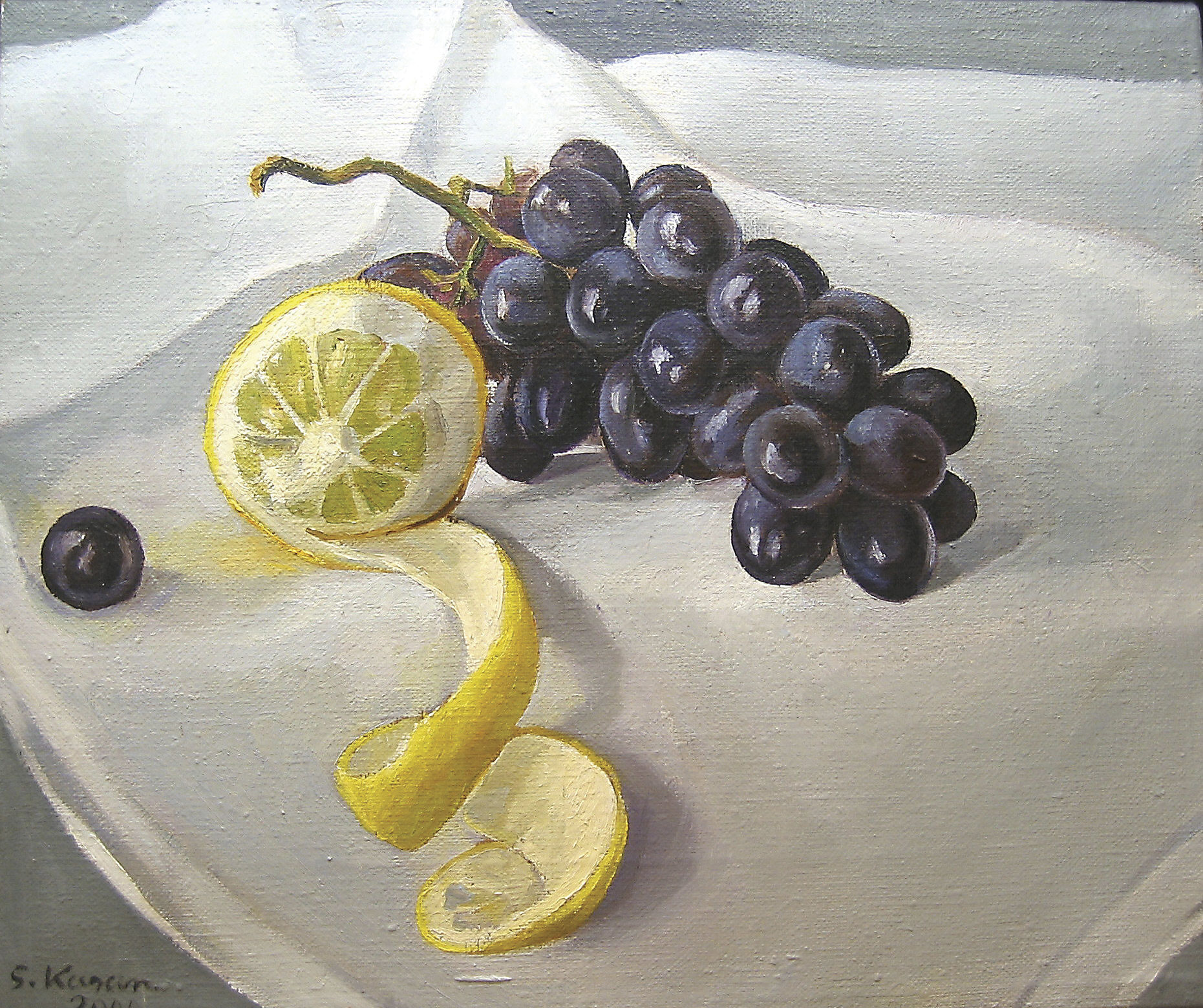