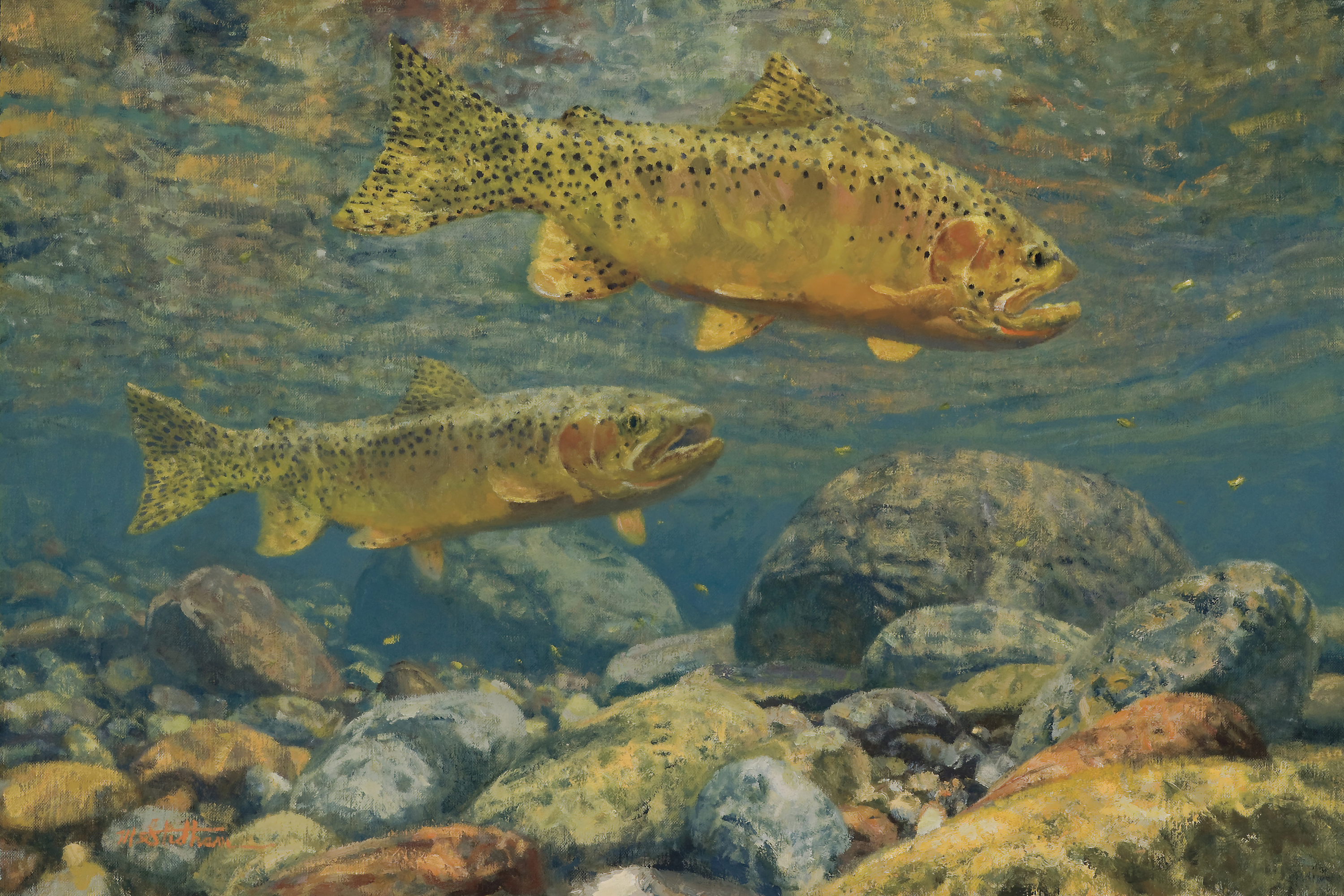 24 Jul Casting for the Light

But no matter how many times we wet a line, invariably during the return home we realize that the miracle of our experience actually had very little to do with the quarry. It is the ever-changing medium fish inhabit that leaves us longing and mesmerized.

Painter Michael Stidham revels in the bigger picture because he understands the muse.

Stidham has been called one of America’s greatest trout impressionists and a stylistic heir to the late saltwater master Stanley Meltzoff. In distinguishing the difference between painting to document and doing so to create fine art, Meltzoff once wrote: “The fish painter may choose to depict exactly what he sees during the moments he is trying to disentangle the real fish from the wish fish wavering in the water between nothing and something.”

The sparkling allure of Stidham’s oil paintings, which can be found today in private collections across the country, is based upon his ability to transcend his subject.

At his studio in the Wasatch mountain foothills of Utah, Stidham is standing next to a large portrayal of two Westslope cutthroat trout. Like a caddis hatch, the scene is a blizzard of abstraction masquerading as a submarine hatch.

Stidham imagines that he is underwater. With brush in hand, he is, metaphorically, supine, back flat against the cobble of a clear Montana stream; the cold awakening current passing overhead.

Every stroke of horsehair represents a swoosh of refracted light ricocheting off rocks and scales. He says he has witnessed the same kind of prismatic luminescence before: in sunbeams falling through the tinted glass of Gothic church cathedrals and airy Greco-Roman rotundas.

“How many fish painters draw upon that kind of reference to connote a feeling they have inside of them?” asks Fred Polhemus, who handles sporting art for the J. Russell Jinishian Gallery in Fairfield, Connecticut.

Like Stidham, Polhemus is a rabid angler. “Mike’s a great painter who is at home on the canvas as he is at reading the water of Western rivers,” Polhemus says. “That’s saying something because he’s one of the most astute fly fishers I’ve ever known.”

Stidham has a modest explanation: “There’s a magnificence in the settings where fish dwell but we’re on the other side of the surface plane. I don’t think of myself as painting fish,” he says. “I’m always obsessing about finding a better way to see the light, to achieve color harmony and maybe bring viewers to another realm that’s right in front of them.”

Jim Brown, owner of Old Main Gallery in the fishing hub of Bozeman, recalls how an influential art connoisseur from Washington, D.C., made a special trip to Montana to inspect some high-priced landscape paintings by several prominent artists. He left town with a Stidham tucked under his arm.

“He didn’t know and wasn’t interested in the species of the fish. He wasn’t an angler,” Brown says. “He bought the work because of Mike’s interpretation of light and color — the artistic qualities of the painting. To him it wasn’t a fish painting, but a great contemporary piece.”

In the Florida Keys at Redbone Gallery, Gary Ellis reflects on a generation of fish painters who ascended with Meltzoff’s rising tide, proving that fish painting could be more than a piscatorial equivalent of tightly rendered Duck Stamp painting. He invokes Mark Susinno, Don Ray, Al Barnes and Stidham. “It’s hard to put your finger on the magic that some artists possess,” Ellis says. “Mike is a wizard. His fishscapes grab you. You want to climb inside of them.”

Born in 1954, Stidham was raised in southern California and stalked trout in an arc of streams extending from the Sierra to the desert Southwest. Early on, he was a wildlife artist who ended up rejecting tight representation. People have long said that Stidham doesn’t view the world the same as anyone else.

“I remember Clyde Aspevig remarking that trees remind him of lungs on the landscape,” Stidham says. “A trout stream is the best mirror of natural beauty. To me, there’s nothing more intriguing than the drenching effect of sunlight in water bouncing off of rocks and fish, absorbing color and reflecting it. Sometimes, you can’t begin to understand the simplicity of things until you ponder the architecture of their profundity.”

Stidham’s uncommon talent is rivaled only by his elusiveness. During the past 20 years, he’s taken several lengthy sabbaticals from painting, which has served to only heighten demand for his originals and limited edition etchings of flies and fish.

When he surfaced again recently in 2009 following a half-decade break, it was with an old Airstream trailer in tow. The rig had been damaged by a fire. Seeing its potential, Stidham purchased the silver orb, gutted its interior, and converted it into a portable studio that he now parks next to many of his favorite stretches of blue-ribbon water.

From Colorado’s Frying Pan to the triumvirate of the Madison, Gallatin and Yellowstone in Montana — and with side excursions to the South and Henry’s forks of the Snake, the Bighorn and Big Hole rivers — the renaissance of Stidham is again in full force.

“My ambition is to paint my way across the West, to make up for lost time,” he says. As the economy spiraled into the recent recession, Stidham responded by downsizing the size of his canvasses and working with his galleries to sell 18- by 24-inch works for less than $4,000.

K.C. Walsh, owner of Simms Fishing Products, has traveled the world with fishing legends. Stidham, he says, is held with almost legendary reverence. “He really gets the spirit and feeling of a river that cannot be explained in words,” Walsh says.

Knowing the demand for Stidham’s work, Walsh commissioned the artist to collaborate on a limited run T-shirt collection to complement Simms premium quality waders and other angling accessories. Of any artist the company has enlisted, Stidham’s stylized fish command the most resonance, he says.

For Michael Paderewski, owner of the Sportsman’s Galleries in Beaver Creek, Colorado, and the Buckhead section of Atlanta, Stidham’s return to the easel is being met with enthusiasm. “I’m looking at one of his paintings right now,” Paderewski said, referring to a 30- by 50-inch piece titled Rainbow on the Rocks. “When he nails a scene, it lights up the room. The world of a fish is an amazing place to be.” 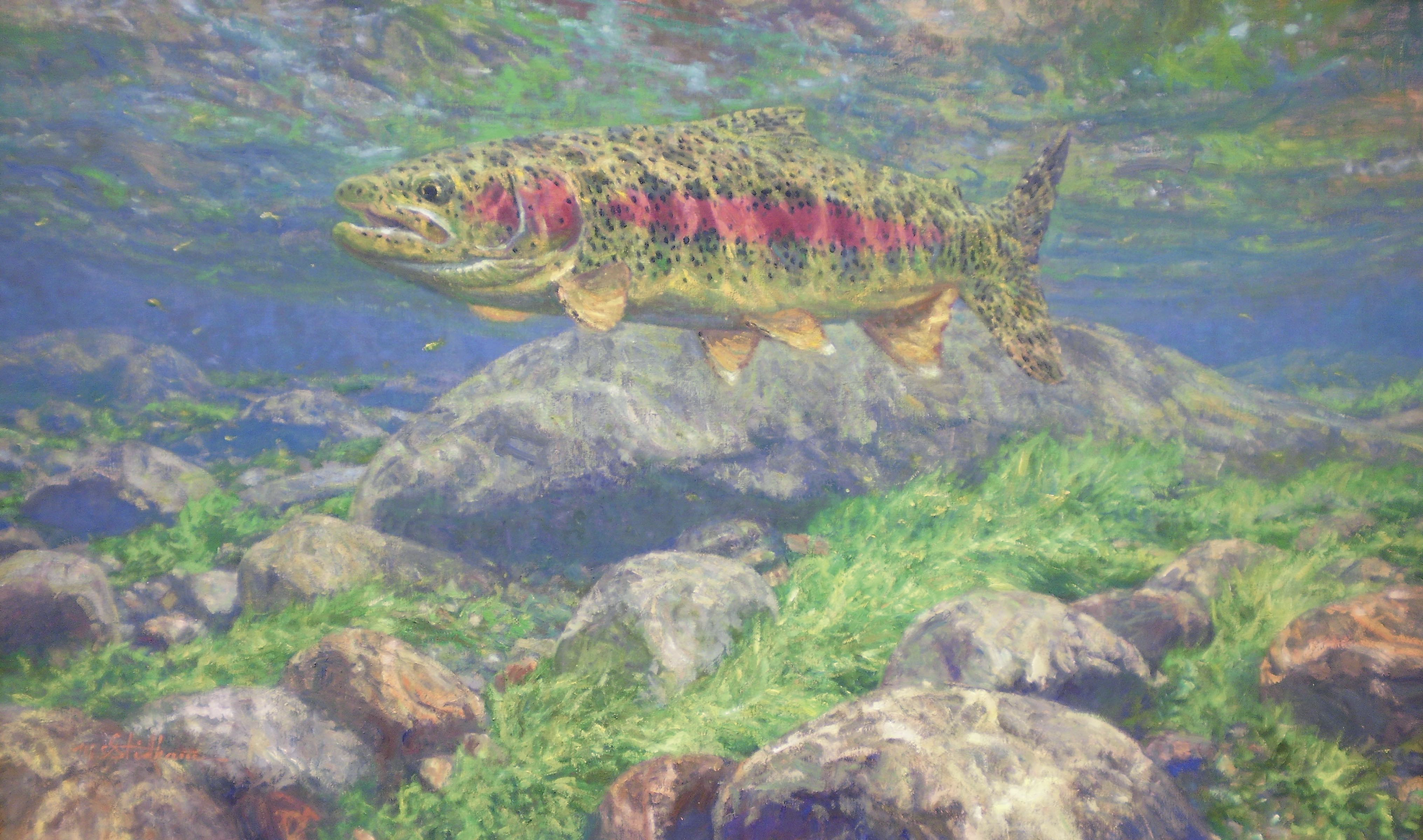 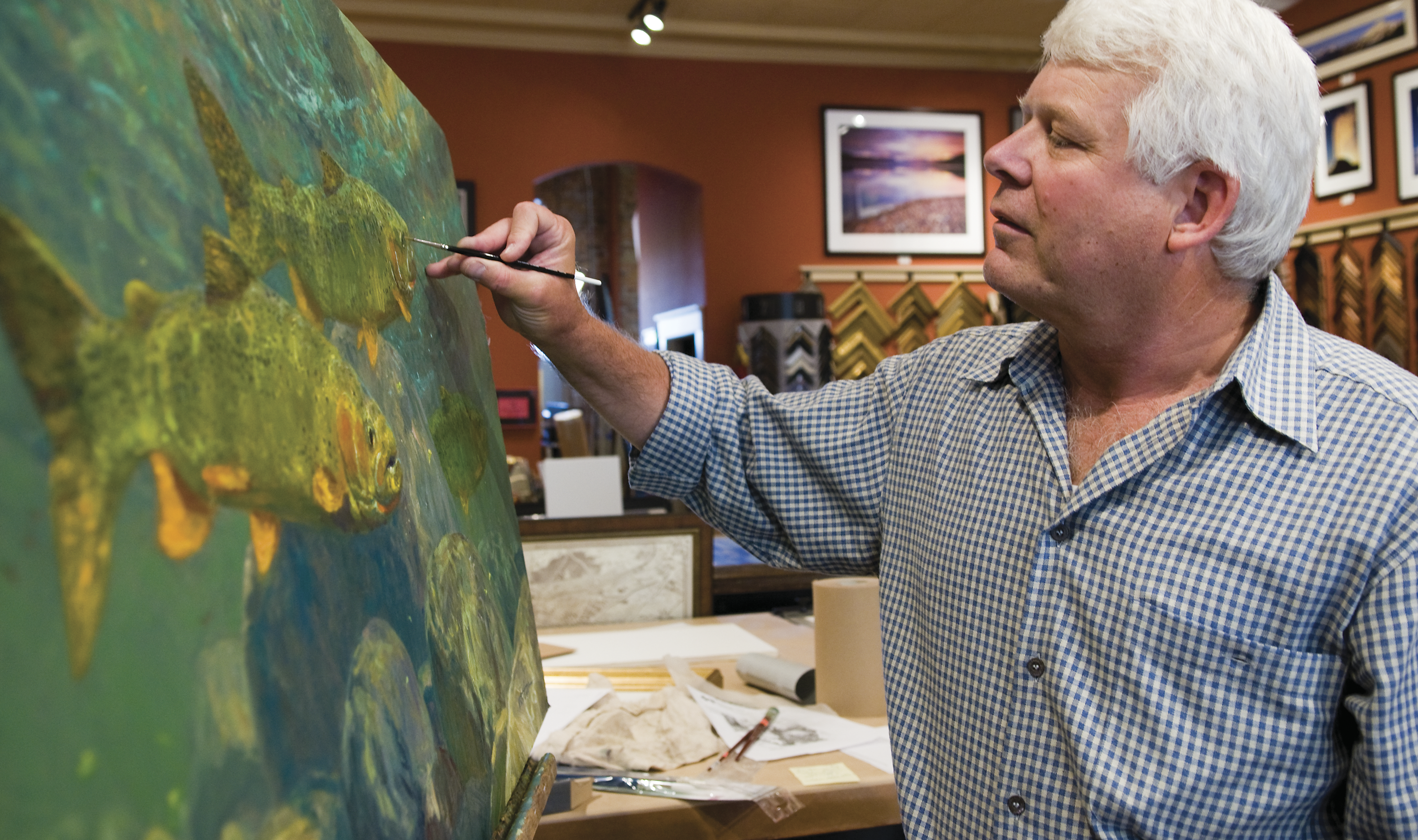