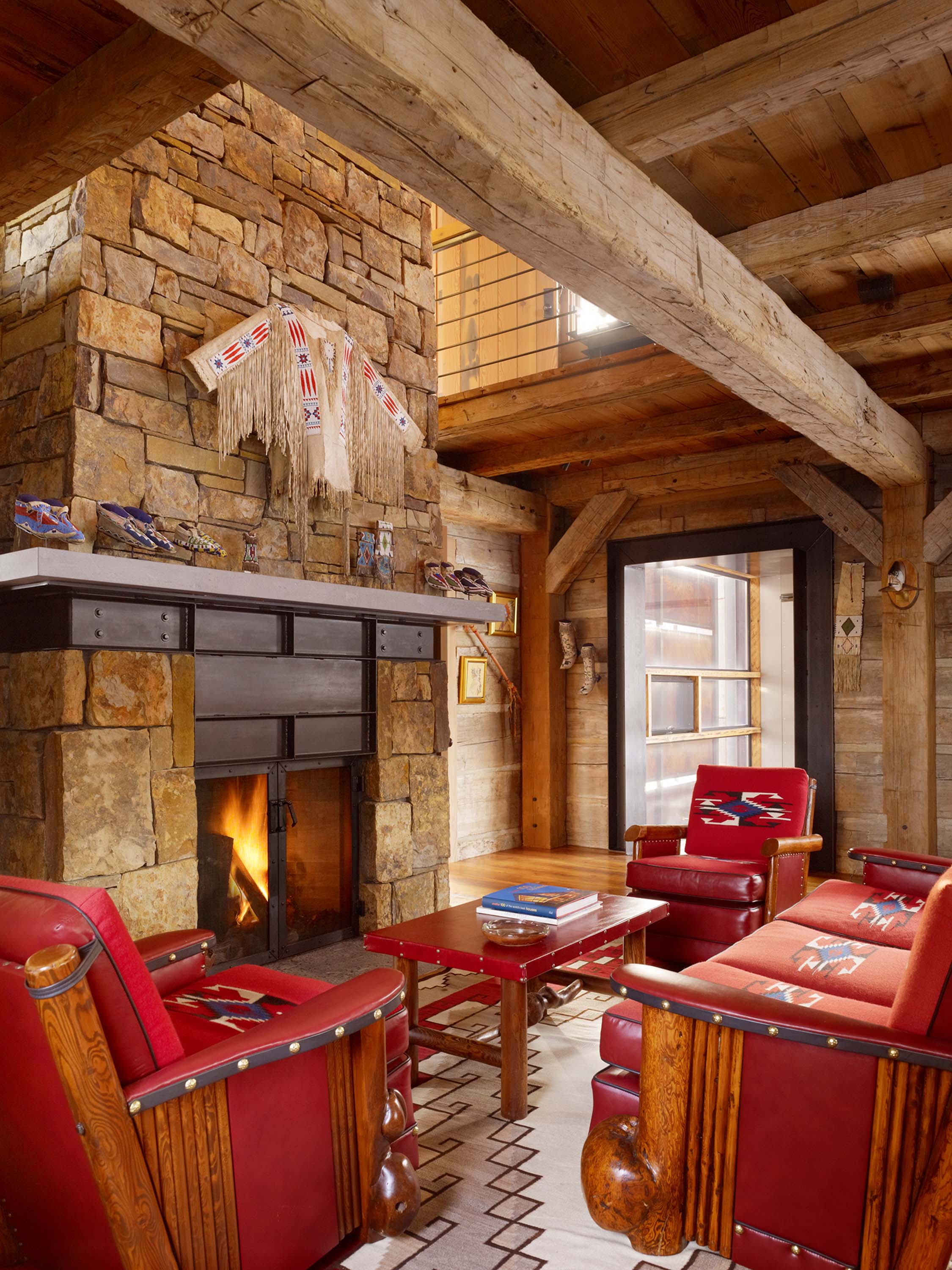 Crunching along a gravel driveway that winds through snow-flecked pine trees south of the Jackson Hole airport, I eventually come around a corner and a relaxed, happily situated rock, log and barn-wood home greets me. Its oxidized corrugated-steel roof glints under the winter sun. Trees — mostly lodgepole pine — tower around the perimeter. In the background, craggy mountains loom beneath a cotton candy sky. And in the middle, the happy home sits warm and cozy against the chilly weather. The scene is about as imposing as Bambi, whose friends and relatives wander the property’s forests, especially this time of year. Walking in the front door, I rather expect the place to hug me. Instead it awes. But in a relaxed, welcoming way.

Most Western log homes of a certain scale have a piece or two of Thomas Molesworth’s antique, Chimayo-or leather-upholstered, knobbled pine furniture in them. Or at least have pieces made by a modern day Molesworth imitator. This home has upwards of 100 pieces — all Molesworth originals — dining tables, club chairs, sofas, coffee tables, dining chairs and sideboards. And that’s just in the great room.

Ray and Amy Thurston have one of the largest collections of Molesworth furniture in the country. Shortly after buying a home in the valley — a small cabin they had to snowmobile in to — Ray Thurston wandered into Jackson’s Fighting Bear Antiques and fell in love with Molesworth’s distinctive style. “I’d never seen him before and one day Ray just walked in and walked out with a handful of pieces,” says Terry Winchell, who founded Fighting Bear in 1978 and, in the decades since has become a recognized Molesworth expert (he wrote 2005’s Molesworth: The Pioneer of Western Design. “I’d buy several pieces every couple of years,” Thurston says.

And then one day in 1996 Winchell called Thurston with an opportunity he thought Thurston couldn’t pass up: Thurston could buy department store magnate John Brandeis’ entire Molesworth collection. “There are only about four or five things this important and big that I’ve been involved in,” says Winchell. “It’s a really unique collection.”

But Thurston said no. At least initially. “But then I did the calculations and called Terry back 15 minutes later,” Thurston says. And the timing was perfect. Bontecou Construction was just putting the finishing touches on this home, which was designed by Eric Logan of Carney Logan Burke Architects. “We were going for a lodge feeling, so the furniture really went with it,” Thurston says.

The Thurston home is the first that Logan did for Carney Logan Burke, not that the award-winning and diverse firm was yet called Carney Logan Burke. Back then it was still Carney Architects. (Logan and Kevin Burke became partners in 2005.) Even though the name was different, the company’s focus was still on clients. “We’ve always listened to and responded to our clients,” Logan says. That’s why the firm has done buildings from the 45-story Four Seasons Hotel and Private Residences in Denver to the lower tram terminal enclosure for Jackson Hole Mountain Resort and the Laurance S. Rockefeller Preserve Interpretative Center makes the space even more fitting for these particular Molesworth pieces.

Winchell points out that, as far as Molesworth goes, the Brandeis pieces are on the more refined side. “These are Molesworth meets Modernism; they were obviously done for a penthouse rather than a ranch,” Winchell says. “Molesworth really shined when projects had no budget and Brandeis’ penthouse obviously had no budget. In 1942, when he was making this stuff, a king size bed was unheard of. But that’s what he made for Brandeis.”

Thurston’s favorite piece is a white leather-covered dining room table. “We have had so many great parties around it,” he says. The Thurstons might have one of the country’s most important Molesworth collections, but their home is anything but a museum. “We live here and have friends over as often as we can,” Ray Thurston says.

As often is the case, Thurston doesn’t just collect one thing: Woven among the Molesworth furniture are museum-quality Native American artifacts. “Ray always buys something important,” Winchell says. “He doesn’t just buy to buy, but because he has a space to fill. He knows what he wants and we seek it out together.” Highlights of his Native American collection include a Cheyenne War Shirt that took Winchell several years to find. “It was difficult because most (Cheyenne) were wiped out at the Sand Creek Massacre,” Winchell says.

“That shirt was one of the last things I wanted,” Thurston says. “Now I’m done. Besides, I really don’t have any more space.” 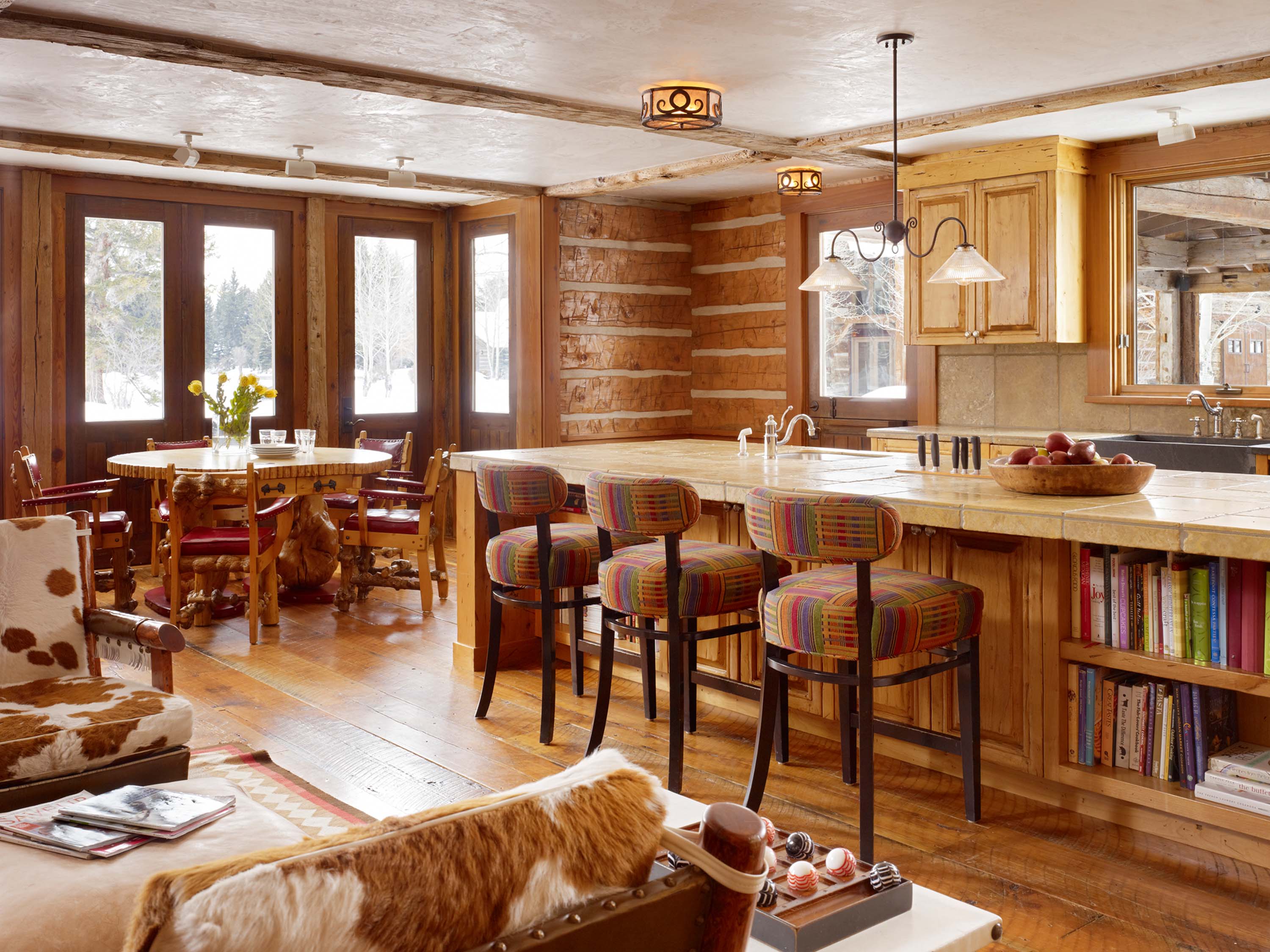 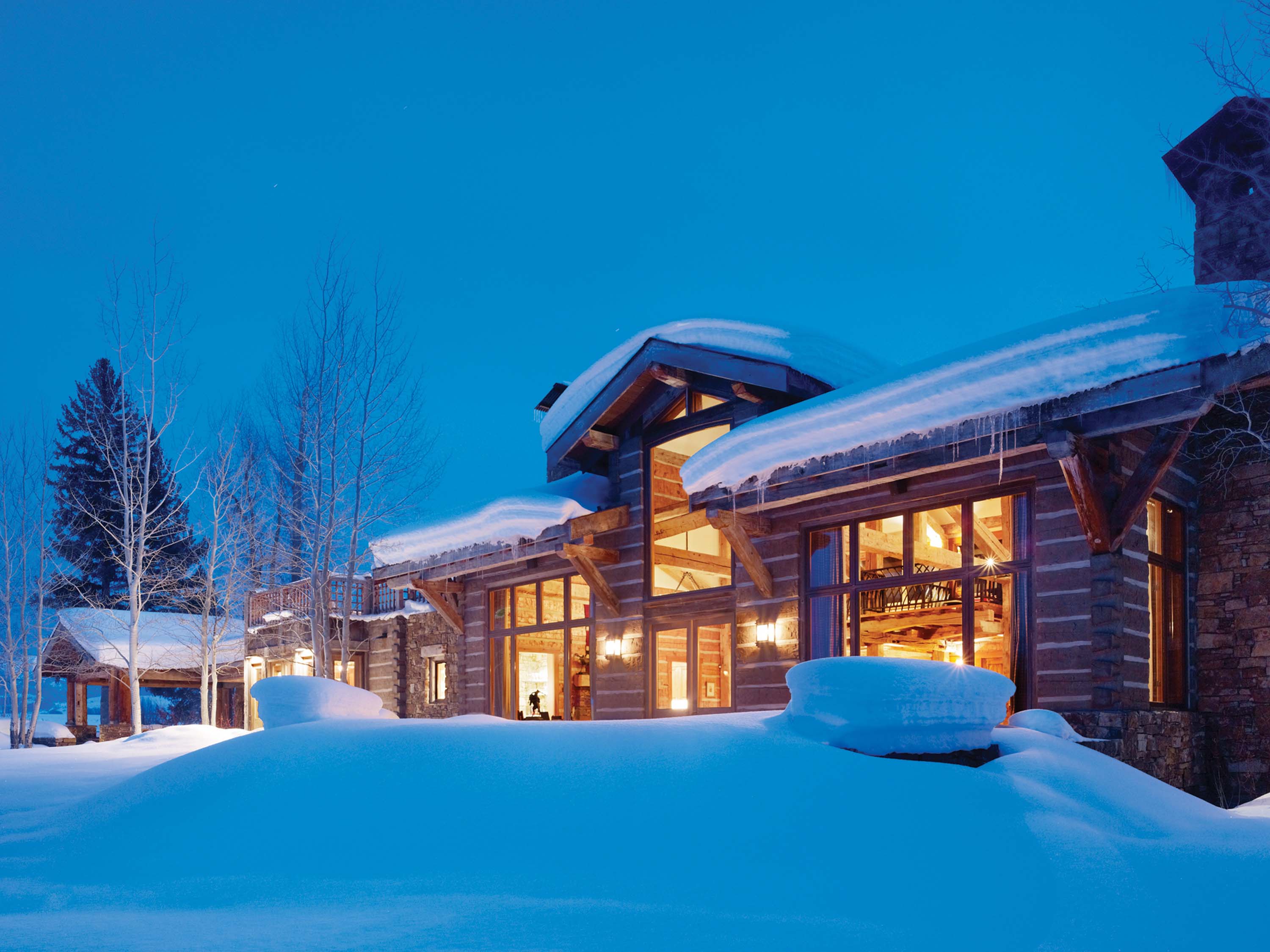 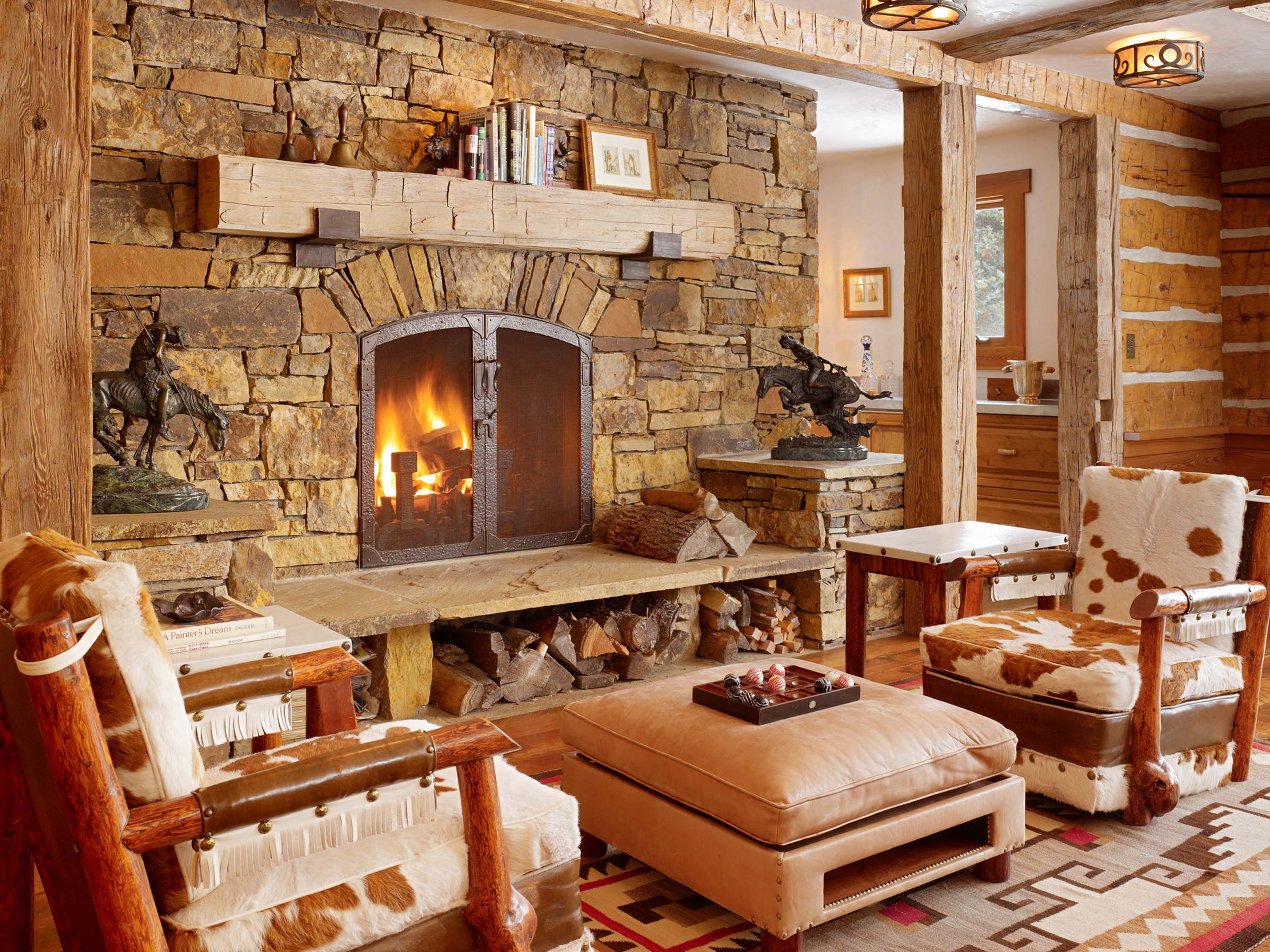 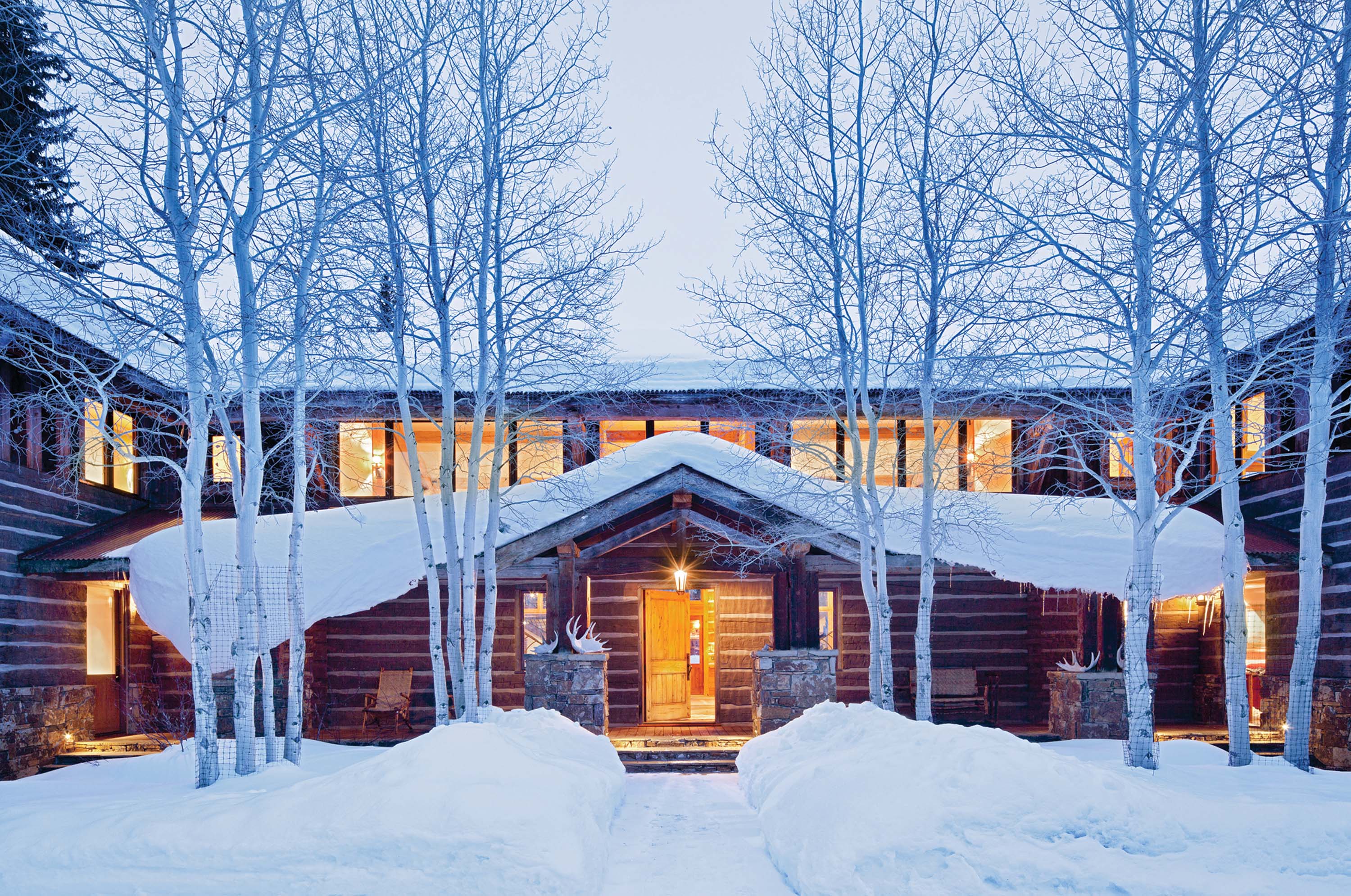 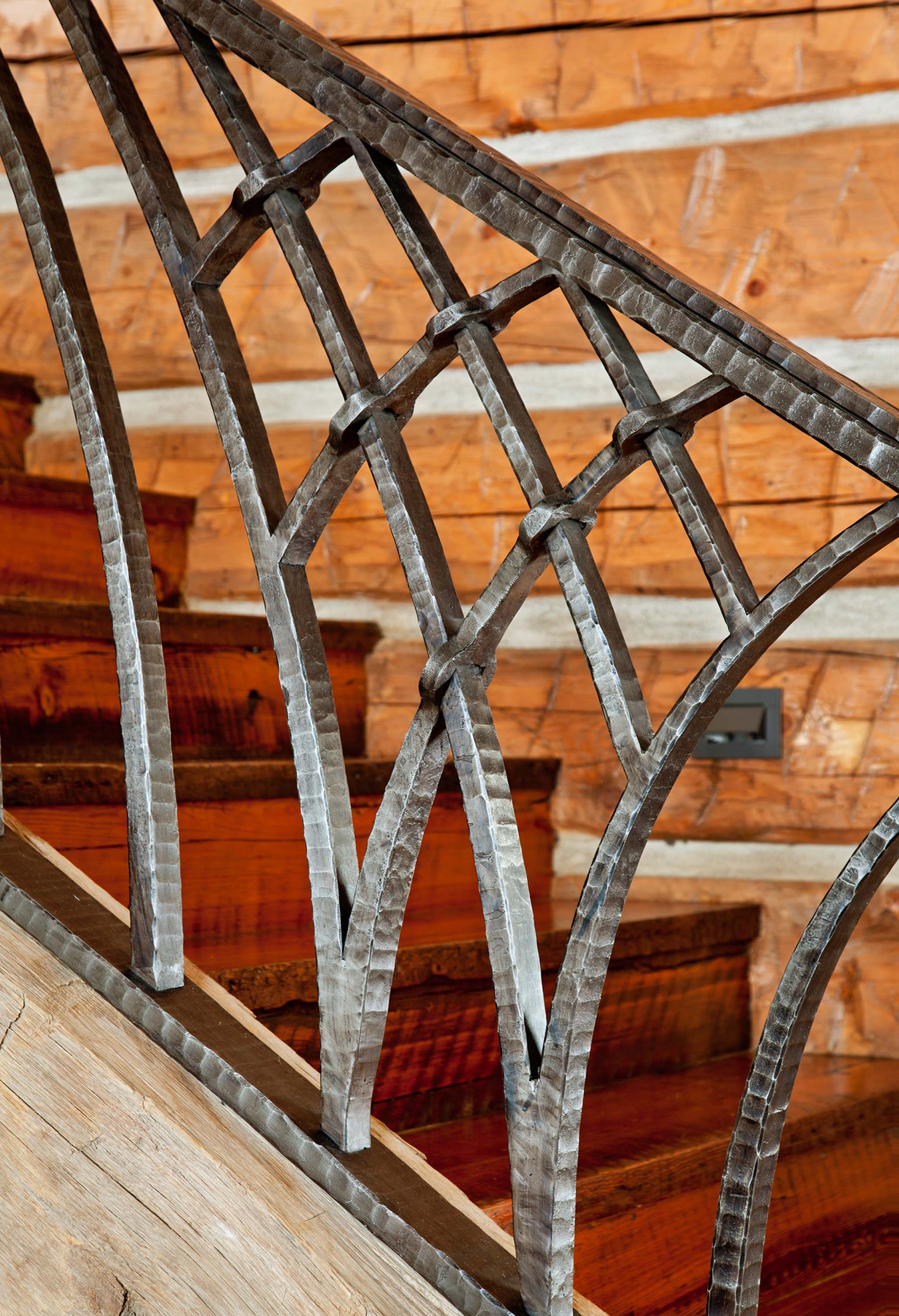 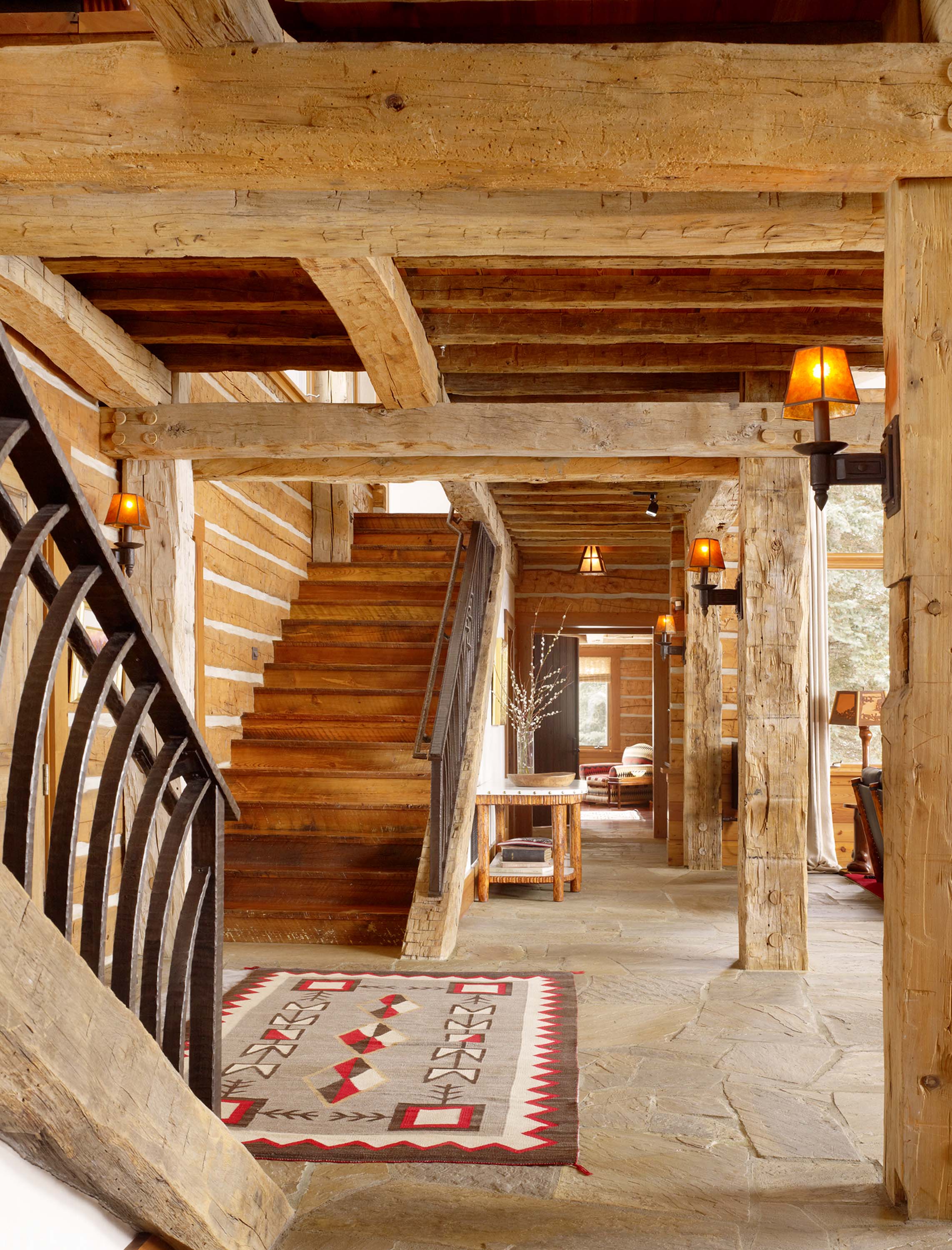 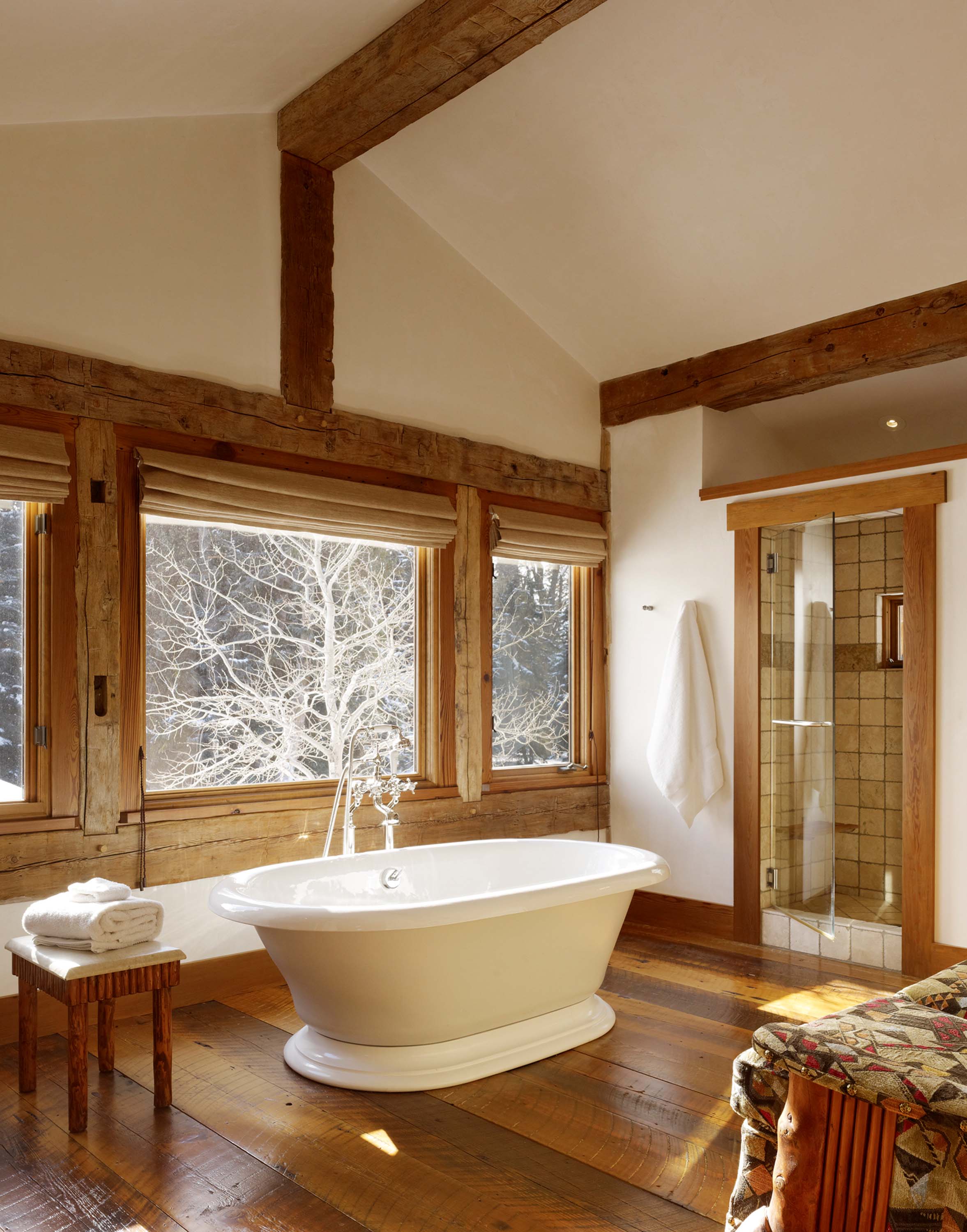 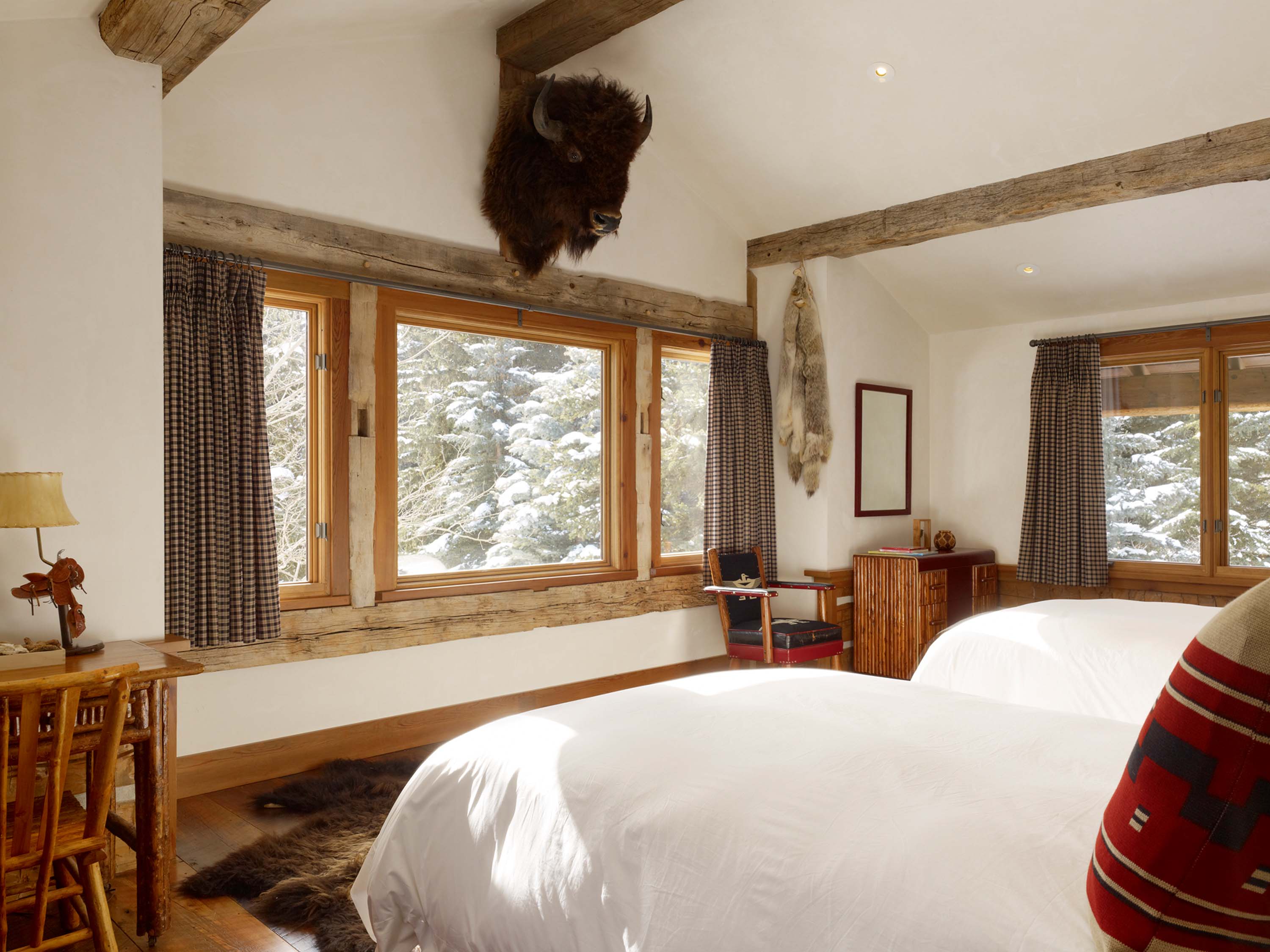