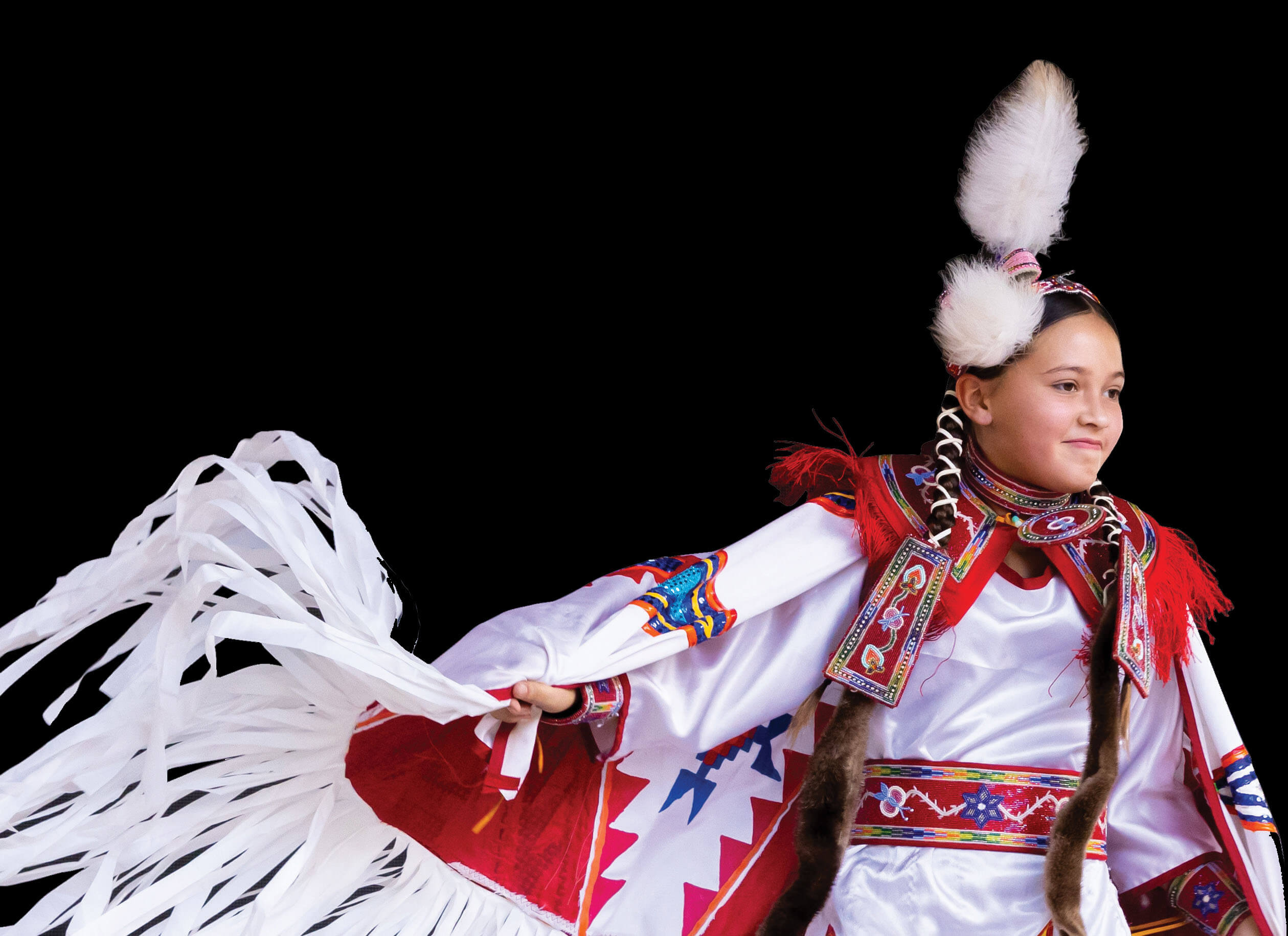 In 1922, Edgar L. Hewett, director of the Museum of New Mexico, opened the first Southwest Indian Fair and Industrial Arts and Crafts Exhibition in Santa Fe by simply stating, “The hour has arrived.” According to the original event catalog, the purpose of the first exhibit was “the encouragement of Native arts and crafts among the Indians; to revive old arts, and to keep the arts of each tribe and Pueblo as distinct as possible …” 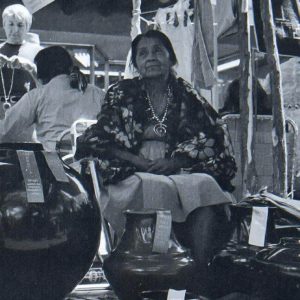 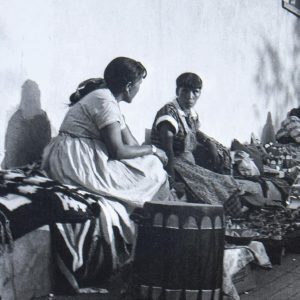 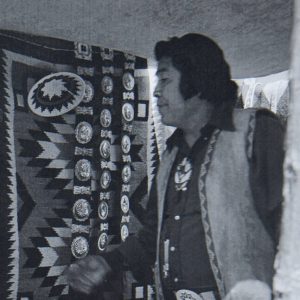 Making a sale, 1971, photo courtesy of Palace of the Governors Photo Archives, Negative 190710

Since then, Santa Fe Indian Market has grown to become the country’s largest annual Native American art event. In honor of the 100th anniversary, Kim Peone, the executive director of the Southwestern Association for Indian Arts (SWAIA) — the non-profit that sponsors the market — is planning a celebration worthy of this important landmark, and positioning the non-profit for success in the next 100 years.

“We are planning as best as we can, coming out of the pandemic, trying to be proactive, as well as continue a path towards innovation,” says Peone, a member of the Colville Confederated Tribes and Eastern Band of Cherokee Indians. “For the first time since 2019, we will be using the whole footprint of the market, in and around the Plaza, down Lincoln, and all the usual streets. Also, for the first time ever, we will be using the Railyard [Art District], so there will be about 50 booths over there as well, and we are working on having electric bikes to transport people from the Plaza to the railyard.” 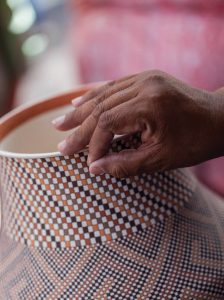 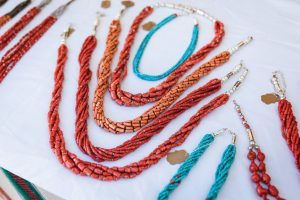 Jewelry brings out the crowds during market time, where the question on everyone’s mind is, “Whose piece are you wearing?” These bold coral and turquoise stones were crafted into jewelry by Mary Aguilar.

This year’s celebration, then, will be a return to normalcy, with all the bells and whistles of past markets, plus several more key events. Many of the biggest changes, including one major change, were implemented to help participating artists. “We would like to announce that for the first time ever, the Best of Show award will be $30,000 instead of the usual award of $10,000,” says Peone. “We have been putting together our sponsors and donors and all the beautiful people who support this organization to make this happen, and we are so proud to be able to offer this for the first time ever.”

Another change just in time for the centennial celebration is the return of the Native American Clothing Contest. This traditionally takes place on Sunday morning and is different from the contemporary fashion show that happens on Sunday afternoon. The contest is one of the most beloved and popular events of the weekend and includes categories for both traditional and contemporary styles as well as children’s fashions. 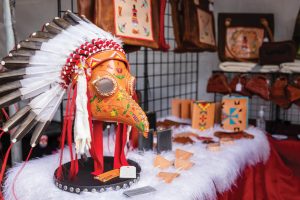 As the market has reinvented itself for the 21st century, a lot of the work is influenced by contemporary art stylings mixed with traditional processes and mediums. 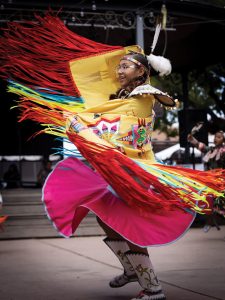 Along with rows and rows of artists’ booths, the market also boasts countless dancers and performers throughout the two-day event, some on stage and some impromptu on the streets. Photo: Tira Howard

“We are so excited to bring back these marquee events,” says Peone. “And we are so excited about the Native American Clothing Contest, as are the artists who participate. We are also excited to bring back the in-person gala, which will be Saturday night from 6 to 9 p.m. The theme is ‘Shiny Drop,’ which will be 1920s-style fashions. This will be where we really celebrate the centennial, so we are looking forward to it being a really fun event.”

Another change from previous years will be the addition of a VIP lounge at La Terraza inside La Fonda Hotel. “We’ve always wanted a way to honor our sponsors and donors,” says Peone. “The market is in August. It can be hot, and a lot of our buyers and guests are elderly. So, we wanted to provide them a spot to get cool, rest, put their feet up, have a cold drink, and just be able to relax. It can be a long weekend, and many of our guests are out there all day.” 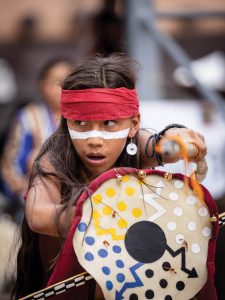 A young member of the Duncan family performs during a previous year’s market. Photo: Tira Howard 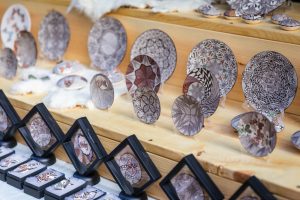 Along with traditional pottery and ceramics, collectors can also find a variety of mediums, such as this mask by artist Osceola Red Shirt.

The VIP lounge is sponsored by Illuminative, an organization that seeks to foster “meaningful participation from a diverse and committed collective of Native storytellers, artists, youth, organizers, tribal and grassroots leaders as well as non-Native partners in entertainment, media, and social justice.” 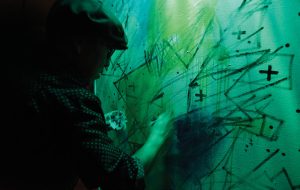 Randy “Boogie” Barton is one of the newer artists at Santa Fe Indian Market who brings work influenced by graffiti and street, b-boy, and urban fashions and cultures.

This partnership is symbolic of the way Peone is positioning SWAIA for the next 100 years. Her vision provides more partnerships than ever before, a future that reaches out to other organizations — both Native and non-Native — to come to Santa Fe and be a part of this special event. 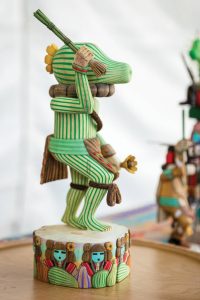 Hopi katsina carver Donald Lomawunu is a highly sought-after market artist and typically sells out of work before noon on the first day. Photo: Shayla Blatchford

“One of the things we are also initiating this year is concentrating on Native nations and Native communities and connecting with tribal leaders and giving them opportunities to share in our vision,” says Peone. “Also, for the first time ever, we will host a Tribal Leaders Dinner and literally invite them to the table to be a part of this weekend. The San Manuel Tribe in California has come aboard to be a full sponsor of the Gala Dinner, so we are already starting to see some of the various tribes sign on to be a part of this all. We have also reached out to SITE Santa Fe, and they may be a spot for the Native Cinema Showcase happening Saturday night.” 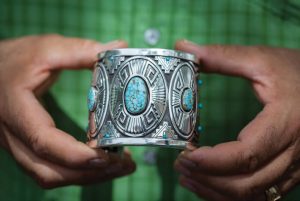 Peone sees all of this as vital to the long-term success of the organization. “Part of this journey has been the few employees we have at SWAIA working on the brand and vision of the organization and bringing us back to who we were,” says Peone. “Who we were in the glory days, who we are now, and who we can become. And we want our sponsors, donors, contributors, and artists to join us on that journey.”