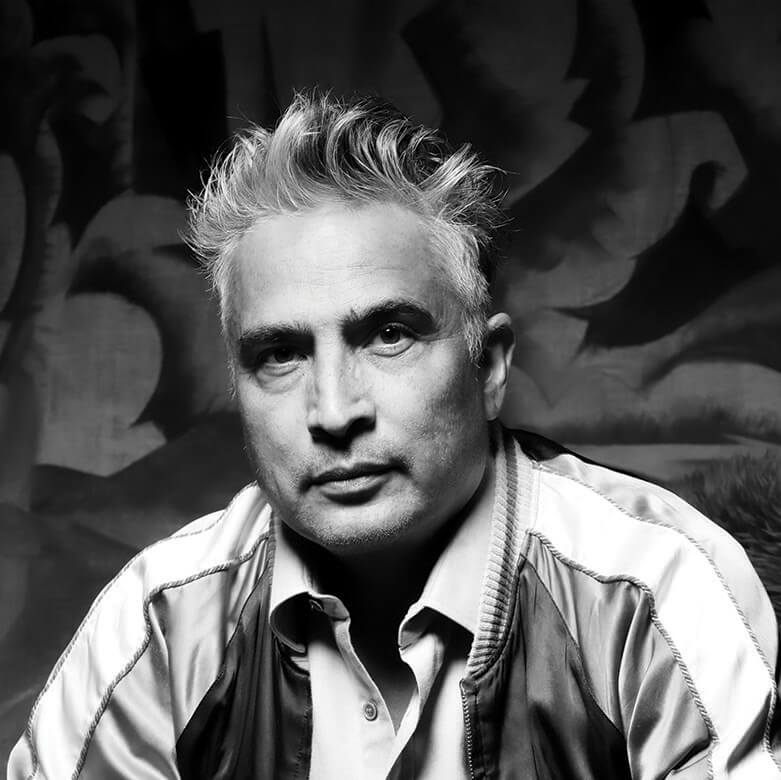 While Navajo painter Tony Abeyta isn’t participating in the Santa Fe Indian Market this year, he’s been a force in the contemporary art world since his career began in the late 1980s. This year, he won’t have a booth on the plaza, but running concurrent to Indian Market are two Santa Fe exhibitions: a solo show at The Owings Gallery, and the artist and his family are the subjects of a major exhibition at the Wheelwright Museum of the American Indian. 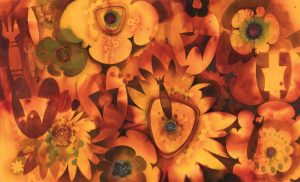 Abeyta’s exhibition at The Owings Gallery features a curated selection of his large landscape pieces, which became a focus for the artist as a way to survive the pandemic. Abeyta spent this time seeking little adventures in the expansive spaces between Santa Fe and Taos — going on hikes, rediscovering his favorite fishing holes, driving through the Sangre de Cristo Mountains, and traversing the land that famously appears in his stylized modern landscapes. 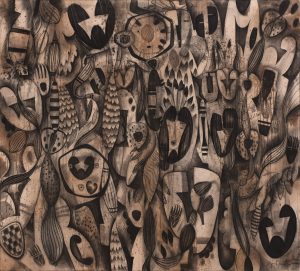 “The great part about Northern New Mexico is that it’s always changing,” says Abeyta. “Constantly. You can wake up, and it’s gray, hazy, wet, and will look like it will rain all day, but there will be a little bit of blue coming out, and then the clouds will clear. And the blue skies will take over. And this all happens within a window of four hours. You get the whole spectrum, and you never know what exactly will transpire.”

In Abeyta’s new landscapes, one only has to look closely to see a whole rainbow of blues streaming through the rivers, skies filled with ominous clouds, shadows quietly shifting from gray to blue to dark, and something relatively new to his work — wildlife: roadrunners, blue jays, magpies, lizards, raccoons, and anything else he sees on his hikes and fishing hole visits throughout Northern New Mexico. The solo show takes place at The Owings Gallery’s Marcy Street location, August 19 through September 30. 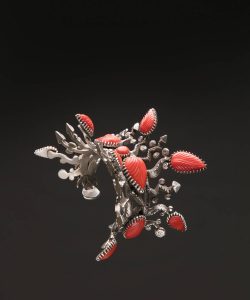 The exhibition at the Wheelwright Museum, Abeyta | To’Hajiilee K’é, ongoing through January 7, 2023, brings together for the first time the art of four members and two generations of the Abeyta family: father Narciso, sisters Pablita and Elizabeth, and Tony. “The exhibition title uses the Navajo word k’é, meaning family, love connection, and compassion, as it deepens our understanding and appreciation of this family’s oeuvre,” says Andrea Hanley, chief curator at the Wheelwright. “Though each artist has a distinct style and works in diverse media — including painting, sculpture, and silversmithing — all interweave common autobiographical narratives, complex Navajo beliefs and imagery, rich cultural histories, and explorations of art practice and storytelling.” 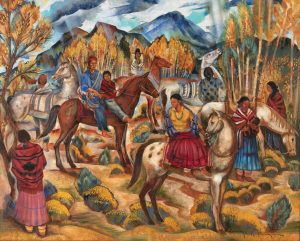 Born in 1918, Narciso moved to Santa Fe to attend the Santa Fe Indian School, where he was taught by Dorothy Dunn. He later became a Code Talker during World War II and then studied art under Raymond Jonson. One of Tony’s favorite stories of his father is when he first left to attend the Santa Fe Indian School at 17 after growing up in Cañoncito. “He was too young to go to the school, but allowances had been made for him to study directly in the studio of Dunn, so he decided to go anyway with a friend, and they slipped away in a wagon without anyone knowing,” says Abeyta. “His parents didn’t know where he went, so after a few weeks, they thought he had died, frozen in that cold winter’s snow. But then, when spring arrived, he showed up in this new suit, looking fresh like he had come back to life, and then they realized where he had been.” 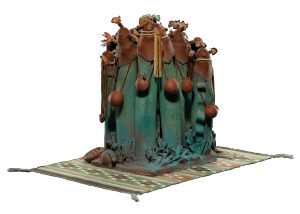 For Abeyta, the museum exhibition is an opportunity for people to see the brilliant creativity that came from his family over the years — not just the paintings by son and father, but also the beautifully conceived ceramic work that each of Abeyta’s sisters made during their lifetimes. Many of these pieces are part of the artist’s private collection and were loaned to the museum for this exhibition. 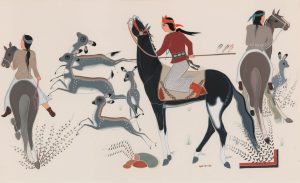 “I grew up in a home where projects were always at hand,” says Tony, who was born in Gallup, New Mexico, in 1965. “There were clay vessels being worked on across the kitchen table; there was the smell of casein paint emanating from my father’s bedroom studio; there were woodworking tools; belt sanders; beads ready to be strung; and books falling off every shelf; and washed wool ready to be carded, spun, and woven on looms.” 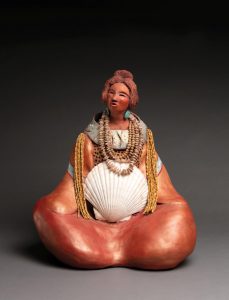