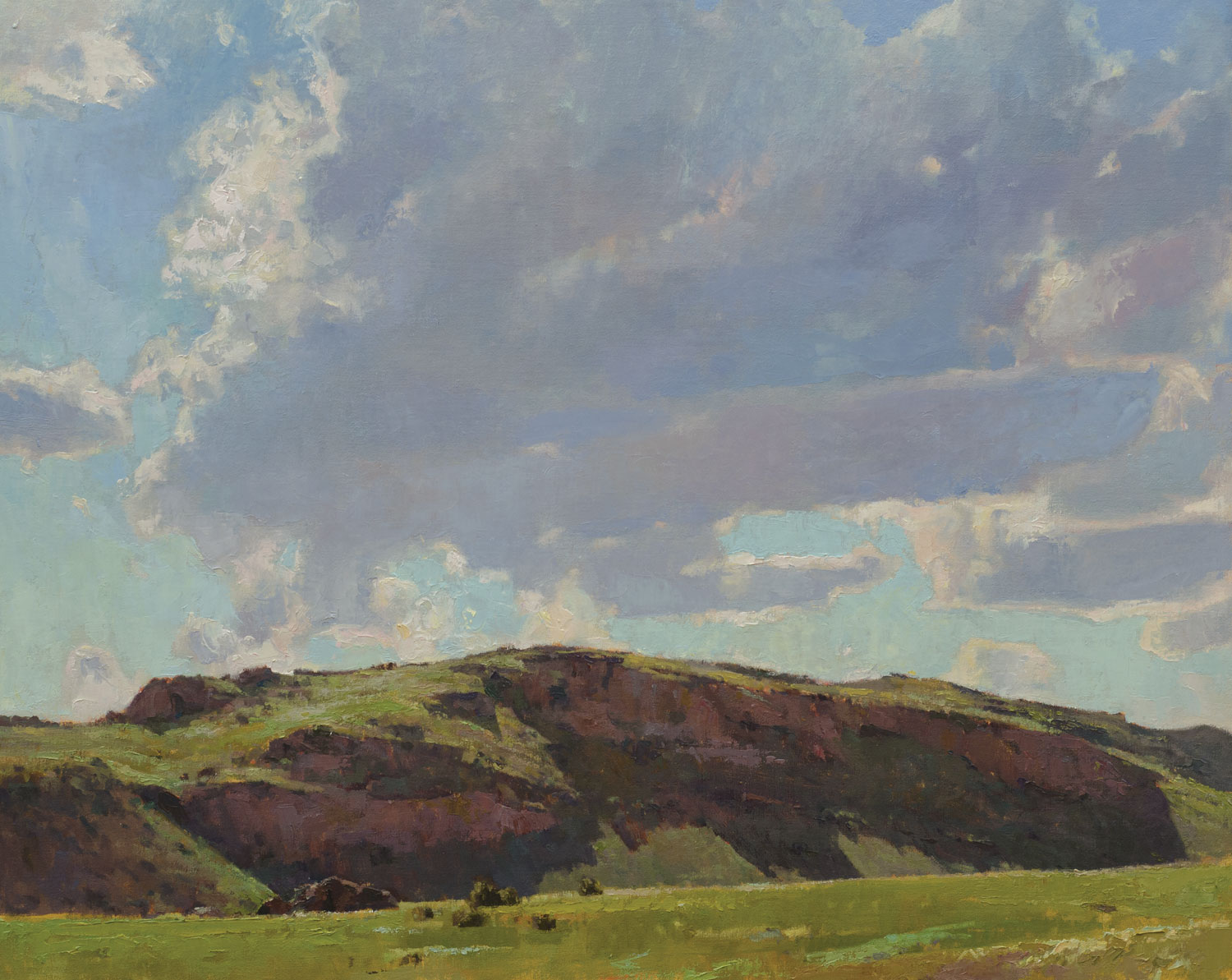 09 May Celebrating the West’s Extraordinary Vistas

EARLY ON HIS FRIST MORNING IN Longmont, Colorado, in August 2004, artist John Taft made his way through rooms full of moving boxes and out the front door. He headed straight for a nearby spot from which he could see the mountains, more than ready to sketch, paint, photograph, and explore. After a successful 18-year career as a designer and art director for television networks in New York City, Los Angeles, and Minneapolis, and a long period of soul searching, Taft had made the risky decision to leave the design field and pursue landscape painting in the West. With his wife and four children under the age of 10, he packed up everything and left New York. 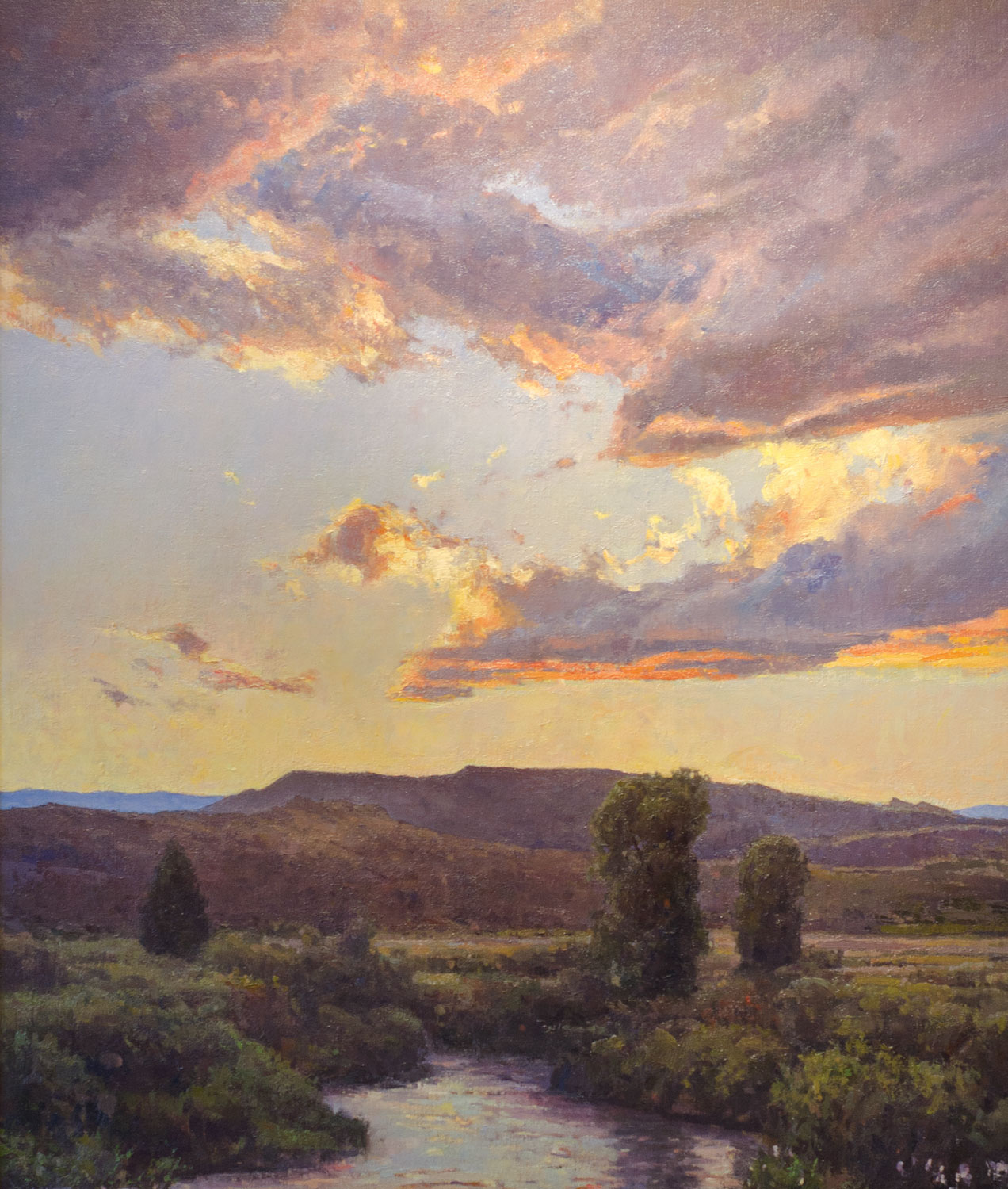 As he stood at his easel that morning beside a dirt road, gazing toward the mountains, a jogger stopped to chat. As it happened, the man, the first person Taft met in Colorado, was landscape painter Jake Gaedtke. An accomplished painter, Gaedtke also happened to be a founding member of the Rocky Mountain Plein Air Painters. During their first encounter, Gaedtke invited Taft to join a weekly life-drawing group. A year later, Taft took part in his first plein air show. Six months after that, he was selected to be in the Oil Painters of America Central Regional Show, and the next year, he earned an Award of Excellence for Best Landscape at the 2006 Oil Painters of America National Exhibition. Clearly, Taft had made the right choice in pursuing landscape painting.

Taft’s entrance into the Western art world was perfect timing in other ways as well. Marc LeVarn and his partners at Vail International Gallery had been waiting five years for the right Western landscape painter to add to their stable of emerging contemporary artists. As soon as they saw Taft’s work, they knew their wait was over. “We immediately knew he was able to capture the majesty of the local landscape, and we could tell he was an artist who was going to grow,” LeVarn says. “His style is a crossover with contemporary, but he doesn’t compromise his fidelity to the truth of the natural surroundings.” 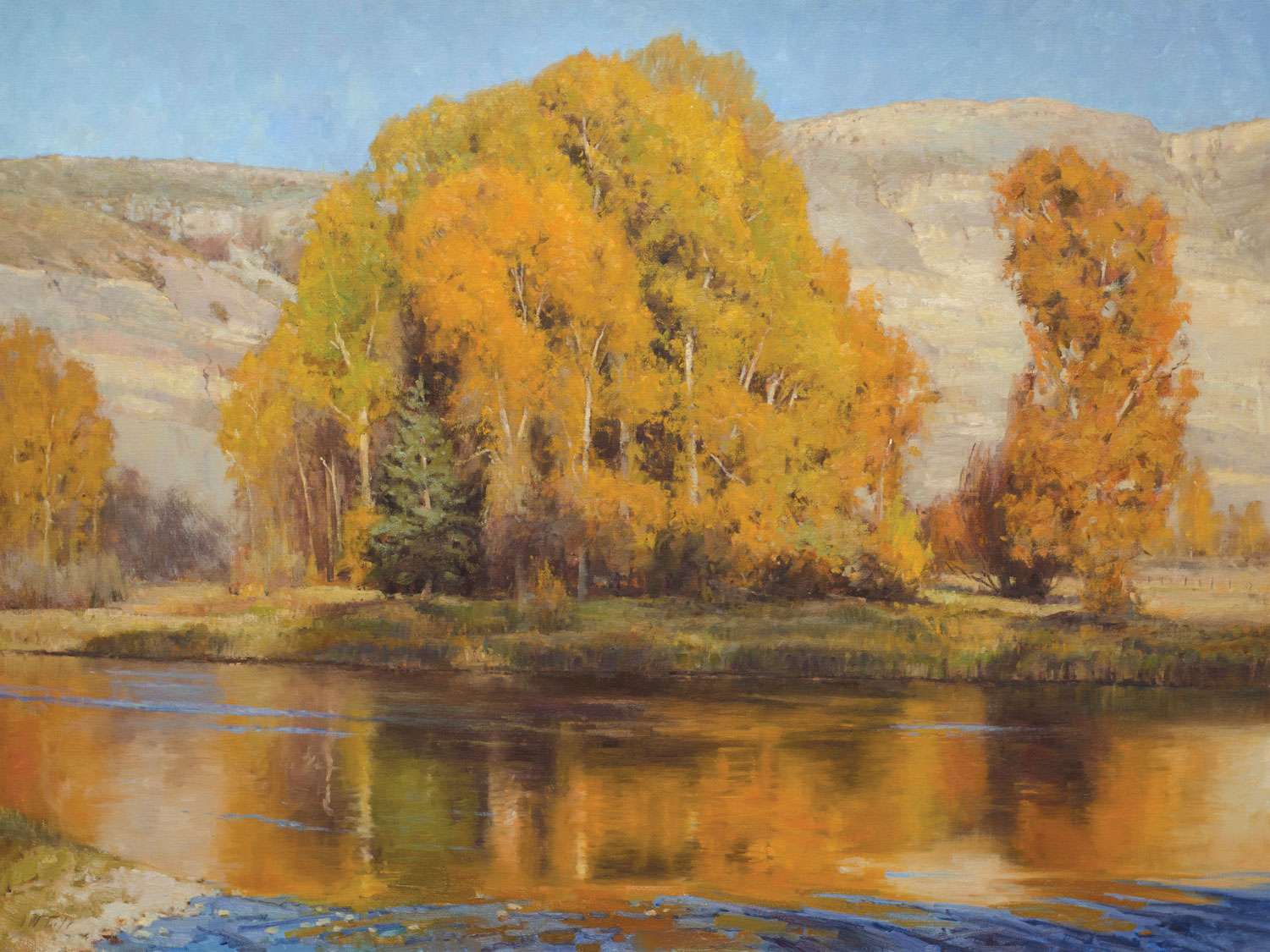 Taft has had multiple solo exhibitions at Vail International since 2010, with the next one opening July 6 and continuing through July 20. A two-artist show with painter David Dibble opened in May and will run through June 6 at Mockingbird Gallery in Bend, Oregon. In addition, Taft will be featured in a solo exhibition at Sage Community Arts in Sheridan, Wyoming, November 27 through January 18, 2020. 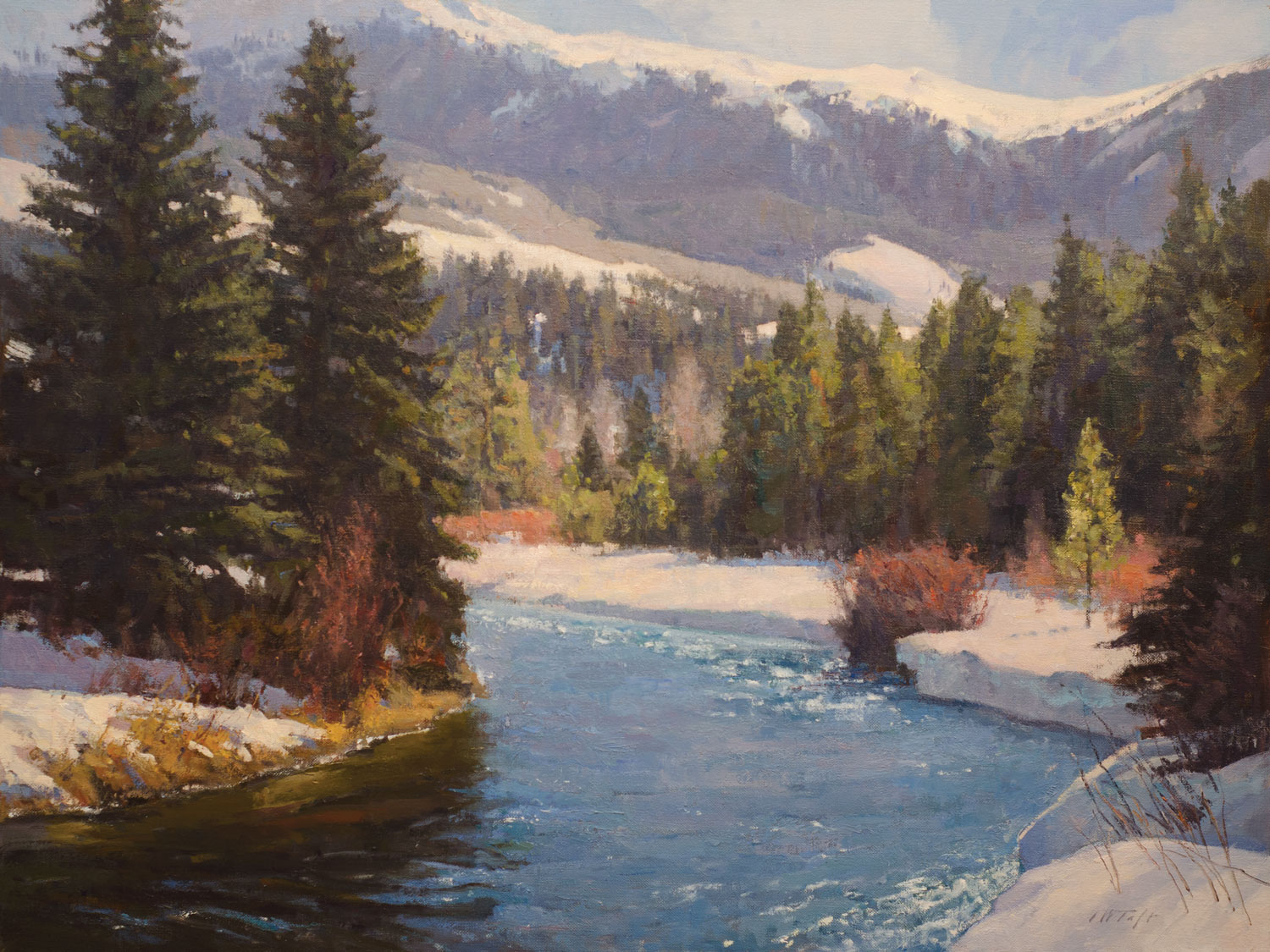 Although it would seem Taft emerged from his shell ready to fly, in many ways his design career and even his childhood were incubators preparing him to create fine art. As a boy and teenager on his father’s tree nursery near Buffalo, New York, he observed the natural world, worked with his hands, and spent time outdoors in every kind of weather — all prerequisites for plein air painting. He often found himself alone in tedious tasks like driving a tractor, cultivating not only fields but also an ability to use his imagination and think for himself.

On the artistic side of things, Taft remembers a pivotal moment at age 4. He came across a drawing his mother had done of a lamp in the family’s living room. Intrigued by the idea of actually looking at something and drawing it, he sat down and drew the same lamp. “Before that, I drew out of my head, but this was fascinating,” he says. Three years later he accompanied his parents to a show by a local landscape painter for whom his father had done some work. Inspired, he went home and created 20 landscape paintings in tempera paint. They came from his imagination, but the experience was a taste of what was to come. 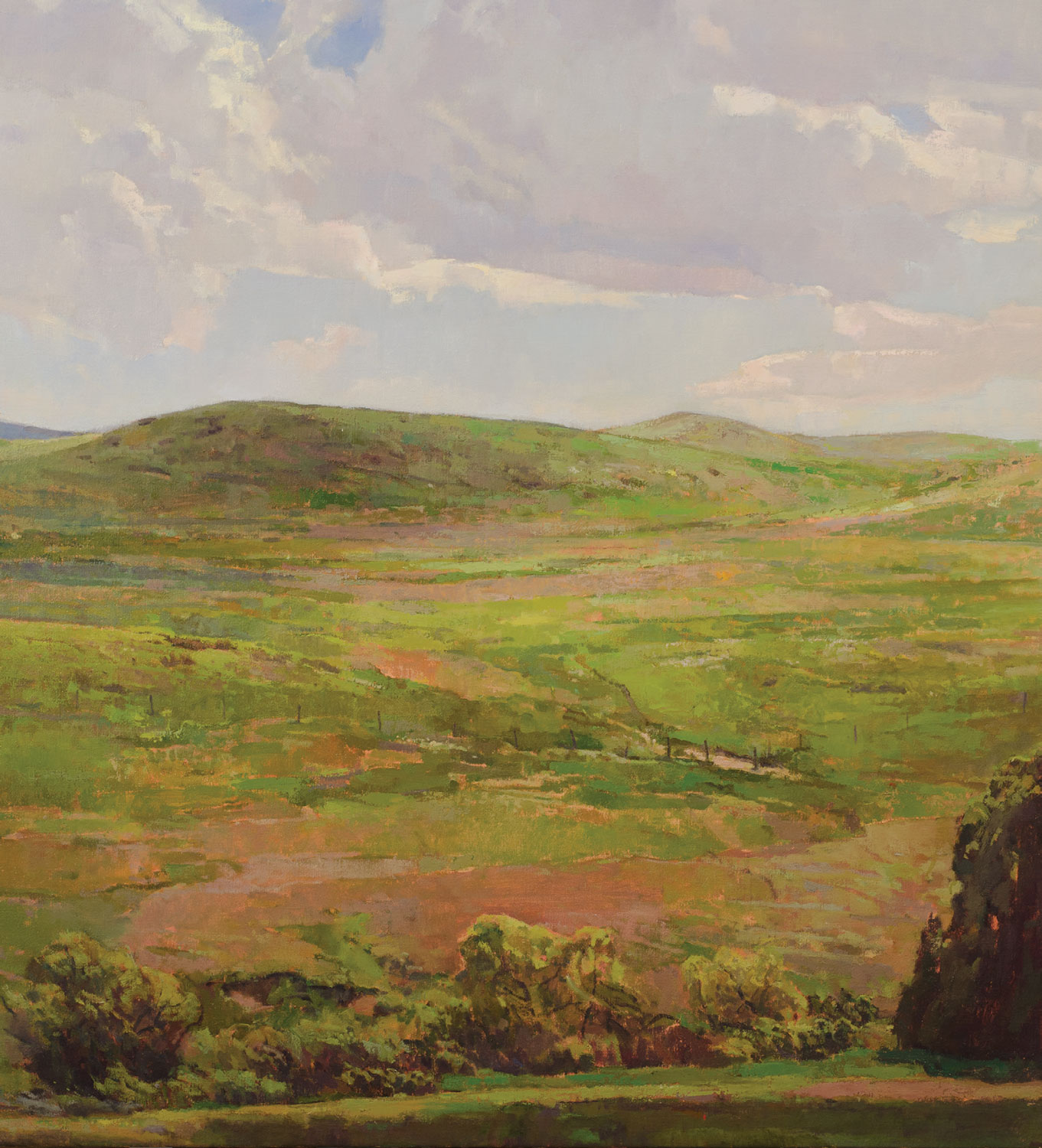 Still, imagining himself as an artist and making a living at it were two different things. After high school, Taft attended Rochester Institute of Technology for two years with the plan of pursuing architecture. The school’s design program included a yearlong art history course. Taft was introduced to the breadth of art across time, which “stirred my heart,” he says, adding that it motivated him to enroll at the ArtCenter College of Design in Pasadena, California. There, painting instructor Dan McCaw stimulated his interest even more. But again, the question of making a living loomed. When a friend pointed him toward a design group in the television field, he set off on that path.

Taft became one of the first designers to train in the use of early, high-end digital painting programs. During almost two decades in the business, he designed and art-directed everything from graphics to logos, animation, green screen backgrounds, and even backdrops for Academy Awards presentations. It wasn’t painting, but the work incorporated all the dynamics of color, movement, and impact that must be there to catch the eye. 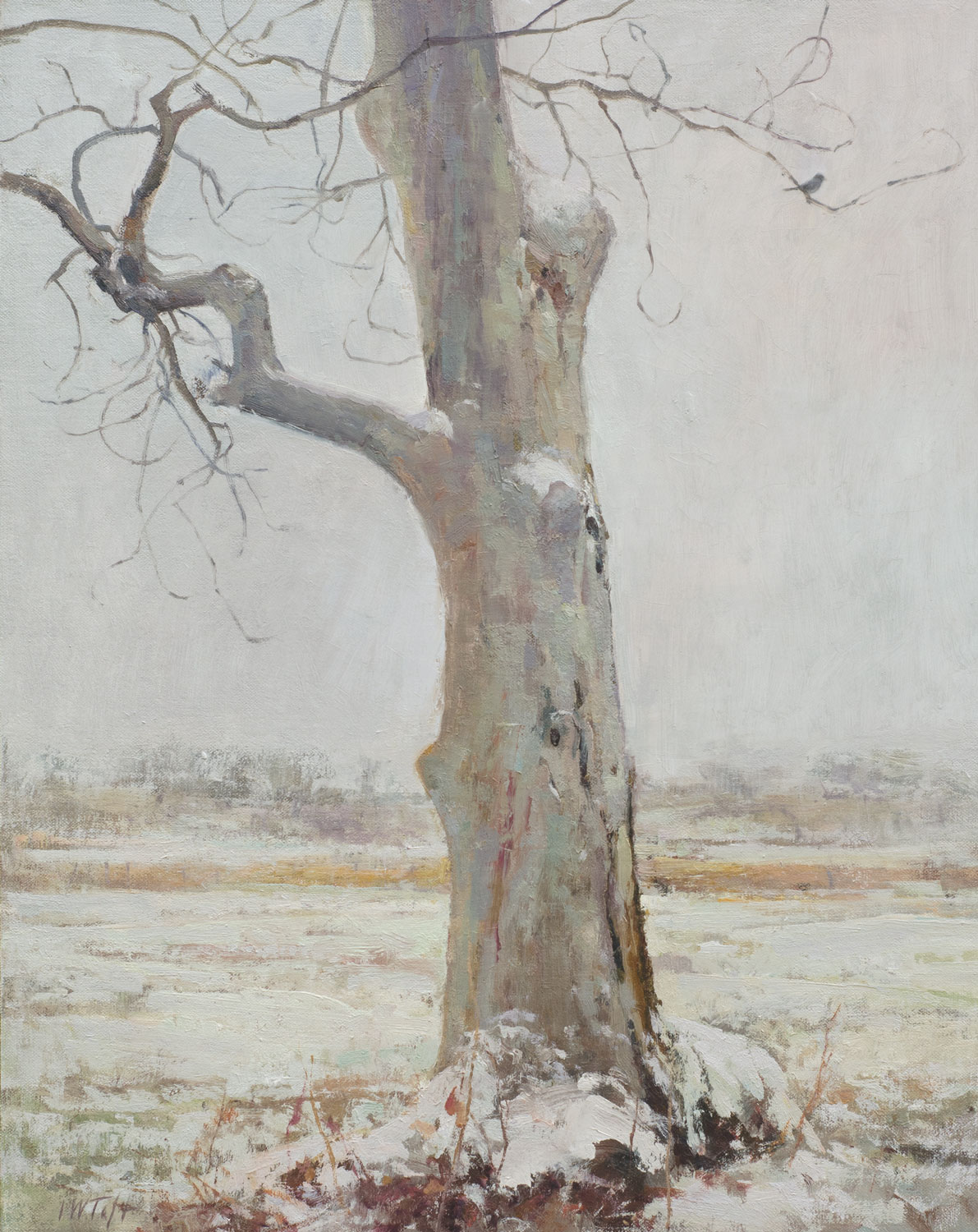 Living in New York City for 14 years also gave Taft the chance to spend time in art museums where he studied drawing and took part in a life-drawing group. Eventually the desire to paint led to his first plein air workshop with Jim Wilcox in Jackson Hole, Wyoming.

Then two decisive events took place. Taft was on a New York City bus, on his way to work, when he looked up to see smoke and debris projecting from the side of the first of the Twin Towers, which had just been hit. Not long after 9/11, artist Makoto Fujimura began a weekly gathering of artists near Ground Zero to share reflections on art, faith, and purpose. The meetings “increased my sense of art as something I felt called to do,” Taft says.

The second event happened three years later. The artist found himself dissatisfied with his hands-off design-directing job at the time, and his boss agreed it wasn’t a good fit. It seemed that the time to pursue fine art was now or never. Taft credits his wife, Lisa, who encouraged him to take the leap into his own creativity. “If you’re going to jump into the rapids and you wait until the water calms down, you’ll never do it,” he says. So they jumped. Lisa home-schooled their children in Colorado, and Taft began painting at least two days each week in Rocky Mountain National Park.

For six months he only worked en plein air. But the need to grow as an artist and a desire to spend more time with his family changed that. He converted the garage into a studio, took more workshops, and began translating on-location works into larger pieces. With his kids doing schoolwork in the next room, he would occasionally interrupt them and invite their critique of a painting in process. Even when they were young, he says, their intuitive sense of aesthetics was often right. “They’d say, ‘Dad, what’s going on with that part of the painting?’ And I’d say, ‘Darn, I was wondering about that myself!’” he says, laughing. 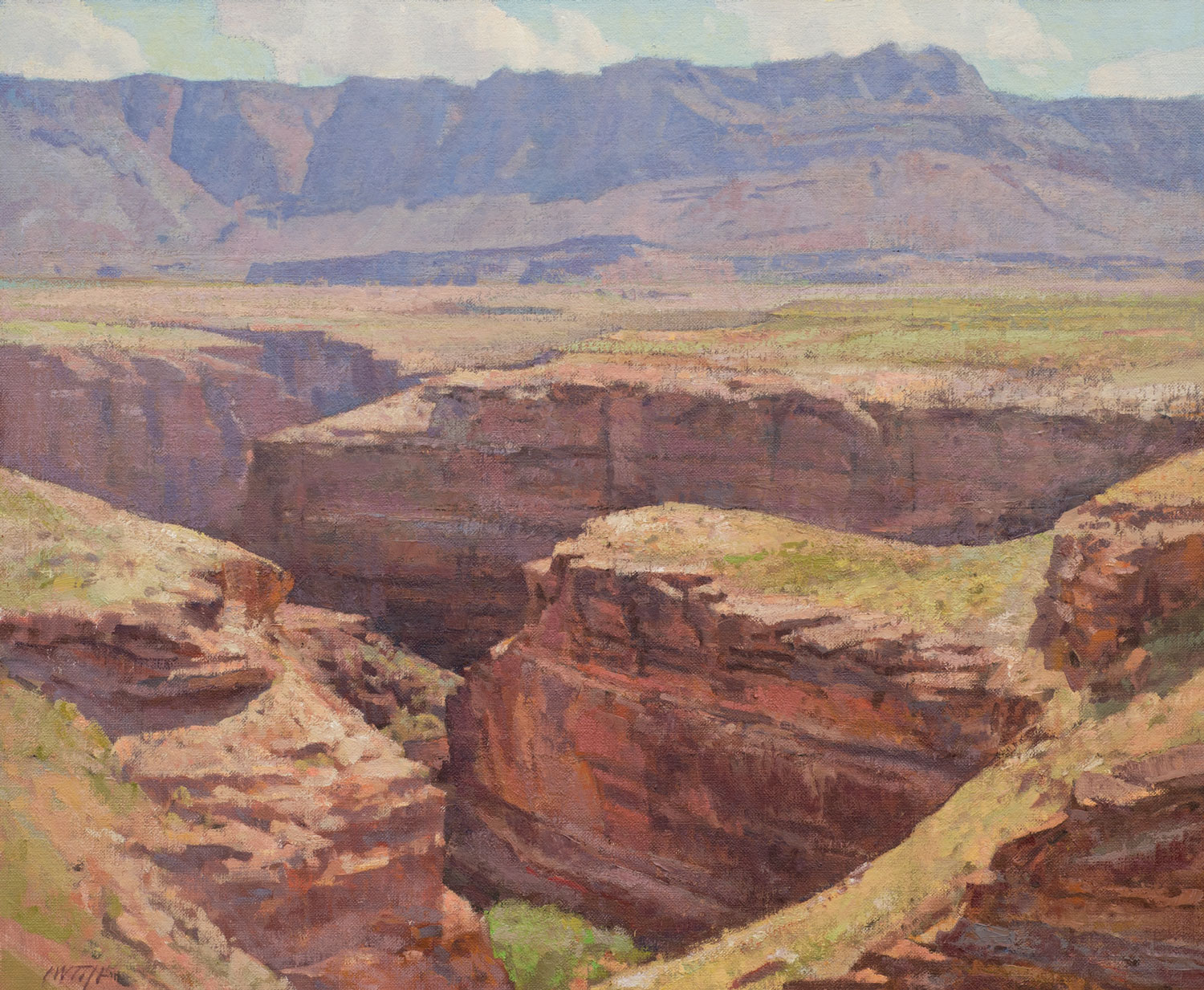 Taft rarely creates a studio painting without having first painted something at that location. Simply rendering any part of a landscape seems to prime his perceptual pump. After one afternoon that was not particularly inspiring, for example, a green hill on the way to Red Feather Lakes suddenly struck him with its compelling, ordinary beauty. The result was Summer Verde, and this period of exploration painting and sketching “opened my eyes so I could see something special,” Taft says.

The gift of being stopped in the midst of life and suddenly seeing nature’s often-subtle magnificence is part of what Taft aspires to offer viewers. The work of such artists as Jean-Baptiste-Camille Corot, Andrew Wyeth, and George Carlson encourages him in his quest to “find everyday things that become amazing,” he says, adding that art that touches the viewer involves more than realistic rendering. “Abstract elements come together to express our humanity, as opposed to something that feels cold and digital,” Taft says. Mockingbird Gallery owner Jim Peterson agrees. “John’s art is a hybrid of realism and impressionism, and because of that, it appeals to us on different levels. There’s a lot of character in the surface work, but he also pays tribute to the tradition of landscape artists that have come before. There’s truly a timeless sophistication to what he’s doing.”

For his part, Taft is still willing to jump into the rapids, taking chances by not always painting the way it “should” be done.

“I’m not making it perfect, I’m trying to make genuine, intentional marks,” he says. “I may know a painting is going someplace and not be sure where, but I’m following it. It becomes a process of exploring.” He smiles, remembering his earliest days of inquiry. “My thought was: Give me a year, and I’ll learn to paint,” Taft says. “Fourteen years later, I’m still learning to paint! You don’t arrive.”