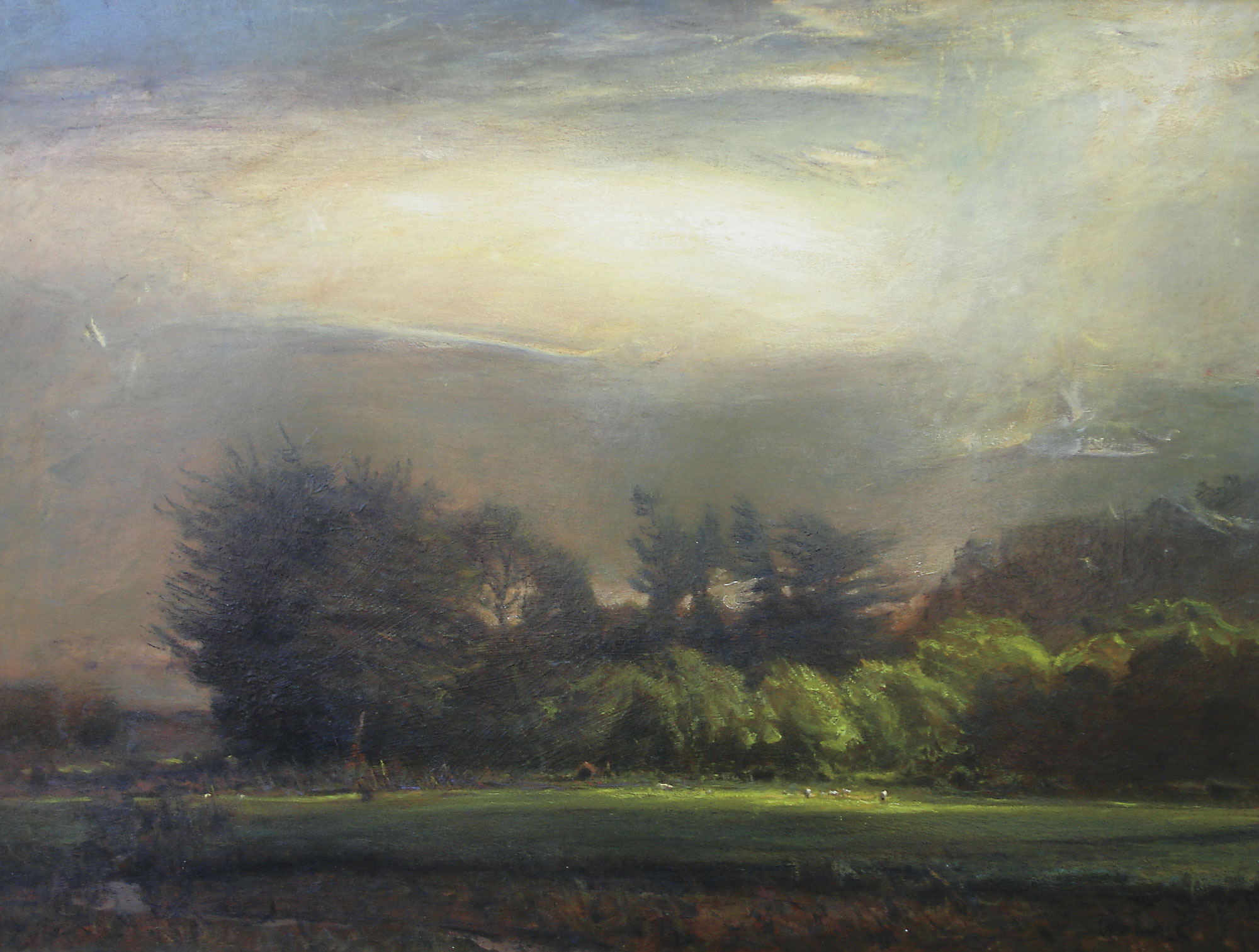 TONALIST PAINTERS HAVE ALWAYS BEEN REBELS, choosing to convey intimate and personal responses to nature, rather than conventionally duplicating natural scenes. And like most art movements the style began as a reaction to accepted forms of the day. Though the Tonalist style began amidst the Industrial Revolution, it is as relevant today, in the thick of the computer age, as it was then. The art form links viewers to the simple majesty of nature; and the artists who create the work project nature through their own unique interpretations.

Once known as Moody or Luminists, Tonalist artists are known for their images of hushed, pensive times of day, often twilight, dawn and moonlight. The work revolves around themes with limited color scale, and relies upon tonal hues to create changeable moods of light and atmosphere. Three characteristics are essential to every Tonalist painting: a simple unbroken horizon line; low-key color harmony; and diffused and diminished lighting effects.

The early masters that influenced today’s Tonalist painters include George Innes, Bruce Crane and James McNeill Whistler. Today, among the artists in the West who continue the tradition of creation and rebellion are Michael Workman, Gordon Brown, Brent Cotton and the father of Contemporary American Tonalism, Russell Chatham.

From its origins in France, Tonalism moved west

The Barbizon School (circa 1830–1870) of painters is named after the village of Barbizon, near Fontainebleau Forest, France, where artists gathered. The Barbizon painters were part of a movement toward Realism in art that arose in the context of the dominant Romantic movement of the time. The founders of the Barbizon School include Constant Troyon, Charles-Francois and the best known of the group, Daubigny Theodore Rousseau (not to be confused with naive artist Henri Rousseau). The group moved from Paris to Barbizon, causing quite a stir when its members began painting nature from an emotional rather than a formulaic approach. As natural scenes became the subjects of their paintings rather than mere backdrops to dramatic events, their work defied the established and expected Greek design format of balance.

The term “Tonalism” is a relatively recent addition to the lexicon of stylistic “isms” applied to the history of painting, and is derived from the study of music, where “tonal” refers to the relationship of individual notes to a keynote. It was James McNeill Whistler who applied musical terminology to visual art in the late 1800s by titling his paintings “harmonies,” “nocturnes” or “symphonies.” The term “Tonalism,” in relation to the artistic school of thought, was not coined, however, until 1972 when noted critic Wanda Corn identified the unique style and general movement led by Hudson River Valley painters George Inness and Whistler in an exhibition titled The Color of Mood: American Tonalism 1880-1910.

Though the school is well established, the form has not digressed much from its origins, says San Francisco art historian Harvey L. Jones. “From what I have seen regarding Tonalist painting in recent years, there seems to be very little difference in the basic tenets defining Tonalism as represented in the paintings of 100 or more years ago and the works created by the painters of today,” says Jones, who presented Twilight and Reverie: California Tonalist Painting 1890-1930, at the Oakland Museum in 1995. “The artists’ emphasis on effects of light and atmosphere in landscapes rely on the same pictorial devices of low-keyed harmonious color schemes in earth tones derived from nature, as [were] seen in the early Tonalist works that [continue to] influence the current painters,” he says.

Today, Tonalists share a common interest in the pictorial effects often found in the interaction of sky, water and landscape. Russell Chatham is considered a genius at taking this traditional form and interpreting it in a contemporary format. In his works such as Sweet Grass Creek or Storm in May, he creates a minimal landscape with a dramatic horizon line done in a dominant hue or tone. But it is the way the light is used to create a mood. His paintings are traditional Tonal works, only with a hint of contemporary abstraction, and his use of color, texture and light soften each image, creating a wistful effect.

“In my view, two among the best Tonalist painters of today are Russell Chatham of California and Montana, and Wade Hoefer in northern California,” says Jones. “Chatham, who is the grandson of the artist Gottardo Piazzoni, is a worthy successor to the best early California Tonalist painter. Russell Chatham’s distinctive atmospheric landscape style features Realist imagery rendered in subtle gradations of color tones and shadings. Wade Hoefer’s imaginative paintings emphasize the decorative aspect, also seen in some of Piazzoni’s works, especially in his mural style. The formal elements of line and shape in simple, reductive compositions suffused with a mysterious luminosity render his visions a poetic alternative to observable reality,” he says.

Russell Chatham has been painting for more than four decades and has had a major influence on most contemporary Tonalist painters. He is a self-taught artist and has been exhibited in more than 400 one-man shows and in museums and galleries. Notable art critic Robert Hughes is among Chatham’s diverse collectors, as are Paul Allen and actor Jack Nicholson. Chatham’s work eschews the narrative tendency of much Western art and presents landscapes that stand in intimate relationship to the human figure even in its absence.

“Because I am rather out of touch perhaps, I don’t think I understand exactly what a Tonalist is, or who made up the name, or when, or why,” offers Chatham. “My best guess however, is that it was coined to describe painters who use grayed or otherwise muted colors. This doesn’t narrow the field much though, does it, because with almost no exceptions there are no truly great brightly colored paintings,” the artist explains from his Montana studio. Although he eschews the title, Chatham is indeed considered the father of Contemporary American Tonalism.

Painter Michael Workman is an admirer of Chatham. “There is definitely a Tonalist movement going on, and I think the best living Tonalist landscape painter is without a doubt Russell Chatham, with Mark English a close second,” explains Workman from his Utah studio.

Workman never set out to become a Tonalist; he began working as an architectural renderer. Although he is part of the Tonalist movement, he prefers the label of a contemporary traditionalist. Workman is noted for paintings that evoke a pensive emotion and calm mood. Having painted for more than 20 years, Workman’s paintings are found in museum collections throughout the world.

“Russell seems to have an innate ability to ‘pare down’ to the barest of essentials, and that minimalist approach adds great power to his work,” says Workman. “Mark English, on the other hand, has taken the obvious influence of the 18th-century French painter Edouard Vuillard … and translated it into a beautiful personal expression of the landscape. I admire and honor both of these contemporary painters.”

Workman is quick to point out the misconception that Tonalist paintings are necessarily dark and brooding. “For me, Tonalism is all about harmonious relationships. The values do not have to be dark nor the chroma subdued for a painting to be peaceful and harmonious; and this harmony is the purpose of Tonalism,” Workman concludes.

Montana artist Brent Cotton paints to evoke a response from his viewers that rivals his own. “For me personally, I strive to recreate on canvas the moments that speak to me on an emotional and spiritual level, and if in so doing my works elicit a similar reaction in the viewer then I feel I’ve succeeded,” he explains. Cotton’s paintings have an Old World feel; they utilize deep rich earth tones and dramatic lighting effects. He is inspired by mood and drama, the fleeting effects of light.

For Colorado artist Gordon Brown, there is a distinction between the Tonalist work he paints in his studio, and that which he paints plein air. “The paintings painted on location are much more direct in terms of color usage, whereas in the studio I often exaggerate the effect of light and atmosphere to change the mood of the painting.”

Brown’s studio paintings are inspired by his plein air works. But his Tonal works are those most collected. Brown is a master at capturing natural light in its most dramatic form. His Ocean Breeze and Grazing in Sunlight exemplify that ability. The light barely works its way through the sky creating a natural drama as it illuminates the landscape.

Today’s Tonalists continue to capture the ambiguity when light is fugitive and color and form are unified by a dominant hue or tone. They are passionate about luminosity, making their paintings appear to glow from some internal pearlescent light source. Though each artist has a unique mission and singular style, what unites Tonalist works is the evocative and emotional responses of viewers. 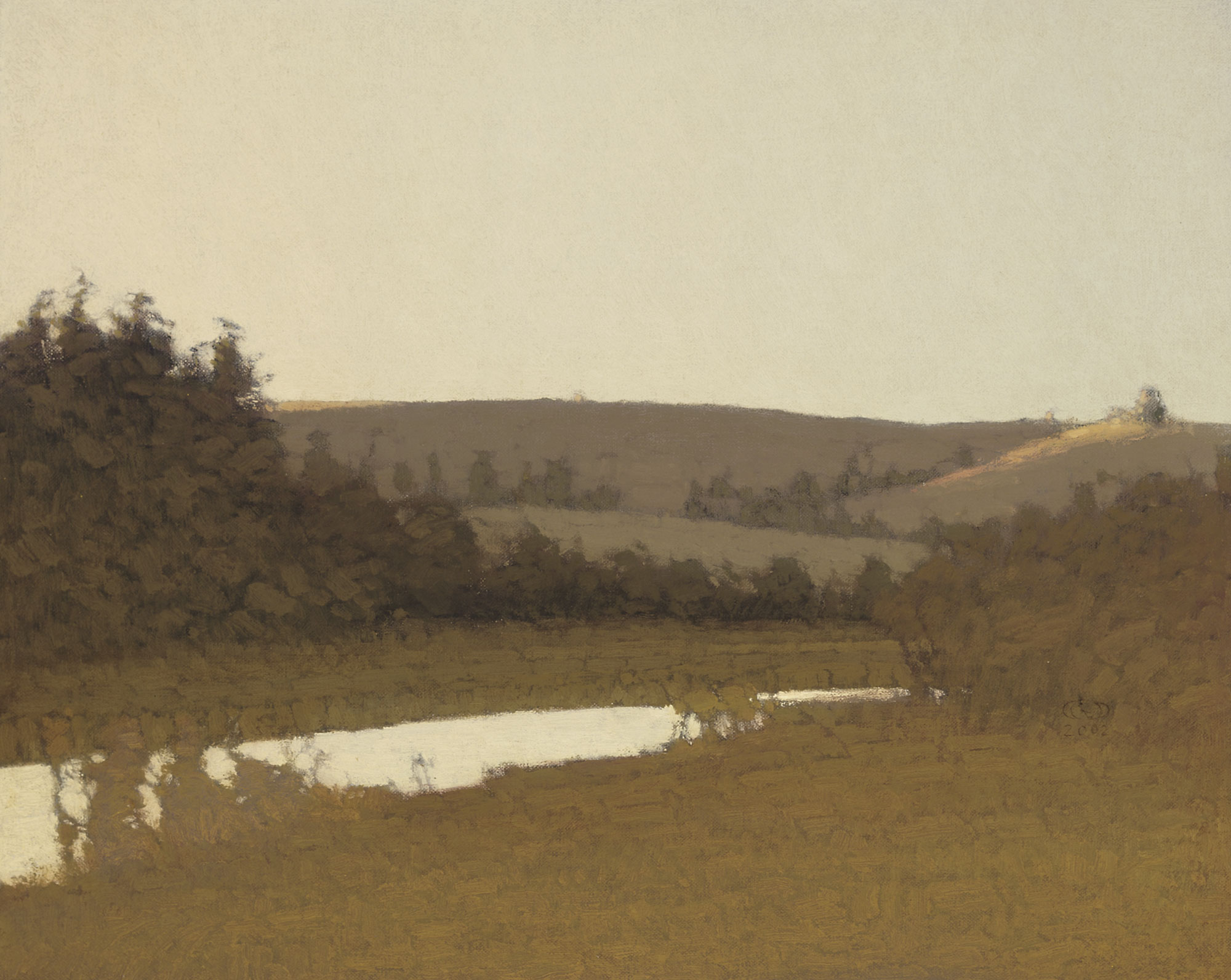 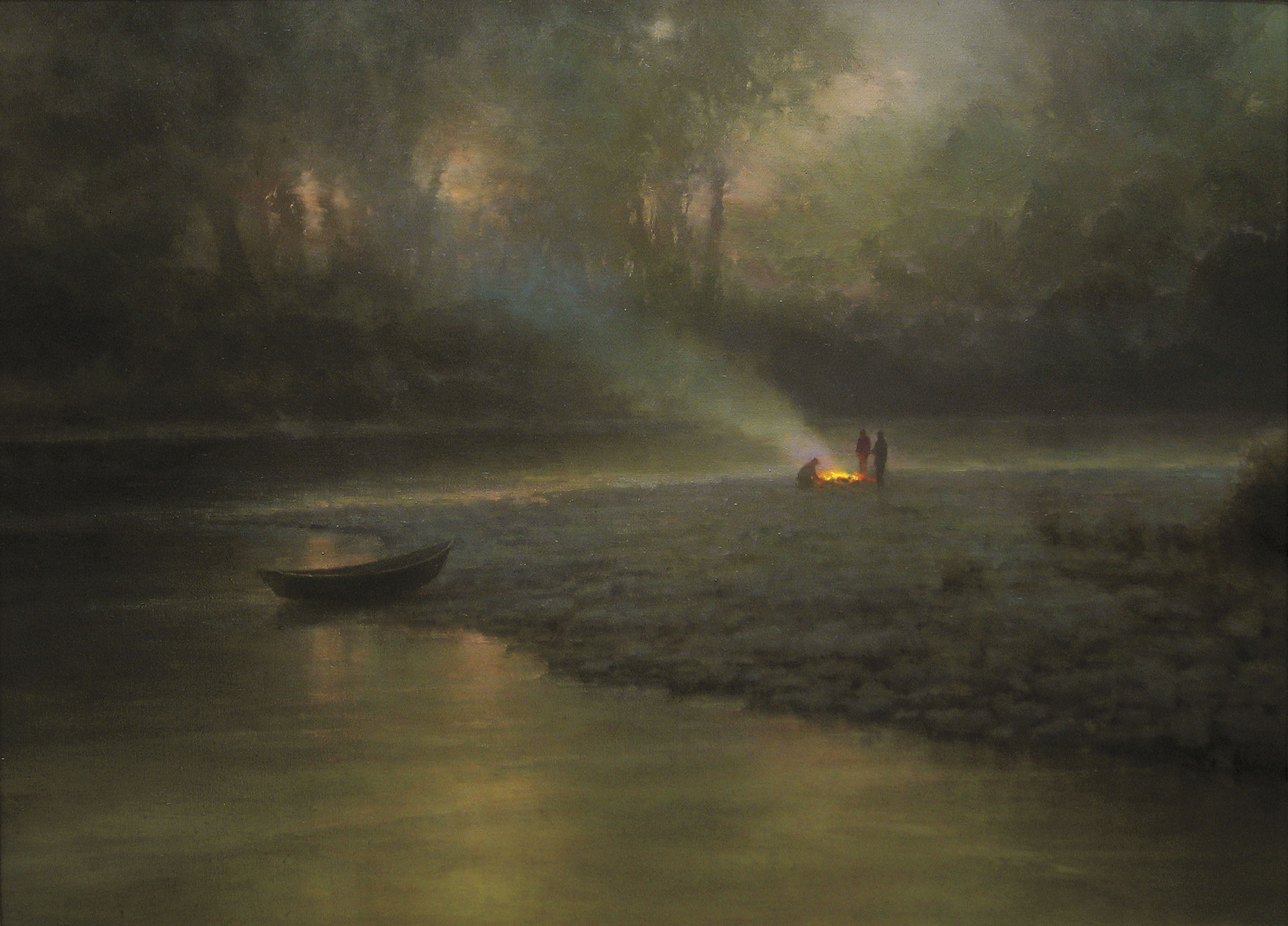 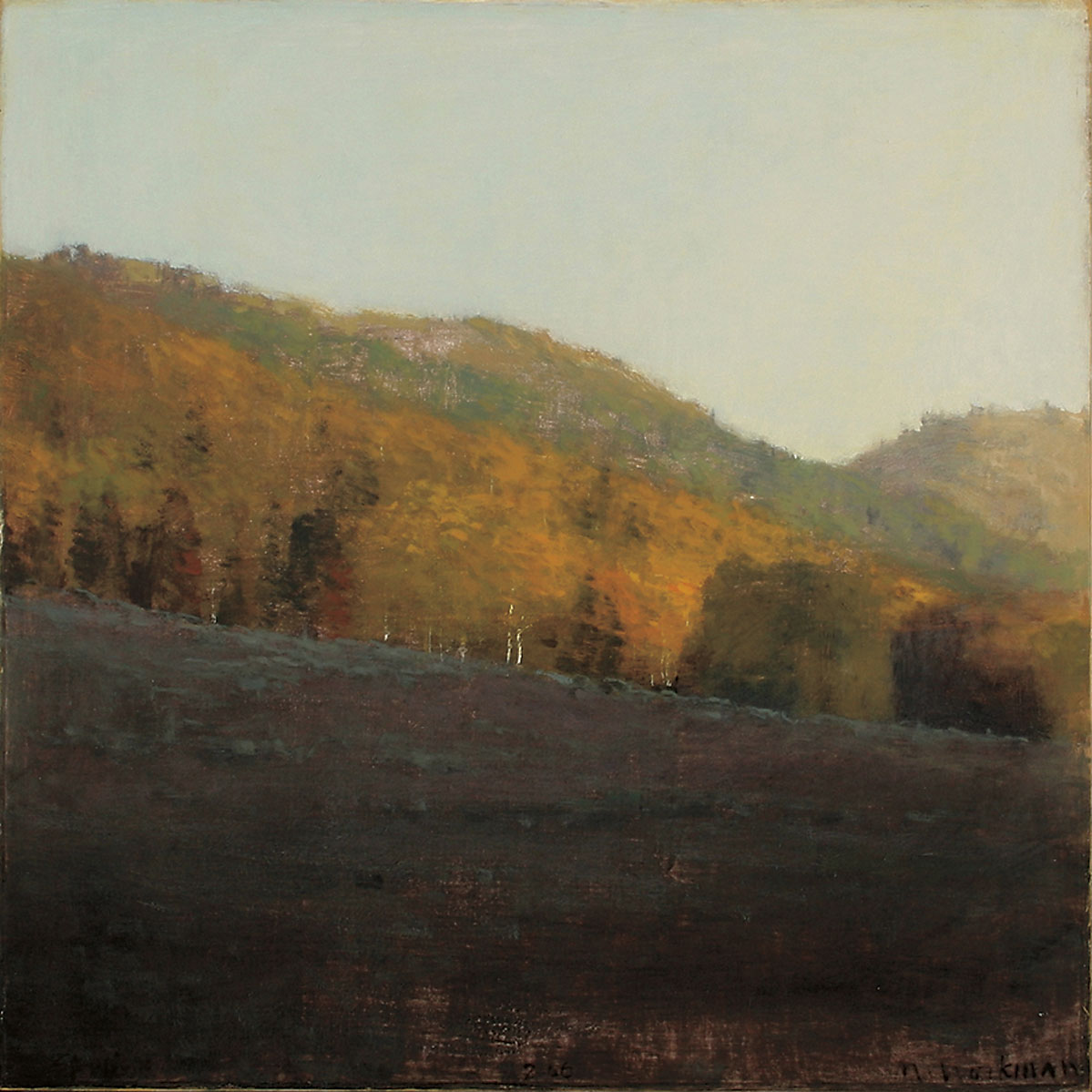