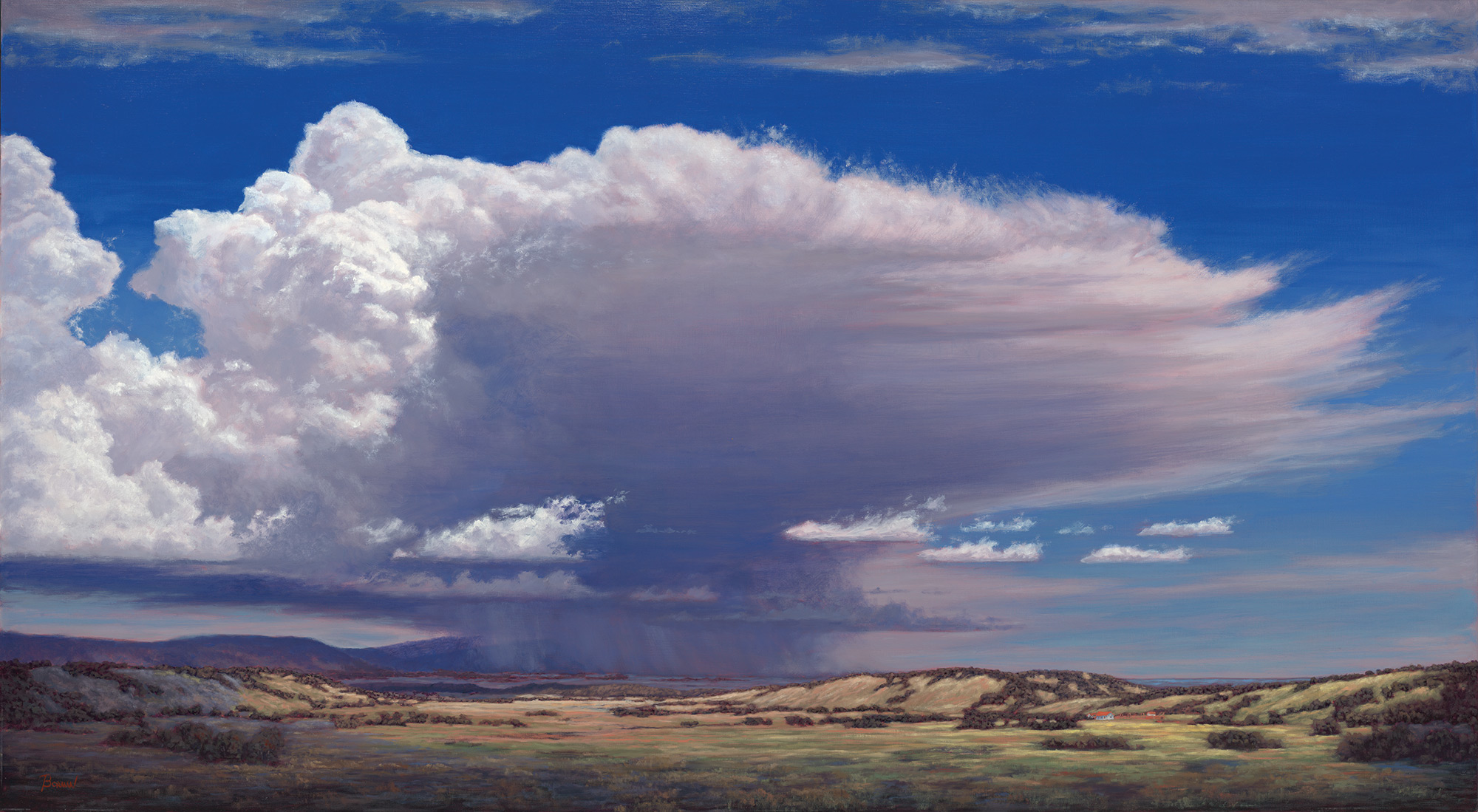 IF YOU HAVE THE CHANCE TO MEET painter Phil Bob Borman in person, he will likely greet you with an enthusiastic, “Howdy!” A native of the Lone Star State who makes his home in the Texas Hill Country, Borman is a lifelong fan of Will Rogers and considers himself a humorist. “I’m so stinkin’ Texan, I got two first names, we got an oil well on our place, and I got a cousin in prison named Bubba!” he jokes, as if to prove the point.

The cowboy artist collected his first piece of art when he was 7 years old, but he’s been drawing since he was “itty bitty.”

In high school Borman was walking through a shopping mall in the Dallas area when he came across a landscape painting of cowboys with a big storm cloud billowing behind them. “I remember being taken by that cloud,” Borman says. He bought the print, and it became a muse for the signature skyscapes he now paints. “I wasn’t thinking, ‘Wow, I’m gonna do skies,’ but that was what I was drawn to,” explains Borman. “I still have that print, and it just kinda goes to show that when the Lord gives you a direction, it may meander like a river, but it’s still a direction.”

The meandering river of Borman’s life didn’t always include painting full time. He spent many years “cowboying” in New Mexico and Texas. He also worked at a foundry in California and was a government trapper. The artist discovered a love of ministry and teaching art along the way, and he continues to pursues those passions today. “I just love watching the lights come on,” Borman proclaims when describing his experience teaching at the Fredericksburg Artists’ School. “That’s one of my passions, sharing what I got.”

As for his own education, Borman studied art at Sul Ross State University at Alpine, where he earned a bachelor’s degree in fine art with a minor in animal science. After graduation, he cultivated his creativity by sculpting contemporary cowboys for 15 years. In 1995, he embarked on a 10-year break from art to take up ministry full time. “It was one of them deals where art meant too much to me,” he explains of his sabbatical. In 2006, “the Lord said, ‘Start painting,’ and all of a sudden I just started painting,” Borman says. Remarkably, painting wasn’t something he had done much of since taking art classes in college.

Today, Borman’s artwork is fixated completely on colorful cloud scenes and spectacular skyscapes. “He’s captured so many different skies — it’s amazing what he notices,” says Lee Small, an interior designer and art representative in the Dallas-Fort Worth area. She has known Borman for several years and says his sky paintings are popular with her clients.

“What I hear more than anything is that staring into that sky evokes a feeling for them,” she says. “You can daydream looking at his work — everybody can do that. And his colors! When you get his paintings under really good lighting, they just glow.”

According to Small, Borman’s numerous commissioned works have often served as “devotionals” to a family member or of a favorite location. “I have sold paintings to second-generation collectors whose parents had Phil Bob’s works in their homes, and they wanted to continue that tradition,” she says. “His work crosses all genre of art collection, because his subject is something that universally is seen every day.”

Small also appreciates Borman’s commitment to learning and honing his craft. She’s watched his glazing and color technique evolve to achieve a timeless quality. “He’s perpetually studying,” she says. “When he comes to Fort Worth, he’ll go to the Amon Carter Museum and just stare at the old masters.”

“My pursuit — and I ain’t there yet — is excellence. I wanna be the best possible artist that I can be,” says Borman. “This is not comparatively speaking, except with me. Every day as I paint, I’m actively pursuing. Every day I work hard at trying to push past what I know.”

Borman practices what he preaches in regards to this quest. “I tell my students that it doesn’t matter where your skill level is. If your pursuit is excellence, then you’re collectable. Your paintings are not about who you are, it’s when you are. Collectors like to be part of the process; they want to say, ‘Yes, I see the process.’ If I’m no different now than I was last year or 10 years ago, then I stepped off somewhere.”

But Borman is right on track, according to Tim Taylor, who owns Whistle Pik Galleries in Fredericksburg, Texas, and has known the artist for 20 years. “Yes, he paints the same stuff over and over again, but has anybody ever seen the same cloud twice? Every painting gets better than the one before,” says Taylor. “People come and stand in front of his paintings, and they don’t just stand and ponder them for a few moments, they stand with them almost expecting the clouds to move.”

Taylor says his customers are not only taken with Borman’s work, but also with the man himself. “Most of the time when Phil Bob is in the gallery, if he gets to visit with somebody, we find a new collector because his personality is not quite as big as his landscapes, but almost!” 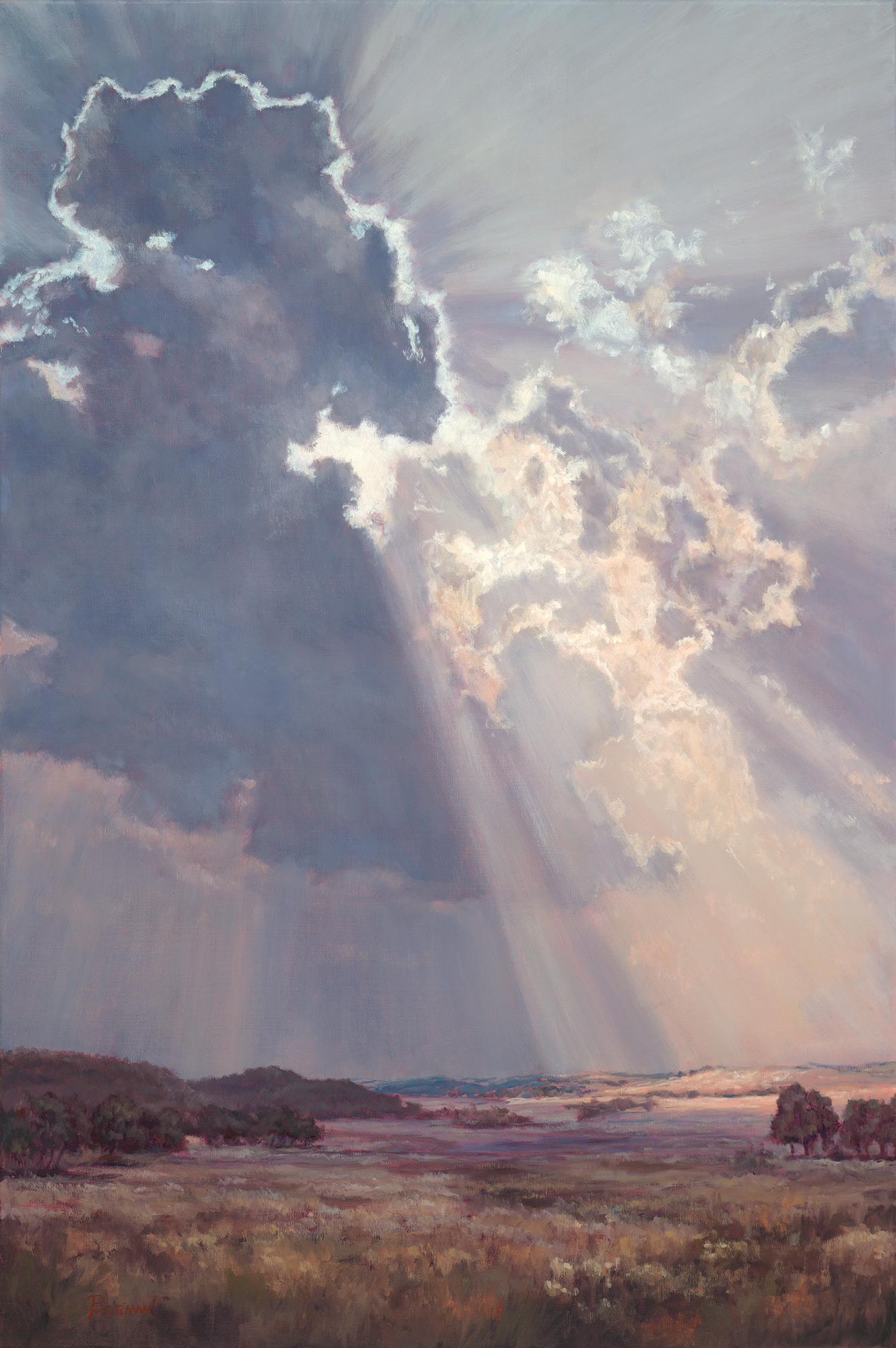 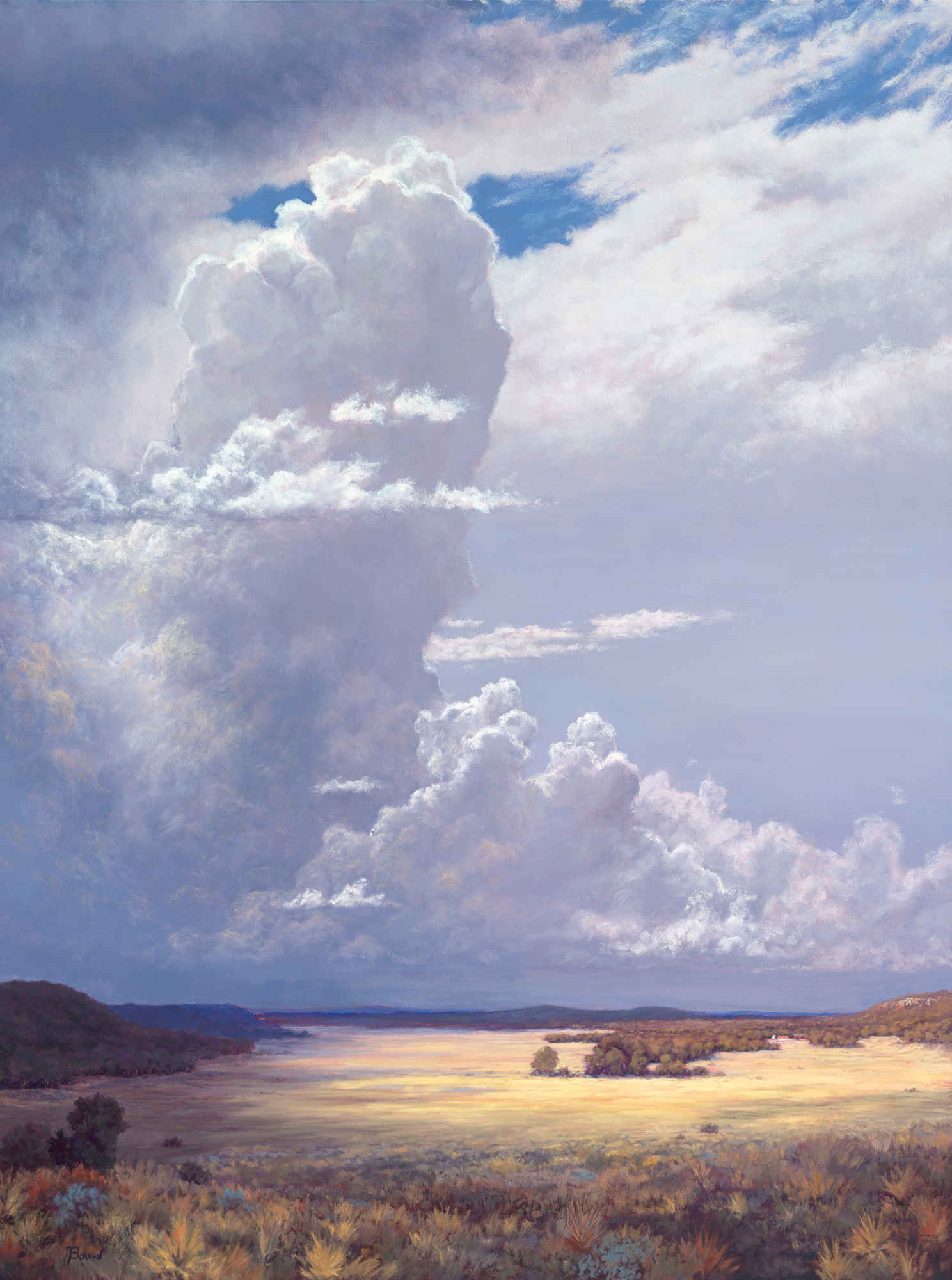