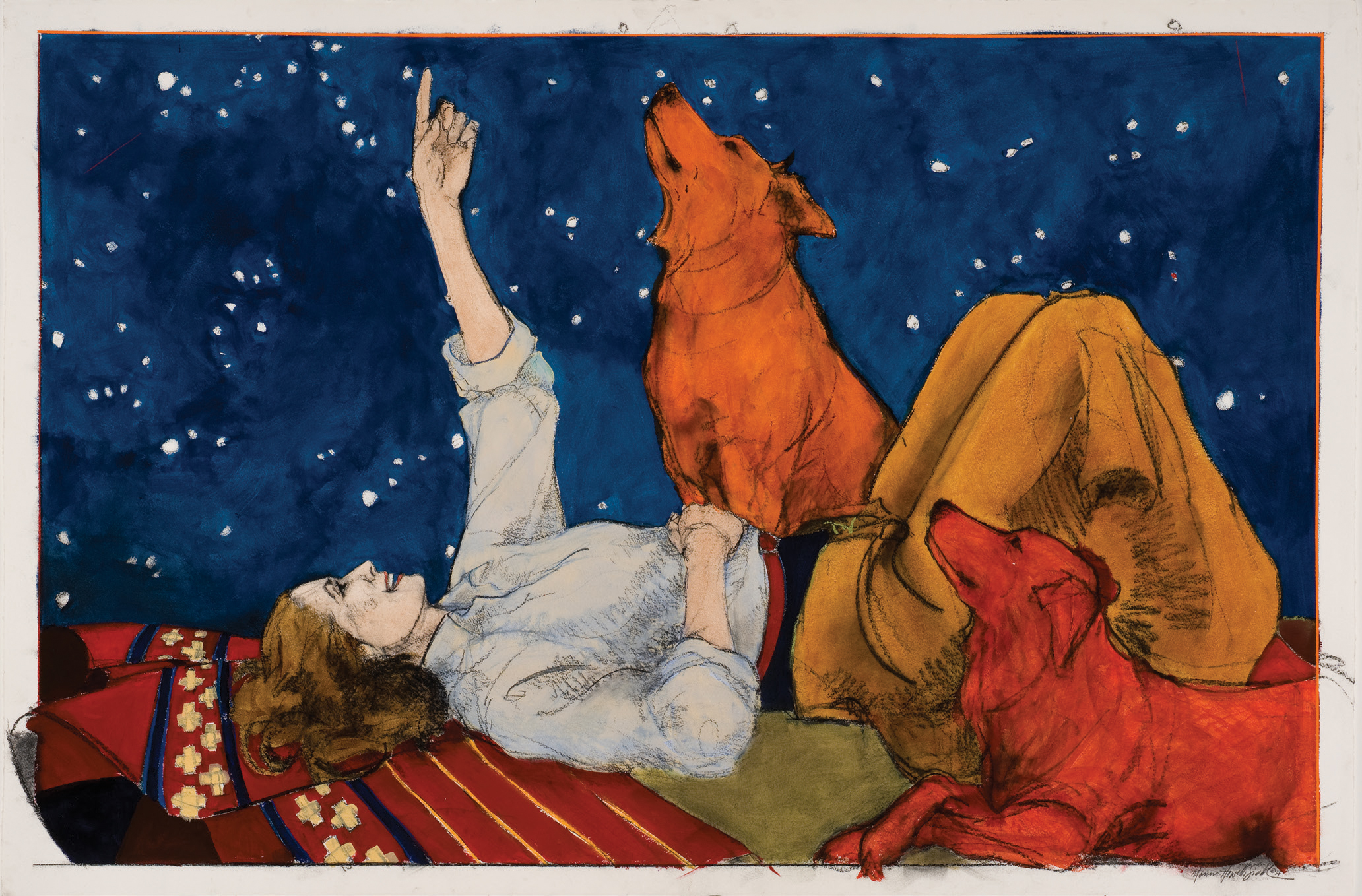 When the Booth Western Art Museum in Cartersville, Georgia, was building their permanent collection in preparation for its 2003 opening, they were looking to incorporate more contemporary artists to round out the founder’s holdings. They wanted work that could add another dimension to the American story they desired to tell through the lens of art. During their search, painter Donna Howell-Sickles landed high on their list.

“We had Fritz Scholder, Ed Mell, and a few other more contemporary artists, and we wanted to diversify the collection further in that direction,” says Seth Hopkins, director of the Booth Museum. “Donna was one we selected early on.”

In 2001, they purchased Howell-Sickles’ 60- by 40-inch painting Not Without Its Ups and Downs from Big Horn Galleries in Cody, Wyoming. The colorful artwork depicts a cowgirl launching into the air as she’s tossed from a bull. And although the woman is most likely in peril, she looks as though she’s having the time of her life, with hands in the air and a wide smile on her face.

“Years later, I jokingly said to Donna, ‘She looks pretty happy even though she’s about to be thrown to her death,’” Hopkins recalls. “And she replied, ‘She’s not dying, she’s just dealing with life’s ups and downs.’” 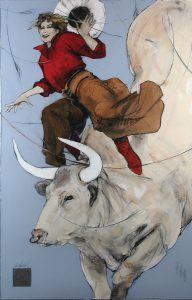 This serves as an excellent illustration of the motivation behind Howell-Sickles’ work over her successful 30-plus-year career as an artist known for her colorful and lively cowgirl portraits. “When I started all of this forever ago, there were not many depictions of women in Western art that were anything like the women I grew up around,” she says. “There was no artwork that let them be actively engaged in their now. This is to honor them, I suppose; their strength, humor, laughter, and joy needs to be shown.”

Howell-Sickles grew up in the small, agricultural community of Sivells Bend, Texas, where art was about the last thing on anyone’s agenda. “The thought of being an artist never crossed my mind,” she says. “I don’t even remember anyone’s home that had artwork in it.” 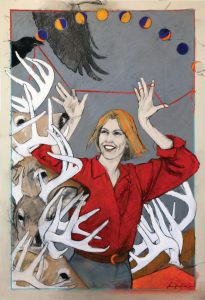 It wasn’t until college in Lubbock, Texas, where she majored in education, that Howell-Sickles had an inspirational epiphany of sorts. “My junior year, I took art electives and it was like suddenly I was doing something that felt like it mattered,” she recalls. “During a drawing class, I realized this is something I could see myself doing for my whole life.” She switched her major to fine arts but was hesitant to tell her parents, convinced that they wouldn’t understand.

By that time, Howell-Sickles had already discovered the cowgirl muse that would shape her later work. She had collected old postcards with this imagery, and after attempting a few cowgirl-themed paintings, her college professors claimed that they were pretty sure she wouldn’t make a living as a Western artist, especially if she was focusing on women. “So I ignored all that like I do most things,” Howell-Sickles says.

Today, looking back on the valuable contributions that Howell-Sickles has made to the world of Western art, thankfully, she didn’t take those words to heart. Instead, she worked hard and paved her own way, just like the joyful, strong women she depicts. 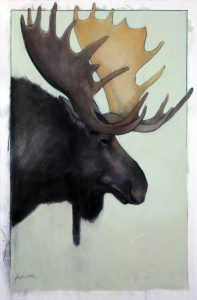 Chris McLarry, owner of McLarry Fine Art in Santa Fe, New Mexico, was first introduced to Howell-Sickles’ paintings in 1990 when he was working for a different gallery. When he opened his own, he knew he wanted to represent her. “As an art dealer, I’m always trying to find an artist who has their own voice,” he says. “There’s no one that does what Donna does; you can see her work from across the room, and you know it’s Donna’s.”

By the time the Booth Museum acquired her piece for their permanent collection, Howell-Sickles’ career was in full swing. “She was one of the leading people in the contemporary Western art movement,” Hopkins says. “And a lot of people who collect her work say they love the joy that it brings them. The women are smiling and look like they’re having a good time.” 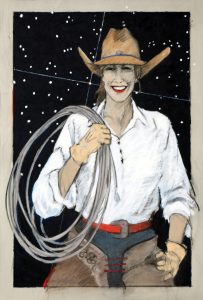 But Hopkins says the appeal doesn’t stop there. “There’s depth to the work as well,” he adds. “It’s not just a pretty picture or a pretty girl. If you want to enjoy it on that level, that’s fine, but if you read her book and have studied art history, you’ll see symbology and more complex classical influences, even though it’s contemporary.”

McLarry also notes that it’s Howell-Sickles’ raw skill that helps each piece achieve excellence. “Few artists delve into the drawing aspect of the work, and she gets down to the skeleton,” he says. “She has a drawing technique that I think is the base of any good artwork, especially figurative.”

And McLarry also describes the joy that her work emits. “People have said, ‘Every time I pass it in the morning, it makes me smile,’” he says. “It’s very uplifting and very positive in a world that needs joy. It’s the colorfulness, the expressions on their faces, what they’re doing in life. They’re living a good life, living their dreams, and fulfilling who they are as people. It’s like you want to be one of the characters in the painting.” 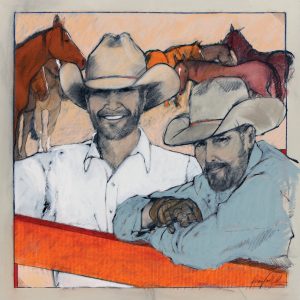 Throughout her career, Howell-Sickles has experienced more success than she’d ever imagined, making it evident that there is indeed a need in the Western art world for work that portrays the strengths of the female figure. She served as president of the non-profit organization American Women Artists from 2000 to 2003 and was inducted into the Cowgirl Hall of Fame in Fort Worth, Texas, in 2007. Along with the Booth Museum, her work is in the collections of the Tucson Museum of Fine Art and Western Spirit: Scottsdale’s Museum of the West, both in Arizona; the National Museum of Wildlife Art in Jackson Hole, Wyoming; the Buffalo Bill Center of the West in Cody, Wyoming; and the C.M. Russell Museum in Great Falls, Montana. Along with McLarry Fine Art, she’s represented by Ann Korologos Gallery in Basalt, Colorado; Broadmoor Galleries in Colorado Springs; and Big Horn Galleries in Tubac, Arizona, and Cody, Wyoming. 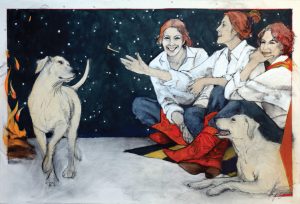 Recently, Howell-Sickles has found herself moving in a different direction, focusing more on animals and other Western characters. “I’m using more elements and varying imagery,” she says. “The cowgirl was my sole focus for so long, partially because that iconographic imagery was new and spoke so strongly due to the bold colors and my stylistic approach. … Now, I’m exploring some other avenues of the Western canvas. I’ve always included the animals of the West in my work, but now I am showcasing those with no figures involved. … The directness of an animal is a completely different goal than the complicated stories I weave around the cowgirls.” 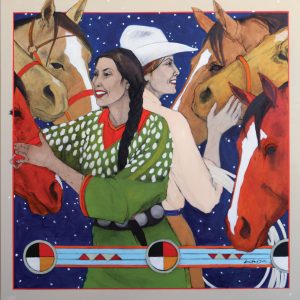 However, she hasn’t abandoned figurative work completely. “Recently, I’ve started a few pieces featuring Native American women,” she adds. “I feel a bit awkward telling stories that are not mine, but there’s so much joy there to be shared and so many untold adventures.” Along with that, she’s been working on charcoal drawings focused on cowboys instead of her cowgirl muses, which she says has miffed her audience to a degree.

But Howell-Sickles still feels strongly about the role of women in the arts, both those depicted and those pursuing creativity as a career. “We still need stories about strength, choice, and confidence,” she says. “Art by and about women continues to be below 10 percent of the representation at the top events. Thankfully that has begun to creep upward lately, but coverage and pricing are still far behind where it should land.” 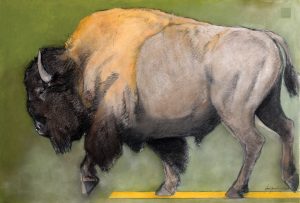 Today, she can most likely be found in her studio in the historic downtown building that she and her husband bought and renovated in the small town of Saint Jo, Texas, just upstairs from Davis & Blevins Gallery, which the couple founded in 2010.

“Last summer, I was sitting on the porch of her gallery, and she was doing a live sketch for about 10 or so people,” Hopkins recalls. “The ease with which she was making marks and talking, creating a loose sketch as entertainment, it just shows that she has this innate talent to do that.”

Wherever her art leads her, Howell-Sickles makes it clear that she still has much to say. “I’ve found all kinds of stories I could tell through this medium,” she says. “It’s all been great fun.”