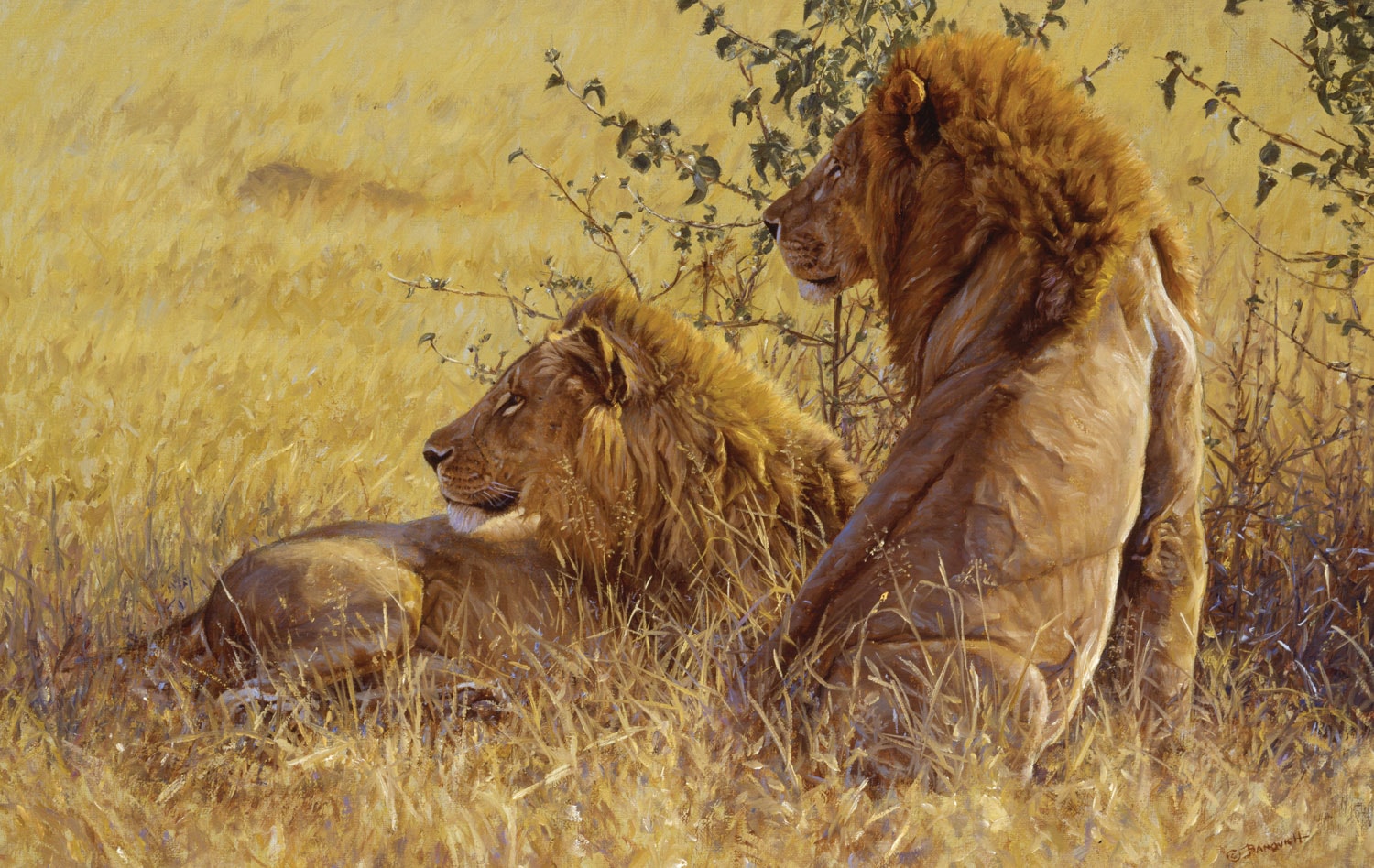 JOHN BANOVICH’S CONSERVATIONIST IDEALS, as fierce as the lions he portrays, roar with authenticity. His large paintings express a poignant love for places losing their hold on wilderness, and in turn, they bring to light the delicate balance of the natural world in danger of extinction. Because of this ideology, the Banovich Wildscapes Foundation funds endeavors in Africa to protect endangered areas. 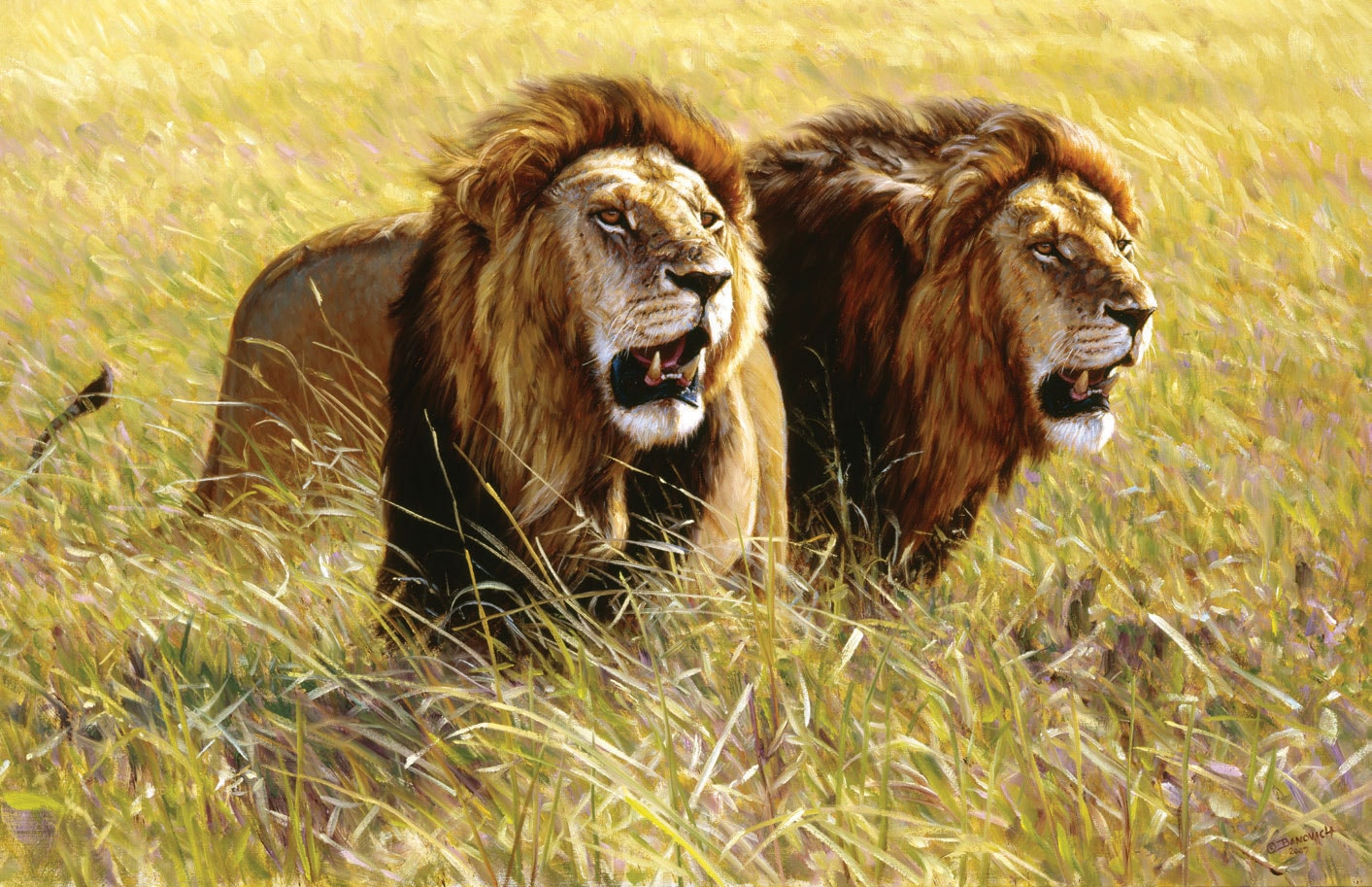 In November, the Nevada Museum of Art in Reno hosts an exhibition, King of the Beasts, that brings to light not only the plight of the lion but also provides a historical perspective of its depictions. Borrowing from corporate and private collections, the exhibit showcases around 40 of Banovich’s paintings as well as historic artworks dating to 1629, starting with Rembrandt’s The Small Lion Hunt etching and ongoing through Wilhelm Kuhnert’s turn-of-the-20th-century wildlife paintings. Throughout time and civilizations, lions have represented everything from religious figures to royalty, appearing on heraldry banners, corporate logos, and mystical tapestries. No other image denotes as much strength, courage, and valor as the maned lion amidst his pride.

“It’s a great way to share the past, present, and future of the lion, showing how each millennium changed the image of the lion based on what we knew,” Banovich says, noting that people had “a lot more anthropomorphic tendencies than we have now, and we get to celebrate their love of lions as well.” 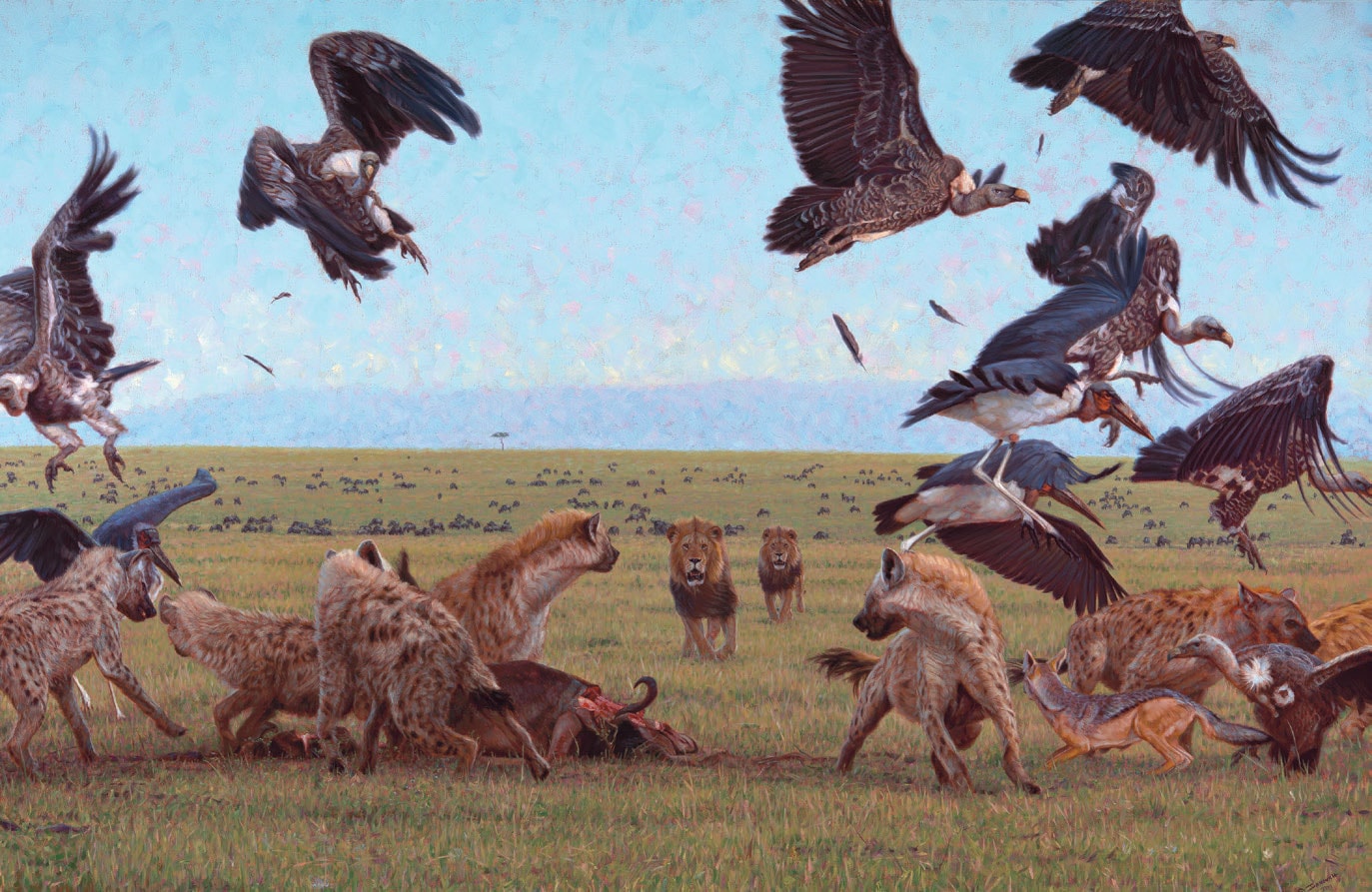 David B. Walker, CEO of the Nevada Museum of Art, thinks that a museum has the responsibility to have a point of view and to position itself as a museum of ideas, not merely one of objects hanging on white walls. “We’re interested in the kind of conversations our exhibits create,” Walker says. “Banovich creates these narratives that are compelling, but he’s more than an artist, he’s an activist and a conservationist.” Walker equates the condition of the African lion to the American bald eagle. “It wasn’t until there was a greater awareness of the bald eagle that people did something about it, and now, we can see its comeback,” he says.

The centerpiece of the exhibition is Banovich’s 8-by-8-foot painting entitled Enthronement of a King, depicting the life cycle of a lion from birth to death. Through years of observation and intense study, Banovich portrays the lion using an impressionistic expression of the environment without losing his realistic edge. 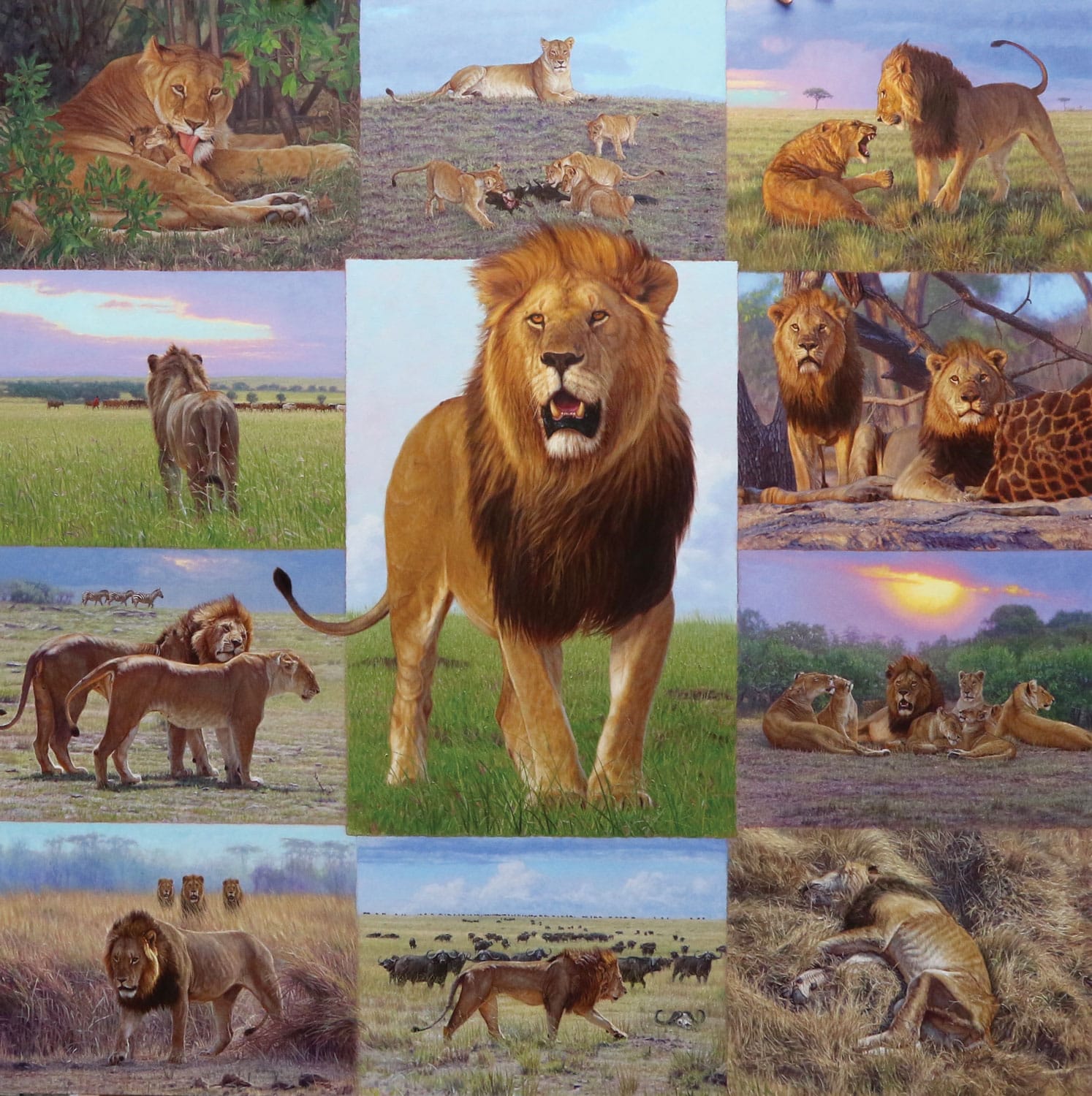 “It’s a very complicated story told using 12 visual blocks,” Banovich says. “This painting explains the making of a king, starting with the moment the lion is born and all the milestones. It starts with the moment when he takes his first breath, still wet from birth.”

Enthronement of a King depicts the lion’s story from left to right, showing playful youth and unknown obstacles during adolescence. The large center canvas shows the king of beasts in all his fierceness and dignity. And in the final panel, the aging lion takes his last breath. “It’s a moment that could be viewed as sad, but in reality, it’s happy, because he beat all the odds,” Banovich explains. “He wasn’t killed by a buffalo, by another male, by a hyena when he was a cub or bitten by a snake, and he didn’t get speared or poisoned by Massai. He beat all the odds to die of old age with his genes propagated. He’s left his mark and returned to the earth.” 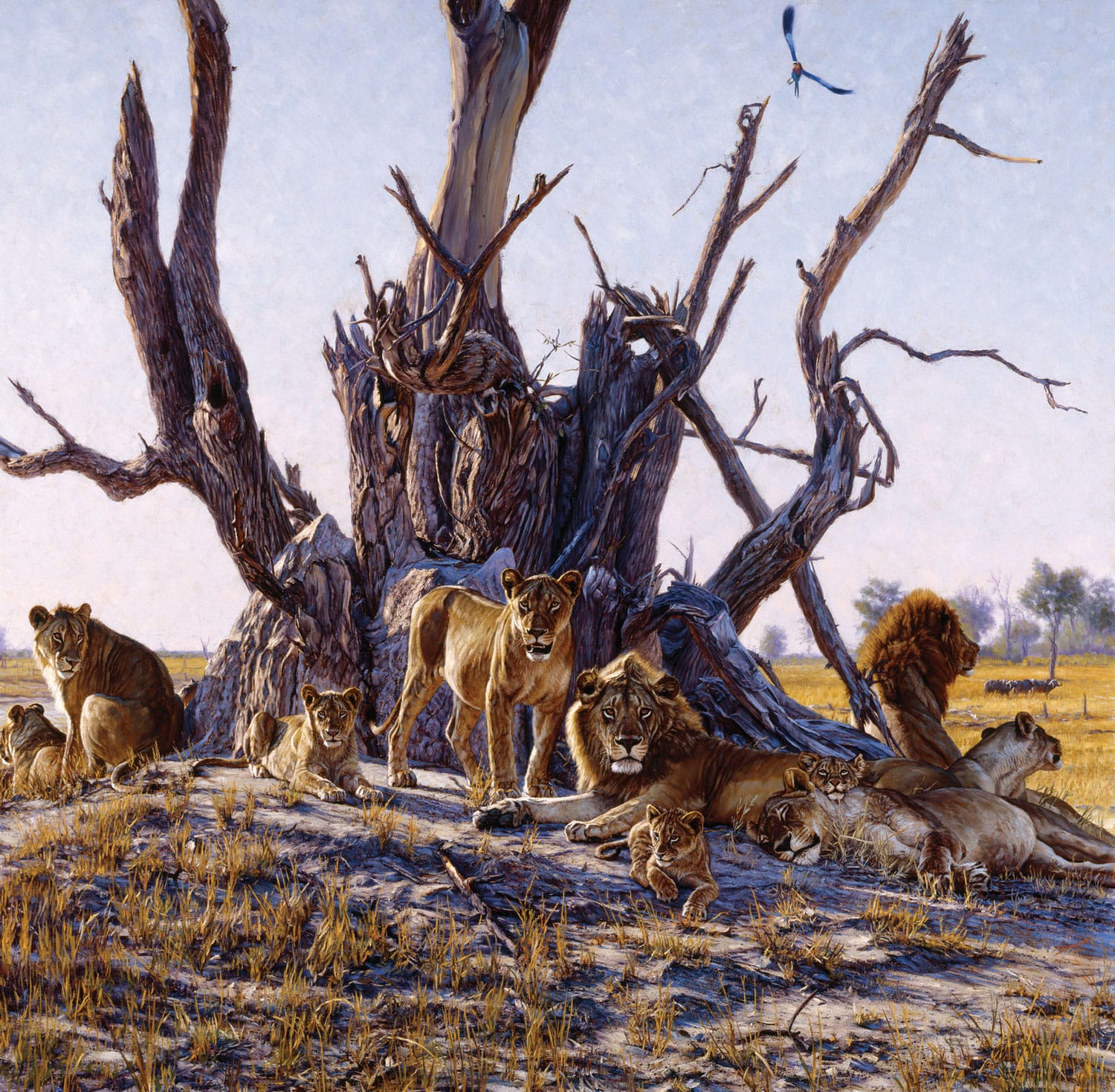 In addition to showcasing Banovich’s artwork, the exhibit includes a three-dimensional display of all of the ways lions are disappearing from the planet. Items include a snare taken off a lion in Zimbabwe, visceral photos of lions found dead in the wild, a gin trap removed from a lion in Mozambique, a rusty AK-47, and a spear that killed five lions which Banovich received from a Maasai warrior. “And we will have a pile of the most toxic weapon in that display: Carbofuran, a pesticide made by an American and banned in the U.S. but still available in developing countries,” Banovich says. “The narrative will point to a bigger conversation and pose the question, how does man coexist with big things with big teeth in a man-dominated landscape?”

Alan Maiss, a wildlife art collector, considers Banovich one of the top contemporary artists focused on African and North American wildlife. “In addition to his work being exceptional, he’s a genuine spokesperson for wildlife conservation,” Maiss says, adding that Banovich is personally involved and very knowledgeable about conservation. 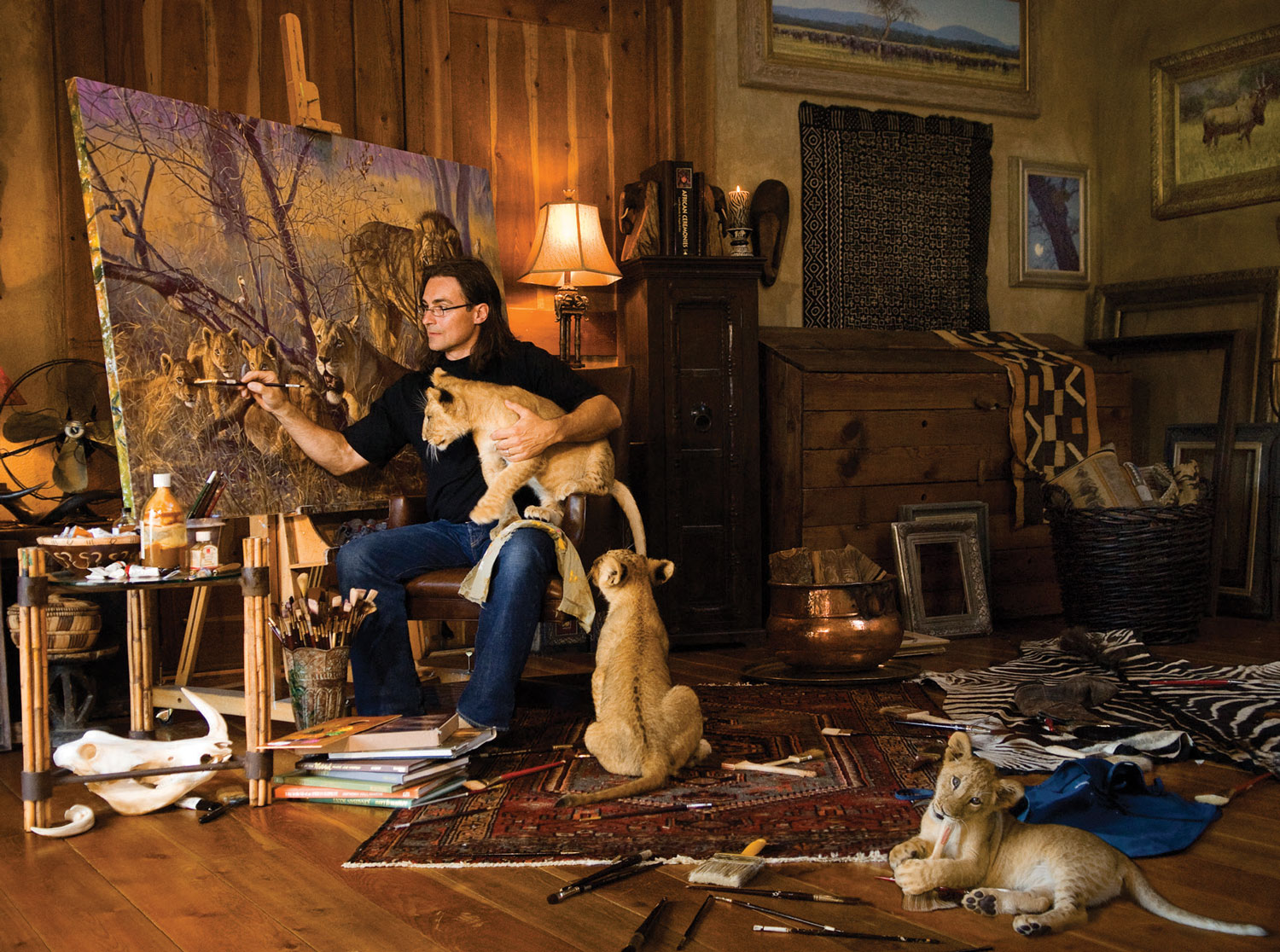 John Banovich’s love of wildlife extends beyond the canvas.

“John’s depictions of wildlife show his great understanding of the animals he paints, as well as the environment they live in,” Maiss says. “His work conveys more than just an animal standing in the foreground.”

The exhibition, King of the Beasts, opens November 9 and runs through February 20, 2020, at the Nevada Museum of Art.