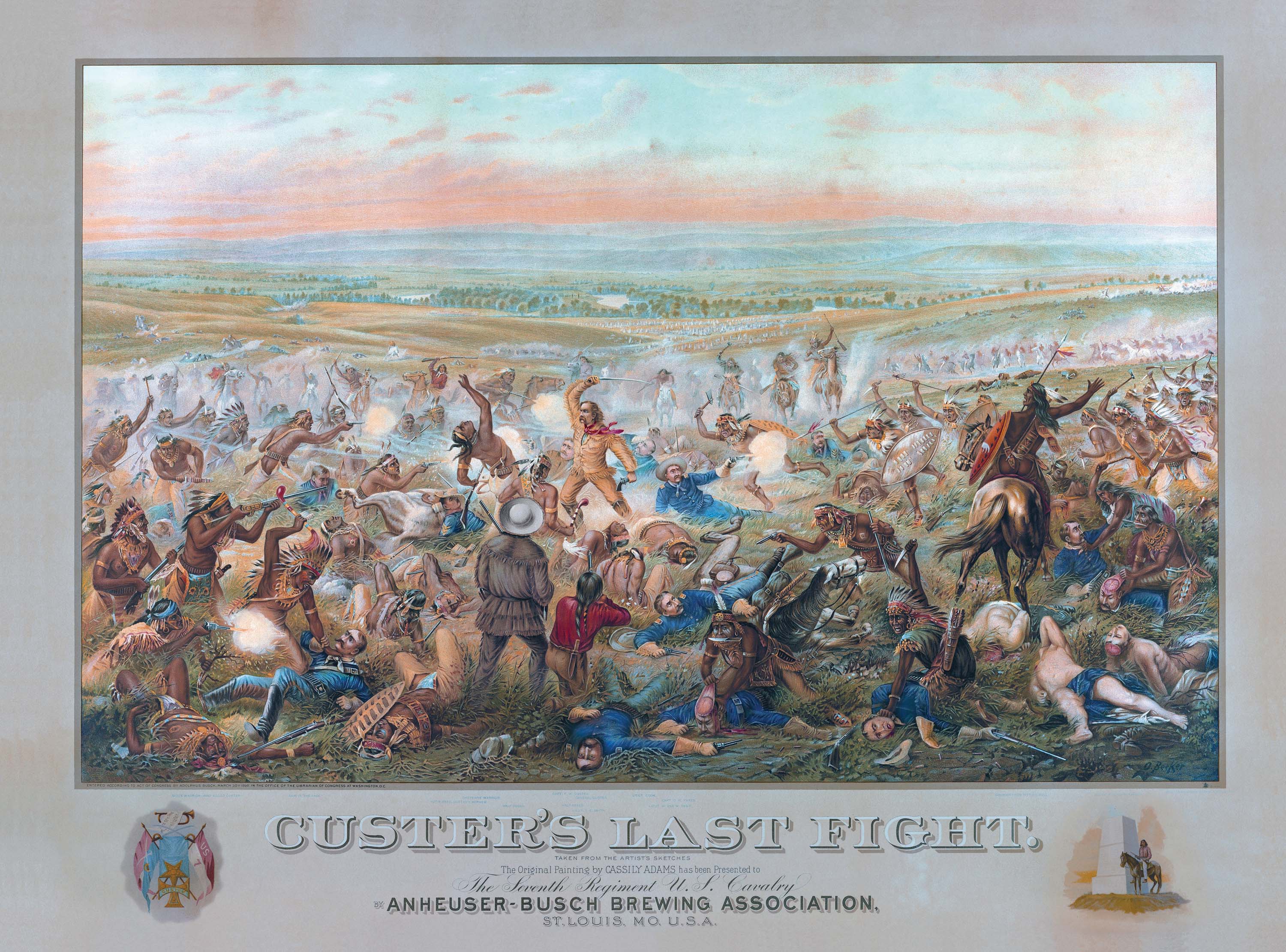 DURING THE SUMMER OF 1972, I was embarked upon a four-year search for the Great American Bar, a trip that took my VW Bug 30,000 miles across this nation’s roughest roads and myself into its oldest, most colorful dives. That quest resulted in a book, Saloon, published to cork-popping effervescence in 1976. One afternoon I visited the Idaho Hotel bar, in the ghost town of Silver City, Idaho, an emporium reached after a two-hour drive up 25 miles of mountain road that was a spike strip of stone and shale, and that deposited me before the 1863 structure, parched and crabby. I entered the hotel and in its once-elegant saloon found 10 customers (the town’s population) arguing neither politics nor baseball, but whether the 7th Cavalry’s uniforms were accurately depicted in the lithograph that hung before them.

It was Otto Becker’s Custer’s Last Fight, an 1896 print distributed by Anheuser-Busch to scores of bars across America, seen repeatedly by me in my travels, and touted by mid-20th-century as the piece of art viewed by more Americans than any other. “If not the best liked of all American pictures,” noted Professor Robert Taft, who published his “Pictorial History of the American West” in the Kansas Historical Quarterly in 1946, “it doubtless has been the most extensively examined and discussed of any.”

Inspired by an 1884 painting of the Battle of the Little Bighorn, Custer’s Last Fight, by Cassilly Adams, the lithograph was splendid in its violence, dubious in its historical accuracy, and in its portrayal of a golden-haired George Armstrong Custer, romantic to a fault. Yet as my experience affirmed, its presence in saloons across the United States caused a ceaseless spate of chatter. It had been created before television, yet provided comparable entertainment as promotion for Anheuser-Busch beers. This was the Pleistocene era of subliminal advertising. Art such as Custer’s Last Fight created in the drinker a trancelike reverie easily infiltrated by the sponsor’s product. Patrons stood hypnotized by the lithograph’s gruesome battle scene, glanced at its Anheuser-Busch logo, then ordered a Bud.

Depictions of the 1876 massacre of 7th Cavalry troops, at a time when the flamboyant Civil War hero, Custer, may have been planning to run for president, and Indians were considered not just America’s enemies, but bloodthirsty heathens, already had captivated viewers. No less a critic than Walt Whitman characterized the popular 1881 painting, Custer’s Last Rally, by John Mulvany, thus: “Swarms upon swarms of savage Sioux, in their war bonnets, frantic, driving through the background, through the smoke, like a hurricane of demons … deadly, heroic to the uttermost; nothing in the books like it, nothing in Homer, nothing in Shakespeare … I could look on such a work at brief intervals all my life without tiring.”

He and many Americans would do just that, as Mulvany’s 20-by-11-inch Rally, containing 40-odd figures, toured this country and undoubtedly Europe, as a kind of Wild West Show on canvas. Its impact was huge. William Merritt Chase admired Mulvany’s painting to such a degree that he traveled to Europe to study with his teachers. Frederic Remington saw Custer’s Last Rally and was inspired to sketch his version of the subject. Another artist who undoubtedly saw Mulvany’s work was Cassilly Adams.

He was a Civil War veteran, like Custer, but descended from the John Adams family of Boston. He had been trained in painting, and by the late 1870s was employed in St. Louis as an artist and engraver. Members of that city’s Art Club commissioned him to recreate the battle scene “for exhibition purposes,” Robert Taft wrote, “stimulated no doubt by the success of the Mulvany picture.” Adams’ rendition was large: 9 feet 6 inches by 16 feet 5 inches. It included end panels that portrayed Custer “as a small boy in his father’s shop playing with toy soldiers,” the second showing “Custer dead on the field of battle.” Adams’ son recalled that figures “were posed by Sioux Indians in their war paint and also by cavalrymen in the costumes of the period.”

Adams’ Custer’s Last Fight shows little attempt at historical accuracy, as no army participant had lived to verify it. The painting was finished in 1884, and toured widely. It did not realize a profit, however, and was sold to a St. Louis saloon, where it hung for several years. Anheuser-Busch obtained it in 1888 after the saloon keeper’s death. The following year, Adolphus Busch hired the Milwaukee Lithographing Company to make chromolithographs of the Adams’ painting, then hired Milwaukee artist, Otto Becker, to make a master painting of it. And it is from Becker’s painting that the famous Anheuser-Busch lithographs were created.

We depend upon Professor Taft — a Kansas University chemist as well as a historian — for details of the artist’s life. Becker was German by birth, had studied at Dresden’s Royal Academy of Fine Arts, and so far as an interpretation of Custer’s death went, was independent of mind. His daughter, Blanche Becker, told Taft that her father had painted for the Milwaukee Lithographic and Engraving Company, specializing in Western scenes, “after the manner of Remington.” Becker understood the art of advertising. He must have been struck by Custer’s plight, though, for his interpretation of the battle, “Taken from [Adams’] Sketches,” the original lithograph noted, is more classically framed and far more dramatic than its predecessors. As Taft wrote, “It is indeed a picture that tells a powerful, if melodramatic and horrendous, tale … Troopers are being brained, scalped, stripped; white men, Indians and horses are dying by the dozens; Custer with flowing red tie and long ringlets is about to deal a terrible saber blow to an advancing Indian who in turn is shot by a dying trooper; and hundreds of Indians are pictured or suggested in the background. A careful survey of the lithograph is enough to give a sensitive soul a nightmare for a week.”

Yet the print’s subtler message was cautionary, as Custer’s hubris was an issue. By dividing his regiment and not waiting for reinforcement, he had ensured defeat in a skirmish thought unloseable. “Custer was a fool who rode to his death,” Sitting Bull said. Comments like his inspired endless commentary before Becker’s print — and at times fisticuffs.

In its celebration of war, the print was meant to incite passions, chief among them rage at the killing of a white hero by Sioux, Northern Cheyenne and Arapaho warriors: racial “others.” In two years, America would invade Cuba, then the Philippines and Europe; during WWII armed forces would enter the Pacific theater, decimating Japan. Thousands of Custer’s Last Fight prints had been shipped by the Defense Department to U.S. service folk.

The lithograph’s initial purpose was not jingoistic, it was to sell beer. And that it did. It stands as one of Anheuser-Busch’s most successful ad vehicles. By 1946, the company had produced more than 150,000 copies of the lithograph. A 1933 letter from Becker to his daughter states, “I painted Custer’s Last Fight in 1895. The original painting is still in my possession, but unfortunately I was forced to cut it into pieces so that a number of artists could work on it … making the color plates.” Becker died in Milwaukee in 1945, at age 92. His painting hangs at Anheuser-Busch headquarters, in St. Louis. Cassilly Adams’ canvas, upon which it had been based, was presented to the 7th Cavalry at Fort Riley sometime between 1888 and 1896. It was lost in various moves, restored by the WPA and rehung at Fort Bliss by 1938, then destroyed by fire in 1946.

Copies of the lithograph still exist in taverns (“Keep this picture under fly-netting in the summer time and it will remain bright for many years,” Anheuser-Busch advised), and I recently purchased a 36-inch-by-27-inch print from the Custer Battlefield Museum, the only licensed distributor of the print today. Spread across my desk, it is a vivid reminder of my travels. Its colors are Technicolor bright, and while not so classically rendered as Mulvany’s Custer’s Last Rally, it is more grippingly dramatic in its rendition of Custer, shown in buckskins and holding both saber and a pistol wielded as a club. The horror of the battle is plain, with Indians tearing scalps from troopers’ bloody skulls, and stabbing them where they lie. Mutilation would follow. Taft, who hung a copy near his University of Kansas laboratory, wrote: “The reaction of those who have never seen the picture before is always interesting to observe. Incredulous first glances are always followed by study of all the gory details. ‘Holy H. Smoke! Was it as bad as that?’”

It was the battle that had been horrific, and the lithograph — no gorier than war paintings in museums around the world — makes no claim to high art. The 1890 massacre of Lakota Sioux at Wounded Knee, by a 7th Cavalry troop near Pine Ridge, South Dakota, had been, in part, payback for Little Bighorn, and one Saturday, during 1985’s Crow Fair, I entered a saloon in Hardin, Montana, near the battlefield, that was crowded with Native Americans. To the back bar’s left was Becker’s print, defaced with pen and pencil, and bearing colorful epithets. I wore my blond hair Custer-long, and this was a frightening place. I did not linger, but I did ask the bartender why he kept the painting. “So we don’t forget,” he said. At the American Legion down Center Avenue a friend’s band was playing, and when I entered the packed room I saw we were the lone Anglos. What the hell, I thought, and invited a girl to dance. Thereafter I was asked by native women to jitterbug at least 50 times, and no one disapproved.

Custer’s Last Fight was not on display.