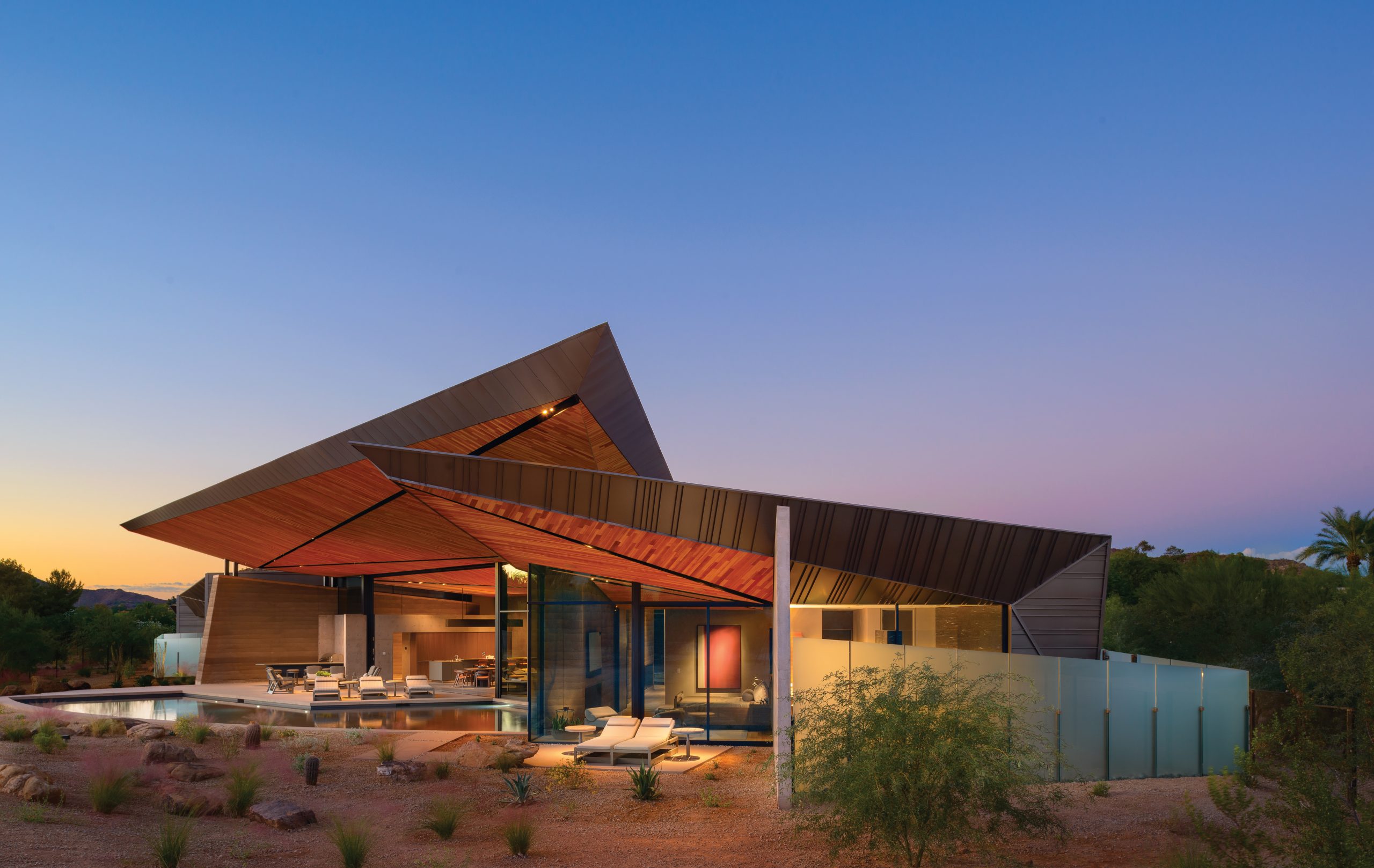 Dancing Light is an arresting sculptural home at the base of Camelback Mountain in Arizona’s Paradise Valley community. Rammed earth, metal, and glass join the desert terrain below, while a floating roof is almost imperceptibly anchored by a glass clerestory above. To the rear, facing the mountain views, the roof extends in two massive angled soffits, exuberant gestures to the rocky landscape and the ever-changing sky. 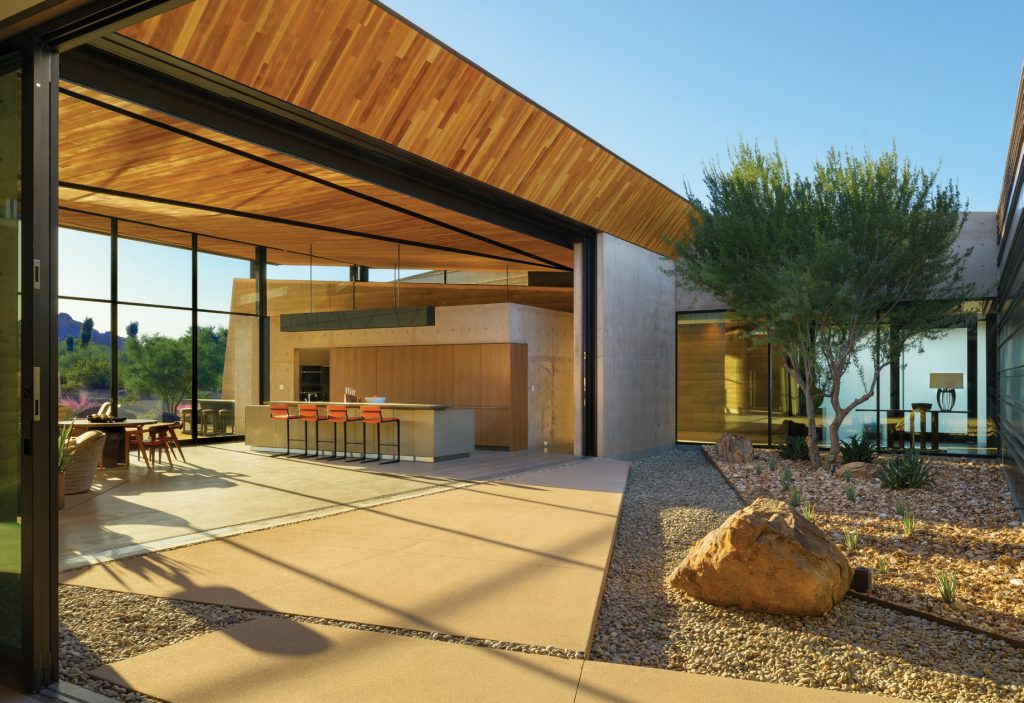 An atrium courtyard provides a source of airflow and passive cooling. 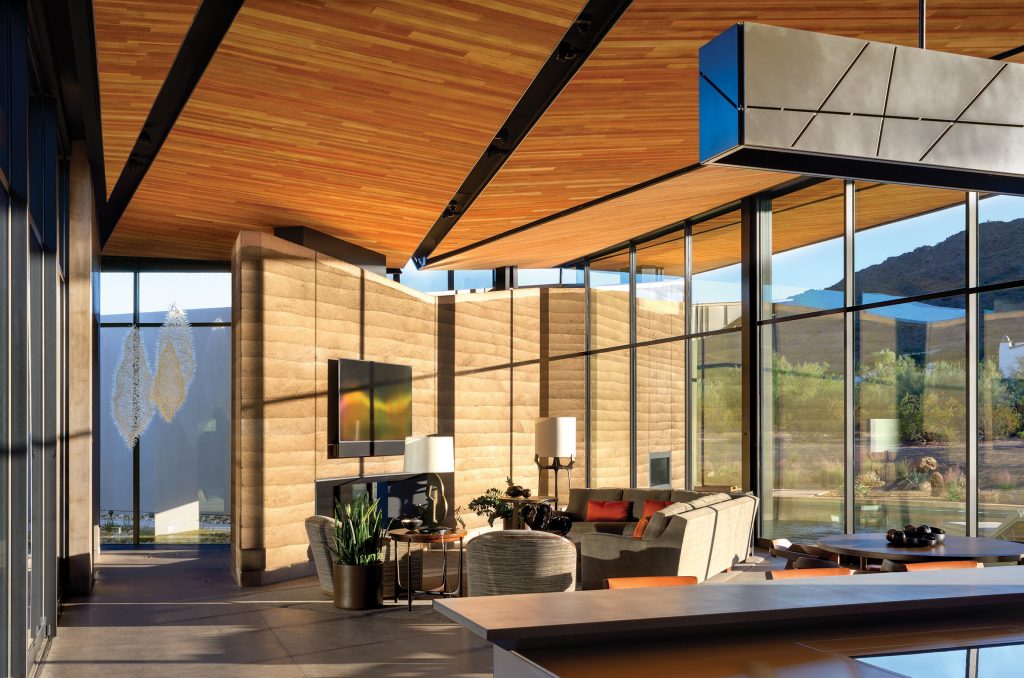 The angled Douglas fir ceiling appears to float above the rammed-earth hearth. The swivel chairs are by Michael Berman Limited.

Before he landed the project that became Dancing Light, architect Brent Kendle, founder of Kendle Design Collaborative in Scottsdale, had no clue as to the identity of the potential client. Two prestigious Scottsdale firms, Desert Star Construction and interior designers David Michael Miller Associates, had worked with the client in the past and were tasked with drawing up a list of potential architects, along with a rudimentary list of requirements.

“I knew they were big stuff,” Kendle says. He went all out, taking video of the 6-acre site which would be divided. One of the sites had an existing house, stables, and trees, and Kendle picked the rugged, empty site that provided uninterrupted views of the mountain as the place for his potential design.

But the interview didn’t go well. And even after Kendle hired a coach to help him prepare, he found himself about to go off the rails again during the second meeting with the client. The contractor gave him a sympathetic warning look, and in desperation, Kendle pulled out a monograph of his past projects and sat down beside the client to discuss them. A dramatic, gestural design using rammed earth, titled Desert Wing, sealed the deal. 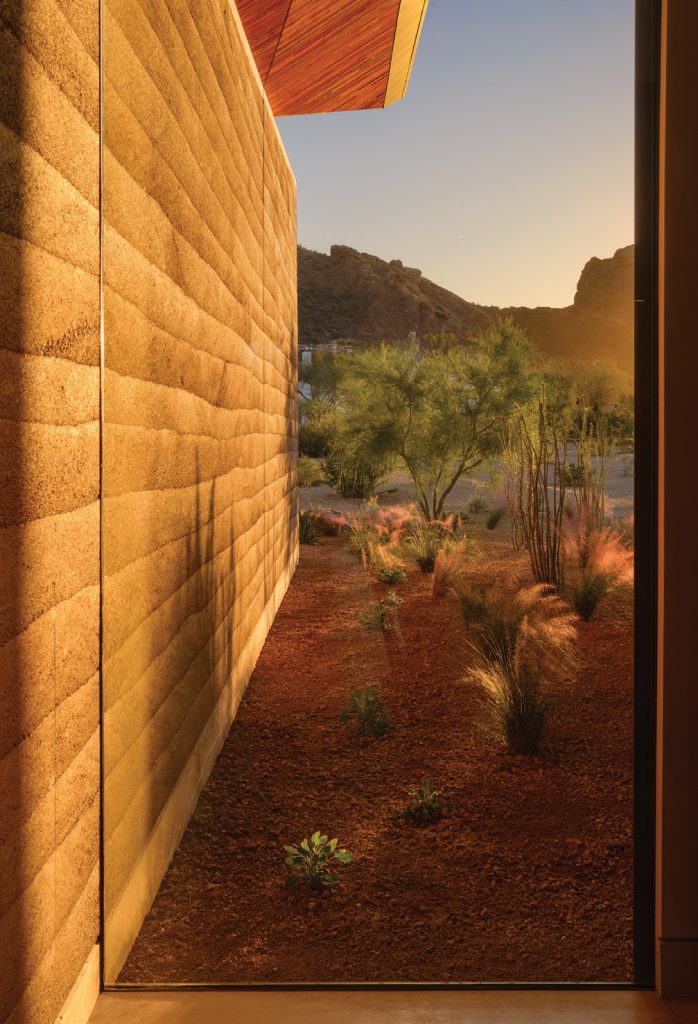 A rammed-earth exterior wall glows in the late-afternoon sunlight; its stratified lines direct the eye toward Camelback Mountain. 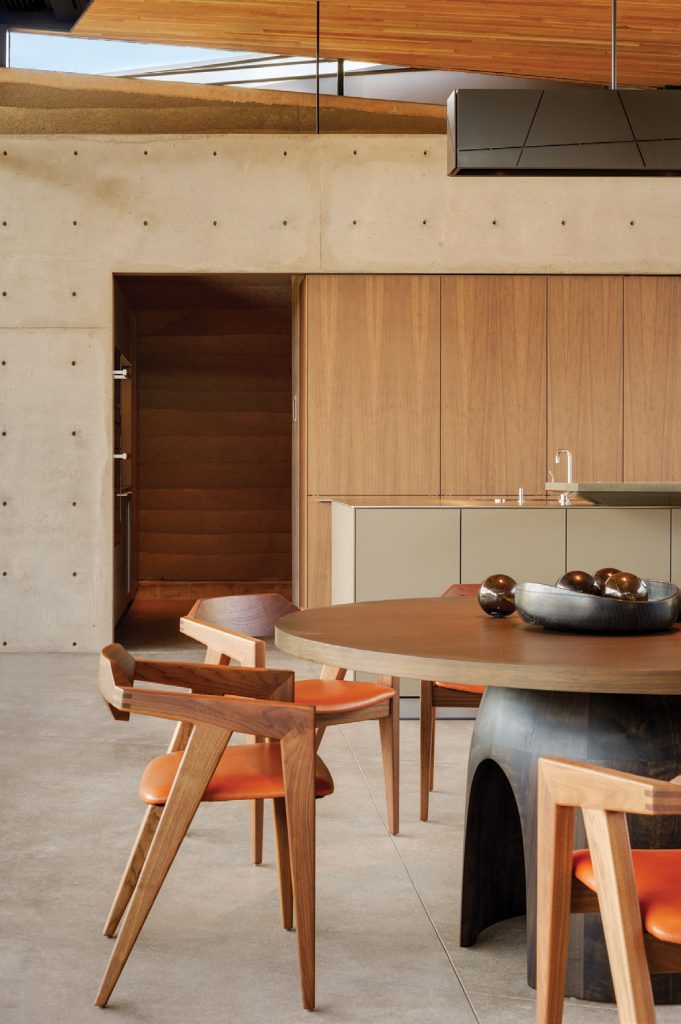 A cast-in-place concrete wall brings intimacy to the kitchen. The cabinets are by Bulthaup. ©Alexander Vertikoff | Vertikoff Archive 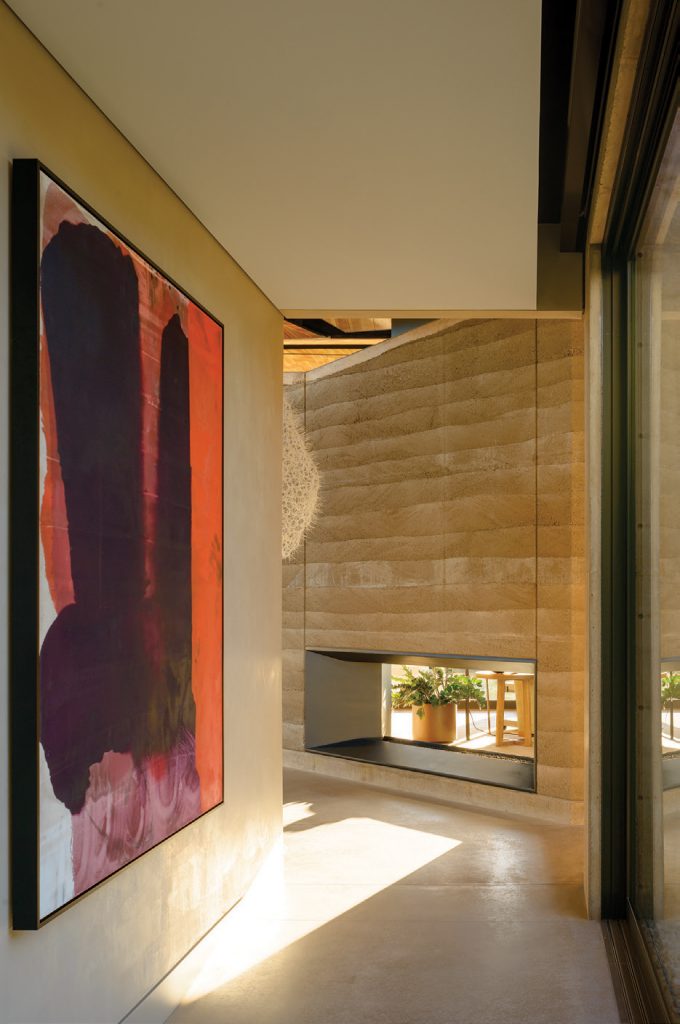 The double-sided fireplace within the rammed-earth hearth greets the owner at the entrance from the garage.

“The client’s aspiration was to have the best, most dramatic house in Phoenix,” says interior designer David Michael Miller. “But he wanted it to be comfortable. I think the client responded to the organic uniqueness of rammed earth as a building material, and Brent’s work is dynamic.”

But this project was like none other the architect had designed before. “I’m used to a super client-involved process, lots and lots of meetings,” Kendle says. “On Dancing Light, I literally met with the client three times; none were longer than 45 minutes; one meeting was only 10 minutes over coffee. He said, ‘Well, I hire professionals and let the professionals do what they do.’ It had the highest budget we’ve ever had.” 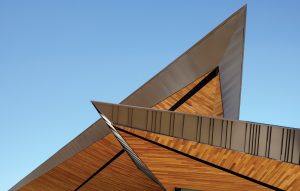 The house’s signature roof soars out in extended soffits that reach for the mountains and sky, creating a dialogue between nature and architecture.

Kendle was given considerable freedom, but there were also high expectations. “We looked at 30 different ways of doing everything,” the architect says. And Miller agrees: “We did six, seven mix-tests to get the rammed-earth color hue correct. The concrete floor wasn’t just a great concrete floor — it was colored. We did test pour after test pour to get colors that were harmonious and fit well together without duplicating one another.”

Kendle designed the resulting home as an extension of its environment. “The strongest thing in the desert is the sun,” he says. “So you either try to shade it out, or you can say, ‘Hey, there’s no greater commodity we have here than the sun, how do we use it in an artistic way, and really tie the architecture to nature in a meaningful way?’” 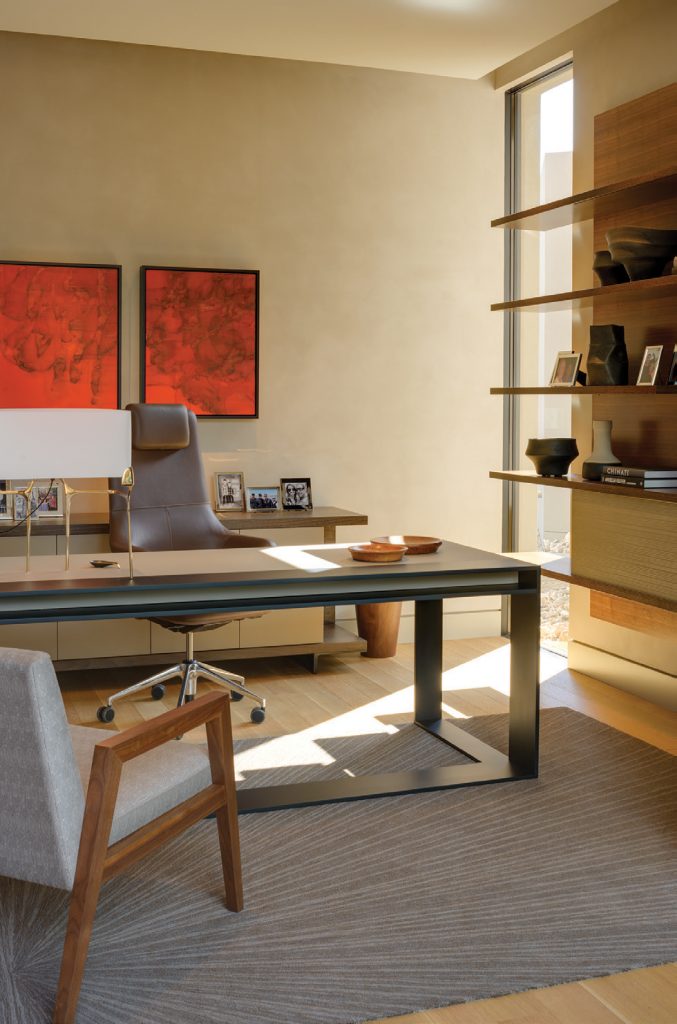 Light and shadow provide a sense of serenity in the office. The desk is by Christian Liaigre. 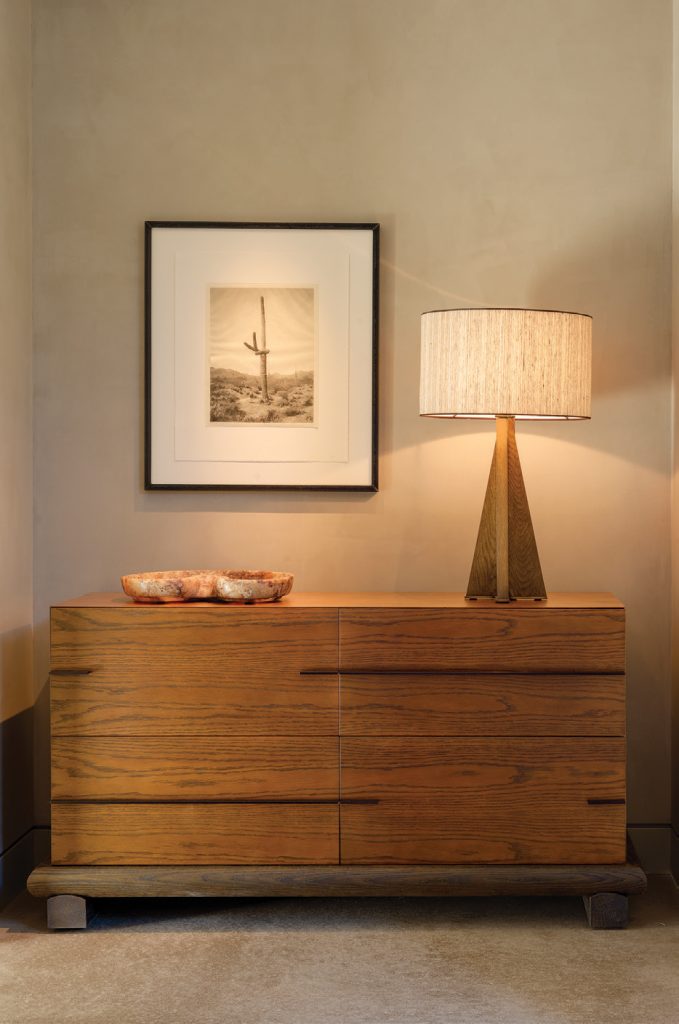 Understated décor contributes to the Zen-like aura of the house. The console at the entry is from Jiun Ho, and the lamp is Alexander Lamont from Jean de Merry. 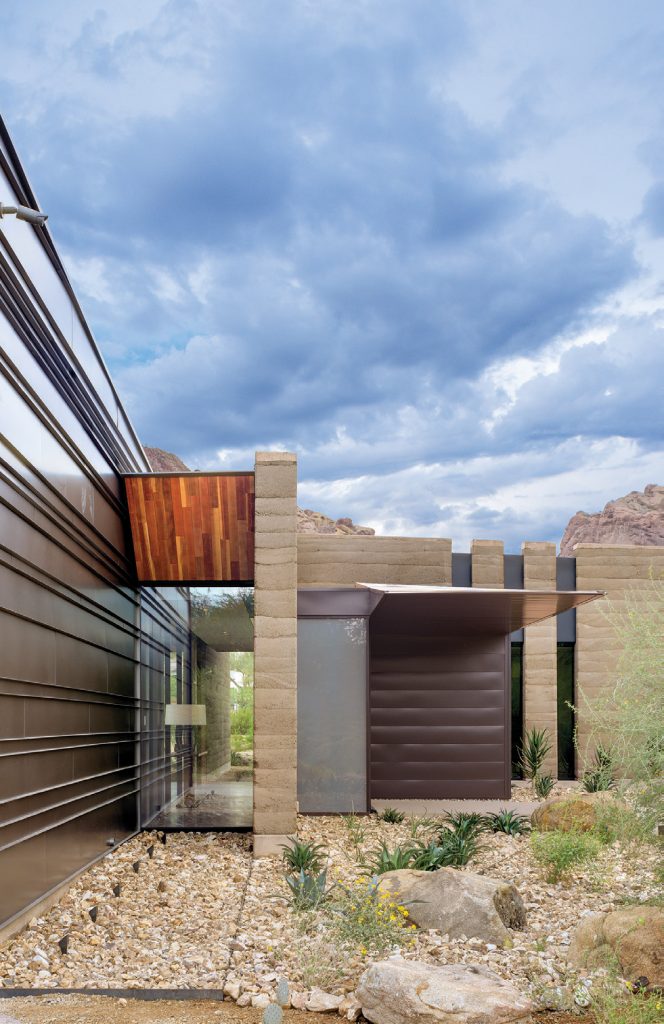 The seamed-metal siding reflects the geological striations of Camelback Mountain, creating a contrast with the rammed-earth walls that frame the doorway. Floor-to-ceiling glass at the end of each hallway provides space for natural light and views.

He viewed the project as an opportunity to design what he considers a true Arizona house, reflecting the area’s ease with indoor-outdoor living and his passion for creating dwellings that seem to rise organically from the earth to embrace their natural surroundings.

“Everyone here has a swimming pool, whether you use it or not. It’s not all that sustainable, but I always try to make it work for you so that not only does it reflect the mountain and reflect light into the house, but it cools the breeze. We call this house Dancing Light because the reflected light shimmers into the rammed-earth walls and the fractured planes of the sand-blasted wood ceilings, creating a kinetic art experience that changes every day, every minute, every season as the sun moves,” the architect explains. 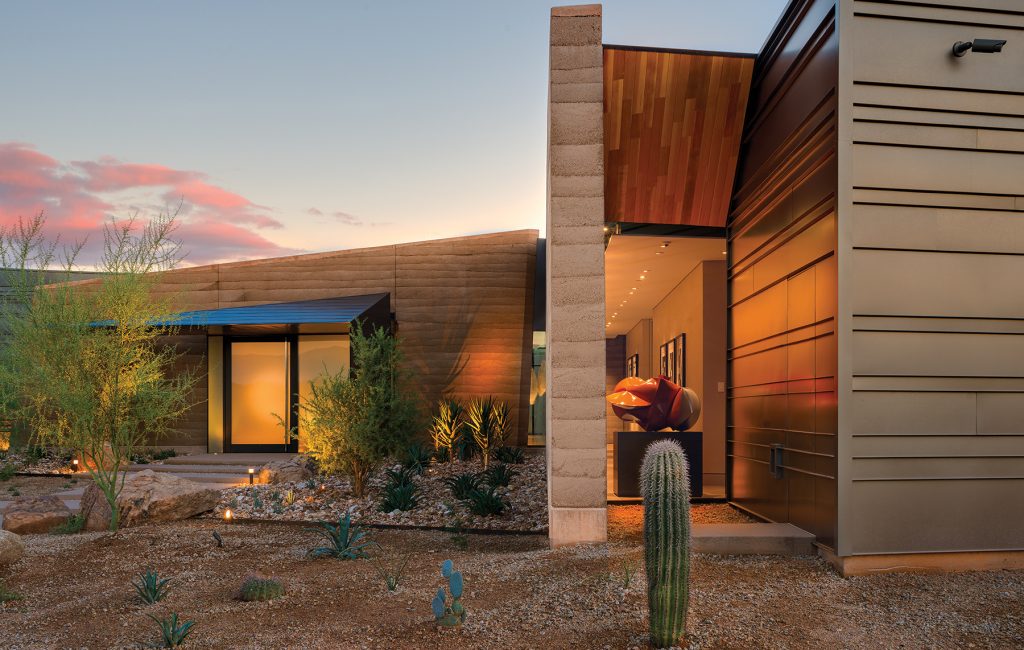 Light is as crucial a design element as the metal, concrete, wood, and rammed earth that make up the house. 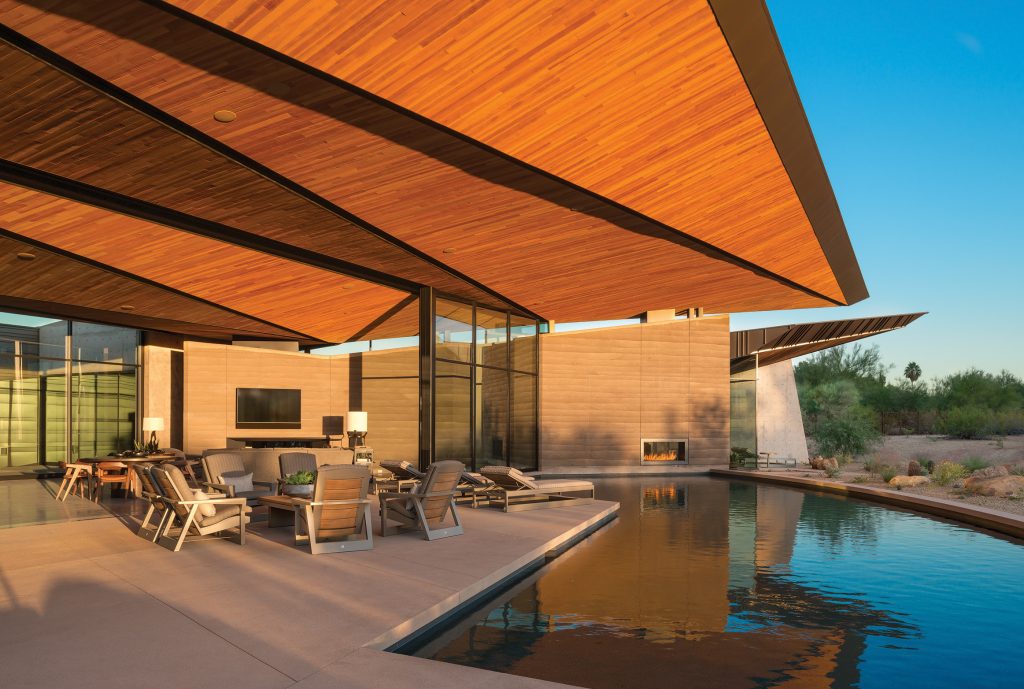 Sunset reflects off the pool onto the fractured planes of the ceiling and soffits, which were designed to evoke the thunderhead clouds of desert monsoons. The outdoor furniture is by David Sutherland.

“A lot of times, Modernism can be like living in an object,” Miller says. “But this house isn’t like that. It’s very much a spectacle, but as a space to inhabit, it feelssgood. It feels warm. I knew going in when Brent was selected that the house was going to be the main show. The interiors wanted to be more passive. I wasn’t interested in trying to outshout the building.”

Metal and rammed-earth walls at the entry provide shelter from the Western sun without giving away the drama to come; the design was inspired by the crystalline interior of a geode. ©Alexander Vertikoff | Vertikoff Archive

Miller designed the interior palette to reflect the hues of the surrounding terrain, adding subtle pops of color that only the desert can provide.
Kendle likens the spirit of the house to a hike through the desert landscape, where the ever-changing geography of boulders, canyons, and sunlight create mystery and a sense of a deeply private experience. “You feel like you’re the only person in the world having that experience at that moment, and it’s a gift,” he says. “We try very hard at our firm to create homes that do that.”