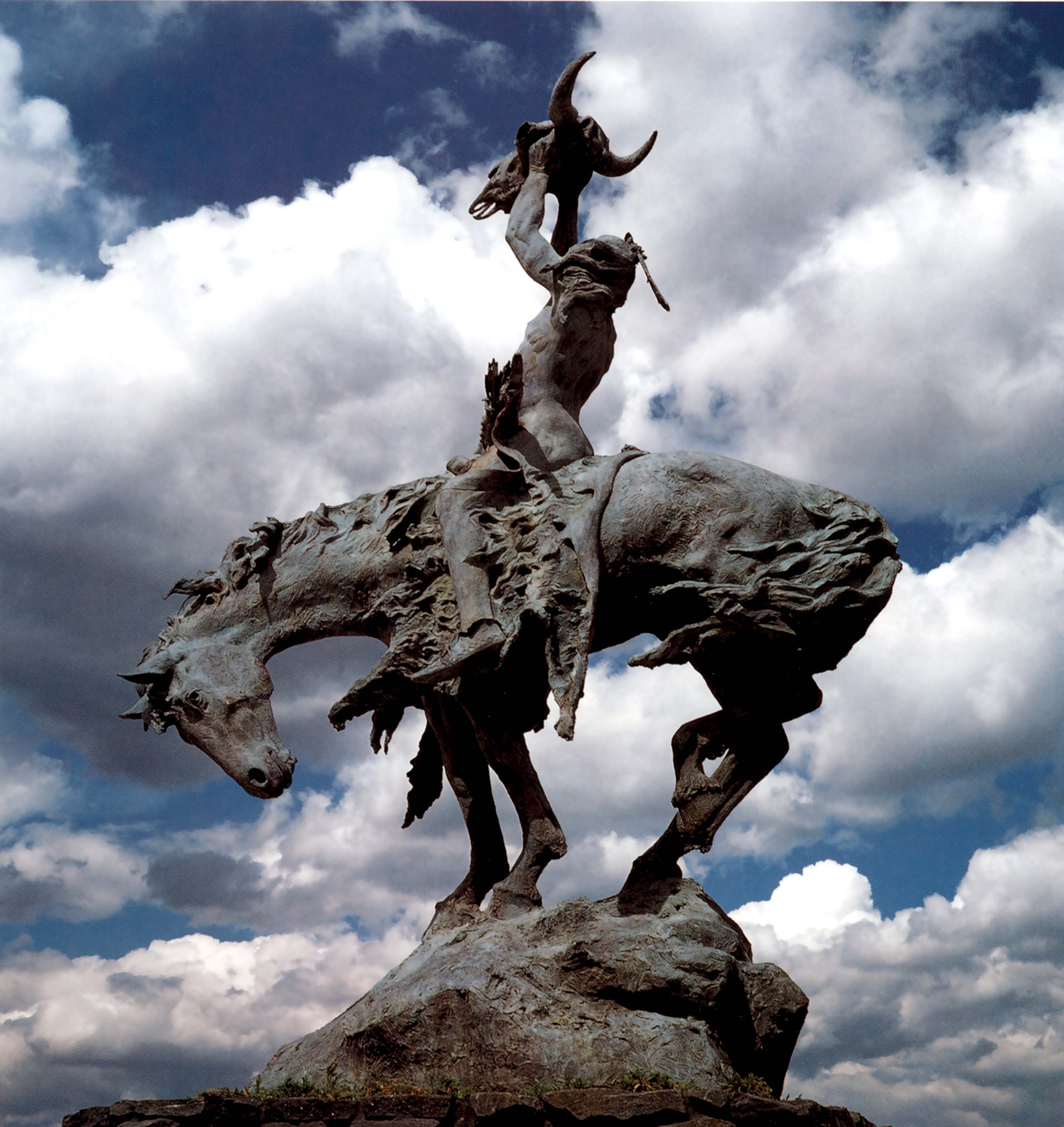 “IF I WOULD HAVE TOLD BUSTER MCCAIN I wanted to be an artist he would have had a heart attack!” Tucson artist Buck McCain recalls his father’s sentiments. But back then, it never occurred to the younger McCain that he would actually become an artist.

Raised on a working ranch in Southern California, cowboying was his brand. As a fifth-generation cowboy, not only did he not intend to become an artist, but, he says, he had never even met one.

Fast-forward 40 years and this February, Buck McCain is the featured artist at Joe Wade Fine Art for ARTfeast, an annual event sponsored by ARTsmart, a Santa Fe charity that raises funds for children’s art programs.

A stint on a Nevada ranch nudged McCain along the trail to becoming an artist. An ornery mount showed his temper one day and McCain landed upside-down on a rock and was laid up for some time. “A cowboy’s not used to that,” he says. “I had to find something to do to while away the hours. I started messing with art. … Well, I’d sorta’ already been messing with it, more or less, now it was more,” he admits with a grin. Ghost towns and wagons were subjects that McCain chose to hone his draftsmanship skills.

The road to artist stardom was anything but immediate for McCain. His early career encountered several twists and turns including a scholarship in pre-med studies; time living in Europe, studying the art and, well, the ladies; and a period devoted to helping Hollywood make films in New Mexico. encouraged McCain by buying his canvases of California ranch scenes. Still, McCain says, he didn’t plan on making art his career.

But fortune and painting continued as his constant companions, no matter where he went. Europe called, and he went. McCain met a beauty, fell in love, married her and lived in her native Switzerland. Still he painted scenes from the American West.

Meanwhile, back in the States during the 1970s, the Western art market was building up steam and the artist paid attention: “Remington and Russell had been considered illustrators and their art was never considered ‘fine art,’” he says. “Until their art started bringing ‘fine art’ prices … that was when folks who understood Western art quit listening to New York tell them what ‘fine art’ was and started buying what they liked.”

Once again, fortune put McCain in the right place at the right time. He’d hitched his wagon up with the Knox-Campbell Gallery in Tucson and that was a good thing. At his first one-man show in 1971, to his surprise, every painting sold.

Returning to the States, McCain settled in Santa Fe where sculptor Ernest Berke [1921–2010], who had cast his bronzes at the famous Roman Bronze Works (the foundry of Remington bronzes), became a mentor to the painter.

Once, on a visit to McCain’s studio, Berke declared, “Hell, that’s not a painting, that’s a sculpture! You’re working like a sculptor trying to paint around corners,” McCain remembers. Berke would become a major force in McCain’s training. With a pair of calipers as his model, Berke would encourage, then discourage McCain when he felt the work wasn’t the best the artist could do.

The education served McCain well, transforming the artist into a painter and a sculptor. Learning to choose which medium would best express his ideas became a constant challenge.

One night, McCain had a dream. “I had a crazy dream. I saw this Indian on a horse holding up a buffalo skull during a lightning storm. It was so real! I started painting what I dreamed and when Ernie (Berke) saw my painting, he said, ‘You can’t put this out on the market; it isn’t a painting, it’s a sculpture.’ So I started on a sculpture. I did a tabletop size and one day Ernie came in smoking and looking critical at it, accusing me of sloughing off. ‘Besides that,’ he said, ‘it’s the wrong size. You have to do it bigger.’ So I did it bigger. The first edition of The Invocation (also known as The Requiem) sold out in its entirety in one weekend in 1981, when the Cowboy Artists of America Show was taking place,” McCain says.

When The Invocation was featured in Architectural Digest in a story on a New York penthouse, a clamoring for the work started that day continues even now. McCain explains, “You can find The Invocation image everywhere: It’s on T-shirts and ash trays, you name it.” General Motors requested and used one in a commercial; then the Franklin Mint purchased the copyright for a different size of edition, changing the name to Prayer to the Healing Spirit. Today sculptures bearing a likeness appear worldwide.

McCain created an edition of seven in a monumental size at 13 feet 8 inches. One greets visitors at the Starke Museum in Orange, Texas, and another is at home at Leanin’ Tree’s Museum of Western Art in Boulder, Colorado. Sarah E. Boehme, Director of the Starke Museum says, “Buck McCain’s dramatic sculpture, The Invocation, has become an emblem for the art in the Starke Museum of Art. Situated on marble blocks as a streetscape, it is the first work of art visitors see as they approach the museum, and it creates a poignant effect. Its bold composition and expressive content provide a counterpoint to the cool lines of the museum’s architecture. The artist’s statement that the sculpture portrays ‘the moment when human aspiration soars and we rise above our daily lives,’ gives The Invocation a meaning that goes beyond its specific subject.”

What McCain calls his “Aha!” moment in painting came when he was working on his popular “cave” paintings. “My cave paintings were a complete accident. I’d always been interested in petroglyphs, but when I tried to paint an Indian doing petroglyphs it was pathetic. I painted the rock, let it dry, glazed it and put the petroglyphs on it. That didn’t work. Then I said to hell with it and put a dark reddish stain as the rocks and used the handle of the brush to scratch through the dark and that was it! Which is interesting because that’s how the Indians created the petroglyphs — by pecking through a layer of rock to a lighter color underneath,” he explains.

From there, McCain had the idea to set his paintings in dark places, rather than in sunlight, with fire as the primary source of light in each. “It evolved and became a whole new fascination — chuck wagons by firelight, cowboys with kerosene lamps — fire is primal. Any time you light a candle or sit in front of a fire, magic happens, everything becomes beautiful,” he says.

Judy Wade, owner of Joe Wade Fine Art, where McCain has shown for 37 years, sums up the artist’s work this way: “It is said objective truth is the proper measure of genius, not fame. If this is true, Buck McCain is, indeed, a genius. He deserves praise and recognition for his God-given talent, and for adhering to his principles and doing it his way. Just look at what he has done — his work says it all!” 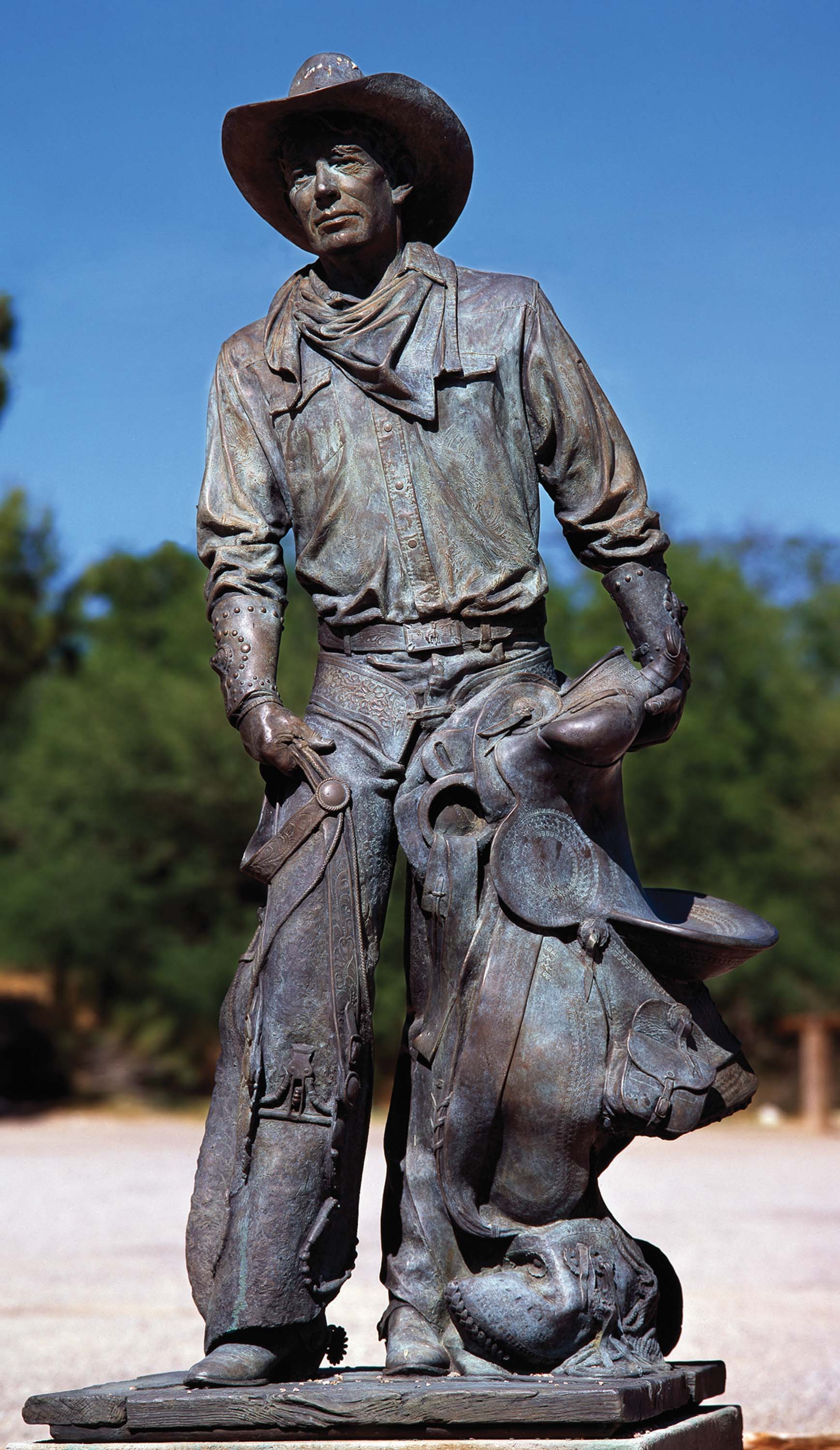 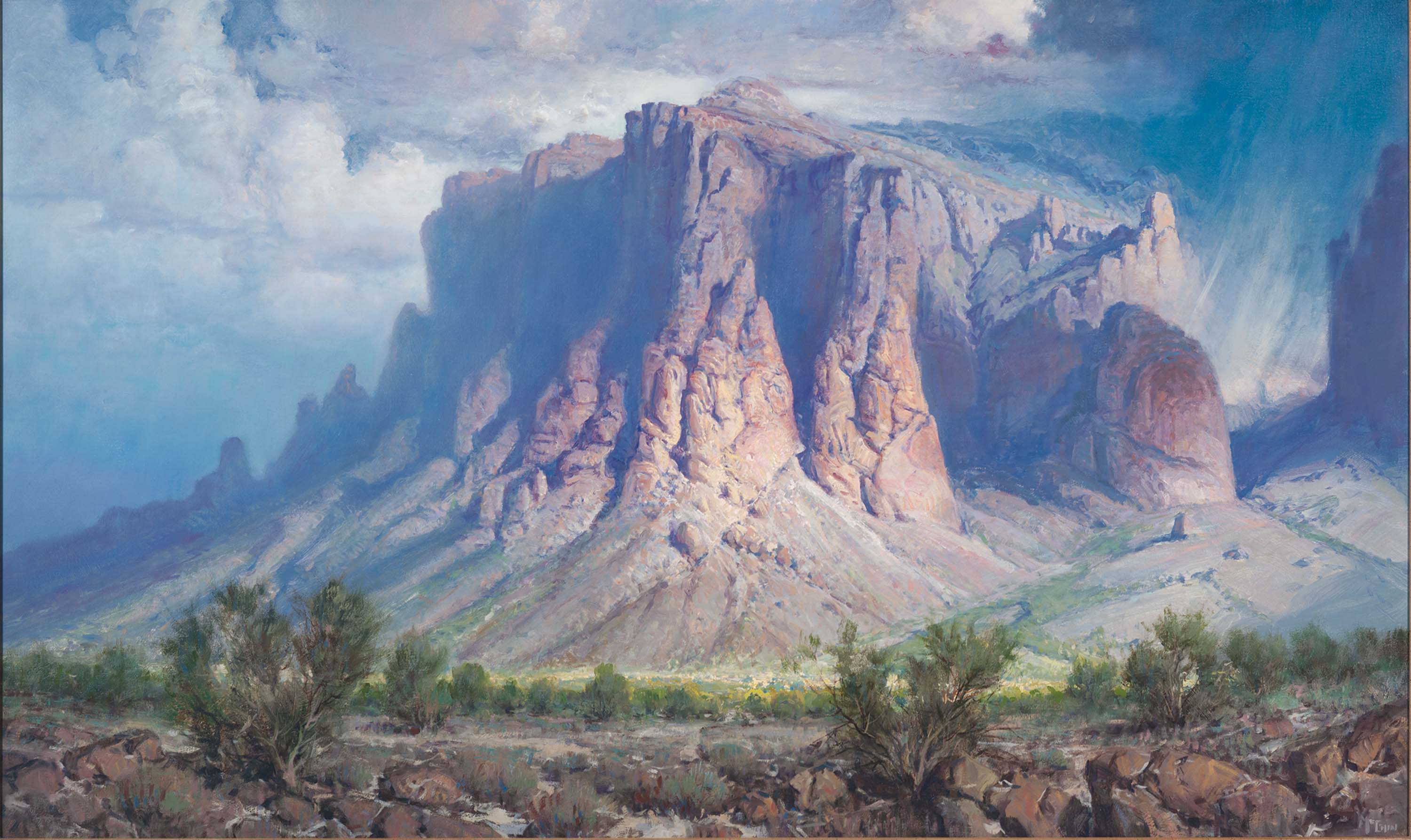 “Storm Over the Superstitions” 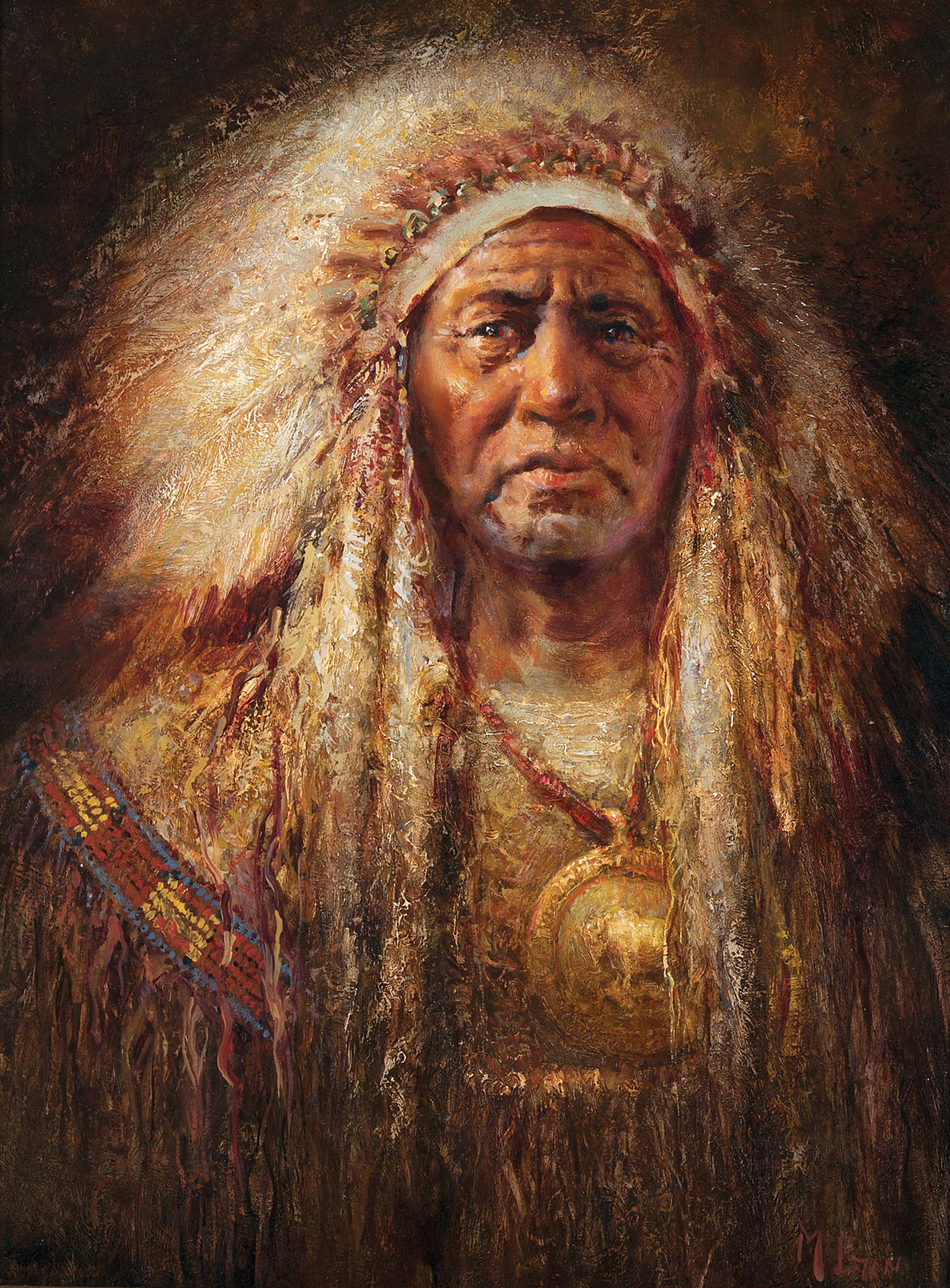 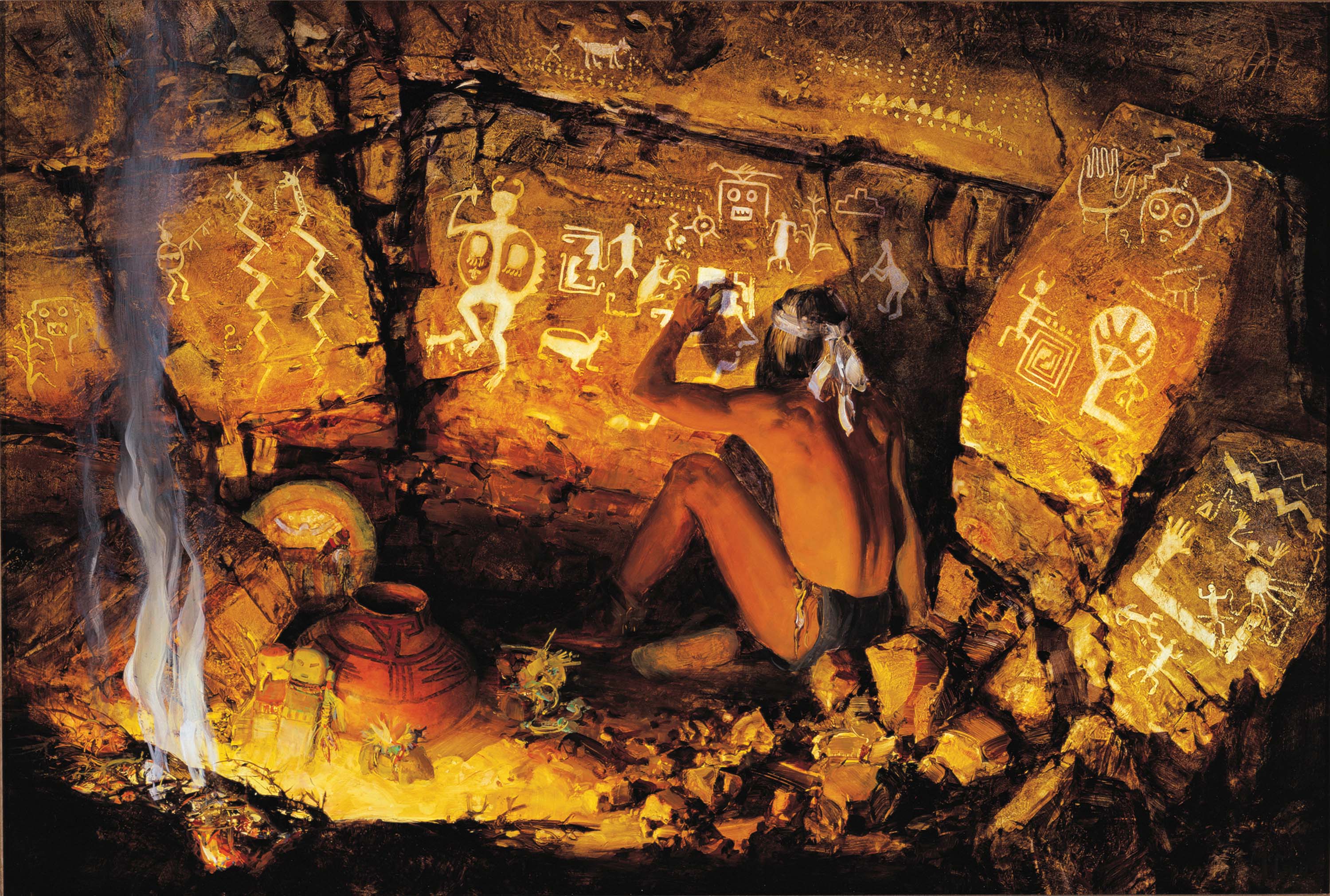 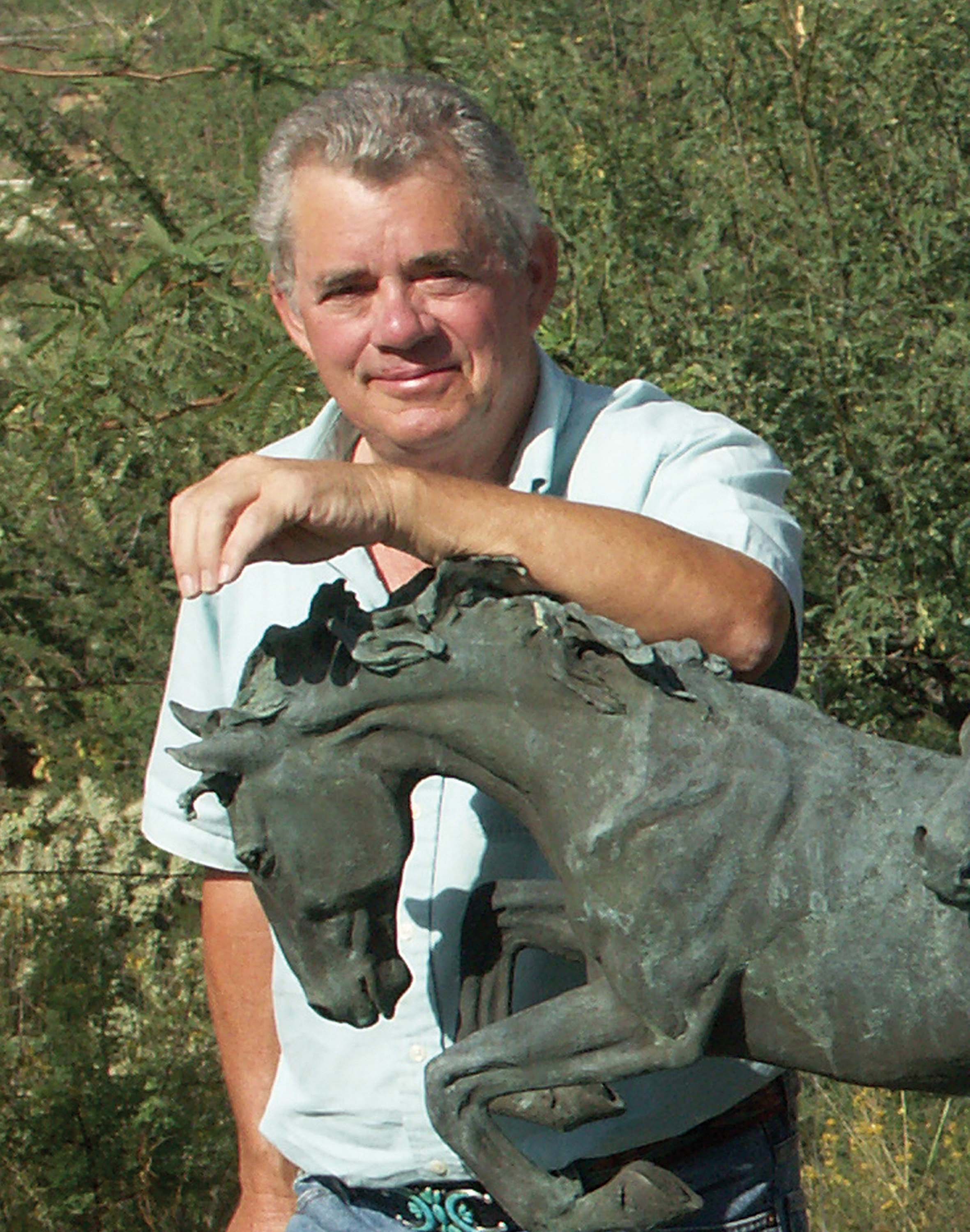