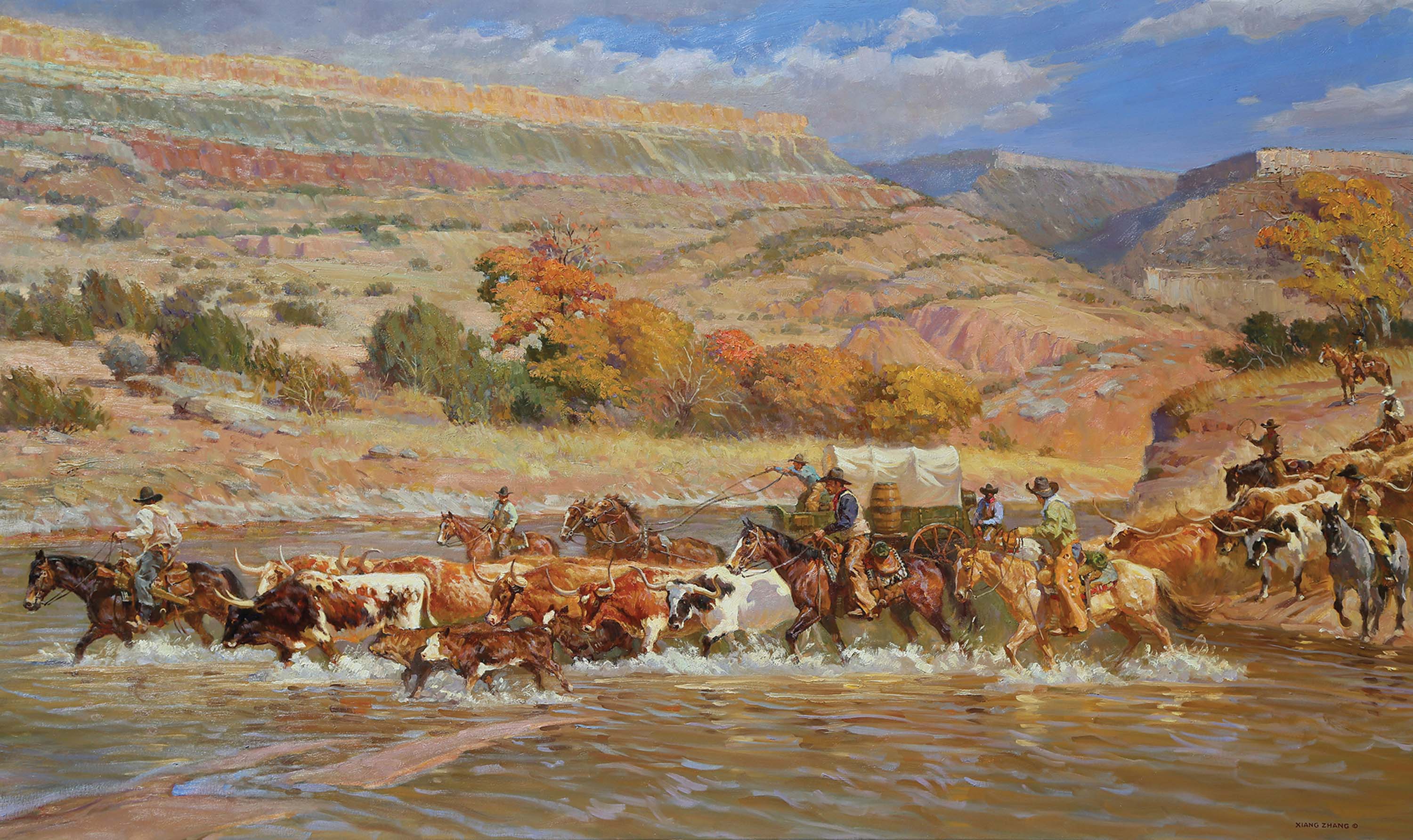 “I WAS JUST BLOWN AWAY WITH XIANG'S ABILITY and his talent, not to mention the fact that he came from a different culture completely,” marvels Chris McLarry, owner of McLarry Fine Art, when asked what drew him to Chinese-born Western artist Xiang Zhang (pronounced Shong Zang) when they first started working together 20 years ago. “I can’t imagine a guy from Texas going to China and becoming a top Chinese artist. It’s just phenomenal.”

It may seem unlikely that someone who grew up in the Sichuan province of China and moved to the United States as an adult has become a full-time artist who creates incredibly vivid, historically accurate and drama-filled Western paintings. But perhaps it was destiny. Zhang, who now makes his home in McKinney, Texas, was born in the year of the horse, and his infatuation with the animal started at a young age.

As a child, Zhang walked two miles through the Chinese countryside to get to school, and along the way he passed farmers working their fields with horses. “The horses inspired me, and I would stand on the side of the road to draw them,” explains Zhang, who says that at the time he copied the style of Xu Beihong, a famous Chinese artist who introduced Western painting techniques to China. What started out as black ink on rice paper has evolved into scintillating colors and expert strokes with oil paint on canvas and linen.

“First you are drawn to his vibrant and bold brush-strokes… then you look down at that distinctive name and are pleasantly surprised,” exclaims Jessica Elliott, interim executive director and board member of the Briscoe Western Art Museum in San Antonio, Texas. Elliott also coordinates the museum’s annual Night of Artists sale and exhibition in which Zhang has participated for 10 years. “I think he must have been an American cowboy in a former life,” she jokes.

So how did the boy from China make his way to Texas? After graduating from the Central Academy of Drama in Beijing, Zhang taught art classes at the Beijing Broadcasting University before moving to New Orleans in 1986 to obtain his master’s degree in fine arts. Zhang applied to six American universities to study set design and ultimately chose Tulane University because they offered him a full scholarship — an important factor since he arrived in the U.S. with just $100 to his name.

Upon earning his degree, Zhang designed sets for the New Orleans Opera House before moving with his wife and daughter to Dallas to take a job as a graphic designer. But it was fine art, not commercial art, that captivated his heart, so in 1995 he quit to pursue his dream of painting full time.

Right after he turned in his resignation, Zhang was selected to participate in the Top 100 of 1995 Arts for the Parks exhibition, and ultimately won the U.S. Art Magazine Award of Merit in that show for his painting entitled Kids Band, the first of many accolades.

Since then, the composition of Zhang’s work has evolved. “His paintings have gone from simple, one horse-one rider scenes to these really complex, epic, historical masterpieces with 100 figures depicted,” says McLarry. One example is the 50-by-82-inch, oil-on-linen piece, Arriving Fort Worth, which illustrates a longhorn cattle drive trudging through Fort Worth on its way up the Chisholm Trail from San Antonio to Kansas in the late 19th century. Zhang was inspired to commence the painting after visiting the historic Fort Worth Stockyards and watching the modern-day cattle drives, which are reenacted twice daily down Exchange Avenue.

It seems that Zhang — who experts agree has carved out a new category in Western art that is as much impressionistic as it is realistic — is a pioneer, just like the figures from the bygone era that he paints. “You look at one of his paintings from a distance and you can tell that it’s obviously some Western scene representationally,” McLarry says. “But then, you zoom in to one little part of it, and you can see the technique in the brushstrokes and you realize that it’s completely an abstract painting.” For instance, McLarry explains, “He will paint a cowboy on a white horse, and you know it’s a white horse. But when you get closer to the image you can see that there are 12 different colors in that white horse — purples, reds, greens — and it works! It’s truly remarkable.”

Zhang also has a gift for capturing movement in a diversity of subjects ranging from Russian ballerinas and flamenco dancers to horses on the run. “Movement makes an image come alive,” Zhang points out. He uses quick sketches — a drawing technique that his tutor taught him when he was young — to capture the shape of an image before composing it on canvas. “Movement is important for Western art and dancers — the beauty is when they move. I just so enjoy when cowboys are moving. Most of the time their life is like that.”

Not only does Zhang pay close attention to the accuracy of the architecture and period clothing of his subjects, but the precision of the shapes he creates is impressive, a skill he says his extensive work with portraiture has helped hone. “Xiang’s ability to accurately represent anatomy — whether it’s a horse or a figure — is surpassed by none,” praises McLarry. “To be able to paint something correctly, you have to be able to draw it correctly, too. Xiang can do this really well, and it’s something most contemporary artists miss.”

This mastery of movement and anatomy is illustrated in the piece that Zhang says is most representative of his artistry, the 48-by-84-inch Oklahoma Land Run 1889. “It shows my ability to convey people’s expression — the horse movement and the life of the scene. There is a massive amount of action and expression in this piece.” He adds that this work is also symbolic of America. “Everybody is equal at the starting line, but then after you pass that line it’s all about how hard you work.”

Zhang also has a gift for capturing movement in a diversity of subjects ranging from Russian ballerinas and flamenco dancers to horses on the run.

This attitude is one that McLarry says Zhang has embodied throughout his career. “He’s the hardest-working artist I’ve ever worked with — he is so dedicated to his craft.” McLarry adds this compliment about the man whom he characterizes as intelligent, kind and both a good friend and partner. “All great artists are born with talent, but great, great artists hone it with research and hard work. That’s what Xiang has done. I think that his cultural background gives him an advantage over a lot of other artists because he was taught a strong work ethic and dedication at an early age in China, and it hasn’t wavered over the years.” 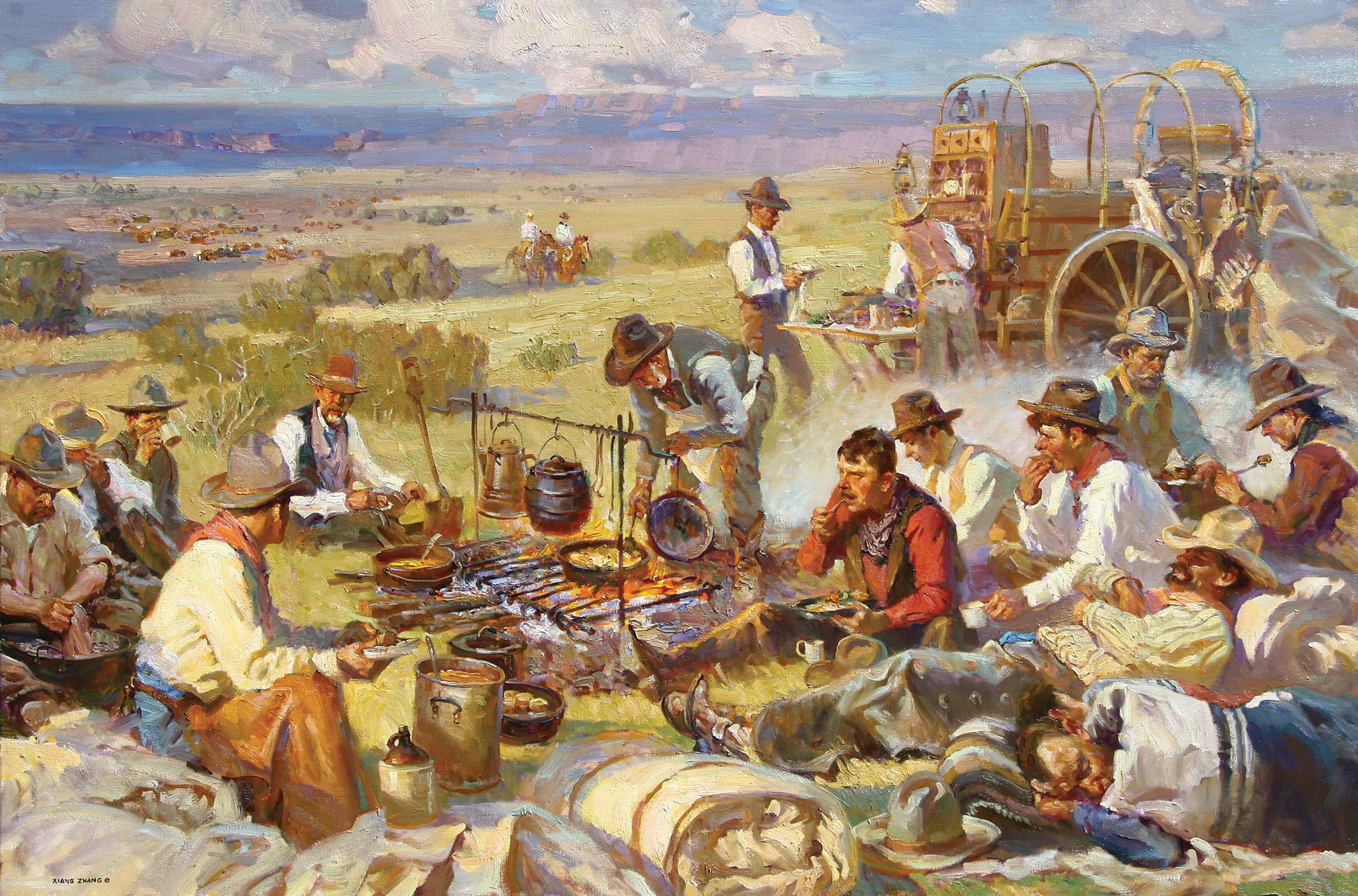 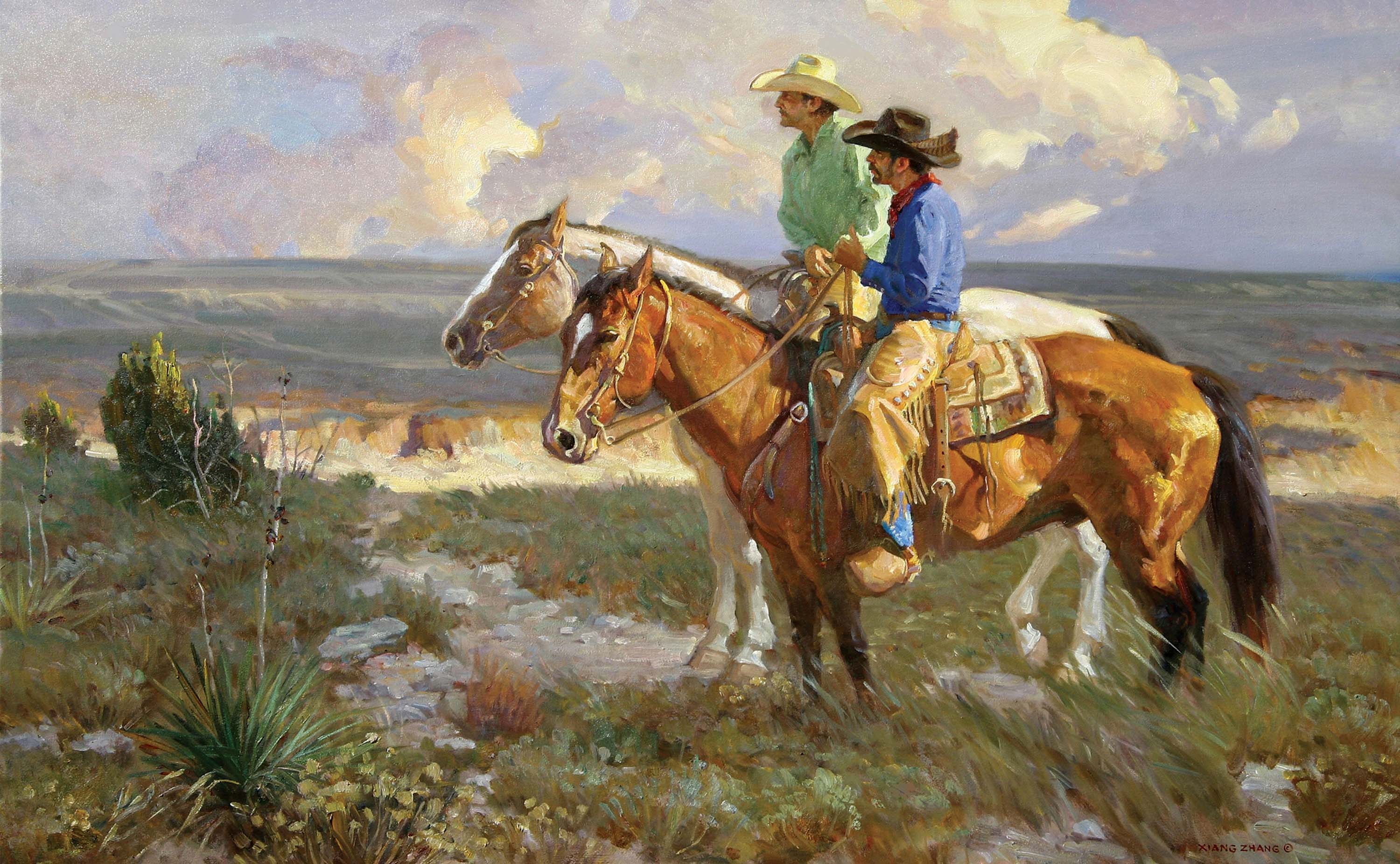 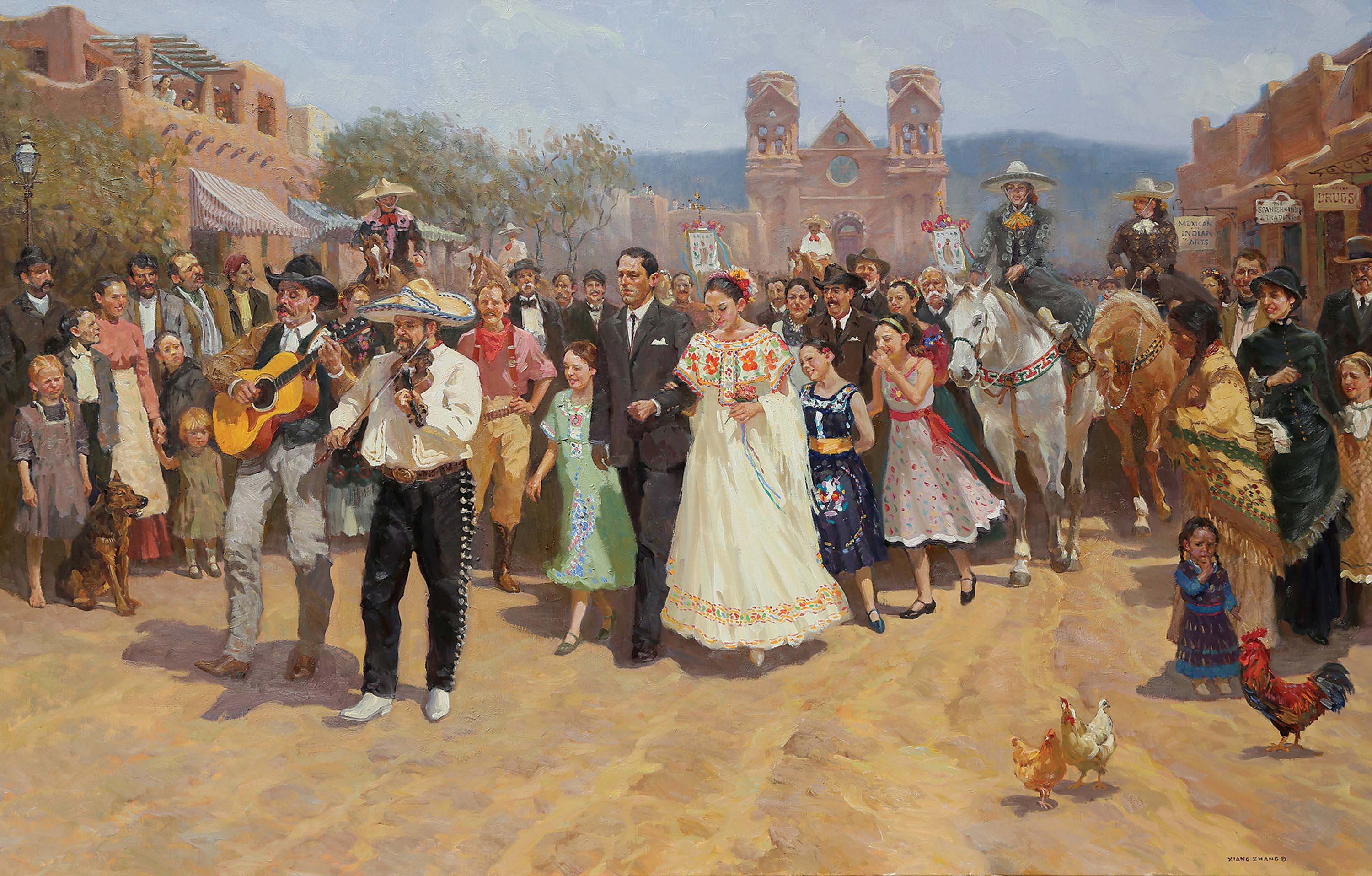 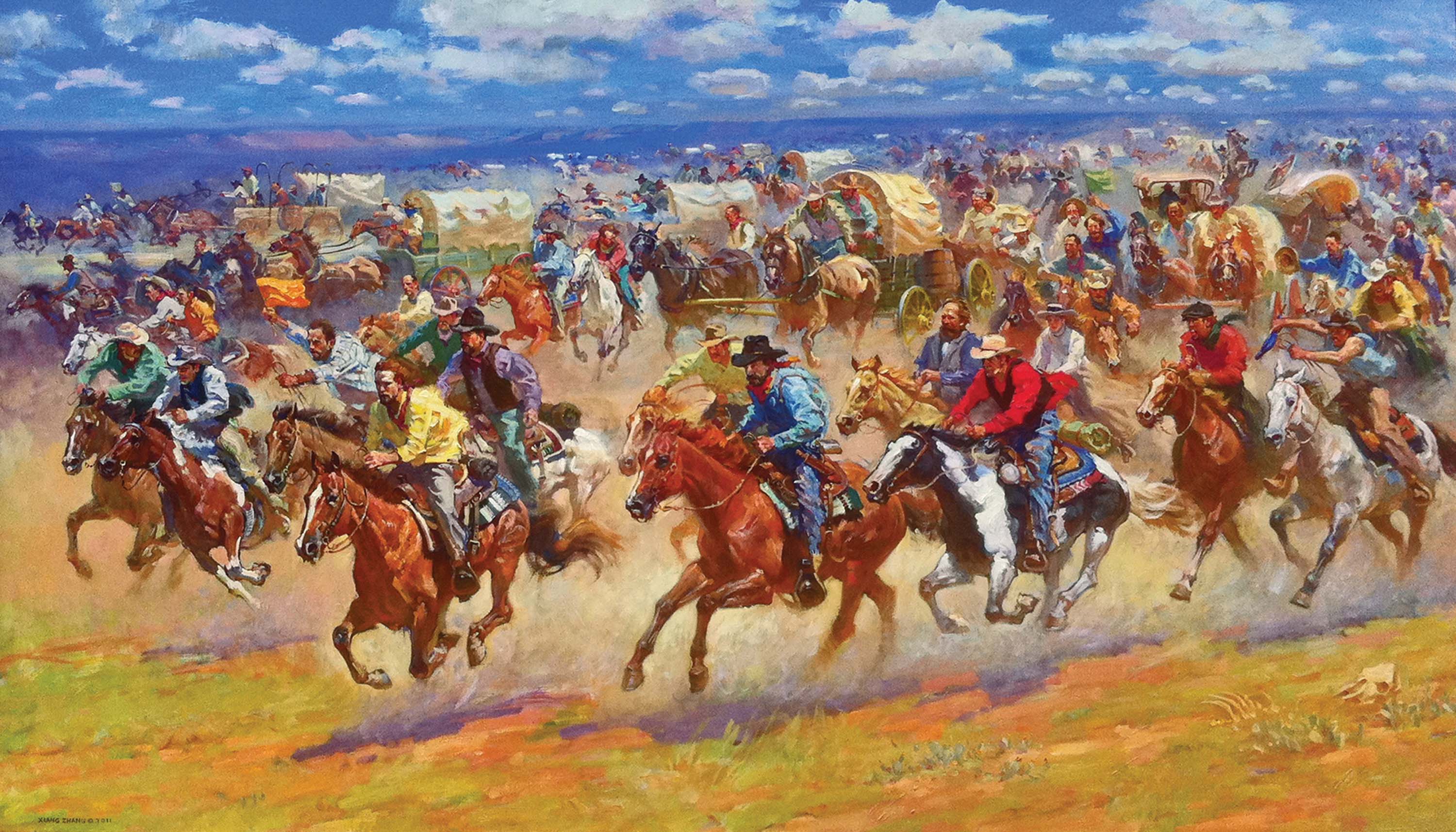