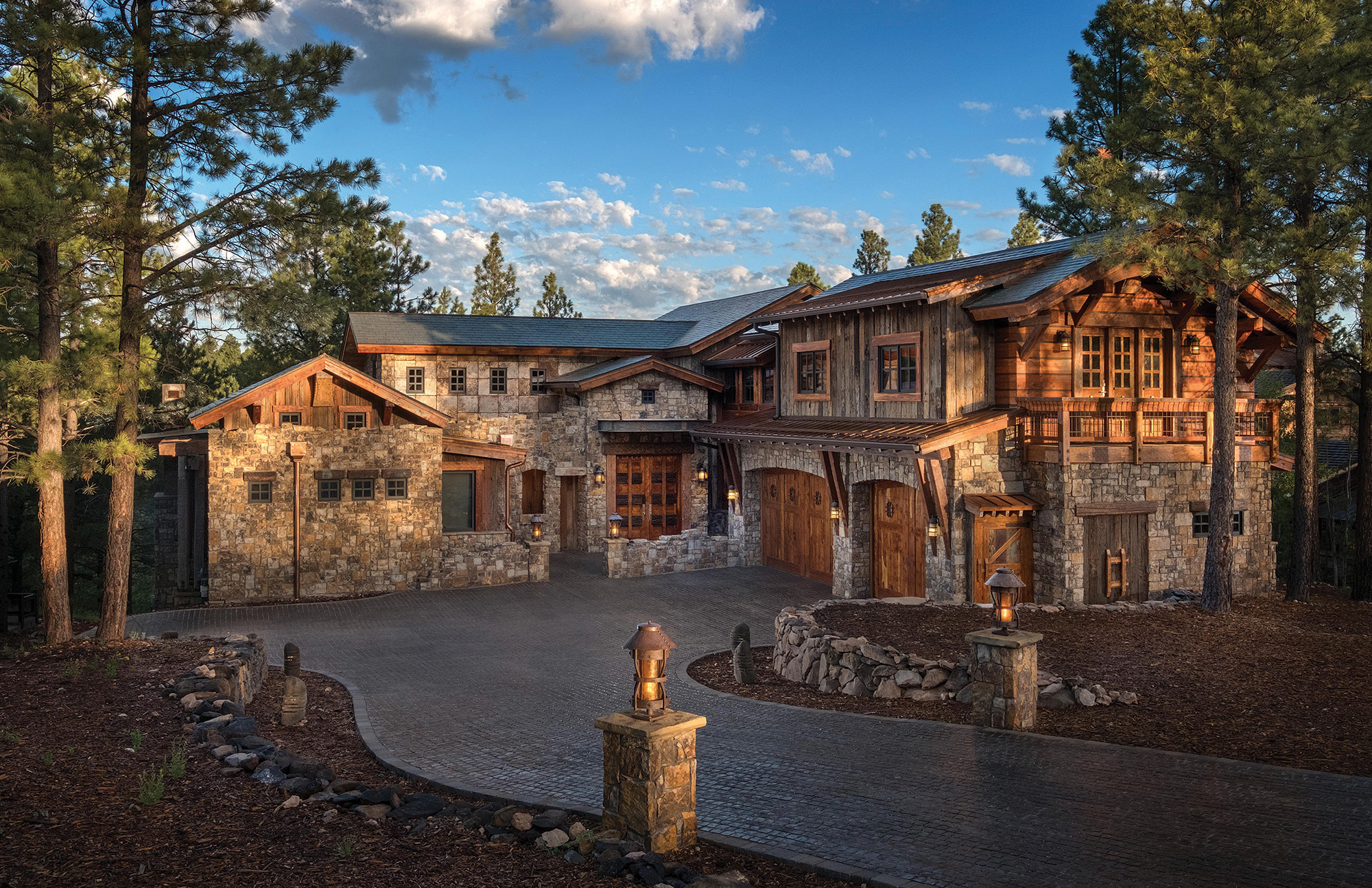 Telluride Stone provided the stonework that feels indigenous to the environment while blending seamlessly with the Asian-influenced architecture. Indonesian timber and historic metal panels were incorporated throughout the exterior.

JASON SCOTT'S JOURNEY TO HIS HOME began thousands of miles away and spanned two decades. During the process, he uncovered antique treasures from the Indonesian island of Java, found a creative passion and began a lasting affiliation with a community of craftsmen. His unique residence, nestled in the sloping ponderosa forest of Flagstaff, Arizona’s high desert, stands as the capstone of his evolution from antiques dealer to furniture designer.

Scott collaborated with Jamie Daugaard, principal of Centre Sky Architecture, to help realize the vision for his new home. Known for its Mountain West style, the firm specializes in designing sustainable homes that integrate with the environment from its offices in Big Sky and Bozeman, Montana, and Parker, Colorado.

The two men spent a year planning the home — which they named Flagstaff House — and they had a solid relationship from the beginning. “I knew [Daugaard] was a guy with great ideas, and I knew it was going to be a good fit,” says Scott.

“After initially spending two days together working on the site plan, we discovered we were pretty similar,” Daugaard adds.

The dense, mature trees on site informed the home’s foundational design. It was as important to minimize the impact on the environment as it was to maximize the views of the forest, Daugaard says. Ultimately, only three ponderosas were removed from the site during construction.

The stone façade forms high and robust horizontal lines and a low profile, reminiscent of Indonesian architecture, and grounds the house amid a backdrop of surrounding trees. The stone yields to timber and weathered metal, harkening to the region’s Mountain Modern vernacular.

After spending years salvaging wood and metal in Indonesia for his business and transforming a small village near Java into a furniture manufacturing hub, Scott had a stockpile of historic materials to include in the home. His company, Jason Scott Collection, restores teak from abandoned structures and employs more than 200 people in three warehouses in and around Java.

“With Jason’s background, we knew that the project would have Asian influences,” says Daugaard.

It seems every detail has a story to tell. Incorporated throughout Flagstaff House are Scott’s salvaged materials. What were once the ceiling panels from a Javanese sugar plantation some 150 years ago are now patinated window frames. Inside the home, virtually every built-in component was personally sourced or designed by Scott, beginning with the joglo that characterizes the entry. This intricate, articulated ceiling, common in Javanese homes, was handcrafted by artisans who work for Scott. And above the joglo, a 30-foot bridge features glass floor panels that reveal the carving on the top of the interior roof.

In the living room, clerestory windows above the fireplace bring in natural light while maintaining intimacy. This theme is carried throughout the home, with high windows bringing in soft, diffuse light.

The living room opens onto an expansive deck constructed with 200-year-old ironwood rescued from a railroad bridge in Borneo. “Over the years, I had accumulated these massive beams from old buildings even though I wasn’t sure at the time what I would do with them,” says Scott.

Each of the home’s doors are crafted from antique wood. Teak scraps, initially thrown into fire piles, became the cladding for the master bedroom’s walls and make a pathway to the master bath, where a bathtub carved from a massive stone imported from Java is the centerpiece. The wall beyond the tub is sandstone and features a relief of a lone tree that seems to bend with the wind.

“With so many materials, the challenge was trying to make the right decisions and not overdoing it,” Daugaard says.

Every room invites sensory exploration, every surface is custom-crafted and rich in detail, and every beam is steeped in history. Flagstaff House is a combination of one man’s devotion to masterful design and another man’s commitment to integrative, sustainable architecture. But for Scott, the best part about his home is its ability to conjure images from his life.

“I just remember so much,” he says. “I can go into a room and see a beam, and I have memories of buying that wood. It’s wonderful to live in a home when you have been part of the process of making it.” 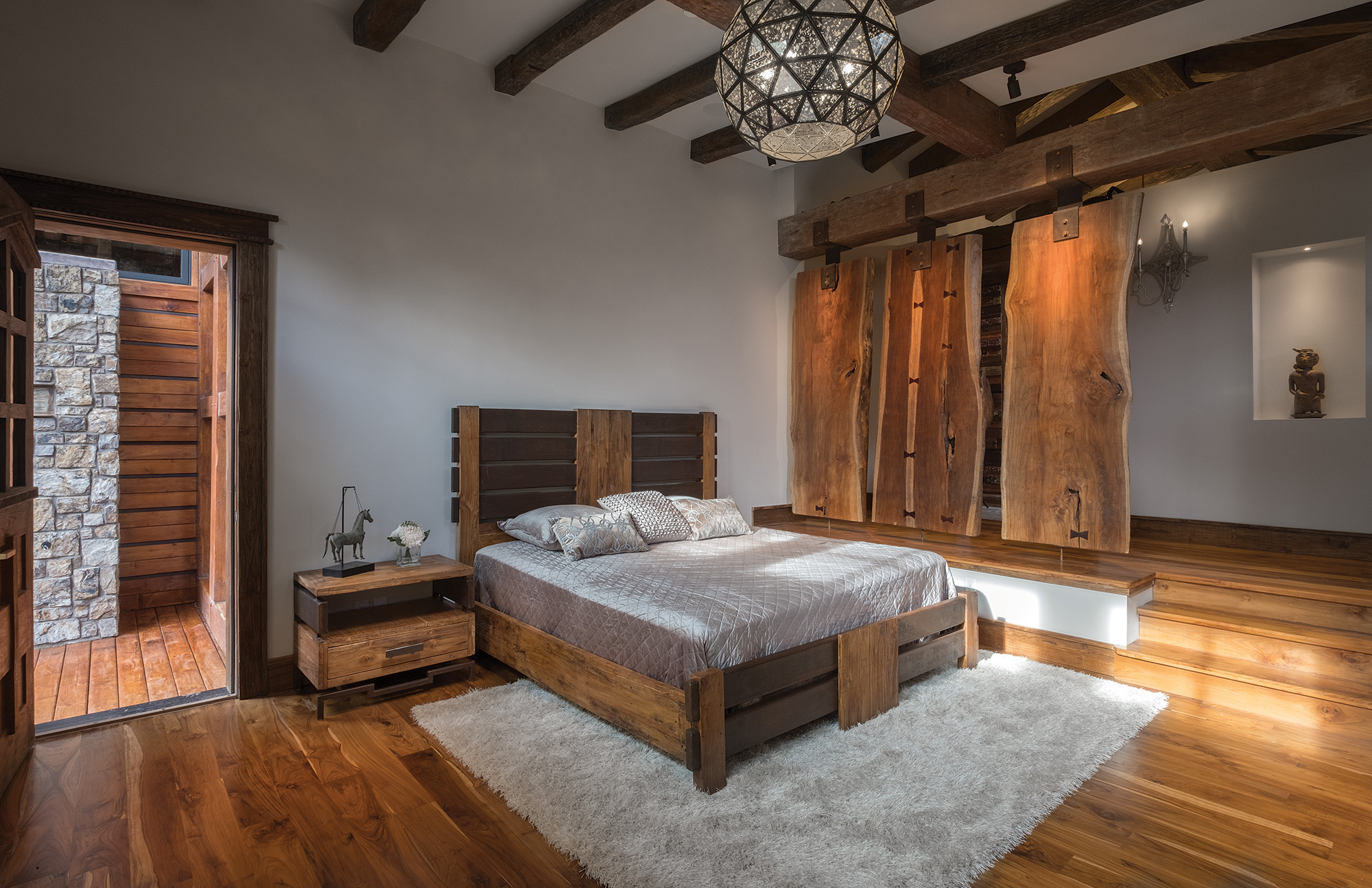 Large, live-edged slabs “levitate” at the entrance to the master suite, creating a divider with views into the room. The bed was design by the homeowner using vintage wood and metals. The spherical light is by Currey and Company. 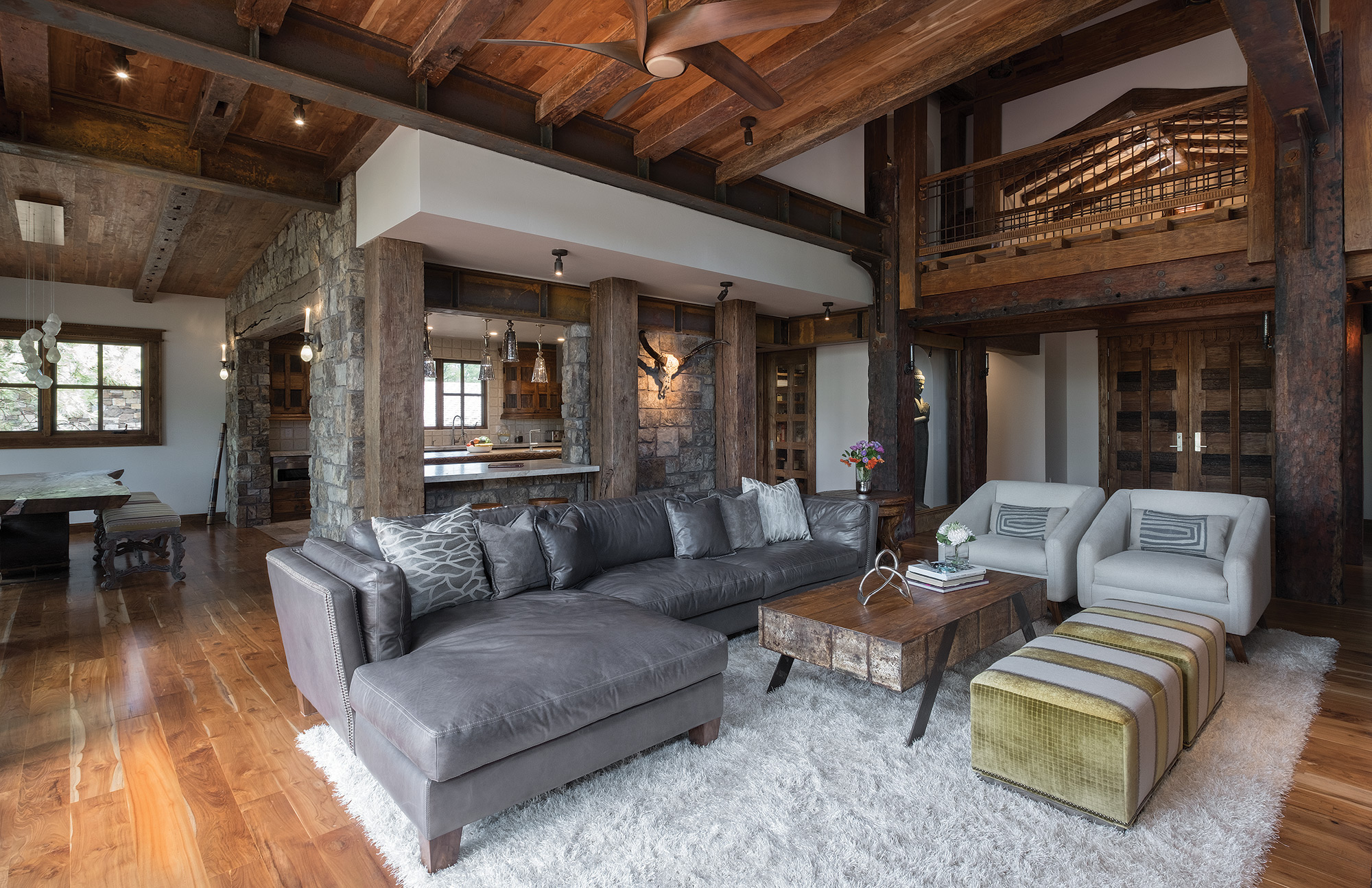 The living room features a sofa inspired by a picture of an art deco sofa and was created by interior designer Suzanne Biers. The cube-shaped ottomans are also custom and the coffee table is from Jason Scott’s Modern Mountain Collection. 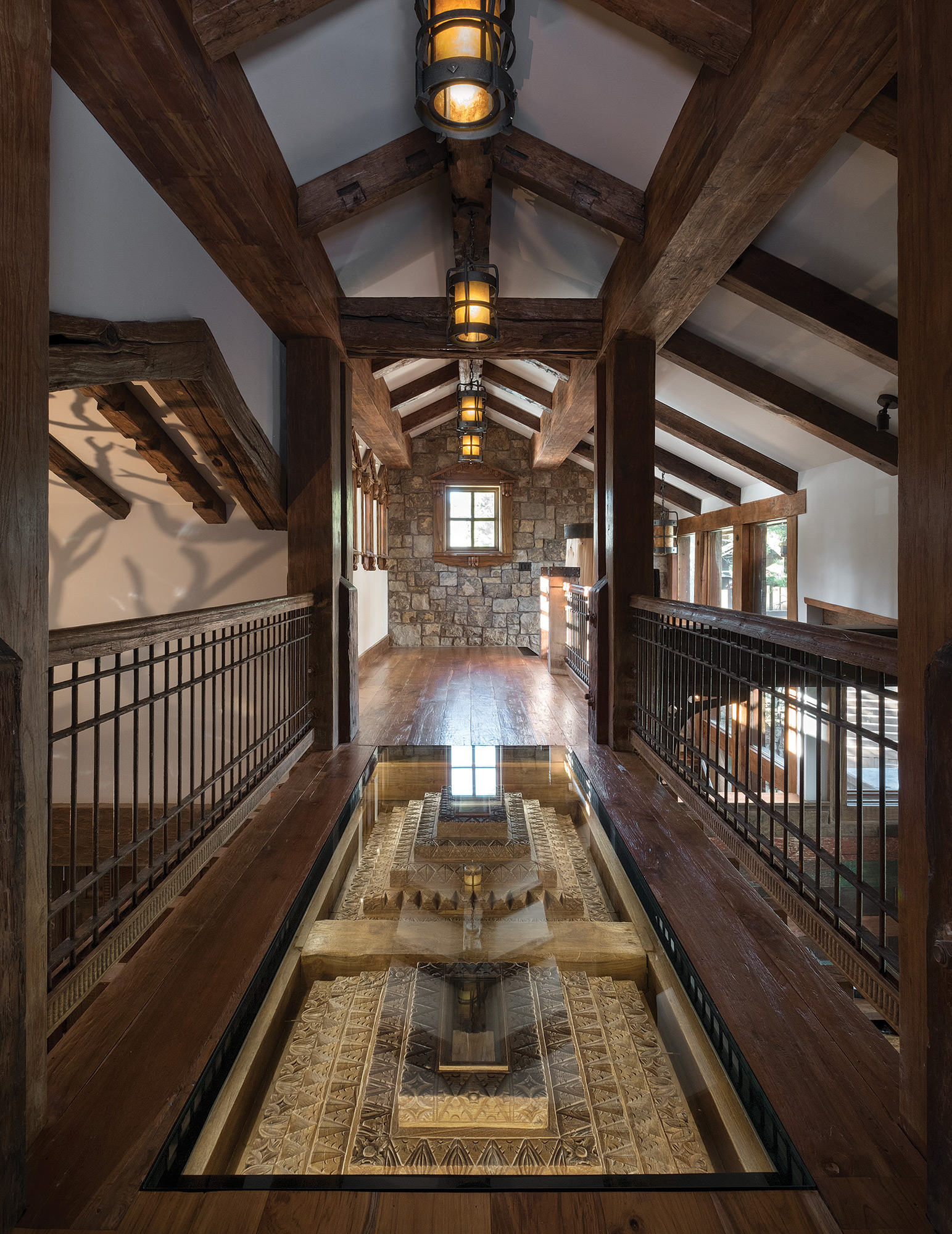 A bridge with a reinforced acrylic window allows the carvings on top of the joglo in the hallway to be seen from above. The industrial lantern-style lights are by Hammerton. 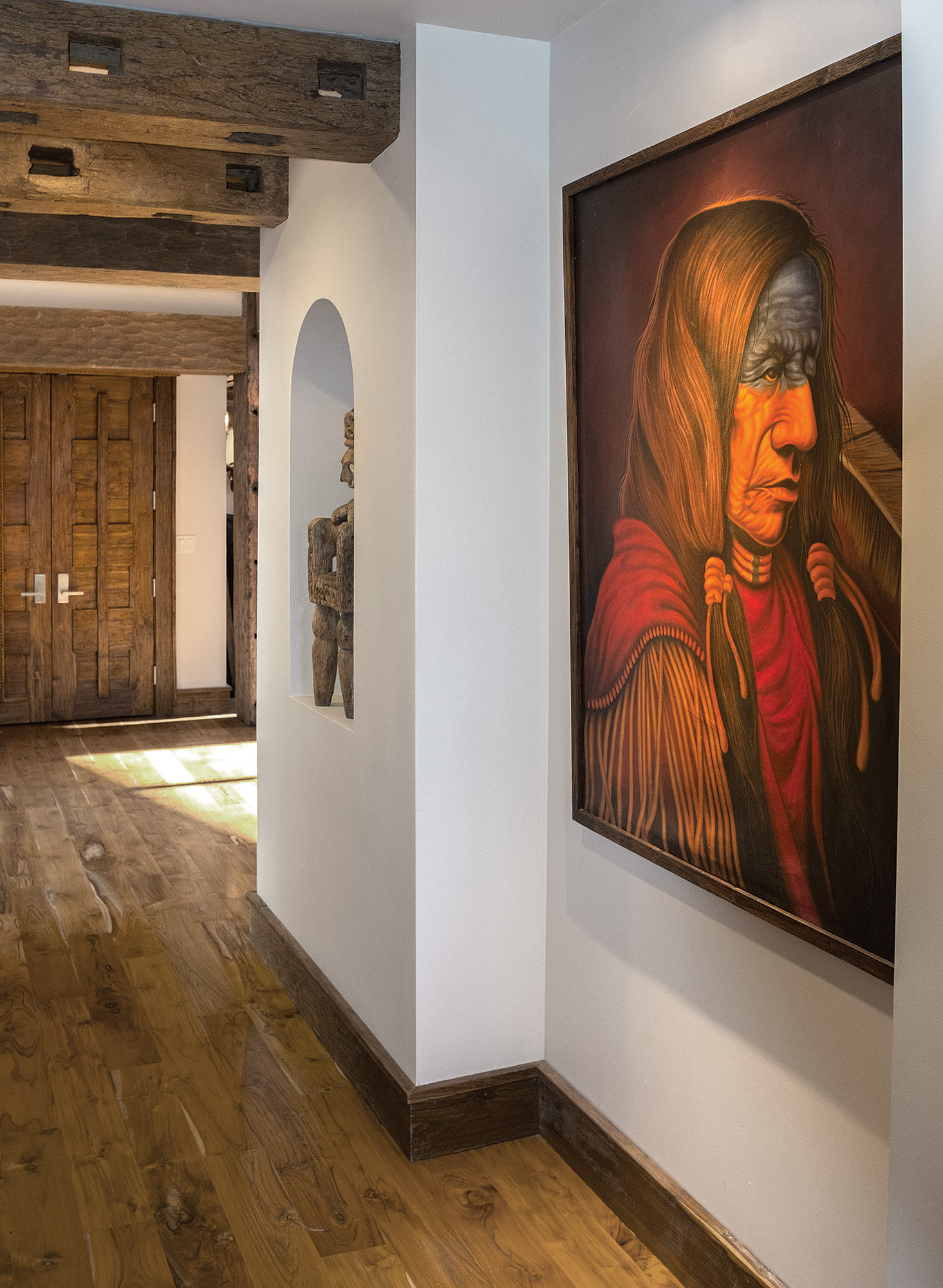 The walls, painted Sherman Williams’ Light Gray here and throughout the house, establish a neutral backdrop for a painting by Irawan, a Javanese artist. 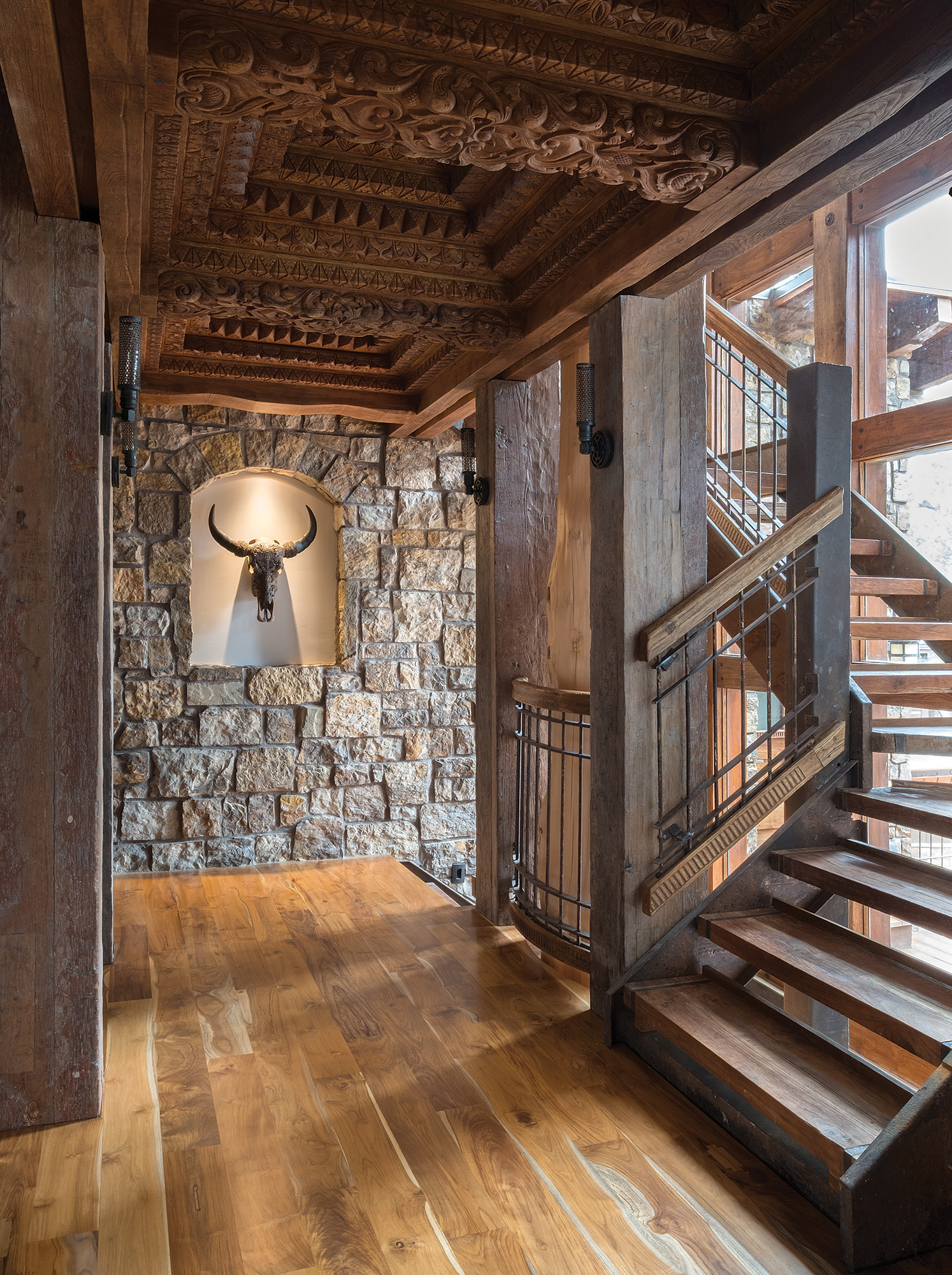 The entry to the Flagstaff House features a joglo ceiling panel, hand-carved by Indonesian craftsmen for homeowner Jason Scott. Hardwood floors made of antique teak and beams of aged steel create a historic aura. 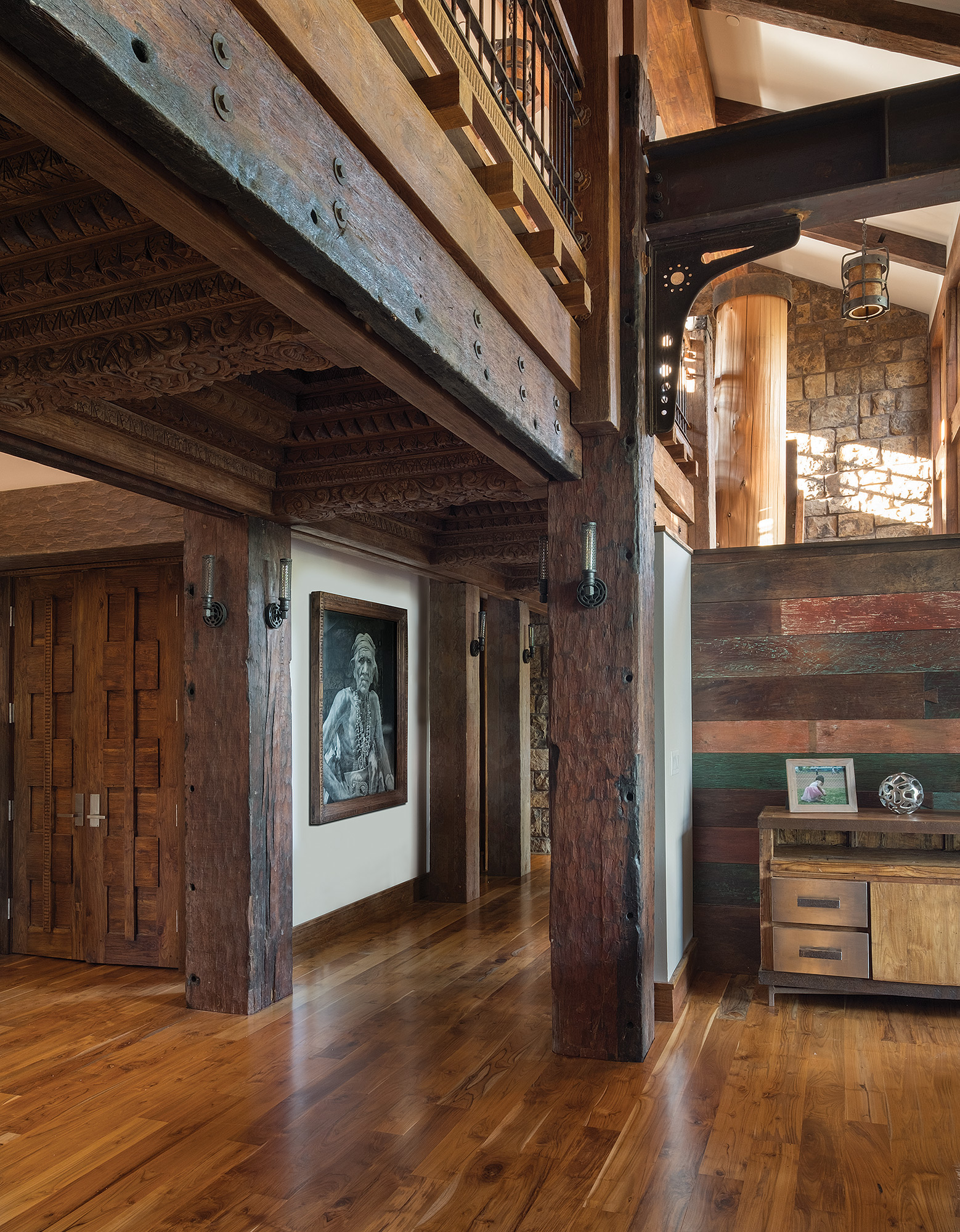 Ancient wood posts and weathered steel provide structural support for the joglo and bridge above. A sideboard from Jason Scott’s Modern Mountain Collection sits before custom-clad walls. Both elements are made with teak, reclaimed from Indonesian homes. 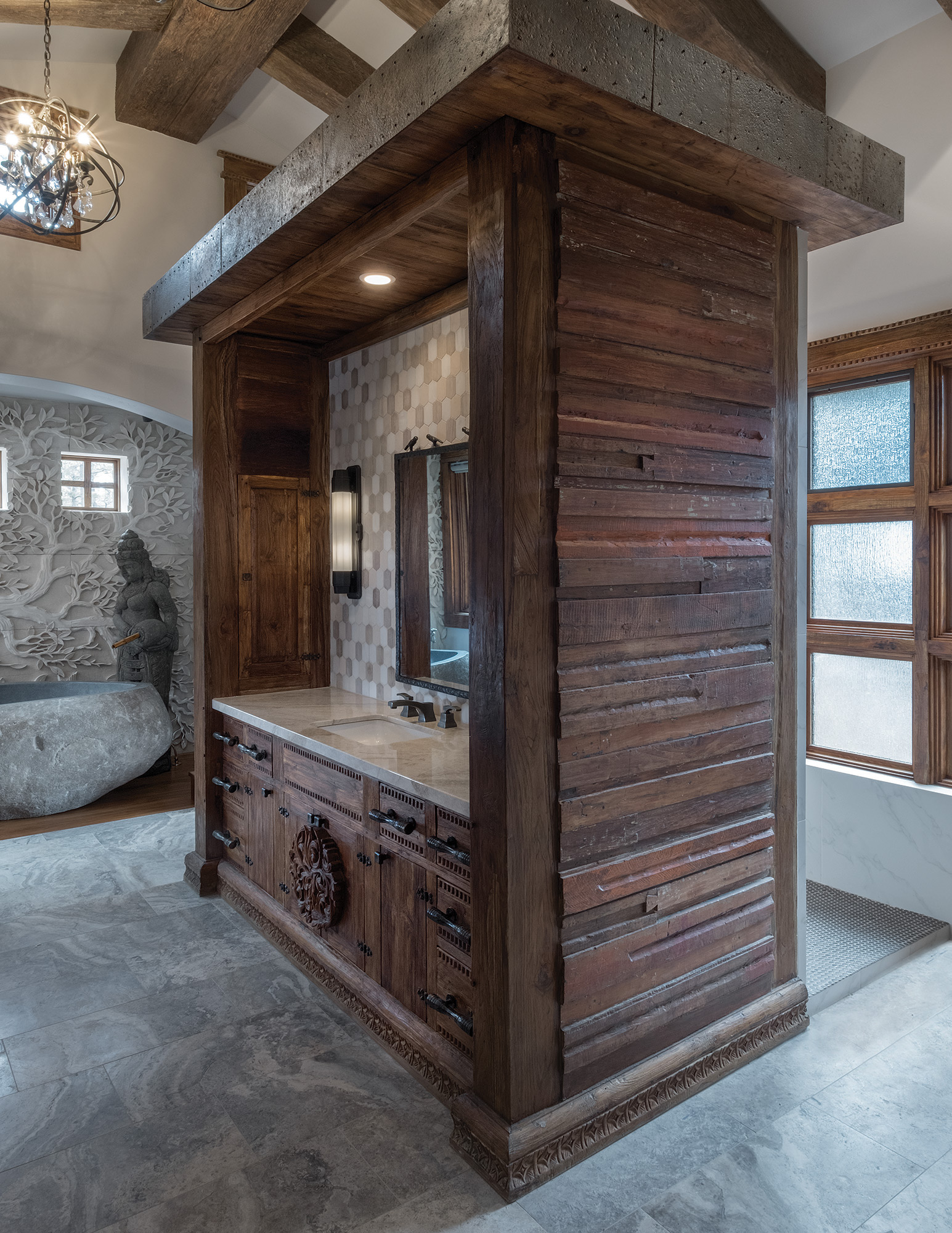 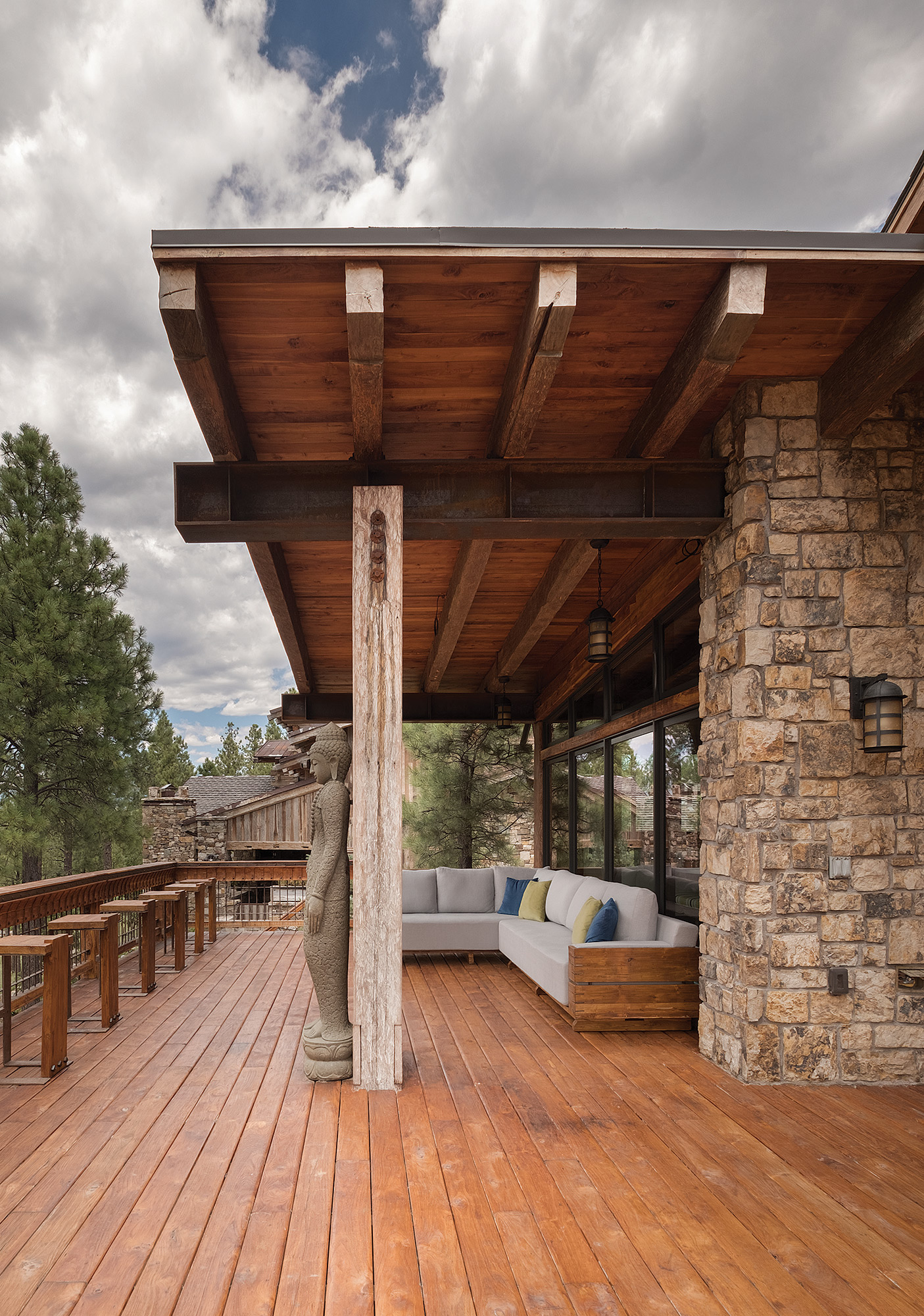 The expansive deck, made of ironwood from an Indonesian rail bridge, features a custom sofa and teak stools. The 12-inch-wide railing serves as a bar top that gives each diner a view to the ponderosa forest beyond. A standing Buddha statue with a delicately carved robe faces the vista. 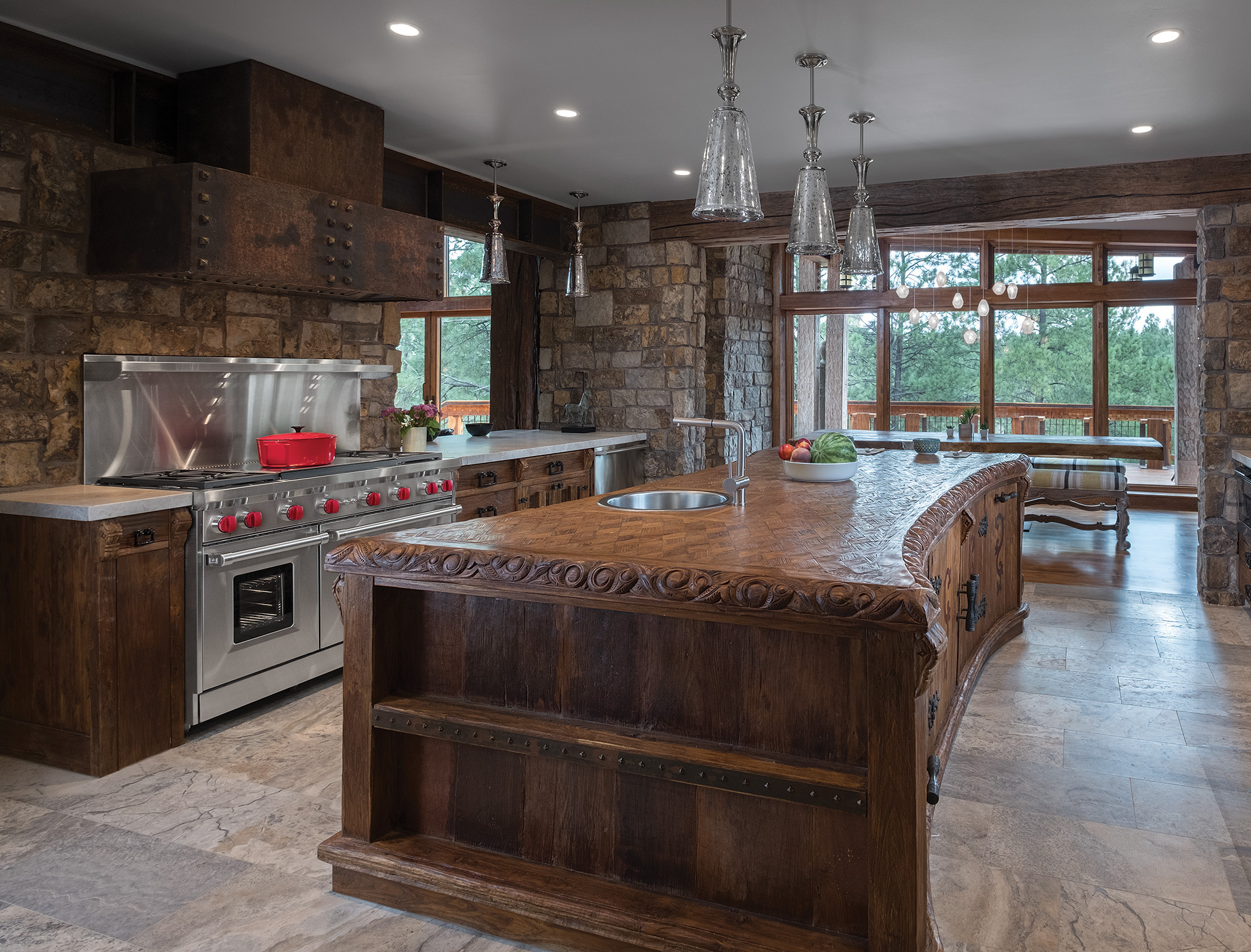 The 10-by-5-foot island is the focal point of the kitchen. Intricately handcarved with a vine-like pattern, this bowed wood surface is topped with diamond wood inlays. The diamond shapes are repeated in the custom nail-heads of the metal range hood. 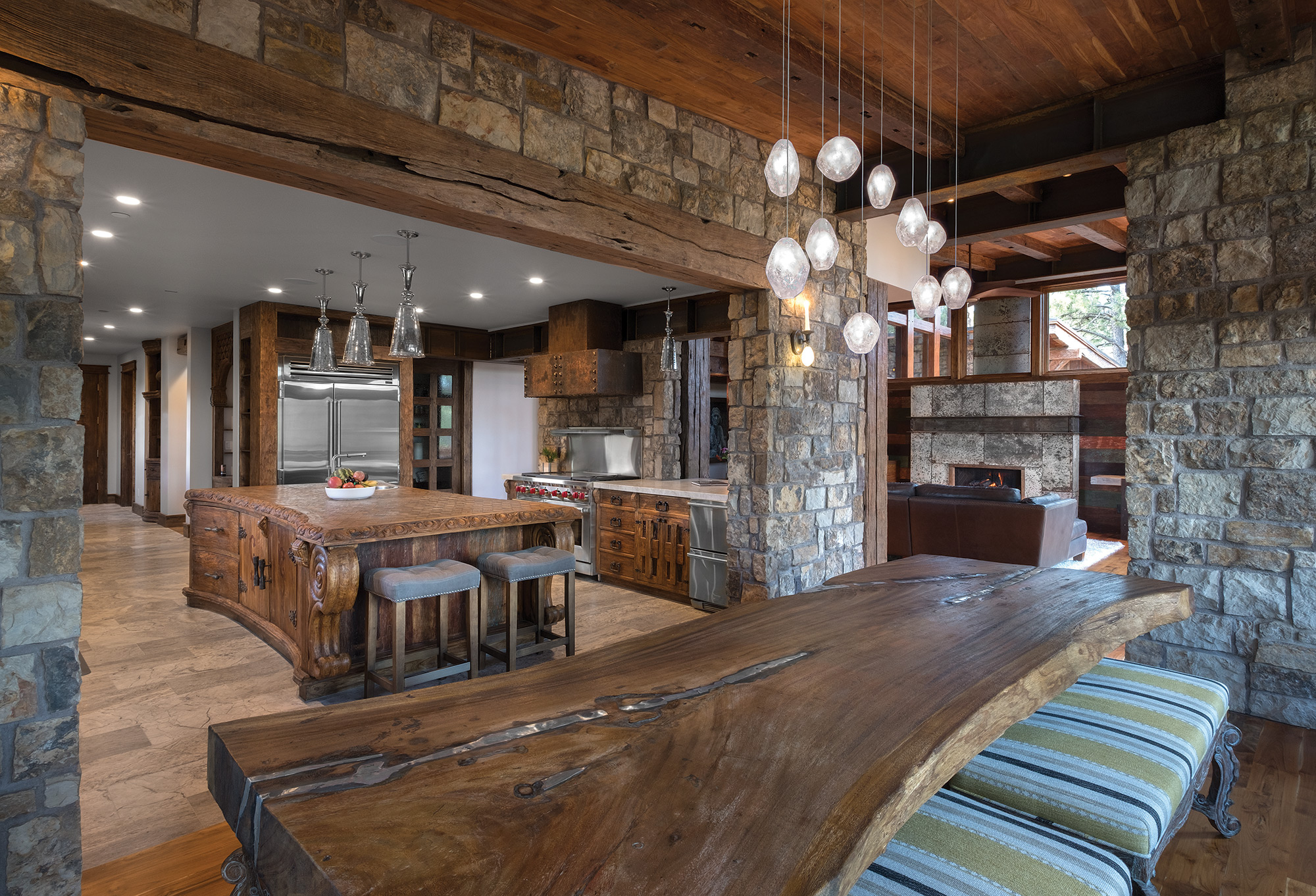 The dining room is designed to maximize outdoor views. The centerpiece is a large, live-edged teak table with a crack filled with melted silver. A chandelier of suspended natural crystals by Fine Art Lamps completes the room.