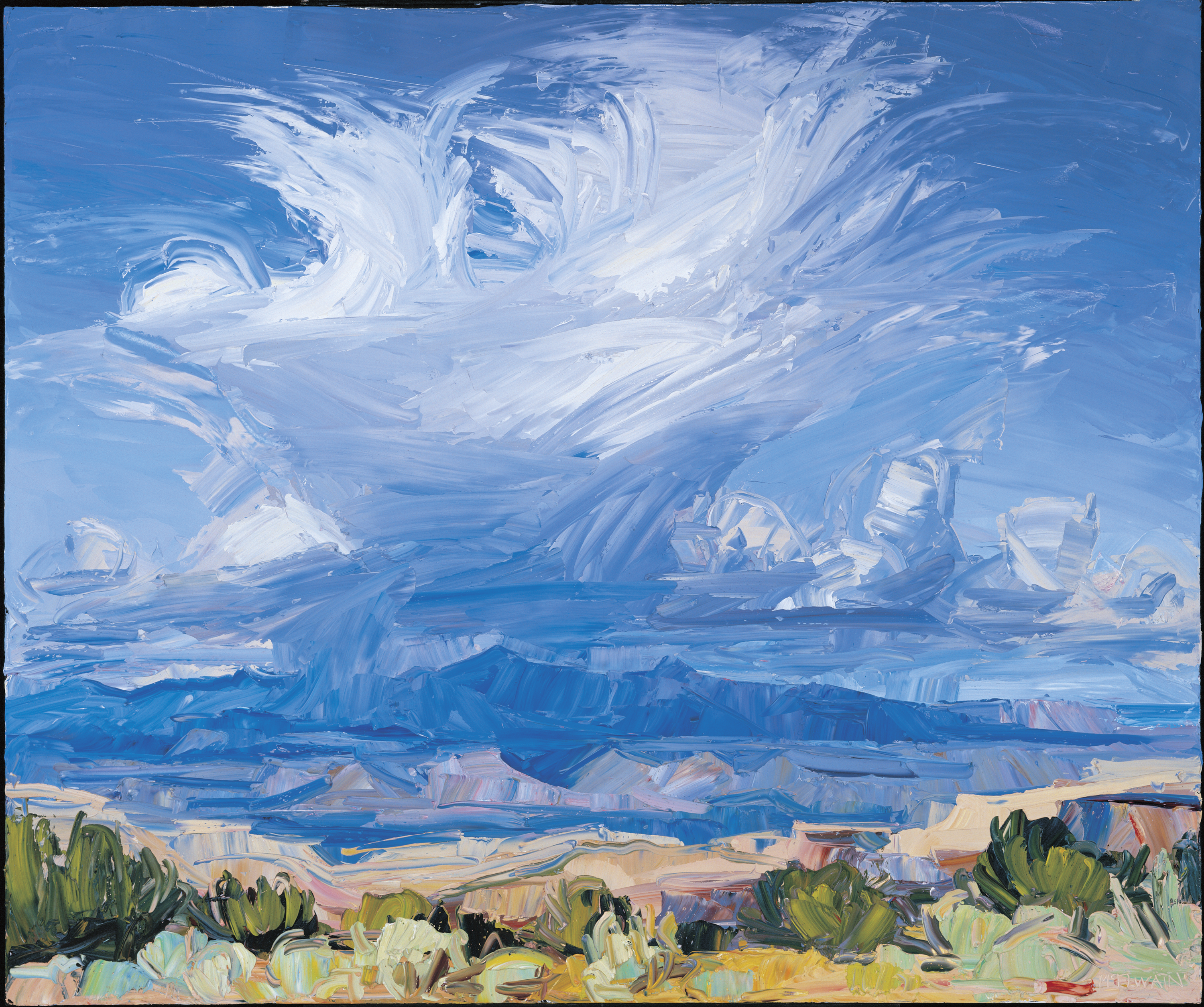 NEW MEXICO PAINTER LOUISA MCELWAIN acknowledges that at least one of her early art professors considered her “unteachable” — but that was because what they wanted to teach was not what she wanted to learn.

In the early 1970s, hip urban Modernism was all the cool rage in the art departments of the East Coast schools McElwain attended. But Louisa, raised in rural New Hampshire with a Romantic soul and willful independence, was never one to follow the crowd. “I decided pretty early on that I was a pop culture wallflower,” the 59-year-old artist says with a grin, settling into a sheepskin-covered chair in the cozy, book-lined living room of her adobe home on a small northern New Mexico farm.

What McElwain wanted to learn — and for which she eventually found instructors and mentors — was how to draw and paint. How, in particular, to capture the beauty of wild nature, which she had grown to love as a child on long woodsy walks with her father and summers at the lakeside cabin built by her great-grandfather, a classical music composer. Conceptual art and Minimalism were light years from her values, her worldview and her artistic ideal.

Initially McElwain enrolled at Hampshire College in Amherst, Massachusetts. But she could not warm up to the flat, cerebral style of Abstract artists such as Ad Reinhardt, whom her painting instructor and classmates idolized. So she left to study drawing for a year in Florence, Italy, under the classical tutelage of an 82-year-old artist. When she returned she was admitted to Philadelphia’s Tyler School of Art. But there, too, instruction in the fundamentals of painting was missing. “They were all mad for white paintings, for black paintings,” she relates with a sigh.

The first place where the artist found landscape painting accepted as a legitimate subject of contemporary art was Skowhegan School of Painting and Sculpture in Maine. There she met fellow student — and her first painting mentor — Dennis Aufiery, whose bold use of color and paint matched her own artistic sensibility. Later, while earning a BFA at the University of Pennsylvania, she soaked up Josef Albers’ theory of the relationship between colors, which continued to underpin her art. Informal instruction with Neil Welliver and master classes some years later with Wolf Kahn at the Santa Fe Art Institute added to a solid foundation in representational art.

Yet something in Abstract Expressionism resonated with McElwain’s artistic principles as well. Stand close to her large, expressive landscapes and you’ll see images composed entirely of energetic, abstract marks. The primacy of the process, of the paint and canvas surface itself, are all legacies of the mid-20th-century New York School. It was a movement that celebrated the visible hand of the artist and eschewed the painted image as a transparent window on the world.

Now watch McElwain paint: She is constantly in motion in front of an enormous canvas attached to supports on the back of her pickup truck. Working as large as 5 by 7 feet, she completes each painting entirely outdoors. She uses no brushes, instead employing palette knives and a homemade, long-handled painting tool: a masonry trowel duct-taped to a stick. She gave up brushes more than 30 years ago when she realized how much faster and more exciting it was to apply paint with a palette knife.

On that afternoon near the Chesapeake Bay, her easel was set up, piles of paint were mixed and ready — and the sun was about to set. “I threw the brushes in the sand and started loading the paint on with a palette knife,” she remembers. “It was so much fun! I love the way the paint slips together, and how you can spread it over other colors and scratch through it. It was much more interesting than a brush.”

Now McElwain stands by her truck-mounted canvas before a sweeping vista in New Mexico, where she settled in 1985. Wind scoots through sagebrush, clouds billow and change overhead; the day’s ephemeral light continually shifts. In response, the artist’s expansive gestures echo the physicality of the “action painters,” Abstract Expressionists like Jackson Pollock, Willem de Kooning and Franz Kline.

For McElwain, painting is a real-time dance to the rhythms of nature, with all its beauty and capriciousness. It is why she calls herself not a plein air painter, but an Abstract artist who paints nature outside. “It’s so energizing, so stimulating to be out there because it’s actually a giant conversation with nature, rather than talking to oneself in the studio,” she says.

Lately the conversation has become more intimate and profound. Two years ago McElwain made a commitment to the Christian faith. Since then her paintings’ titles have begun to reflect a sense of ever-deepening connection with the sacredness of creation and a reverence for spirit as reflected in the land. Be Thou My Strong Habitation is a winter scene with mountains, mesas and an oxbow curve in the Chama River, a view McElwain has painted on many occasions but experiences anew each time.

Another landscape the artist knows well features Pedernal, the iconic flat-topped hill of Georgia O’Keeffe fame. In O Prima Vox, storm clouds gather over Pedernal and nearby Abiquiu Lake. On days such as this, tiny bits of dirt, grass, insects and other traces of nature may find their way into the canvas’s wet paint. McElwain often leaves them there, reminders of a direct link between the land, weather, her experience of painting and ultimately the viewer, whose response adds another dimension to the work.

“A McElwain canvas brings energy through paint movement, which resonates harmoniously with the viewer,” notes Mark Sublette, owner of Medicine Man Gallery in Tucson, Arizona, and Santa Fe. “It is this vibrancy of paint, laid down in thick layers, which will keep this artist in demand for many generations to come.”

While mid-20th-century Abstract Expressionists reveled in their emancipation from depicting the external world, McElwain is more than happy to look around and paint what she sees. “I feel God gave me eyes to behold His glory,” she reflects. “I find it infinitely fascinating to meet the challenge of exploring and expressing what is true about my experience of God’s creation.” 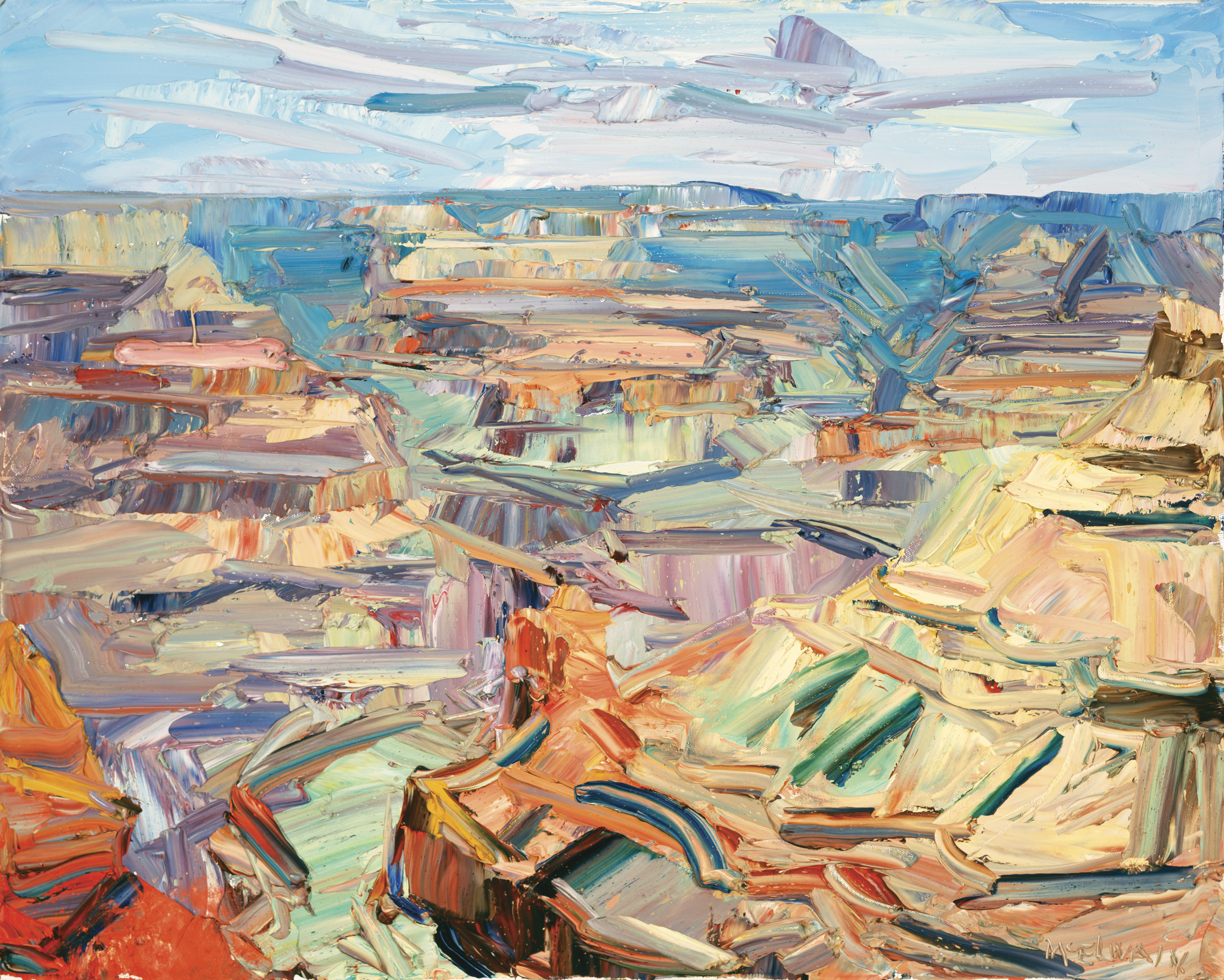 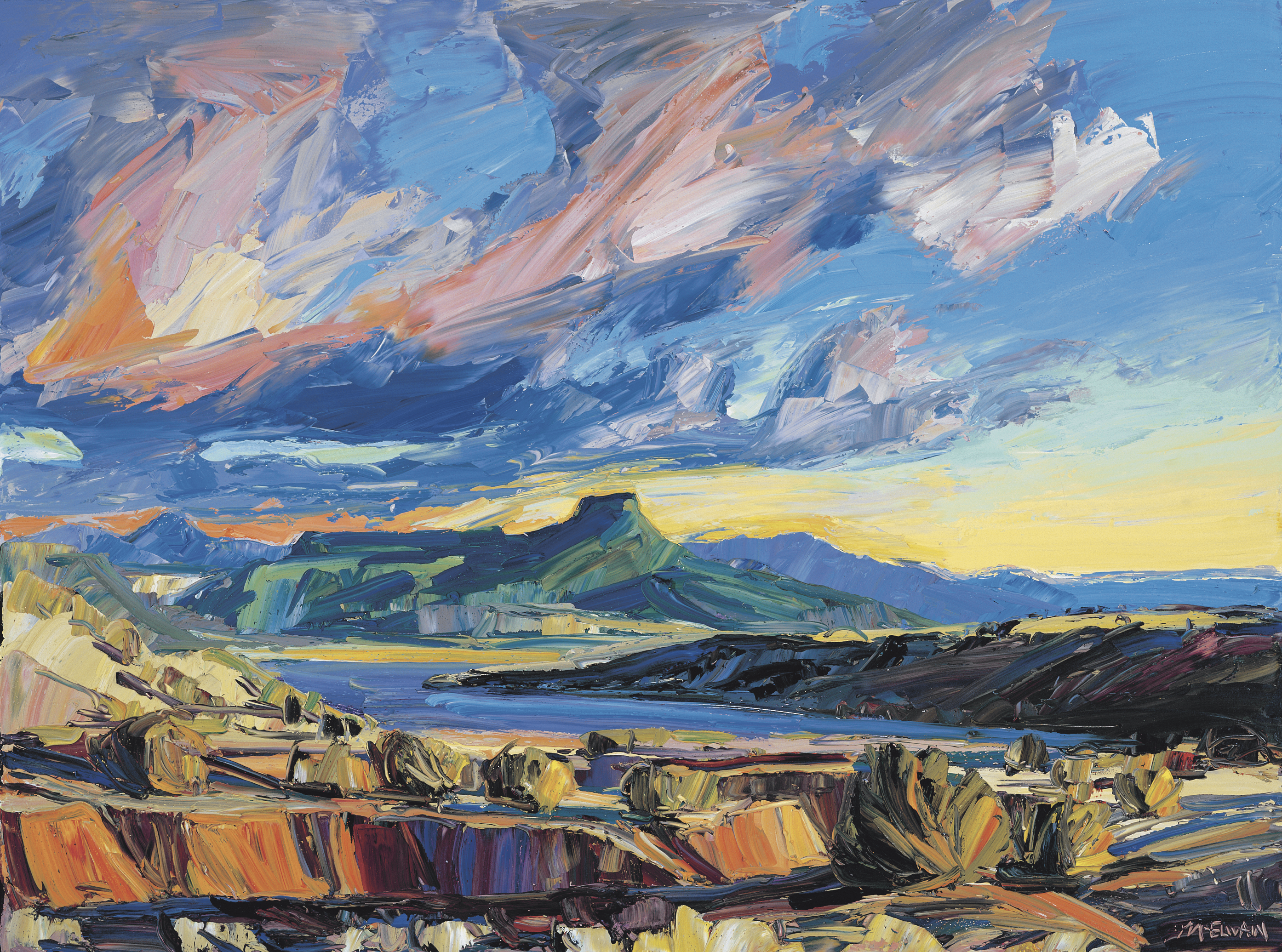 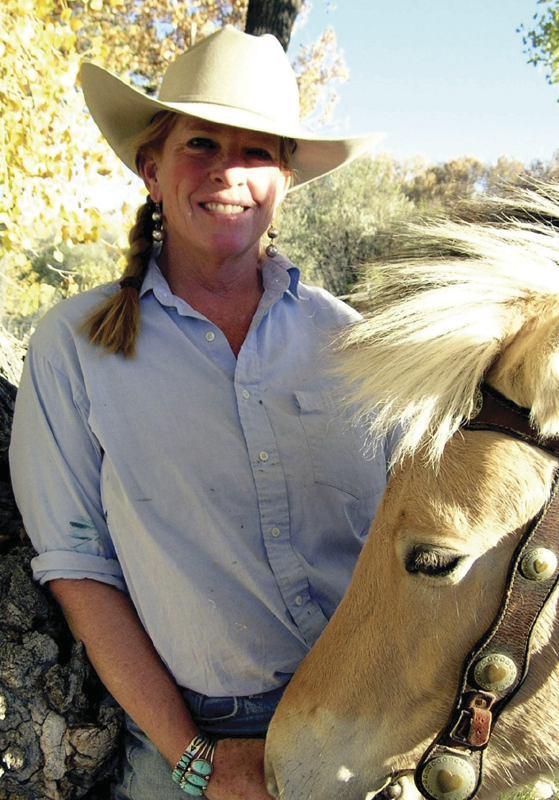 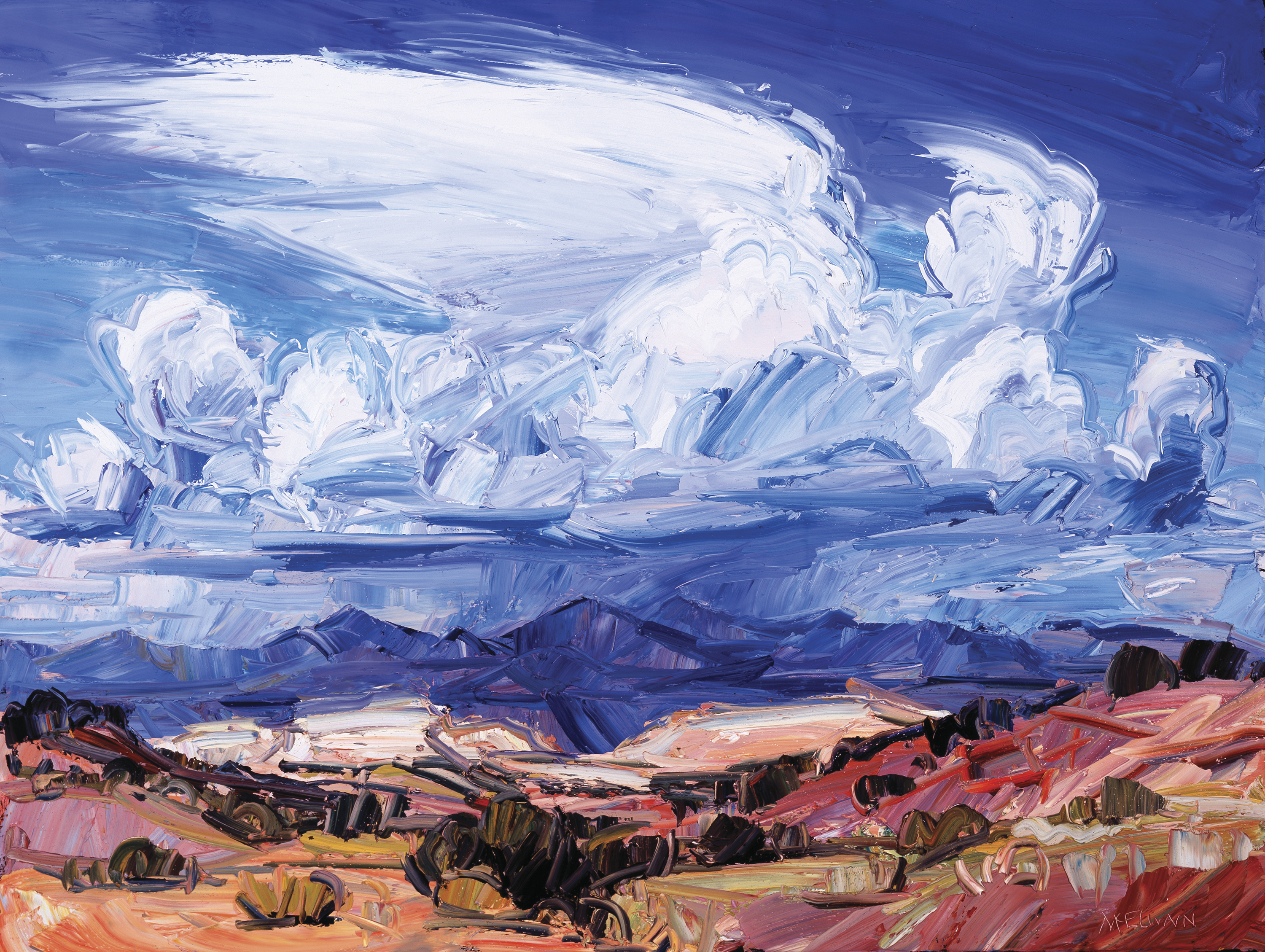 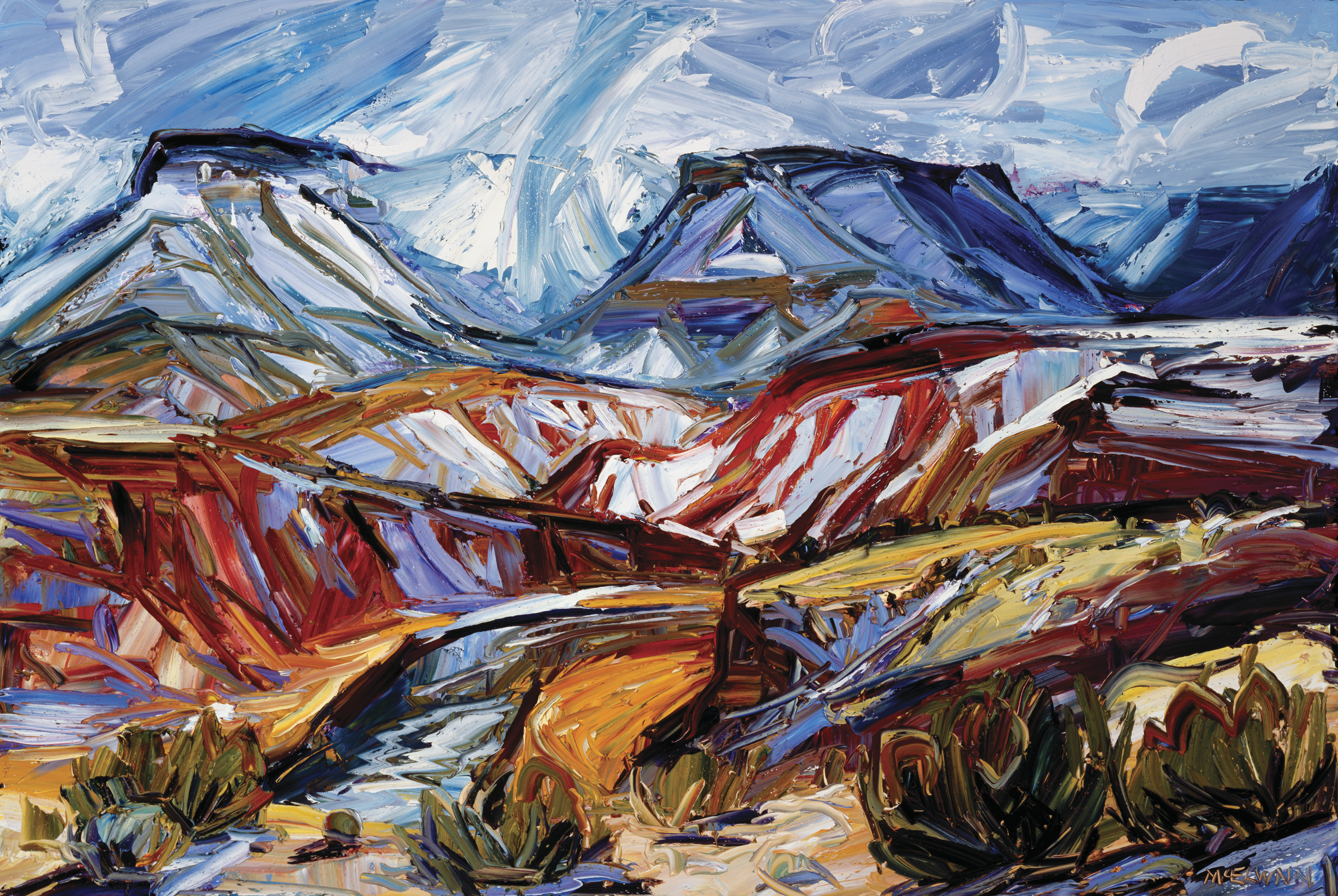