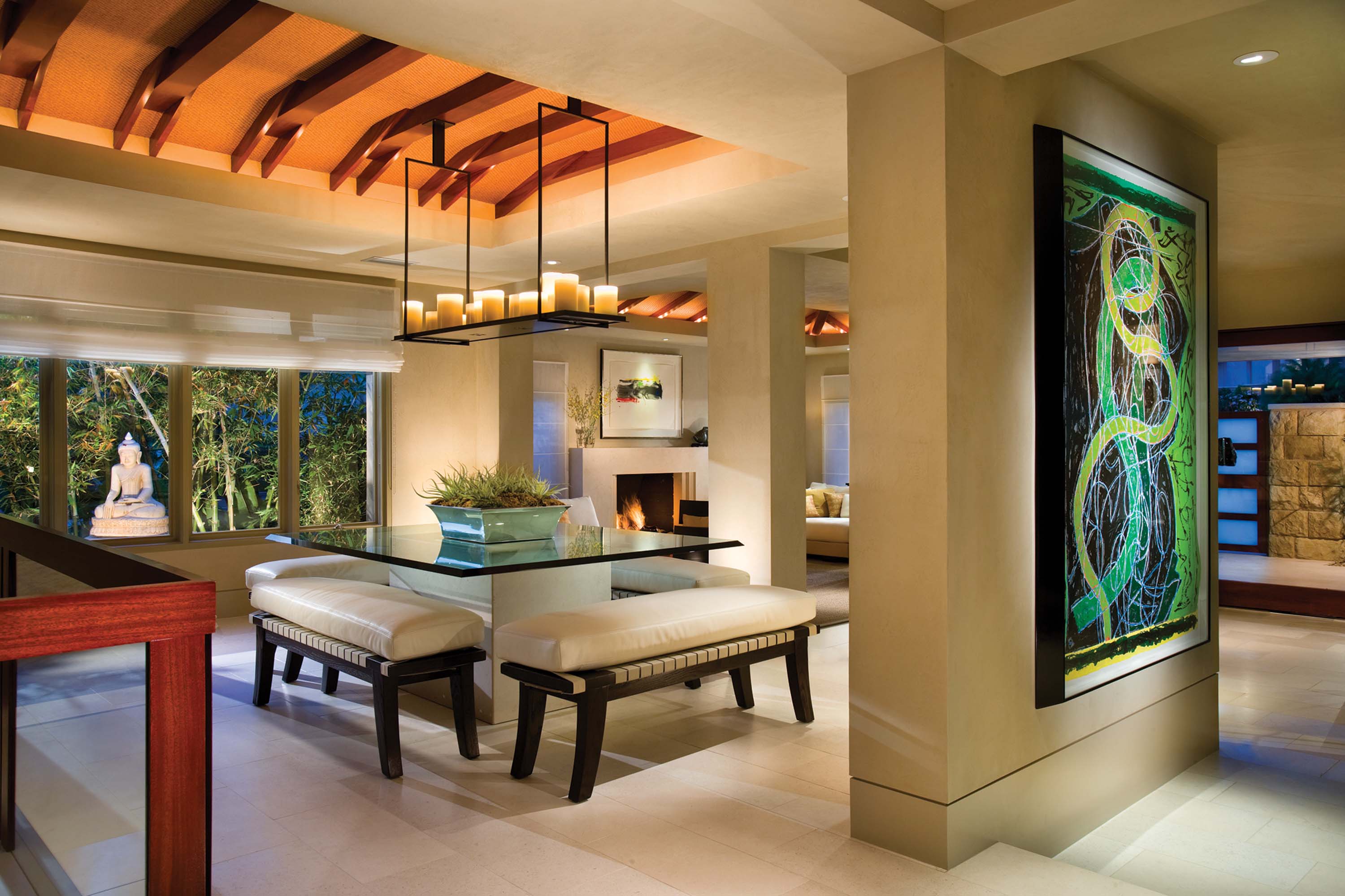 01 Feb From the Ashes

“IT'S NOT LIKE IT'S A FANCY PLACE,” Toni Alexander says of her home in Irvine Cove at the northern end of Laguna Beach. “It’s a place where people just want to take their shoes off. I want them to walk in the big pivot doorway and say, ‘Oh, it feels so good.’”

In fact, the sprawling 5,800-square-foot house is a striking blend of casual California beach style, the serenity and elegance of Bali and a backdrop for Alexander’s ever-growing collection of art. A substantial fire in 2005 led to this transformation of what Alexander describes as having been a “pretty ordinary contemporary ranch house.”

Designer Kit Lietzow has known Alexander for 20 years. “Toni’s a distinct personality,” he says. “The clean, serene environment with crisp lines is who she is, but there’s also a soft, feminine side.”

Alexander brought him pictures she’d torn from magazines. Aside from a new love affair with Bali, Alexander was inspired by Christian Liaigre’s furniture designs. “Kit’s got an incredible eye for color,” Alexander says. “He just was reading me. I said, ‘Let’s make this house as artistic as the art that lives in it.’ He took all this and blended it into this wonderful brew, without letting the interiors overwhelm the art.”

And, she points out, for most people a beach house is a second house. But this is her home.

Architect Carlton Graham and Lietzow were restricted by the volume and roof pitch of the original structure, so the exterior changes are largely cosmetic and the major transformations were interior. The entrance is clad in fauxstone, with a small privacy panel before the walkway to the door. The inspiration is less traditional Balinese home — walled compounds with a series of separate structures — and more the airy five-star resort reinterpretation with plate-glass windows opening onto stunning ocean views, as well as pocket gardens, one with a massive floodlit Buddha. Lietzow’s love for Japanese architecture is evident in the large, austere dark wood doors with frosted panes. In Bali, the doors would have been solid wood with every inch carved.

To accommodate the art collection, doors were opened up, creating passageways that give the rooms the feel of Balinese pavilions. At the same time, Lietzow explains, there had to be strategically placed large walls for the art. L-shaped passages became an impressive gallery. “Toni was so excited she started looking at more art,” Lietzow laughs.

Portuguese limestone floors mirror sand. Ceilings are lined in woven paper that contrasts with walnut-stained beams that resemble the dark woods of Bali. The walls are Venetian plaster mixed with marble dust. “It gives them a subtly worn feeling,” Lietzow says, “with warmth and softness, but the freshness of the beach. There’s slab lime-stone here and there, around the fireplaces, in the living room, the master bedroom and in the theater.” The master bathroom’s walls are uneven rectangles of Europa lime-stone that were hand cut into 2-inch-tall strips that are at once rough and crisply cut, and the elegant oblong bowl of a bathtub is lined in wood panels with frosted panes that echo the doorways. Lietzow didn’t want the same level of contrast in the kitchen, so he clad the dark wood islands and counters in brushed black granite from Zimbabwe. “Brushing gave it the texture of black sand beaches,” he says.

“I didn’t try to be too accurate with the Balinese influence,” he adds. “It can all be changed. Ten years from now, she’s going to land on another island, and fall in love with that.”

One of the first pieces people see in the house is a massive print of a ’60s photograph by the late actor and artist (and friend), Dennis Hopper, of a group leaping on the Malibu Beach — very Bill King — including Toni Basil and Teri Garr. Alexander has work by Ed Ruscha, Peter Alexander and other seminal Los Angeles artists, including transplants like David Hockney.

“I wanted to have artists in my life,” she says. “And I was attracted to artists who were into the beach-surf-pop culture.”

The house is also filled with hand-crafted art she’s picked up on her world travels, including some gorgeous wood sculptures from Bali. When she’s not traveling, Alexander continues to roam the art galleries. “An art collection is a journey,” she says, “not a destination.”

But her home is a haven she’s always reluctant to leave. “I’ve been all over the world,” she laughs. “But I would never live anywhere but Laguna Beach, and never anywhere but Irvine Cove.” 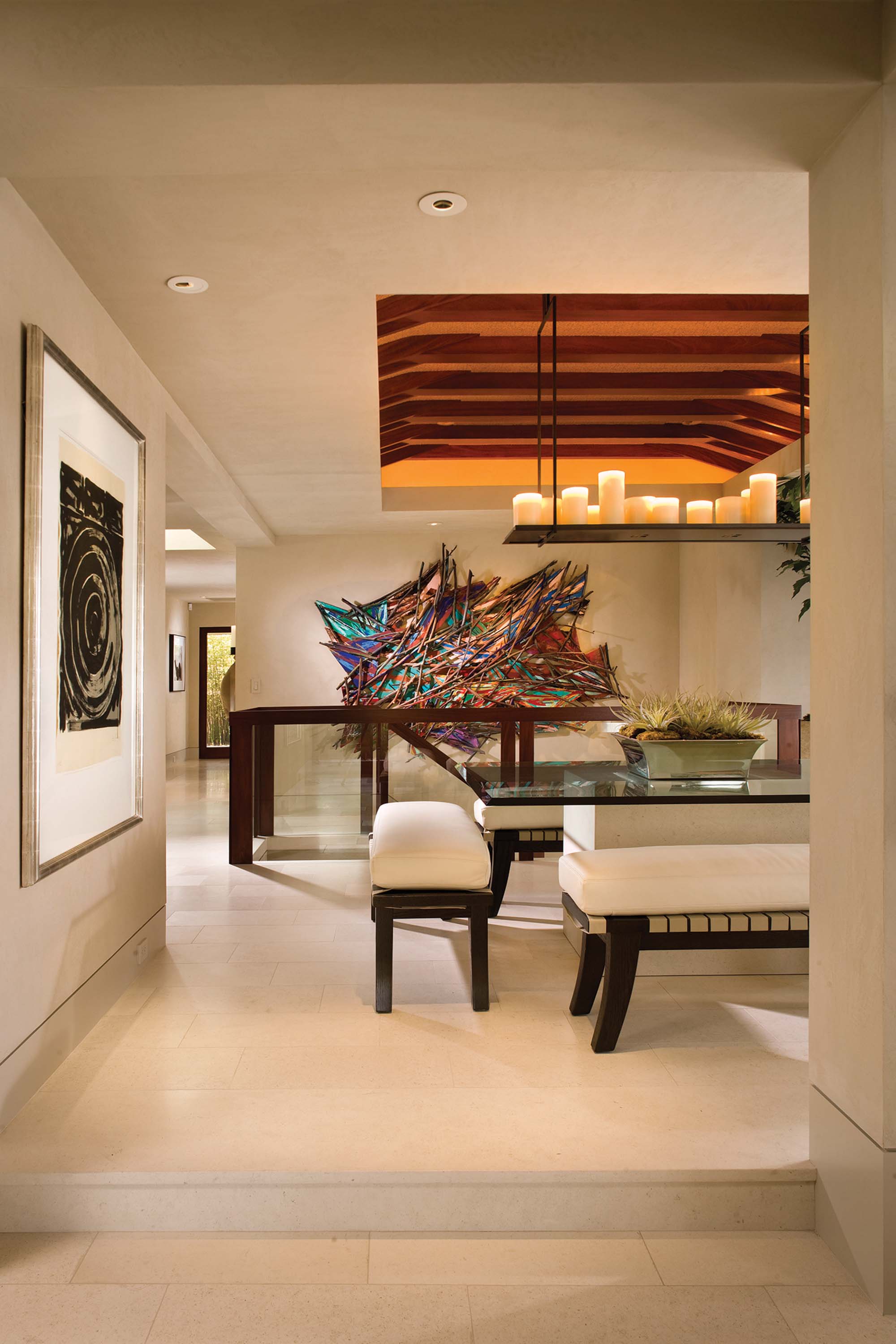 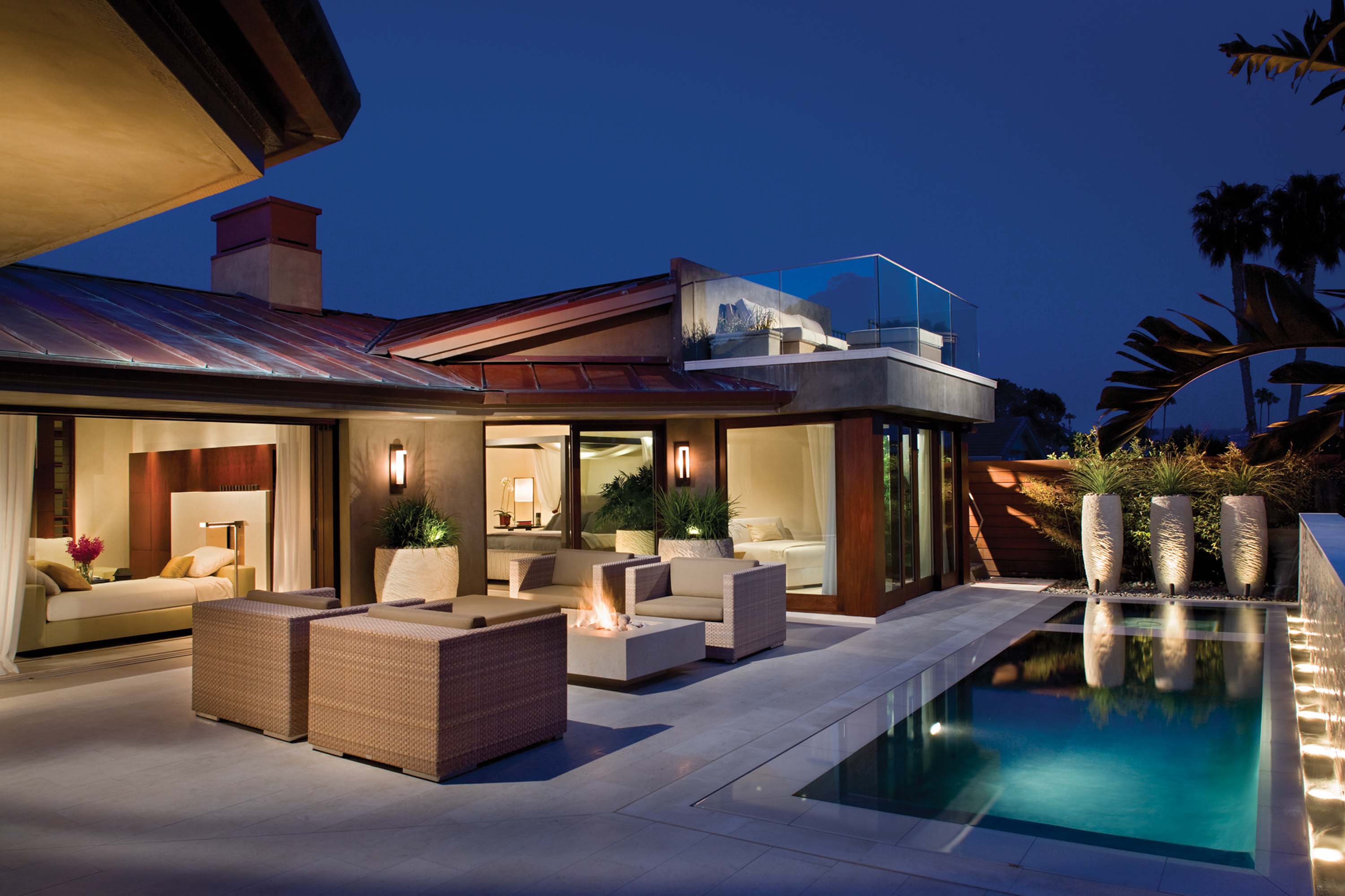 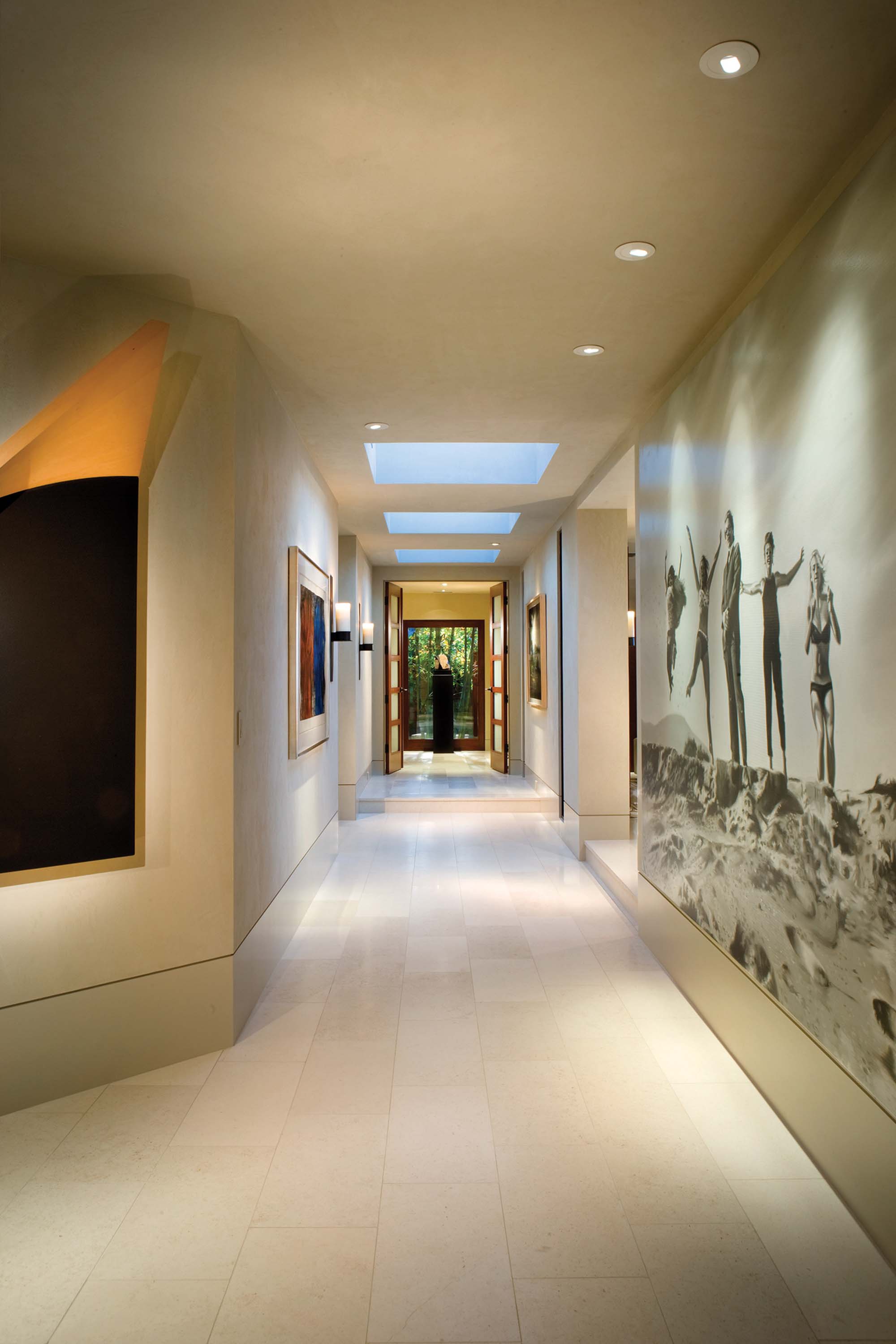 The large photograph by the late actor and artist Dennis Hopper (foreground) has pride of place, but Alexander’s collection continues to grow and change. 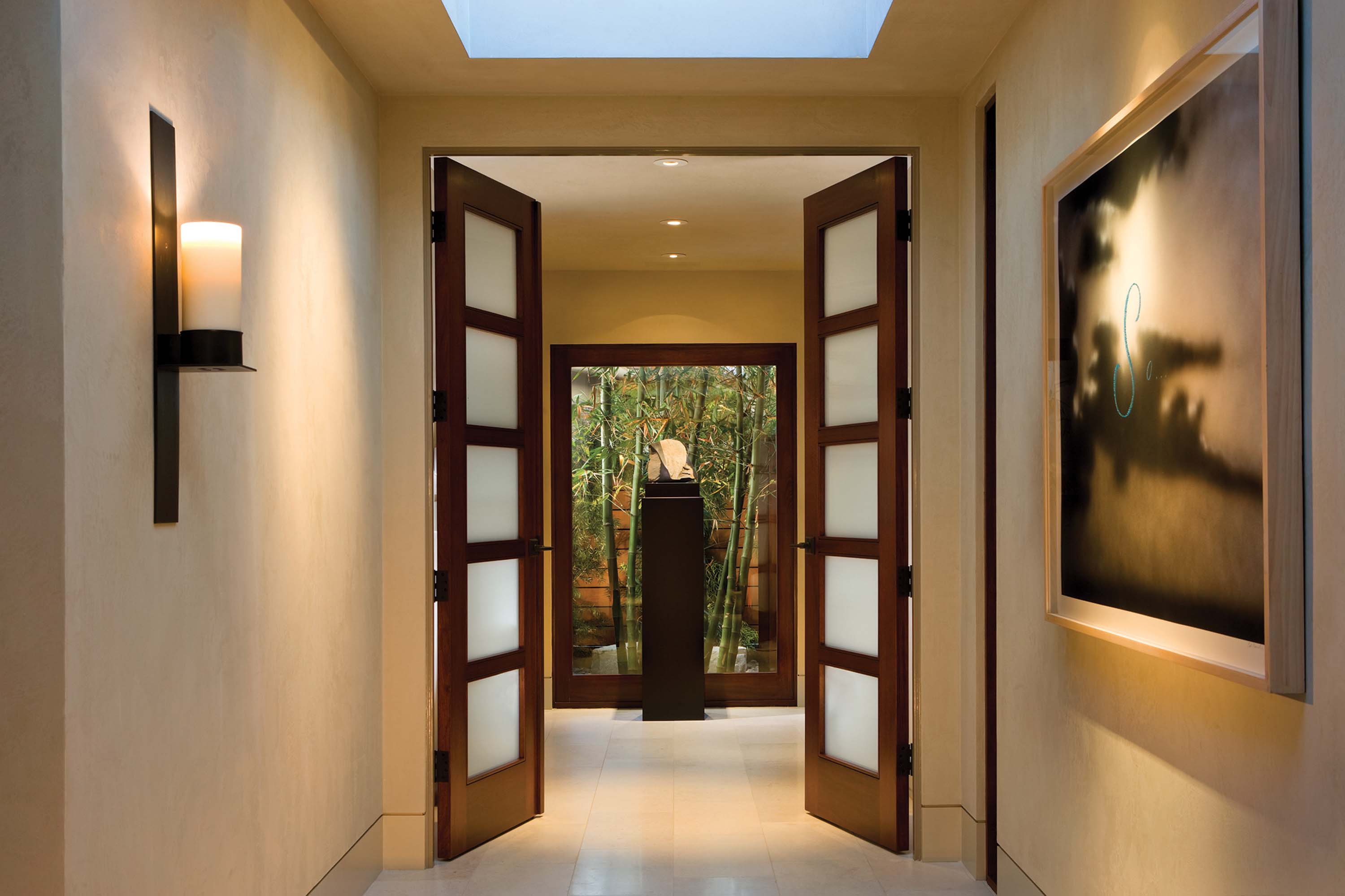 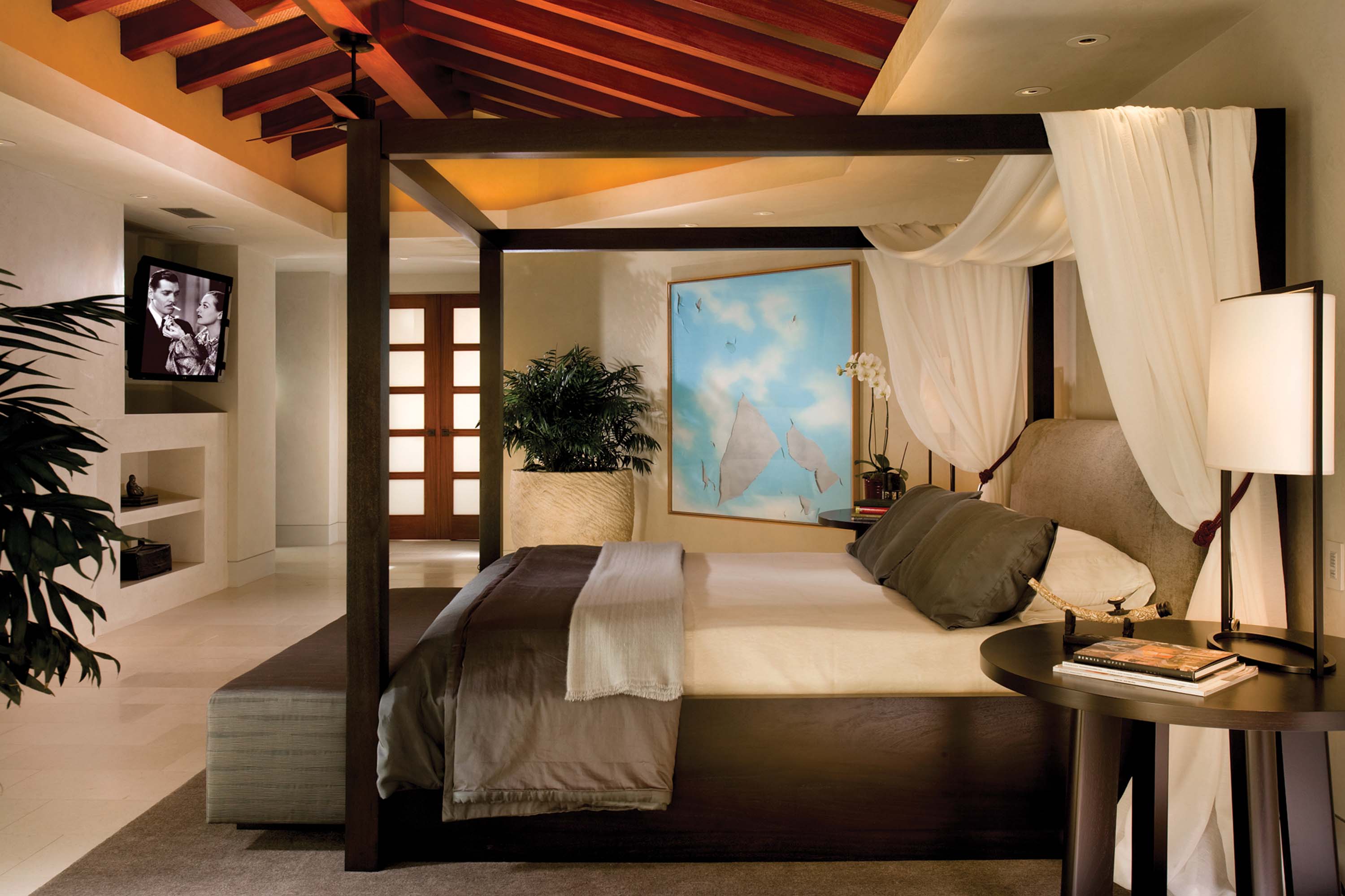 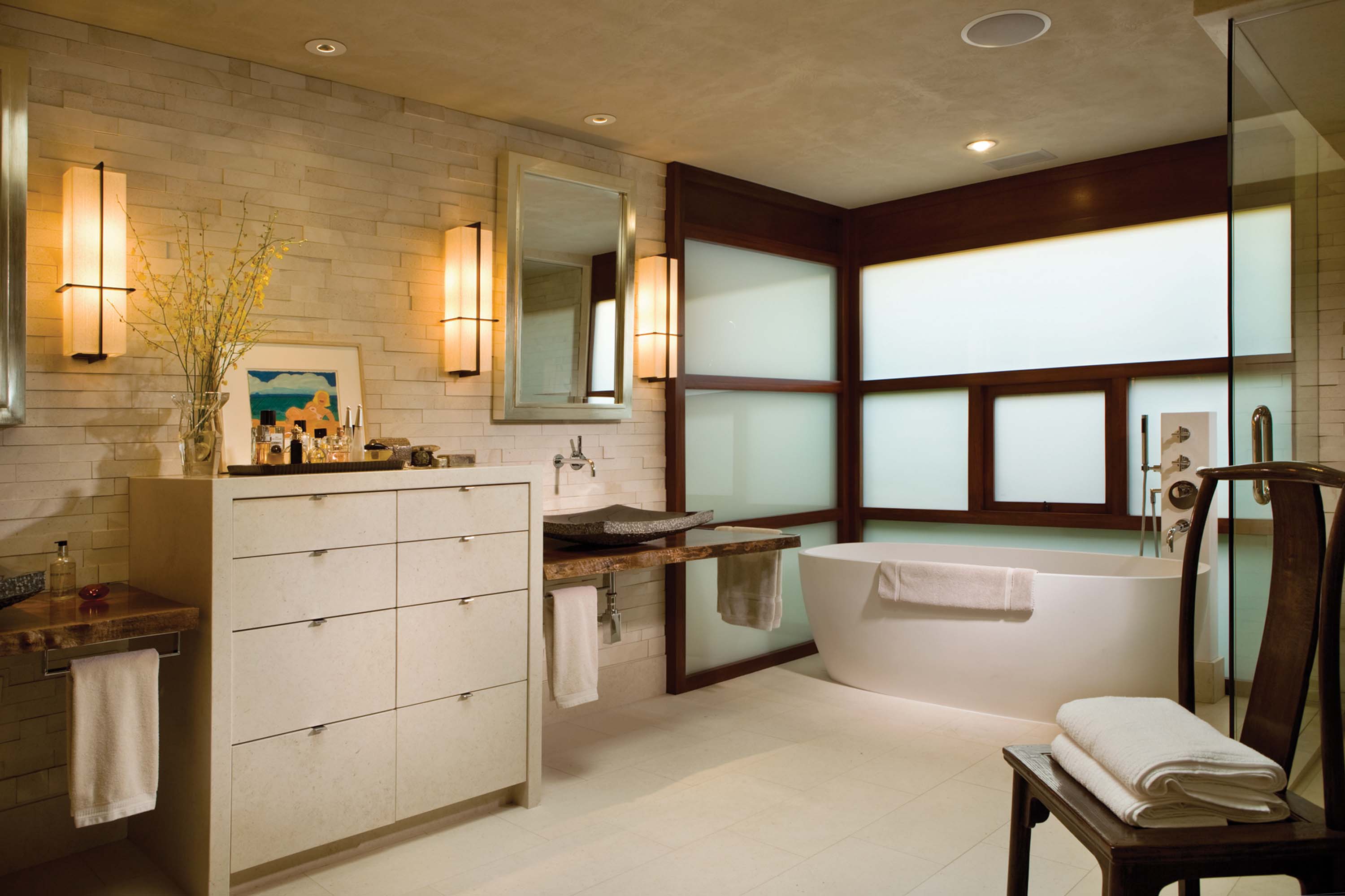 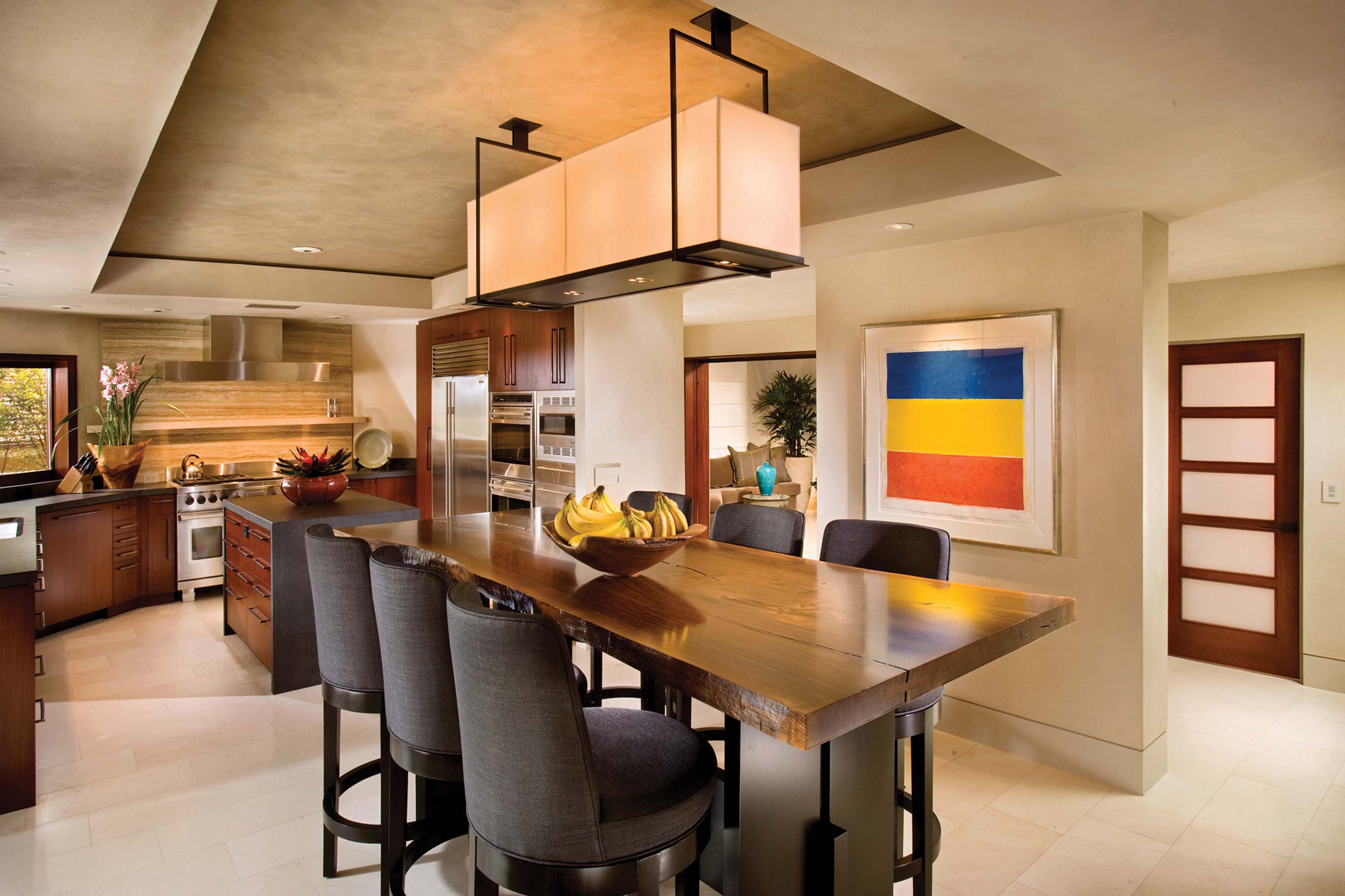 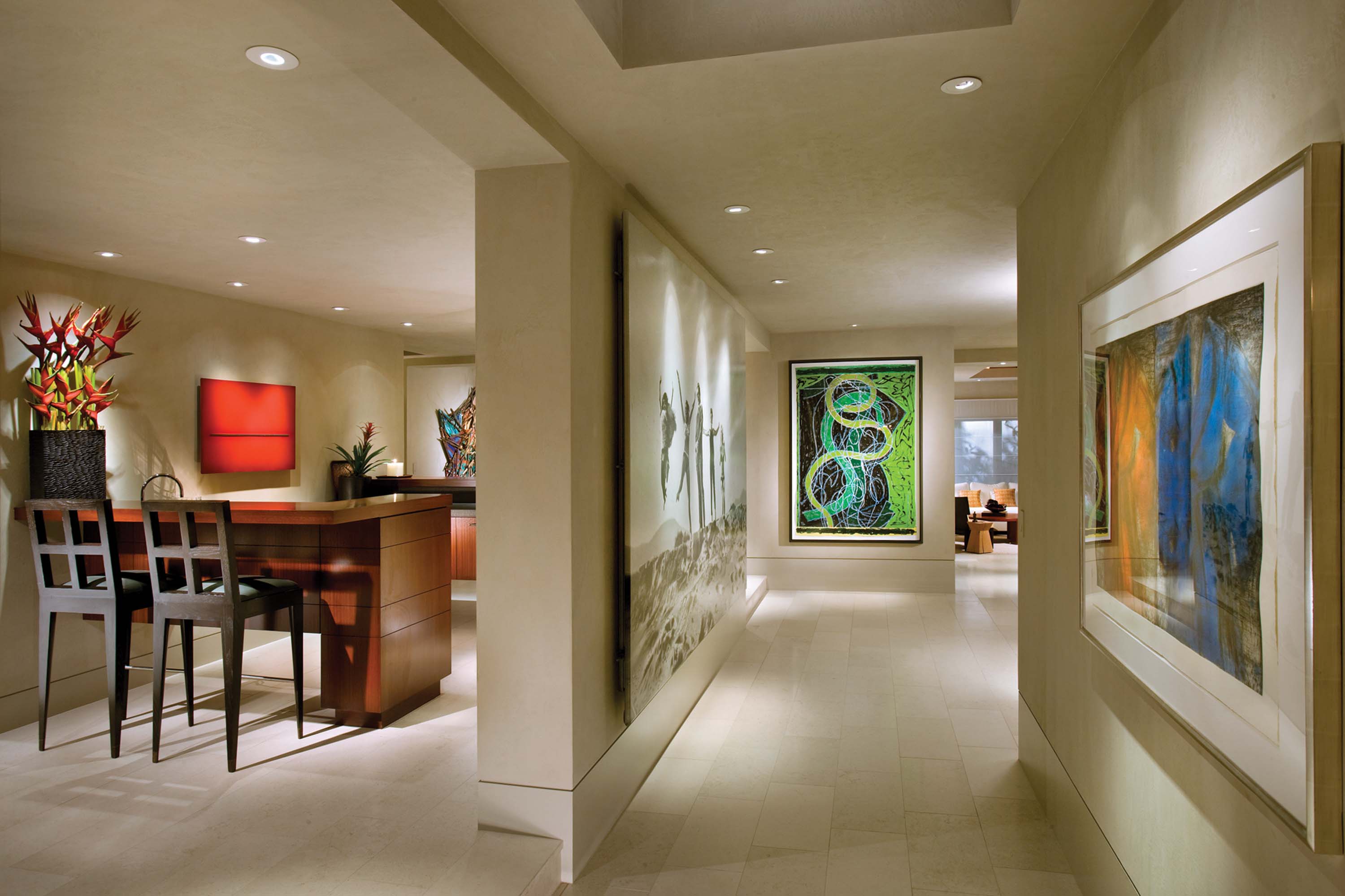