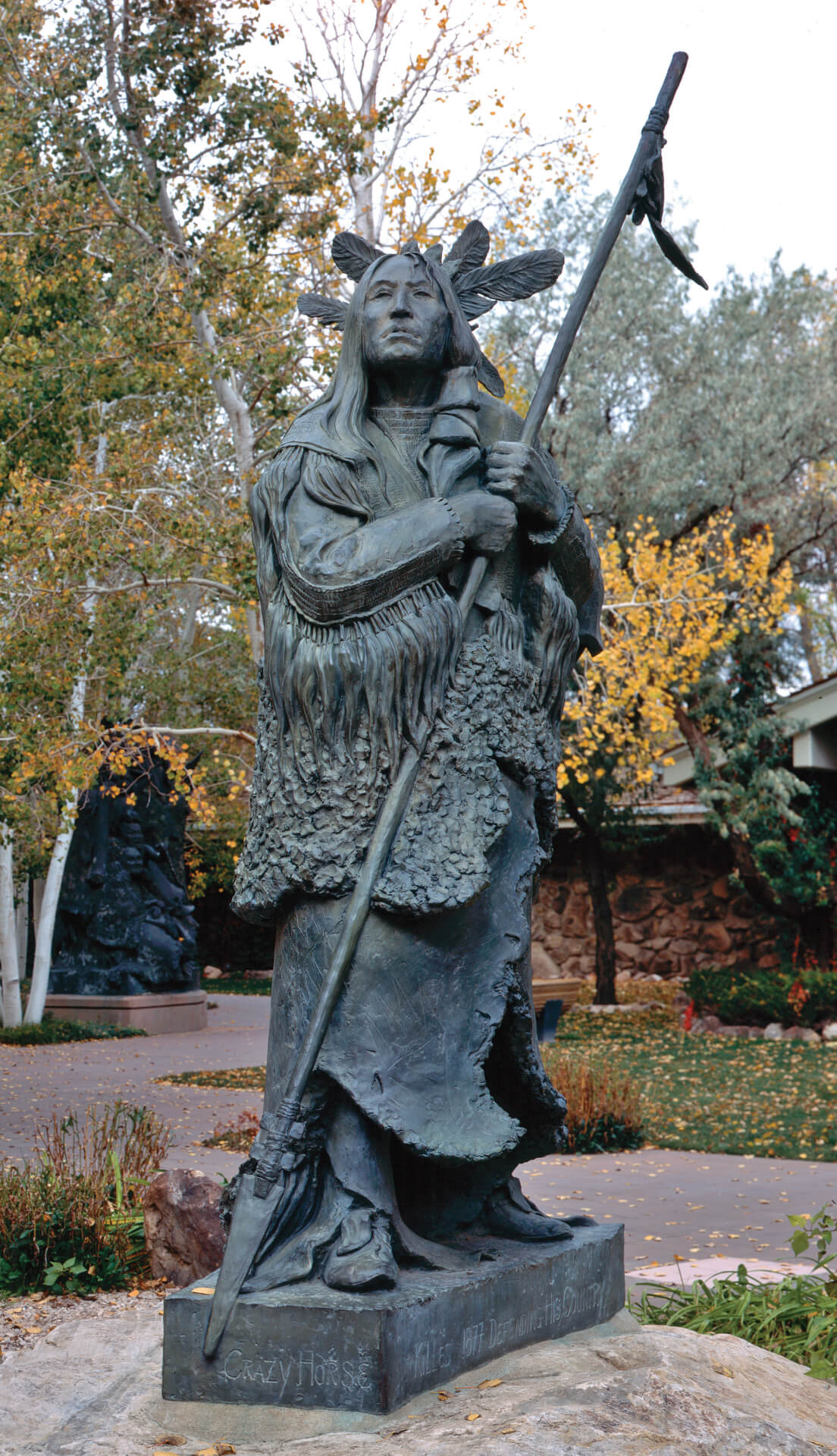 05 May From the Journals: Corps of Discovery Moments Brought to Life

In his bronze sculpture Cheyenne Man, Richard Greeves lets his figure’s eyes say what Lieutenant William Clark did not include in his journal entry for December 2, 1804, when four Cheyenne men came to the explorer’s camp on the Missouri River holding a pipe. In Greeves’ piece, the man’s eyes are open just enough to show wariness mixed with curiosity. Hair loose around his shoulders, scarf around his neck, a single feather rising from the back of his head, and a bird are other details Greeves incorporates to reveal the Native Americans’ side of the encounter.

Cheyenne Man is one of 56 moments Greeves has brought to life in bronze from Lewis and Clark’s journals. The whole collection is on display through September 30 at the Woolaroc Museum & Wildlife Preserve in Bartlesville, Oklahoma. 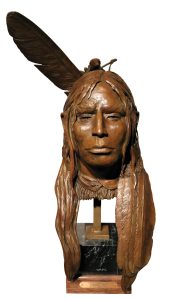 If he could, Greeves would travel back in time to accompany Lewis and Clark through the unexplored American West, such is his fascination for the period and subject. But given the limits of such an opportunity, he’s settled for retracing the path of the expedition and living on Wyoming’s vast Wind River Reservation, where Eastern Shoshone and Northern Arapaho are neighbors and friends who serve as models when needed.

The acclaimed sculptor has been interpreting Lewis and Clark’s journals from the Native American perspective since he first began drawing and building things in his youth. The Corps of Discovery would not have been possible without the contributions of many different Native American nations, who kept the expedition from starvation and getting lost, and offered shelter from harsh winter conditions. As the expedition’s bicentennial approached, Greeves thought his sculpting skills and knowledge of tribal dress had developed to the point that he could take his artistry to a new level. “I started a little bit earlier than the bicentennial, and now there are 56 pieces that go all the way from when they were camped in Illinois the year before they left, until when they got back,” he says. “The journals were my bible for that.” 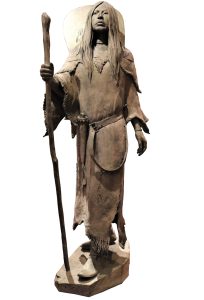 Last August, the Gerald Peters Gallery in Sante Fe, New Mexico, staged a solo exhibition of all 56 pieces in a show entitled Richard V. Greeves: Lewis & Clark Corps of Discovery 1804 – 1806: The Native Peoples Lewis and Clark Encountered on their Epic Journey. Afterward, rather than return the work to storage, the gallery director encouraged the artist to find another venue for the sculptures. So Greeves reached out to his friend Dean Zervas, a collector and trustee at the Woolaroc, and arrangements were made to bring the exhibit to Oklahoma.

“Richard has such a depth of knowledge of anatomy and Native American culture, and he’s able to meld it all into a realism that’s authentic,” says Zervas, who became friends with Greeves in 2013 when the Woolaroc mounted its first national show, Lewis and Clark, Corps of Discovery. It was a shared exhibit of Greeves’ sculptures and Charles Fritz’s Lewis and Clark paintings. But this year’s exhibit at the Woolaroc is all Greeves, thanks to the support of the Gerald Peters Gallery and Zervas’ work as an intermediary.

“We were looking for an art show to build the gallery for this year, and Richard was a natural choice for us,” says Shiloh Thurman, the Woolaroc’s director. The museum has acquired two of Greeves’ works for their permanent collection, most notably Bird Woman. The 5.5-foot bronze statue is of Sacagawea, a young Shoshone woman who traveled with Lewis and Clark and often served as an interpreter. 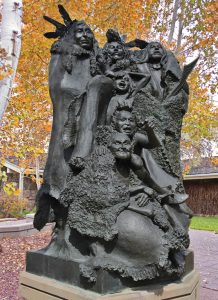 The Unknown | Bronze | 1985 | Courtesy of Buffalo Bill Center of the West, Cody, Wyoming; |
Whitney Western Art Museum; Gift of Marjorie May Braun through the Braun Foundation; 69.86.

Greeves grew up in St. Louis, Missouri, in a close-knit neighborhood of Italian immigrants — many of whom were his relatives — known as The Hill. His ancestors were Venetian marble cutters, mosaic artists, and ornamental plaster workers. He jokes about having started drawing while still in his mother’s womb because his younger sister saw sketches he left on the walls. At 10, he built himself a bike and took off for Forest Park, where the Missouri Historical Society has the nation’s largest collection of Lewis and Clark Corps of Discovery artifacts. It became his second home. Museum staff grew so fond of him that they gave him jobs, which meant he got to rifle through drawers and turn things over in his hand.

“The only place I could sit down and draw was Clark’s desk,” Greeves recalls.
The direct and early exposure set his imagination on fire and prepared him for a lifetime of engagement with Native American history and culture. A chance encounter with a Shoshone woman when he was 15 led to an invite to the Wind River Reservation, where her family ran cattle. 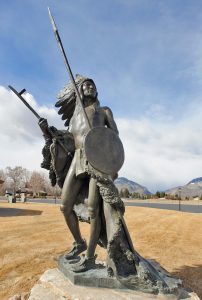 Washakie – Chief of the Shoshone| Bronze | 2000 | Courtesy of Buffalo Bill Center of the West, Cody, Wyoming; | Whitney Western Art Museum; Gift of Mike and Kris Kammerer/Code of the West Foundation; 7.00.2.

“Hell, I wasn’t there 20 minutes, and I was riding across the prairie with a bunch of boys my age. And I knew this is what I’d been made for,” Greeves says.

He left at the end of summer but returned in his mid-20s for good. He’s lived alongside the Eastern Shoshone and Northern Arapaho people ever since. “When I look back on it now, somebody had mapped me out a course, because everything fed into everything,” Greeves says about his life. “It just seemed everything came along at the right time.”

At 87, Greeves’ place in the pantheon of Western artists is secure. He received a Lifetime Achievement Award from the Autry Museum of the American West in 2006. And three of his monuments are on permanent display at the Buffalo Bill Center of the West: Crazy Horse; Washakie: Chief of the Shoshone; and The Unknown. The latter, which was commissioned for the Buffalo Bill Center, details humans at the dawn of time staring into the uncertain future. 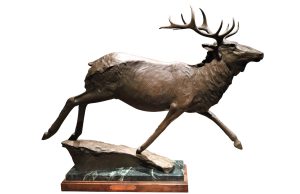 Greeves has won five Prix de West awards from the National Cowboy & Western Heritage Museum, including the 2000 James Earl Fraser award for Washakie: Chief of the Shoshone. In that piece, Chief Washakie holds a peace pipe in one hand and a shield in the other. With his shoulders back and chest lifted, the chief is the epitome of relaxed pride. And Greeves’ fascination for the Lewis and Clark expedition, and depicting it from the perspective of the Native Americans that they met along the way, is as keen as ever.

“That’s kind of an interesting thing,” Greeves says, “that it’s always been looked at as a white man crossing the country, and not what the Indians contributed to it.”

His work offers a fresh visual perspective into Lewis and Clark’s great expedition, calling awareness to the Indigenous people directly responsible for and impacted by this pivotal period in American history.