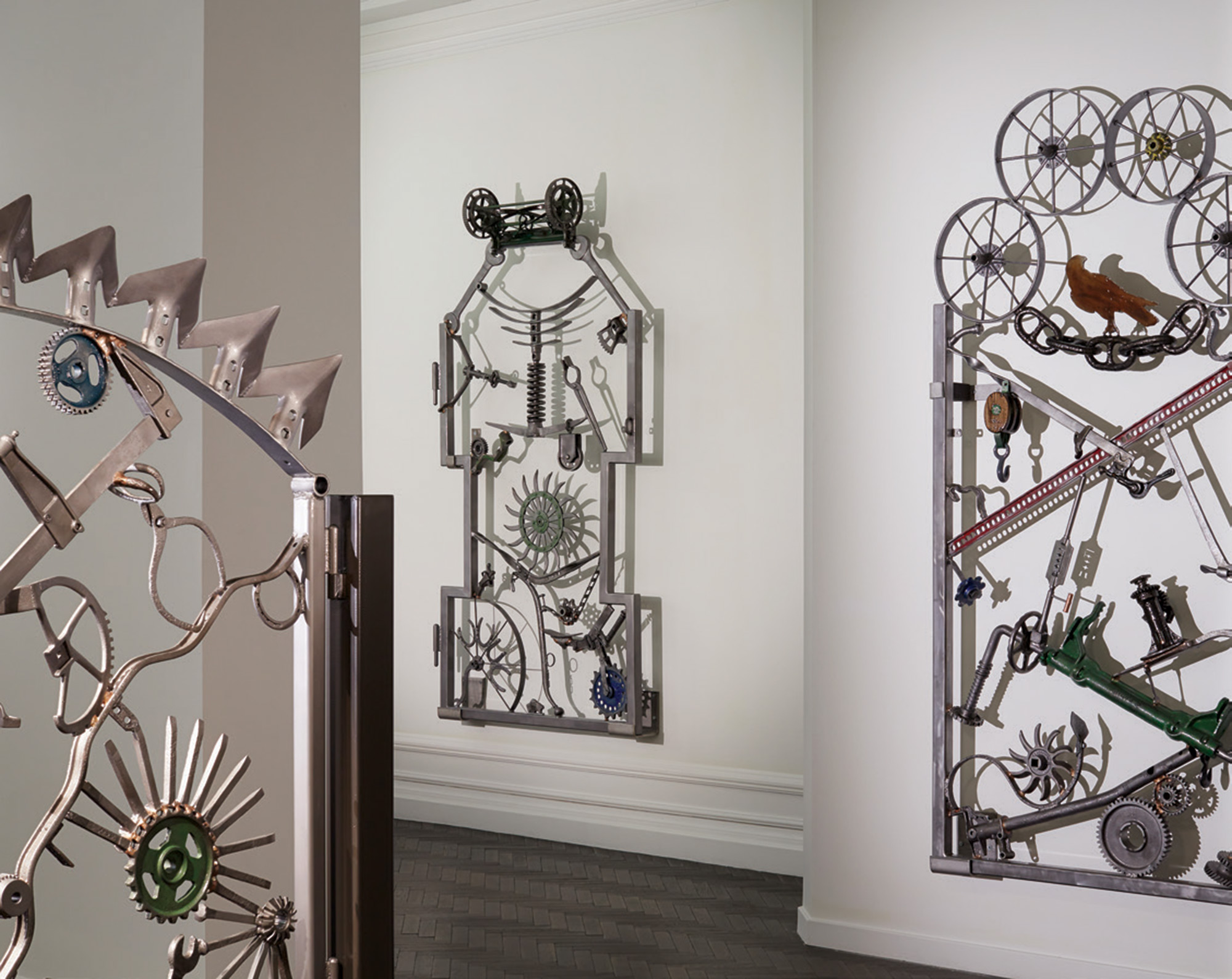 THE GATES SWING OPEN. One passes through and it’s as if a hail of discarded ranch tools and auto parts fill the air: a sawtooth blade, a cast-iron meat grinder, a draft horse hame, leaf and coil springs, an auger, elongated drill bits and picket pins, open-end wrenches, gears, horseshoes, pliers, thick chains, railroad spikes and, almost as afterthoughts, a pair of treble clefs and a guitar. At one gate’s bottom is a tiny bison, beneath which is written, “Black Buffalo Ironworks, Bob Dylan.”

These gates, Untitled II, are a pair exhibited with six other pieces of Dylan’s iron sculptures, displayed in 2013 and 2014 at London’s Halcyon Gallery, where a new show of Dylan’s art will open next fall. The songwriter has sketched and painted for decades, and has exhibited his paintings at the prestigious Gagosian Gallery in New York and in continental Europe. But Mood Swings, last year’s exhibit at Halcyon — of his gates, a railing and window screens — was the first public showing of Dylan’s efforts in metal.

As with the junkyard assemblages of Robert Rauschenberg, the black-and-white art films of David Lynch, the mixed-media constructions of Red Grooms, and like Dylan’s most surrealistic, Neo-Dadaist lyrics, they speak above the factorylike din of the unconscious.

Yet they are hung with rural implements. As Andrew Kelly wrote in the Mood Swings catalogue, Dylan’s “unbridled creativity has shown reverence for the past, for industry and agriculture of the kind now being consigned to the past in the developed world … his faith is still in the soil and the hand and the tool.” And as the London-based critic, Sarah Hampson, has written, “the gates are clearly Dylanesque in their sympathies, rooted in American folklore and blue-collar ethics. But they are also indicative of the man himself, someone who [in his multifaceted songs] has always been a welder of sorts.”

Dylan has resided in Los Angeles since the mid-1970s, and owns a ranch in Montana. Yet he grew up on Minnesota’s Iron Range. He has said, “I’ve been around iron all my life … I was born and raised in iron ore country — where you could breathe it and smell it every day.” His father and uncles ran an appliance store in Hibbing, the town surrounded on three sides by the Hull-Rust-Mahoning Mine, once the largest open-pit iron ore mine in the world. Dylan’s paternal grandparents were working-class immigrants, laboring daily with tools similar to those decorating his gates.

Dylan fled Hibbing in 1959 for college at the University of Minnesota, then went on to New York to pursue his musical career. But the iconography of rural life never left him. It peppers his songs, his movies and books, and it illuminates his art.

He’d drawn since his early years in Greenwich Village, but Dylan began painting during the late ’60s in Woodstock. He suspended touring after a motorcycle accident and, while still writing songs, found time to paint. He illustrated the covers of both the Band’s first album, Music from Big Pink, and his 1970 collection, Self Portrait. It wasn’t until 1974, after a long-awaited comeback tour, that he apprenticed himself to the New York painter and Ash Can School acolyte, Norman Raeben, who taught a group of students daily in an eleventh-floor space above Carnegie Hall.

Dylan has said that Raeben’s unorthodox methods taught him “how to see … by putting my mind and my hand and my eye together, in a way that allowed me to do consciously what I unconsciously felt.” In his songs Dylan had long scoffed at boundaries, but Raeben’s teaching permitted him to relinquish linear time, and as Dylan historian Sean Wilentz has written, “to understand the artistic possibilities of pulling together the past, present, and future.”

Scolding Dylan, Raeben called him “an idiot,” and one day, in criticizing a painting that seemed monochromatic, spat, “You’re tangled up in blue!” Dylan brought in lyrics to “Tangled Up in Blue” a few days later. As he’d explain, “I was just trying to make it like a painting where you can see the different parts but then you also see the whole of it … that’s what I was trying to do … with the concept of time.”

Dylan sketched while on tour and in 2007 he took 322 of those drawings and added color to them — in gouache and watercolor. The result was his Drawn Blank paintings, 170 of which were chosen for his first museum show, at Kunstsammlungen Chemnitz in Germany. A second major show, The Brazil Series, appeared at Copenhagen’s Statens Museum in 2010. The Asia Series premiered at Gagosian in New York in 2011. These paintings were broad-brushed and expressionistic in color, but showed real talent. As Diana Widmaier Picasso (the painter’s granddaughter) wrote of Drawn Blank, “The themes touched on by Dylan … are divided, however schematically, along three main axes: the portrait, the landscapes and the nude. The influence of the group of German Expressionists known by the name of Die Brucke, or The Bridge, can certainly be found here.”

The gates are bridges of sorts. Similar to those in songs, such as Reverend Gary Davis’s “Twelve Gates to the City” and Dylan’s “Gates of Eden,” and in films such as Michael Cimino’s Heaven’s Gate. They are passageways or station stops to grace and spirituality.

Iron gates adorn the entrances to medieval cathedrals, and a rockabilly set protects Graceland, the Elvis pilgrimage site in Memphis. One hesitates to mention Dylan’s gates in the context of judgement day, but he admits they “appeal to me because of the negative space they allow. They can be closed but at the same time they allow the seasons and breezes to enter and flow. They can shut you out or shut you in. And in some ways there is no difference.”

When Dylan began sculptural work in iron is uncertain. He wrote in his 2004 memoir, Chronicles I, that he kept arc welding equipment at his Malibu estate and had been making “ornate iron gates … from junk scrap metal,” since the late 1980s. In the late 1970s he told the Minnesota Times that, “I like to blast sculpture out of metal.” About then, a musician who was teaching Dylan classical guitar was heard to say, “One afternoon Bob arrived in his pickup truck loaded with every sort of scrap and said, ‘Look at all this great junk we collected today!’” Salvaged car bodies dot his property and a studio with shelving marked “Auto,” “Plow Parts,” and “Misc.,” stands nearby. Dylan writes of iron, in the Mood Swings catalogue: “I’ve always worked with it in one form or another.”

Or perhaps against it. I recall walking Hibbing’s streets in 1968, while researching a book about Dylan, and watching autos coated with red ore dust pass, rail cars loaded with raw iron lumber by, then drinking in Hibbing taverns beside miners coated with rust-colored grit. In Hibbing, one worked in the mines or for the businesses servicing miners. It was get out or choke. Art, in the form of music, was Dylan’s ticket to ride.

Paul Green, president of Halcyon, has said that he visited the Los Angeles studio in 2007 and convinced Dylan that he should show the gates. “I didn’t know he was sculpting things,” Green says, “but he had been making these gates for himself and for friends.” Dylan spent three years completing iron work for the Halcyon show, and all pieces sold, reportedly for as much as $415,000 each.

Despite their size (one is 68 by 61 by 10 inches) and weight, the gates are airy. And they are simply beautiful. Their shapes, circular or rectangular, are mandala-like, suggesting a rustbelt spirituality. They seem in part to synthesize what Dylan has attempted with painting, poetry and song.

In 1975, a year after studying with Norman Raeben, he released a song titled “When I Paint My Masterpiece.” In it he recalled a trip to Rome and a chilly night on the Spanish Stairs. He’d rushed back to his hotel room, where, he imagined, Botticelli’s niece awaited. “She promised that she’d be right there with me,” Dylan sang, “when I paint my masterpiece.”

Perhaps that promise should be amended to include sculpture. For the forging of these pieces constitutes the most elemental of Dylan’s endeavors. Born of flames, fumes and molten iron, they are volcanic. And they are his closest encounter with the rough manual labor that surrounded him as a boy, that he’s revered in song but fled in life.

At Halcyon next fall, Dylan will show a new collection of watercolors and other paintings, as well as seven ironworks. One expects the latter also will be expressions of rustbelt spirituality. For as he sang on the 1974 album, Planet Waves, “My dreams are made of iron and steel / With a big bouquet of roses hanging down / From the heavens to the ground.” 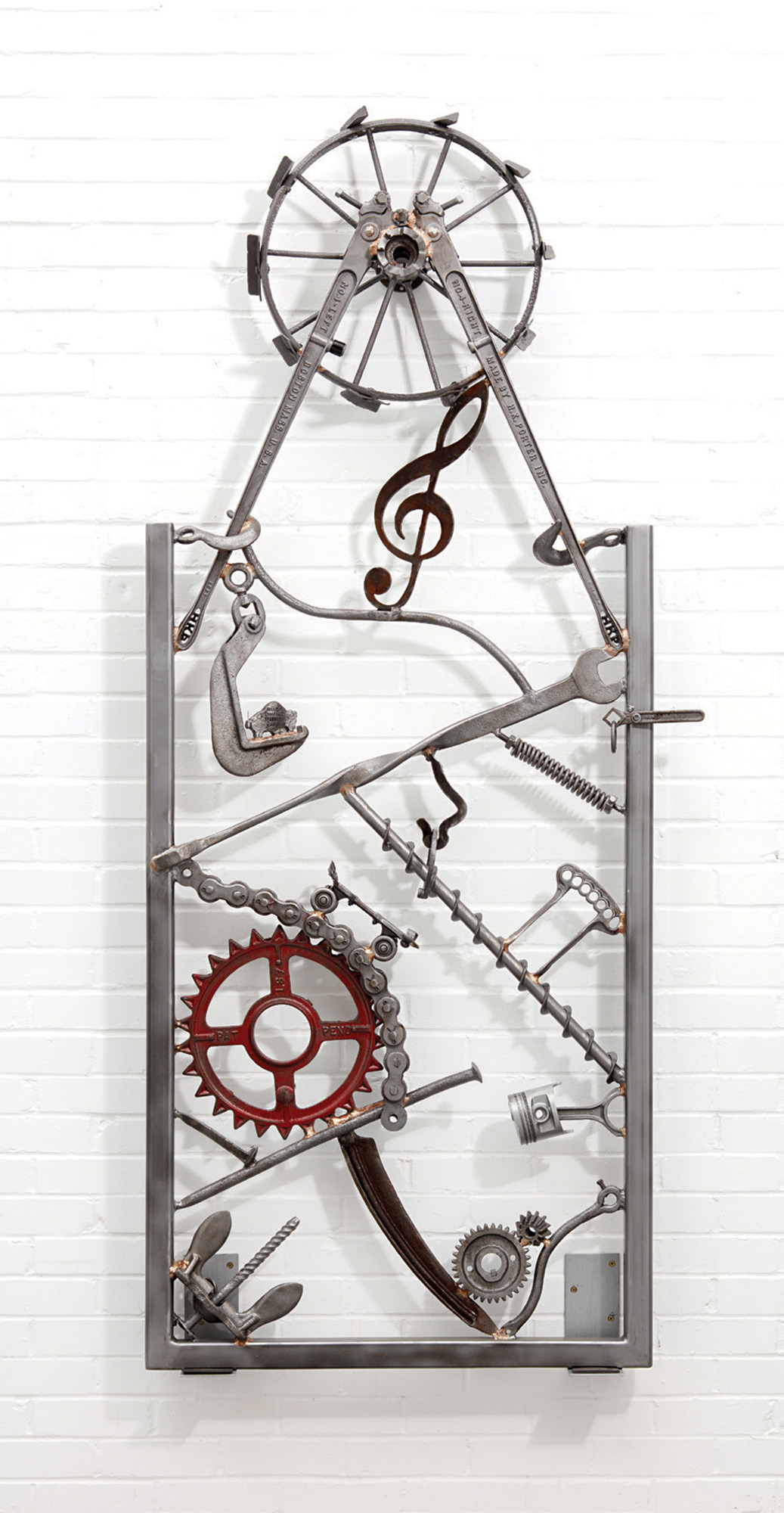 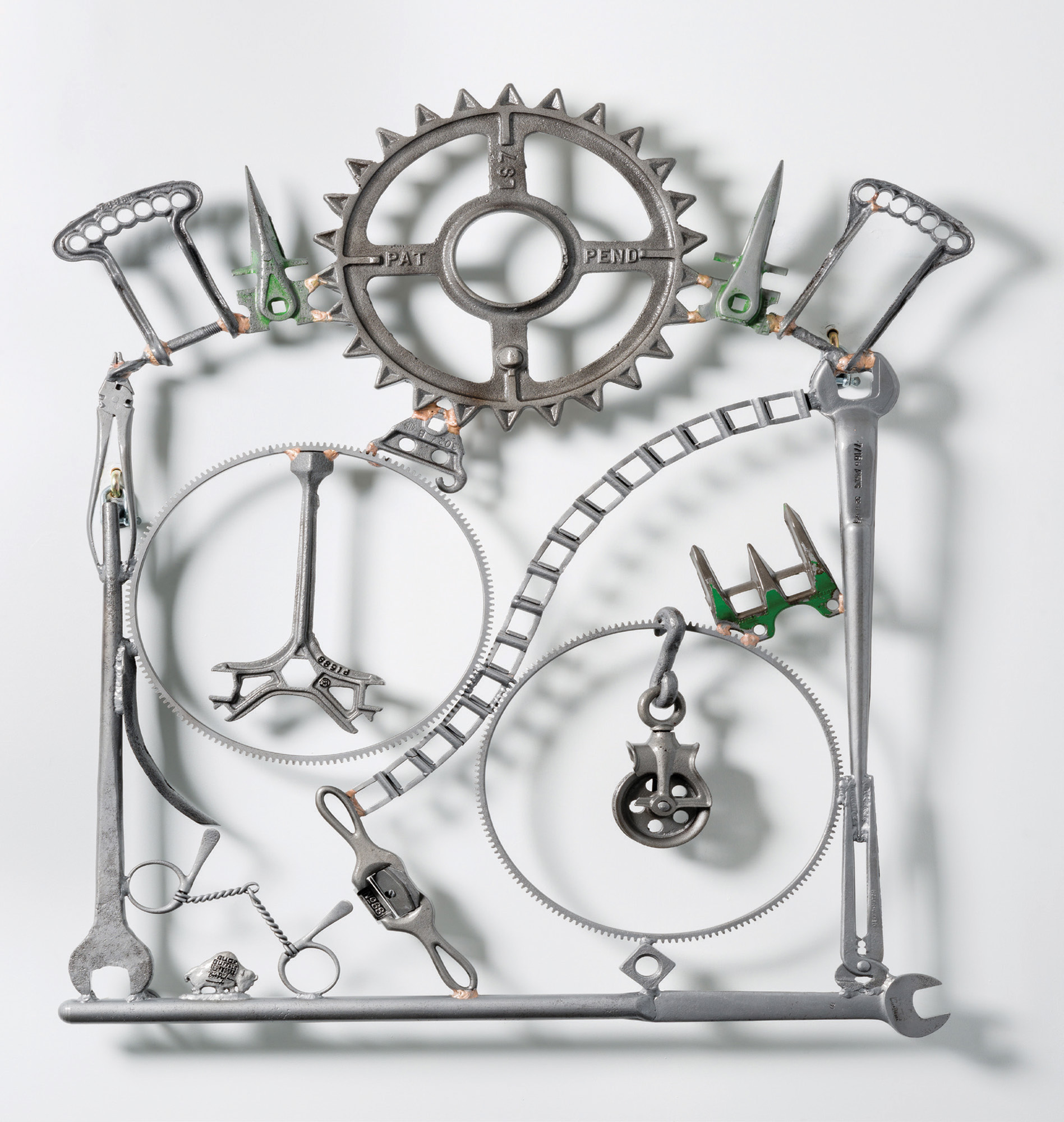 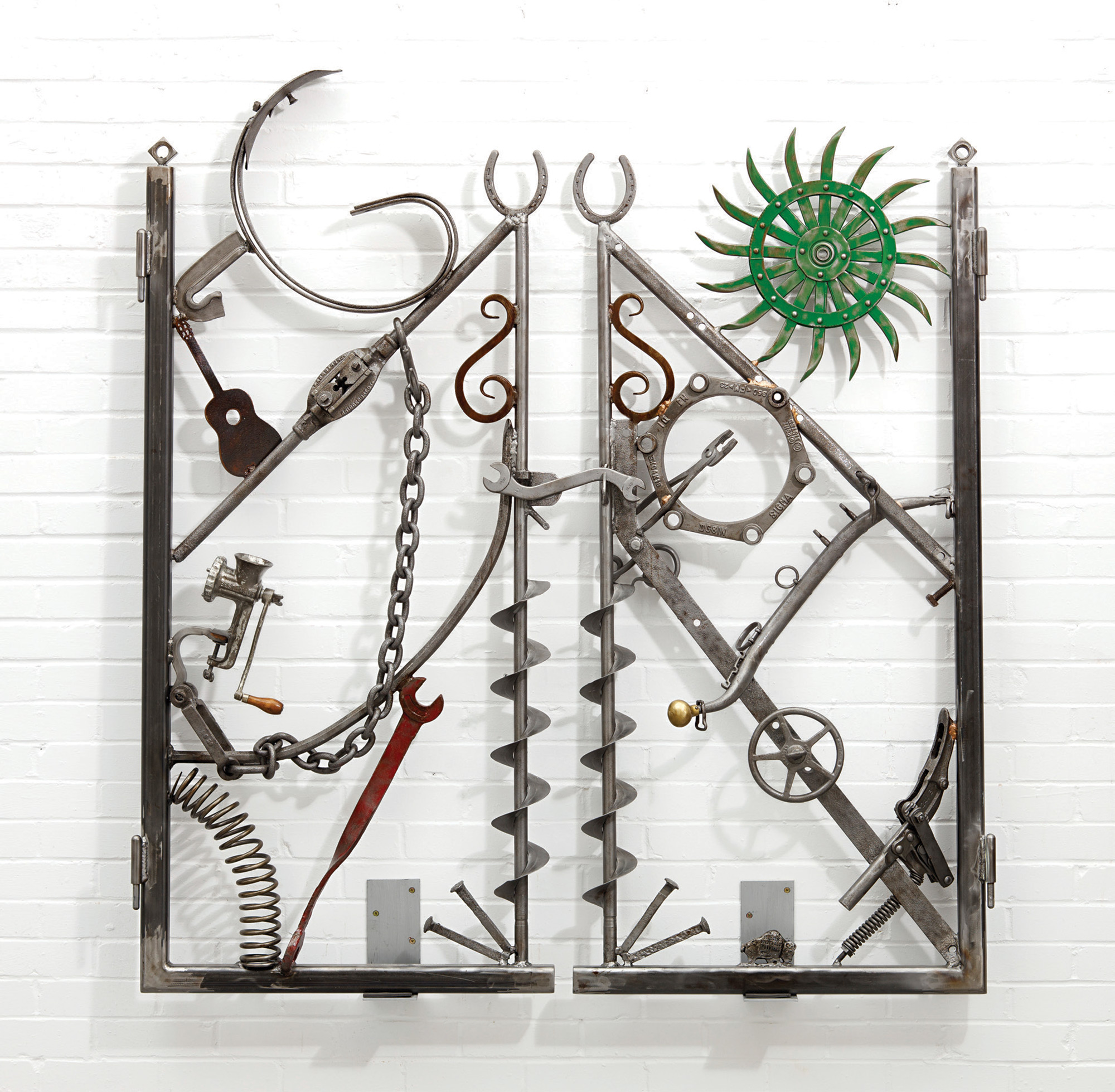 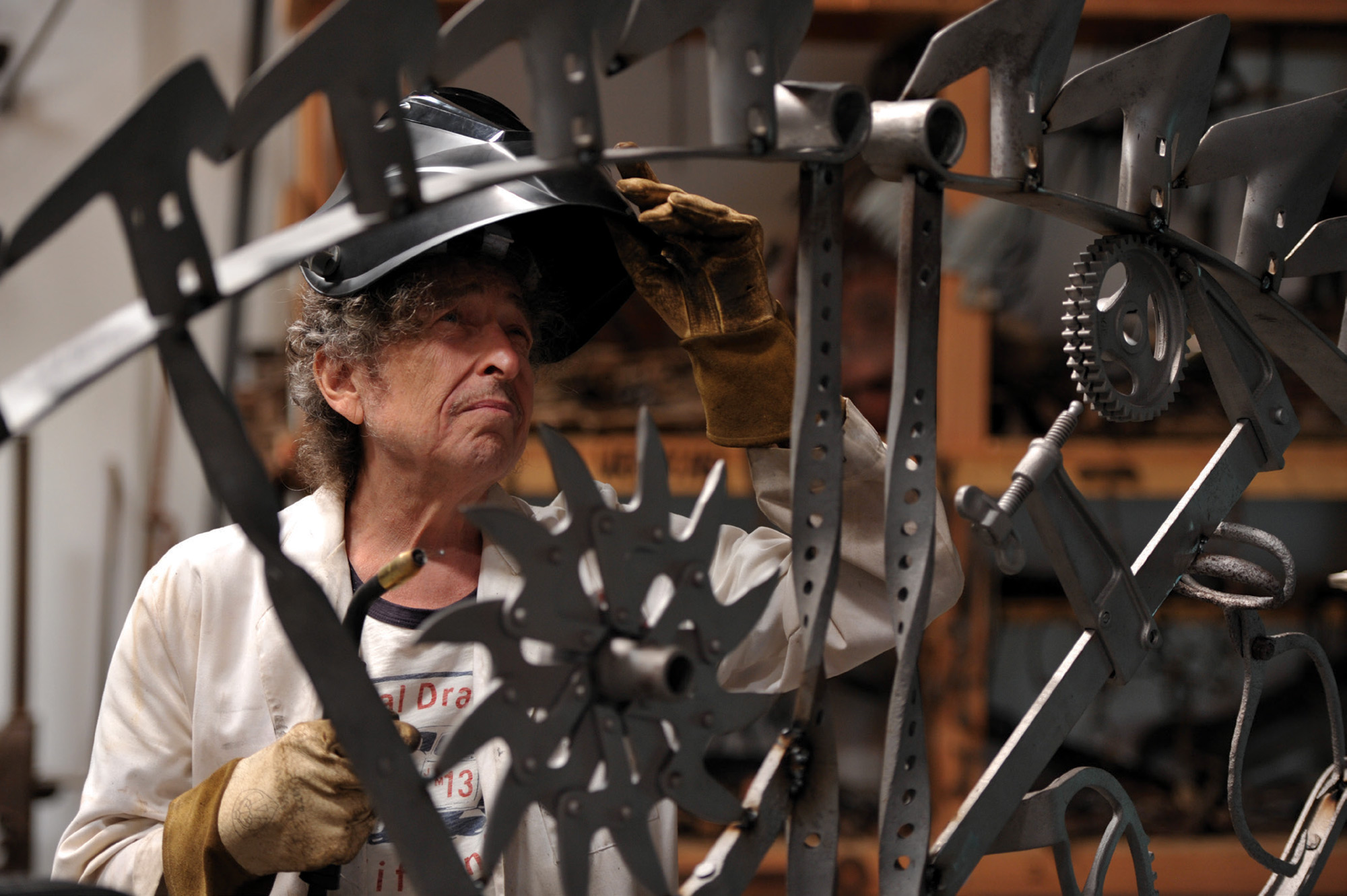 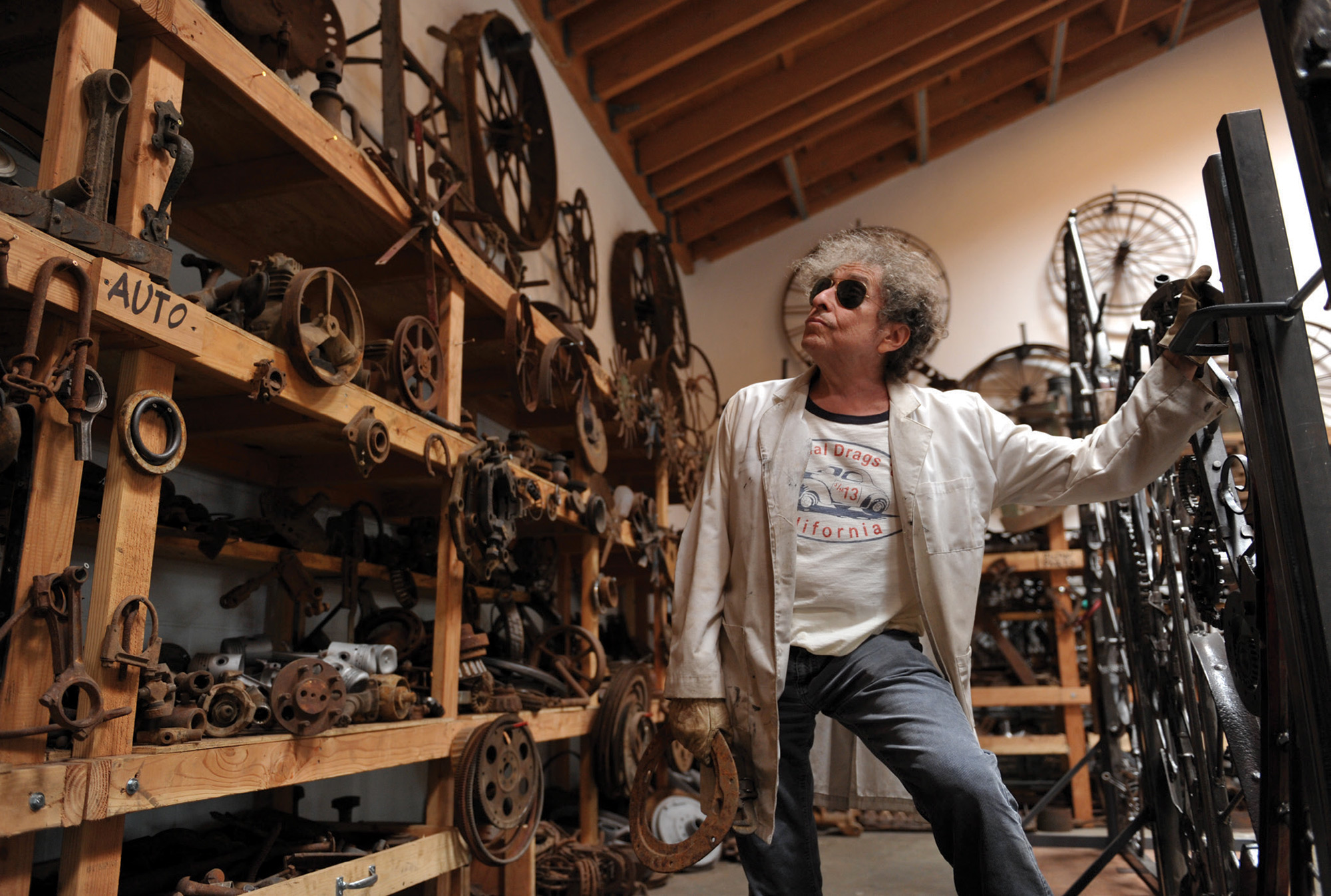