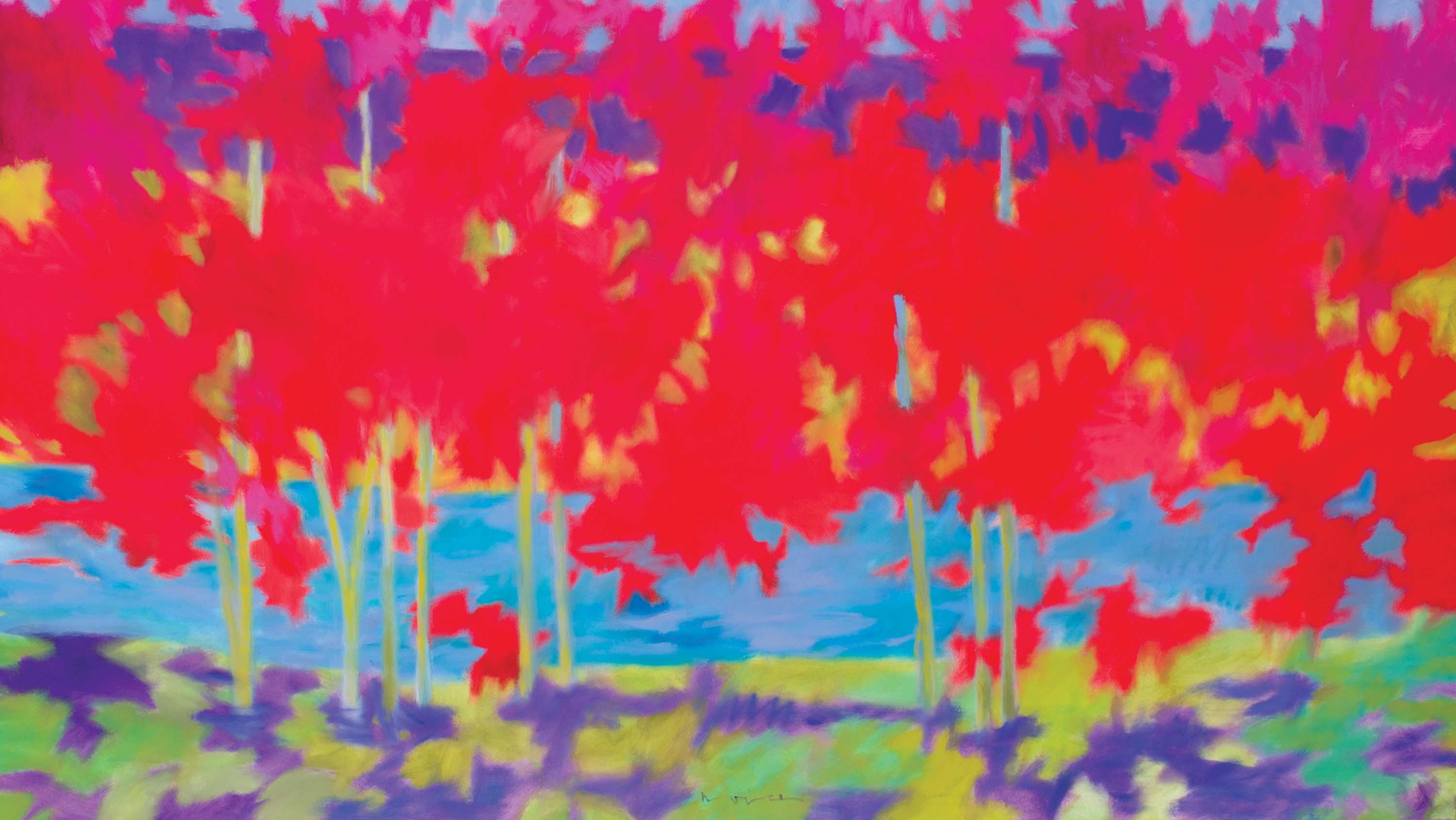 MARSHALL NOICE COMES FROM A VERY GENEROUS emotional place — in person and on canvas,” says Liz BoyKin of Lanning Gallery Sedona, Arizona.  “Last spring, he spent some time here, painting in the gallery,” says BoyKin. “I have to say we really missed him when he left; he’s such a pleasure to have around — a very fun presence. And he’s happy to talk with others as he works. He’s very outgoing but able to capture an inward vision.”

Noice’s mantra is, “Think it, do it.” It’s an approach you can see in his work and in his life. After 23 years of running a successful commercial photography business, he decided in the late ’80s that it was time to transition to painting.

“I felt like it was something I needed in my life,” he says. “I don’t know that I decided to paint. It was a natural choice. It’s like eating, breathing or sleeping. It doesn’t require self-discipline.”

In the Canyon, a painting Noice created in Sedona, is one of BoyKin’s favorite pieces. “It is pretty iconic in terms of his work,” she says. “There’s a lot going on there, but there’s a nice simplicity about it. He offers more than simply a visual perspective of the landscape; he offers you a piece of himself. It’s just one of the reasons his work — and his approach — are so appealing.”

“I’ve always been drawing and painting,” says Noice. “I probably spent more time drawing in school than anything else — elaborate Western scenes and animals. My grandmother had drawings that I had done when I was 3 years old!”

While he has always painted for the sheer joy of painting, Noice pinpoints a specific series of events that pushed him to further pursue his passion. In 1989, he was hired to photograph a collection of Blackfoot artifacts for sculptor Bob Scriver. Noice spent three months engrossed in the project.

Soon after, there was an exhibit of his photography at the National Museum of Wildlife Art in Jackson Hole, Wyoming. The museum also had an exhibit of paintings by Theodore Waddell.

“I was so moved by his work that when I came home, I decided that I was going to make paintings of the artifacts I had photographed. I started painting and I couldn’t quit doing it.”

In an effort to make way for more canvases — and more opportunities to paint — Noice decided he needed to do something with the paintings he had completed. He shared them with a gallery in Santa Fe, which immediately agreed to take them. He approached a gallery in Jackson Hole, which also agreed to accept his works. And they started selling.

“I started making a plan to paint half time and photograph part time. Three years later, I quit taking photographs.”

Noice attributes a lot of what he does as a colorist today from looking at those artifacts.

“They were so intricate and all about color,” he says.

“Orange against magenta, add a splash of lime green … I was really influenced by their colors. And the randomness! The color combinations were perfectly random. They would probably be much less interesting if it wasn’t.”

According to Noice, the idea to paint landscapes didn’t even occur to him at first. Then, one day he was painting a highly abstract war shirt that had been worn by the Blackfoot chief Two Guns White Calf. A portion of the shirt was trimmed with dangling, white weasel tails.

“As I was painting these vertical white lines, I realized they were no longer fringe on a shirt, he says. “The weasel tails had changed into the trunks of aspen trees! It was clearly a landscape. And kind of a homecoming. Having spent years photographing landscapes, it was familiar territory to me. I never painted another artifact again.”

At the same time, Noice says the landscape is more of a “pretense” for his work. While he aims to be true to the essence of his subject, his paintings typically begin with an idea or “problem” he wants to explore.

“A lot of these ideas are inspired by landscape, but typically relate more to color, shape and contrast: thick next to thin, light against dark,” he says. “That’s what I find endlessly fascinating.”

“Marshall doesn’t stick to reality, but he doesn’t go too far off,” says BoyKin. “He pushes the colors enough that you know that you aren’t looking at something literal. You are looking at something more. You can see a place, but it’s combined with his own emotion. It’s one of the reasons his trees may be blue or yellow and his barns purple.”

Less concerned with making a literal rendition of a scene and more interested in capturing what he sensed from that moment, Noice’s decision-making process is decidedly different than that of many other artists.

Once he has an idea and the canvas is covered with paint, “All bets are off,” he says. The painting — and the work itself — dictates what needs to happen. Noice continues to work, doing what needs to happen, until it resonates with him and the spirit of the place. This process may take several weeks, or quite possibly several years. In his studio in Kalispell, Montana, it is not uncommon to find him working on 12 to 16 paintings at a time.

“I find that it’s more about doing than thinking,” he says. “I paint more from the heart and the gut than my head. The more I can keep my heart in the process — and my head out — the happier I am with the result.” 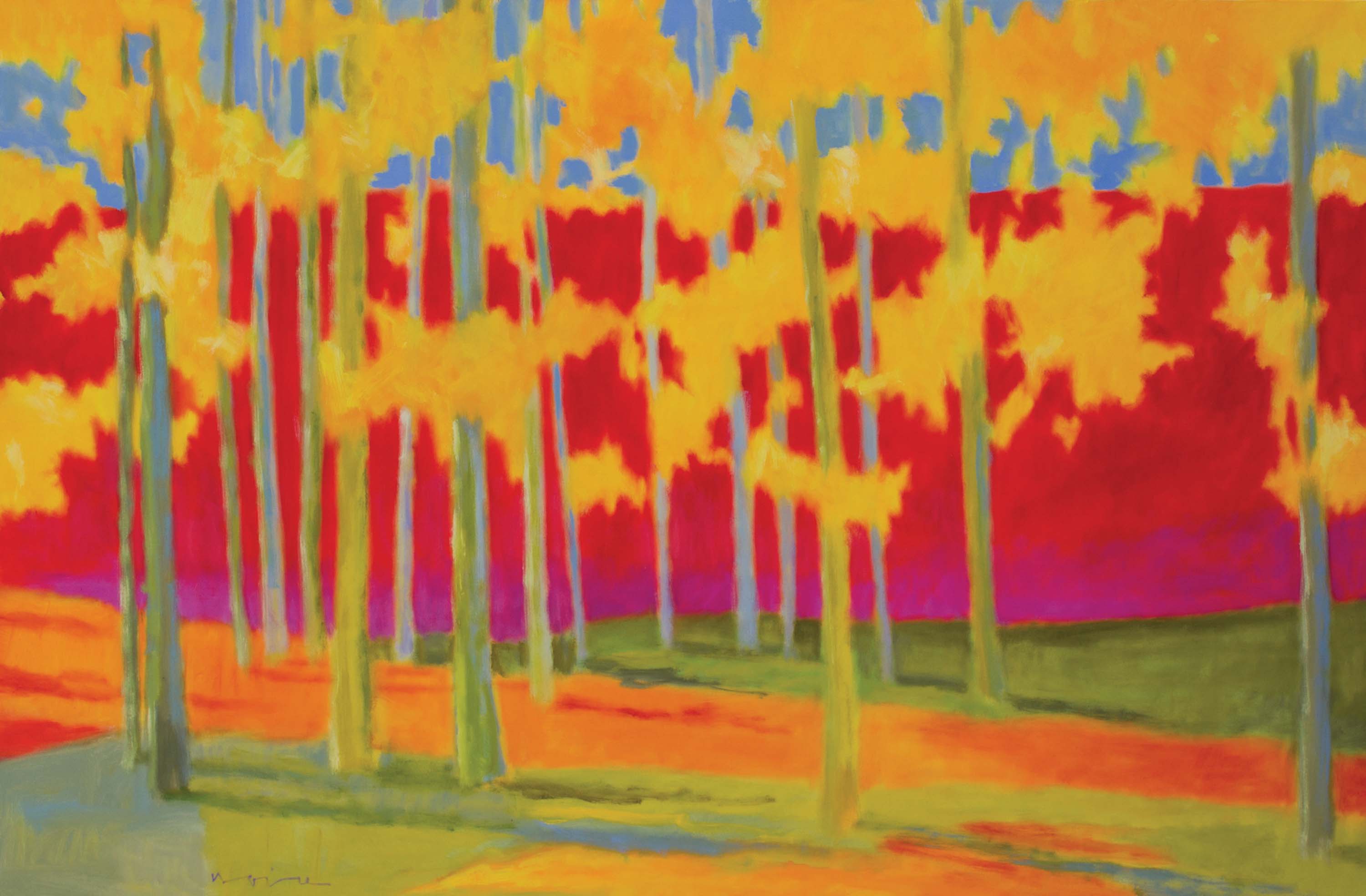 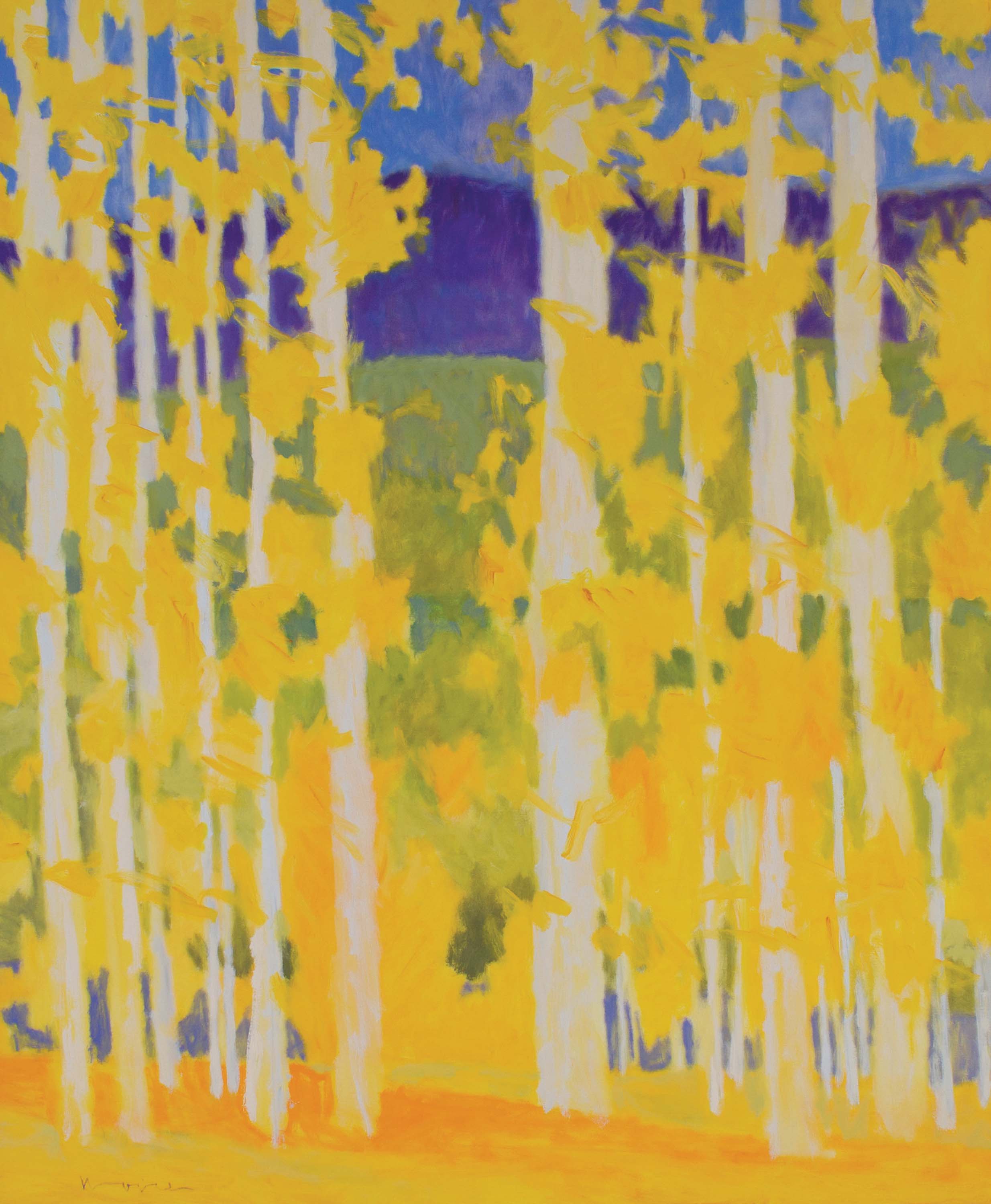 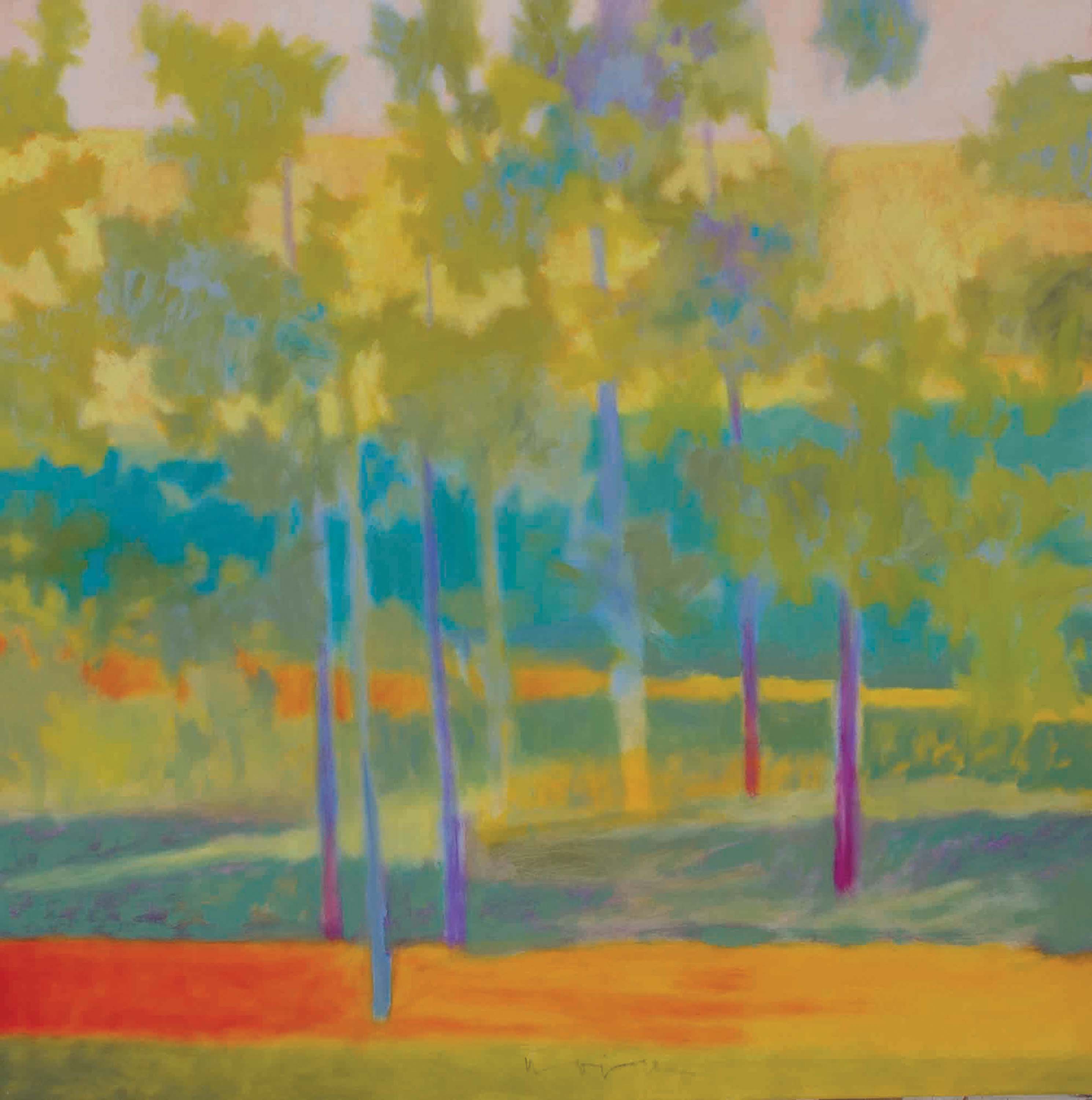 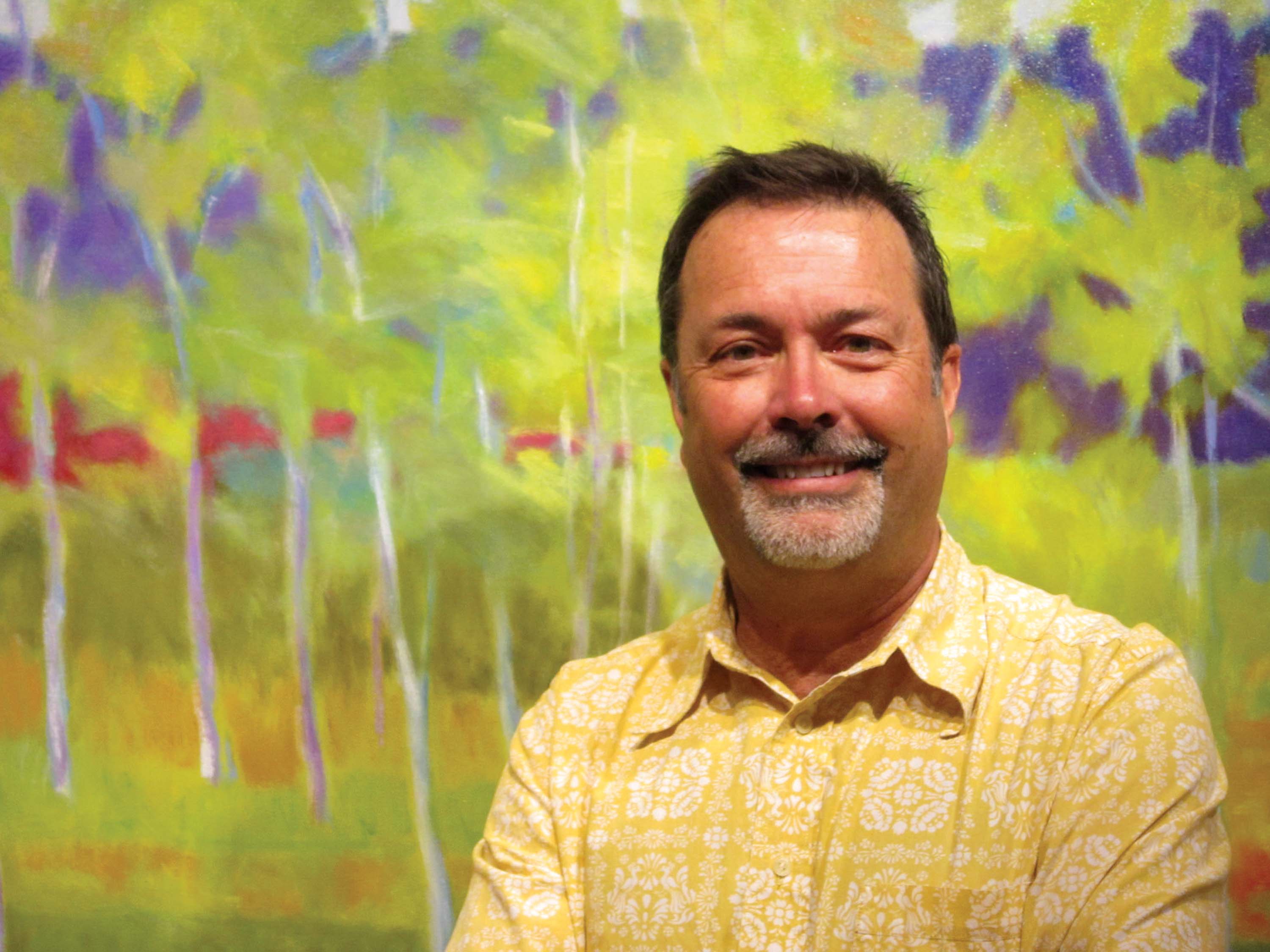 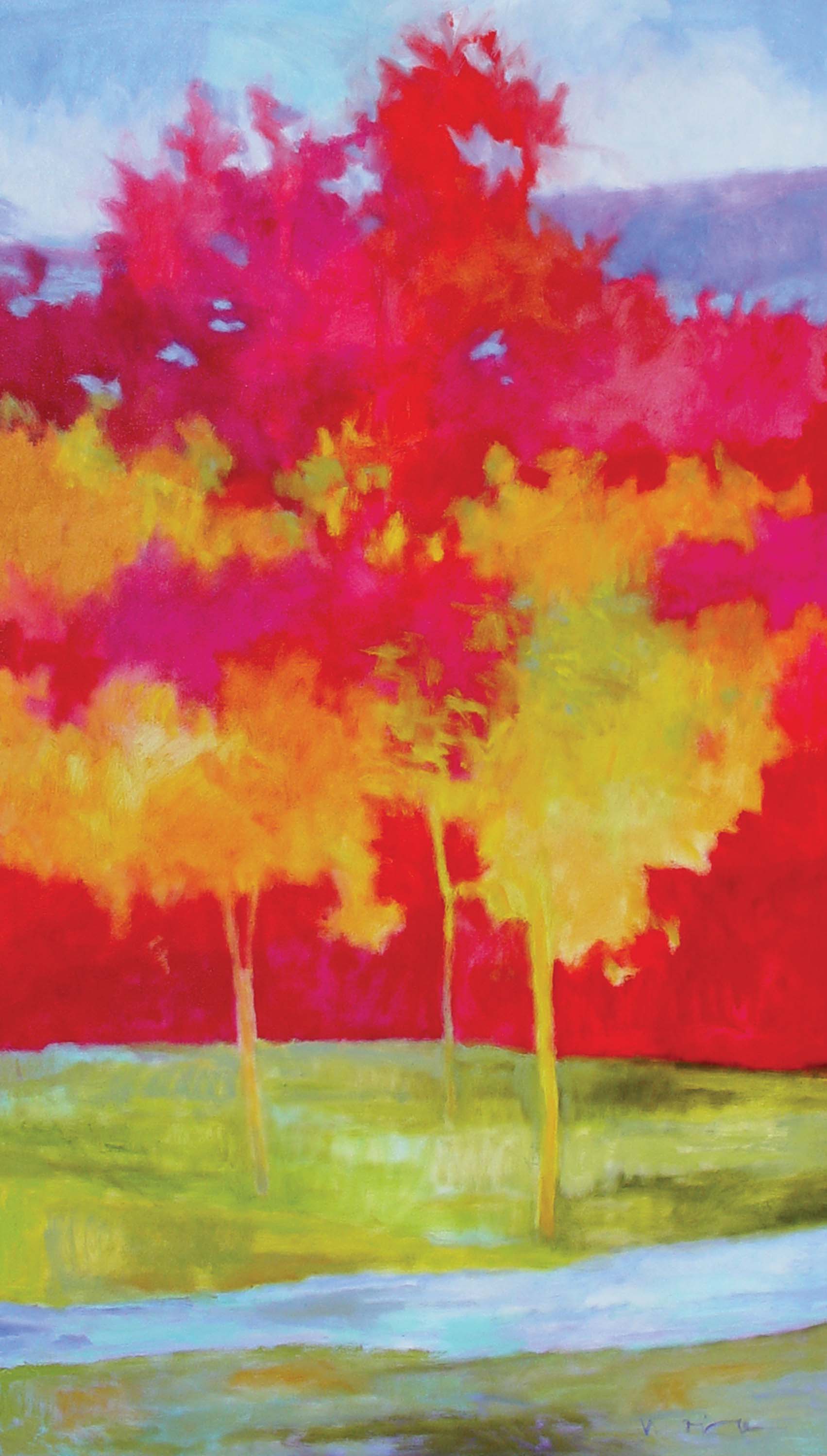