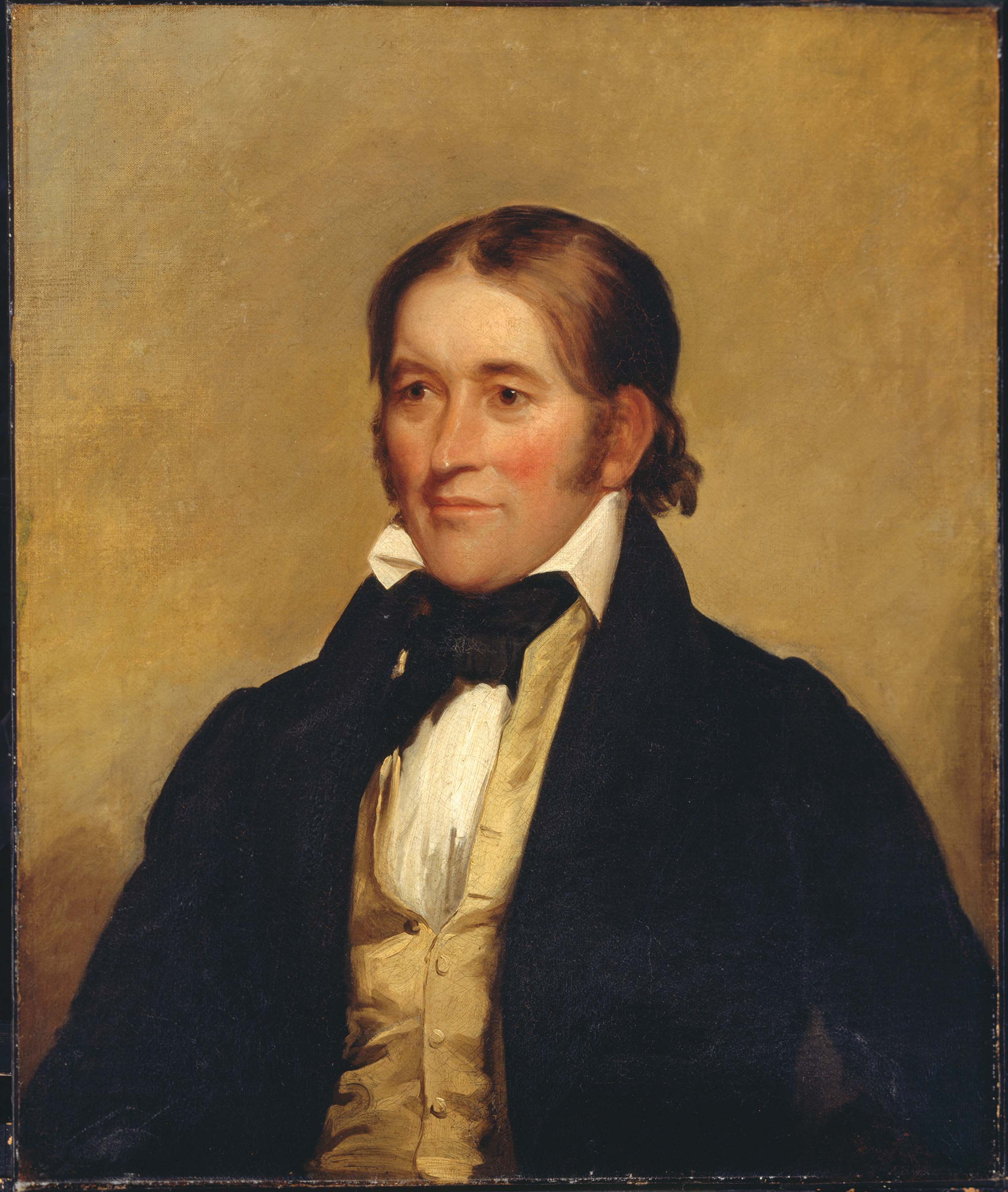 AT 9 YEARS OLD I WORE A COON-SKIN CAP, fringed jacket, faux-leather britches and carried a muzzle-loading rifle. The flintlock was a broomstick fitted with cabinet latches, but the coonskin cap was real, ordered from a supply house that shipped 5,000 a day. I hummed “The Ballad of Davy Crockett” and might have been that boy standing in the 1955 “Your Hit Parade” TV skit, being sketched by a fifth-grade art class, as the glamorous Gisèle McKenzie trilled the song which would sell 10 million copies and stay on the charts for 13 weeks.

I was not that boy. But my uncle, William A. Nichols, wrote the skit and I might have been present in the NBC Studios at Rockefeller Center when it was aired. I don’t recall, but it was there that my personal relationship with Crockett began. My uncle, a writer for “Your Hit Parade,” the live revue that dramatized each week’s hits with musical skits, was driven mad by “The Ballad of Davy Crockett.” It was his job to create a new sketch each week to dramatize the song. The first was easy: a vocalist with a group of school children before the Alamo, where Crockett died, singing a history lesson. But where to from there? There were skits with BB gun flintlocks, on tours before the Alamo, where Crockett died, and with stuffed bears — one of which the song claimed he killed “when he was only 3.” After 12 weeks I remember my uncle crying, “Not another sketch!”

I was reminded of this when I stumbled upon Chester Harding’s 1834 painting of Crockett in Washington, D.C.’s National Portrait Gallery — Harding’s being one of numerous depictions of him in collections around the country. Most of us remember the Canebrake Congressman from Walt Disney’s glorification of him as a buckskin-and-coon- skin-cap wearing frontiersman in the television mini-series and subsequent film of 1955. But in The Portrait Gallery’s Victorian corridors, flanked by portraits of presidents and politicians, is the image of what seems a modest, well-written by toby thompson groomed man, dressed in a dark suit, tan vest, white shirt and black tie — in contrast to the bumpkin of legend, “half- horse, half-alligator,” and “a little touched with snapping-turtle.”

The formality of Chester Harding’s portrait is no surprise. Harding [1792 – 1866] earned his reputation making notables’ portraits — he was the Richard Avedon of his day — and his paintings of Daniel Boone are the most accurate images of America’s first frontier hero. Davy Crockett was its second, a congressman from Tennessee when Harding painted him, and in Boston to support the anti-Jacksonian Whigs. As the National Portrait Gallery’s Web site states, “The image agrees with a contemporary description: ‘Colonel Crockett is an uncommonly fine looking man. His face has an exceedingly amiable expression and his features are prominent and striking. He wears his hair which is black, (with a light shade of brown) parted down the centre of his forehead, combed back from his temples, and ending in a slight curl at the neck not unlike the simple manner of many of the clergy.’”

I was startled to find Harding’s portrait in so formal a setting; Crockett’s story has been a staple of schlock, not high art, for nearly two centuries. Plays and books about him (not the least, his autobiography) were popular throughout his life, and remain so. He may have been America’s first media celebrity. Paul Andrew Hutton, in Texas Monthly, has written that Crockett was “perhaps the first American to make a living portraying his own fanciful image.” As early as 1831, a tongue-in-cheek drama about his life, “The Lion of the West,” introduced the cliché of Crockett’s coonskin cap and ran for years. After his death, a second play, “Davy Crockett; or, Be Sure You’re Right, Then Go Ahead,” ran from 1872 to 1896 in the U.S. and England. Some 20 films about Crockett have been made, the most recent being 2004’s The Alamo, a revisionist epic starring Billy Bob Thornton. Everyone from Fess Parker to John Wayne and Johnny Cash has played him. Web sites such as eBay groan under the weight of Crockett art and memorabilia. Even the U.S. military has not been immune to sentimentality. In 1956, a tactical nuclear recoilless gun, “The Davy Crockett,” was deployed.

This does not surprise as historically the frontiersman, not the cowboy, was the first romanticized figure of the American West — his fighting prowess legendary. Lord Byron spent a few verses of his epic, Don Juan, praising Daniel Boone, and James Fenimore Cooper’s Leatherstocking Tales made the fictional, gun-toting frontiers-man, Natty Bumppo, an American hero concomitantly with Crockett’s election, in 1827, to Congress.

As a boy, I embraced Crockett’s legend alongside that of the cowboy. My generation (the first subjected to Saturday morning TV) had been conditioned to idealize the buckaroo, and Crockett’s legend, ingeniously marketed by Disney through fashion, captivated all of us. Stores were deluged with perhaps the first flood of commemorative popular art: lunchboxes, thermoses, cocoa cups, plates and saucers, game boards, paintings and posters, T-shirts, ladies underwear and, most famously, a 45-rpm disc: “The Ballad of Davy Crockett.” We loved this schlock art and, decades later, when I met the great- great-great-great-granddaughter of Crockett, I was more impressed by her than with the film star she was married to. Crockett had been her schoolmates’ icon, and she admitted that sharing the same last name as Davy had been difficult: “They wondered why I didn’t wear a coonskin cap.”

As ’50s kids, we were children of the post-World War II urban emigration to a leafy and often wooded suburbia which, in contrast to the inner city, felt like a frontier. Disney capitalized on this displacement, even as artists like Harding and John Gadsby Chapman employed images of Crockett and Boone to help legitimize Manifest Destiny and America’s Westward Expansion. After Crockett’s death, when paintings such as Robert Jenkins Onderdonk’s Fall of the Alamo (with Crockett at its center, swinging a flintlock) appeared, Crockett’s image became politicized, as it remains today. “Remember the Alamo” is a rallying cry for anti-mmigration forces, who associate Crockett’s resistance to Santa Anna’s troops with their opposition to Mexican workers crossing the Texas border. As Hutton writes in his introduction to the autobiography, A Narrative of the Life of Davy Crockett: “Crockett quickly emerged as a symbol of the dawning ‘Age of the Common Man’” and “represented to many the triumph of pure democracy and a complete rejection of the European values of social class and aristocracy.”

This notion infiltrated my ’60s generation’s rejection of both high-and middle-class values, and of all Establishment pre-tense. The anti-Vietnam marches of that era were every bit as theatrical as ’50s TV, and of Crockett’s political campaigns — down to their costumery. Neil Young sang, “Tin soldiers and Nixon coming, we’re finally on our own,” and Jim Morrison howled, “We want the world and we want it now!” Did Young’s fringed buckskins and Morrison’s lizard-tight leathers owe a greater debt to Walt Disney or to Yves Saint Laurent?

Recently at the National Portrait Gallery, I appraised Harding’s portrait of Crockett — a Jacksonian Democrat and two-term Tennessee congressman — and considered today’s political climate. His was a time when congressmen did not fear opposing their party’s mandates (Crockett became an energetic anti-Jacksonian over the Indian Removal Act) when it least suited their careers. Having lost the election of 1834, he said, “I bark at no man’s bid. I will never come and go, and fetch and carry, at the whistle of the great man in the White House no matter who he is.” Then he added: “I told the people of my district that I would serve them as faithfully as I had done; but if not … you may all go to hell, and I will go to Texas.’”

He died there in a manner befitting a folk hero, and paintings of his combat at the Alamo are as common as those of him as youthful frontiersman. Davy Crockett’s Almanack, suffused with tall tales and rough woodcuts, was published between 1835 and 1856. And books about his life have not ceased appearing. As William Henry Huddle, of the Texas State Library Archives, has written, “So maybe Davy Crockett escaped from the Alamo after all. He’s still up in the misty heights of the topmost Rocky Mountains cavorting with Death Hug [his pipe-smoking bear], Mississip [his pet bison], and all his other critters.” His legend is secure, as is the art depicting him — both fine and popular — that survives.

My uncle, struggling in the afterlife to write yet another Crockett sketch for “Your Hit Parade,” might feel justified. 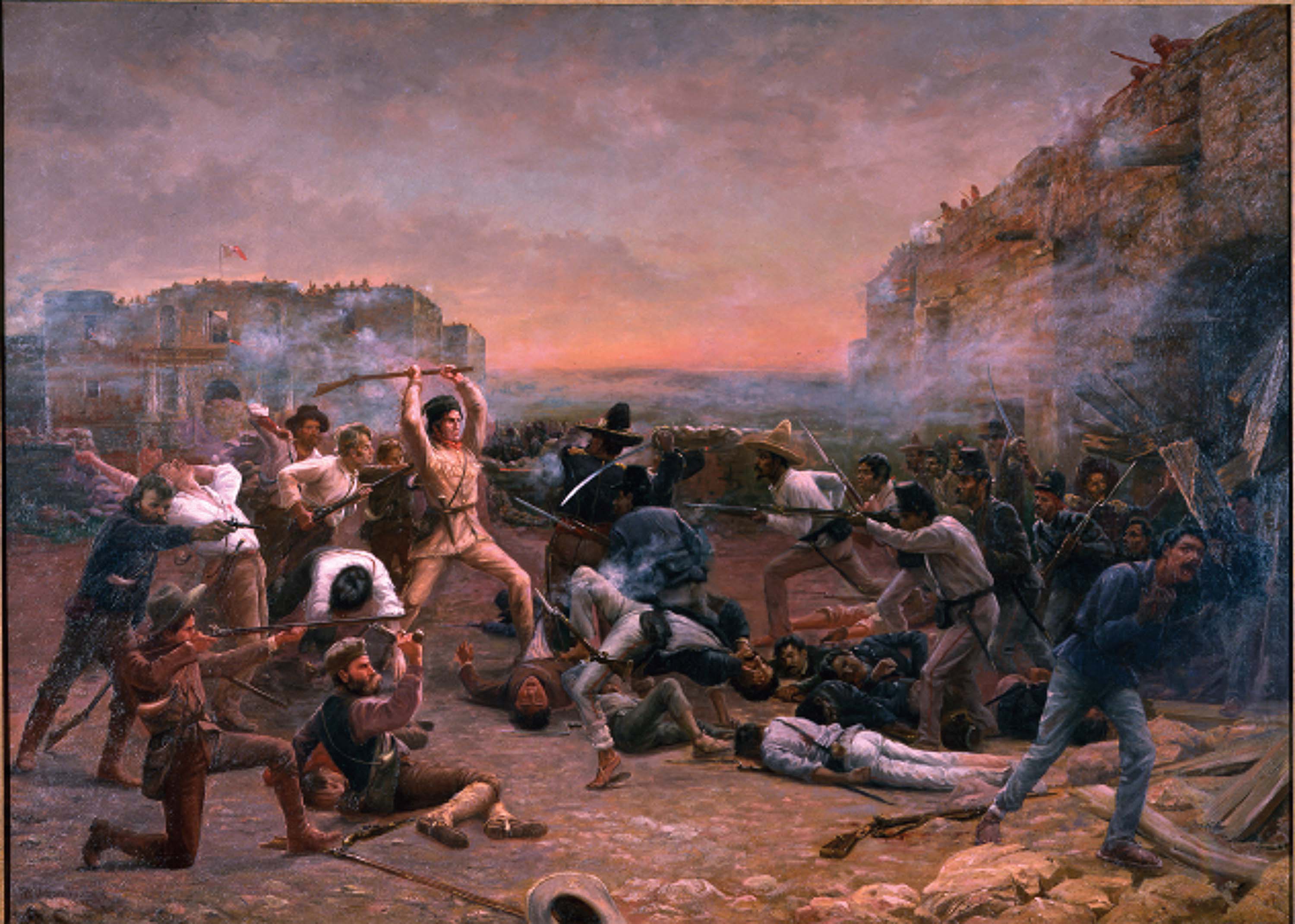 Robert Jenkins Onderdonk | “Fall of the Alamo” | Oil on Canvas | 1903 | Courtesty of Friends of the Governor’s Mansion, Austin, Texas