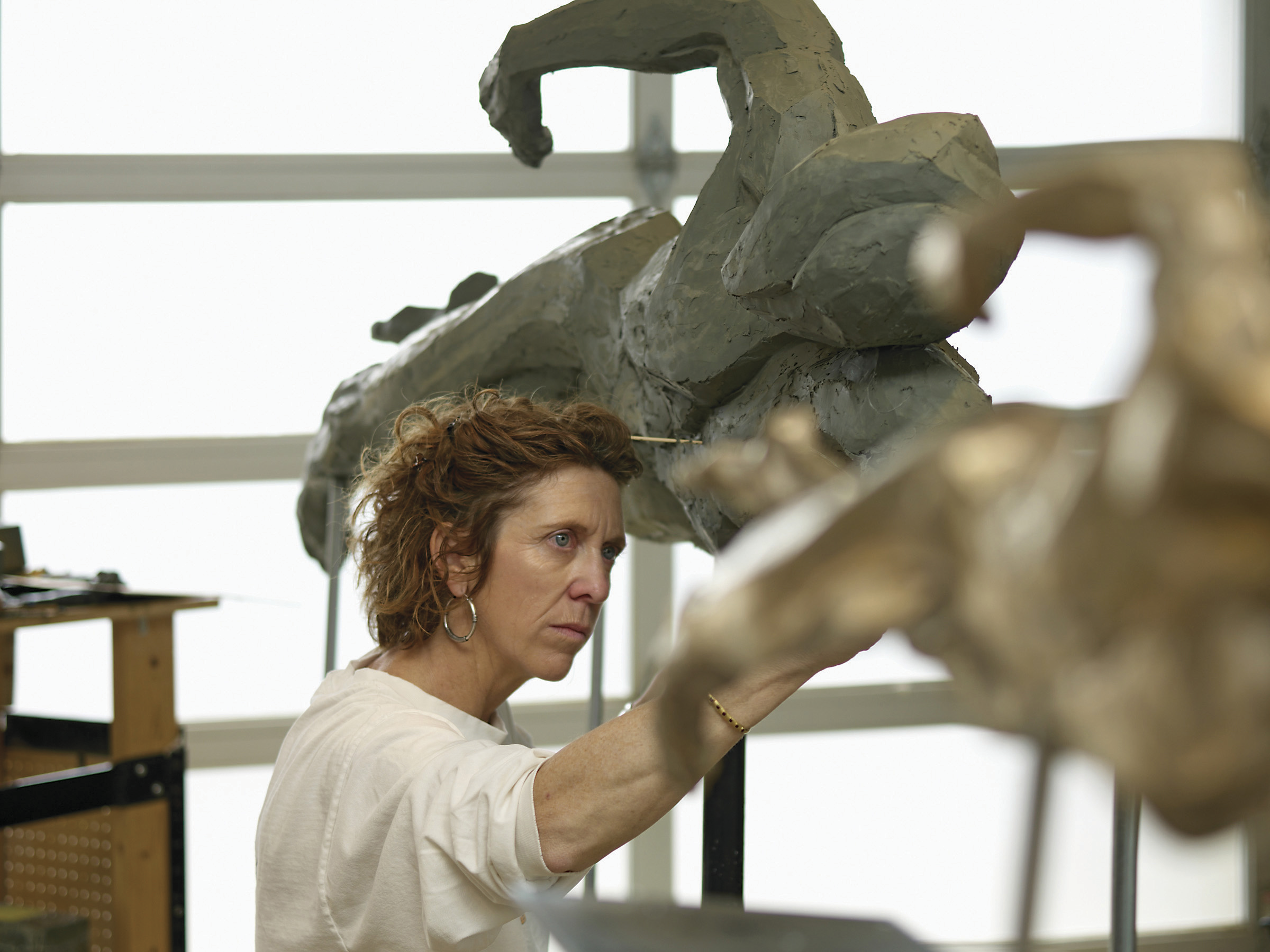 TO SAY THAT GAIL FOLWELL'S PIECES represent the yin and yang of human experience would leave a lot out. Her work is the yin and yang and every possible shape and shade of gray in between. In her Boulder, Colorado, studio, a sculpture of hockey players crashing sits comfortably among horses, angels and mothers. Behind them are paintings of teenagers. An image of lab-coated scientists with filaments of light twisting above their heads is nearby.

When Folwell speaks of finding inspiration everywhere, she means it. “You know how texting and driving is dangerous? I was sketching and driving,” she quips, remembering a moving scene she witnessed alongside a lonely highway. She can’t enjoy the musical part of a concert unless she closes her eyes, blocking out the visual stimulation. I imagine admirers of her Dee Dee B sculpture are glad that Folwell kept her eyes open during that Dee Dee Bridgewater concert she attended several years ago.

Whether it is sports, music or love, Folwell’s body of work is held together by its energy. Adrenaline and energy simply pour out of her contemporary pieces, which captivate, inspire and excite.

This raw power can be found at the bottom of a Rocky Mountain ski slope in Vail, Colorado. Rising above chair lifts and ski racks is The Edge, the twice-larger-than-life bronze sculpture of a skier seemingly flying off the mountain. Bill Rey of Claggett/Rey Gallery in Vail remembers when Olympic medalist Jimmie Heuga critiqued the sculpture, saying it was probably the finest contemporary ski-racing piece he’d seen. Rey adds that where “most ski sculpture is very stagnant and dated,” Folwell’s piece is current. “It’s the two-footed skiing that’s happening now in the race circuit, all the professional athletes … are just blown away by it,” Rey says. “Looking at that sculpture, she just nailed it. And show me another! I would put it up against any ski racing or skiing piece ever done. I have never seen one that really rocked like that piece.” Folwell admits being moved to tears when Olympic medalist Cindy Nelson told her that she wished the piece was around when she was racing because it got her “so psyched.”

Luckily for future athletes, Folwell’s pieces are appearing across the county. A swimmer hangs above the pool at Bowling Green State University in Ohio. A pitcher stands mid-windup outside the Dr. Pepper Ballpark in Frisco, Texas. Two basketball players will be jumping for the ball at the University of Southern Alabama by the end of the year.

Personal sculptures are on another end of Folwell’s spectrum. She moves through her studio, pointing out pieces she sculpted while dealing with indecision, after being awestruck by the touch of her infant son and one piece she sculpted “almost unconsciously” after her mother died. The first piece she ever cast was created while deciding whether or not to change her last name.

Energy is still present in Folwell’s personal work, particularly in The Human Race. “This was the debate [whether or not] to have a third child,” Folwell says. The piece depicts a mother bent over, wind blowing her hair back. Three kids are hanging on to her and she’s attending to two of them with a different face.

Folwell’s energy comes through when she’s talking about her future artistic plans. “There are so many different ways to manifest a good concept,” she says. “It would be fun to start doing some different mediums. I also have a habit of not sticking with things. You know, once you get something down, it’s time to move on … ” She trails off, eyes dancing with the possibilities that working with color and plastics could bring.

Tom Bassett, the director of sales at Claggett/Rey gets just as excited talking about Folwell’s evolution as an artist. “When we first started representing her she was all over the board with different styles of what she was sculpting, but I think she’s really started to focus in on accentuating the planes, and then the form, and I think that’s a really successful way for her to go. It’s very different from how other sculptures are working and it’s just a very personal look.” Rey adds that Folwell “has given herself the freedom to be moved wherever her emotion takes her. … Going through personal tragedy in her life, her sculpture has very much reflected her inner self, and then becoming a mom. … The thing I love about The Human Race is that it almost takes her athleticism and competitiveness into being a mother. Even though that’s not what it’s really about, she’s just absolutely game on. … She’s amazing in every way.”

Although her artistic possibilities and mediums are limitless, Folwell loves the freedom sculpting allows her. She remembers “freaking out” after discovering sculpture because, unlike painting, she was free to self generate. The abstract nature of her work is also freeing. “It’s so much more intense than a still, realistic representation. You can exaggerate all those lines and those cuts. It takes what would be a beautiful body and makes it more intense. You can build that into it by abstracting all those ledges and angles and slash marks. That’s kind of the intensity that you feel when you’re trying to get it right.”

And to all the hockey players, swimmers, horse lovers, mothers, skiers and collectors, Gail Folwell has gotten it right. 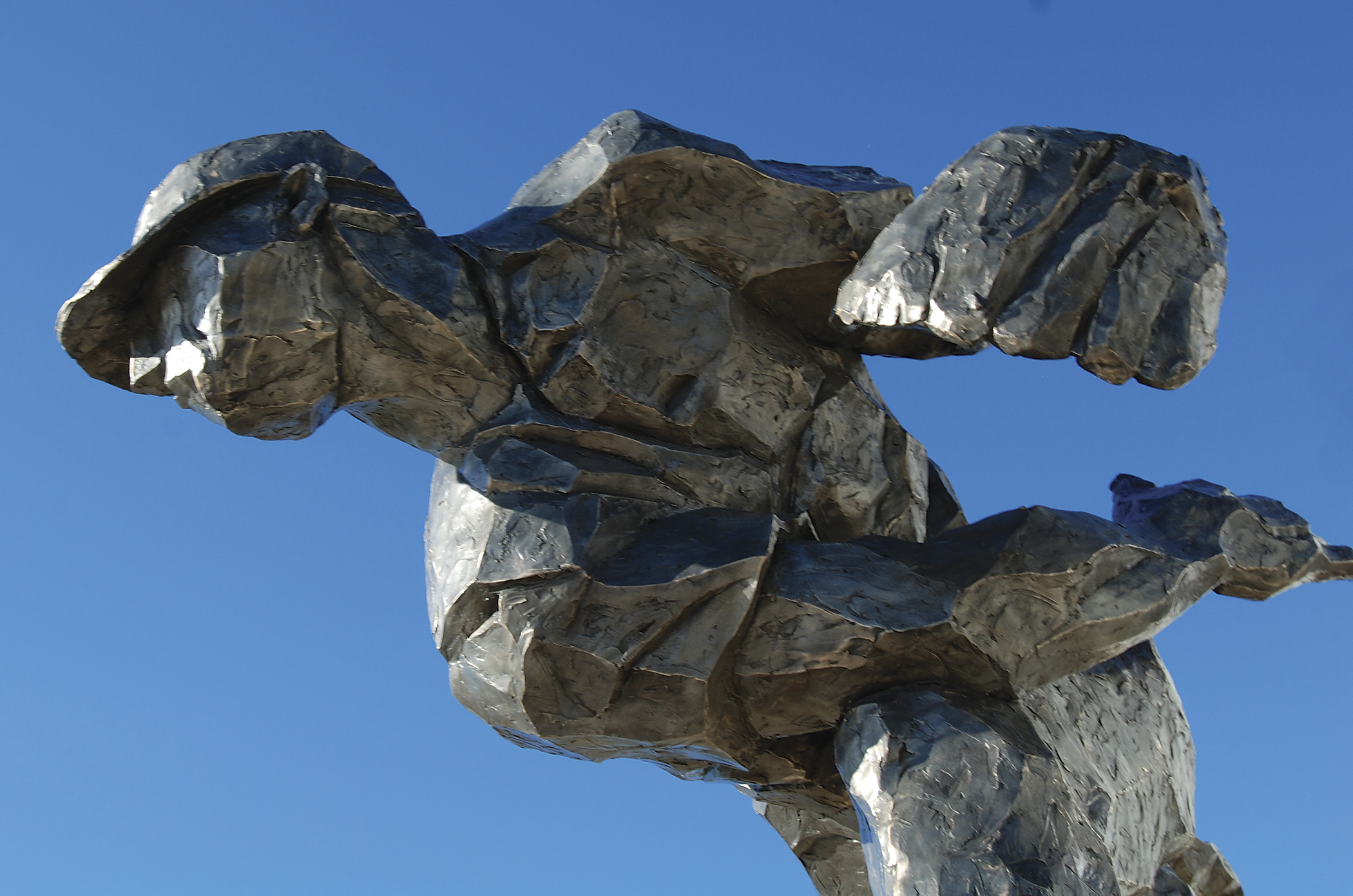 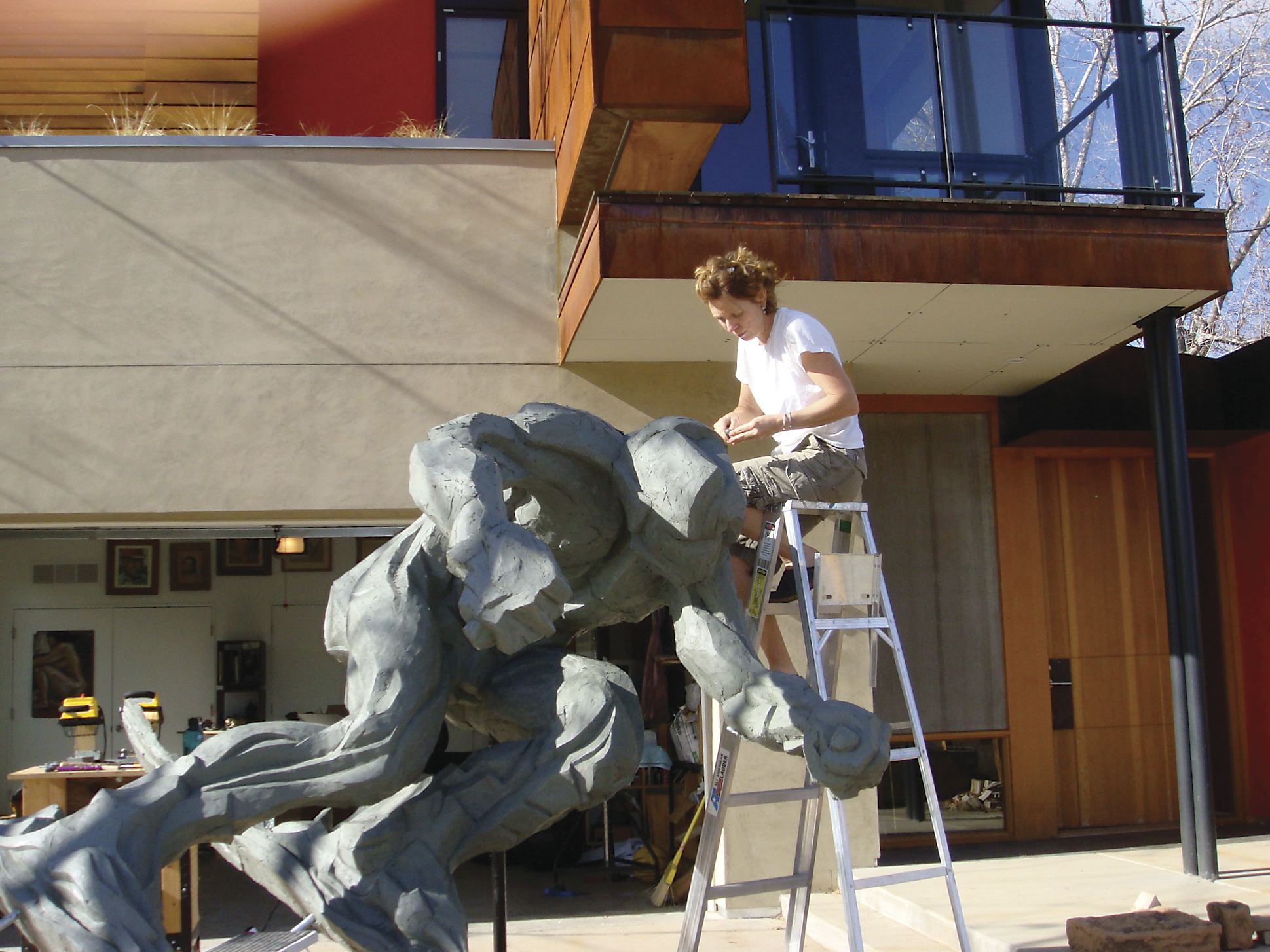 In her driveway, Folwell works on “The Edge” which is installed at the base of the Vail ski area in Colorado. Photo: Taylor Folwell 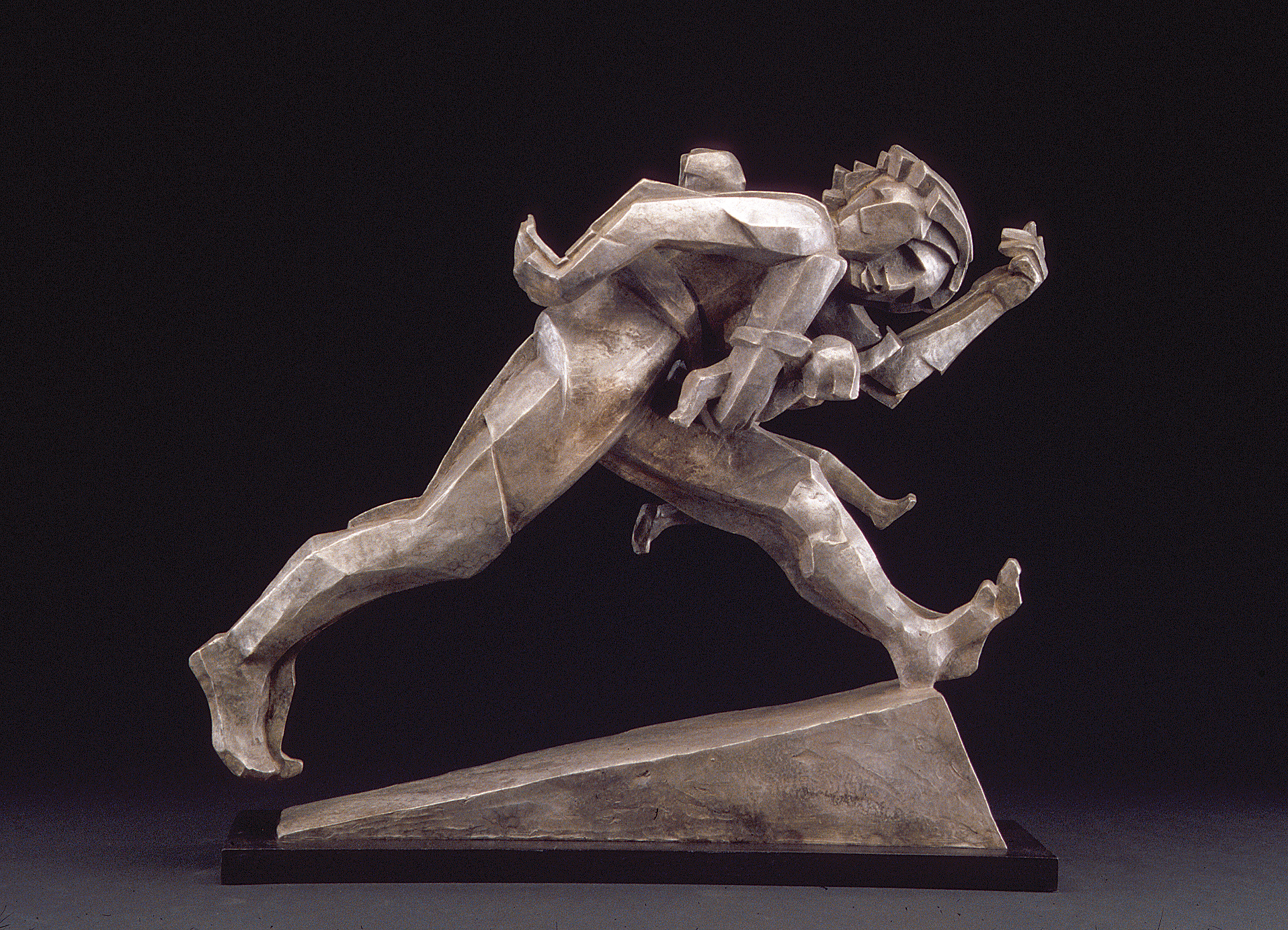 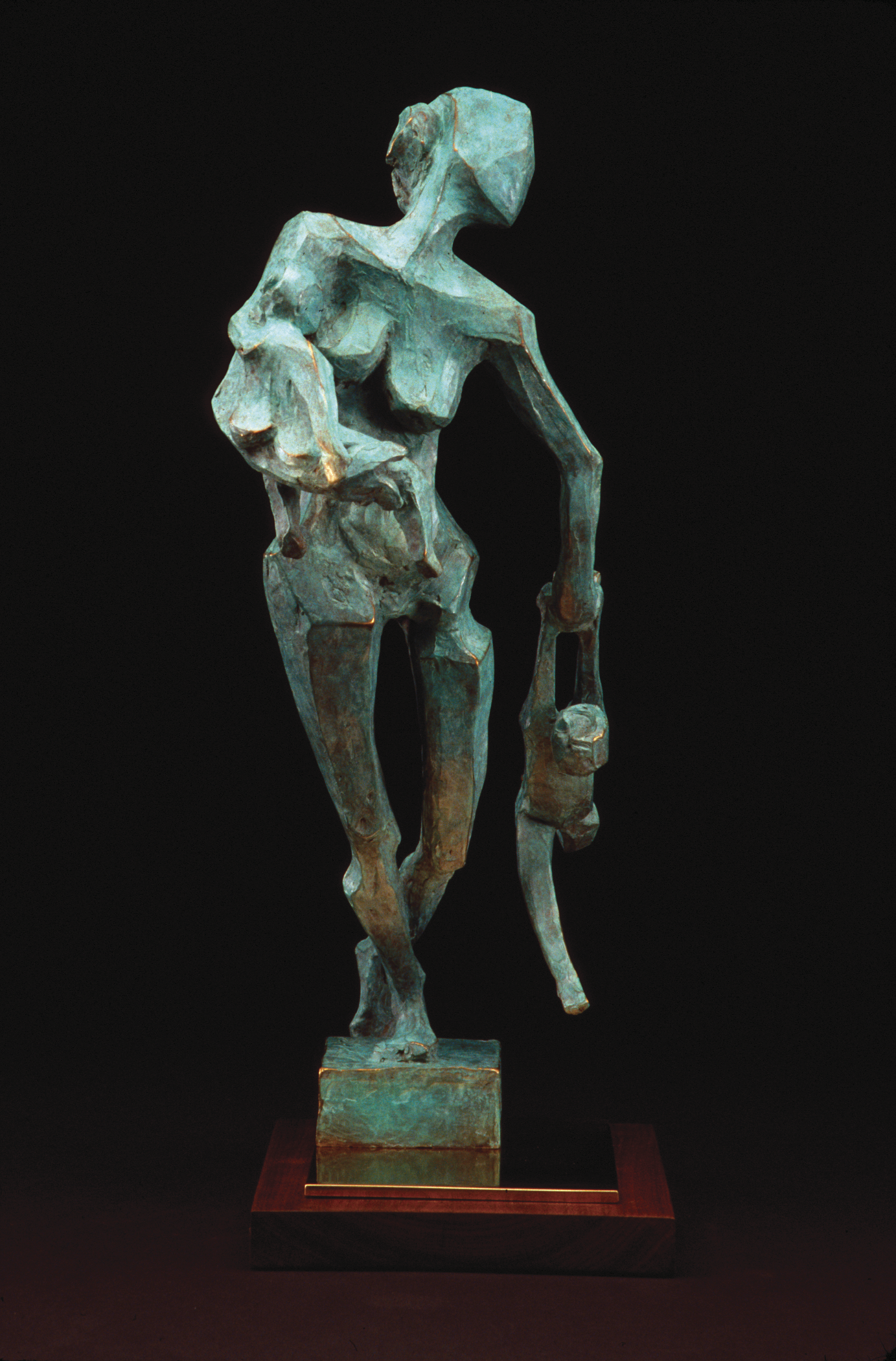 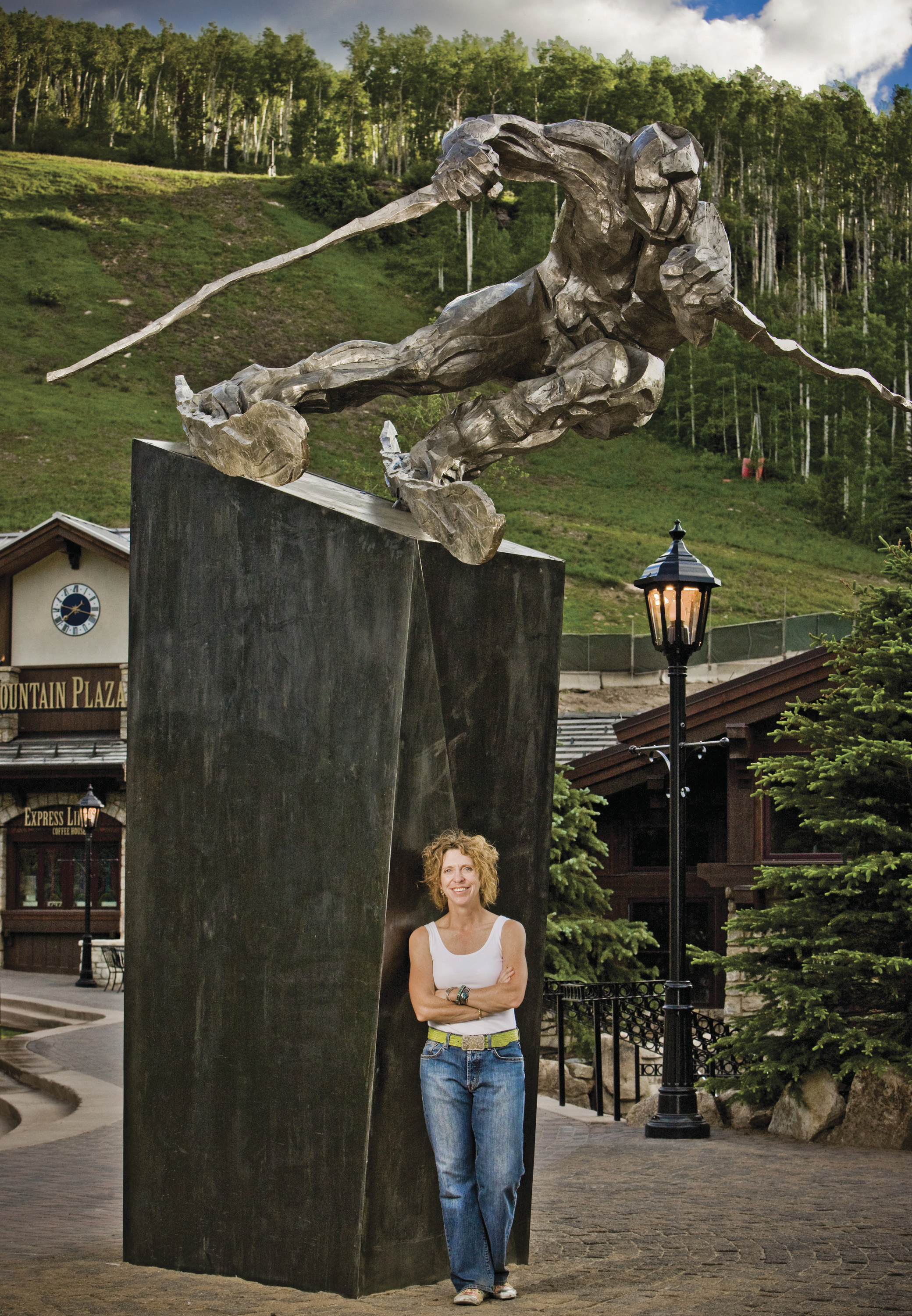 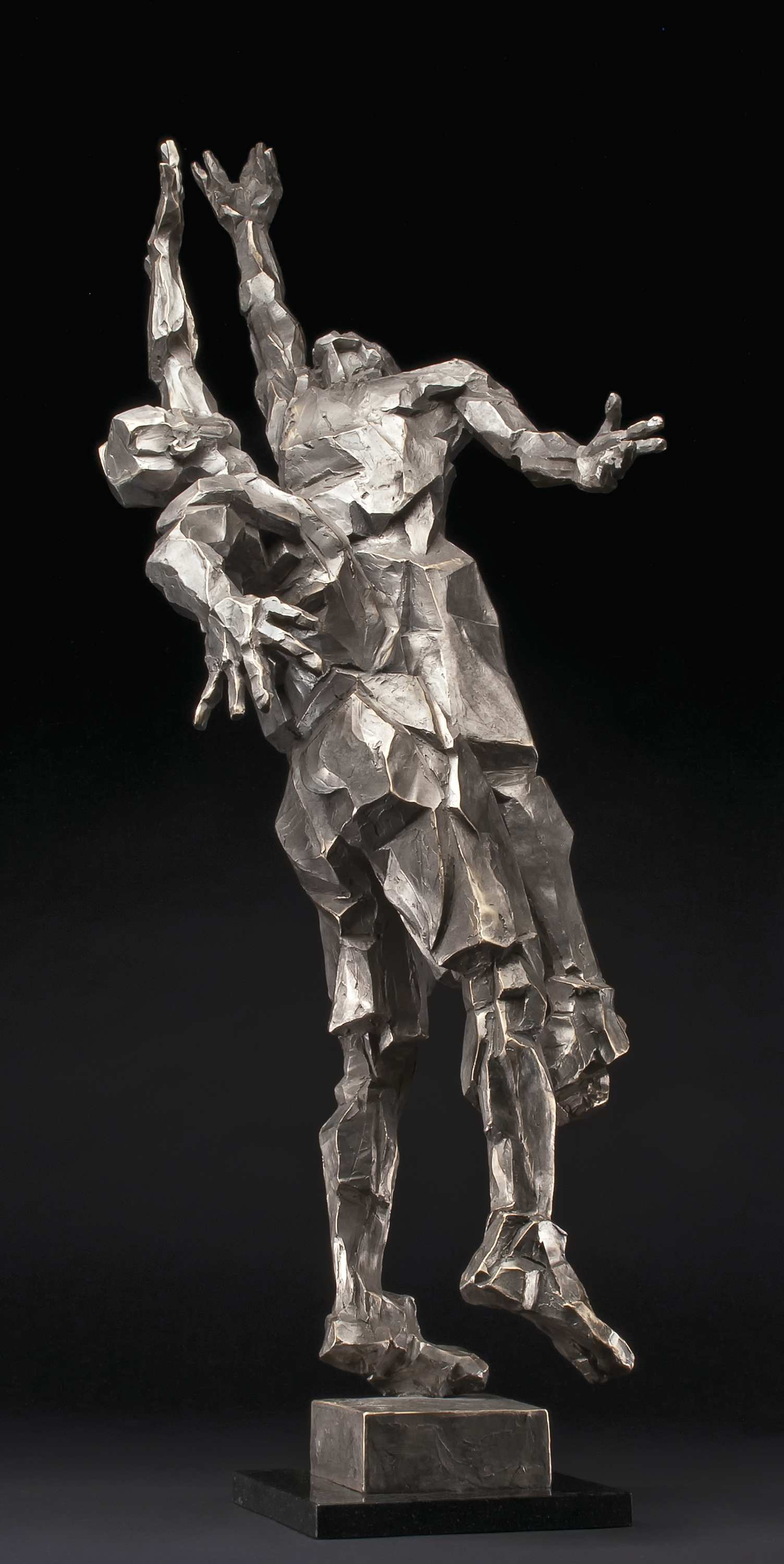 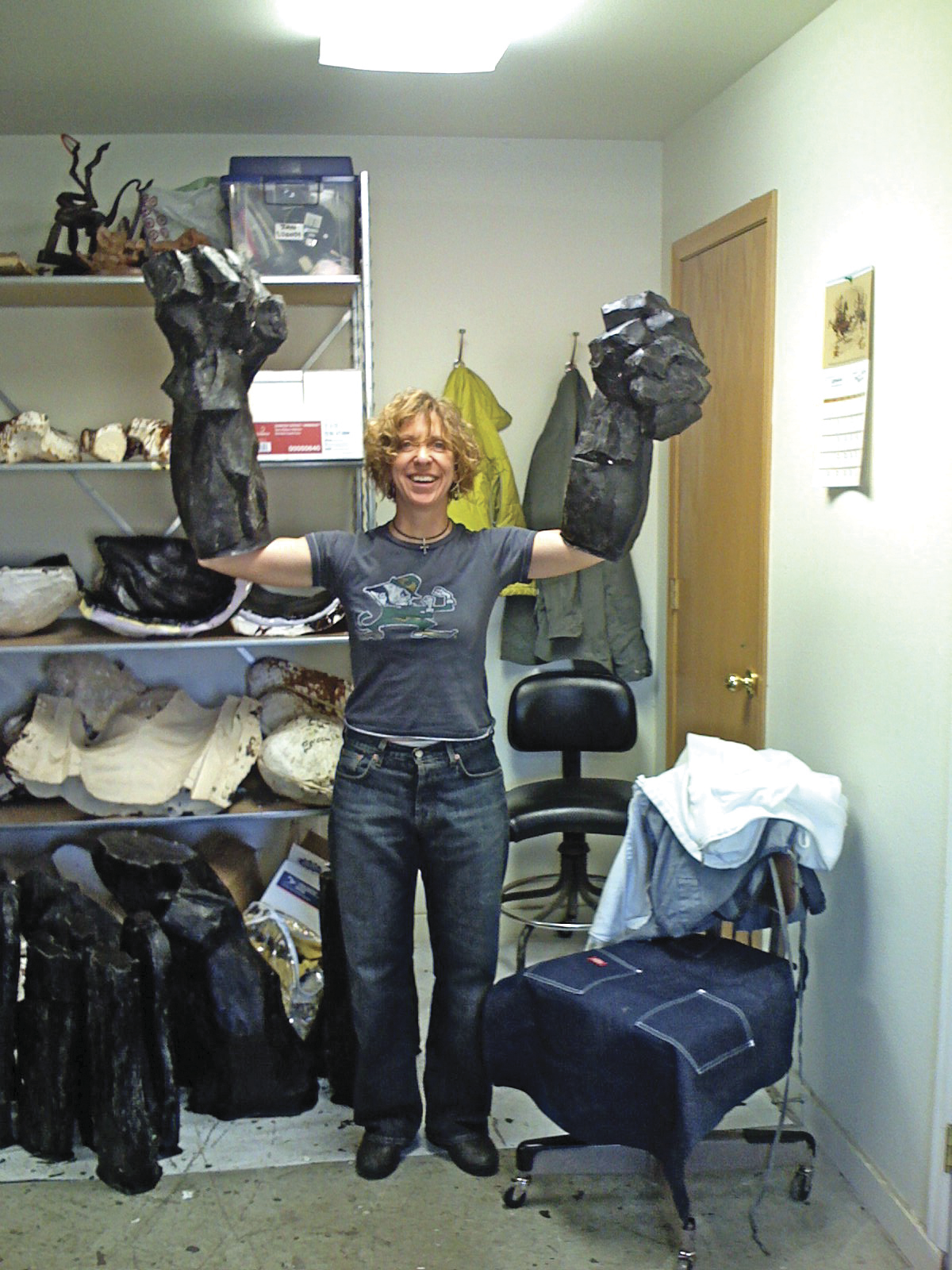 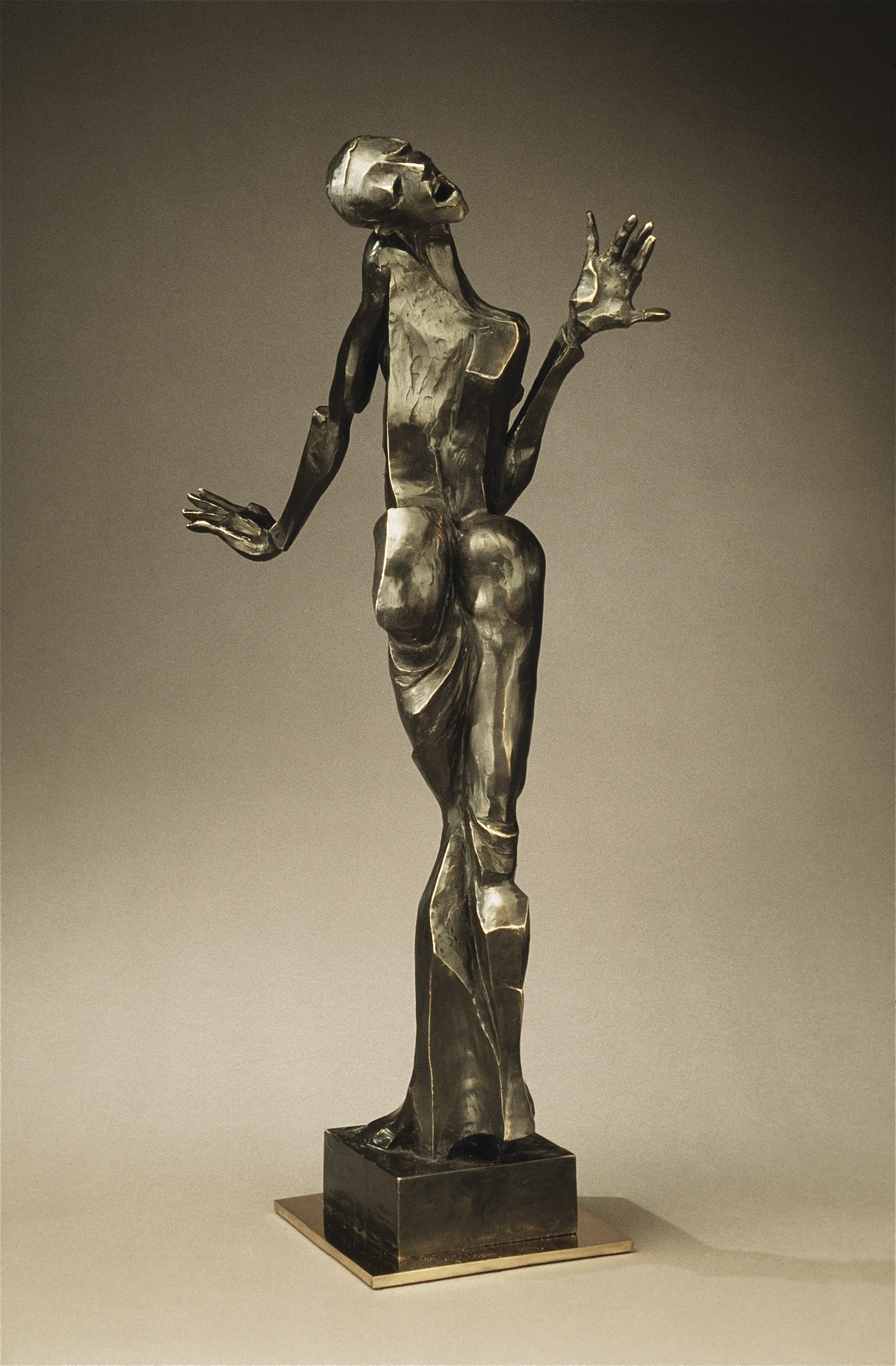