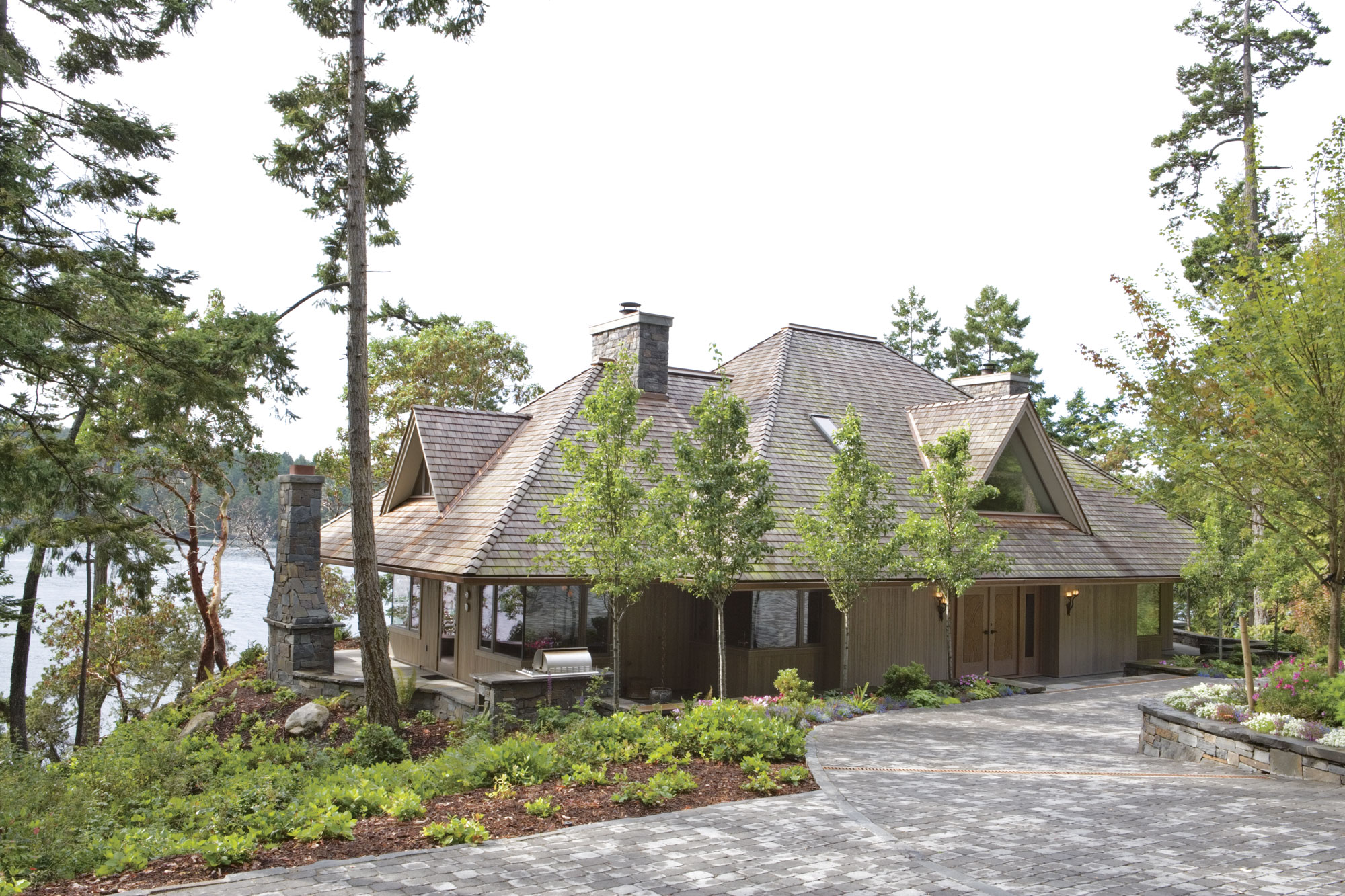 Set on a hill above Harney Channel, the Schulman residence establishes a balance between structure and landscape.

ORCAS ISLAND, PART OF THE SAN JUAN ARCHIPELAGO IN WASHINGTON'S PUGET SOUND, is a captivating destination that draws people in and holds them together. From rich conifer forests to rolling pastoral farmland, there is a freedom on the island as limitless as the vast waters that surround it — a spirit that cultivates the imagination of those who call it home.

A year after purchasing their first island home in 1994, Alan and Mary Schulman were introduced to architect Harlan Pederson. The serendipitous encounter led to a profound friendship and became the catalyst for the Schulmans’ acquisition of 17 acres of raw land above Harney Channel; a place where the home Pederson eventually designed for the Schulmans is just a stone’s throw from his own residence.

Today, nestled among the conifer and red-barked madrone, the couple’s 4,000-square-foot main house is artfully concealed by Pederson’s symmetrical design — focused around six triangular dormers and two stone chimneys — making it almost undetectable from the ferry.

“The islands are so wonderful in and of themselves,” says Pederson. “Here on Orcas is a unique opportunity to blend the house with the natural environment.” It was vital for Pederson, a minimalist by nature, to find balance between the structures and the landscape. To aid this process, Pederson enlisted the services of longtime friend and builder, David Will, one of many skilled craftsmen who joined the Schulmans in bringing the project to life.

“Everyone who worked here had input; nothing was set in stone,” explains Will.

“Harlan was like the pied piper with a group of ad-hoc craftsmen,” adds Alan.

To reach the property from the ferry-landing, a two-lane road meanders along boat-dotted inlets and pine-framed meadows. The eye catches — at Old Farm Road — on a brilliant green valley that stretches south over a tree-lined knoll and down to the shore.

A small carriage house, built with stones excavated from the property, appears much older than its few years. On the slope above sits the white two-story farmhouse where Pederson and his wife, Anne, live during their visits from Santa Barbara.

Beyond the low stone wall is a pole barn complete with studio and woodshop where Pederson and Alan built custom Adirondack chairs in 2007. The friends have spent hours in the second-story chart room where Pederson guides Alan in the ancient art of maritime navigation — skills put to good use in their days together at sea.

Over the ridge, the narrow road drops onto an overlook where the Schulmans’ residence is positioned parallel to the channel. A single glass pane in the triangular dormer reveals a vaulted foyer and hand-forged chandelier by Orcas metal-worker Steve Gropp; just one of the many details crafted for the Schulman home.

Pennsylvania Blue slate leads through the double-door entry — solid works of art intricately carved in the Haida tradition by local artist Walter Henderson. At the edge of the patio is another of Henderson’s carvings: a 23-foot totem pole perched above the sound.

The indigenous art of the Haida, known for the use of formline to depict nature, is a passion for the Schulmans. Traditional sculpture and carvings are displayed throughout the house. In the dining room, a kiln-formed glass boat, by Italian artist Lino Tagliapietra, uses sophisticated design to portray primitive form; and paintings by local artist David Ridgway rely on bold color and brush strokes to reveal simple island scenes.

Coffered ceilings of hemlock planks and floors of white Oregon ash complement the fireplaces that anchor the great room at each end. The space is set off by glass that meets at the corners and frames the wide seascape.

“One of the most amazing things about the way the house is situated is that from almost every angle, you see the water at eye level — a constant flow of life goes by and becomes a part of your living space,” says Alan.

Cabinetry by local woodworker Gary Sisson minimizes the need for furnishings. Sisson worked with Mary and the rest of the team to create distinctive built-ins, like the teak entertainment piece in the living room, using reclaimed wood.

During the building process, Mary acted as a remote project manager, exchanging images with David and interior designer Shannon Wehsener to ensure every detail of the interior matched with design specifications. “Harlan would draw a picture of his vision for the office and Shannon would create the detailed sketch,” explains Mary.

What began in 1999 as Harlan’s site plan on the back of a paper placemat at a local Chinese restaurant, is today the Schulmans’ idyllic retreat — complete with a fruit orchard, walking trails and subtle nuances like the stone stairway that leads to a private beach where tide pools form in the volcanic rock.

“The remarkable thing about David Will and Harlan Pederson,” says Alan, “is their ability to make dreams appear. The project was a unique collaboration that transcended each of our individual skills — greater than the sum of the parts.”

The embrace of all who greet him makes it clear that Harlan Pederson is an inspiration.

Born in Askov, Minnesota, in 1924, he came West as a boy and later joined the Merchant Marines. While searching for war boats north of Seattle in the late 1930s, Pederson saw cows and farms on an island in the San Juans. Deeply moved, he knew he would live here, but it would take another 46 years for his return.

At the University of Southern California, School of Architecture, Pederson and classmates often took a young underclassman, Frank Gehry, sailing. In 1957, Pederson began the Pasadena architectural firm of Pedersen, Beckhart, Wesley and Stice. A major re-model of Doris Day’s Beverly Hills estate was the firm’s first project leading to many successful years of residential and commercial architecture, including the design of the Union Rescue Mission in Los Angeles, recognized as an outstanding achievement by the American Institute of Architects.

After taking up flying at age 50, Pederson finally found the opportunity in 1983 to return to Orcas when he and his wife landed their Cessna on the island during a stopover on a trip to the Arctic. “We camped under the wing in a tent and were so taken with the island that we moved to a B&B until we could find a place to build a home,” recalls Pederson.

In the years since, Pederson has built seven homes on Orcas and continues to lead the design work for the rehabilitation of Four Winds, an 80-year old summer camp in Deer Harbor. For Pederson, life has been an adventure marked by the opportunity to bring out the beauty in all things. 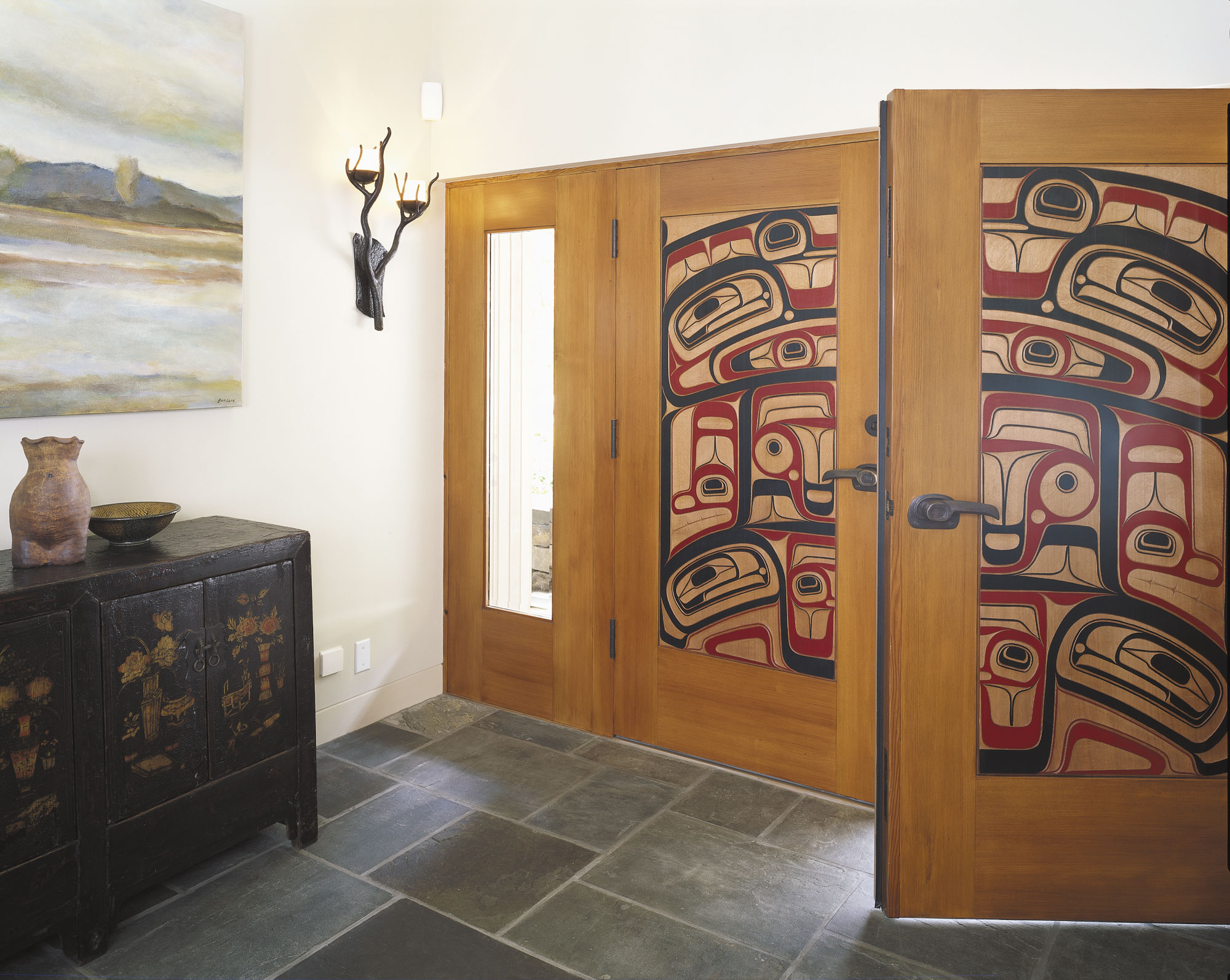 Local artist Walter Henderson used form and line to depict the eagle symbol of lineage in his design and carving of the front doors. 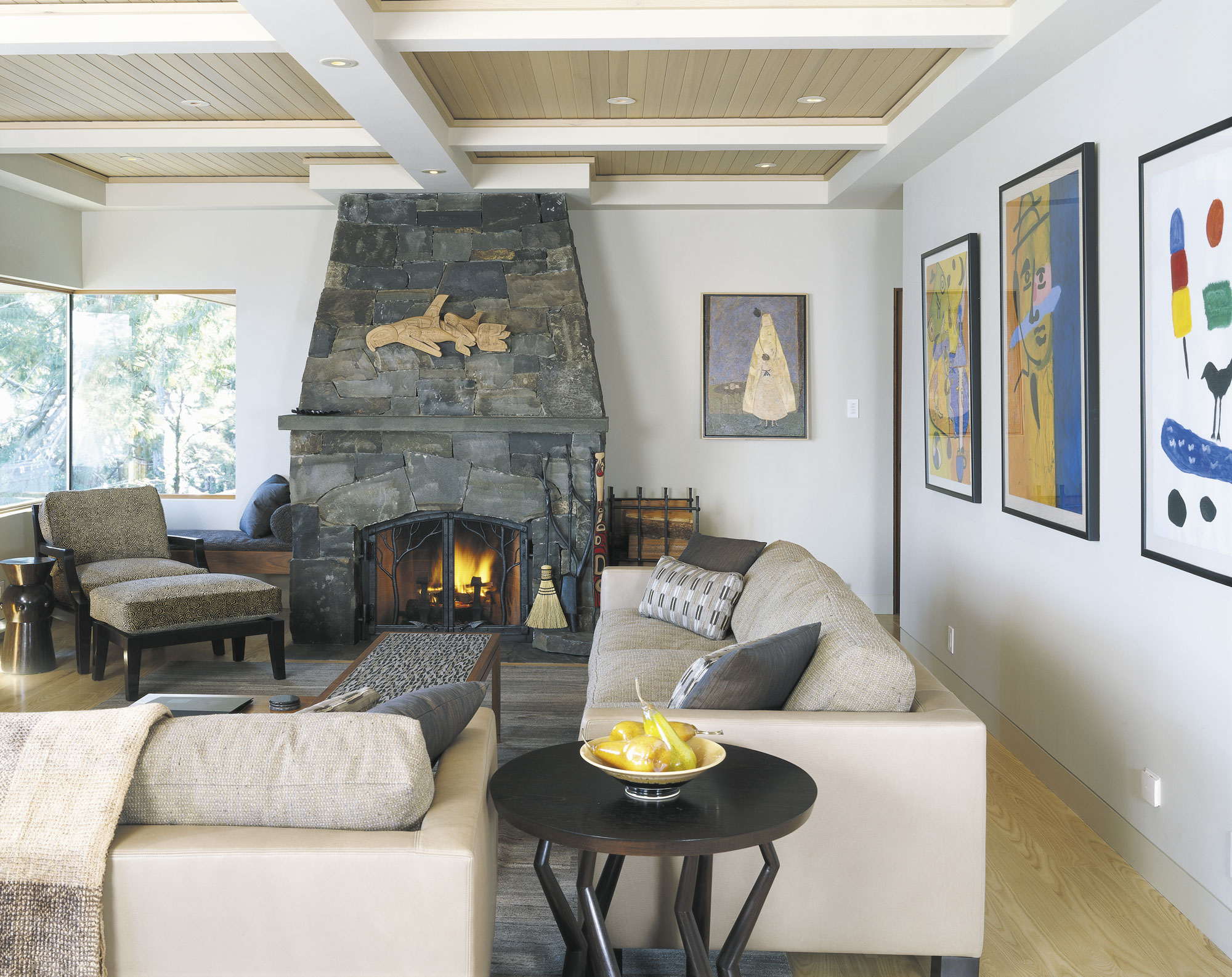 The living room space is set off by white walls that showcase pieces from the couple’s eclectic art collection on one side and glass walls that frame the seascape on the other. 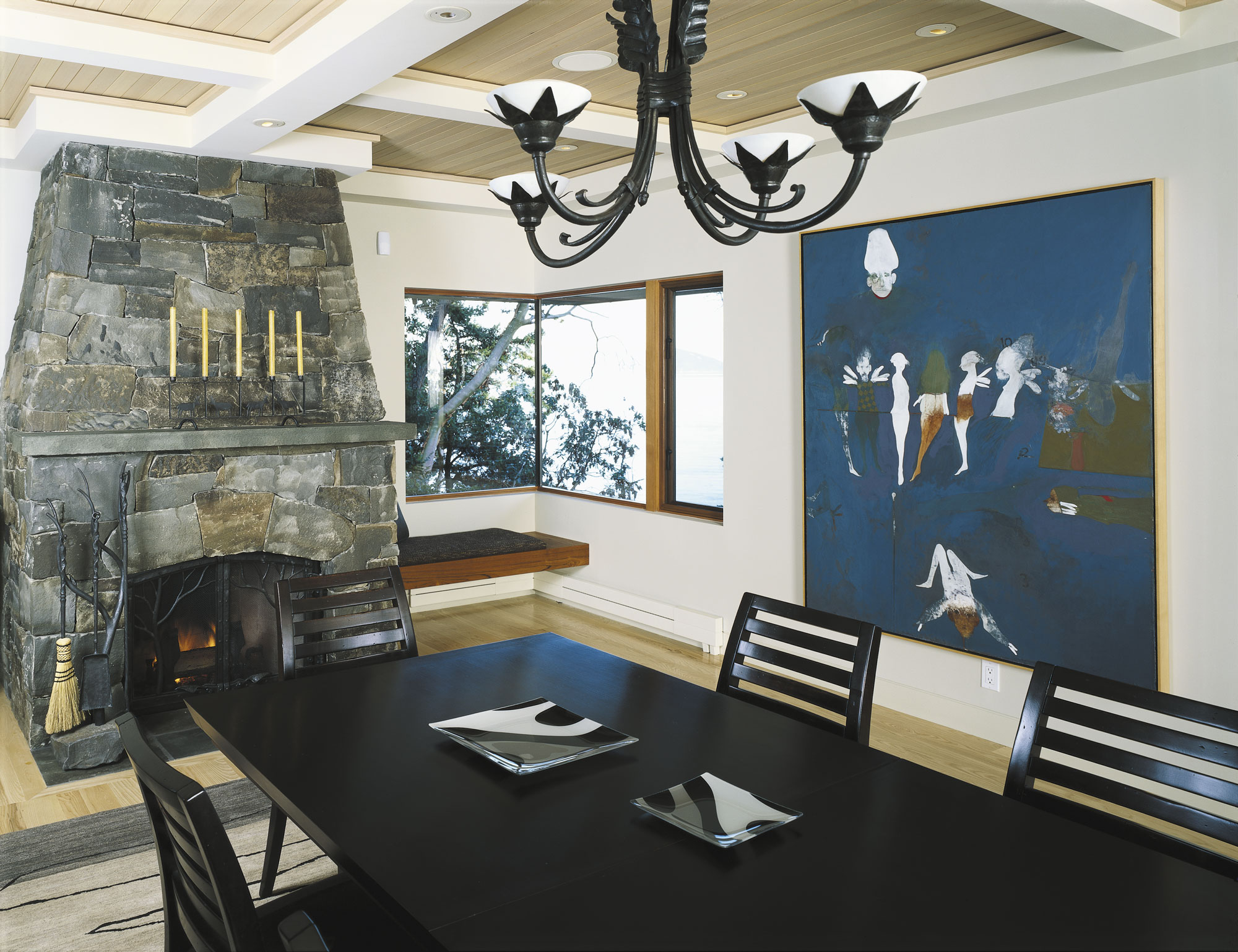 Mary Schulman describes their island visits as “down-to-earth family time,” one of the reasons for the large and inviting living space welcoming family and friends alike. 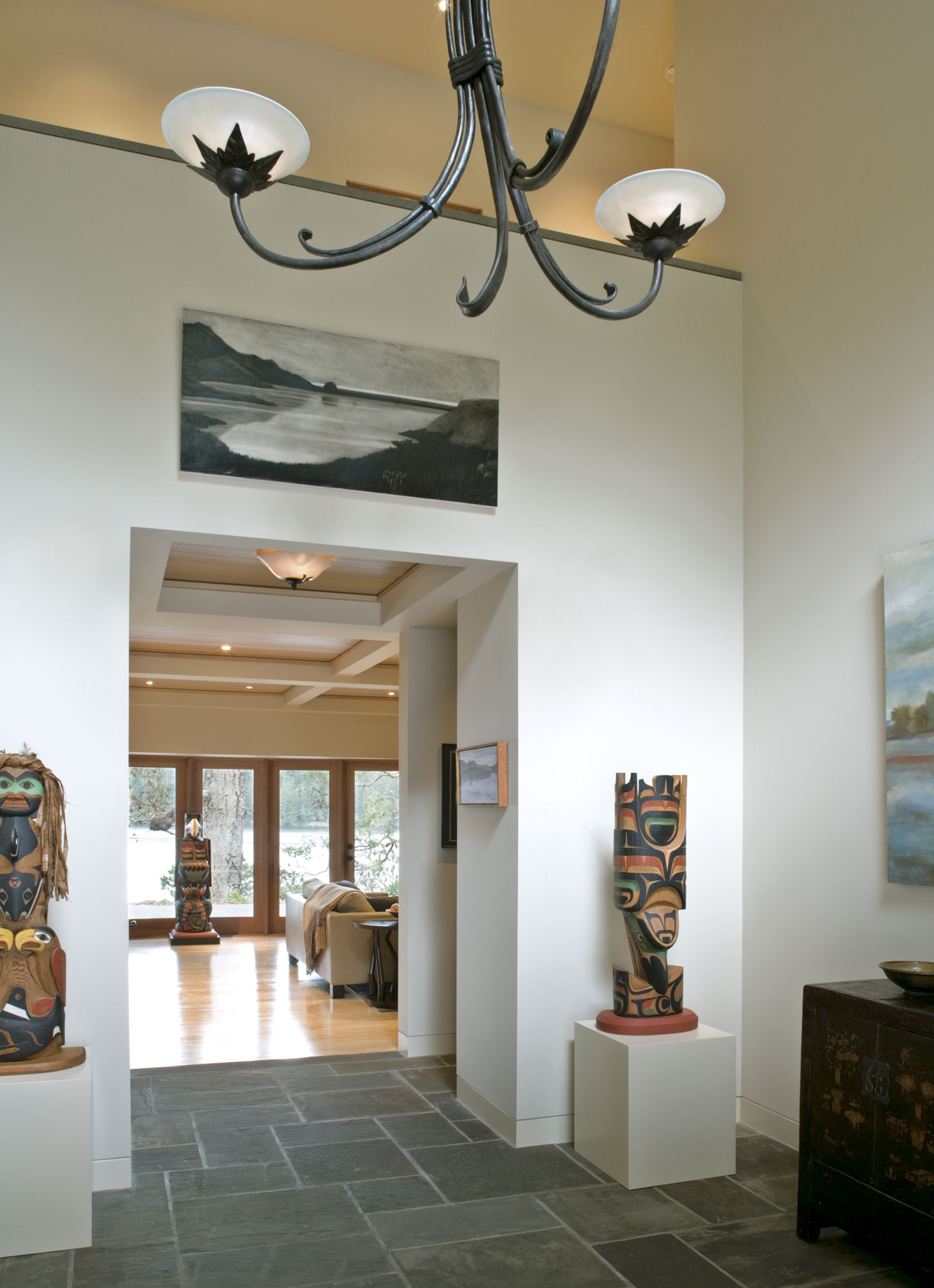 Art of the Haida people has long been a passion for the Schulmans and many of Pederson’s design elements were built around traditional totemic carvings. Hand-forged fixtures like the chandelier above the foyer were sculpted especially for the home by metalsmith Steve Gropp. 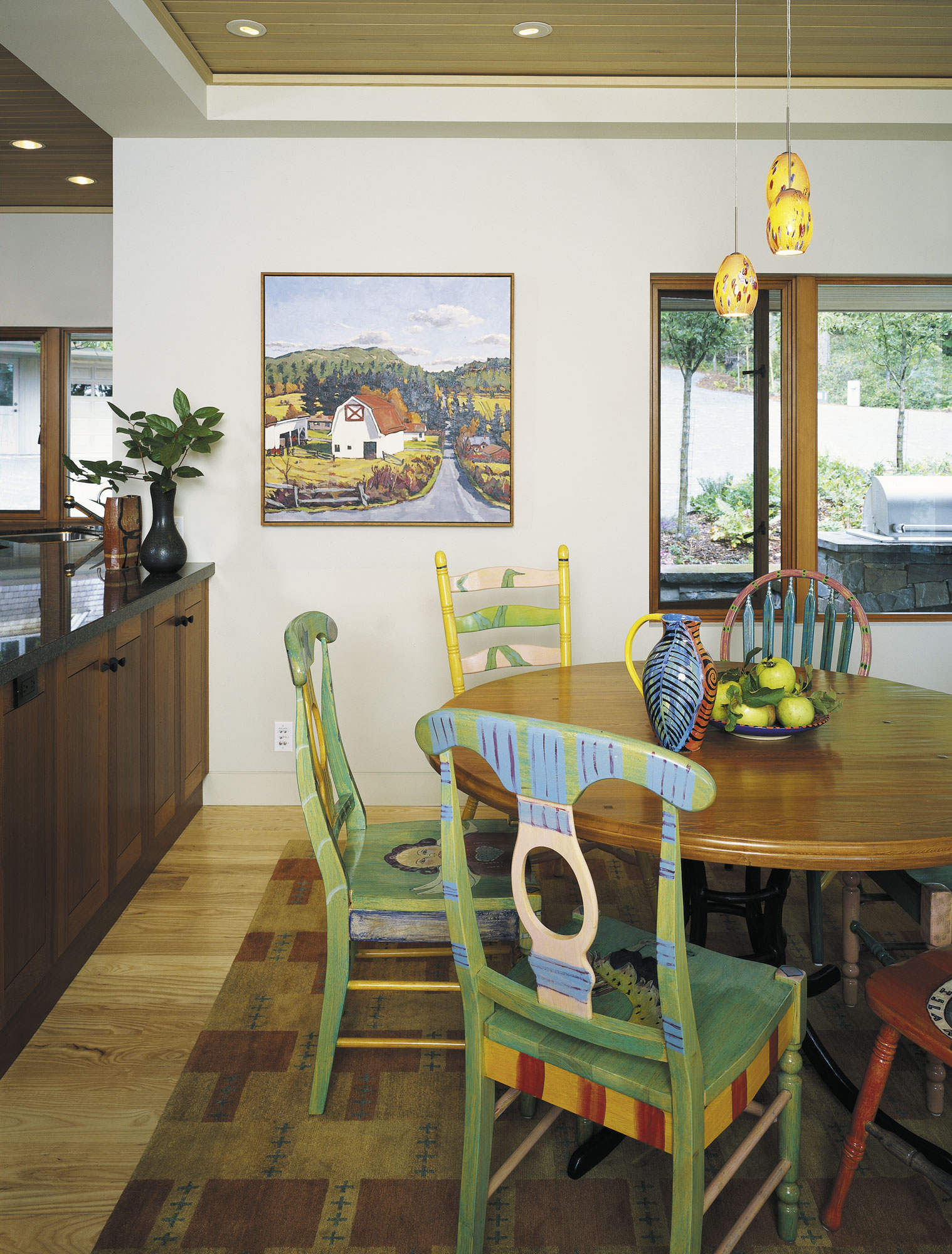 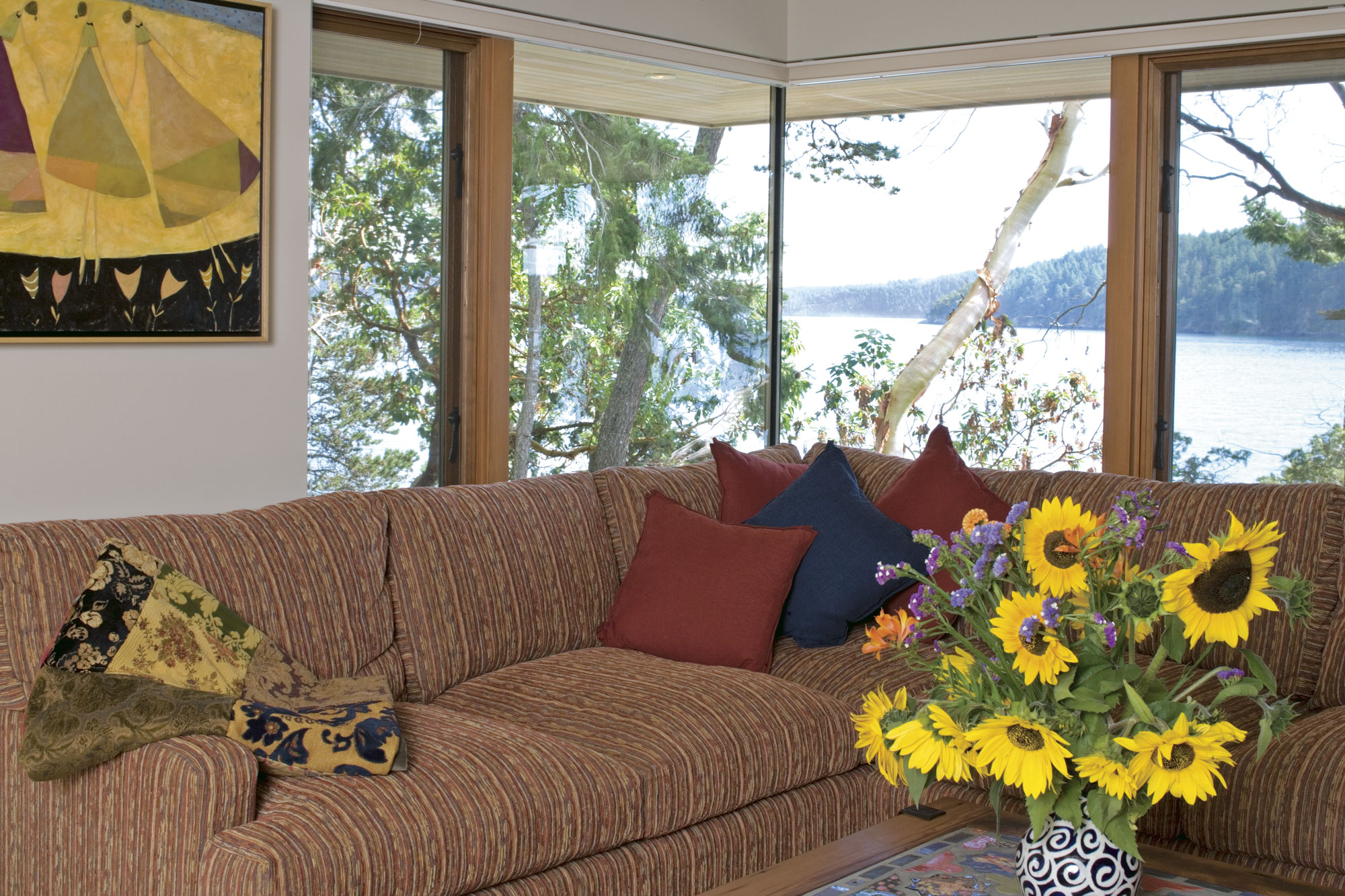 Though spaces like the kitchen nook are cozy, every inch of the home has been wired with state-of-the-art technology that adds to the ease and comfort of family getaways. 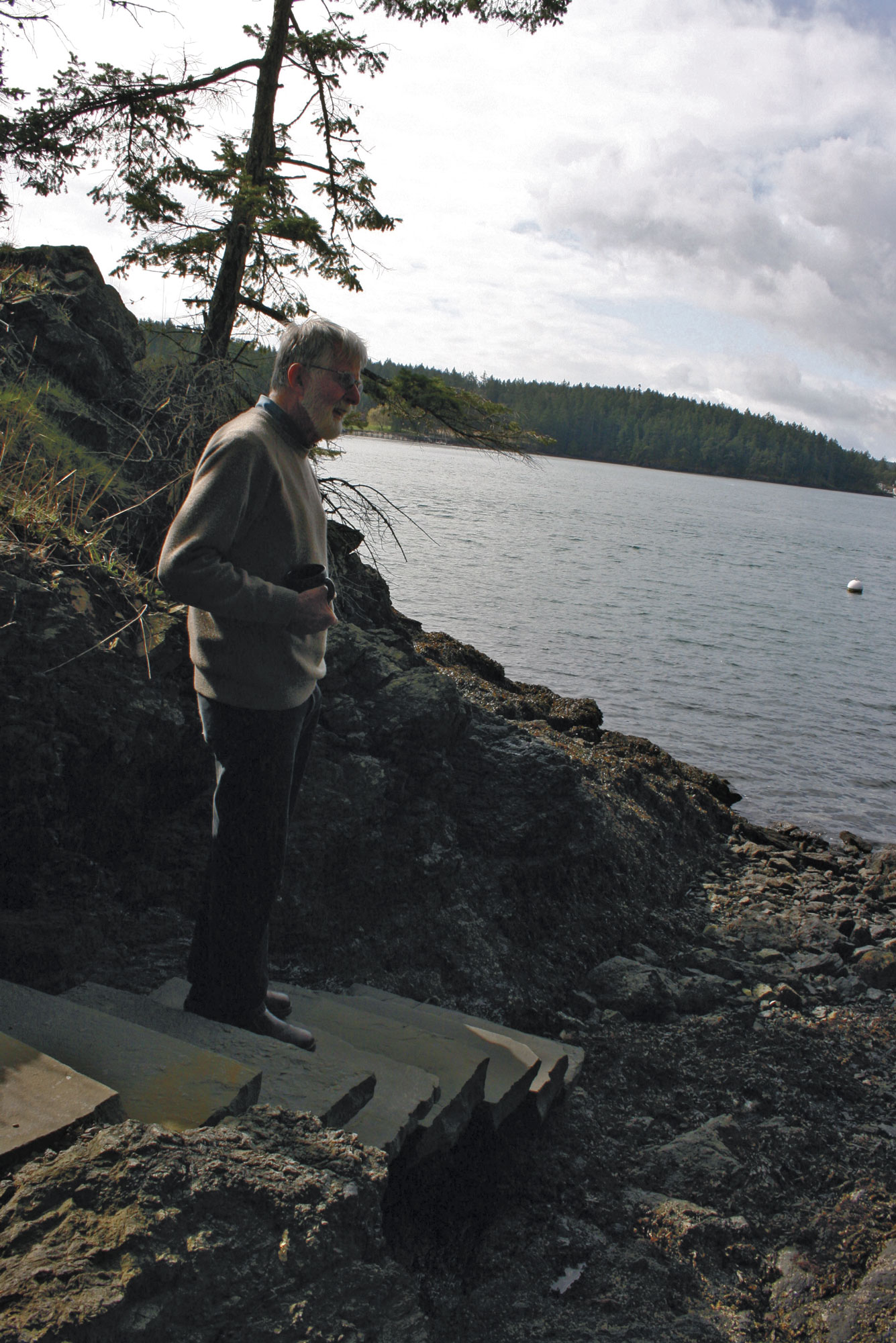 Architect Harlan Pederson pauses on the stone steps leading down to the water.