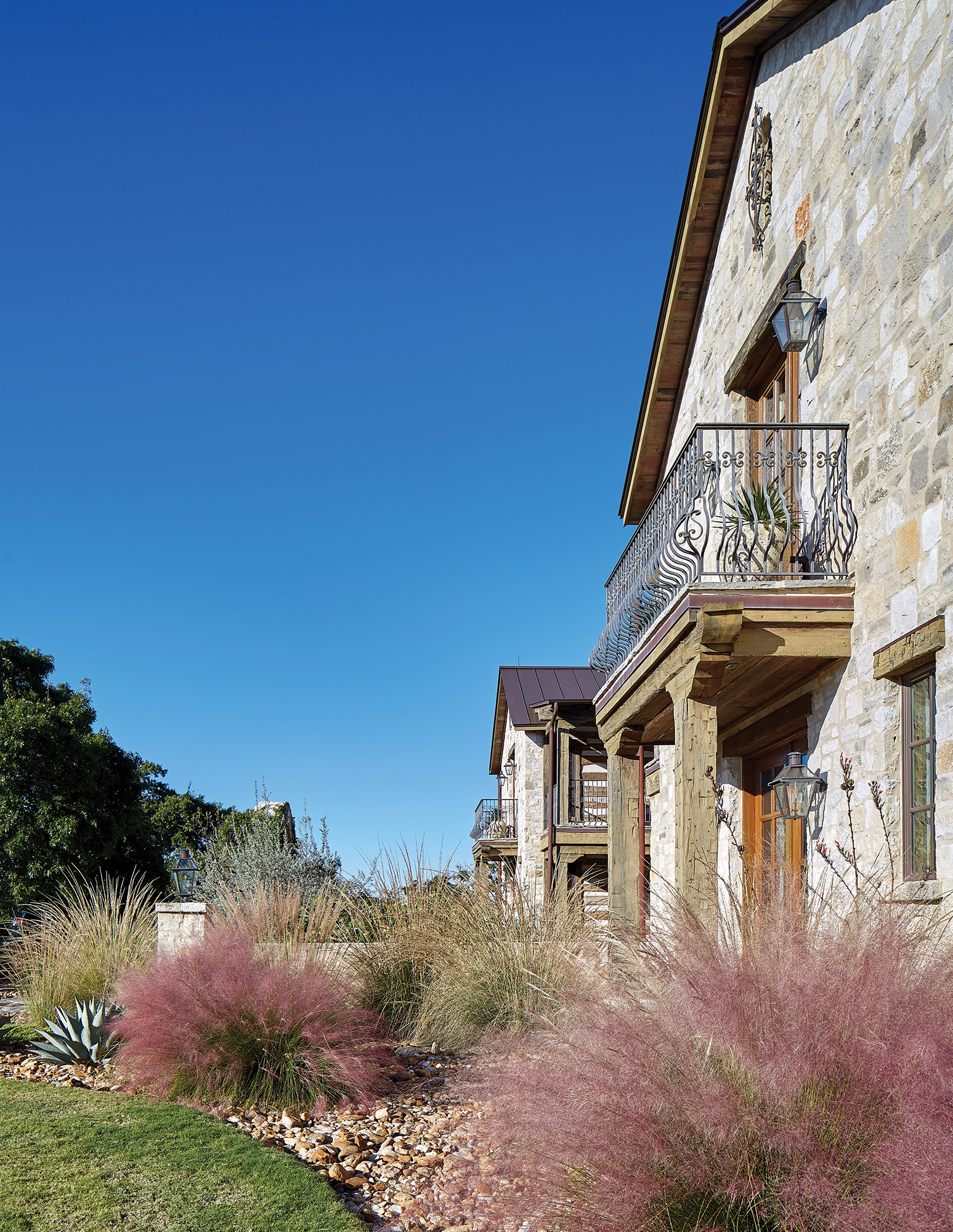 The façade of this two-story Texas Hill Country compound is native stone, hand-built on site by a master stonemason.

17 May Leaving a Legacy

WHEN MY HUSBAND AND I DECIDED TO BUILD THIS HOUSE,” says one of the homeowners about her native stone compound, “I didn’t want to do it.” The process of building would be time-consuming and interrupt her flourishing professional obligations. But fate has a way of interfering in people’s lives. The couple — he is in the oil business and she is a psychotherapist — had been looking to build a house somewhere away from their Shreveport, Louisiana, hometown. Taos, New Mexico, was an option and so was Texas Hill Country, near their three children, a fact that ultimately swayed the decision.

Even after they purchased a spectacular property north of Fredericksburg, the busy therapist still wasn’t convinced. Their land is one of the highest points in Gillespie County and is blessed with perhaps the most enviable view in Hill Country — a direct look at Enchanted Rock. The massive pink granite dome is the largest such formation in the United States and a mecca for rock climbers. As a Jungian psychologist, the homeowner pays attention to the importance of symbol. She sought guidance about the house-to-be from two favorite sources — nature and the Bible. “I went to the top of our property and opened the Bible,” she says. The pages fell open at Matthew 7:24, a passage about the wise man who built his house on a rock. “I knew we had to build the house.”

Just how far-reaching her conviction was became obvious when the industrious professional stopped working to devote all her time to planning the residence. “I wanted to do this project right,” the therapist says. She assembled a stellar Lone Star team that included architect Cary Kipp of Kipp Flores Architects from Austin; builder Jim Donaldson from Fredericksburg; and designer Amy Slaughter also from Fredericksburg.

Donaldson, a boutique builder who only works on one project at a time, grasped the significance of the couple’s goal. “This was a legacy project,” he says. “The homeowners wanted their house to look like it had been there for a 100 years and that it would also be there a 100 years from now.”

Part of that legacy, of course, meant the compound needed to accommodate family. There would be a 3,000-square-foot main house with two stories, one bedroom and one bath, a space the homeowners could take care of themselves. For their children, a pair of two-story casitas would form a courtyard by connecting to the main house with expansive porches. “This is a house that I expect my family to use forever,” the therapist explains.

They also wanted the compound to reflect the region’s ancestry. In this part of Texas, three cultures were dominant 150 years ago. “My client needed a home that revealed the Indian, Mexican and German influences in Hill Country,” says Amy Slaughter, who worked with the homeowner, scouring the country for furniture and information. They found early photographs from the Smithsonian Institute of local Kiowa and Comanche Indians wearing paisley printed trade cloth. “We copied those prints and used them in the curtains and some upholstery in the house,” says Slaughter, who paired the prints with vintage Pendleton blankets and cowhide rugs.

The exterior of the house was assembled with just as much consideration for history. The homeowners insisted on employing traditional tradespeople such as masons, carpenters, painters and welders to endow their home with handcrafted authenticity. “Each rock that went into the house’s façade was hand-cut on site,” says Donaldson. “The biggest challenge was to merge the vintage materials with the new.” None of the old doors were plumb, for instance, and all had to be painstakingly leveled for functionality. New windows received the same meticulous attention but in reverse; the painting team carefully distressed them to look well-worn.

As old as the house looks, its state-of-the-art systems rely on the tried and true. “The house runs on rainwater,” explains the builder, and it also draws 50 to 100 gallons per day of condensation from the five air conditioning and heating units. That was enough to keep the receptacle bin full during a recent drought.

The combination of efficiency and imagination is evident in this dwelling that has become the full-time residence for the busy couple who stopped everything to create it. If there were such a thing as a magic time machine, the homeowners could expect to return to their house in a 100 years to find their legacy alive and well. It also wouldn’t surprise the loving parents to discover that the home would still be inhabited by family members. 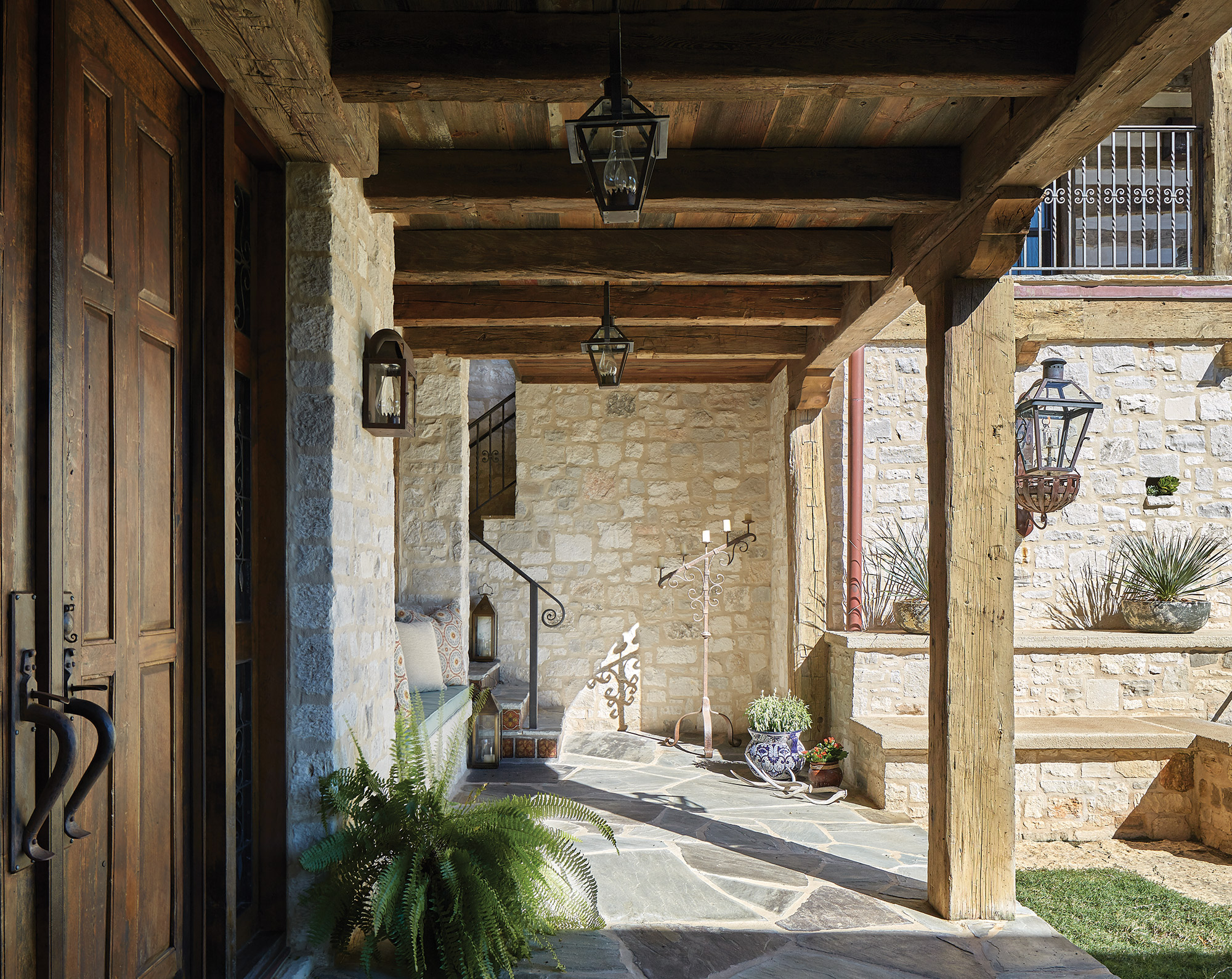 Inside the courtyard, porches are laid with irregular slabs of Silver Mist flagstone. The doors are Spanish antiques and the beams above are reclaimed wood. 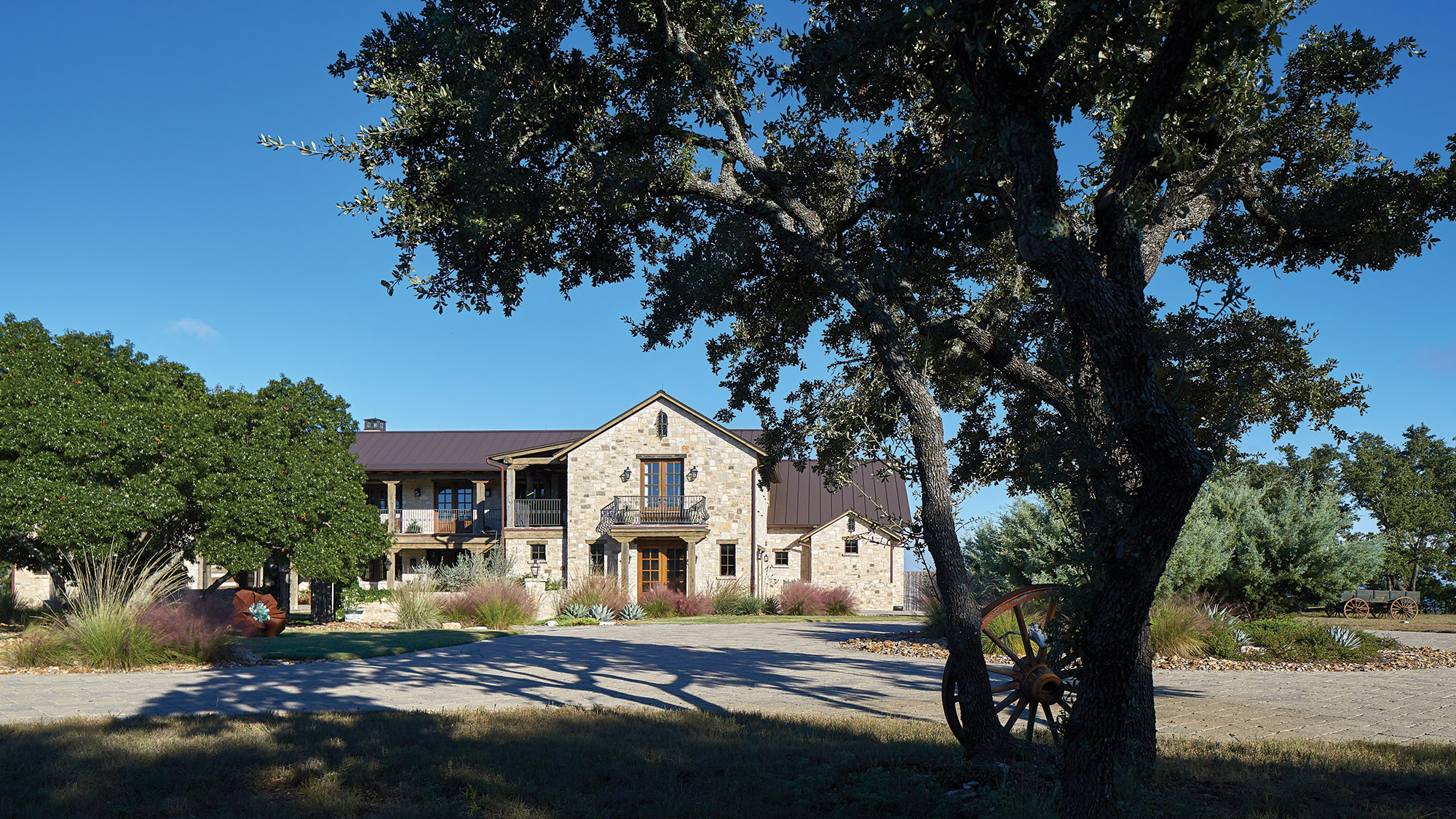 The homeowners sited their house to maximize access to the Hill Country view by day and starry skies at night. 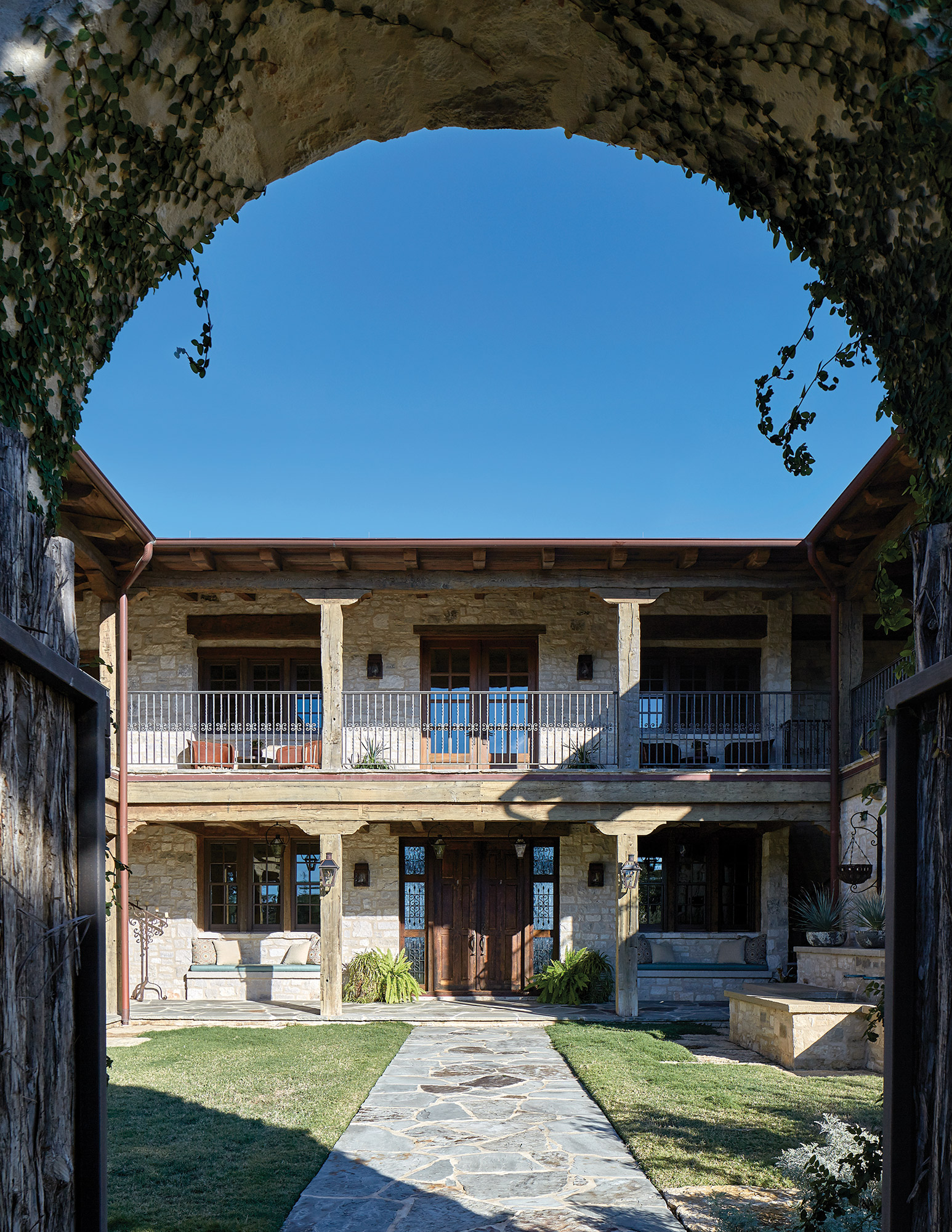 In the courtyard, landscape architect Joe Cross adhered to the homeowners’ desire to keep things simple and to use only native plants. 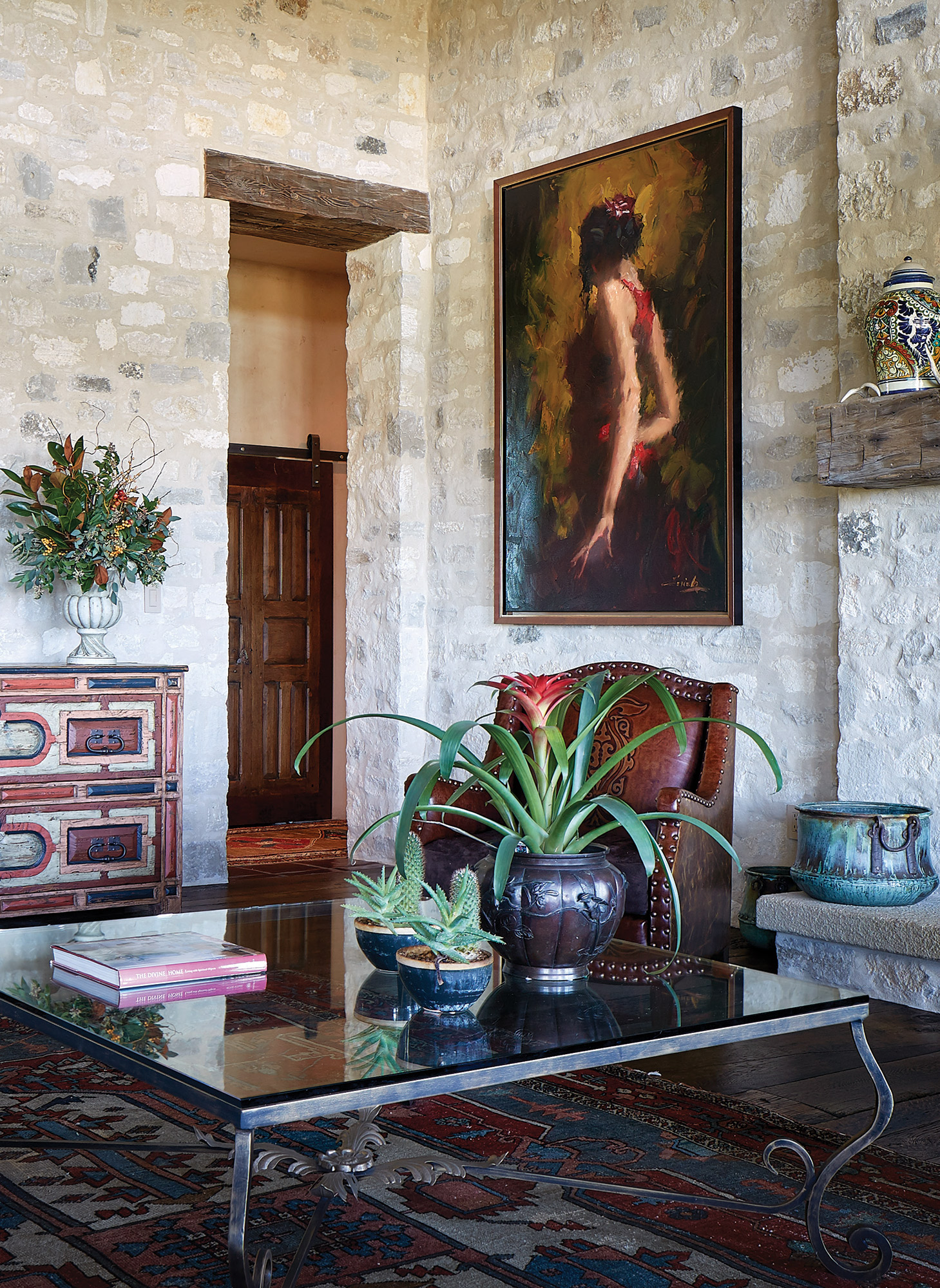 Designer Amy Slaughter collected antique Spanish and French pieces for the house, such as the 17th-century Spanish Colonial coffee table in the living room. 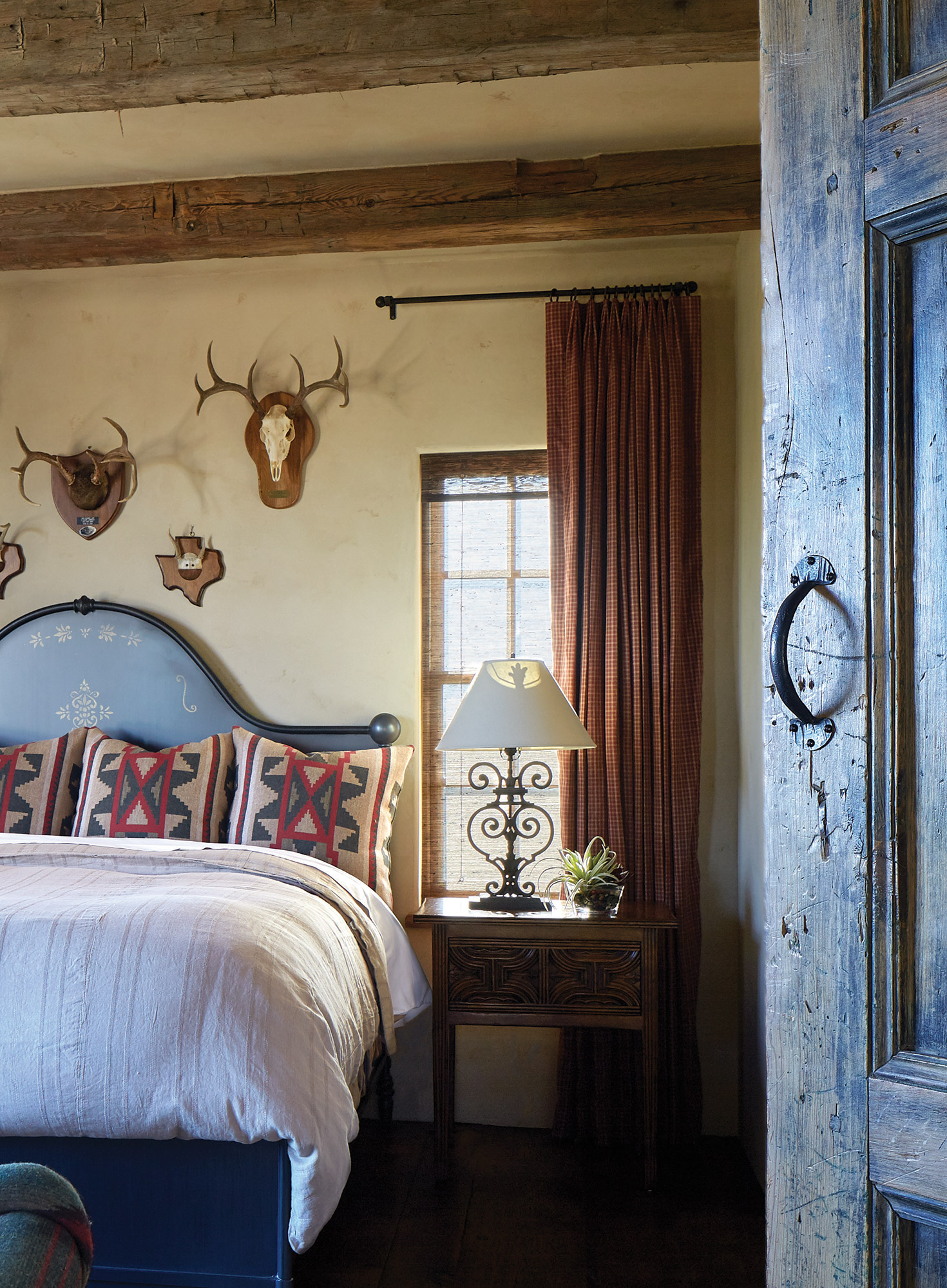 Plaster walls in a bedroom add luminosity to the rustic space. 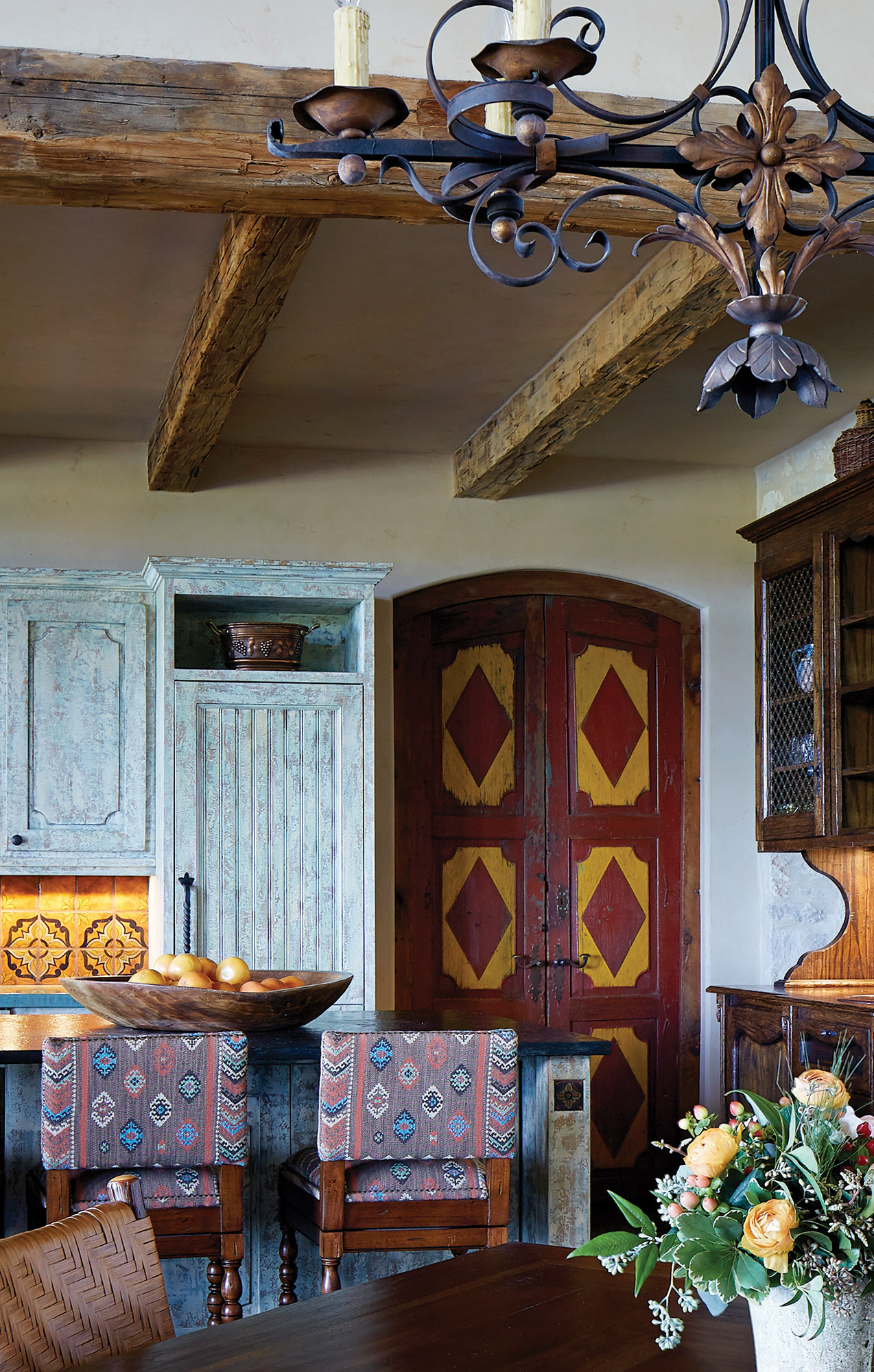 Custom kitchen cabinets were distressed to look old and to fit in stylistically with antique pieces such as the painted Mexican Colonial doors; all of the tile in the house was handmade in Carmel, California. 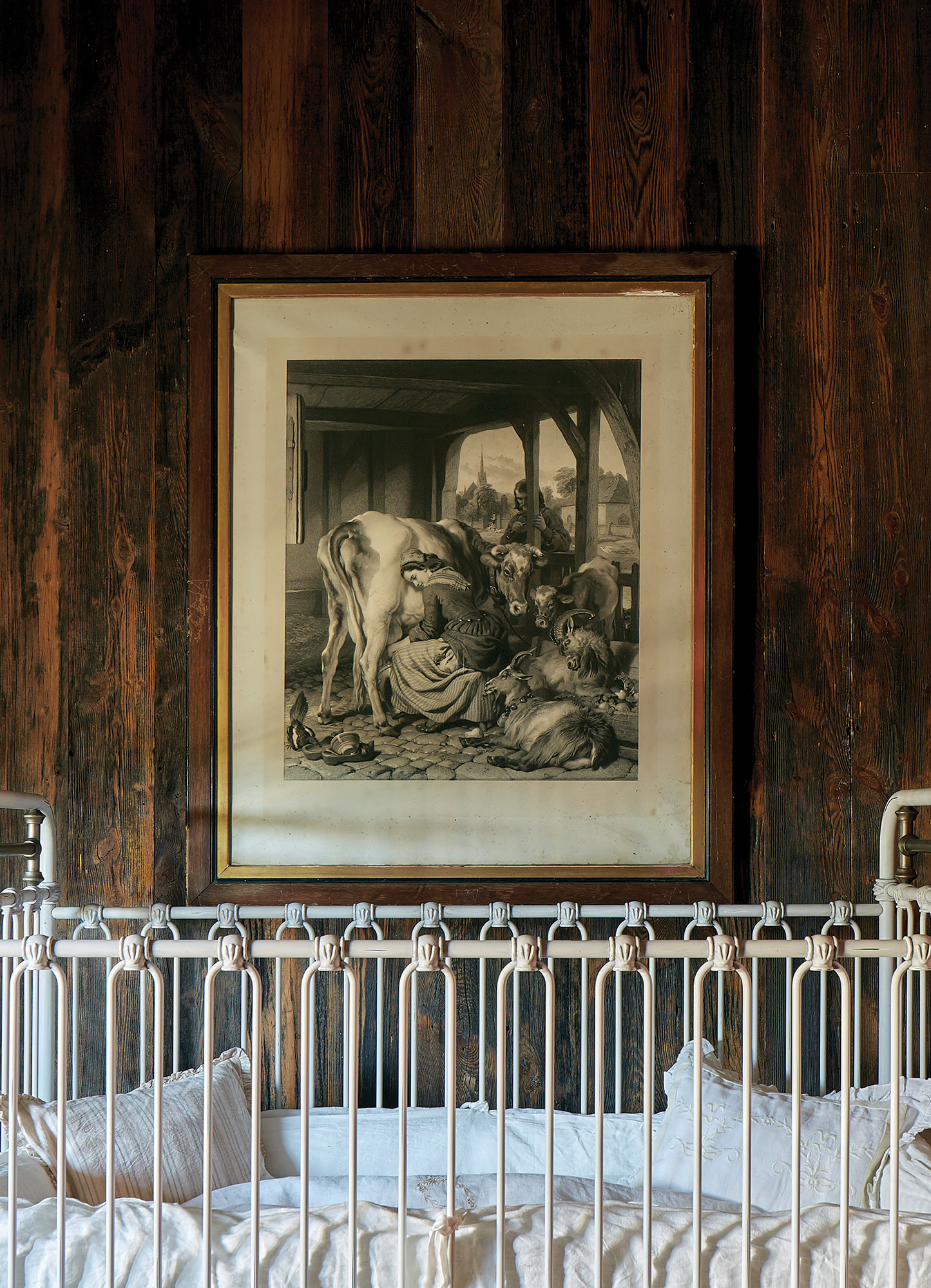 Walls in a child’s room in one of the two casitas are made of reclaimed wood. The ornate iron crib is an antique. 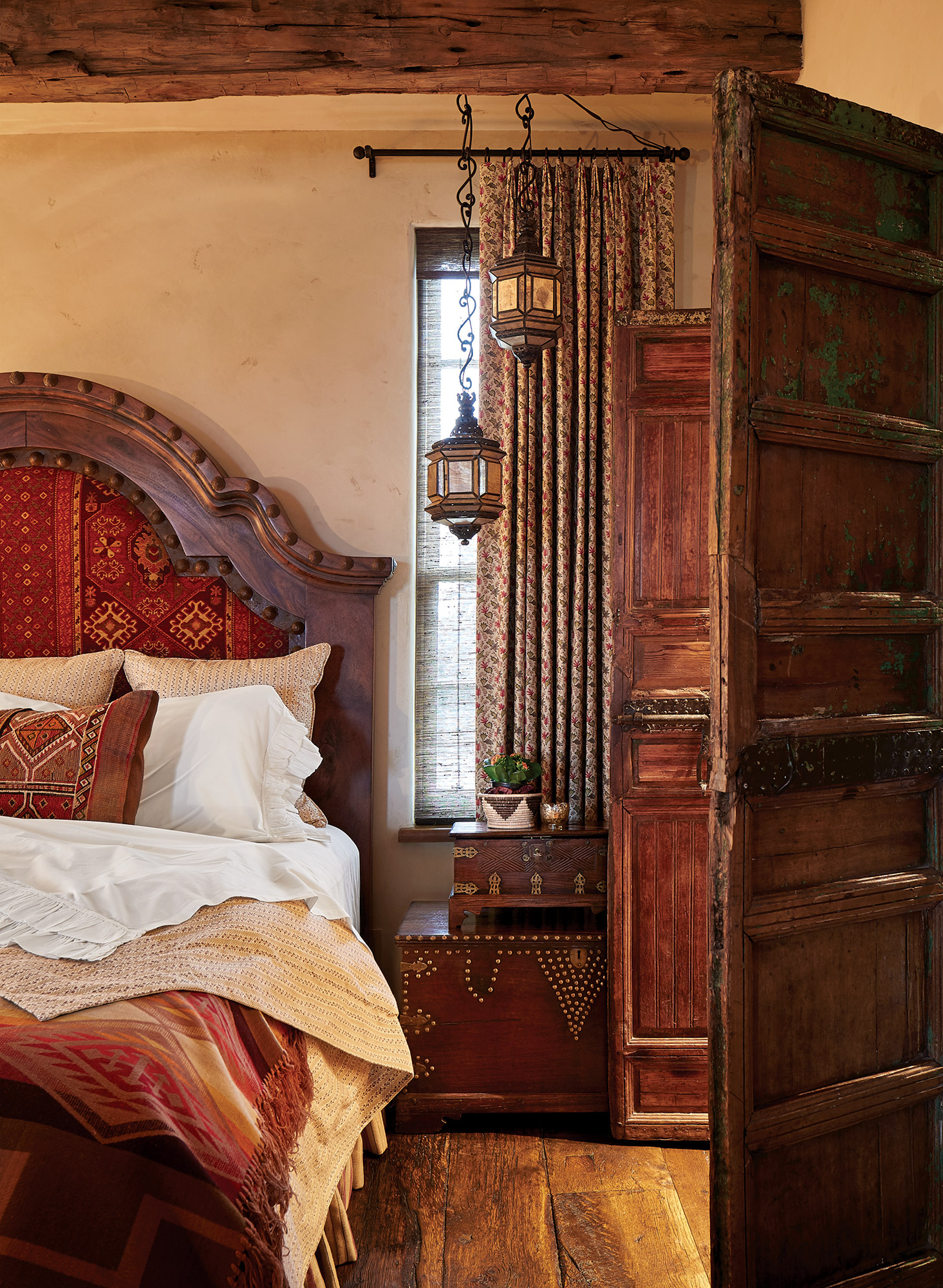