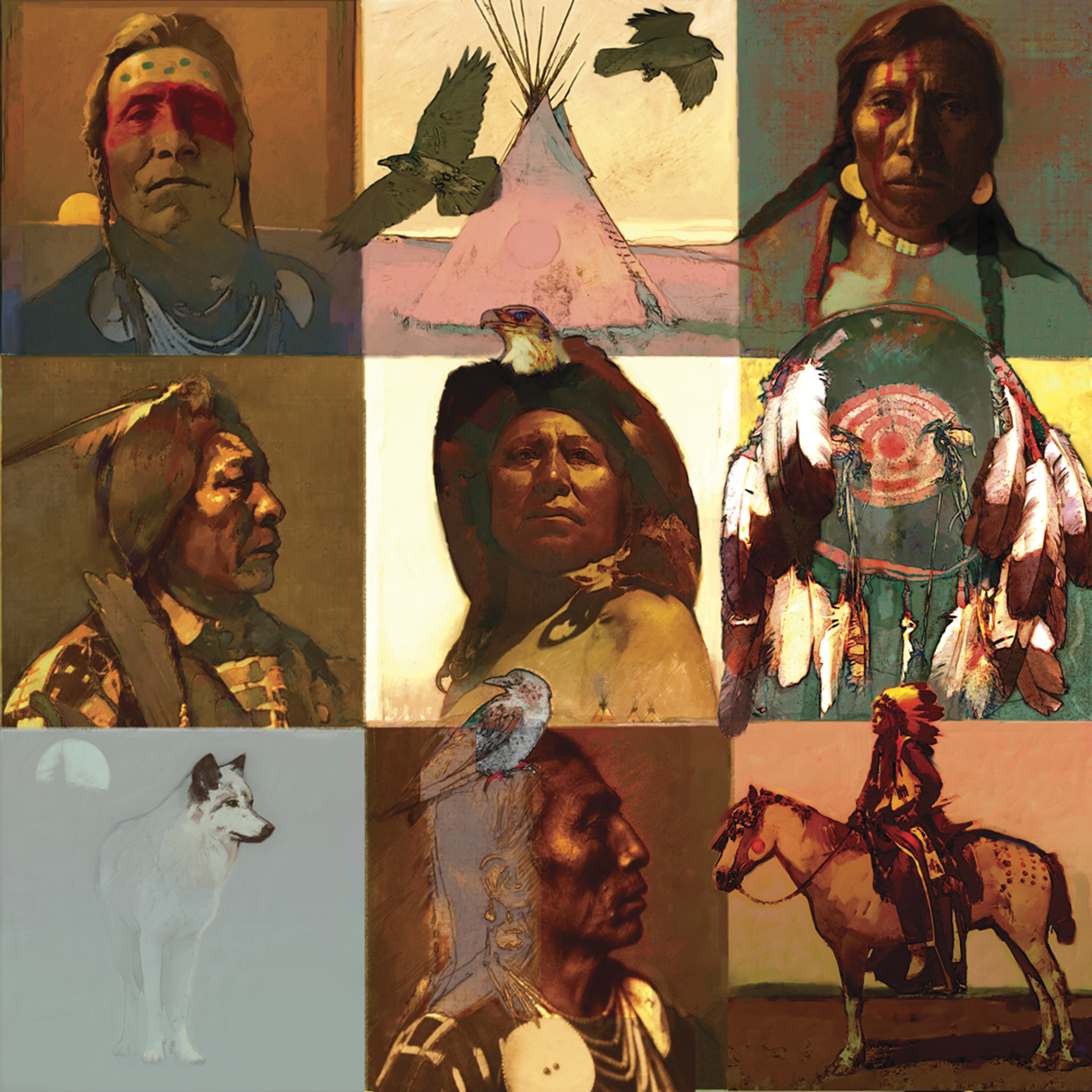 R. TOM GILLEON'S WAR AND PEACE IS A NINE-STORY EPIC, an ennead that would make even Leo Tolstoy proud given the scope of its range. This visual tome, created by the painter who long ago adopted Montana as his home, covers a climactic sweep of Western indigenous history. Inculcated with symbolism, it sighs for a past that is no more, addresses the juxtaposition between seeking peace through appeasement and battling to defend one’s own turf, and it invites us, in our 21st-century world, to engage in shared cultural remembrance.

From face-painted visages of warriors to feathers adorning a war shield and animal harbingers represented by magpies, ravens and lone wolves, the massive 60-by-60-inch oil is yet another expression of Gilleon’s iconography. Along with his widely recognized and perhaps best-known exploration of tipi motifs, Gilleon’s nine-panel “grid paintings” have become his signatures.

At a time when many observers are complaining about the rigid monotony of subject matter that has come to define Western art, Gilleon’s disregard for these unspoken rules serves as a counterpoint.

For art collectors the question is often posed: What is the fundamental threshold an artist must cross before she or he is considered great in a way that will stand the test of time? To some, the easiest metric used for forming an opinion is performance at auction. Using that rendered gavel price as a measurement of “investment value” in some cases is an unreliable determiner of status.

One gauge still held up as the gold standard for predicting an artist’s posterity is the willingness of normally cautious museums to stage retrospectives for living artists.

For Gilleon, that moment of critical validation arrived in 2012 with a major one-man exhibition held at the Booth Museum of the American West near Atlanta. This summer, the C.M. Russell Museum in Great Falls, Montana, is hosting its own Gilleon solo retrospective, highlighting three-dozen major works borrowed from private collections. The showing, Let Icons Be Icons: The Art of Tom Gilleon, opens August 14, 2013, and runs through mid-December.

Although Gilleon has been featured in numerous one-man gallery shows, this is his first museum exhibition in Montana. Sarah Burt, the Russell Museum’s chief curator, notes that though it is rare for her institution to single out living artists, Gilleon’s body of work, the regard he commands and his provocative reinterpretation of Western imagery make his formal recognition deserved and poignant.

“Technically speaking, Gilleon’s a brilliant colorist. And he uses color in unusual ways to communicate the heroic qualities of Western themes, so that they are seen in new and refreshing ways,” Burt says.

Mark Tarrant, owner of Altamira Fine Art in Jackson, Wyoming, describes Gilleon as one of the leading figures in Western contemporary art. “Gilleon is a master of composition and palette. His style produces an immediacy of impact on the viewer,” Tarrant says. “A Gilleon painting commands a room; there is an energy that gets projected, like the sun in the sky.”

Seth Hopkins, executive director of the Booth Museum, argues that Gilleon represents a new chapter in the time-honored tradition of former illustrators gaining renown as fine artists in the West. “Gilleon rejects portions of this tradition,” Hopkins says. “Rather than create highly illustrative and highly detailed works that provide a narrative story, Gilleon works to reduce detail and create hauntingly vacant compositions focusing on monumental Western shapes like tipis and grain elevators, in some ways reminiscent of the work of Edward Hopper.”

Across America today, hundreds of private collectors have original Gilleon tipis and nine-panels above the fireplace mantel, on the walls of great rooms and adorning living spaces and dining rooms.

Van Kirke Nelson, whose family has operated Glacier Gallery in Kalispell, Montana, since 1969, says that 100 years from now he is certain that Gilleon will be recalled with the same reverence afforded the Taos artists of a century ago. Nelson says he first became entranced by Gilleon’s work after he saw a showing of 12 small format tipi paintings years ago. Clustered together on a gallery wall, the sight was mesmerizing, yet each piece was exquisitely distinct.

“Each little painting had its own impact and could stand alone, but as a grouping you could really see how Tom is a genius at approaching color,” Nelson says.

That other artists are attempting to emulate him, Nelson says, demonstrates Gilleon’s influence on both colleagues and the market.

Gilleon’s first tipi painting, the artist admits, wasn’t deliberate. It was born as an exercise to loosen up for another work he was contemplating. He laid down graphite lines and then brushstrokes. As the paint flowed it progressed into a large work that immediately sold to a prominent tourist guest lodge near Big Sky, Montana, triggering in turn an avalanche of requests for more that has persisted since the 1990s.

I asked Gilleon, “Why tipis?”

The word itself, he says, is a Lakota term meaning, “where the people live.” Gilleon’s fascination with the impermanent structures, as objects of personal reflection, is no accident. They’re muses for thinking about mobile America, individual expression, the material talismans in modern life and, as someone who studied architecture at the University of Florida, they’re the ultimate mobile dwellings.

Tipis are also, he adds, authentically American and as universally recognizable as the Egyptian pyramids. As an artist, they enable him to explore the fundamental elements of painting: striving to achieve color harmony through light, shadow and value, affecting mood by choice of palette, and incorporating age-old concepts about geometry into composition and design.

The tipi is no trope. Like the surface of water, everchanging and influenced by wondrous atmospherics from above, absorbing light or casting it outward, being a receptacle for human thoughts and emotions cast upon it, welcoming the viewer to enter, Gilleon’s tipi paintings are, in a way, not literally about tipis at all.

Nor should it be said, though some have contended as much, that Gilleon is some kind of neo-Western pop artist. Sarah Burt, of the Russell, notes that Gilleon’s approach to icons is markedly different from, say, the intent of Andy Warhol, who championed a modern iconography focused on the superficiality of celebrity, the power of commercial brands and the hands-off approaches of mass production based upon a cartoonish extension of photo-realism. In that context, pop art was an homage to artifice.

Gilleon is a true painter, a stylist, Burt says, and he is after something that verges upon the sacred. “Honesty is not a policy, it is a principle,” Gilleon says. “In general terms, people have thought of ‘Western art’ as art about white men dealing with horses and cattle or white men dealing with Indians. And yes, for many years it was. Today I think there is more emphasis on the land and all the inhabitants of the West, including its fantastic wildlife.”

In describing the evolution in his thinking and the catalyst that transformed him from approaching subjects literally to more allegorically, Gilleon reflects on his career as a Disney illustrator and speaks of his friendship with Herb Ryman, Disney’s first full-time artist and a generation his senior. “One day long ago when we were working from a human model that had ordinary features, Herb said to me: ‘We have the option to make the drawing look like her or we can make it beautiful.’ Apparently I had dropped back to the artist default position of copying what I saw, essentially like being a courtroom artist covering a trial.”

Indeed, embellishment as a quest to transform the ordinary into the beautiful is a Gilleon hallmark, be it experimenting with banded color backdrops, featuring iconoclastic full-frame portraits of native folk heroes, or invoking wildlife on tipis like North American hieroglyphs, reminding viewers that the relationship between nature and humanity is indivisible.

Reached at his Montana studio, Gilleon says that he works intuitively. One could even call his approach freewheeling. “I do not normally create a painting in a ‘linear’ point A to point B to point C manner,” he explains. “Often the painting begins without a predetermined outcome, so when a storyline or narrative is attached, it is most likely a backstory.”

It’s a process that he learned as a member of the vaunted Disney creative teams. “It is a valid and very effective creative tool and I worked this way for many years. I now feel I can fly untethered and let the wind carry me in directions I would probably not think to take.”

Gilleon believes that many Western artists fall into a similar trap of literalness. “Artists that strive to be historically accurate in clothing, weapons, horses and models have my highest admiration, but for me it involves the option of whether I’m making the tipi look real or striving to convey a deeper essence,” he explains.

Altamira’s Tarrant says that Gilleon, at 71, is at the top of his observational power. “Many people think the change in an aging artist’s ‘style’ is due to a deterioration of eyesight, or a shaky hand or loss of stamina … some of that happens, of course, but I feel I know why so many artists’ ‘painting hand’ changed with old age,” Gilleon says.

“For many years my goal was to improve my technical skills, to improve the brushstroke, refine the color sense and compositions, to become a ‘master artist.’ That goal has changed. I want each brushstroke to be more like me … a little unfinished, a little naïve, a little crude, sometimes whimsical but mostly honest. In short, to be the artist I was when I was only 5 years old, but with a larger perspective on the world.”

In the beginning, he says, he never aspired to achieve fame. He had no idea that the subject matter would have such resonance. Today, he is easing off his output of works bound for galleries and focusing on requests from museums.

One of those, a potent nine-panel titled Northern Plains, was commissioned by the Booth Museum as the centerpiece of the 2012 retrospective. It remains a popular fixture in the Booth’s expanded gallery space. Seth Hopkins, the Booth’s executive director, said commissioning of Northern Plains could be interpreted as a statement that the museum believes Gilleon is among a small group of living painters moving contemporary Western art forward. If the response to the exhibition among Booth visitors and patrons is any indication, Hopkins’ assessment has been mightily corroborated.

Tarrant, who has seen hundreds of Gilleons, says the grid painting War and Peace ranks as his personal favorite. The masterwork was completed for a one-man show in 2005 and is one of several highlighted at the 2013 Russell exhibition.

Gilleon has never sought to “fit in” as a Western artist, conforming to the arguably out-of-date expectations of what the genre is supposed to be. “The term ‘Western artist’ limits everything it touches,” Gilleon says. “I paint ‘Western subjects’ because I live in the West and love it. But I would be just as happy painting seascapes and Gloucester fishing boats, fishing villages around Rockport or Plymouth. From there, I could move to Paris and paint bridges over the Seine or the scenes around Montmartre. I could also be very happy ending my painting days in the south of Ireland.”

Gilleon’s point: Paint what surrounds you, live where you love to be, let the rhythms, seen and unseen, seep into the soul multidimensionally and, if you have the inclination, paint aspects of it that bring you closer to the truth of a place. For him, indigenousness, as an original reflection of human relationships with Western geography, is the platform from which his unforgettable meditations are sprung.

Editors Note: For complete coverage on Tom Gilleon, visit us online at www.westernartandarchitecture.com.

Todd Wilkinson has been a journalist for the last 25 years and is author of the new book, Last Stand: Ted Turner’s Quest to Save a Troubled Planet. 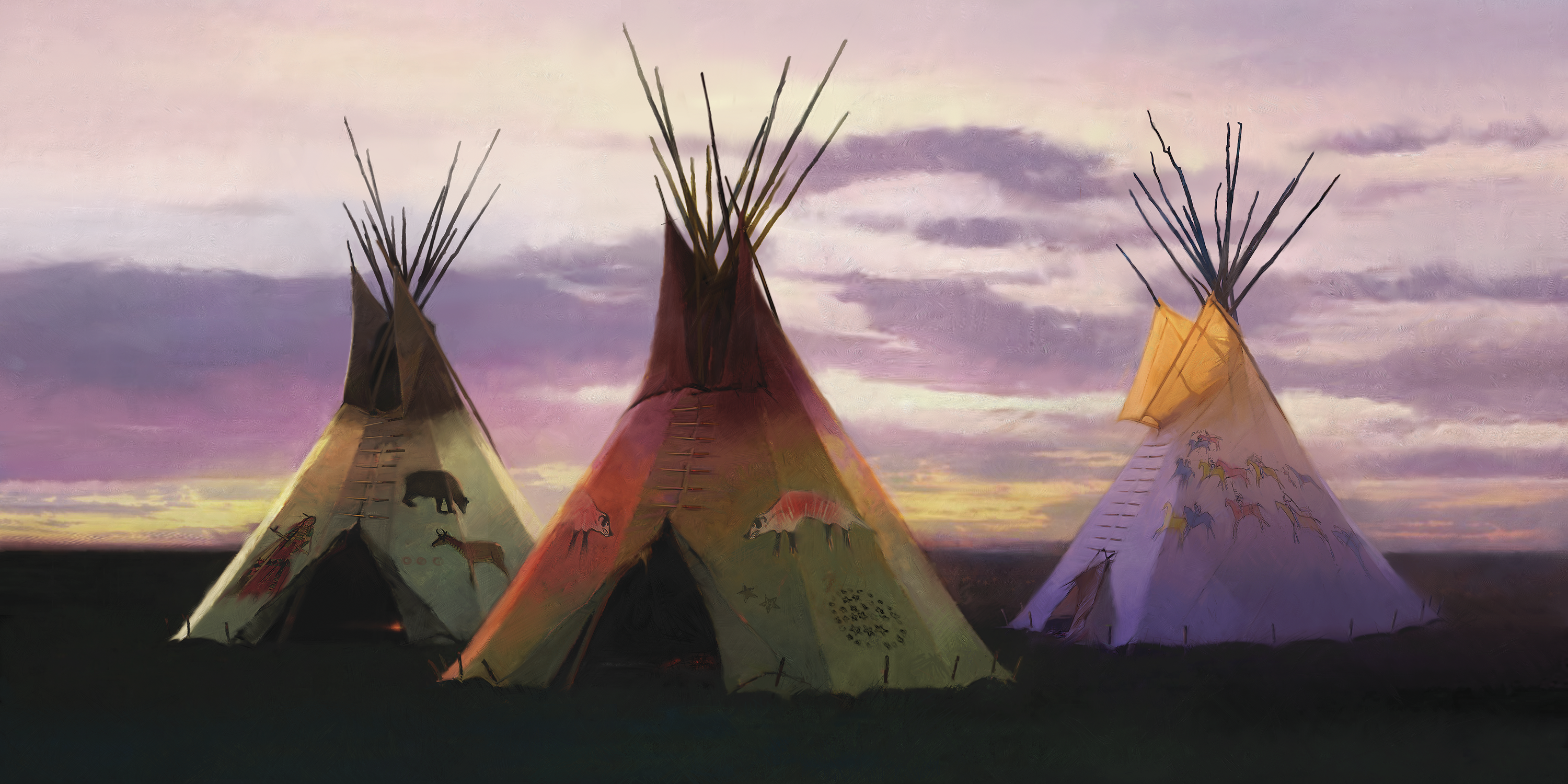 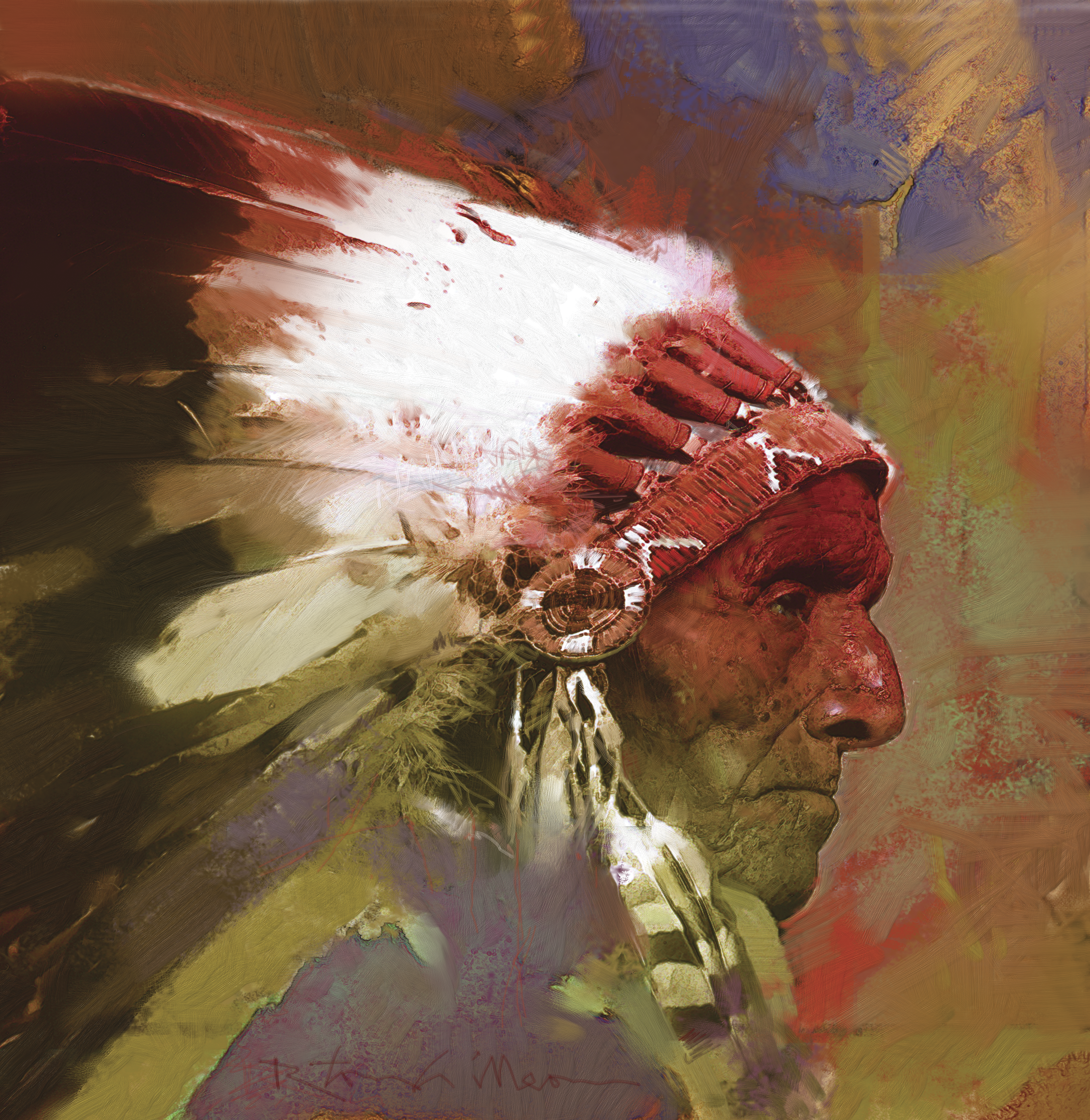 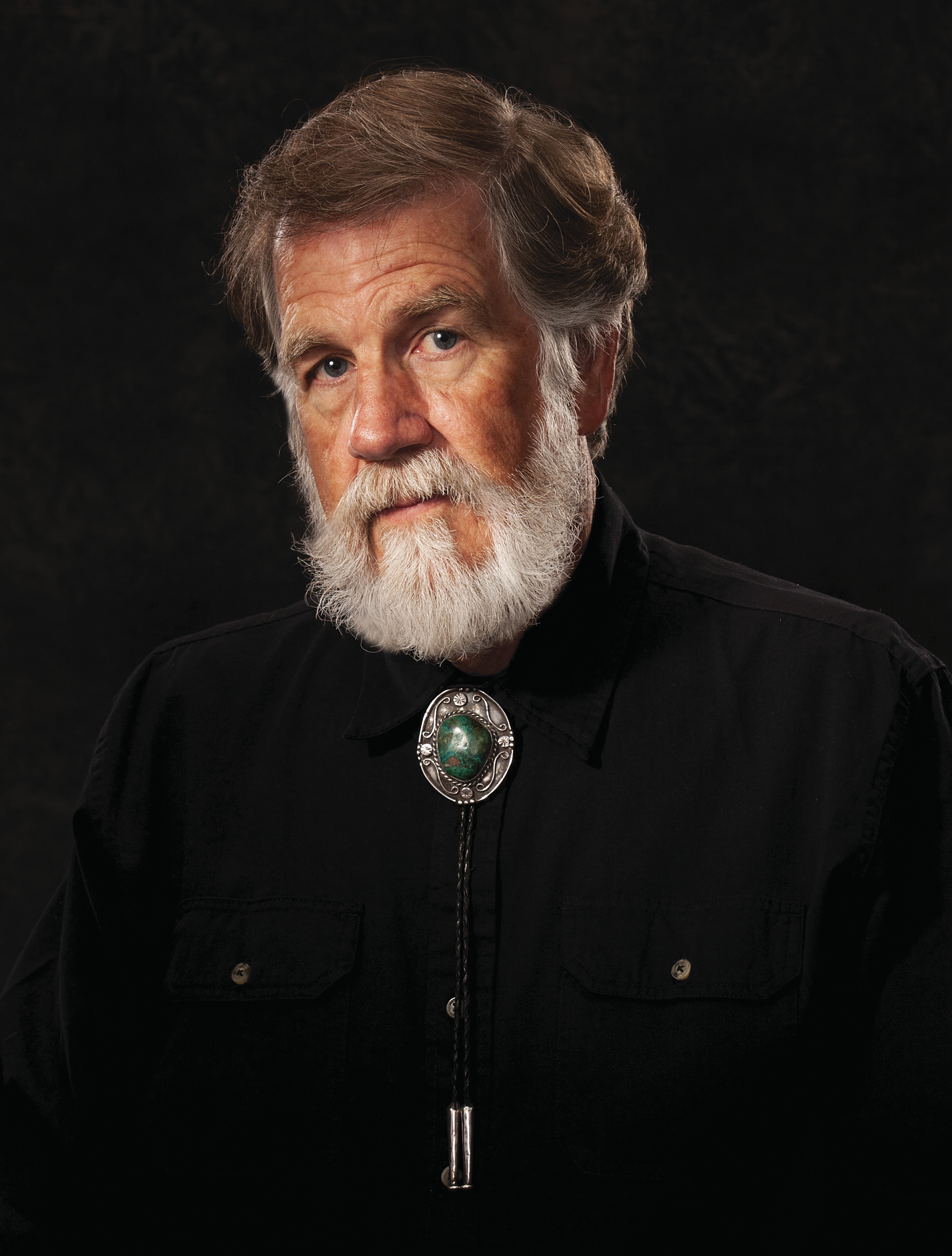 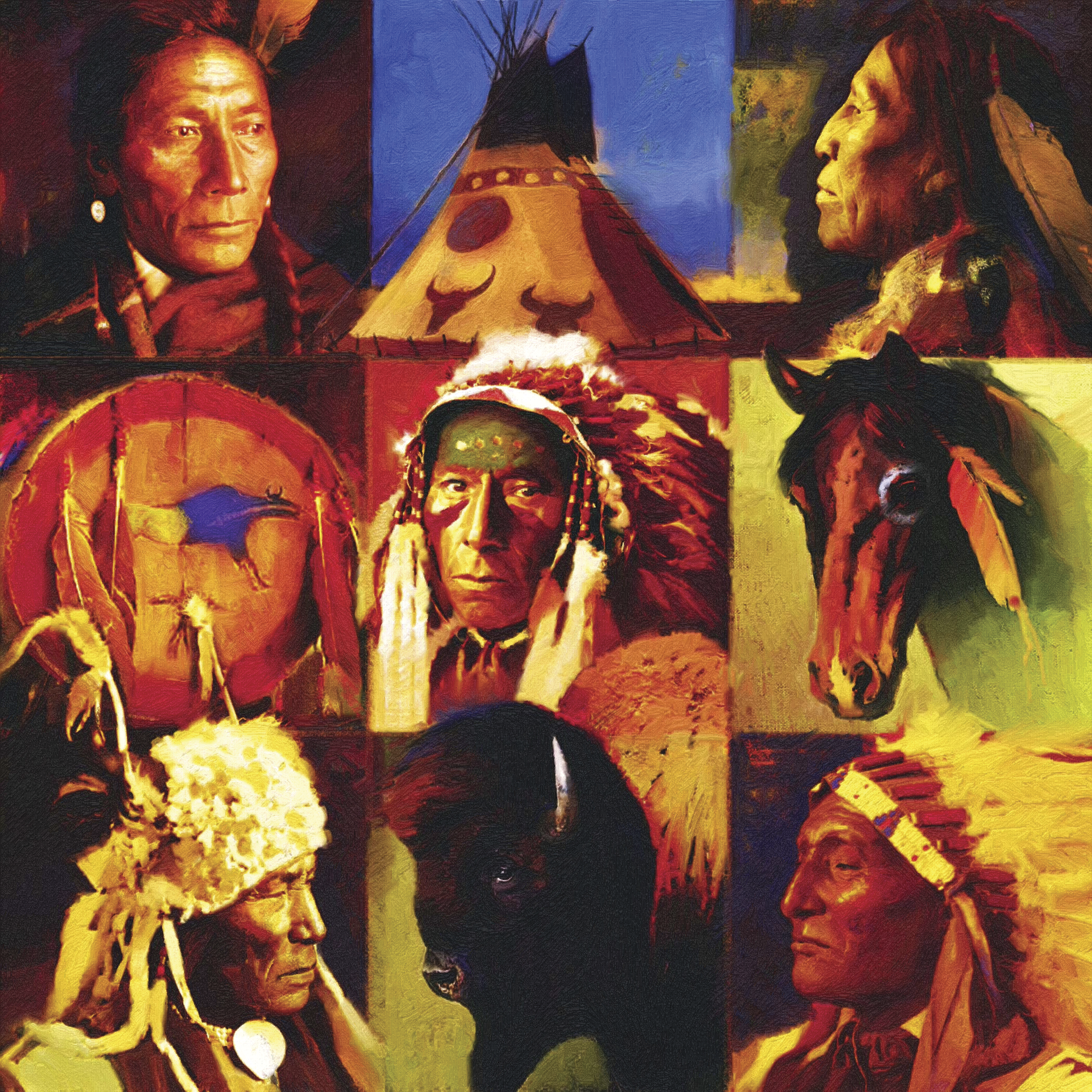 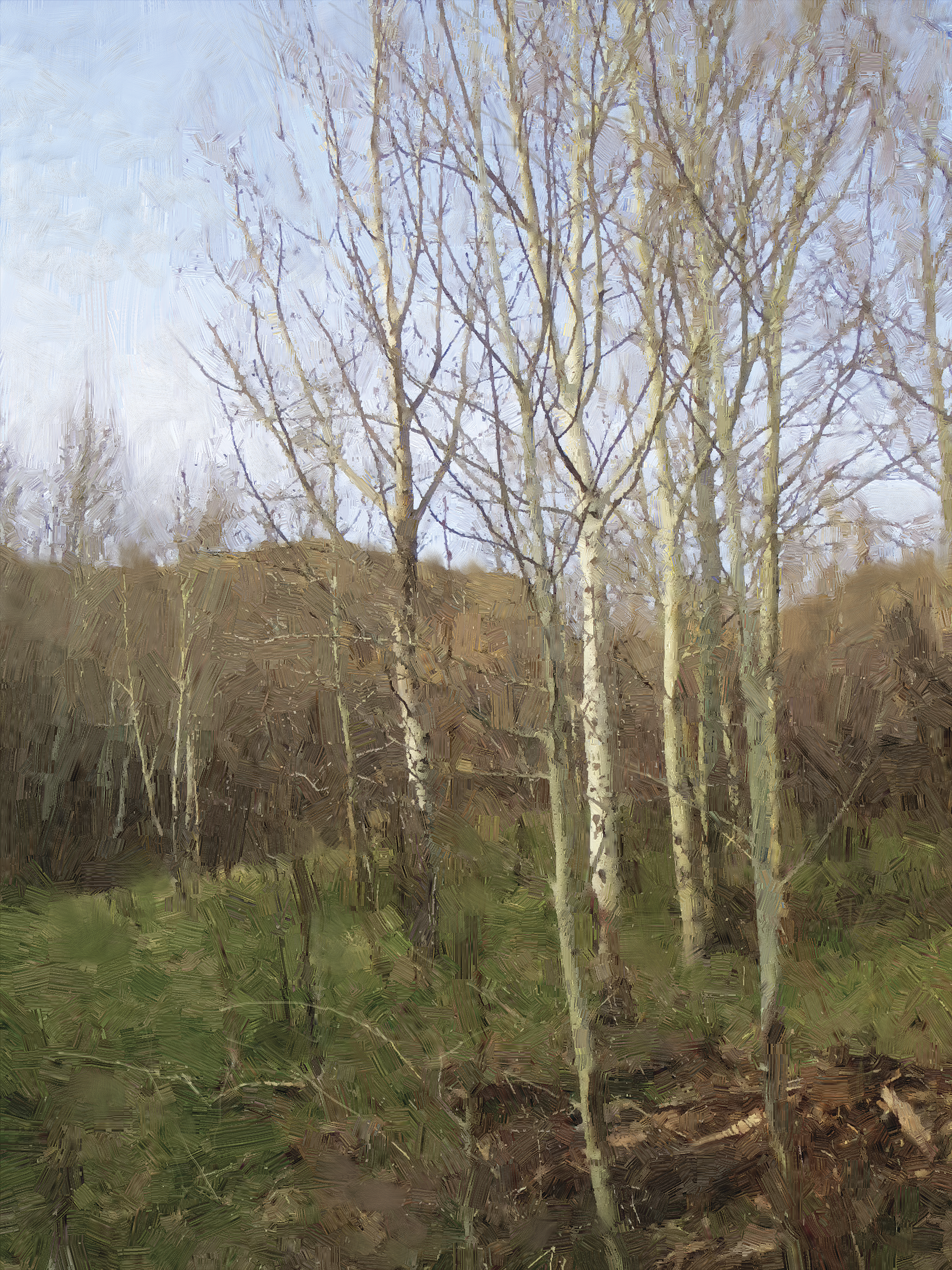 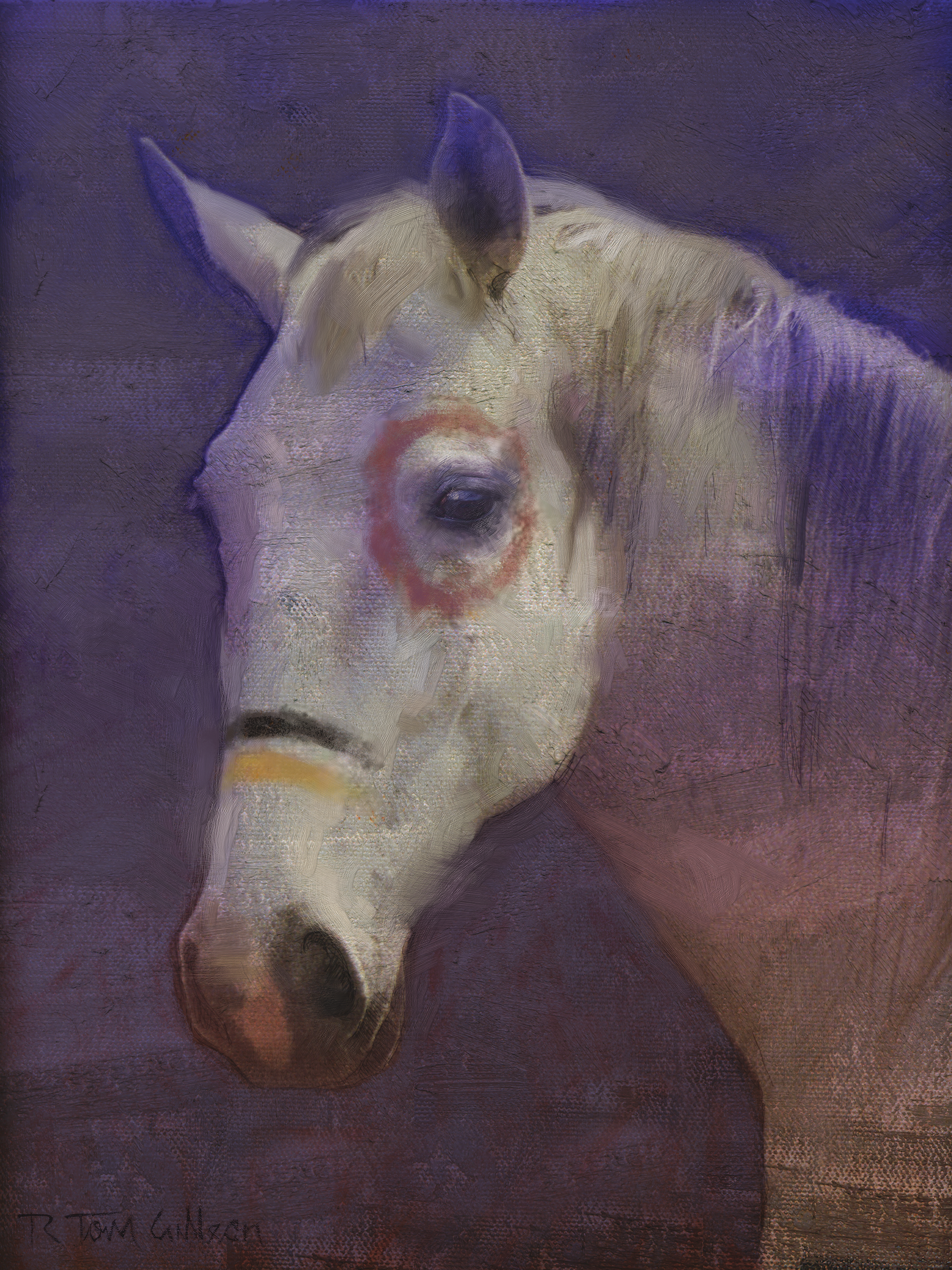 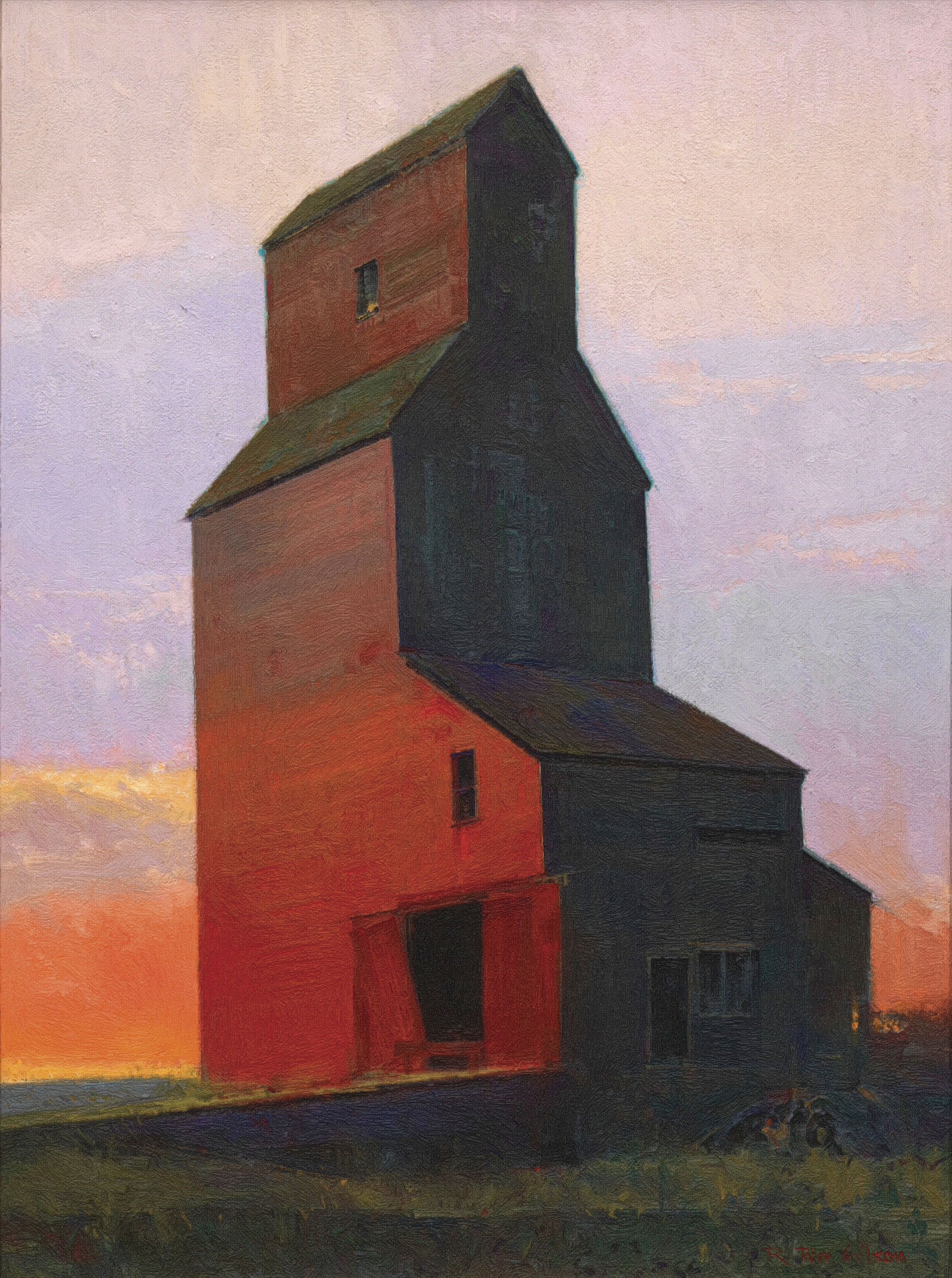