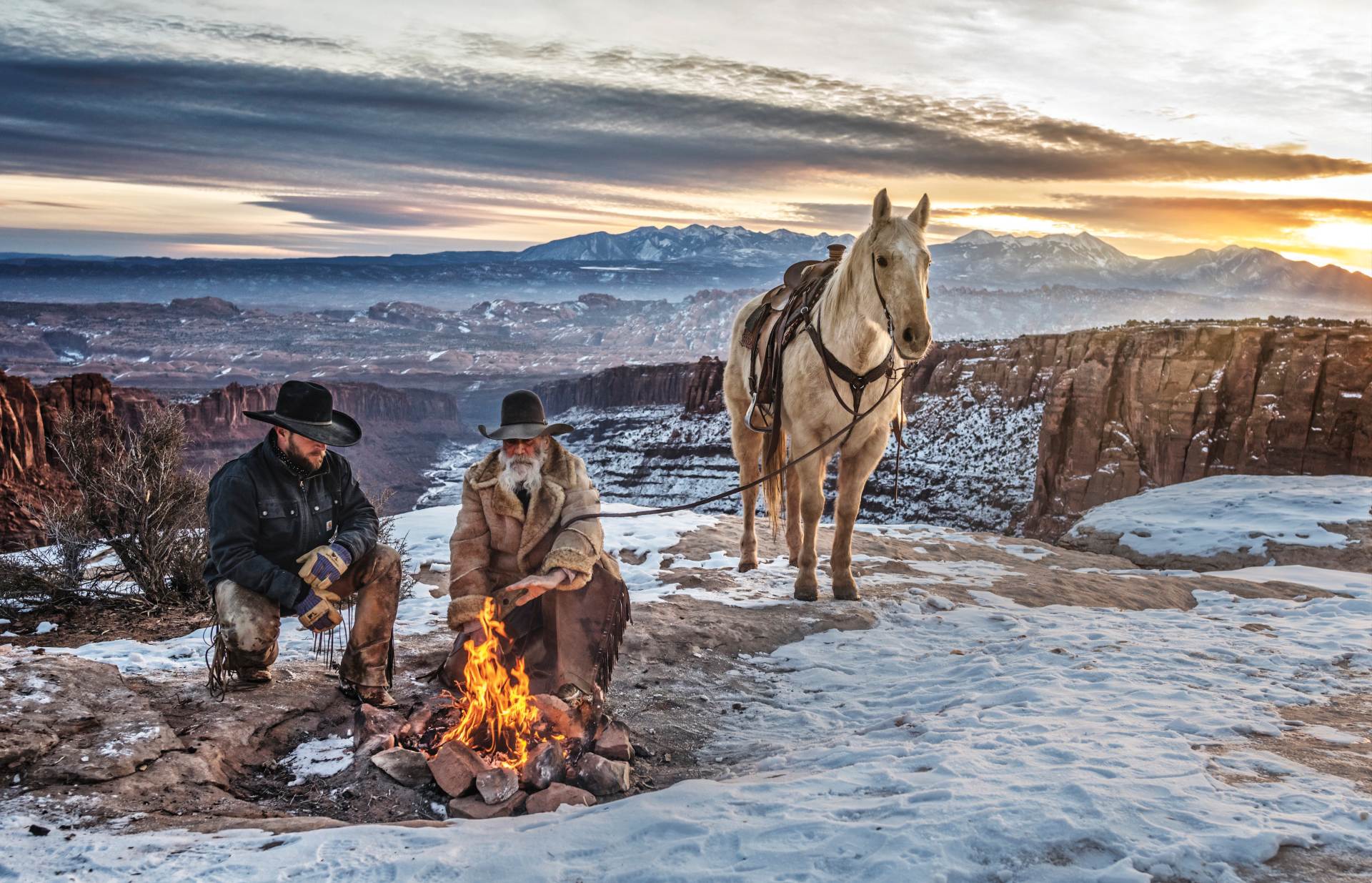 Director Steven Spielberg once said his greatest fear was boring his audience. And that’s a fear artist David Yarrow takes to heart.

“If his biggest fear is boring people, then we all better watch out,” Yarrow says, laughing. “But I think that’s a good starting premise to have as an artist. You don’t want to bore people.”

The fact that Yarrow is one of the top-selling fine art photographers in the world is one good indicator he needn’t worry. But it’s only when you look at the wild photographs he makes — and hear the stories behind the photo shoots — that you see how actively invested Yarrow is in not being boring. 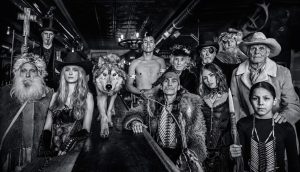 For instance, a first glance at a Yarrow photograph set inside Virginia City’s Pioneer Bar can come as a bit of shock if you are expecting more typical Western art. In a black-and-white picture titled The Last Chance Saloon, the London-based photographer has assembled a cast of 11 characters dressed in clothing circa 1890, gathered around one end of the rustic bar. Among the crew we see: a tall man with a goatee and top hat holding a wooden crosier; a Native American family dressed in traditional clothing holding spears and bows and arrows; women in corsets; and a man with an eyepatch standing next to an elegantly dressed older lady. They’re all looking straight at the camera, family-portrait style. And on top of the bar, stepping through the center of the group like a supermodel on a catwalk, is a wolf.

The photograph is undeniably “of the West,” but its execution defies the genre. It’s not classic cowboy art nor is it candid in the way a street photographer might shoot the inside of a rural Montana bar. It’s a tribute to a time and place, but it doesn’t depict reality. It achieves a world of its own in the form of playful revisionist history, exquisitely textured by black and chrome in a way that makes it come alive.

Yarrow is known as a black-and-white photographer, and he comes by it honestly. He was born in Glasgow, Scotland, and spent some of his early years working in his own darkroom on London’s famous Fleet Street — a storied thoroughfare still synonymous with the publishing industry that once dominated it. He would print up pictures at night to run in newspapers the following morning. And those photos were mostly in black and white.

“So there is a little bit of that in my DNA,” he says.

“Whereas color photography is very literal, black and white — because it’s not reality and because it is reductive — allows the viewer to interpret it in their own way,” Yarrow says.

Yarrow’s big break as a photographer was in 1986 when he took an iconic shot of Argentinian soccer player Diego Maradona (in color) being hoisted by his teammates as he triumphantly raised the World Cup. Yarrow was 20, studying in Glasgow and pursuing photography on the side. He says he got lucky, but the fact that he flew down to Mexico City and bribed a guard with whiskey to let him get close enough for the shot shows the roots of his hunger. Now his shots are made with so much precision and big vision — often involving elaborate costumes, props, and high-profile celebrities — luck doesn’t seem like part of the equation.

Many of Yarrow’s photos are akin to what a major filmmaker would create if they only got one frame with which to do it. That makes sense; Yarrow claims cinematographers like Spielberg, Martin Scorsese, Quentin Tarantino, and the Coen brothers as some of his biggest inspirations. His photographs embody a big-picture feel, and some of the titles — There Will Be Blood and Django, among others — even make direct reference to beloved films.

“I take my lead from the Coen brothers,” Yarrow says. “They are brilliant film storytellers, but everything’s exaggerated to the point of parody. Which is what we do. We’re not working for National Geographic or the History Channel.”

Courtney Olson, head curator for Relévant Galleries in Denver, Colorado, says the photographer’s Western images share anecdotes about the region. “The storytelling scenes are all set up like movie sets, so it’s almost like a freeze frame from a movie or book or song; it’s incredible, and that’s what people really relate to,” she says, adding that Relévant Galleries will have exclusive access to two new pieces from Yarrow’s Arizona collection, which is “great timing, as we are opening our Scottsdale location this November.”

Yarrow’s work with celebrities, like supermodels Cindy Crawford and Cara Delevingne, adds to the blockbuster atmosphere. It’s also a strategy. The photo shoots cost a lot and the images go for a lot, but it’s also a smart way to raise money for charity. When Australia caught on fire in 2019, Yarrow helped raise $2 million for the Koala Comeback Campaign. His new book, Storytelling, featuring several of his Old West pictures, includes an introduction from Crawford, and proceeds will fund her philanthropic work with pediatric cancer.

“I think that if you’re trying to work with a very high-profile person in Hollywood or sports or politics, talking about collaboration and raising money for people less fortunate than yourself is a good starting premise for collaboration,” Yarrow says. “I also think that in my position, it is the right thing to do — to give back. I think I have a responsibility to do so.”

Yarrow is the definition of a globetrotter. One week he’s in Montana shooting Old West stories. Another, Antarctica, then Colorado, and Texas. He has shot stunning, up-close images of wildlife, like Marvel, a riveting head-on shot of a black panther (with another film reference.) He’s created elaborate projects in South Africa and the Sudan in collaboration with Kevin Richardson, a “lion whisperer” who runs a lion sanctuary.

“It takes him a few minutes to take the picture, but the time and energy and effort that goes into the planning is epic — just epic,” says Courtney Collins, owner of Courtney Collins Fine Art in Big Sky, Montana.

Collins is one of 36 galleries across the world representing Yarrow, and one of the top sellers of his work in the U.S. She started her gallery in 2020, at the height of the pandemic, without an established name for herself. She talked Yarrow into choosing her gallery with the promise she would work hard for it — and she has. For Collins, success is about more than sales.

“Despite all his success, David is still hungry and he’s still vulnerable and he still cares so much when people come and hear him speak,” Collins says. “Some artists are just over it, you know? But David Yarrow? He’s one of the best photographers in the world, and he’ll sit with you and still be so excited about sharing his art.”

A few of Yarrow’s top-selling pieces, such as Vantage Point and Iron Horse, are on display at the Montage Hotel in Big Sky. The hotel’s manager, Victorio Gonzalez, is the curator there, and a big fan of the way the photographs evoke emotion and invite interpretation. “I love the juxtaposition between the power and the beauty,” he says. “There’s always a strength and a message behind each one of the pieces. Art, for me, can sometimes be polemic, or thought-provoking. But the pieces we have from David are very connective. You can sense what that person or animal is feeling. But then you wonder, ‘Is it really what I think, or is it something different?’” 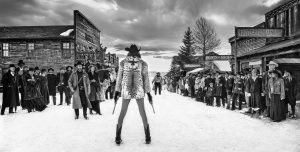 There are two important ingredients to a Yarrow shoot. One is that even though he’s the director and photographer, he prefers a work environment free of hierarchy, where anyone can contribute ideas. His other condition is that shoots not be prescriptive. The high production values and logistics mean Yarrow doesn’t cancel projects due to weather. He may check for snow every hour during a January shoot in Montana, but if there’s going to be a storm, he always has another plan.

Yarrow has faced some controversy in the conservation community. While it’s hard to untangle fact from fiction, a lot of it seems to come from a general concern. Are animals in his shoots being treated ethically? Are the images of Native Americans wearing traditional clothes problematic? Yarrow is tender about these accusations.

“I fight back quite strongly against the idea that photographing Native Americans, for instance, in Montana, in their traditional gear is something that is akin to either appropriation or patronization,” he says. “If you’re the Chief of the Lakota, you’re proud to show your heritage. We always ask whether they’re okay with it, and they embrace it.” 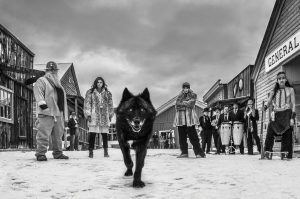 One antidote to the concern is that Yarrow provides narratives to his photographs that show transparency and help answer some of those questions. He describes his process working with a sanctuary lion, and he provides background to how he creates relationships with places and people. The narratives don’t detract from the mystery of the art, but they do help the viewer understand his process better — and, in the end, provide even more dimension to Yarrow’s ambitious work.

“The picking up of the camera is such a small part of my job,” he says. “Emotional investment in the people who are going to be part of what I do is a very big part of my job.

“I think as I’ve gotten older, I’m full of gratitude to be in the position that we can afford to spend $100,000 on a day shoot,” Yarrow adds. “I’ve got a very keen eye, I think, as to what people want. People want emotion in the photograph. There must be something that grabs the heart and keeps it there. And that’s the challenge.”