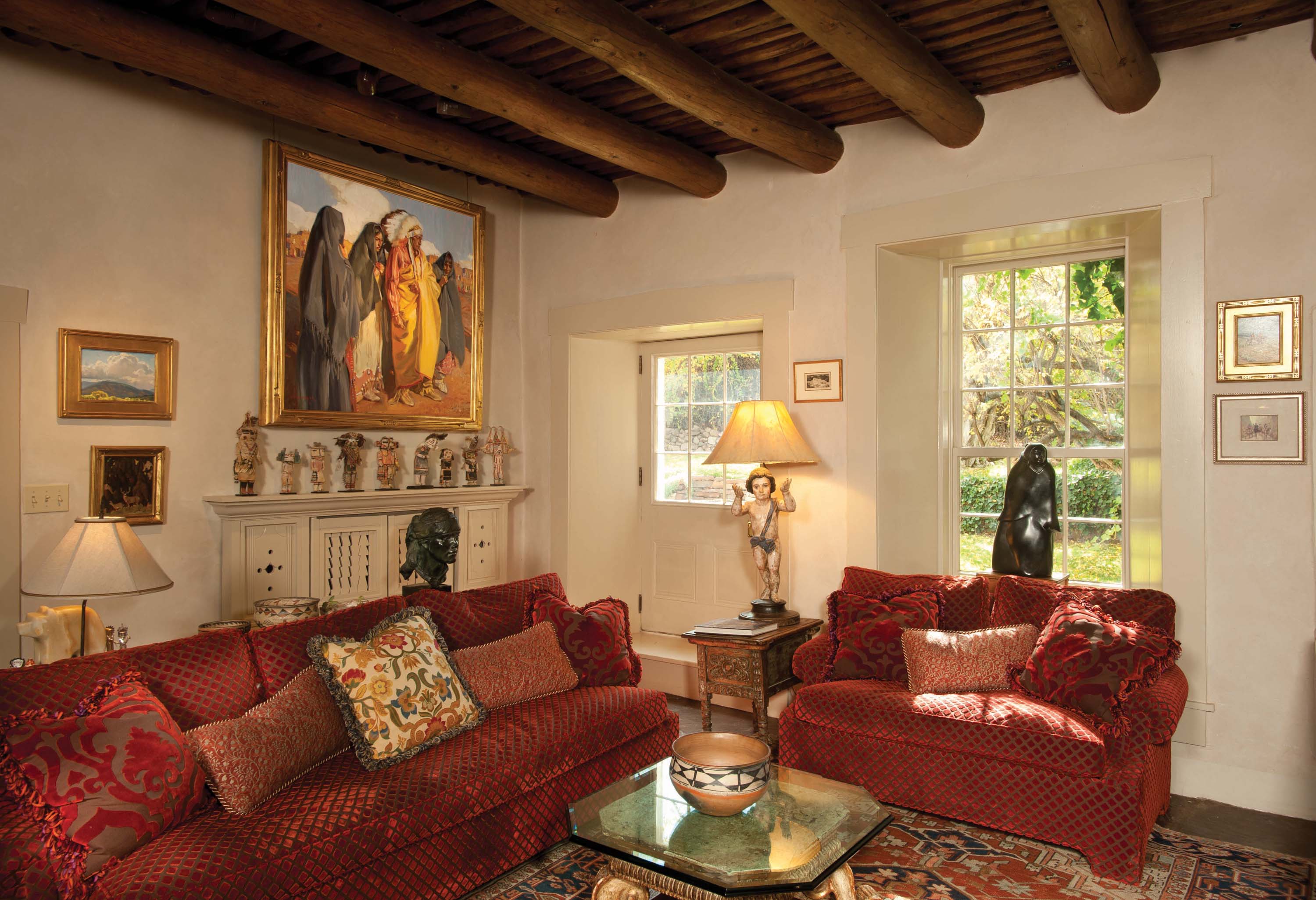 The "sala" or living room showcases John Moyer’s painting "A Man and His Daughters" over the radiator and mantle, created by WPA artists, which holds a collection of Native American kachinas.

STEEPED IN HISTORY AND LORE, and nestled into the beauty of Santa Fe’s famous Canyon Road, the Nedra and Richard Matteucci residence is the quintessential adobe home. Set amidst galleries, the home itself contains a gallery of art and antiques that is worthy of a museum. From chairs made in the early 1900s by the chief of the Taos Pueblo for friends of Walter Ufer, to an early period Fortuny chair and carvings by Nicolai Fechin, the Matteuccis’ personal collection is a tribute to the rich cultural history of the region, and an homage to the artists who have called it home.

The owner of Nedra Matteucci Galleries, a renowned Santa Fe gallery celebrated for its collection of 19th- and 20th-century art, Nedra says that living with art has always been a priority for her. “As collectors and gallery owners, we feel strongly and believe in the art we sell; I infuse the gallery with the same fine quality of art and Native American antiquities that Richard and I enjoy in our home. The furnishings and objects are a bit more eclectic in our home, but our private collection of fine art remains a constant and one which we are excited to continue building on in the years ahead,” she says.

Visitors are first welcomed to the home in a room filled with devotional art, including a Spanish Colonial gold-karat covered commode, an exquisite Bargueño from 1550, each drawer hand-painted on ivory, and a late 18th-century carved figure of San Roque.

As a gallerist who has amassed a sizable collection, Nedra has created inventive ways of pairing works. The ability to surprise viewers extends into her home. In a sitting room filled with historical paintings by Taos Founder artists, for example, paintings by contemporary artists John Moyers and Terri Kelly Moyers hold their own. In this same room, a painted chair from Russian artist Leon Gaspard sits opposite a child’s chair painted in response to Gaspard’s piece by John Moyers. Throughout the home, Nedra creates delightful conversations between works.

Dating back to the late 18th century, the Matteucci home was built in the traditional adobe style with no foundation. Its floors follow the natural elevations of the land. In a departure from traditional adobe construction, however, the Pueblo-style guest home was built with jacal construction, in which the logs or vigas were set vertically into the ground, then chinked with adobe mud.

Two of its former residents, suffragette and art lover Margretta Stewart Dietrich and her artist sister Dorothy Newkirk Stewart, added their own touches during their residency in the 1920s. Stewart painted a large mural in a breezeway outside the kitchen, reminiscent of Diego Rivera, whose signed tile mural is ensconced in an outdoor wall.

The Matteuccis purchased the home in 1990, shortly after acquiring the venerable Fenn Gallery from Forrest Fenn, who played a significant role in introducing the Matteuccis to the Taos Founder artists Oscar Berninghaus, E.I. Couse and Joseph Sharp, whose works decorate the walls of the home.

Choosing to leave the structures much as history had written them, the Matteuccis updated only where needed. They added gardens, created streams and planted trees, discovering along the way more of the history of the property and the craftspeople who left their marks. The interior floors of the home are black brick, created at the State Penitentiary, with their trademark glaze. Each room contains a fireplace and women from the nearby pueblos built its kiva fireplaces. Later, when radiators were added, WPA artists created their white painted grate-work.

For Nedra, the home and its myriad details is a work of art. “These thick walls are pieces of art themselves — without anything hanging on them,” she declares. “They were made with the sand and clay from the driveway and their thickness is sculptural to me. I lived in one room for two years without anything on the walls.”

For Nedra, living in an old home is akin to surrounding herself with art. “You can’t build the feel that you get in these old homes. This home has a life of its own and you have to respect it — you have to love an old house,” she says. 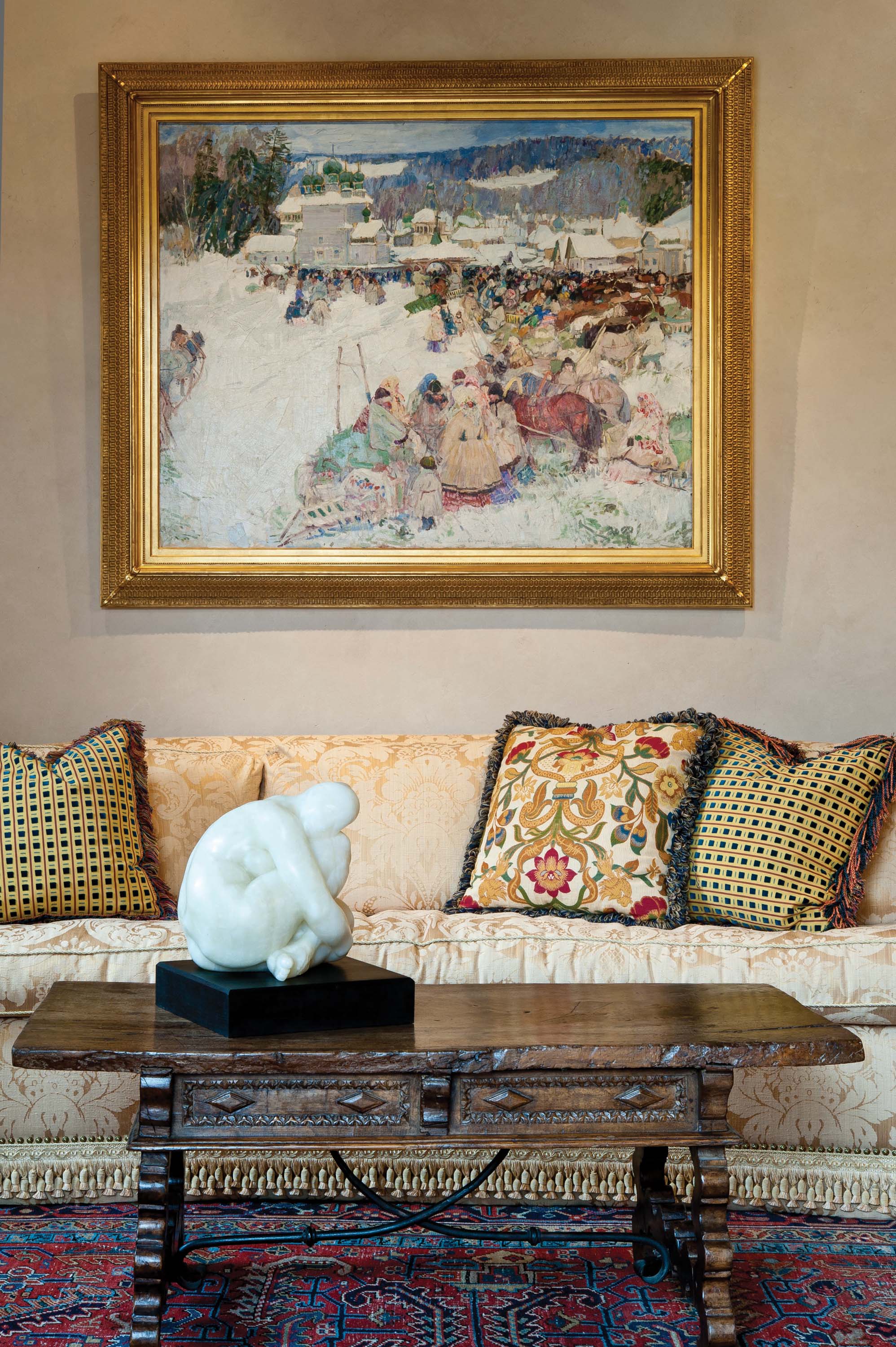 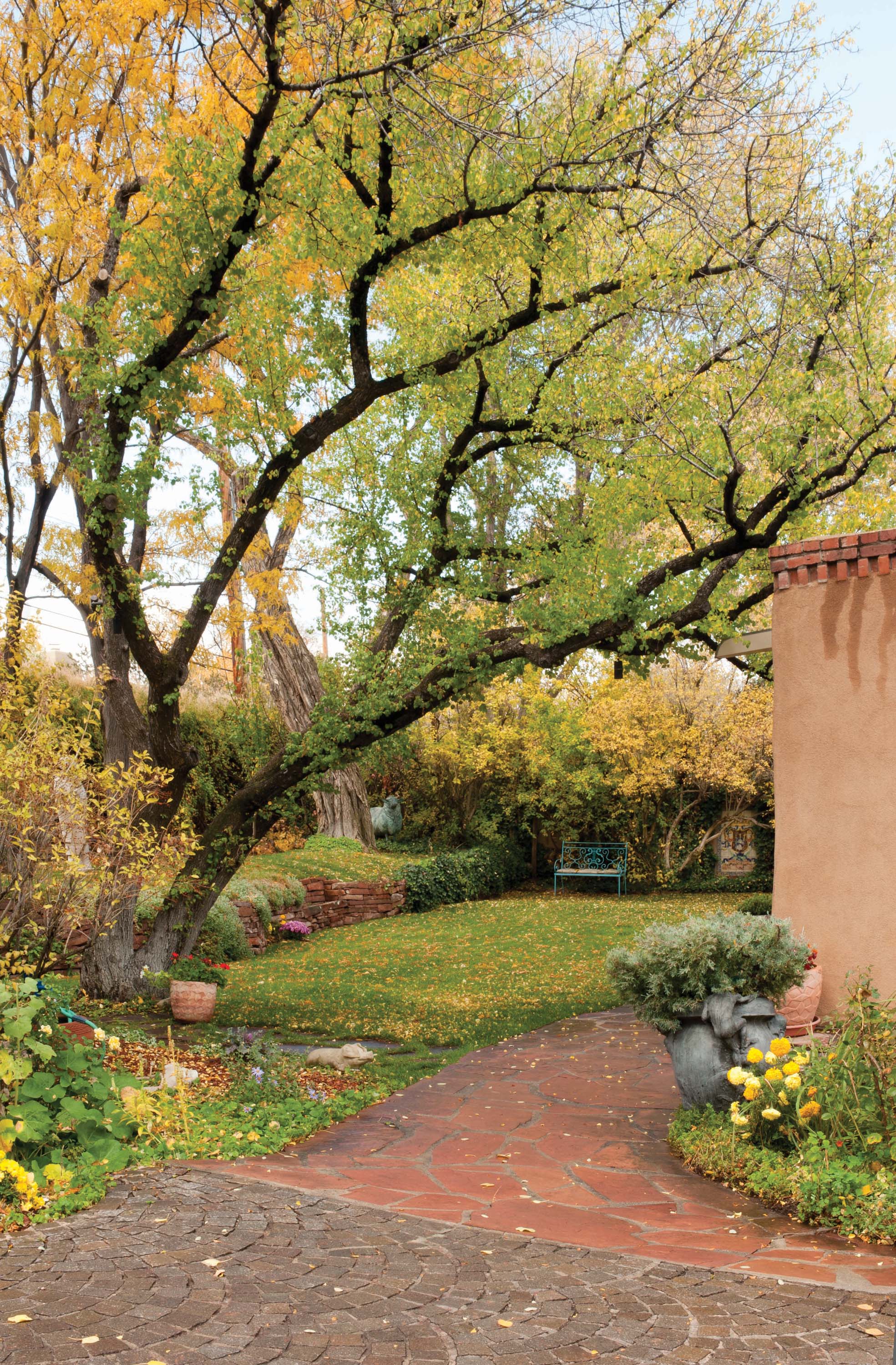 The Matteucci gardens add color throughout the property. 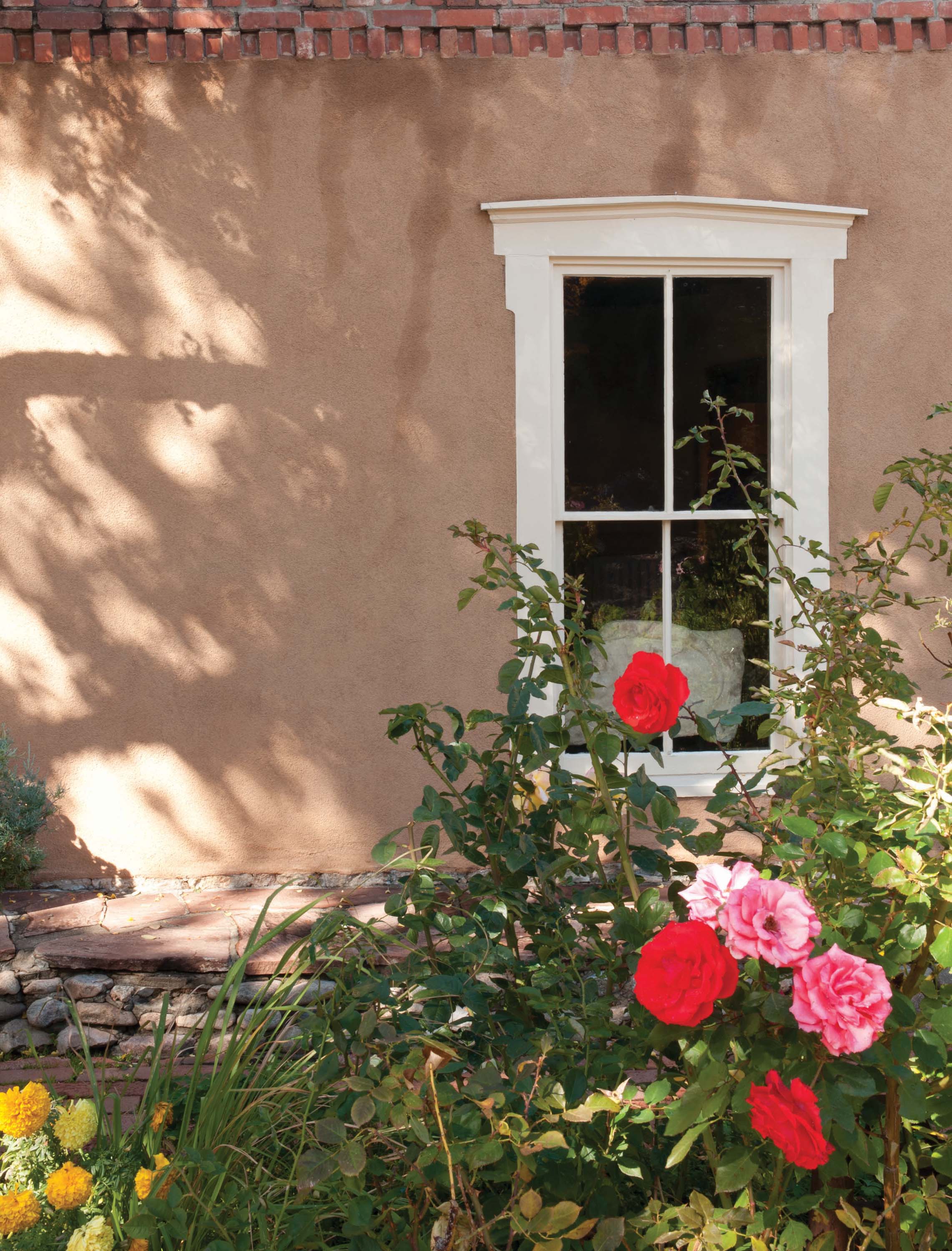 Gardens and streams surround the house and are watered by a well. 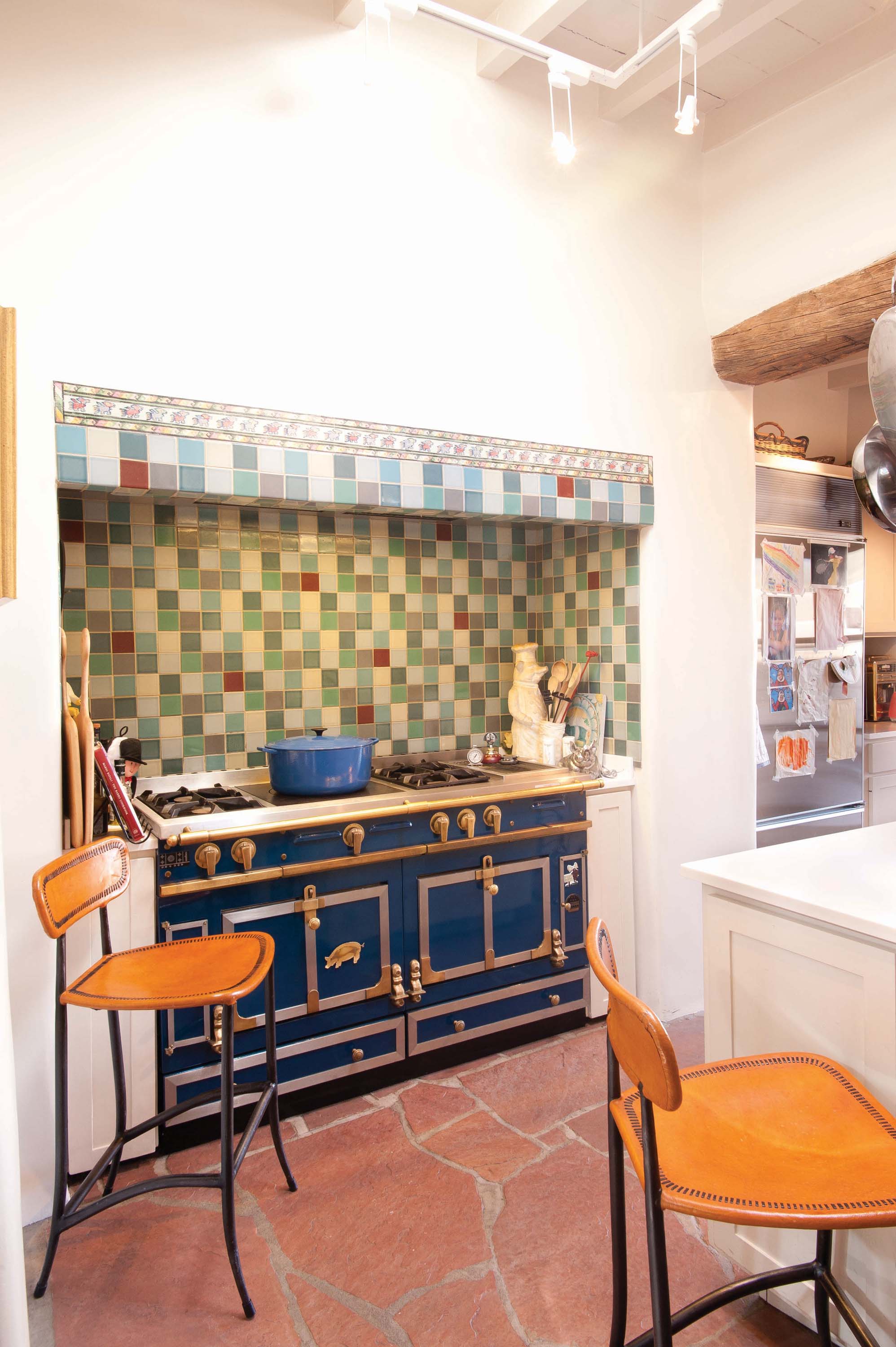 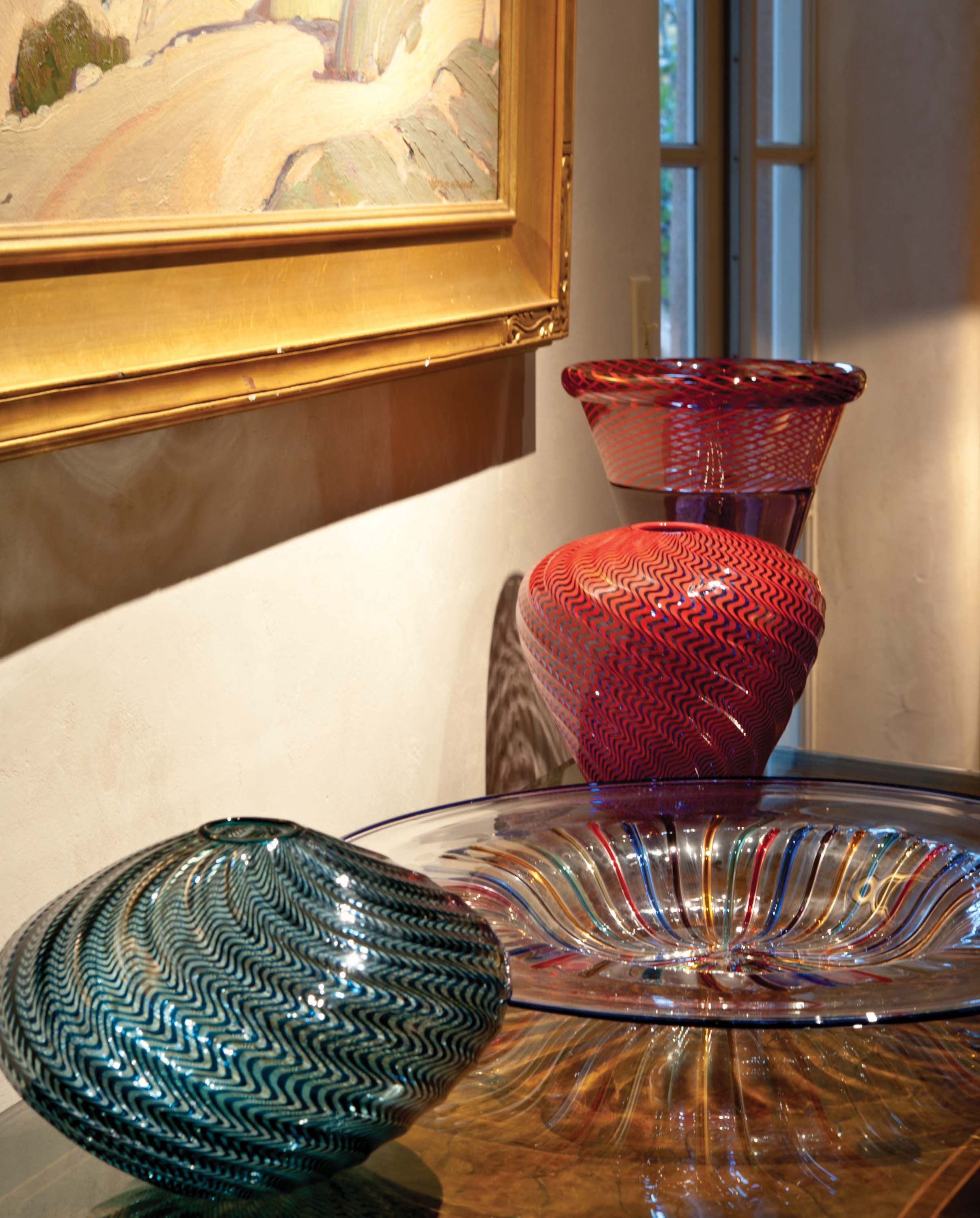 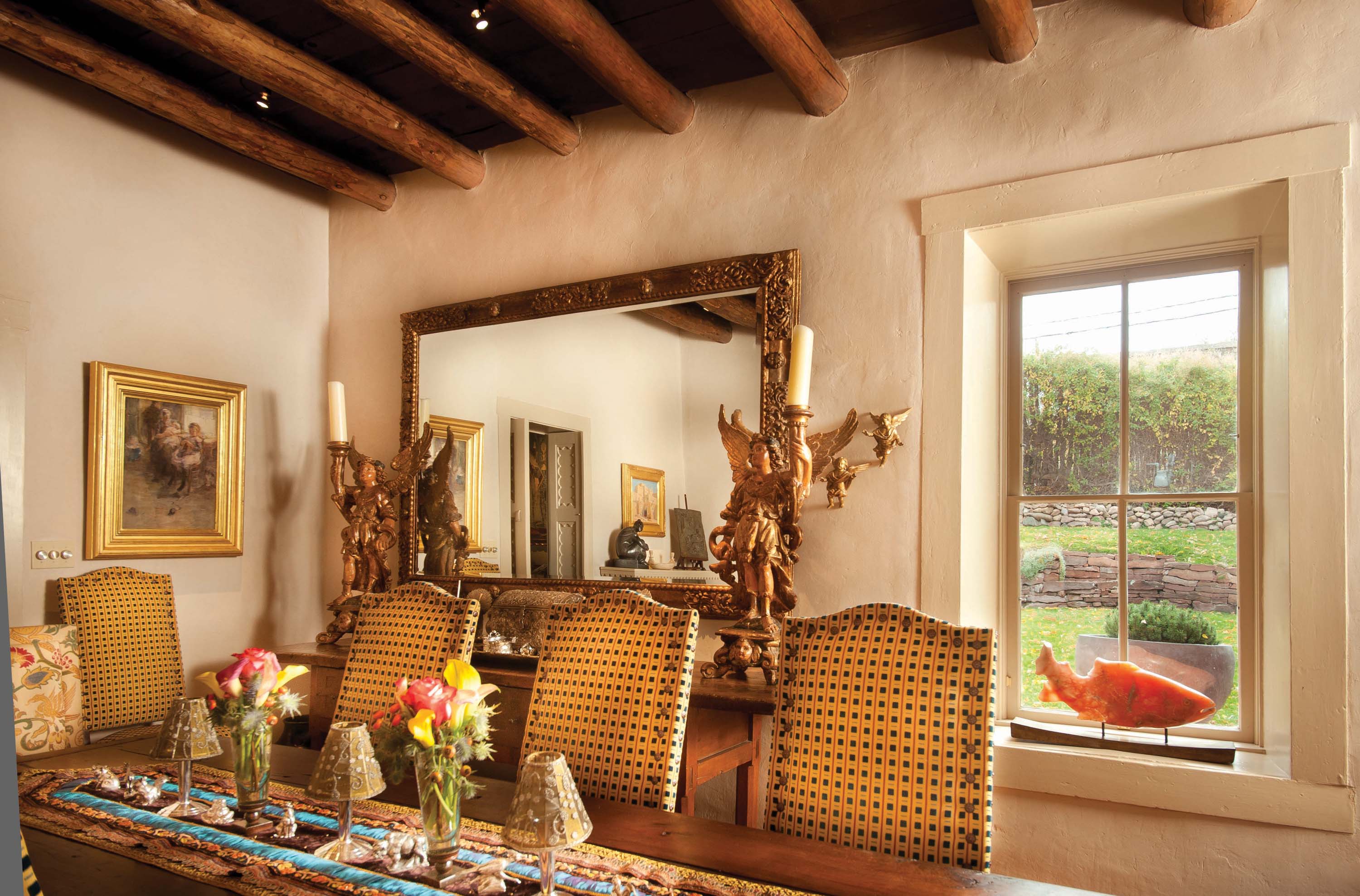 In the dining room, a painting by Alice Schille [1869-1955] looks upon a pair of 18th-century Italian candlesticks in front of an antique Spanish Colonial mirror. 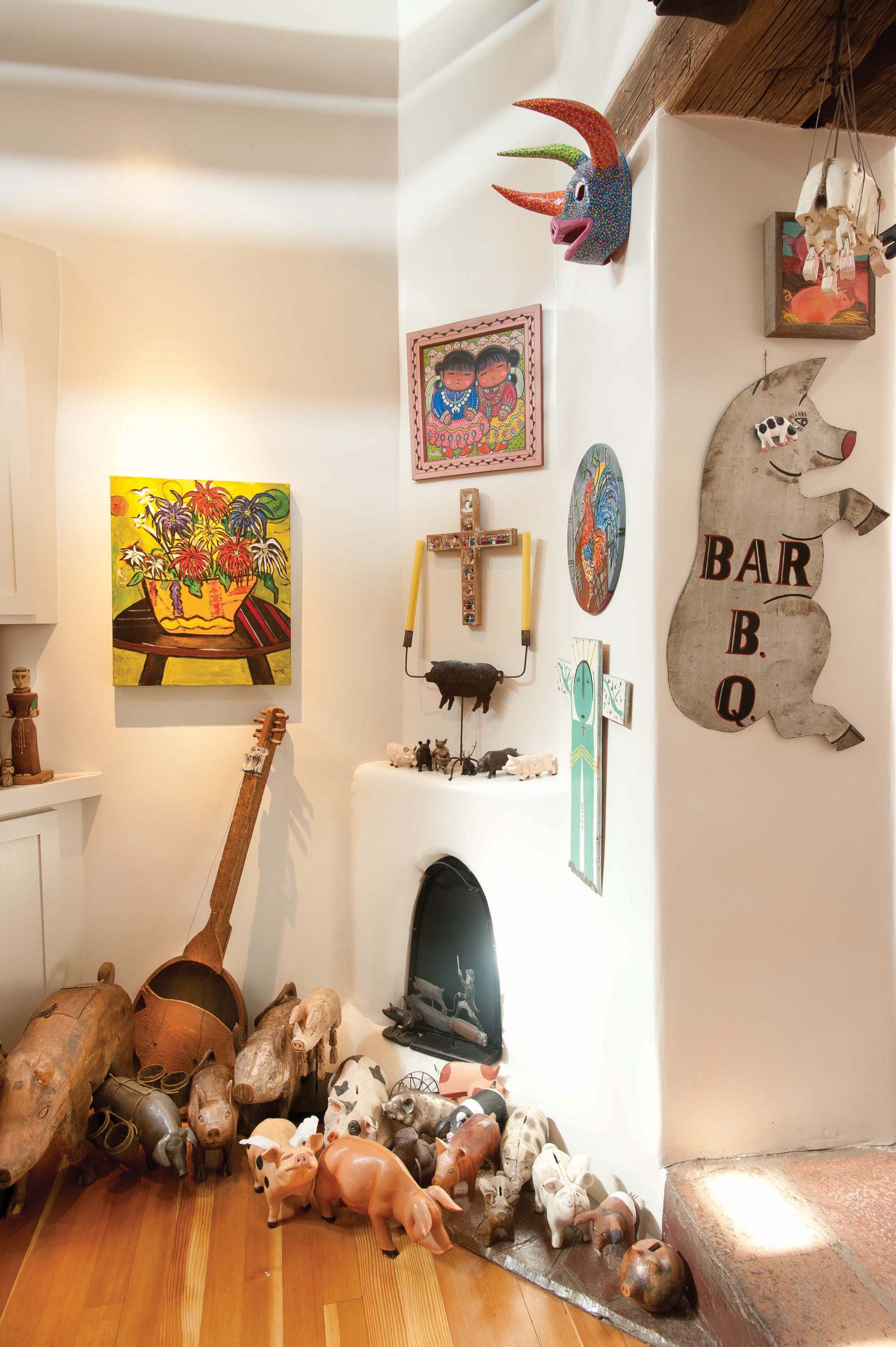 A collection of pigs takes up residence by the kitchen kiva. 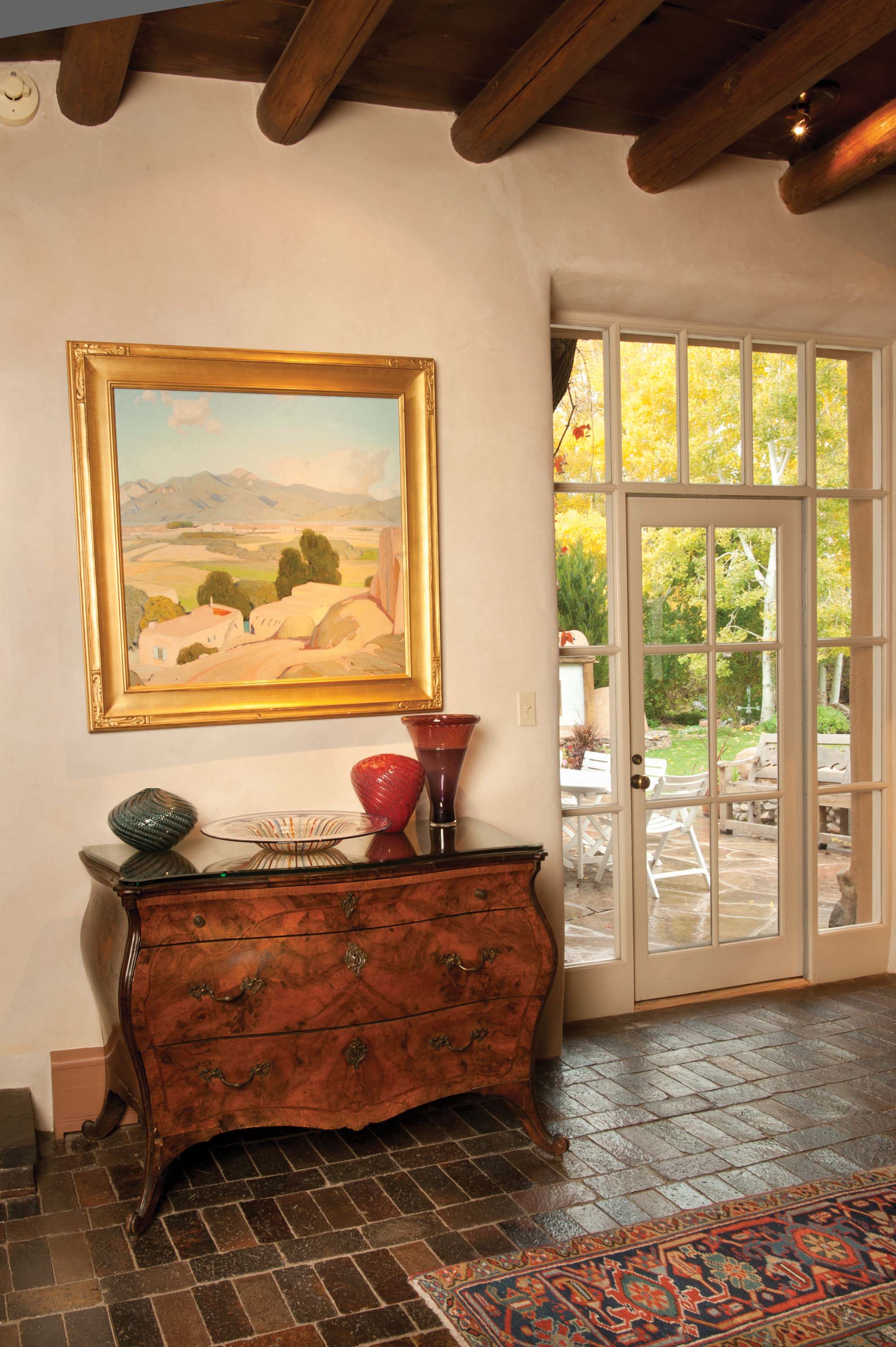 An early Victor Higgins [1884-1949] painting, “Spring Valley Taos” hangs over a Venetian Bombe chest in a sitting room flanked by a portal. The floors are covered in brick made at the New Mexico State Penitentiary.