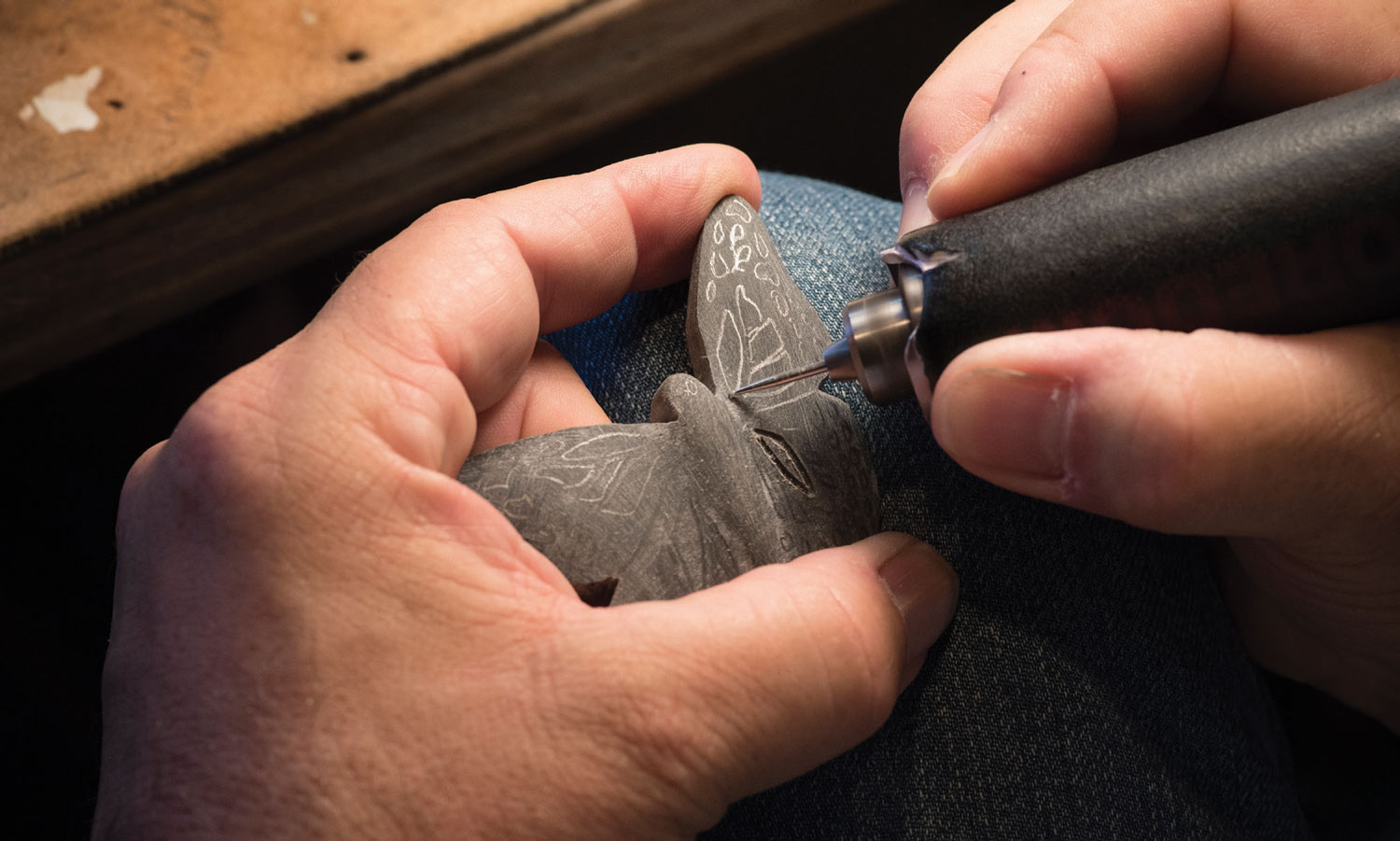 FOR KEVIN POURIER,  creating art is about beauty, tradition, spirit, and, most importantly, it’s about making an impactful statement. “People say they don’t think Native art should be political, but I think it should be more political,” Pourier says. “Art is pretty, but I think it should also speak. It should also empower; to say you can have a voice. I’ve seen a lot of people without a voice, and I think that’s what leads a lot of people to be lost and turn to alcohol and drugs,” he says. 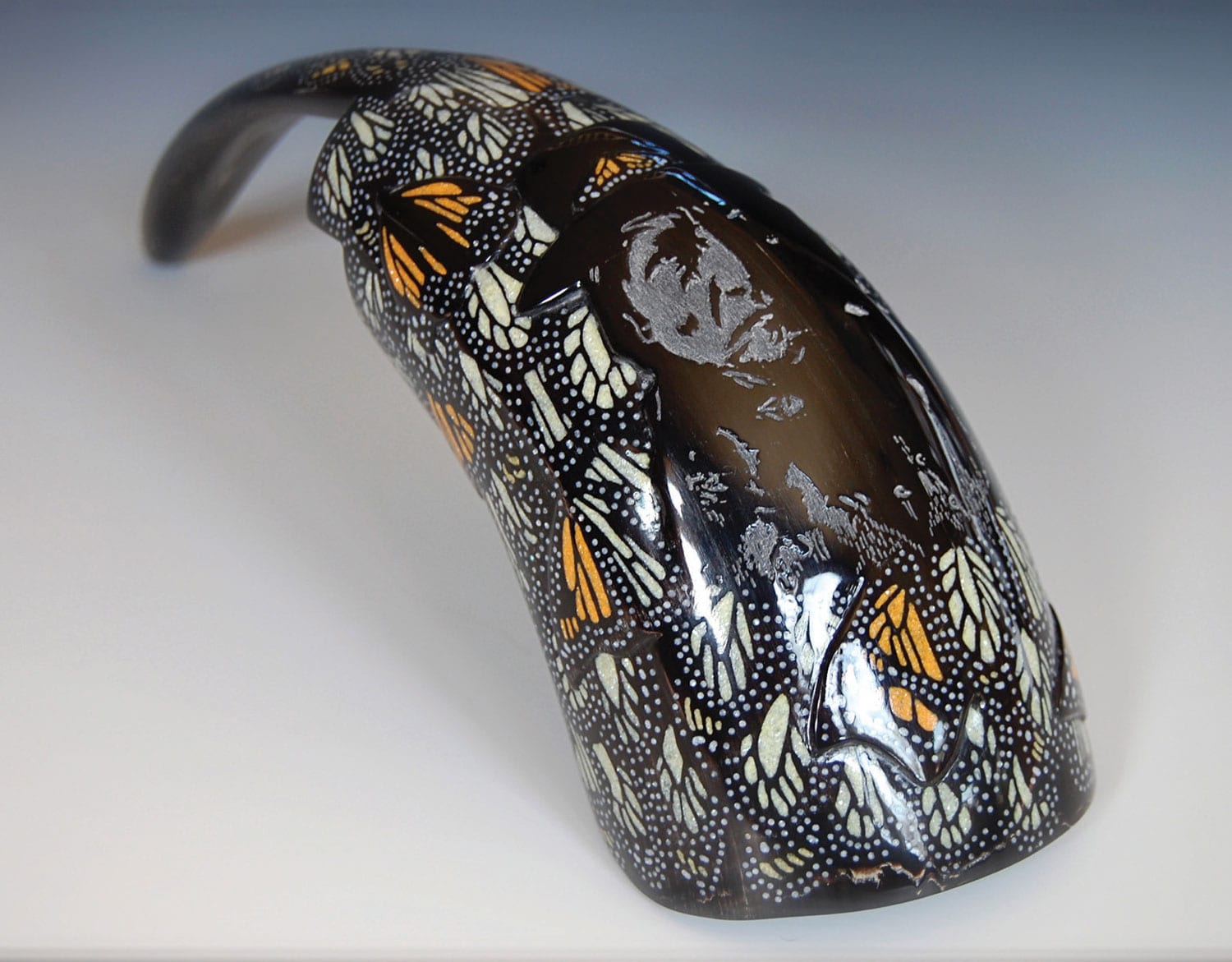 Titled They Tell Him Stories, this piece depicts the great Lakota Chief Sitting Bull and the monarch butter- flies who came to him and told him stories.

This passion gives Pourier’s work a definite edge, one recognized with the 2018 Santa Fe Indian Market Best of Show award. “No one’s safe in my art,” he says. “I don’t talk about races, but I talk about behaviors. Greediness, ego, that ‘fat taker’ behavior that we call wasi’chu, which means ‘takes the fat.’”

One of his pieces, titled Mixed Blood Guy, portrays the artist himself. “It was a self-portrait,” Pourier says, “and I had red fingers pointing at me this way and white fingers pointing at me the other way. And a white finger said, ‘Get back to the rez!’ And the red finger said, ‘Get off our rez!’ And another finger said, ‘You’re bad!’ And another said, ‘You’re good!’ So, it was about identity and that struggle of who we are, and how things can affect us.” 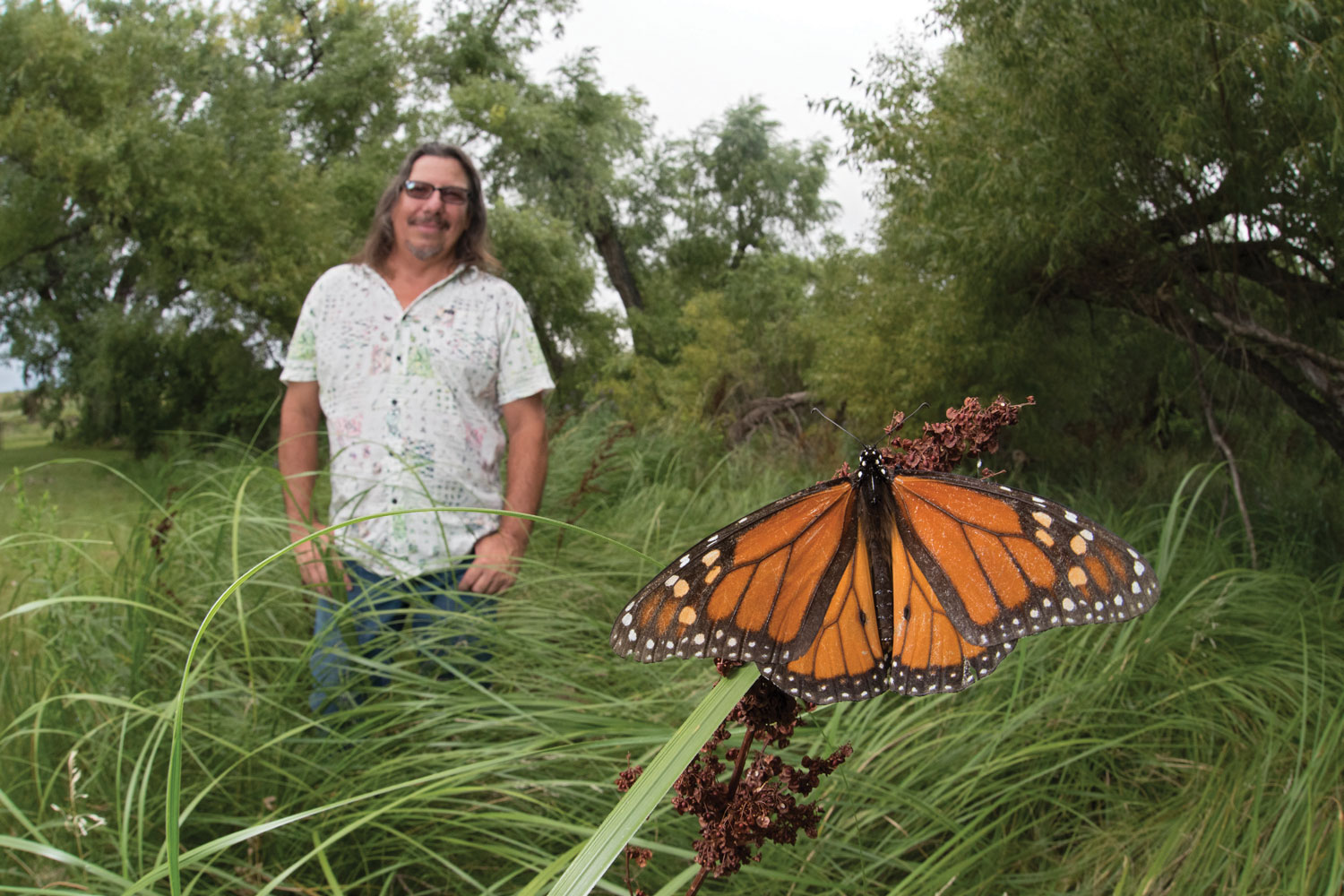 Monarch butterflies are a powerful symbol for Kevin Pourier. A butterfly first came to him during a ceremony at Bear Butte in South Dakota. At first, he didn’t tell anyone. “I didn’t have that beautiful ancestor dream,” he says, “so I thought my vision wasn’t as beautiful as everybody else’s.” But after several other encounters with butter- flies, he eventually told the Medicine Man. “He told me it was a powerful vision, and that from then on, every time I saw a butterfly, it would be a reminder of our traditional ways.” Photo courtesy ©WWF-US/Clay Bolt

For half of his life, Pourier couldn’t imagine the possibility of an art career. But a fortuitous confluence of experiences set him on the path. “I got clean and sober,” he says. “I started participating in our ceremonies. And I started hanging out with people who have integrity and vision.” 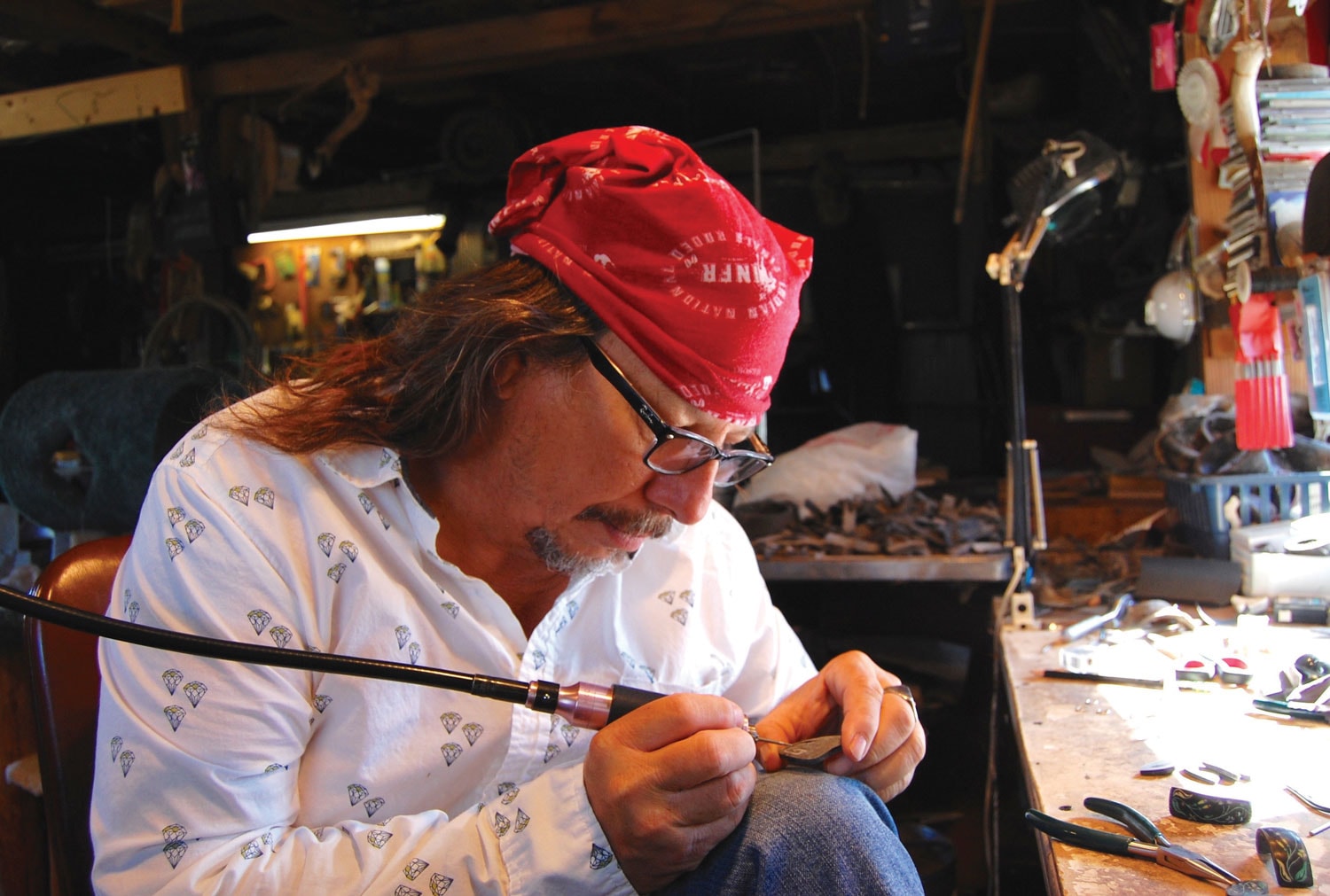 Pourier at work in his studio. His pieces are incredibly detailed and feature inlay, incision, and relief work. 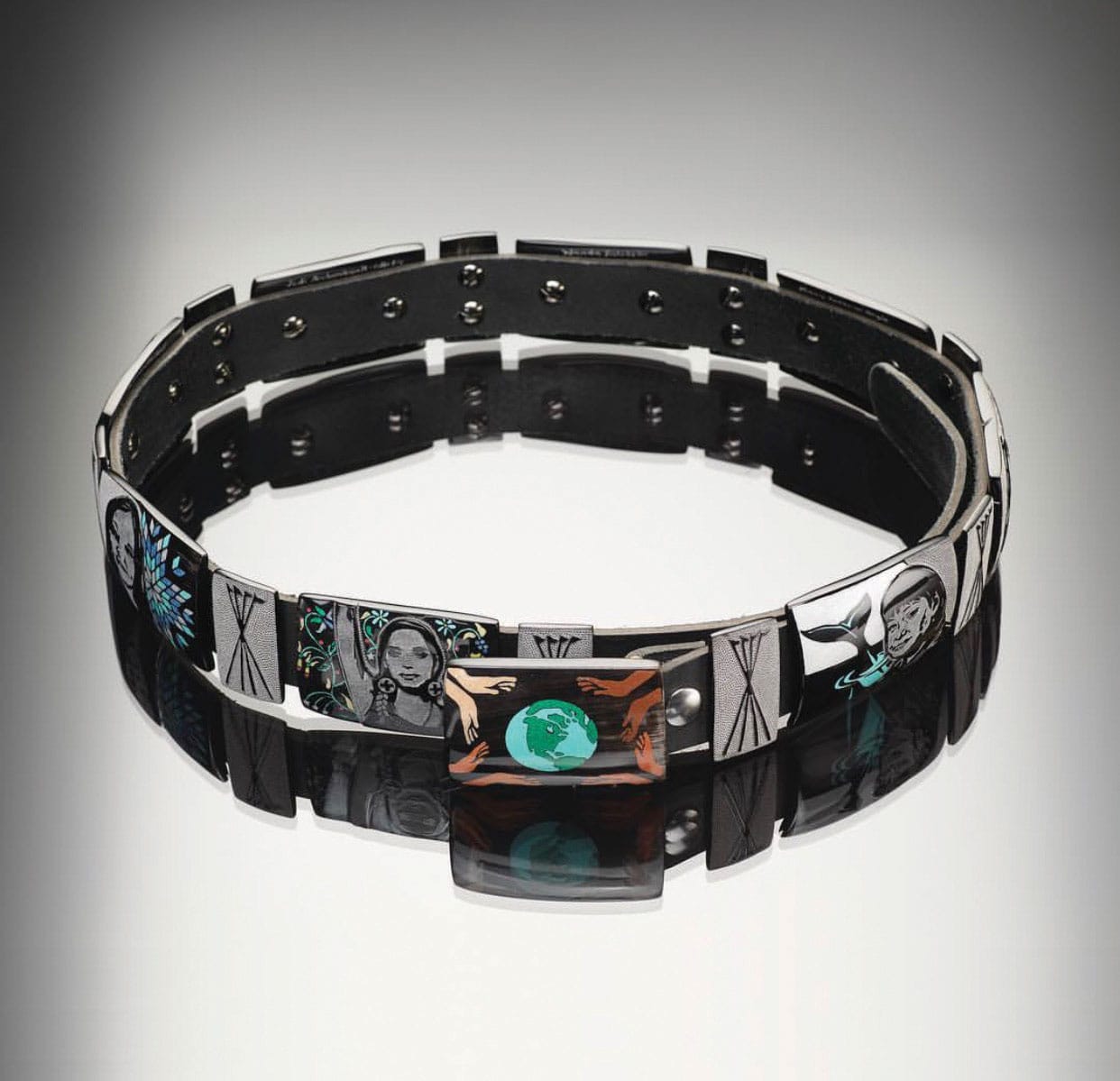 At the time, he was working a “going nowhere” job, stacking panels in a particle board factory. “A monkey could have done it,” he says. “I felt like I was wasting my life away. I felt like I was being strangled. So, I started drawing on the job. And through that process of drawing every day — which wasn’t part of my job description — I got this buffalo. I could draw it today with my eyes closed. When I do a necklace or earrings today, it’s that same buffalo from 30 years ago.” 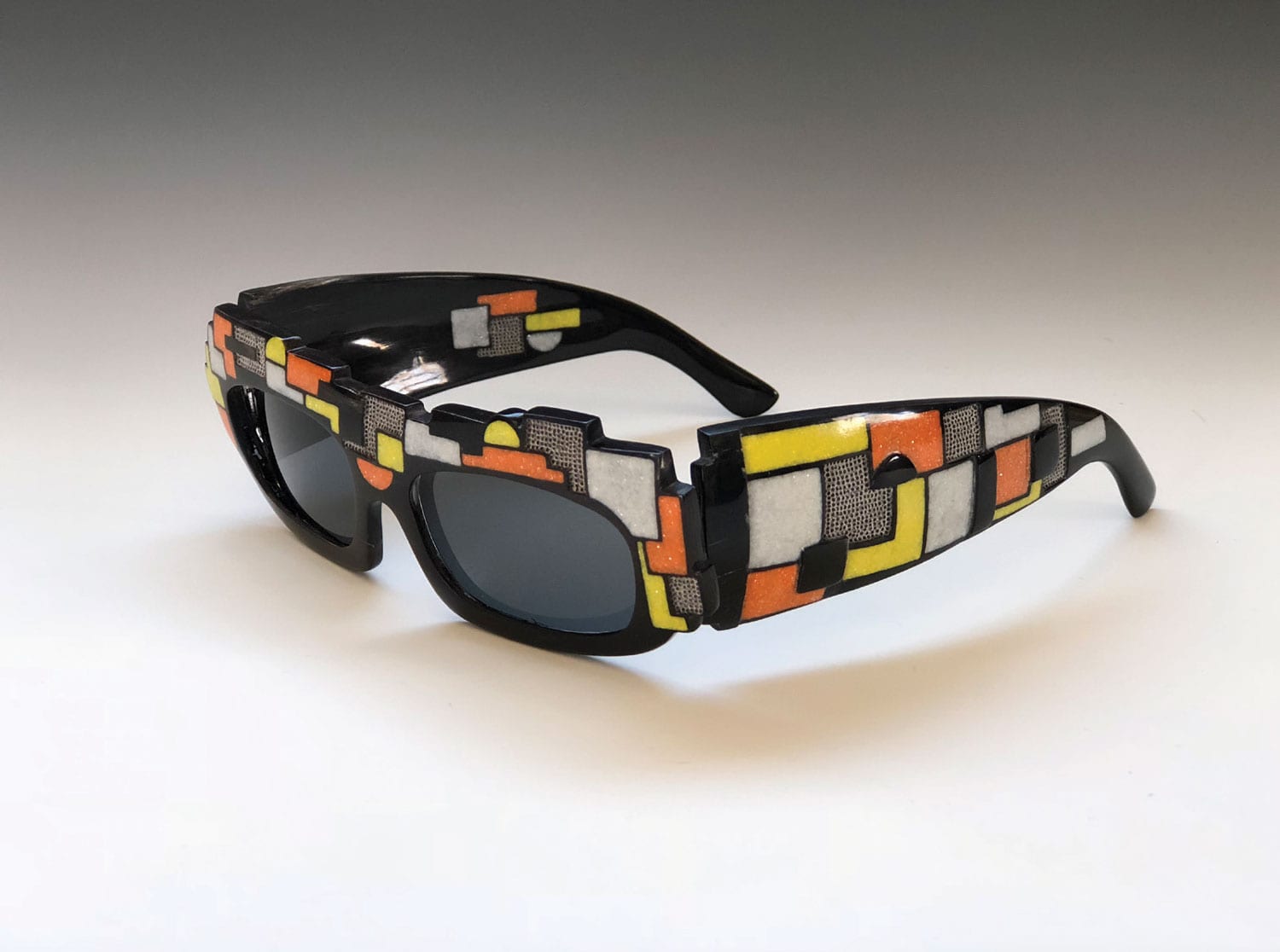 Pourier’s first creation on buffalo horn was a pair of Morning Star earrings. Since then, he’s created both traditional items and more modern pieces, including belts, sunglasses, thimbles, and boxes. “The elders told me to try everything,” he says, “so there are more interesting things to come.” The concha belt, titled Winyan Wánakiksin (Women Defenders of Others), (top left) won Best of Show during the 2018 Santa Fe Indian Market.

As part of his reentry into Oglala Lakota culture, Pourier began learning about traditional designs. And he started spending time with people who carved elk antlers. “One guy handed me a piece of antler and let me try carving on it,” he says. “And that was the beginning.” 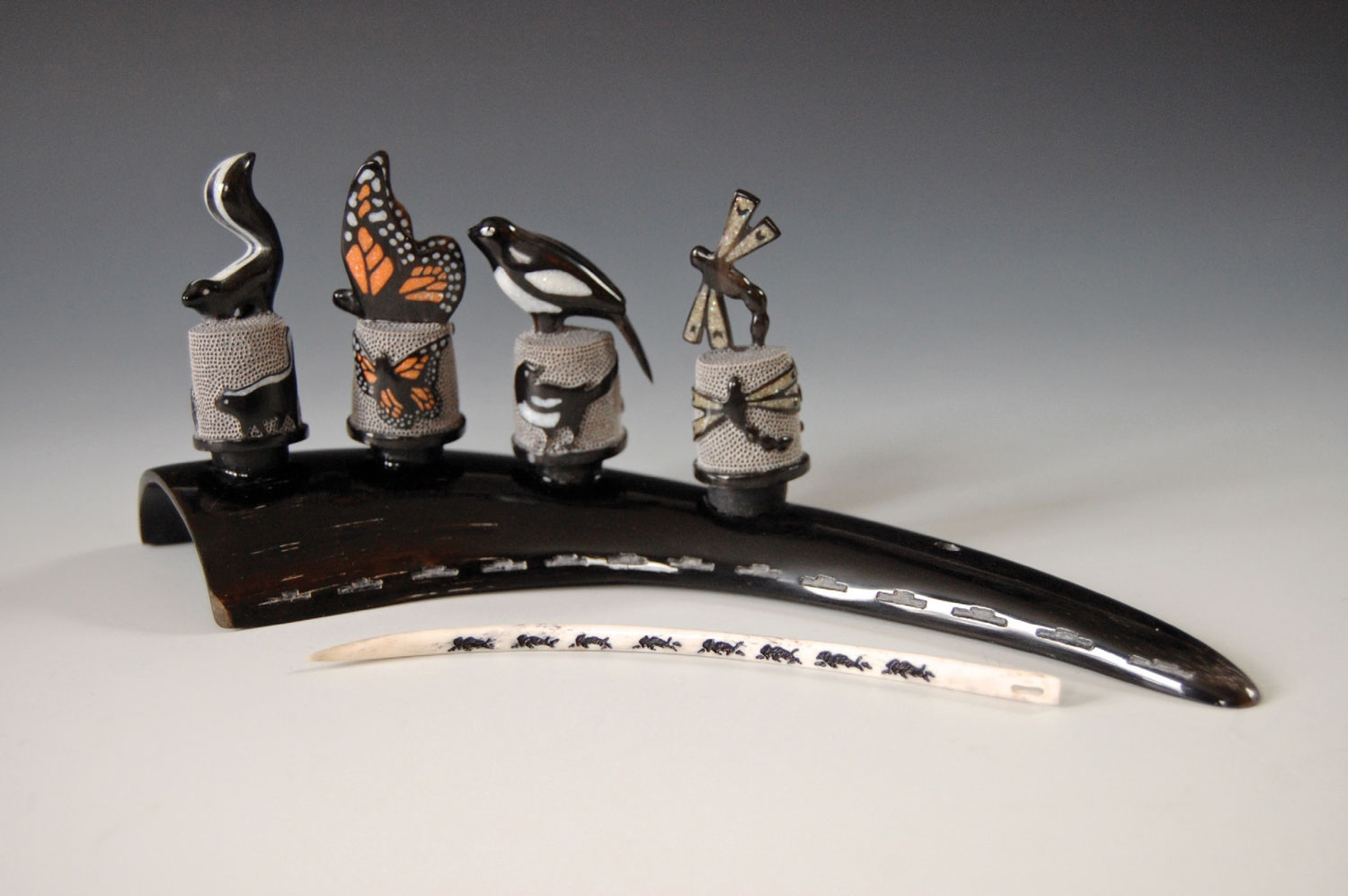 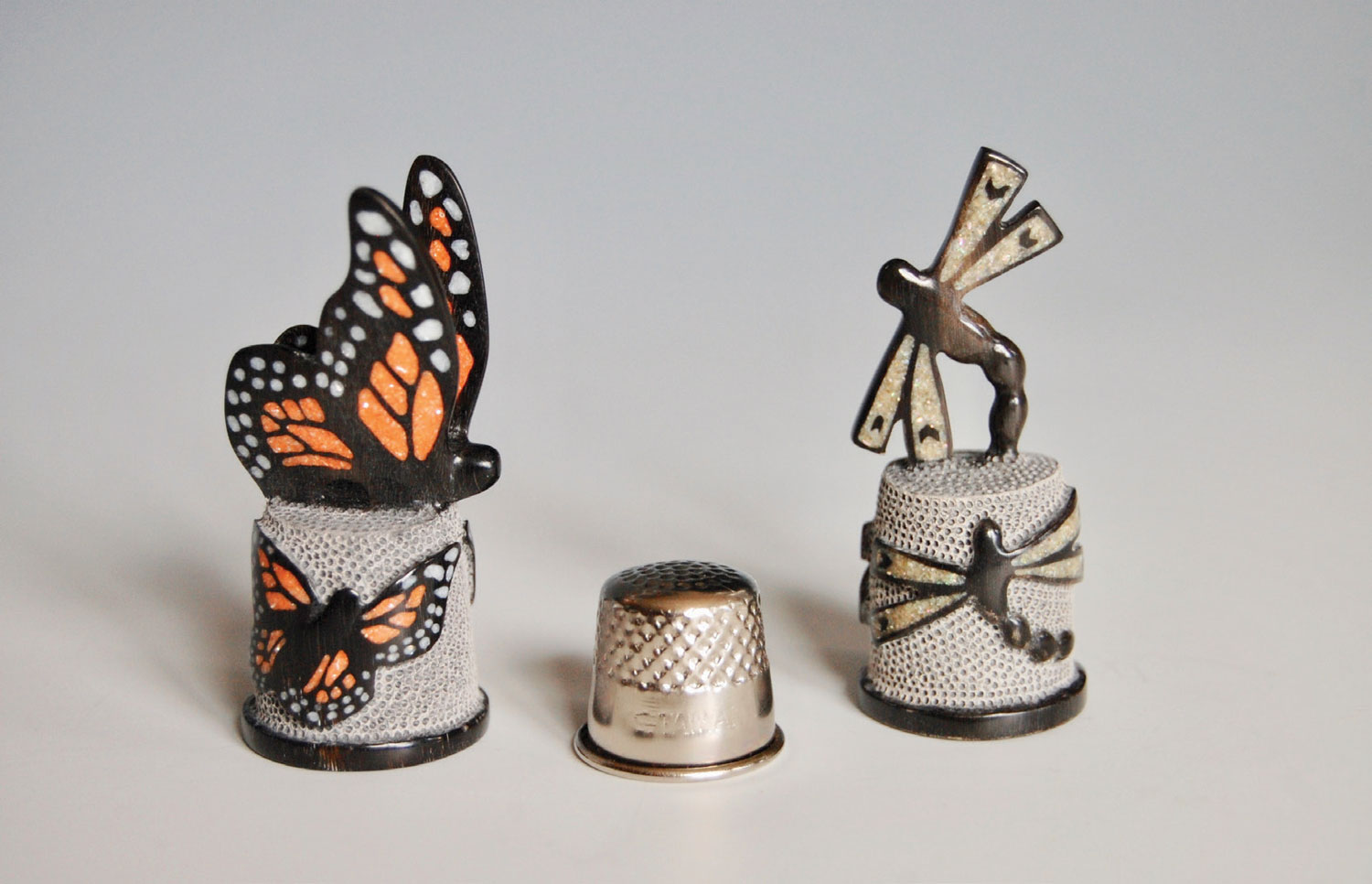 Initially, he worked from others’ designs, but he knew he would eventually have to do his own thing. That’s when he tried a piece of buffalo horn. “The results were amazing,” he says. “And I just stuck with buffalo horn from then on.” 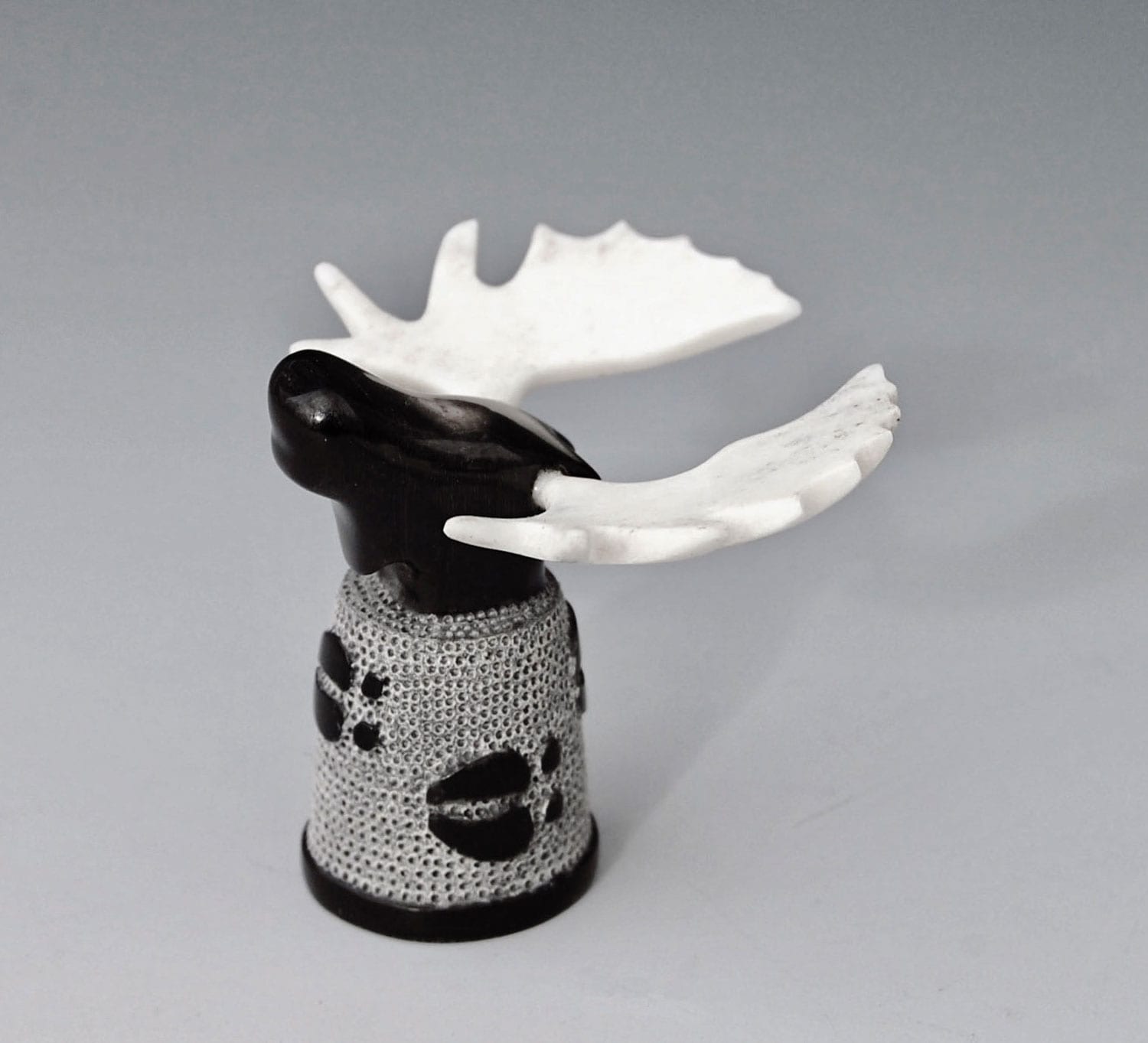 Pourier inlays designs on the horn with bits of sandstone, lapis, shell, and garnet, which he gathers in the Badlands, near his home on the Pine Ridge Reservation in South Dakota. “We do a lot of rock hunting,” he says. “We go out and have flocks of sandhill cranes fly over and hear the coyotes howl. We’re really lucky. Those simple things make us grateful and remind us not to take anything for granted.” 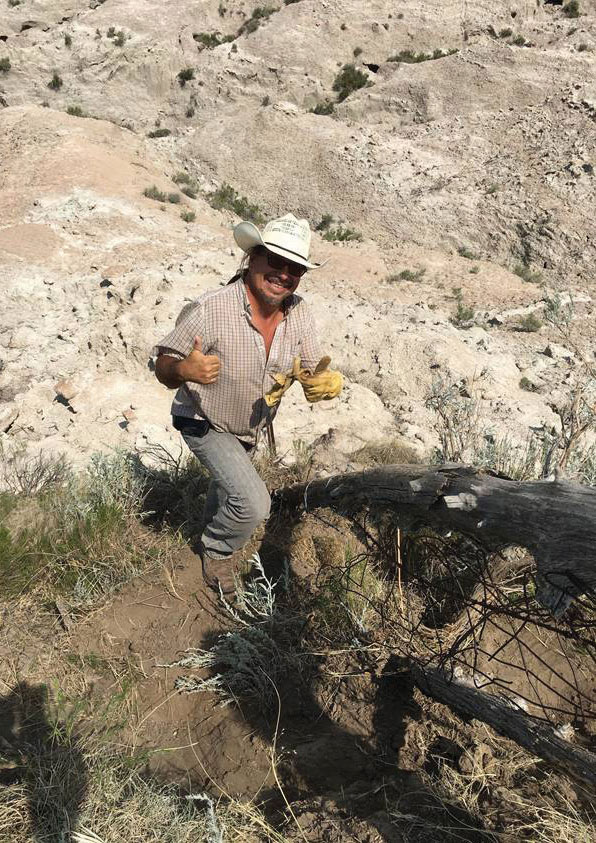 Pourier gathers sandstone, mother of pearl, and semi-precious stones in the Badlands of the Pine Ridge Reservation. In historical times, materials were gathered locally and obtained through a trade network that stretched across North America, from the Arctic Circle to what is now Mexico.

While his materials and some design elements are traditional, his themes are not. “I don’t do images from the 1800s,” he says. “That’s my ancestors’ story. They chased the buffalo. They had war scenes to draw. But that’s not my story. I have my own story to tell.”

For many months prior to creating the award-winning belt for Indian Market, titled Winyan Wánakiksin, which translates to “women as defenders of others,” Pourier spent hours researching, interviewing, and collaborating with eight Native American women to create a design that reflects on “the political climate, the power of women, contemporary Native issues, and a shift in the Native art world that combines beauty with advocacy,” according to the Native Arts and Culture Foundation. Each individual portrait panel took about two weeks to complete. 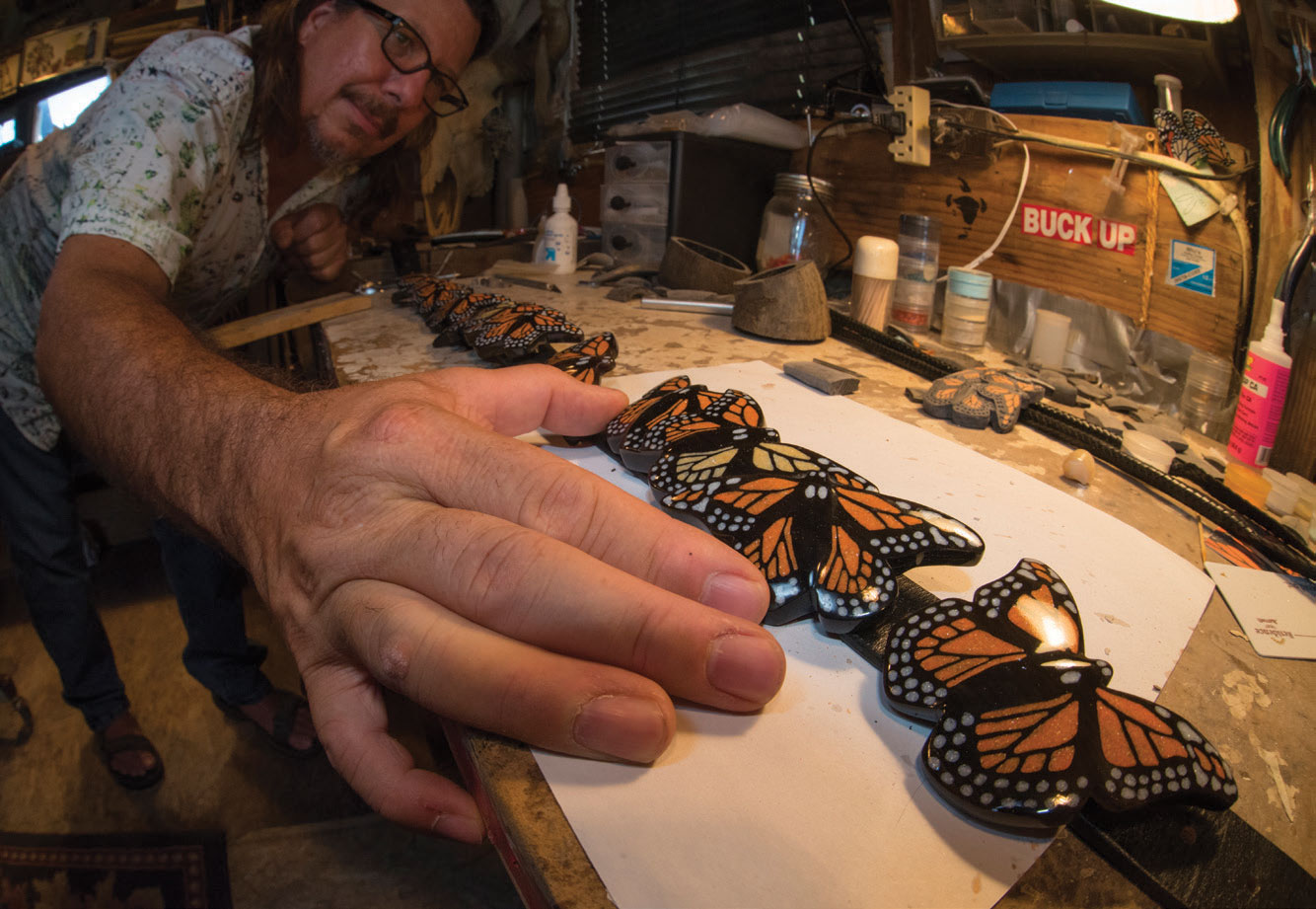 The artist at work on Monarch Nation, a butterfly belt. Photos: ©WWF-US/Clay Bolt 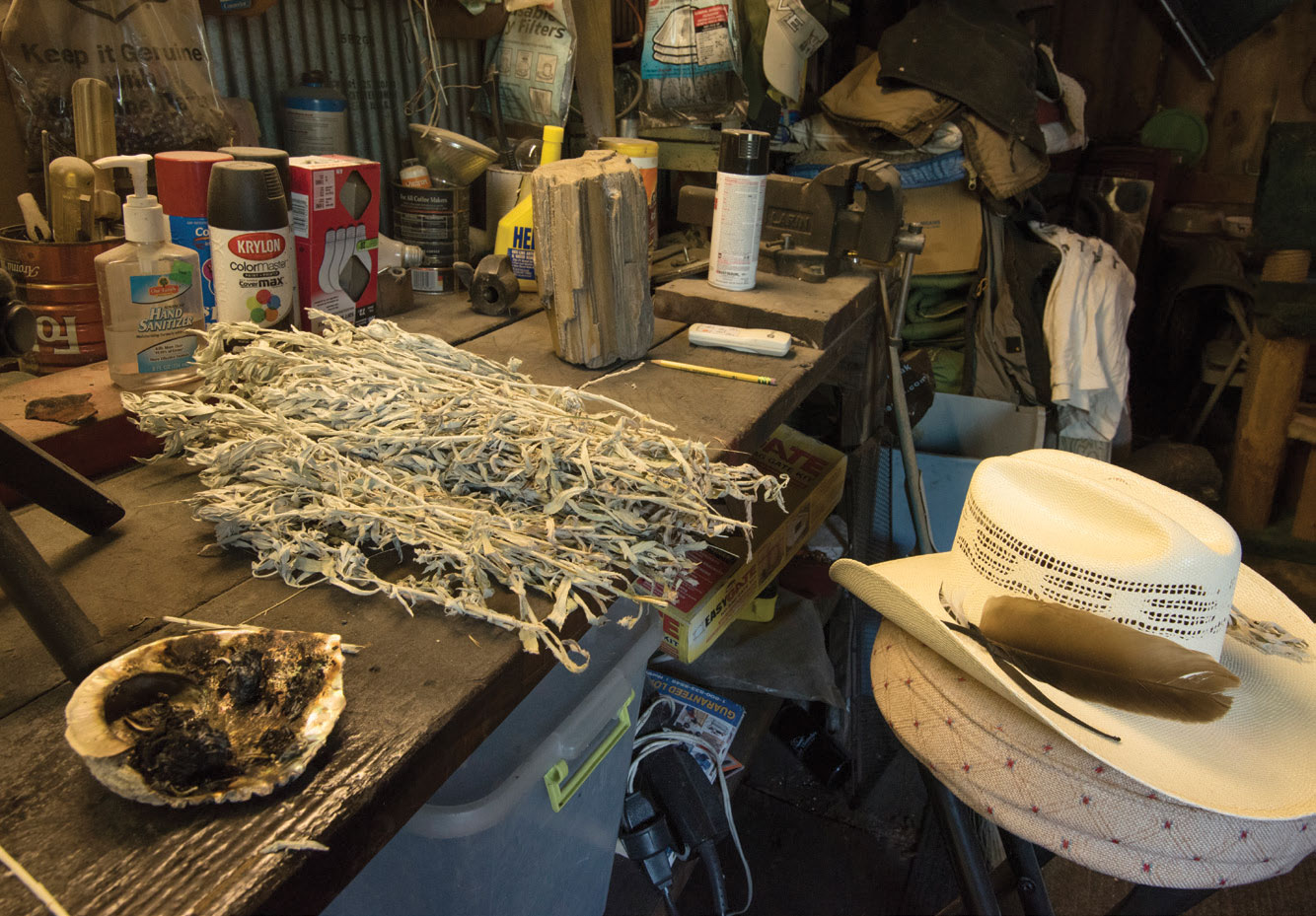 Pourier’s studio is located on the Pine Ridge Reservation in South Dakota.

“I’m living in the time of the Me Too movement, and I’m trying to bring awareness to that. These are issues and concerns that artists deal with. And that’s what we try to do with our work. We try to educate, to heal, and to bring awareness of this human journey that we’re all on.” 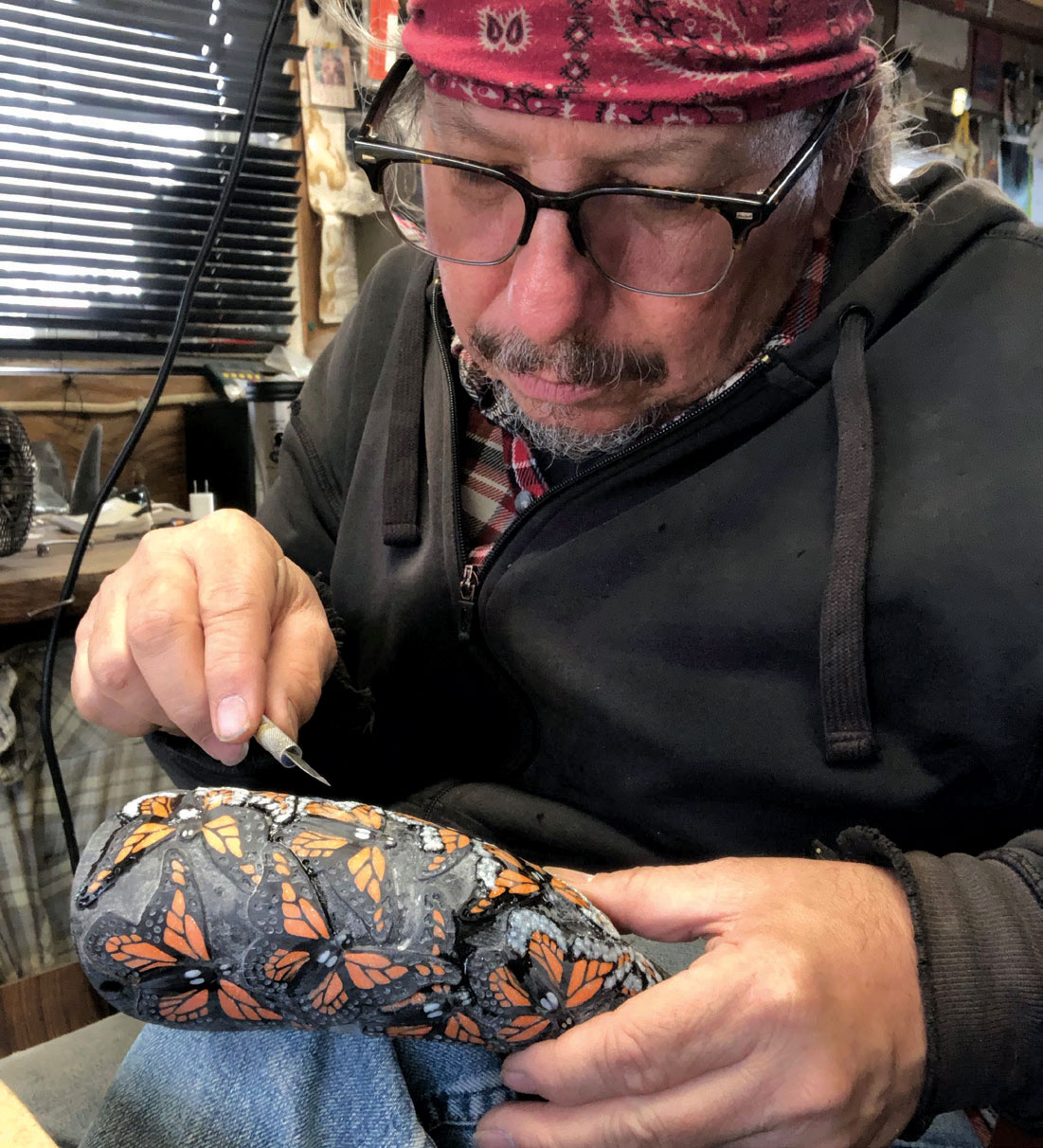 The artist works on an inlaid sculpture. “We were the only ones at the shows with this material and this type of art,” Pourier says, “so, we had to educate everybody we saw. That it wasn’t plastic, and it wasn’t painted. That it was a traditional material that we’ve always used.” 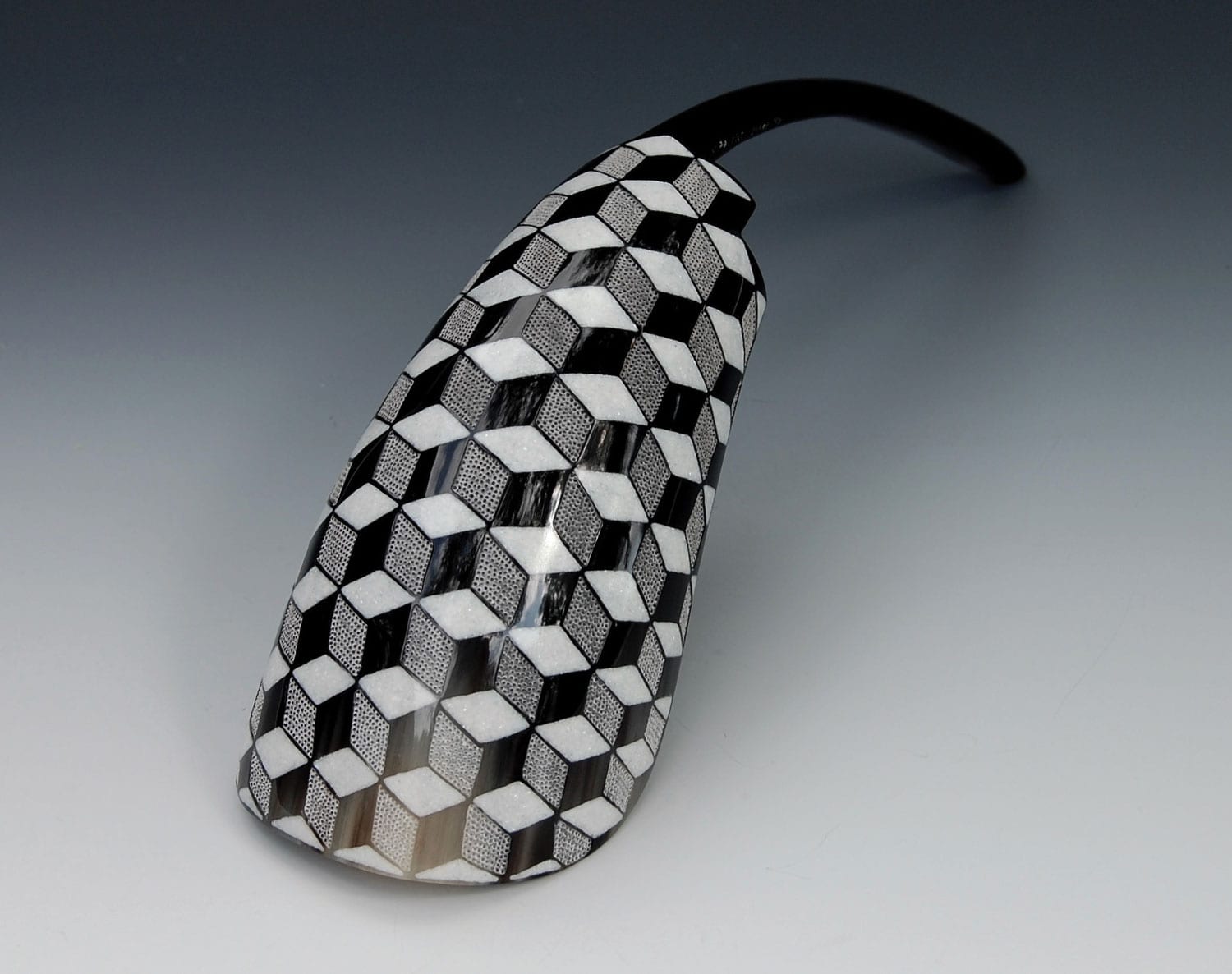 Pourier’s Escher-ish, a spoon inspired by the art of M.C. Escher, won the Innovation Award at Santa Fe Indian Market in 2010. 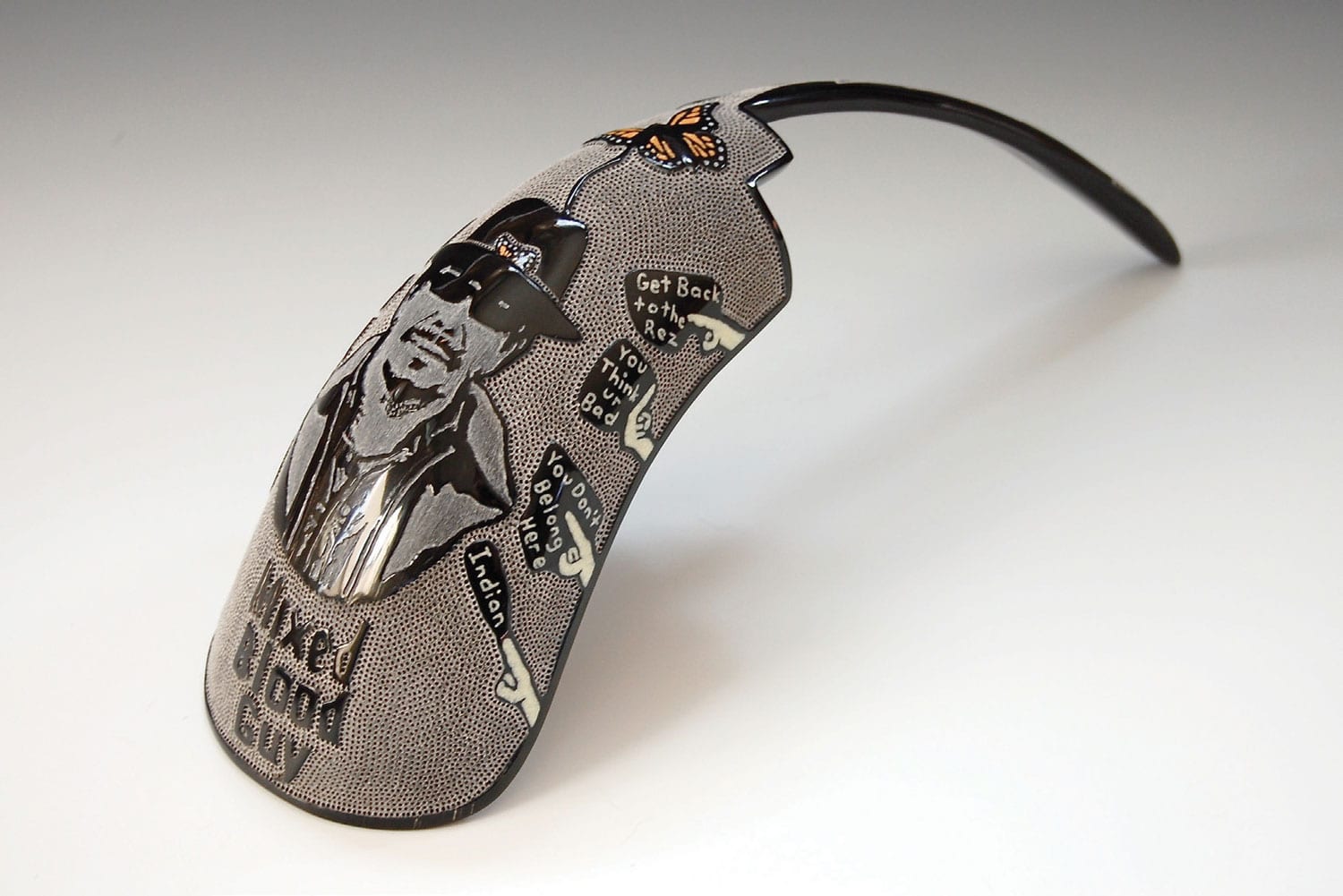 Mixed Blood Guy, a traditional buffalo horn spoon with a portrait of the artist. Pourier’s turn toward more political and provocative work has brought a deeper connection with viewers and collectors. “We talk about my work,” he says, “but we also talk about being human and how things can affect us. It’s pretty awesome to be able to draw people in and maybe create some kind of understanding.”