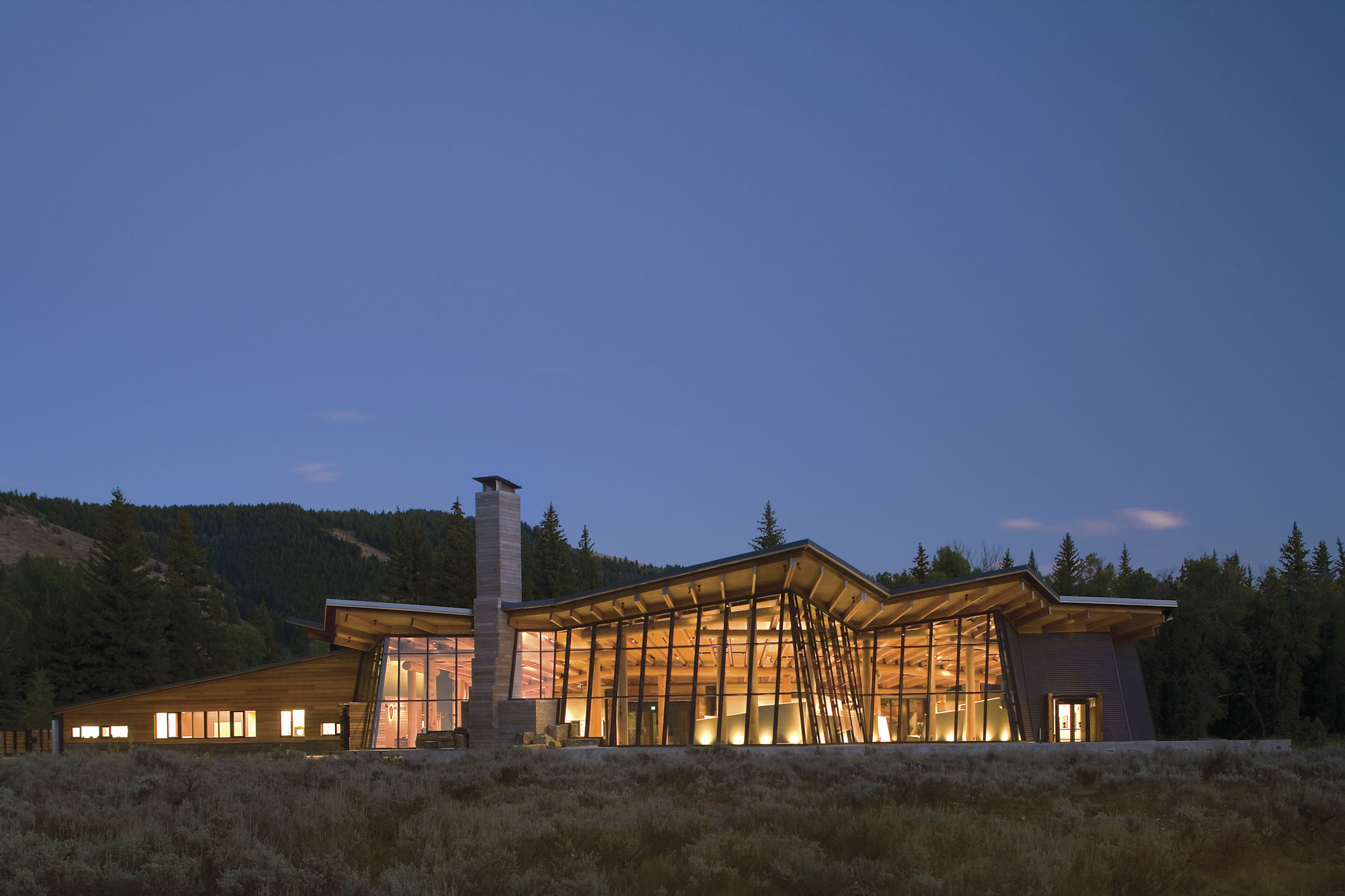 The grounds were painstakingly replanted with native vegetation.

30 May Man & Nature Under One Roof

“THERE IS NOTHING SO AMERICAN AS OUR NATIONAL PARKS,” said President Franklin D. Roosevelt. And there is no American mountain range so iconic as the Tetons. Rising 7,000 feet above the valley floor, the Tetons’ jagged silhouette inspires awe in legions of visitors each year. The Tetons are our mountains, protected as they are within Grand Teton National Park (GTNP). Thanks to the new 22,000-square-foot Craig Thomas Discovery and Visitor Center in Moose, Wyoming, we now have a portal, which, once entered, will forever change the way we experience our park.

Named for the Wyoming Senator whose persistence helped make it a reality, the visitor center is a monumental work of modern, eco-conscious architecture, designed by Peter Bohlin, of Bohlin Cywinski Jackson, that houses a cutting-edge, interactive exhibit, designed by Ralph Appelbaum Associates. At a cost of $18 million, more than half of which was raised by non-government organizations, the Grand Teton National Park Foundation and the Grand Teton Association, the building is a model of public-private partnership. It sets a standard for such partnerships that will be hard to beat.

The cathedral group of jagged, toothlike peaks forming the heart of the Tetons inspired Bohlin’s design, and the structure is itself a cathedral in which to contemplate the park’s natural beauty. Although one’s experience of the building begins humbly enough — passing through a peaceful courtyard, flanked on either side by an arcade of log columns — walking through the front door reveals the building’s grand purpose. “People stop dead in their tracks,” says Edward Riddell, a local photographer on the board of the Foundation. “The mountains are framed in a spectacular way.”

With a 30-foot-high window-wall anchored on the right by a monumental fireplace of stone and pre-cast concrete — fireplaces are a Bohlin signature — the building not only frames the Tetons, it propels you toward them in a way that dissolves the boundaries between indoors and out. The glass wall dynamically zigs and zags at odd angles, creating a feeling of vertigo, all of which echoes the Grand Tetons beyond. Stainless-steel strips embedded in the floor radiate across the exhibit hall and continue under the window-wall to the terrace. Each identifies the name and elevation of a major peak.

Even the fireplace, which tempts one to climb it, penetrates the wall of glass. Creating an interplay between structure and landscape, every element of this stylistically modern center orients the visitor to the world outside. “It’s essential to have empathy for the landscape,” Bohlin says. “The building is rooted in the place, but also looks toward the future.” With approximately 4 million visitors to GTNP a year, the center’s future will be busy.

Beginning with a three-dimensional raised-relief map of the park, visitors are free to explore the varied sensory exhibits, which are organized thematically into Place, People, Preservation and Mountaineering. Appelbaum’s design team, like Bohlin’s, was also inspired by the landscape, utilizing angles to mimic the Tetons. “We wanted to make sure that the exhibits prepare visitors for their experience of the park,” explains project director and lead designer Tim Ventimiglia, of Ralph Appelbaum Associates.

The exhibit is united by three “Video Rivers.” Flowing in three sections within the exhibit hall floor, these Video Rivers are a metaphor for the Snake River, which flows through Jackson Hole. Stand atop one of the 16-foot-long by 4-foot-wide video screens and the perspective is dizzying. Aerial, time lapse and slow-motion footage, combined with an ambient audio track, capture the seasons and natural beauty of GTNP. One moment you’re standing on a stream as it gurgles through ice, the next you’re flying past the Tetons, or engulfed in a forest fire. “You walk onto a magical pool of imagery that flows under your feet,” says Ventimiglia.

As producer of the Video Rivers, David Vassar, of Backcountry Pictures, had creative freedom. “You’re framing dreamscapes as opposed to didactic images,” he says. “It frees up people to look at nature in a fresh way.” The Rivers represent a design revolution — they have never been done before — made feasible because of a visionary decision by the Foundation to require architects and exhibit designers to bid in teams. For the Video Rivers, for example, nine high-definition projectors are embedded in the floor and rear-project through specially designed glass screens, an exhibit feature that the architect incorporated in the original plans. This collaborative spirit is evident throughout the center.

If the National Parks are, as Wallace Stegner said, “ … absolutely American, absolutely Democratic, they reflect us at our best,” then the Craig Thomas Discovery and Visitor Center succeeds in paying homage to that ideal.

Architect Peter Bohlin envisioned the entrance to the visitor center as a peaceful gathering place where the steps function as seating. Like a Greek temple, the shape of the courtyard is a golden rectangle. 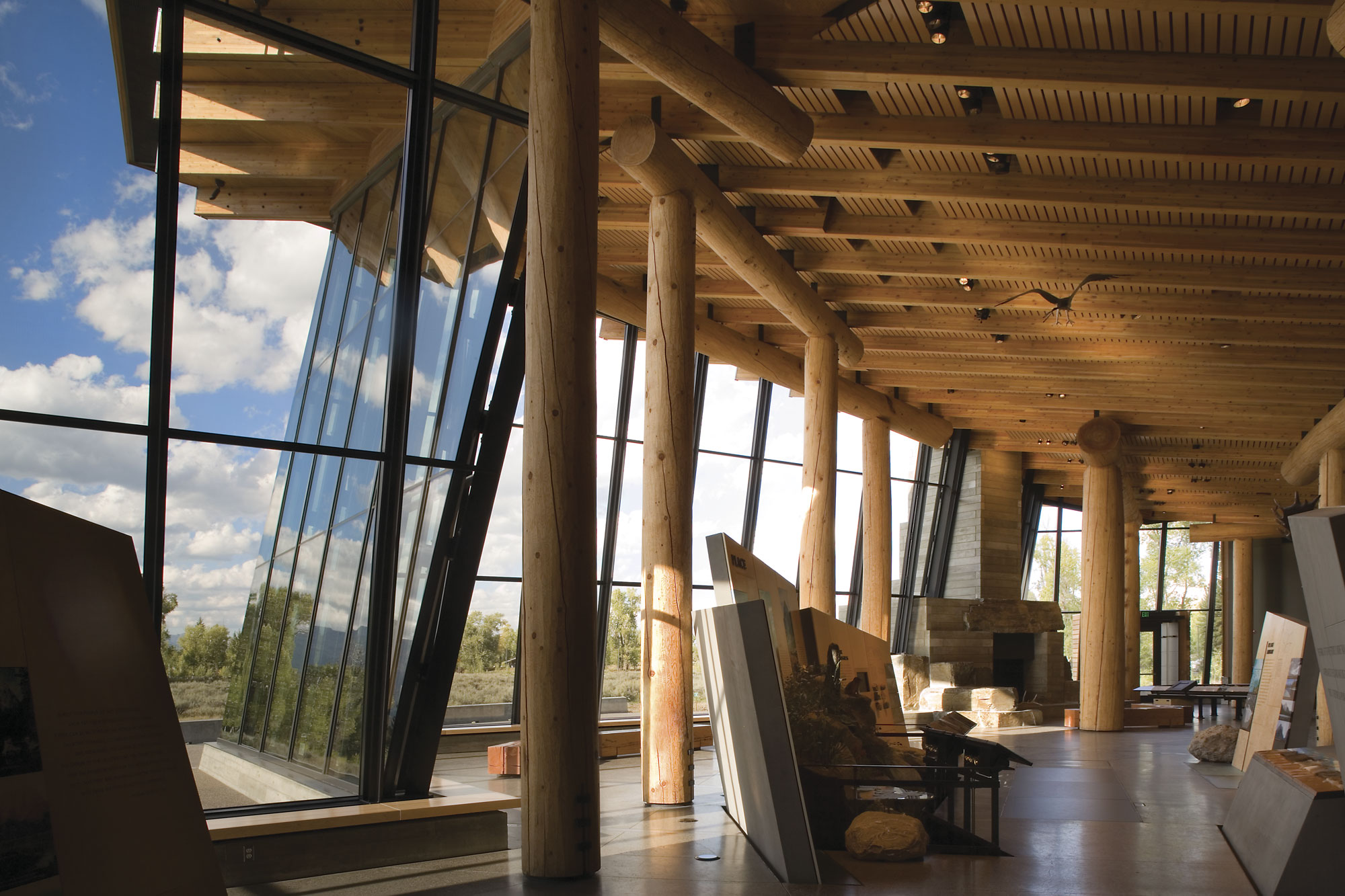 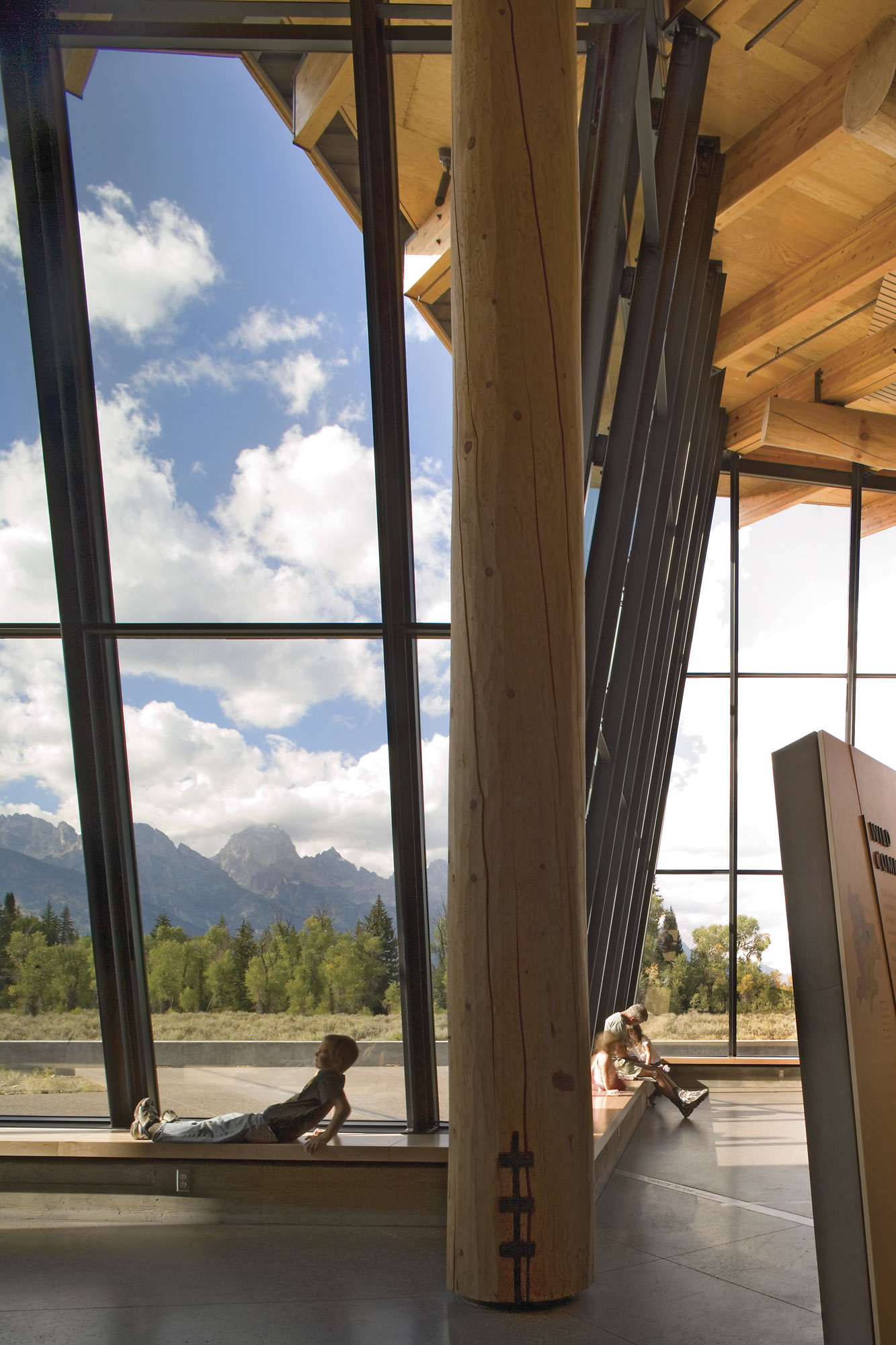 Children find the rivers irresistible, and they pique adults’ curiosity as to what they might experience in the park. 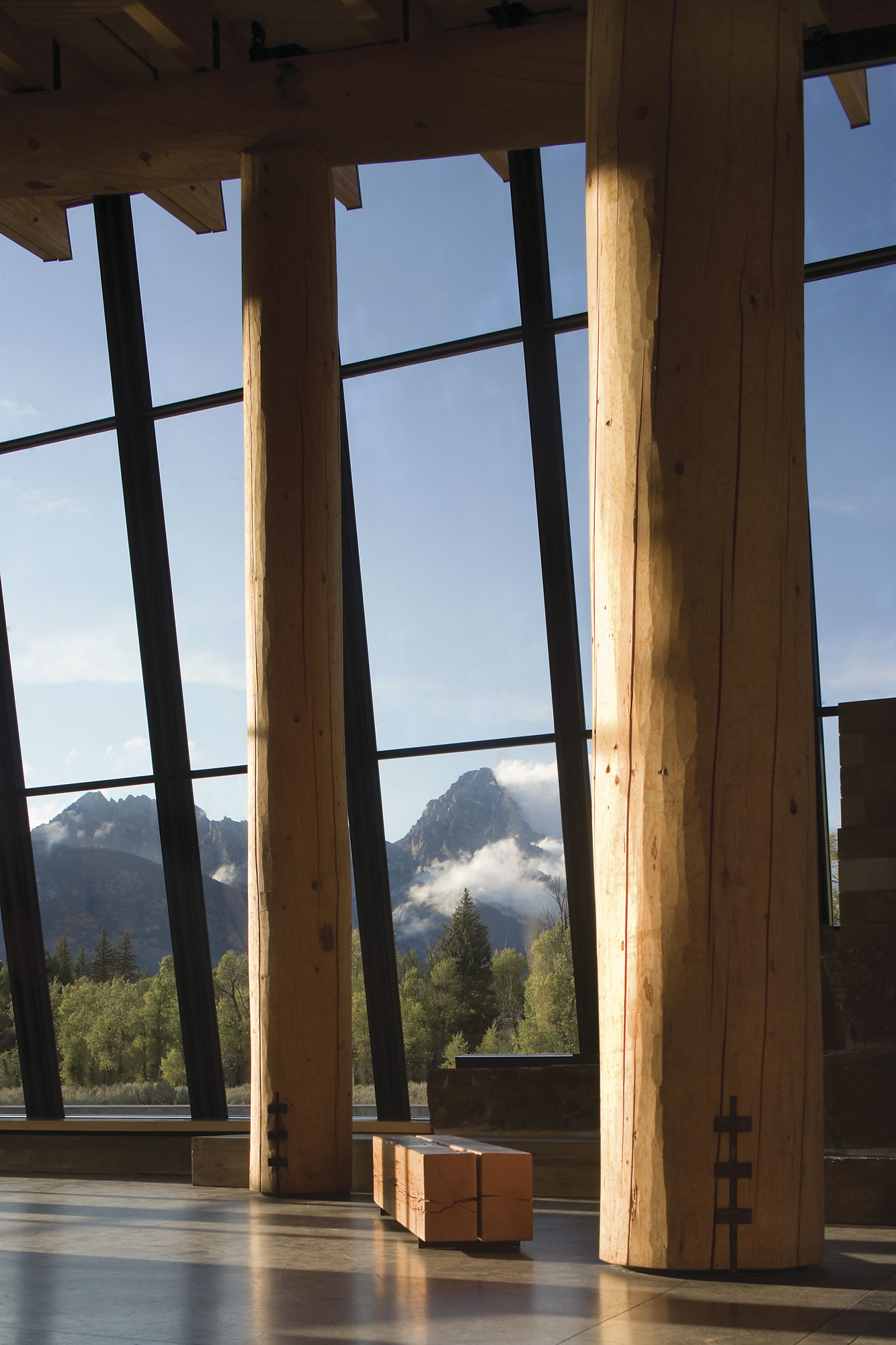 Throughout the interior, massive columns mimic the random nature of a forest. 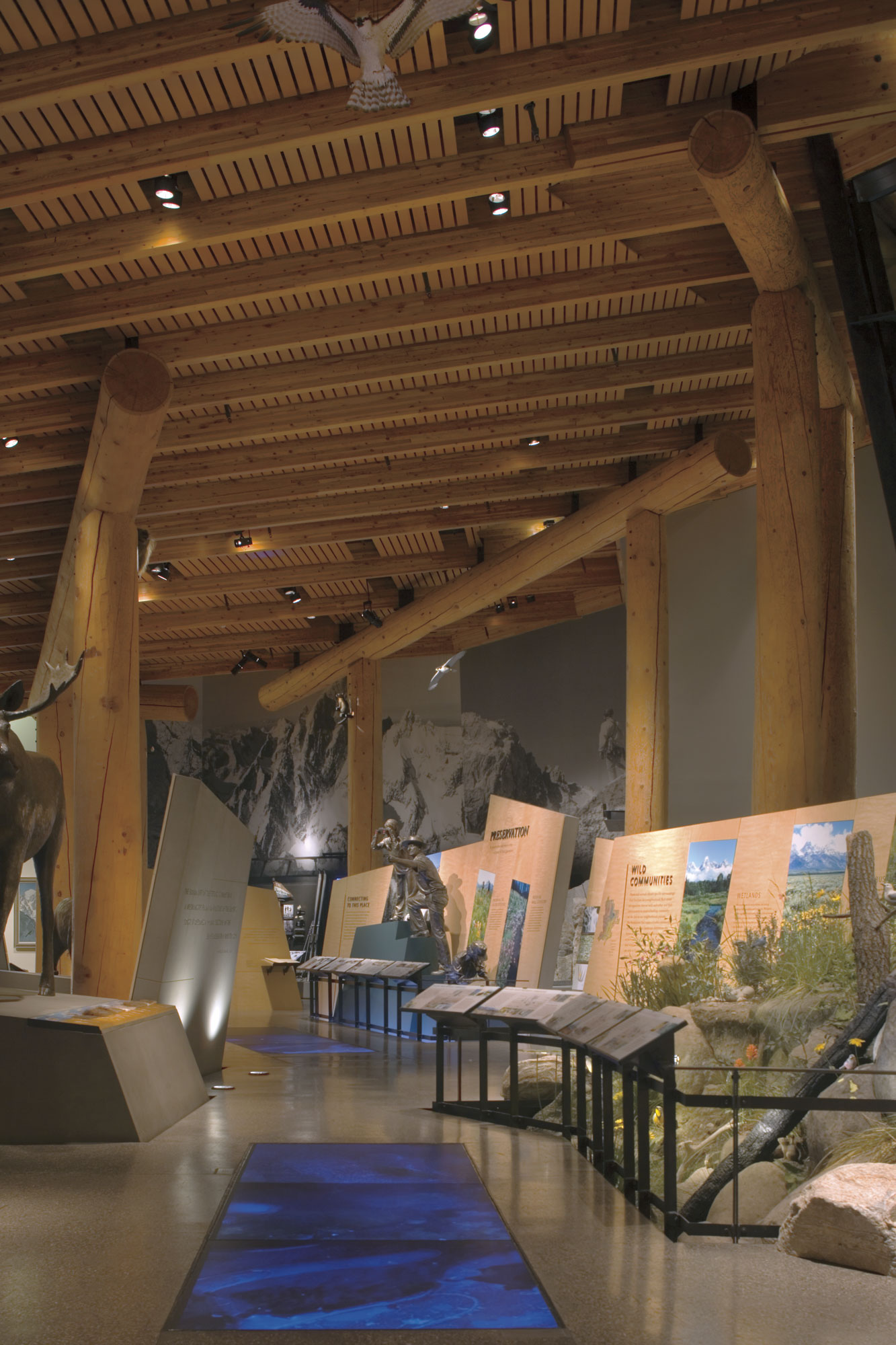 Standing atop one of the video rivers is an unrivaled sensory experience of sight, sound, and vertigo. 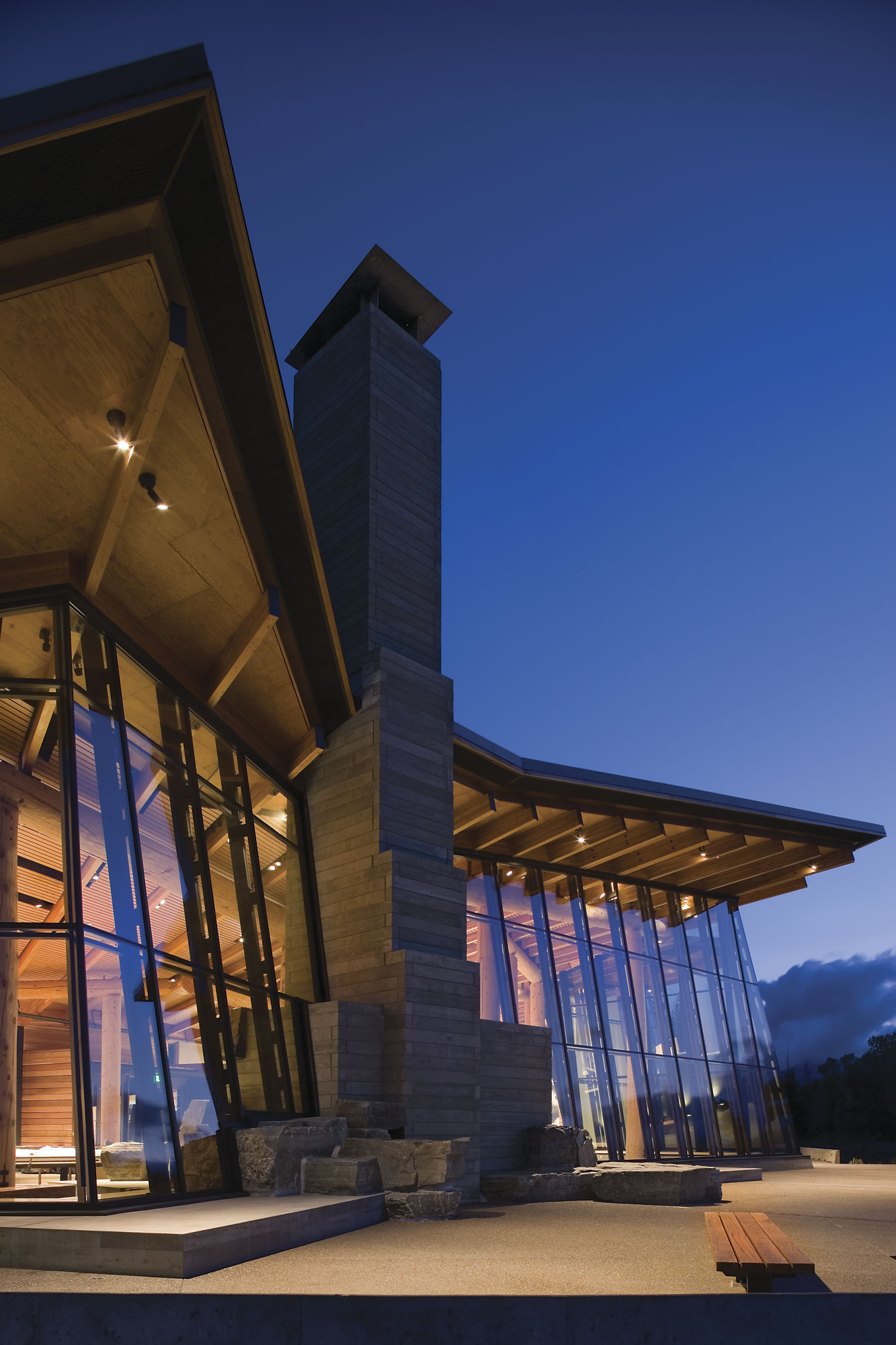 By tilting the glass window-wall Bohlin mitigated issues of reflection and the late afternoon sun. 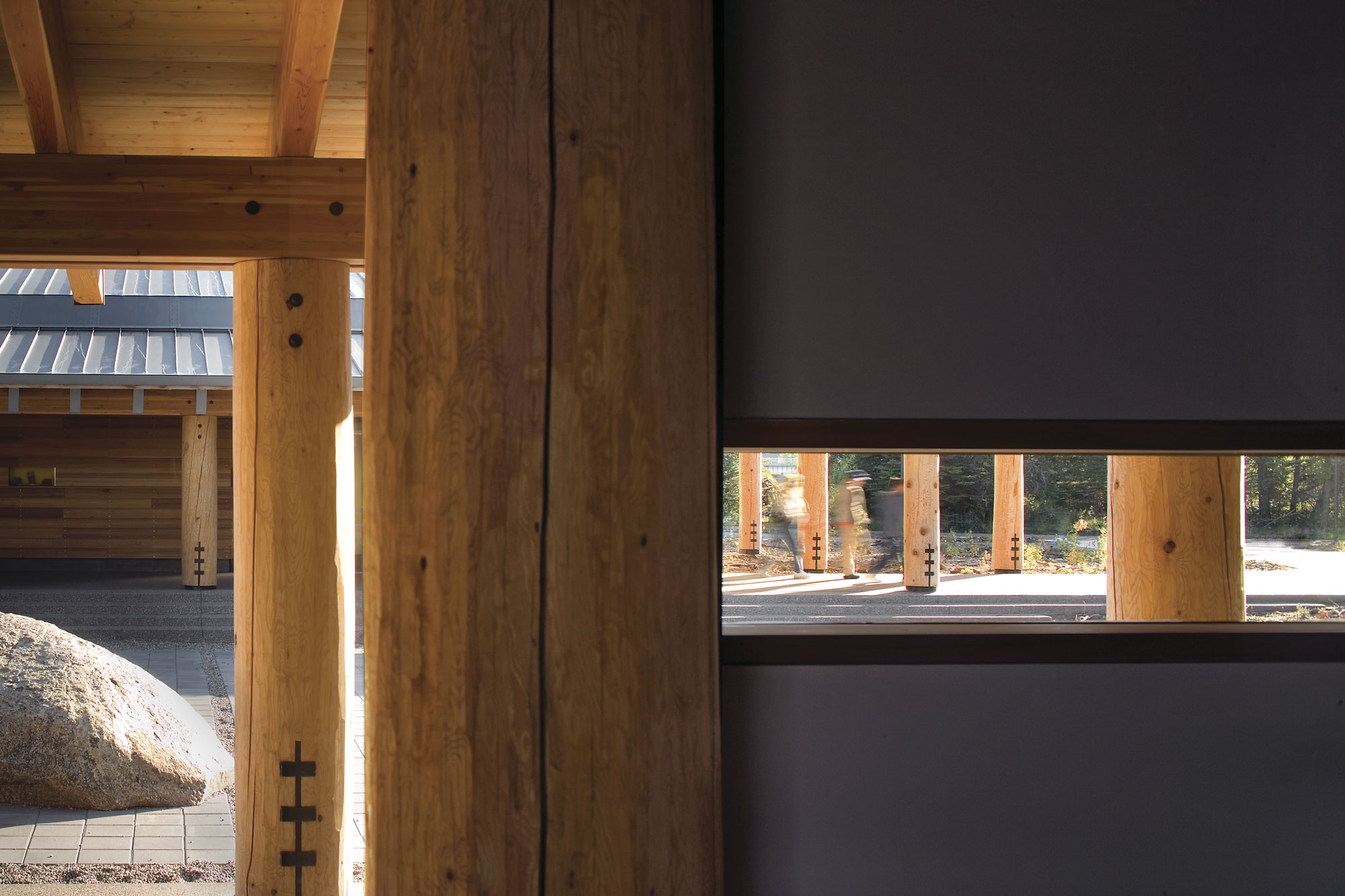 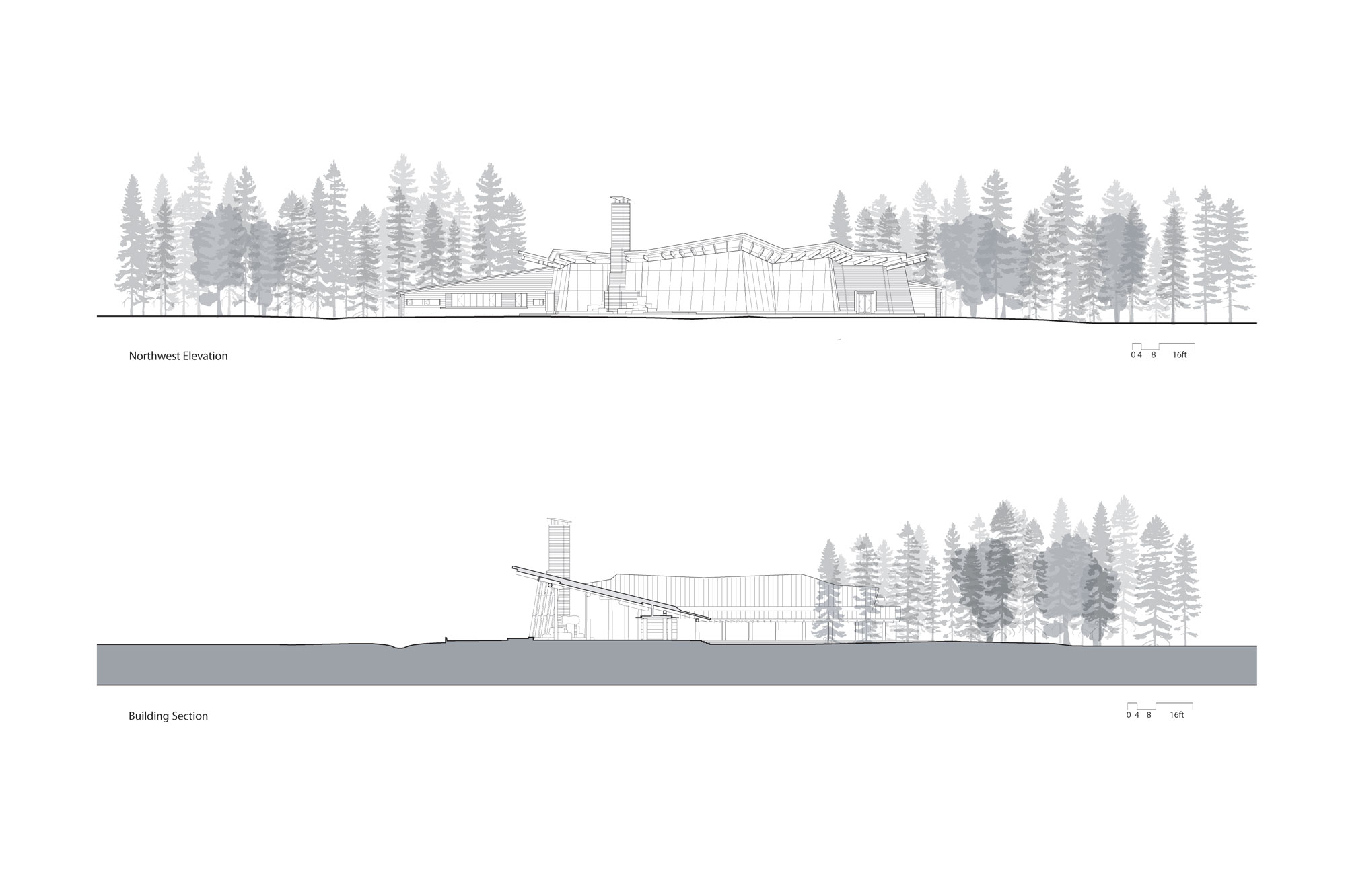