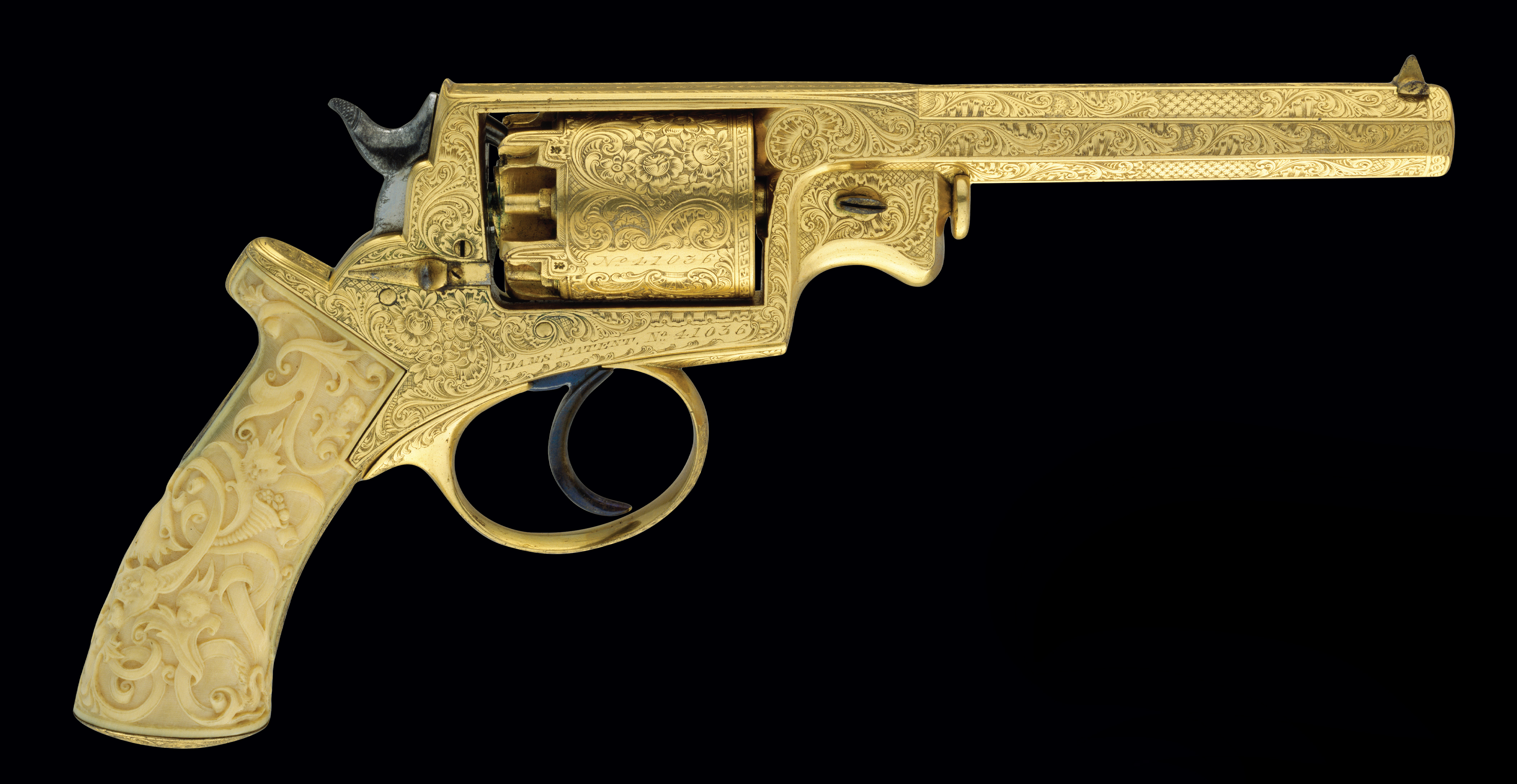 THE HISTORY OF ENGRAVING FIREARMS FITS HAND IN GLOVE WITH THE HISTORY OF WEAPONS, a past as entwined as the scrolling acanthus leaved etched onto them. In the 16th century, firearms frequently sported engraved foliage, lettering, animals, and hunting scenes, exhibiting embellishments of exquisite decoration and personal narratives reflecting their owners.

An exemplary display of this unique art form is at the Nevada Museum of Art through February 16, making available the world-renowned Robert M. Lee collection of firearms. Lee [1927–2016] said he always considered the tastefully ornamented gun as the epitome of art, and this exhibition illustrates his perspective.

“Mr. Lee’s arms collection is world-class, but it is rarely, if ever, made available for public viewing,” says Ann Wolfe, a curator with the Nevada Museum of Art. “This is the largest public presentation of the collection ever.” 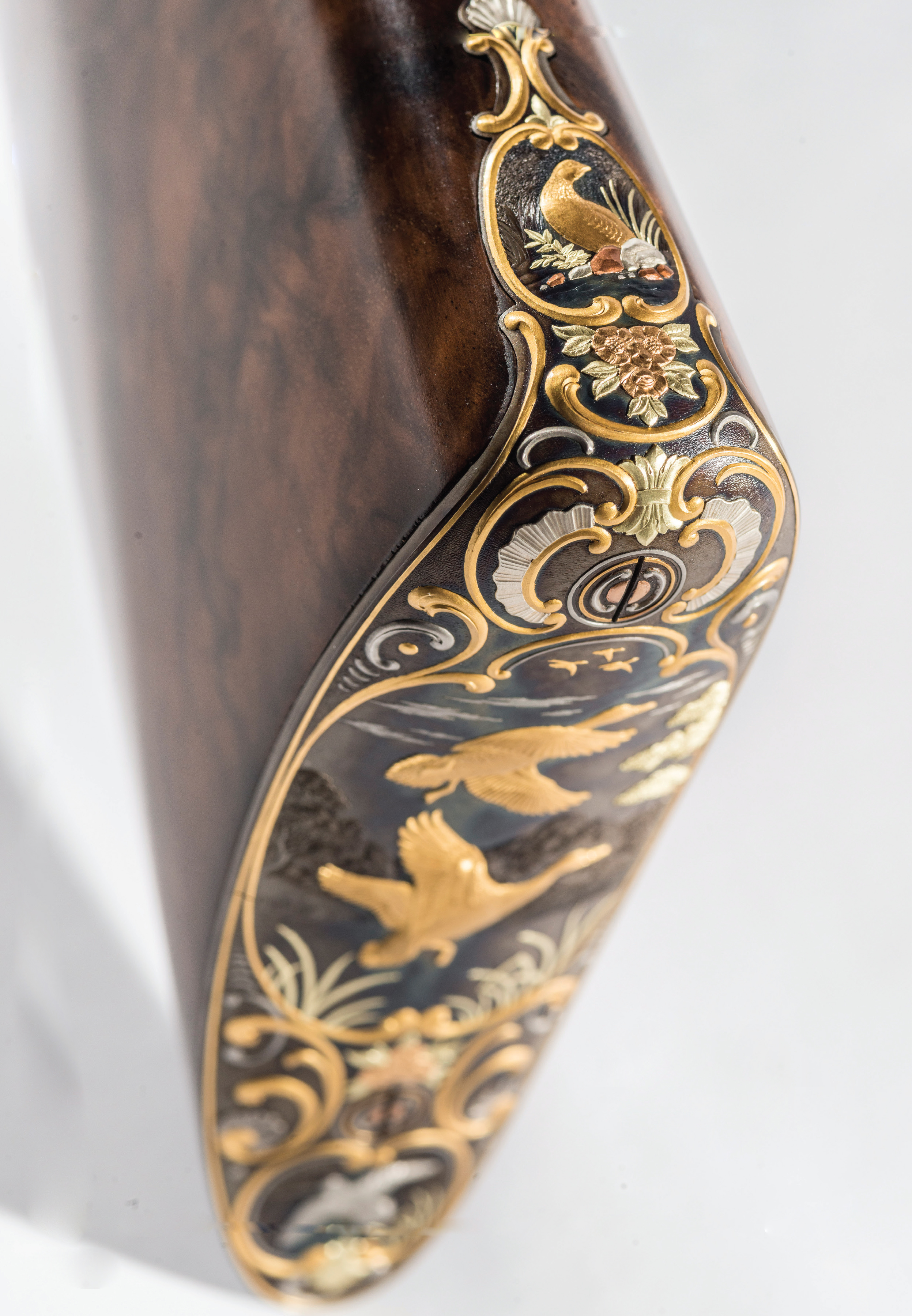 On display during Decorative Arms: Treasures from the Robert M. Lee Collection are more than 130 items that focus on the artistry of engraving and the role of the engraver — with a special emphasis on how historical engraving traditions inform and influence the craftsmanship of today, Wolfe explains. Approximately 12 to 15 historic arms are included in the collection, with some dating back as early as 1590 and the early 1600s, while others date from the 18th and 19th centuries. Many of these historic guns appear in jewel-box wall cases with the intent to view them within sight of more modern firearms. The more recent examples are grouped on pedestals either by engraver or nationality. Some of the engravers highlighted include Ken C. Hunt, J.P. and A.M. Brown (known as the as the Brown Brothers), Gianfranco Pedersoli, Rashid el Hadi, Alain Lovenberg, and Frederique Lepinois. 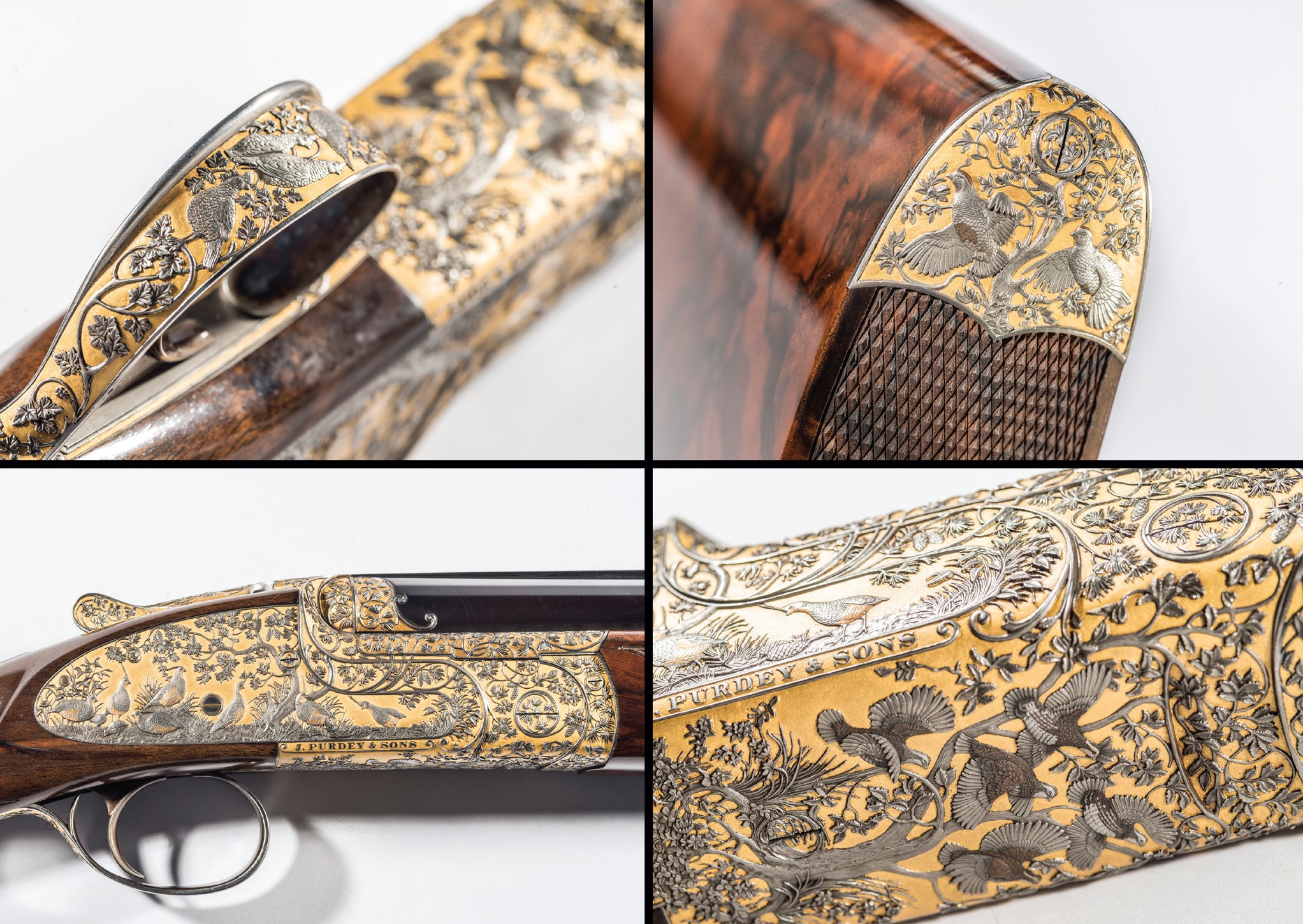 The Quail Gun, Over and Under Shotgun | Built from 2005-2009 | James Purdey & Sons, London, England | Engraved by Alain Lovenberg

Wolfe notes a few themes to watch for include historical sporting arms and the European roots of the hunting life; the tools used in intricate carving and engraving; gunsmiths and the role craftsmanship; precious metals found in firearms; and understanding the life’s work of Lee as a collector and his love for engraved firearms.

“The oldest firearm in the exhibition is a finely crafted and decorated Wheelock Masterpiece rifle from Nuremberg, made in 1627,” Wolfe says, adding that it’s made of steel, fruitwood, bone, and iron. “During the 17th century, Nuremberg was considered one of the major centers for firearms manufacturing in the German lands of Bavaria, Saxony, and Austria,” she says. “After many years of apprenticeship training with master craftsman, a young gunmaker would submit his finished work to the Nuremberg guild authorities with the hopes of being named as a master himself.” This rifle bears an inscription inlaid in bone that reads, “With luck and God’s will may this be my masterpiece,” which suggests that it was submitted for approval to the Nuremberg guild authorities. Wolfe also notes that the maker’s name is unknown. “[The rifle] is decorated with inlaid friezes of horn engraved with serpentine leaf designs, and further engraved with motifs depicting classical warriors, reclining figures, cherubs, birds of prey, and hunting hounds chasing bears, hares, and a dragon,” she adds. 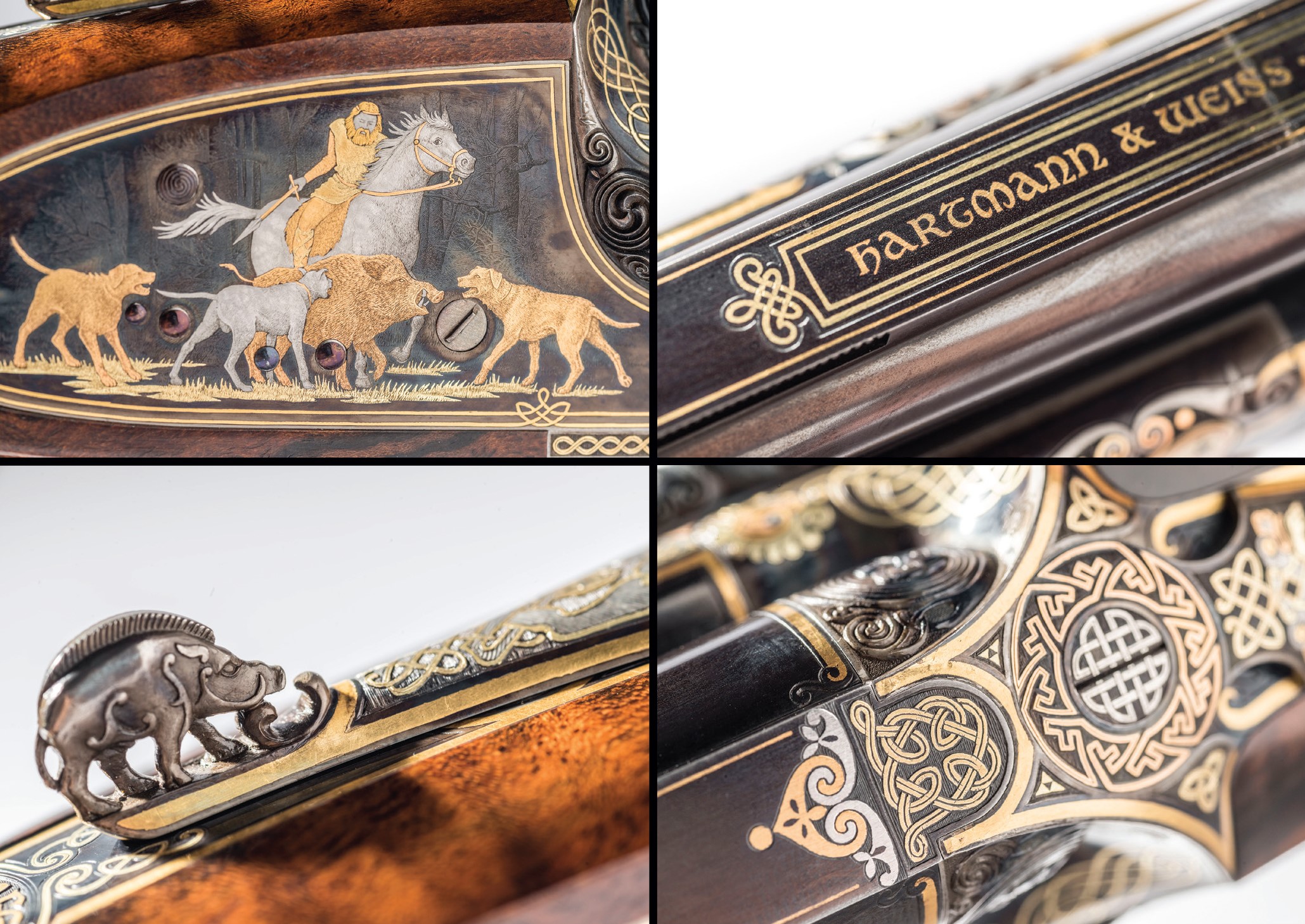 The Celtic, Over and Under Rifle | 2002 | Hartmann & Weiss, Hamburg, Germany | Engraved by Alain Lovenberg

Gordon Alcorn, a master engraver in Montana, has decorated firearms for more than a dozen years. He says the first step is to remove the bluing that is usually on the gun and keeps it from rusting. Once the owner chooses a style of engraving — which can be anything from simple scrolls to complicated hunting scenes or wildlife — he uses an air-assisted tool to etch the design onto the surface delicately.

In 1980, an engravers’ guild formed to keep the tradition of the craft alive. “Embellishing establishes pride of ownership,” Alcorn says. “All engraving is done by hand and can take up to 1,000 hours, depending on the intricacy of the scrollwork pattern and images used. Engraving is carrying on a tradition.”

Lee was a distinguished collector of fine automobiles and firearms, as well as a lifelong enthusiast of exploration, conservation, and hunting. While living in Angola in the 1960s, he operated Lee Expeditions, a guide service that brought foreign hunters to South-central Africa for the first time. While in Angola, he became instrumental in obtaining government protection for lions, cheetahs, black rhinos, and their habitats. In 1965, after returning to New York, Lee founded Hunting World Inc., a luxury goods brand known for designing and manufacturing fine luggage, clothing, watches, leather goods, and accessories. 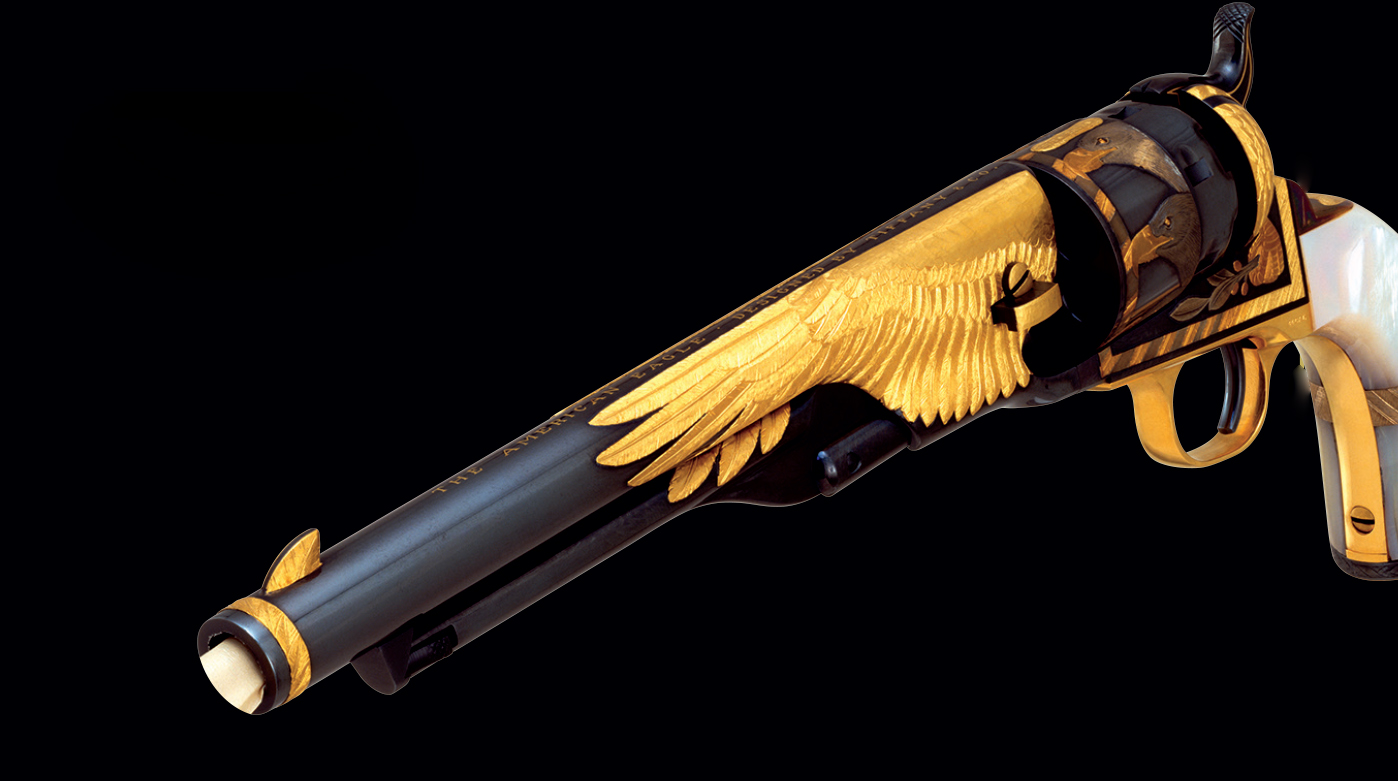 “There have been great patrons, collectors, buyers, and users of fine guns throughout history,” says Nigel Beaumont, the former chairman of James Purdey & Sons in London, a premier gunmaker with two centuries of history, and the appointed gun and rifle makers of the British and other European royal families. “Bob came along at a time when a ‘new age’ was beckoning and by his inquisitiveness, knowledge, and interest played a part in shaping contemporary gun-making,” he says.

Beaumont noted that Lee understood the interdependent nature of craft and art. “Just by looking, he could see the validity of what engineers, craftsmen, and artists were achieving; with this in mind, he sought out people who could satisfy his curiosity. Not only did he come to know the companies that make the guns, but he got to know and promote individual talent across the gun-making world.” 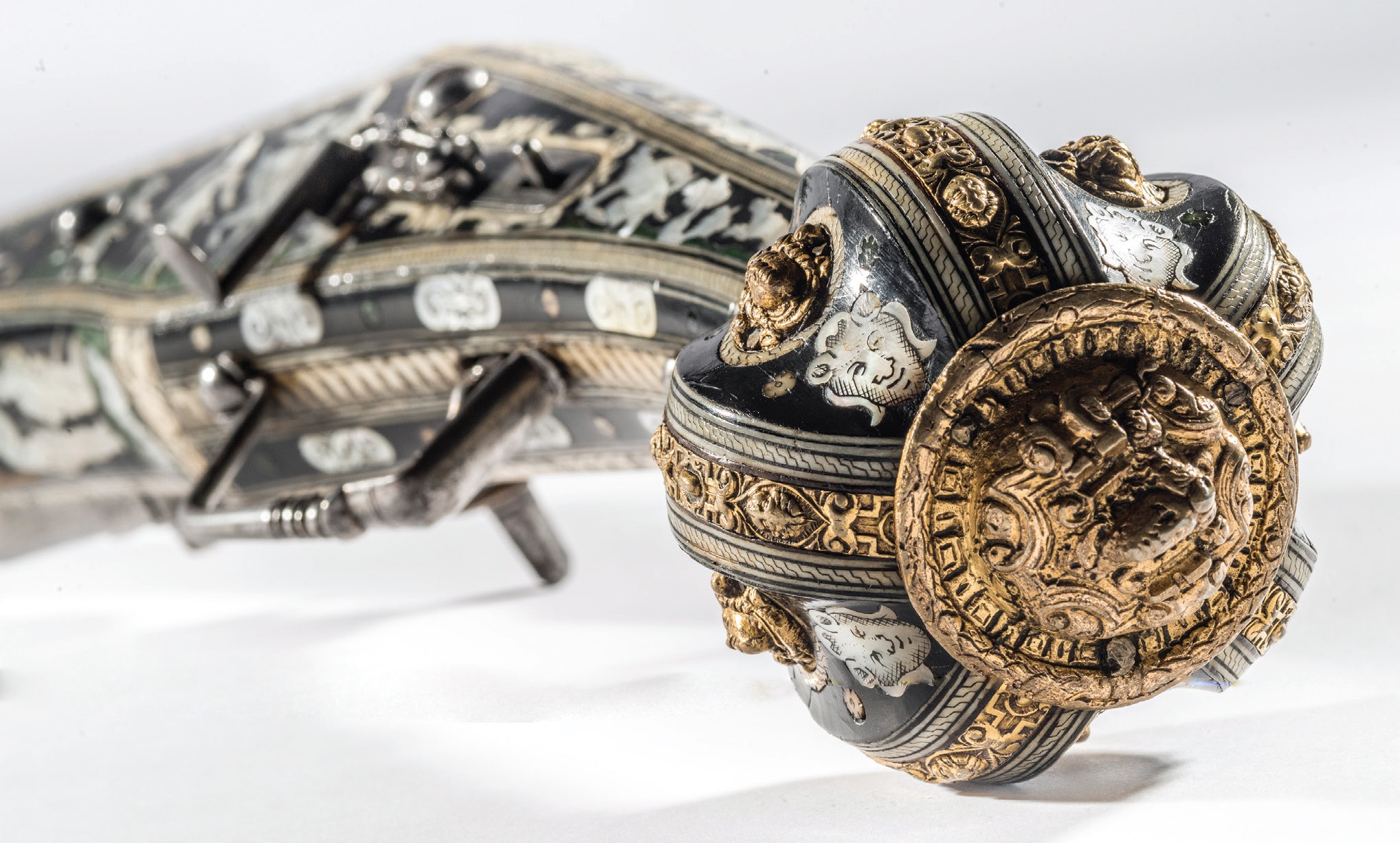 Wheel-Lock Puffer Pistol |Circa 1590 | Peter Danner, Georg Seidler, and the “Master of the Castles” | Engraver Unknown

Lee pursued collecting the art of engraving to its extreme. “The fine engravers of Britain responded, and the beautiful guns collected by Robert are always more refined, more technically excellent, and better designed,” Beaumont says. “This pursuit by Robert helped lift the standards of the makers of fine guns across many sporting gun-making companies worldwide. We are indebted to him for making us more aware and adaptable in pursuing our quest for those higher standards. We are now in the greatest ‘Golden Age’ of them all, and it is in no small measure that we see it in the influence of Robert Lee.”