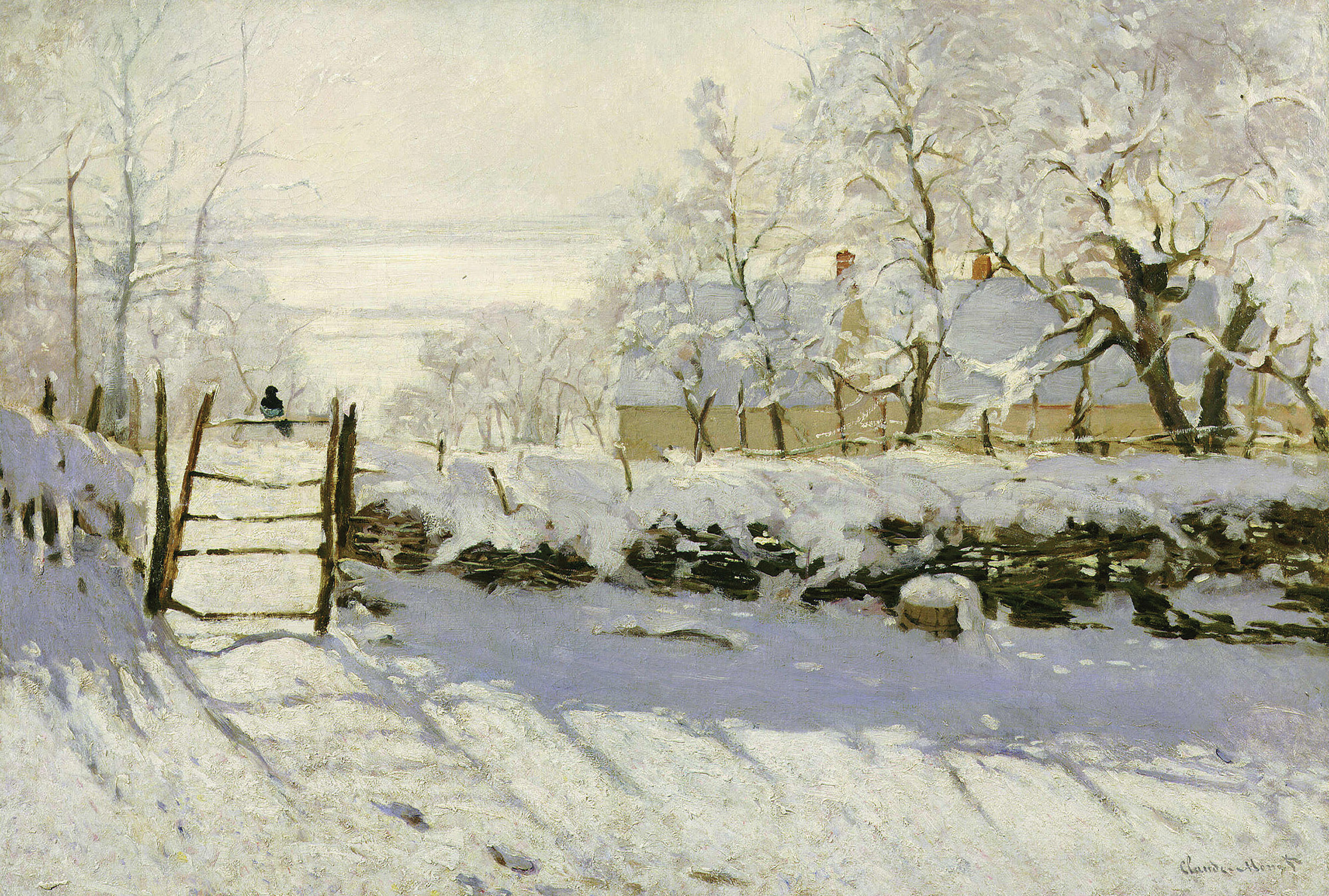 WINTER. IN THE FROZEN NORTH, a casual glance takes in vast swaths of unrelenting white, yet a closer look reveals prisms of pinks, blues, lavenders and grays scattered across the landscape by refracted light. Moving south, winter brings a spare palette of leafless trees, slate-colored branches piercing the sky, frozen waterways and an unexpected abundance of wildlife. But in these climes covered with ice and snow, a rare breed of artist can’t wait to be outdoors, to take on the challenge of painting winter’s hush and nature’s spiritual beauty.

Winter has always attracted the hardiest of outdoor painters. In the 19th century, many masters demonstrated the rich visual and emotional potential of the season. Claude Monet is said to have painted more than 100 winter scenes, with The Magpie (1868–69) among his most haunting.

In this painting, his choice of blue for shadows falling on fresh snow became a signature of the Impressionistic landscape — to use color to depict nature’s changing condition of light and shadow. Monet broke the rules, painting a scene rich with perception, as opposed to description. Today, the painting is privately held in the Musée d’Orsay in Paris, France.

Additionally, Camille Pissarro’s The Road to Versailles at Louveciennes (1869); Childe Hassam’s Boston Common at Twilight (1885 – 86); Vincent van Gogh’s Landscape with Snow (1888); and the stark, poignant watercolors from the 1960s by Andrew Wyeth — The Granary (1961) and Ice Pool (1969) — are but a few exceptional examples of the inspiration that winter has ignited through the ages.

As Wyeth described his fascination with the season: “I prefer winter and fall, when you feel the bone structure of the landscape. Something waits beneath it, the whole story doesn’t show.”

A Western Perspective: Being Prepared

Six Western artists who relish the challenge of painting outdoors in winter — Marc Hanson, Stephen C. Datz, Kim Lordier, John Potter, Dinah Worman and John Taft — shared the highs and lows of their experiences and some of the remarkable results from their adventures.

Those who paint outdoors in winter’s hazardous conditions take preparation seriously. All of these artists understand the importance of staying aware of changing conditions; they dress in layers and some rely on advanced technology designed for hunters and outdoor sports. From boots to gloves to head gear, they carry with them protection from ice, snow and driving winds. Marc Hanson’s favorite solution for insulating his feet from creeping cold are a double stack of interlocking rubber mats available at big-box hardware stores.

Making sure your vehicle is able to handle the terrain is also crucial. John Potter, who lives in a part of Montana where it has been known to snow on the Fourth of July, keeps four sets of chains in the car for occasions when he’s “had to chain up all around to get out of places I’ve been silly enough to wander into.” He also carries high-energy food and drinks with him, fire-starting items, a hatchet and sometimes even a space blanket. And, important to Potter, he tries not to run out of hot coffee and chocolate chip cookies.

Sometimes being aware of the weather means knowing when it’s time to throw the easel back in the truck and head for home. During those times, these artists often make quick pencil sketches, record the advancing light with a camera, or knock out a field study in anticipation of studio painting on another day.

Artists who undertake the challenges of painting on location in dramatic, intense and rapidly changing weather are a special breed. They bring visions of scenes we might otherwise never see. They share their delight in the majesty of the natural world and the creatures who roam it. They portray their simple pleasure found in the season, and their paintings contribute to a deeper appreciation of all that nature bestows.

What gets them outside in rugged conditions when most of us are cuddled up on the sofa in front of a roaring fire, sipping hot chocolate and appreciating the snowy view through a window? What motivates them? Their responses tell the story.

Marc Hanson has wrangled winters from Minnesota to Colorado’s Rocky Mountains and never lets weather stand in his way. In fact, “the silence of a fresh snowfall or even the snow falling itself” draws him out. “I think the biggest reason I enjoy winter painting,” he says, “is because the snow that blankets the landscape breaks it into shapes that are so different than we see in other seasons. Beautiful shadow colors are reflected from the sky, the surroundings, the light of day — big shapes are simplified. As the sun sets, the snow picks up its rich colors and the shadows amplify the cool reflection of the sky. I like that a lot.”

Winter conditions in Minnesota can be harsh — you learn not to wander off road, where you might get stuck, and you avoid standing on river ice just because the view inspires. In Colorado, Hanson challenges himself to month-long painting marathons from time to time, creating four paintings a day outdoors, every day — even in February when for half the month temperatures hover near zero and lower; then the more than 50-mile-per-hour winds set in.

His winter survival training as a Boy Scout in Norway means he always approaches it “with the utmost respect and caution.”

On July 22, 2017, Hanson will exhibit works capturing the magnificence of the natural environment alongside artist Frank Gardner at Addison Art Gallery in Orleans, Massachusetts.

Colorado artist John Taft paints outdoors two to three times a month during the winter, including a couple of overnight trips. Silverthorne, Steamboat Springs and Rocky Mountain National Park are some of his favorite locations in Colorado.

“It’s always a joyful spiritual experience,” he says. “Snow can be marvelous. The white blanket and exposed ‘bones’ of winter provide a unique experience — from fresh first snow falls, heavy midwinter accumulations and melting remnants of receding snow, snow on anything can be magical.”

Kim Lordier lives in the San Francisco Bay area. The Sierra Mountains are only four hours away and the coast no more than 15 minutes.

“I love, love painting snow,” she enthuses. “I love when the ground plane is lighter in value than the sky. I’m particularly interested in the bounced and reflected light, the amazing colors found in the crystalline water ice, the dark pines and the dead wood’s subtle counterbalance to all the color and light.”

Montana offers some of the most spectacular winter scenery and opportunities for wildlife sightings in the western United States, and John Potter enthusiastically takes advantage of them. “I love the whole Yellowstone region, sometimes snowshoeing in to my favorite places here in south-central Montana and northern Wyoming and along the Yellowstone River.”

Potter’s wildlife paintings are remarkably observant and he has experienced some of his happiest and “most humbling” moments outdoors being surrounded by animals or birds while working. Birds have landed on his easel and deer have stood within a few yards of him as he painted. He believes wild things are drawn to the creative process. “I once turned around after working diligently for almost an hour to find a group of elk bedded down not 50 yards behind me!” he says.

Potter will exhibit new work at the Southeastern Wildlife Exposition February 17 and 18 in Charleston, South Carolina.

Clear days with new snow are the siren’s call for Dinah Worman. Based in Taos, New Mexico, she typically loads ski pants and waterproof boots in her van along with her art supplies and makes sure she has a full tank of gas. Because her vehicle has its limits, she avoids remote areas with deep snow.
She frequently takes photos for reference and sketches scenes with copious notes, paying attention to composition and contrast. For Worman, “a photo, a sketch and a fresh memory are ideal.”

Her favorite winter sites include Colorado, Oklahoma and areas around Taos. “Views from country roads started my current interest in snow scenes,” she says. “Snow is the great simplifier and streamlining the landscape allows the buildings along a high horizon to stand out. Open areas, roads and hills stacking up from the road create compositions I continue to seek out.”

Worman has been selected as the 2017 featured artist for the Coors show, and several of her paintings will depict winter in her well-honed signature style.

Out on the western slope of the Rockies, Stephen C. Datz roams far and wide in winter, searching for “an endlessly changing smorgasbord of interesting light and weather effects.” He frequently makes the rounds of the Colorado National Monument, Glade Park and the regions around Ridgway, Ouray and Telluride, Colorado.

While painting on New Year’s Day in Crested Butte a few years back, it got down to minus 25 degrees overnight, but he was determined to get out early.
“When I got to my location,” he relates, “I noticed the air was ‘sparkling.’ I had never seen anything like that before or since. There were tiny ice crystals suspended in the air and they twinkled in the early morning sun.” For Datz, just being outside in the winter is a “joyous and spiritual experience.” 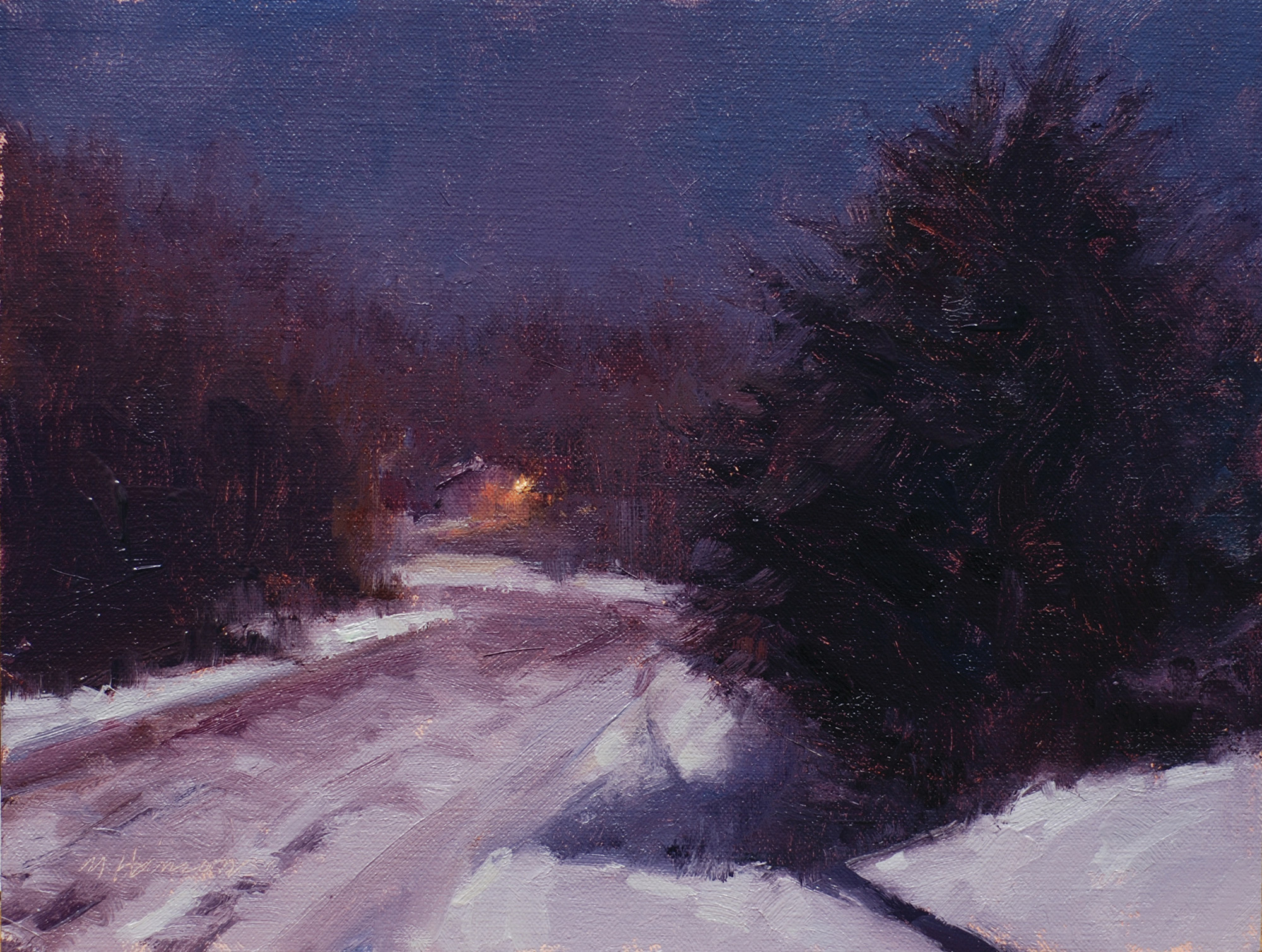 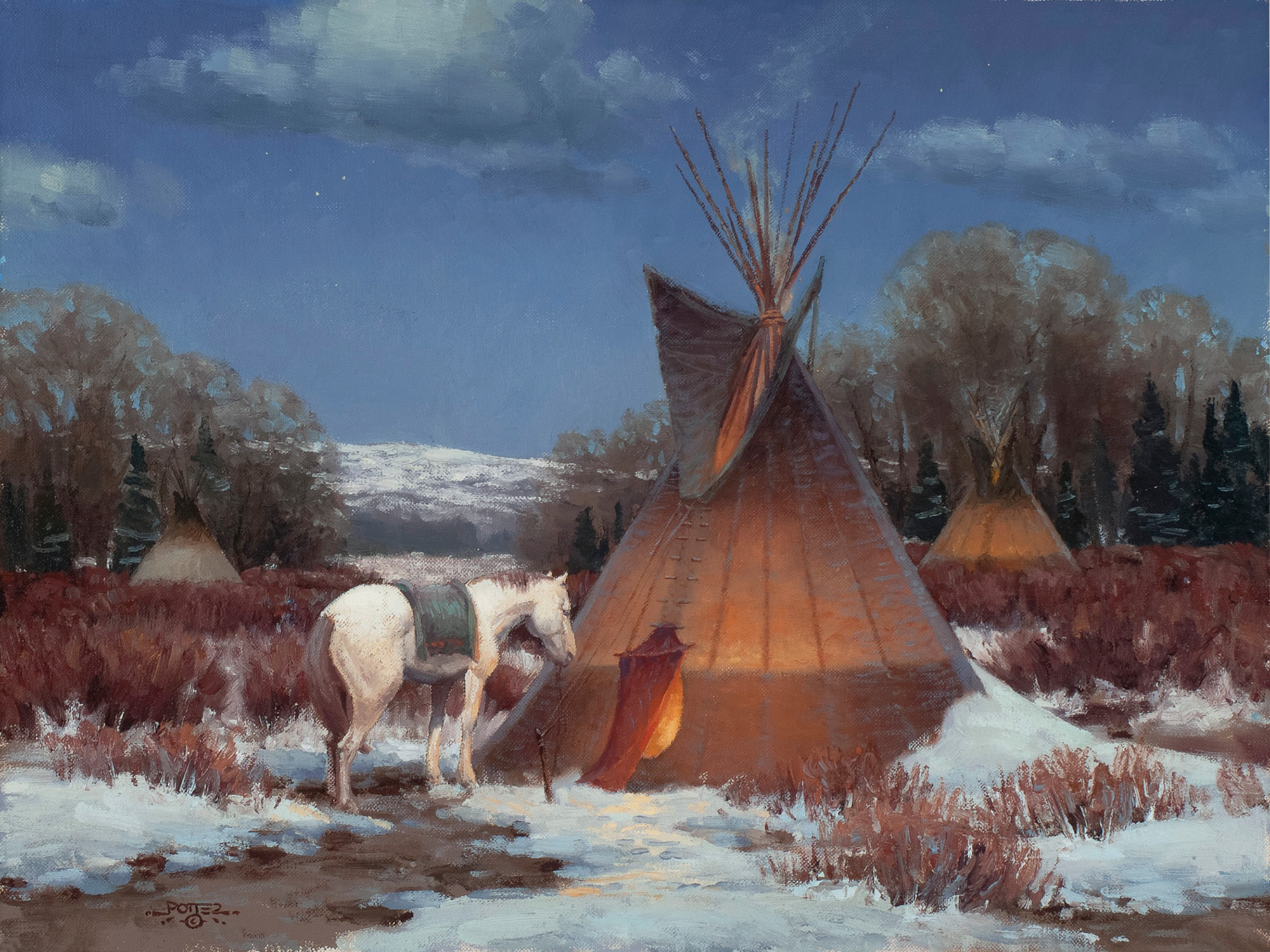 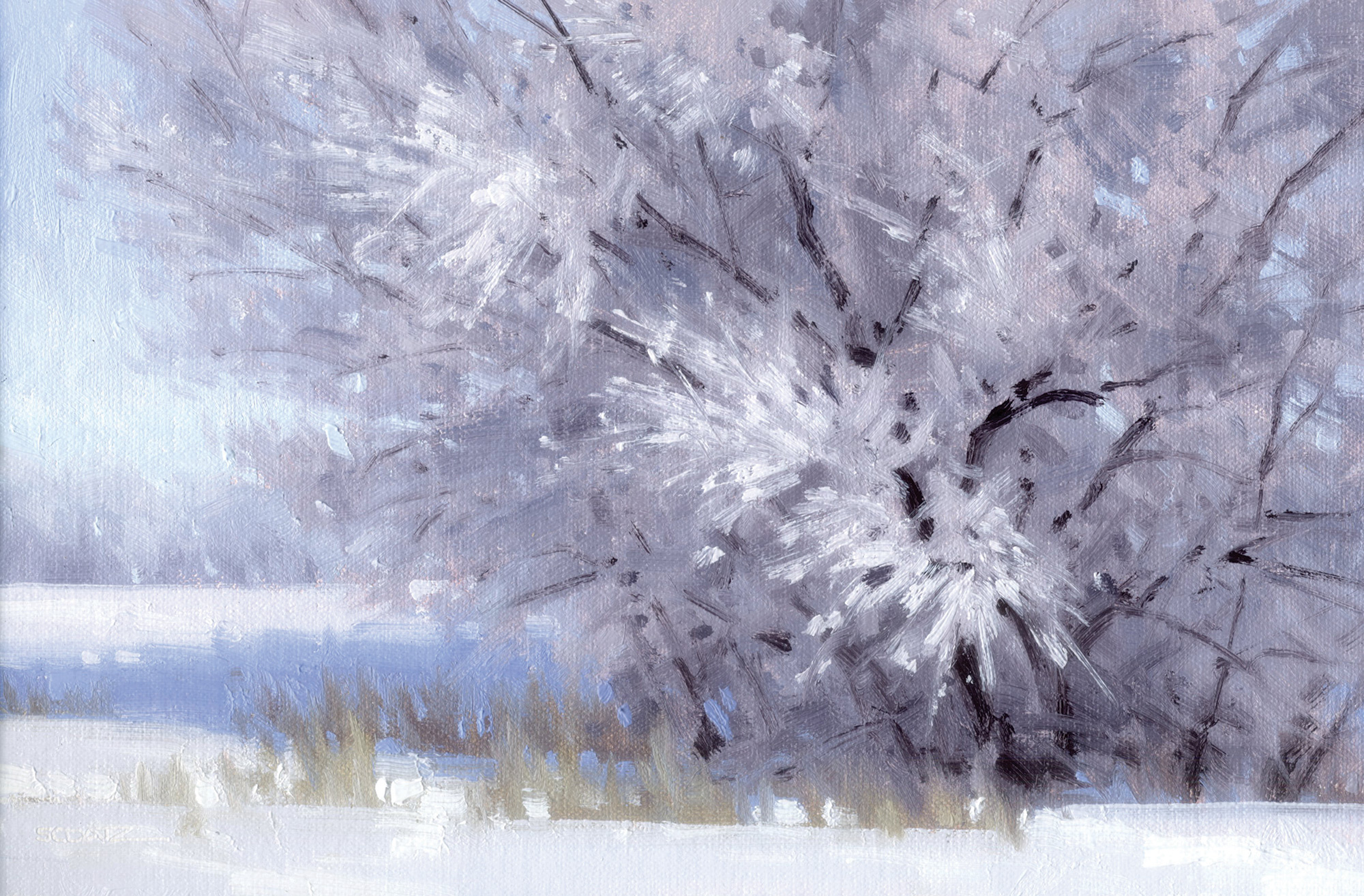 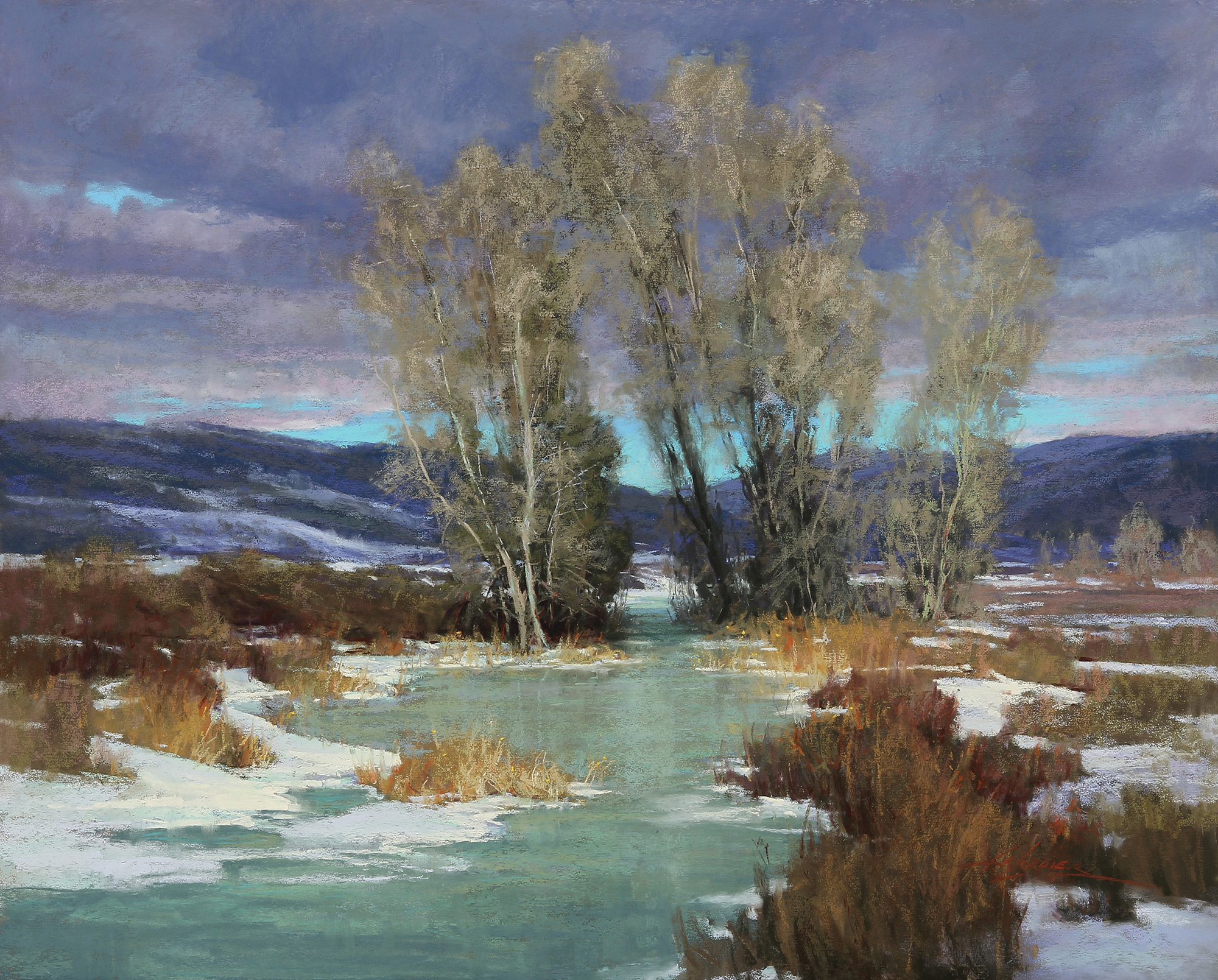 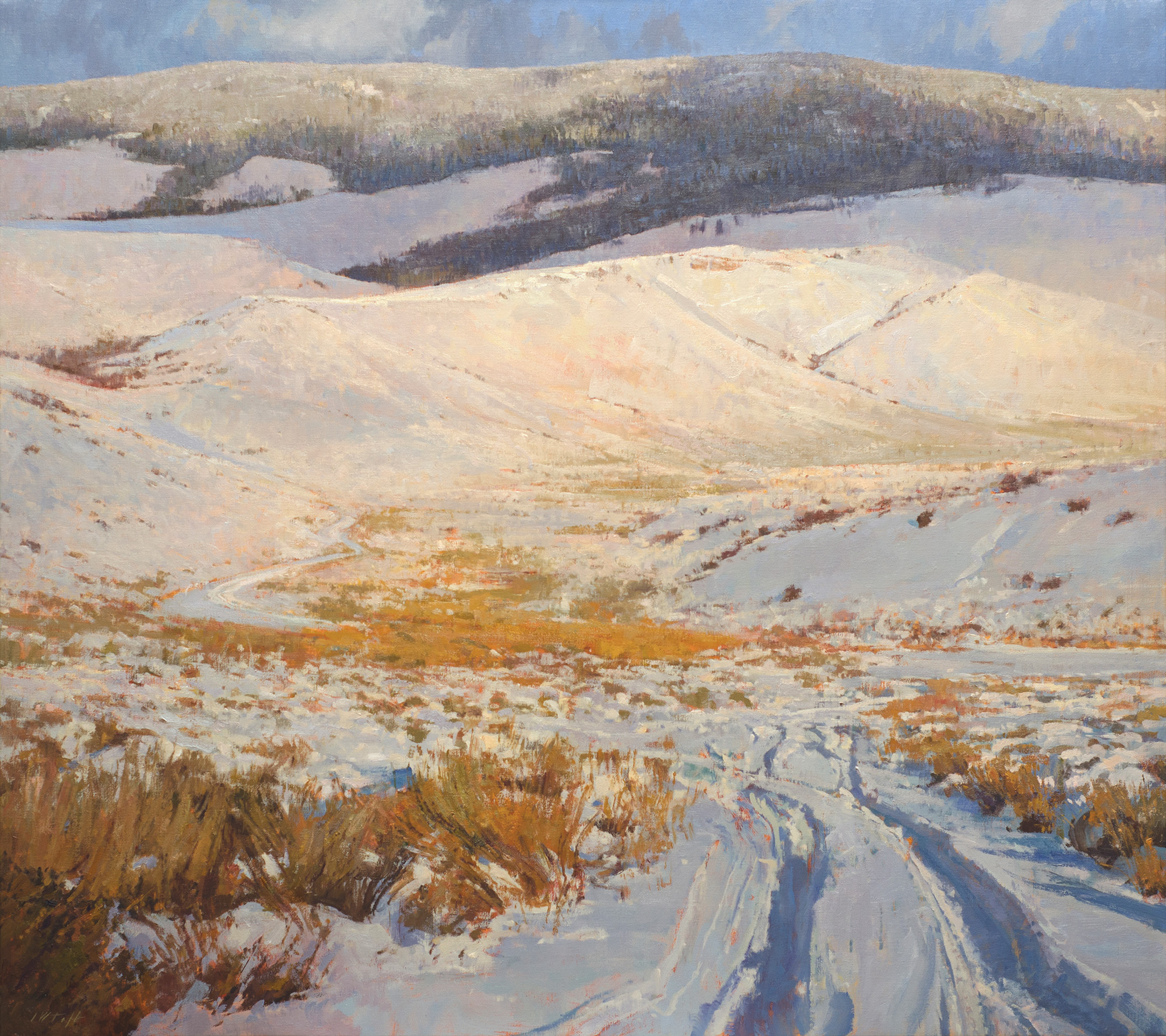 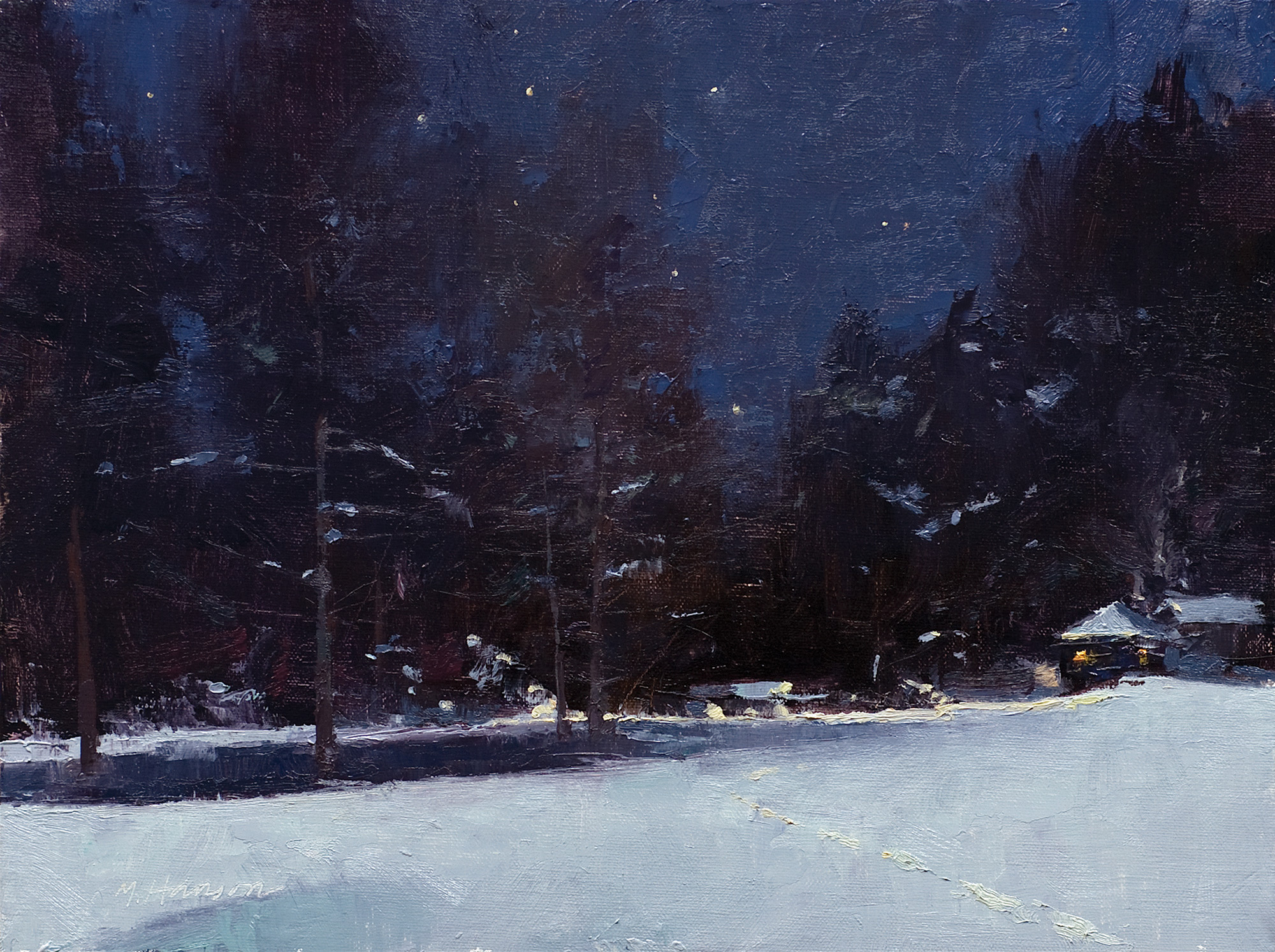 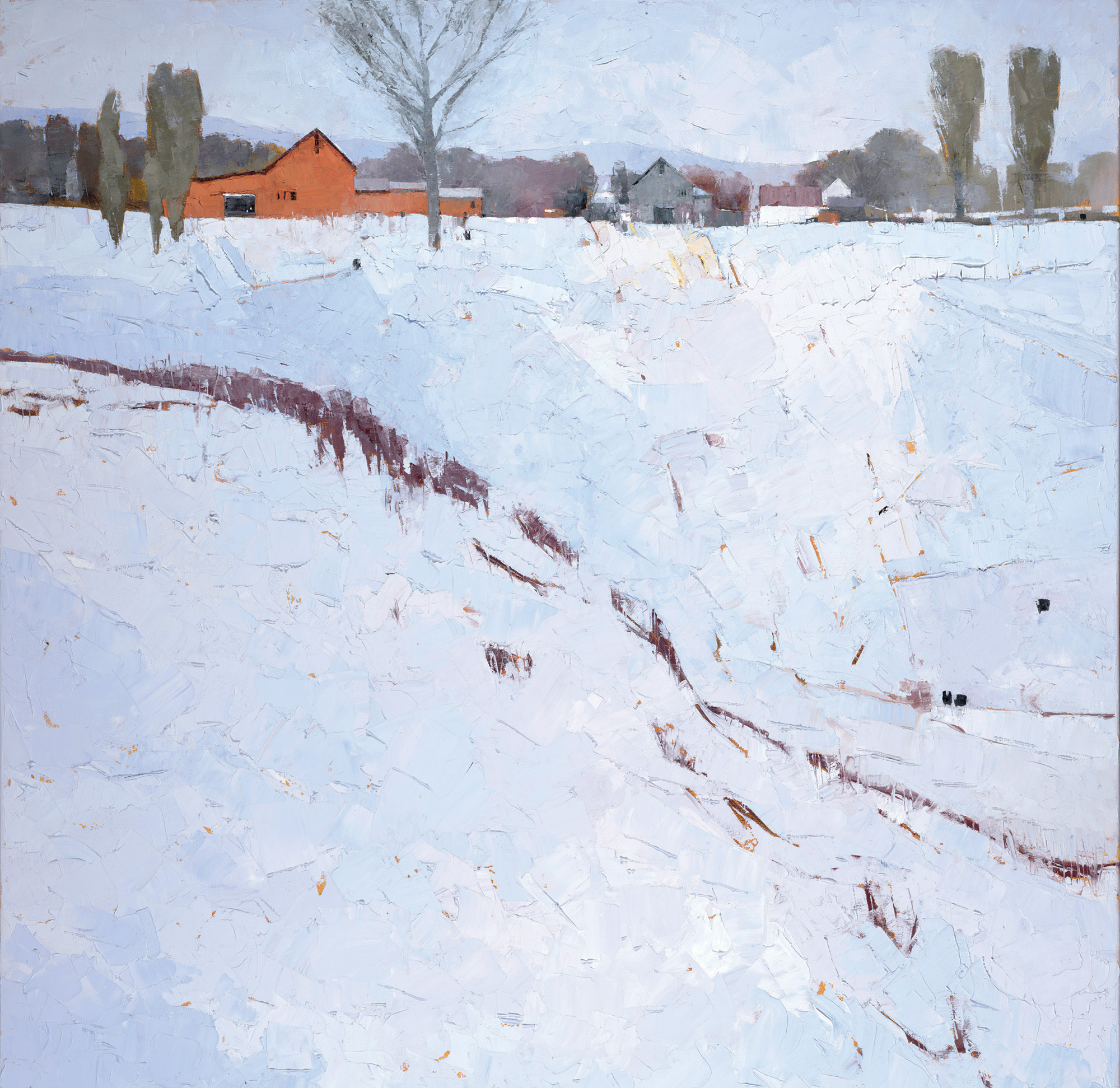 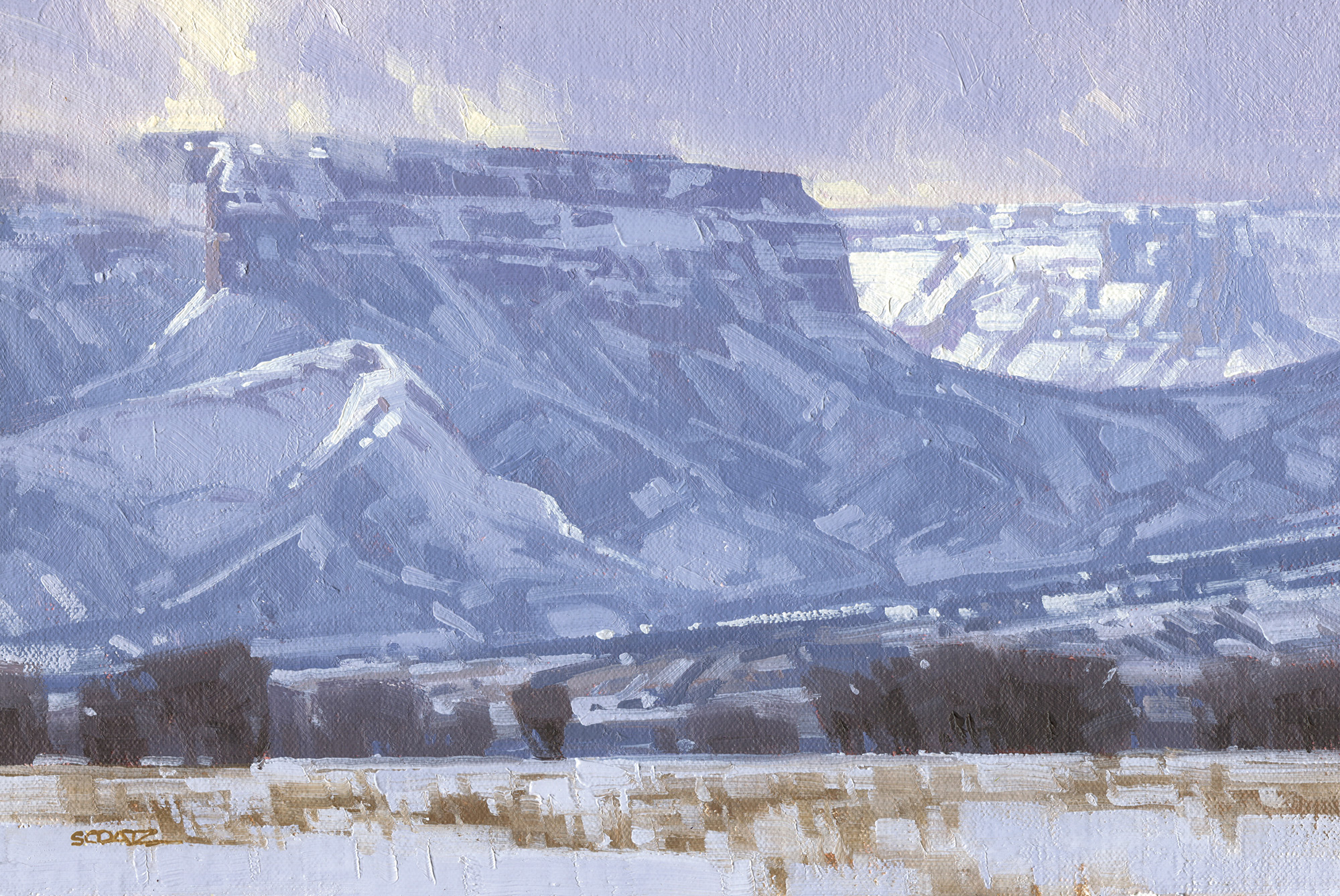 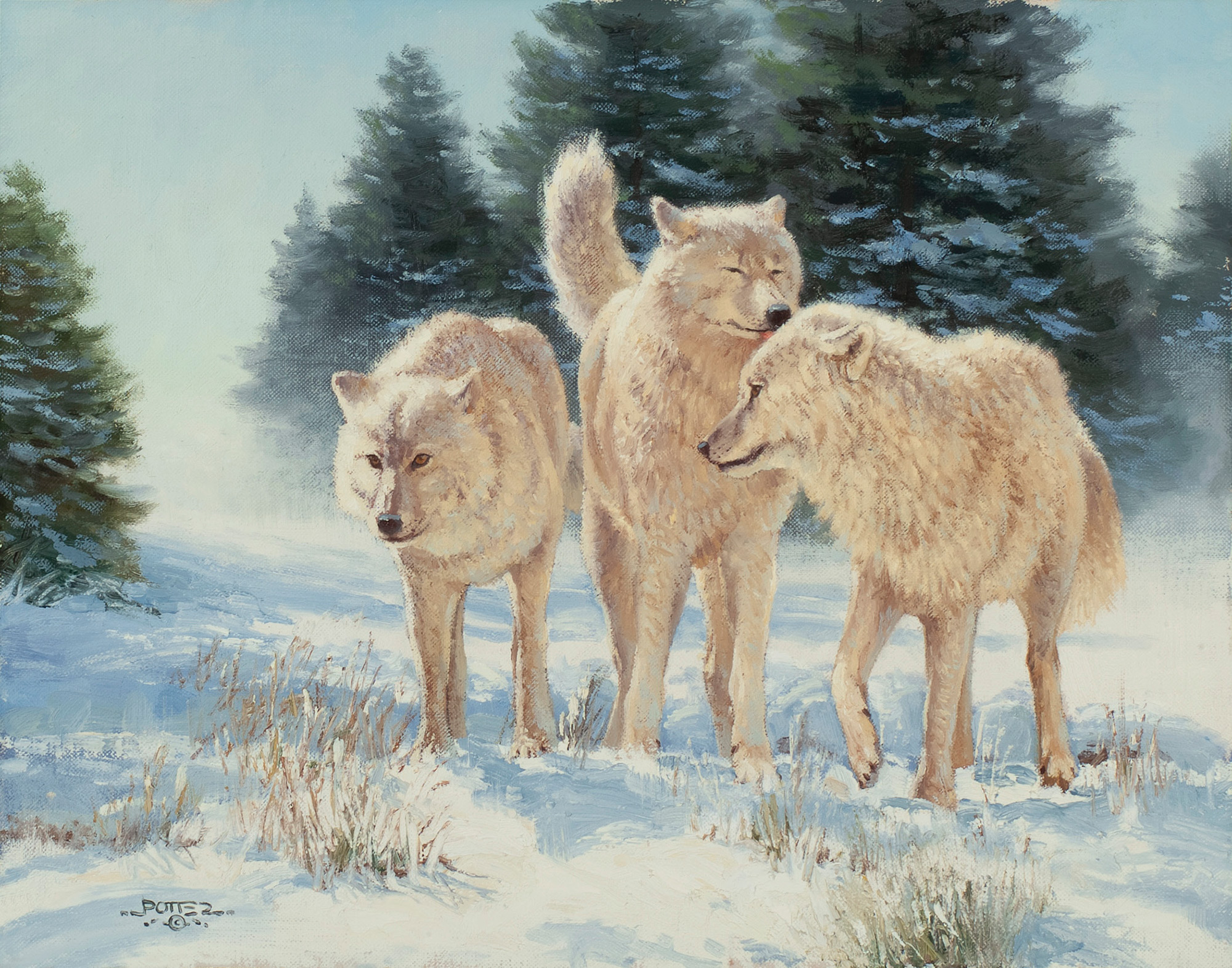 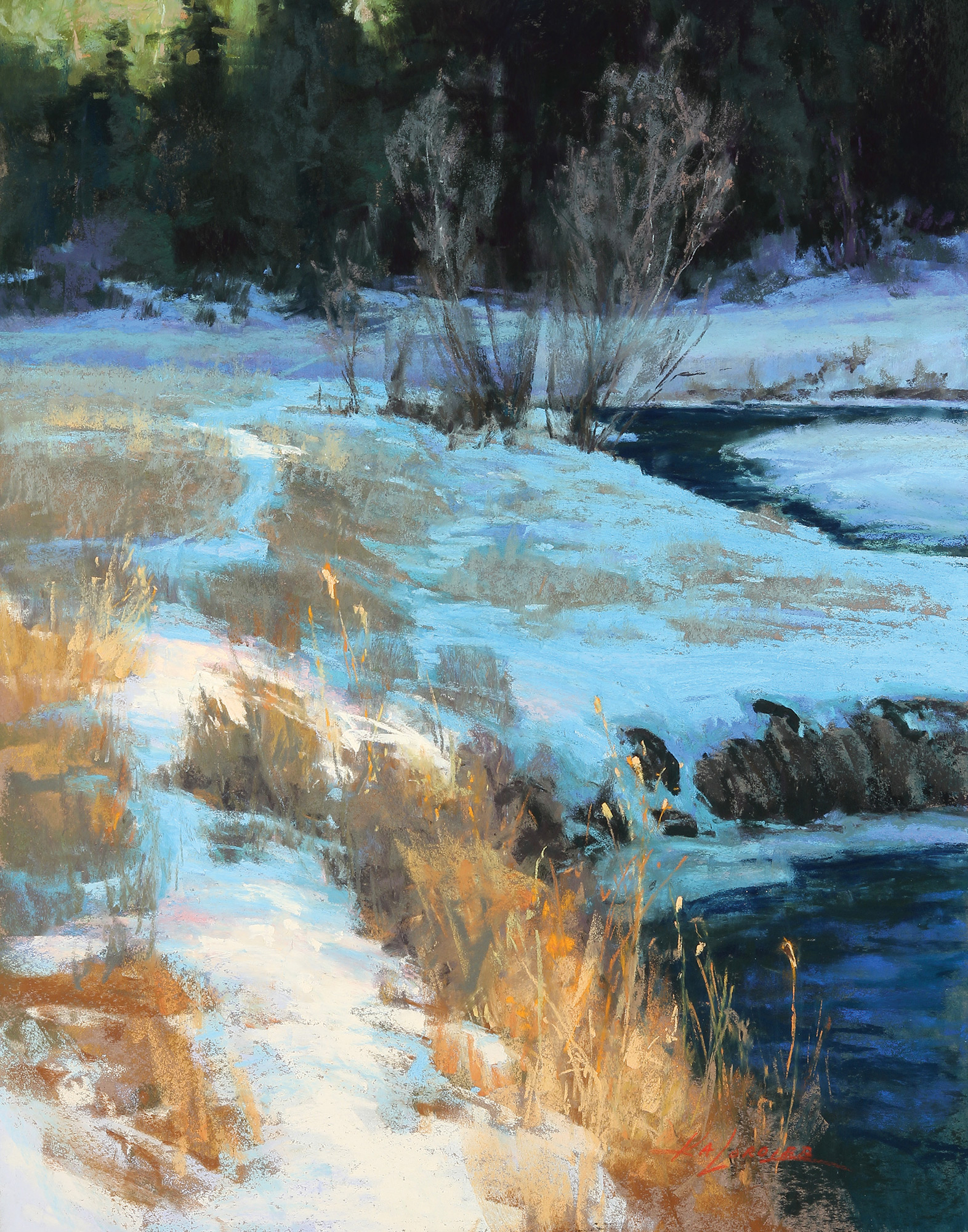 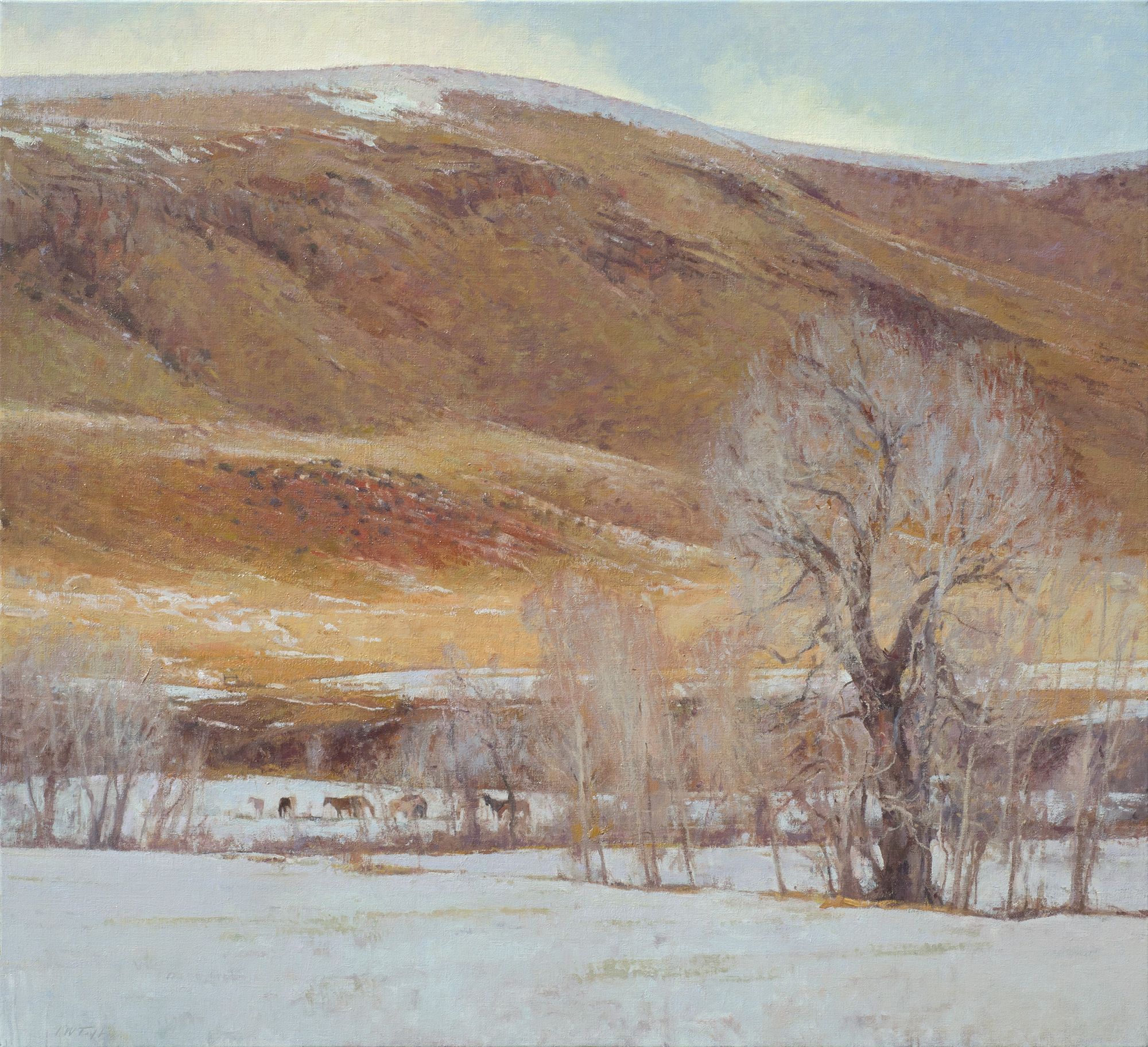 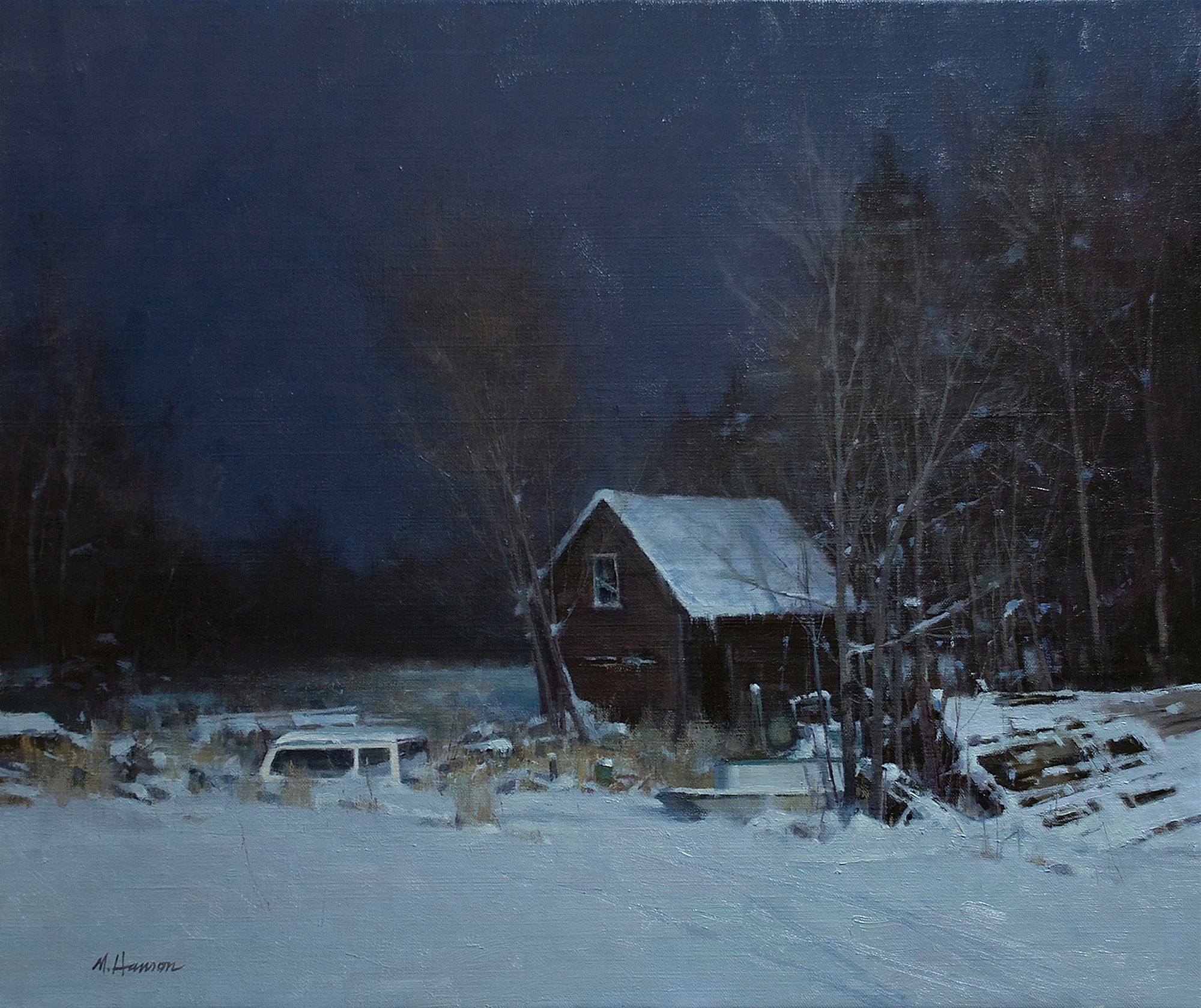 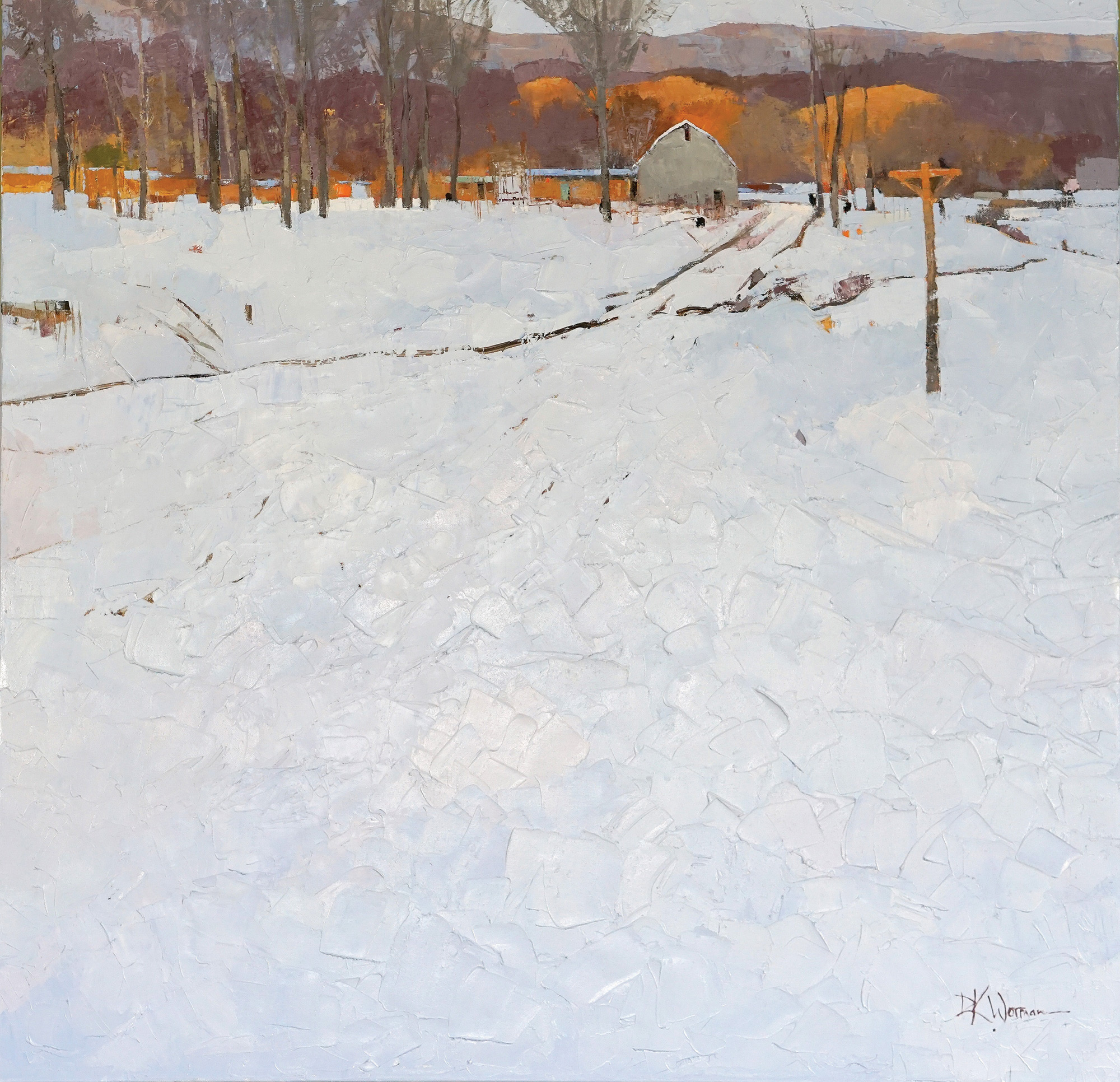