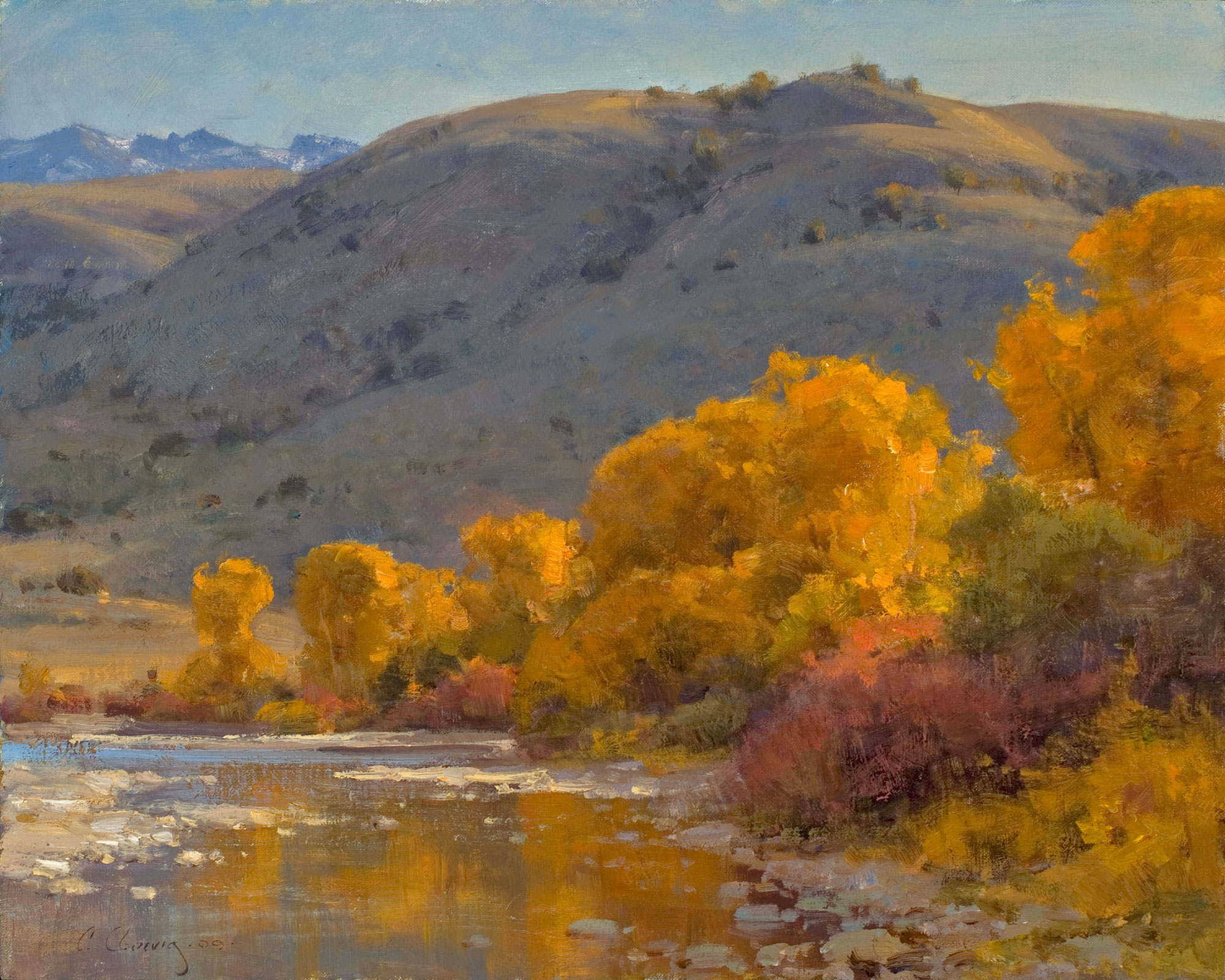 IT CAN'T BE AN EASY THING, PAINTING LANDSCAPES IN THE WEST. Walk out the door, the subject matter’s already punching you in the nose. We know certain mountains as well as we know our own driveways. If you’re an artist, if your job is to bring something new to the familiar, to invest all these same old vistas with some measure of personal light and vision … where do you even start? Most landscapists, let it be said, too often reproduce what’s been done before, not so much standing on the shoulders of their predecessors as peering around them. Start with Bierstadt, throw in a little Maynard Dixon and Rungius, spice it up with a soupçon of Seltzer or Sharp, and … bingo. Instant West.

In this context, Clyde Aspevig, one of the finest and most collectible painters in America, is a rare creature indeed: An artist capable of taking the familiar landscapes of the West and making them his own, not so much appropriating any given view as recreating it, informing all the same old aspens and cliffs, rivers and lakes, with a very specific and well-considered sensibility. To view one of his massive landscapes — the canvases are often as much as 5 or 6 feet wide — is to catch a glimpse of the world through Aspevig’s eyes, to watch the work of an artist who thinks.

On a warm spring day, I stood with Aspevig on the banks of the Shields River in southern Montana, his house and studio behind us. The river was high and brown, close to flood. Further downstream, a cutbank trickled down a slow but steady run of gravel. “Looks like you’re losing some property there,” I said.

“Yeah, well. But I’m gaining it on the other side. Wherever there’s erosion, there’s deposition somewhere else.” He grew up on Montana’s Hi-Line, and it shows in his accent. A little bit of Canada, a little inherited Norwegian. “Flooding’s not a threat, it’s just rejuvenation. It lays down silt for the next generation of plants.”

For the next six hours, during a social evening spent with Clyde and his wife, the highly regarded painter Carol Guzman, I kept chewing over his offhand comment about erosion and deposition. In some ways, this is Clyde in a nutshell. When looking at a river pushing flood stage, his first concern wasn’t for his property, his home, it was for nature, for the larger system. “I like to try to understand the process of rejuvenation,” he said, “the oxbows, the ebb and flow.”

Aspevig was born in Rudyard, Montana. A small collection of grain elevators, churches, and bars on the western edge of the great plains. Carol said, “There’s a sign when you come into town, ‘499 good people and one old sore head.’ Well, when Clyde was the visiting artist at the CMR show in Great Falls, when he came up for that show, they gave him the key to the city of Rudyard. Changed the sign for a few days to read, ‘499 good people and one great artist.’”

It’s tempting, in talking about Aspevig’s work, to emphasize humble beginnings, the irony of such a respected and urbane artist coming from the rural heartland. But in fact you could argue that growing up in rural Montana was essential for Clyde’s development as an artist, for his preoccupations with light, with space. In a town like Rudyard, there is precious little of anything else except for light, for space.

He knew, even as an art student in Billings, the direction he wanted to take with his work. “I was one of the few students who wanted to paint representationally. This was in the late ’60s and early ’70s, when Abstract as a school was at its heyday. My mentor, Ben Steele — wonderful man, one of the last surviving members of the Bataan Death March — he understood what I was trying to accomplish. I remember a time when all the students were asked to get up in front of the teachers and explain their work. And there was all this talk about symbolism and allegory, and I had a little watercolor of some hay bales, and I said, ‘This looks like some hay bales in a field, but actually it’s an orgy.’ ” And people lit up. You could see them thinking, ‘Aspevig’s coming around.’ But there in the back, Professor Steele was shaking his head. He knew I was just screwing with them.”

In the 35 or so years since Clyde Aspevig graduated from college, he has steadfastly pursued his own vision, ignoring the changeable, often-whimsical fashions of the art community in favor of painting the world as he sees it. Working now at the height of his career, Clyde has had more than 20 one-man shows at a variety of venues across the country, including the Trailside Galleries in Scottsdale and Jackson Hole, The National Arts Club in New York, the Gilcrease Museum in Oklahoma and the Rockwell Museum in New York. (He’s currently working on a show for the Santa Barbara Historical Museum, opening at the end of October, 2010.) For the last two years he’s been a presence at Christie’s American Painting Auction in New York, one of only two living painters to be represented in that distinguished event.

To hear Clyde discuss any given painting is to hear the distillation of a very personal philosophy. He has a background in classical music (his studio, amid the canvases, coffee table books and shelves of plein air field studies, has, as its pivot point, a baby grand piano) and tends to talk about his work using musical analogies. “I like to emphasize the quality of light. It’s symbolic of life. That’s why I paint it representationally. I enjoy the light. I try to infuse it with ideas of syncopation, rhythm, interconnectedness. Music is hardwired into us, we feel certain rhythms. And painting should reflect that.”

Like every accomplished artist, Aspevig places a part of himself into every piece he does. He directs you around the shapes and forms, points you toward a certain juxtaposition of colors, asks you to linger here and hurry there. As I stood in front of an unfinished study of the Tetons, for instance, I noticed that the mountains were, improbably, a secondary element. In the foreground, an arrangement of aspens led the eye into the painting; an intermediate valley asked you to pause on its strong horizontals; then the eye jumped dismissively past the gray mountains toward a more complicated sky. Rather than asking you to consider the cracked canines of the Tetons — a subject that has already been painted 10,000 times too many — Aspevig’s painting was more about color and movement than it was scenery. Clyde said, “How you arrange your painting is a form of composing. It’s similar to music. All parts have a connection to each other. It’s symbolic of the earth itself, that kind of interconnectedness. There’s a universality there that I try to celebrate in my paintings.”

Clyde and Carol live surrounded by art. After dinner, I asked to see some of their other paintings. In the dining room, the most prominent pieces are landscapes by the Danish-American painter Emil Carlsen. “In terms of his abilities to get to the idea behind the aesthetic,” Clyde said, “few people exceed Carlsen. He was so sophisticated. Knew what to leave in and more importantly knew what to leave out.” Aspevig pointed to a study of trees. “He had an ability to layer paint, to scumble and glaze. It transcends simple painting.” Upstairs, and in addition to their Emil Carlsens, Clyde and Carol have pieces by the English watercolorist Ken Herrard, by Nicolai Fechin, Paul Bartlette, George Carlson and Edgar Payne.

Aspevig’s own landscapes are composed and finished in his studio, but typically begin outdoors, Clyde standing before an easel, working plein air. “I try to carry on the old tradition of plein air painting,” he said. “I develop my larger paintings from these smaller pieces. And memory. These days, it seems like most of my paintings are memory and invention.” By which he means that he finally feels little obligation to conform to the actual shape of the landscape. He doesn’t hesitate to move a mountain a few inches to the left or right if it suits his vision. “The hardest part of painting is in concentrating on masses rather than detail. You focus too much on detail, you lose the effect of the masses, the relationship of things.”

Clyde often travels on behalf of his paintings, exploring not only his beloved Rocky Mountain West but other parts of the world as well. And while he resists the notion of being called a regional artist — “I’m an American painter, not a Western painter” — it’s true that the majority of his pieces tend to focus on the West. “The Wind River Range, the Winds, those are some of my most popular paintings, those high country lakes, and I’ve often wondered why they’re so popular. I’ve come to see a parallel in the Victorians, when they started collecting paintings from exotic places, Turkey, Africa. I think these paintings, the Winds, constitute a form of the exotic. Most people don’t get to experience these special places. The average person, they might see these high altitude lakes nine or 10 times in a lifetime, if they’re lucky. Some of my paintings then become a way to experience the exotic.”

At the end of the evening, drinking coffee around his firepit, we were both looking west toward the last of the sunlight, toward the distant horizon of the Bridger Mountains, the dark blue of a prairie landscape bifurcated by the Shields River. I said, “For a student of light, this is a great place to live.”

“Yeah, I mean, look at it. That band of water, the river reflects the sky, and unites it all. If the water were absent, it wouldn’t work.”

And while it may be true that there are aspects of Aspevig’s work that speak to our sense of the exotic, to our curiosity for unusual places, I would argue that his appeal is finally larger than that. He is an artist, above all, who is devoted to the world at large, to the environment. He loves his mountains, his streams, his rivers, and he somehow manages to place that love into every brush stroke, every angle of light and dab of shadow. We live in a world of car alarms and revving engines, of air conditioners and computers, but to stand before Aspevig’s best work is to share, however briefly, in an artist’s feeling for wind and wood and leaves. If we pay attention, it’s to learn how to love the world again. 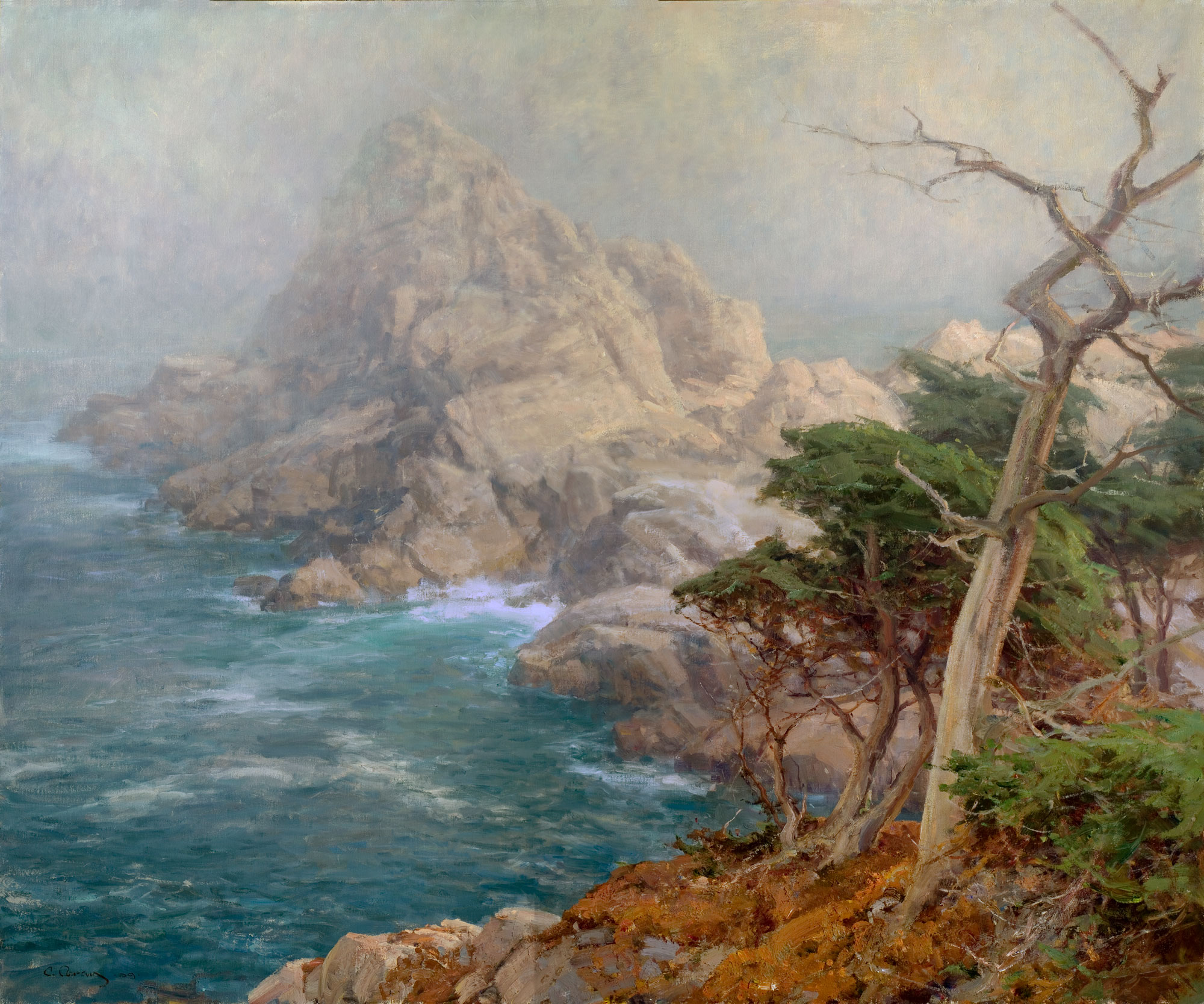 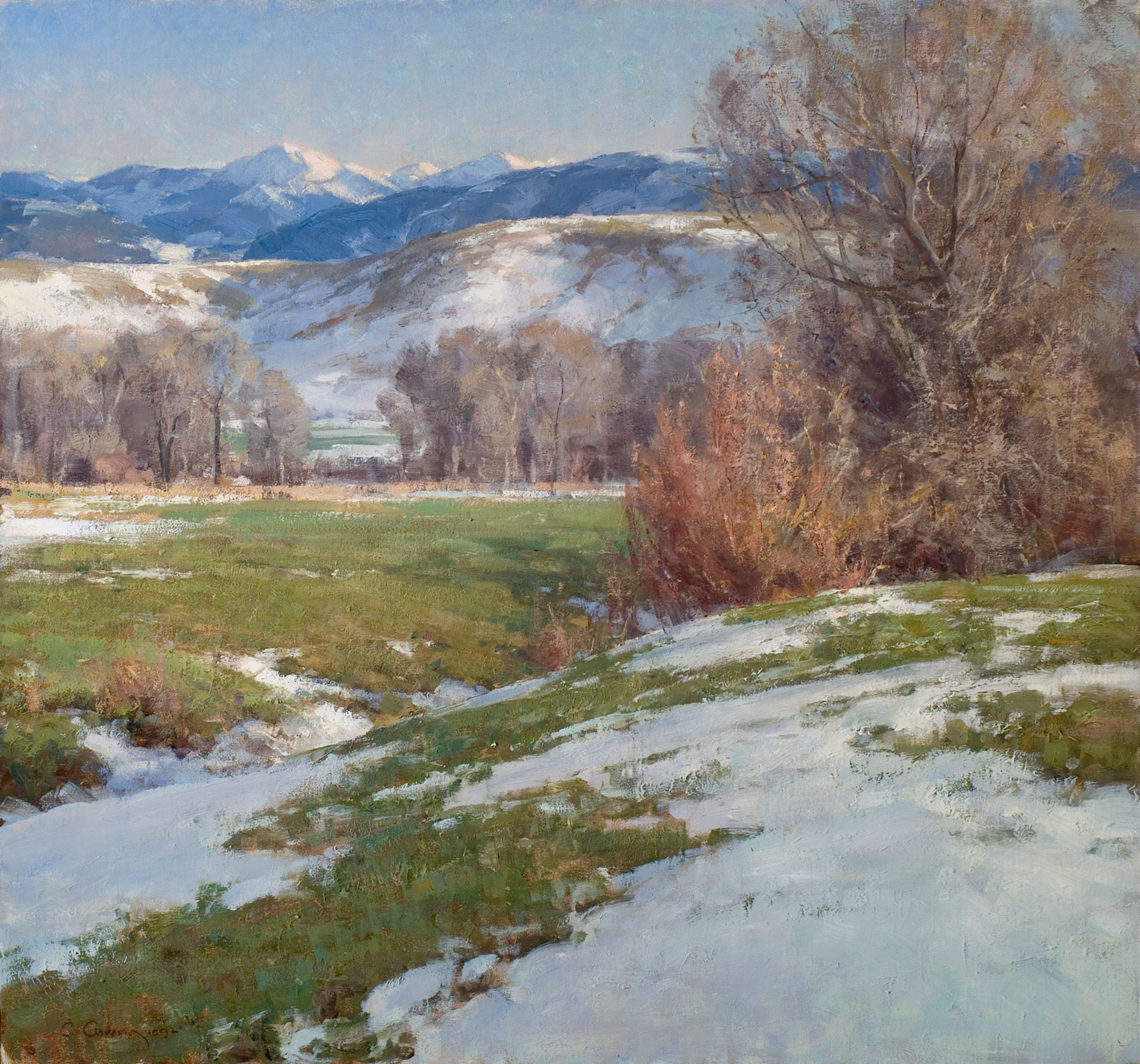 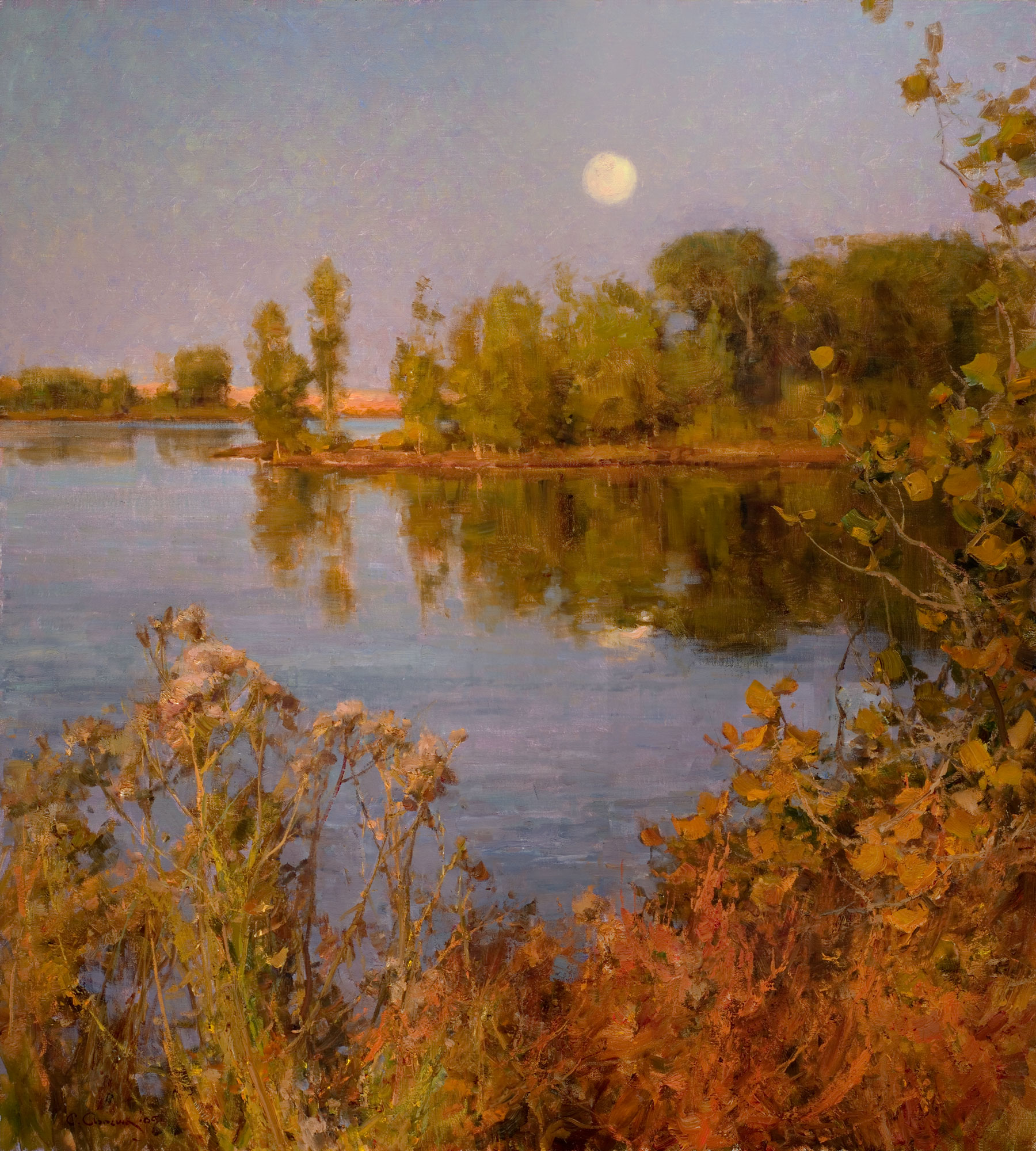