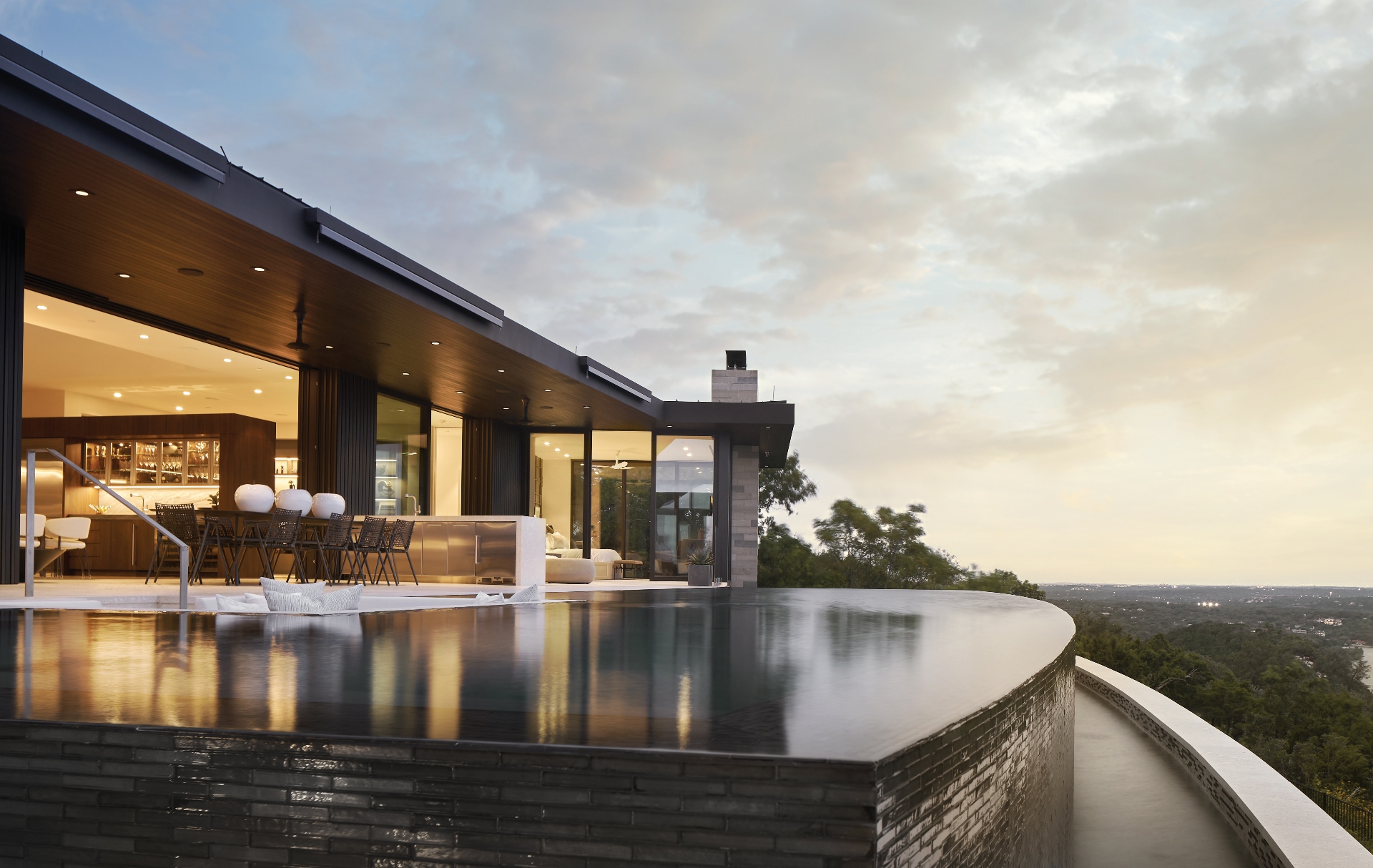 In true Mid-century Modern style, the home’s simple lines, walls of glass, and sparse, open floor plan integrate the inside with the out, and provide panoramic views of Lake Austin and the city lights below.

Austin, Texas: Home to fabulous food, live music, a booming tech industry, and a general quirkiness that supersedes its official role as the state capital. Some call it the blue dot in a red state. Others suggest it’s a melting pot of authenticity — cultural, historical, and otherwise. Most agree that it’s the inclusive nature of a continuously evolving creative community that draws people from across the country to dream big in its quickly rising tide. 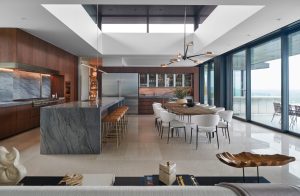 The kitchen, designed by the owners to be a fully functional, welcoming, and sophisticated space, is where cooking and entertaining, both indoors and out, are a seamless expression of their lifestyle. It features Palladium quartzite countertops paired with custom walnut and stainless steel cabinets. Surprise details abound, including a sliding backsplash behind the cooktop, which opens up to additional storage.

Austin’s architecture, too, is as diverse as its people and culture. The city’s love affair with Modernism traces back to the mid-20th century. Designers affiliated with the University of Texas’ prestigious architecture program, including Roland Roessner, Barton Riley, J. Eugene McKee, and A.D. Stenger, promulgated the style and were credited with introducing daring designs that were both cool and timeless. In the 21st century, architects continue to embrace this legacy, their work a tableau of clean lines and contemporary details set against the rolling topography of the native Texas landscape. 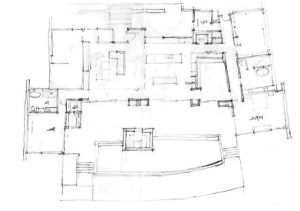 This conceptual sketch by Dick Clark convinced the owners they had found the right architecture firm to design their home.

The late Dick Clark III, FAIA, is credited with contributing to the vibrant architecture community in Austin. Under his leadership, Dick Clark + Associates injected new life into the restaurant and retail scene, and created a vast portfolio of modernist homes coveted for their seamless integration of indoor and outdoor space, use of native materials, and respect for the beauty of the surrounding landscape. 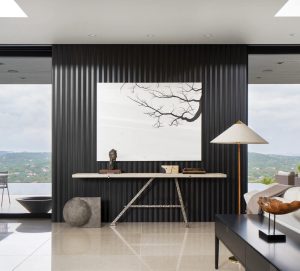 An original work by contemporary artist Cameron Martin hangs above a Gregorius | Pineo console. Custom wood paneling, found on the exterior, introduces texture between a wall of windows.

Clark’s general joie de vivre and astute design sensibility initially attracted clients John Mooney and Lon Weingart to interview his firm for a residence they wanted to build on one of Austin’s highest lots, overlooking Mount Bonnell. Their successful careers in major cities around the country — Weingart’s role as chief operating officer for jewelry start-up Kendra Scott catapulted the store from retail outlet to global success story — and a love of travel influenced the couple’s viewpoint on design and lifestyle. 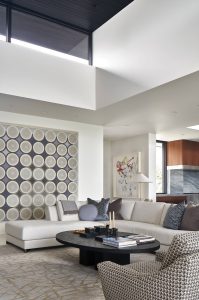 As Mooney recalls, before they hired Dick Clark + Associates, they met with senior associate Kim Power on the mountain-top site to review the existing home. Power’s enthusiasm for the project was so immediately palpable that Clark instantly got in his car and drove to the site, according to Mooney. “The next time we met with [Clark], he’d sketched out the central idea. When I reminded him that we hadn’t signed an agreement yet, he covered the sketch up with a book,” says Mooney. Needless to say, he adds, the architect’s rough scribble was exactly what he and Weingart had envisioned for their home. 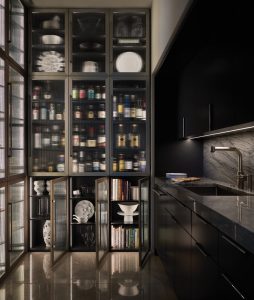 Riveted glass on the butler’s pantry adds texture to the kitchen.

Power, who became a partner at Dick Clark + Associates upon Clark’s death in 2017, describes the process as an exercise in quantitative and qualitative design. “John and Lon recognized our design team’s artistic vision and technical abilities, but their contribution was equally valuable,” says Power. For example, she adds, instead of presenting the firm with images and ideas they liked, they prepared a thorough spreadsheet that outlined, to the square foot, the size of each room. “They wanted a home where they could entertain, but it was also important for them to be able to eat dinner in front of the TV,” Power recalls. In other words, discloses Weingart, full amortization of the property was secondary to designing a house they wanted to live in forever. 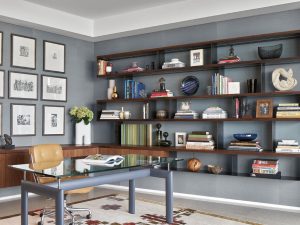 Behind the Cassina glass desk in the study hangs a series of prints, originally conceived as military recruitment art, by mid-century artist Paul Cadmus. Custom walnut and raw steel bookshelves, designed in the style of another mid-century French designer and architect, Charlotte Perriand, line one wall.

While the existing lot commanded one of the premier high points in Austin, Power’s team (aided by a fleet of drones) determined that raising the building envelope an additional 8 feet would fully maximize views in all directions. The subtleties in the landscaping and grading are a testament to the acuity of both the architects and landscape architects. On the entry side, the home is just visible above the street, and the additional grade makes all the difference. Suddenly, the Texas-sized horizon comes into view in all directions, while the borrowed landscape of the river valley and Austin’s skyline create an evolving and ever-present tapestry of color and light. 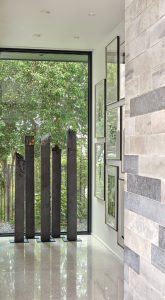 In true Austin style, there are some fairly impressive “wow-factors” embedded in the design of the 4,000-square-foot home, including an infinity-edge swimming pool that overlooks Lake Austin, a showpiece pantry complete with fluted glass and cabinet lighting, and 60 feet of wall-to-wall and floor-to-ceiling retractable windows. There are subtler touches that are equally impressive, such as the detail embedded in the mahogany siding, used selectively inside and out, to provide visual relief to the home’s limestone and marble finishes. The mix of innovation and creativity truly characterizes Austin’s design community, says Power. “It’s an exciting place to be an architect.”

The front door, discreetly concealed in the wood siding and tucked to the side of the home’s front facade, opens to an original Leigh Anne Lester painting from the owners’ robust art collection. It’s a pause with a purpose, requiring visitors to rest their eyes on the work’s vibrant tendrils before turning toward an open living and dining area, a visually cohesive one-story space accented by indirect light emanating from clerestory windows in the central ceiling pop-up. The subtle hues of limestone and marble, used on the walls and floors both indoors and out, blend imperceptibly with the long and linear pool and deck. Beyond the pool, the property drops abruptly to a forest of native oak and the river below. 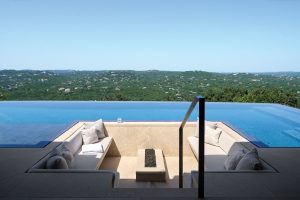 The infinity-edge pool, designed by Austin landscape architecture firm Design Ecology, includes a recessed seating area and firepit that sits flush with the surface of the water.

Show-stopping views and intriguing architectural details aside, there’s an equally important story embedded in the design of the home: the integration of an unparalleled collection of modernist and contemporary art. Weingart explains that it was an interest that began with the purchase of a painting by Santa Fe artist Forrest Moses more than 20 years ago from the Tobin Foundation after the death of benefactor Robert Tobin. A philanthropist with deep ties to San Antonio, Tobin launched Opera San Antonio, a program that Weingart’s father, an opera singer himself, chaired for many years. When the foundation opted to part with much of Tobin’s collection, the couple jumped at the opportunity to seed their budding interest with works by prominent artists from the modernist period.

The Moses landscape has been a cornerstone of the couple’s many homes; its prominence never wavered even as their collection — one that contains works by Sol LeWitt, Paul Cadmus, Jules Olitski, and Rockwell Kent, among others — evolves. “It has never been about the quantity of pieces for us,” says Weingart. “Instead, we have focused on the quality and the integration of the art with our home’s architecture and interior design.” 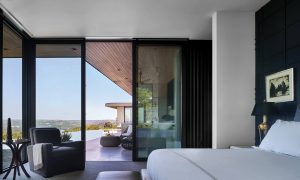 The homeowners’ bedroom, cantilevered above the backyard and turned for maximum views, opens to a private seating area on the pool deck. Equal parts traditional and contemporary, the upholstered bed and walnut and lacquer nightstands, both from New York City’s Dmitriy & Co., are paired with antique French Empire lamps. A print by San Antonio artist Mary Bonner hangs next to the bed.

For this home, the couple worked with interior designer Kate Blocker and Austin-based art consultant Amy Sawtelle to integrate their existing collection with new pieces acquired to complement the architecture and interiors. Under Sawtelle’s guidance, they discovered a number of contemporary artists, such as Philadelphia-based painter Dan Walsh, whose wall-sized geometrically patterned canvas offers a bold counterpoint to the living room’s clean lines and neutral palette.

At the other end of the home, where the guest room is located, Power created a passageway that acts as a hall and, more importantly, a gallery space. Here, original Georgia O’Keefe drawings rest side-by-side with a Tinka Tarver sculpture installation. The showpiece of the guest bath is a life-sized abstract nude by America Martin. 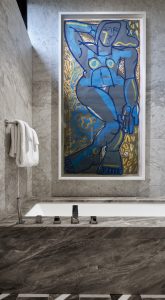 A nude by artist America Martin hangs over the bathtub in the marble-clad guest bath.

Just as Clark’s style, while broadly and deeply influential, was thoroughly contemporary in attitude, so too is the feeling of this home, as represented by the owners’ desire to create an environment that references both modern and historical design attributes. “We furnished the home with pieces that support or were inspired by the mid-century design influence without being overly literal in that process,” says Weingart. “Ultimately, our art adds a layer of visual interest and helps transform our spaces with a well-curated collection that supports the home’s overall vision.”