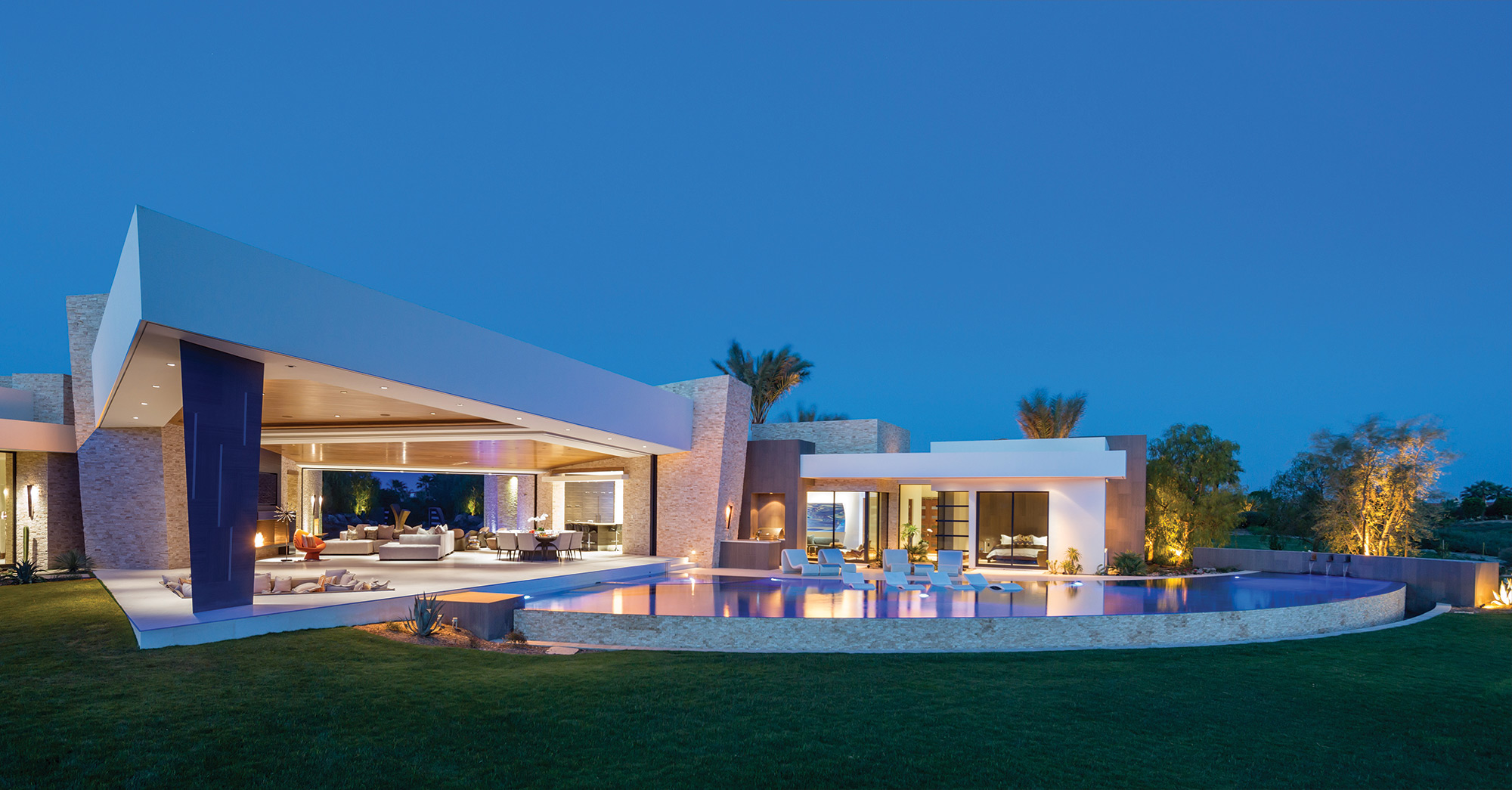 The only angular feature in this house of ellipses is the roof over the rear patio, pointed like an arrow at the mountains.

THE CLIENT CAME TO FRANK STOLZ from a referral. Stolz, of South Coast Architects in Newport Beach, had designed a stunning, period-correct 10,000-square-foot Tuscan mansion — complete with tower — beside the golf course at the posh Madison Club in La Quinta, a small town in the Coachella Valley east of Palm Springs, California, that’s been called the golf capital of the U.S. But the new client wanted something completely different out of his Madison Club residence. He wanted a much smaller four-bedroom getaway, and he wanted the design to be contemporary. Beyond that, he left Stolz free to release his imagination.

“The only thing, when I drive up,” the client insisted, “I want to see my mountains.”

Stolz responded with a design based on two opposing ellipses wrapped in dry-stack, narrow Jerusalem stone, mimicking the sweeping gestures and rugged faces of the Santa Rosa Mountains beyond. The one-story structure hugs the landscape, and a gentle slope of stairs rises between the ellipses, leading to a view through glass pocket doors, through the great room (which Stolz and the client refer to as “the pavilion”) to the deck with its recessed fire pit, the pool, the rolling green golf course and, naturally, those mountains.

When the doors are open, the living area is doubled. But even with the doors closed against occasionally chilly desert winds, the space is made for entertaining.

“It’s not a house that has the true functions of a living room, a dining room and a kitchen. Everything’s incorporated into this one big open space,” Stolz says.

At one end is an alcove with a bar backed by glass shelves storing liquor. On closer inspection, the bar contains a stove, two fridges and a dishwasher, all neatly disguised. And behind one wall, with its own hidden entrance, is a small but complete kitchen that can be used by caterers when the owners entertain, which they often do.

“Frank followed the uniqueness of the site,” the client says. “It makes a bold statement, and the two elliptical walls naturally separate the home into two distinct zones, extending the privacy. The central area can transform based on our needs, whether it’s entertaining a large group or just the family taking in the sunset. It can be formal or casual.”

Stolz designed the house as a sweeping resort suite. It’s not meant for permanent residence, although ostensibly it could be used that way, but it has everything one would desire for a week or a long weekend.

The four bedrooms are actually separate casitas reached by crossing water features to entrances cut into the ellipses. The casitas can also be reached from the garage, or by walking around the exterior. Each is completely private, with its own view, its own private garden, pond and outdoor shower. And each has a kind of “check-in” area, or entryway, that sets the mood.

The pool is another ellipse that wraps from the pavilion deck around the master suite, giving it the illusion of being a private island. Per Stolz’s initial instructions, the owners can still enjoy their mountain views from their outdoor shower.

“The illusion is that the radius continues, so you don’t lose how the house is designed,” Stolz says of the pool.

The interior design was done by Heidi Tate who is headquartered in Whitefish, Montana, where the owners have another house. The firm designed the sunken fire pit, kitchen layout and all the cabinetry, lighting, plumbing, flooring, hardware and wall finishes in the home. They also provided turnkey services.

“My goal for this project was to go above and beyond our clients expectations for creativity and comfort,” Heidi Tate said. “We had a lot to prove with this being our first modern home.”

One of the things that drew him to Stolz, the owner says, was the breadth of South Coast Architects’ work, which is not confined to any one style. The 25-year-old firm has a staff of five, including Jose Alano, who examines Stolz’s original sketches. Together they work out the elevation and the aerial views, then Alano sits down and spends several days making museum-quality drawings using colored pencils. Only then do they turn to the computer programs.

“We’re fortunate that we can be diverse in our work,” Stolz says. “It’s like I get to drive different cars — one day I’ll drive a Ferrari, another day a Bentley, next day I’ll be in a Rolls-Royce. I can be period-correct or work with my own visions.”

One end of the roof over the house’s expansive deck reaches a sharp point. The owner had concerns about too much direct sun. Stolz bet him that in mid-May, the line of shade from the point would shelter him from the sun, though beyond that, no guarantees.

Capped by an alder ceiling, the great room is a vantage to the everchanging light on the mountains. 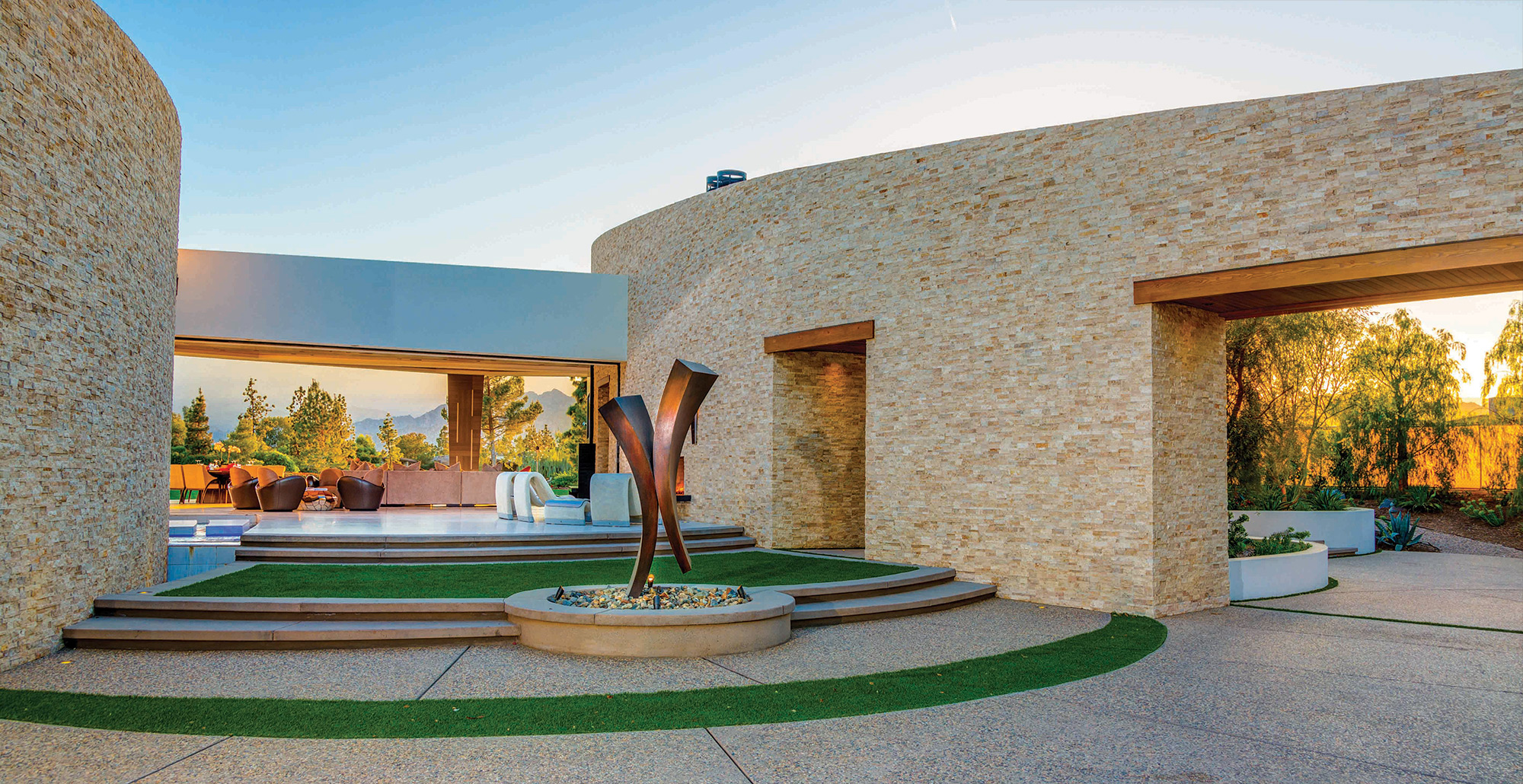 Entering through the opposing ellipses of the two wings, the eye has an uninterrupted view through the great room to the golf course and mountains. 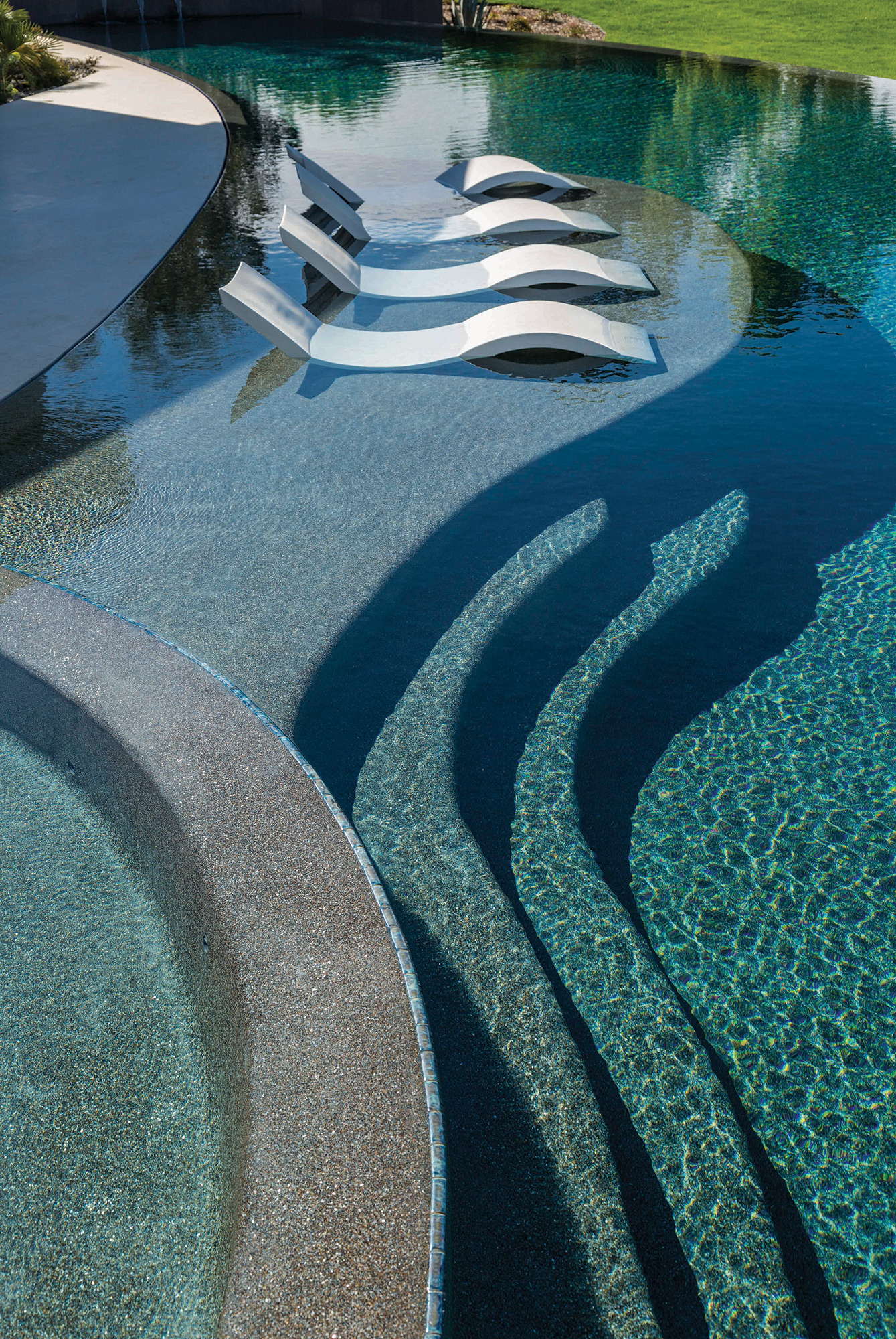 Even the steps in the pool echo the ellipses of the design, with a ledge for chaises in the water. 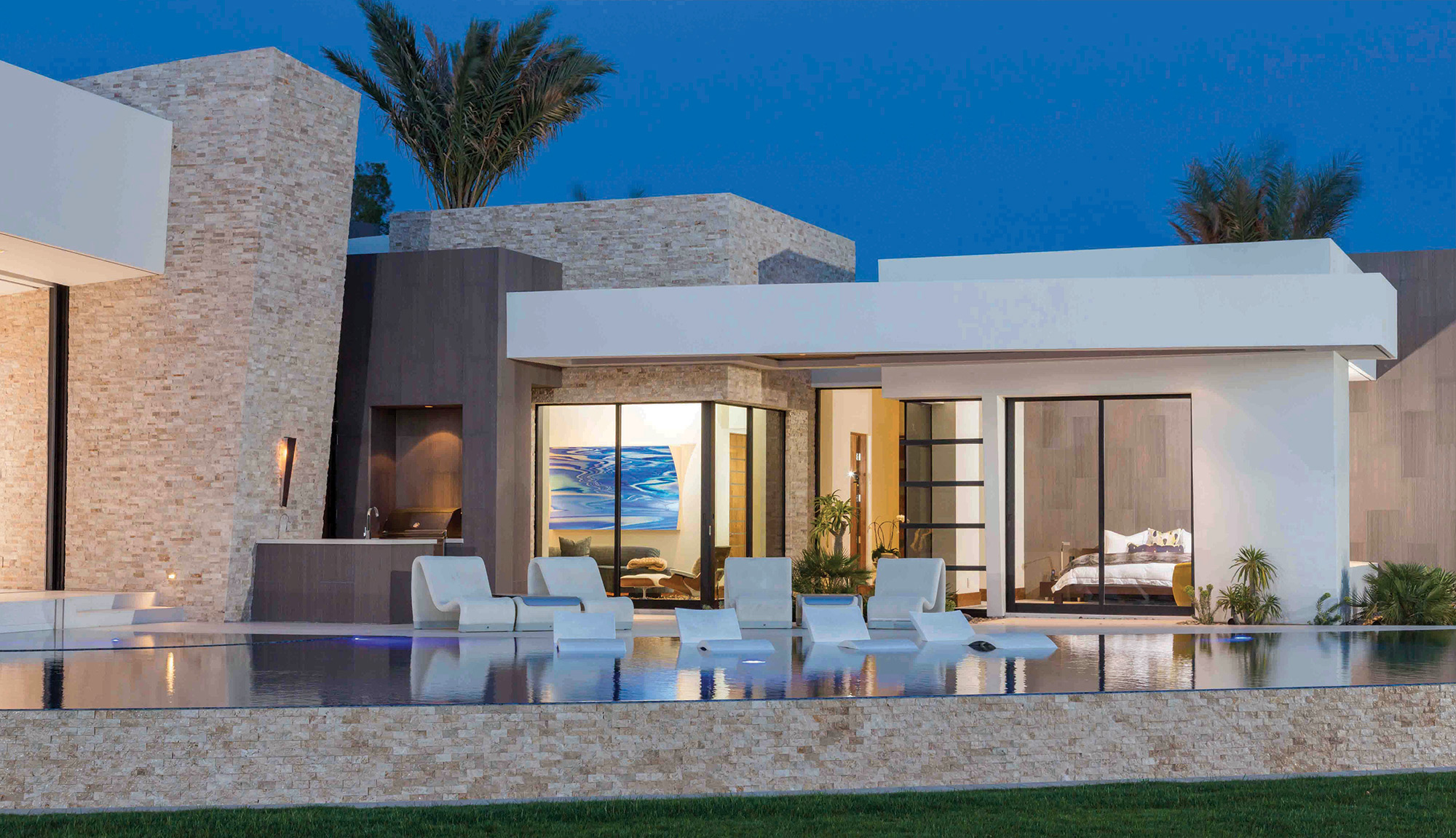 Framed by the pool, the master suite has a luxurious sense of privacy.

The glass pocket doors are rolled back, erasing the line between indoors and out. 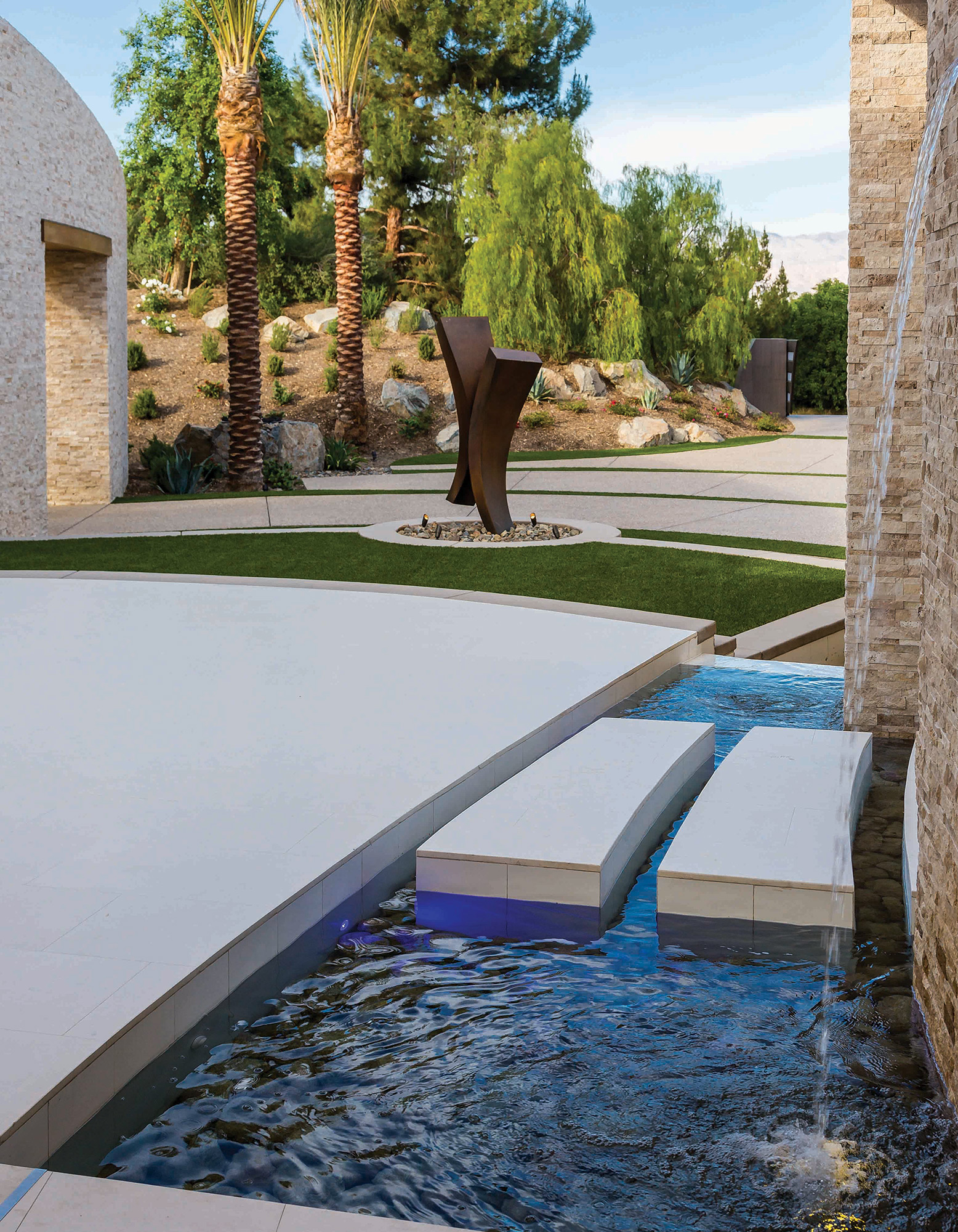 A water feature is the entryway to the wing with the master casita. 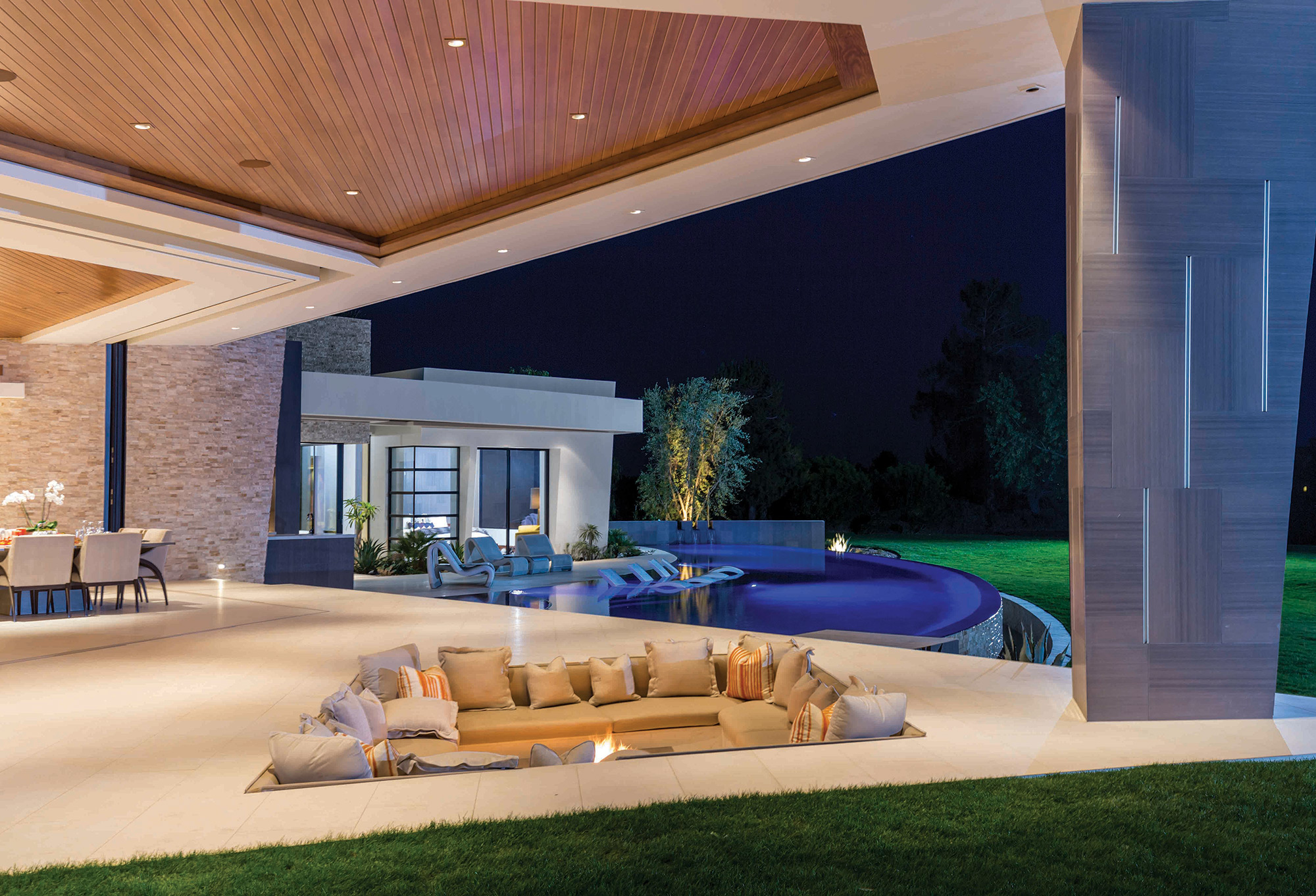 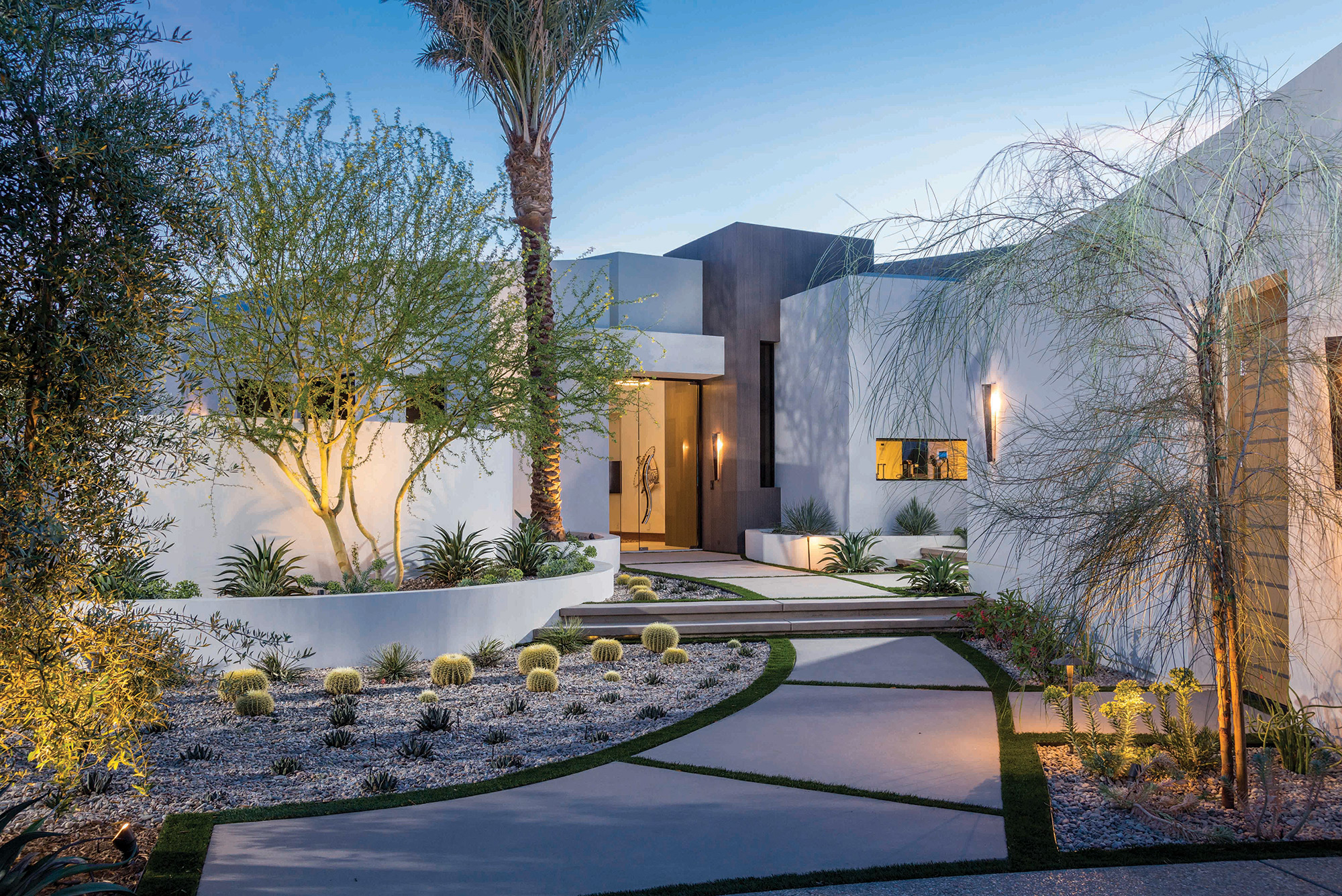 Each of the four suites has its own private garden.