William Berra paints historical subjects — Rome’s Temple of Saturn, old New Mexico churches, Italy’s Aragonese Castle, the Grand Canal of Venice, Montepulciano in Tuscany to name a few — but it isn’t the history that draws the Santa Fe plein air master to his subjects. It’s the here and now.

“In a way, I think I’d rather see the Roman Forum as it is today than in its heyday,” he says while sitting in Santa Fe’s Nedra Matteucci Galleries, which will exhibit several of his new works, November 10–30. “Now, it really draws your imagination. It lets you create your own fantasy, your vision. It’s awe-inspiring.”

Which is what several artists, gallery owners and art collectors around the world say about Berra’s own motifs and vision.

“I’ve seen him grow as an artist in various themes,” says Nedra Matteucci, who has known Berra for 25 years, since they both started out working for retired gallery owner Forrest Fenn. “He’s done some beautiful things and has really broad- ened his scope of painting. He’s come into his own.”

That road is a bit of a history lesson in itself.

Although he has been painting “forever” — “It’s the only thing I could do as a kid,” he says — and studied art in high school in York, Pennsylvania, and at the York Academy of Art, it wasn’t until after he dropped out after a year at the Maryland Institute College of Art in Baltimore that his art education truly began.

He experimented with Abstract Expressionism and non-objective painting, then took off across America.

“The best way to get an education is to find something you’re passionate about,” he says.

He found that passion first in New Mexico. In 1976, at age 24, his travels landed him in Santa Fe. Like many artists before and since, Berra became mesmerized by the mythical New Mexico light and landscapes, and he stuck around, falling in love with plein air and becoming hugely influenced by the Macchiaioli painters of 19th-century Italy.

In 1978, his work found its way into the New Mexico Museum of Art’s Biennial Exhibition. Berra hasn’t slowed down since.

While painting, he took jobs working in galleries. That’s where he met Matteucci, when both were working for Forrest Fenn’s gallery, meeting people like Fenn, and artists like Eric Sloane and Fremont Ellis, not to mention presidents.

“The art world is an amazing thing that allows you to connect with people who are interesting,” Berra says. “It shows you the other side of the fence, what the artist doesn’t see.”

What Berra was seeing during this period was what he was painting, mostly Northern New Mexico landscapes. “After 12 years of painting the Southwest, I’d done almost every nook and cranny of Northern New Mexico,” he says. “I needed new inspiration. That’s what traveling is all about.”

So he and his wife, Alanna Burke, a writer and his business partner (“We feed off each other.”), began traveling. To Europe … Hawaii … across America. He discovered new city scenes, country scenes, and even still life and figurative scenes. Since he always returns to his motifs — wandering junipers, clouds, churches, fence posts, figurative gestural portraits, beach scenes — Berra never stopped paintingSouthwestern scenes.

“The Southwest and Europe are similar,” he says. “You can see layer and layer upon history, and see how each culture has influenced the other.”

“He’s not restricted to one location,” says Joe Sylvan, who has carried Berra’s work since he opened The Sylvan Gallery in Charleston, South Carolina, in 2002. “He paints scenes that can be universal. I’ve noticed that a lot of other artists are attracted to Bill’s work. It has a softness and a great sense of light. He leaves a lot to your imagination.”

Plein air reaches him, touches him, challenges him.

“It’s anticipating what (the scene) is going to look like 10 minutes later when the sun sets,” he says. “It’s the education of seeing how it’s going to change. You try to anticipate a motif. You pass it by another day, and it looks different, and you think, ‘Why are we doing this?’ Because we love it and want to draw attention to things.

“If you’re lucky enough and get a sense of place, you sort of know when you want to go to paint. But sometimes it’s 50 yards beyond that. You rubberneck it. You go to see the cliffs of Abiquiú (in Northern New Mexico) but you wind up with Pedernal (a mountain and frequent subject of Georgia O’Keeffe).”

Often that investigation leads to a surprise.

His still-untitled show at Nedra Matteucci Galleries will include a few surprises, even for Berra.

“I don’t know what it’ll include,” he says. “I always save a few pieces. I have a new series of figurative works, and I’ve started a series of a spot outside Florence, Italy.”

Says Matteucci: “I’m really interested in seeing what he brings.”

Berra’s work certainly keeps admirers interested. He has even been mentioned in a Stephen King novel, Duma Key (2008). “Better stuff, I thought,” King’s narrator remarks when seeing Berra’s oils and Stephanie Shachat’s photographs on a gallery wall, “than I could do in a century.”

And art has given Berra a history lesson.

“The neatest thing about art,” Berra says, “is it educated me and it taught me history and a sense of the world.” 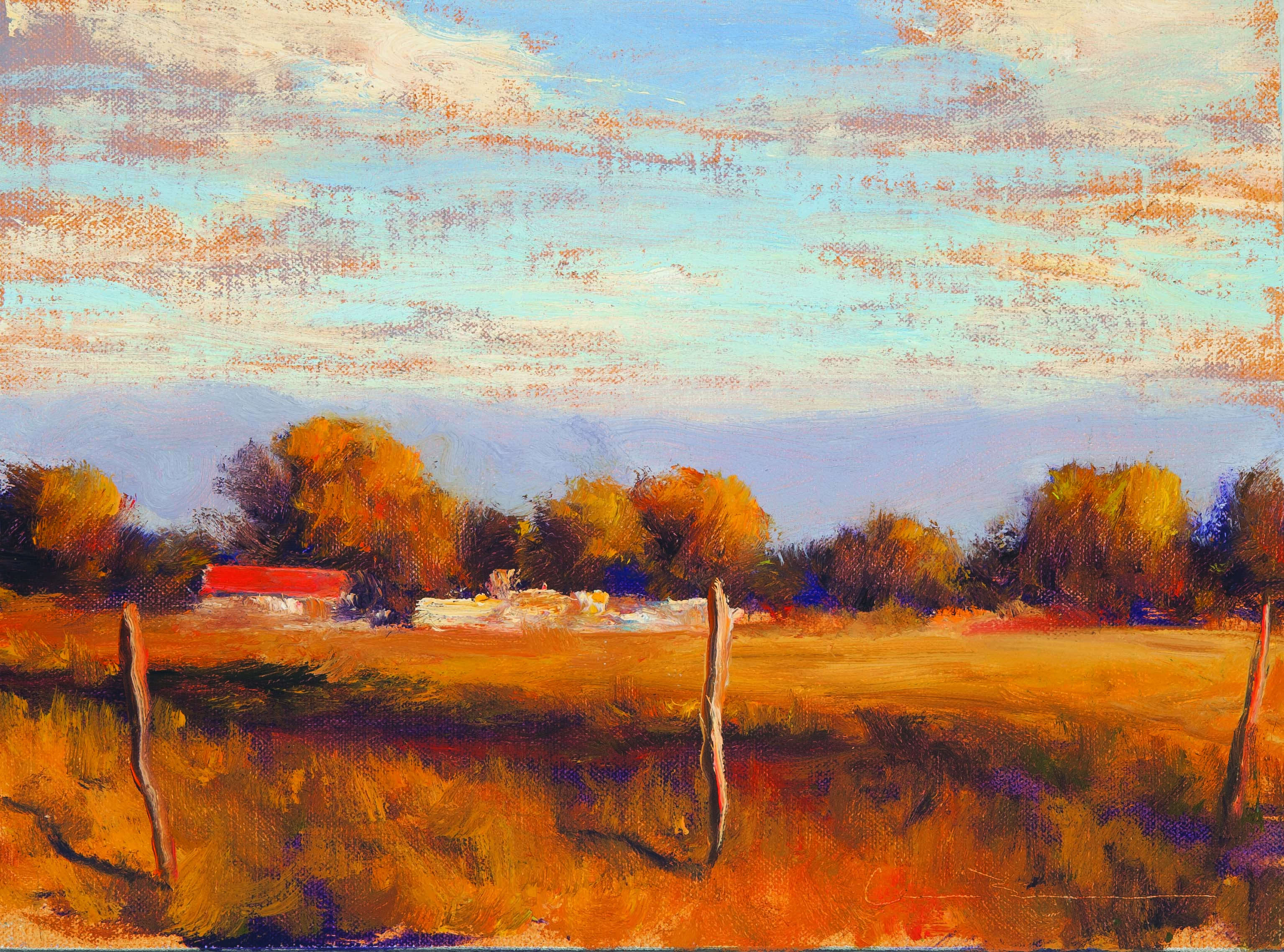 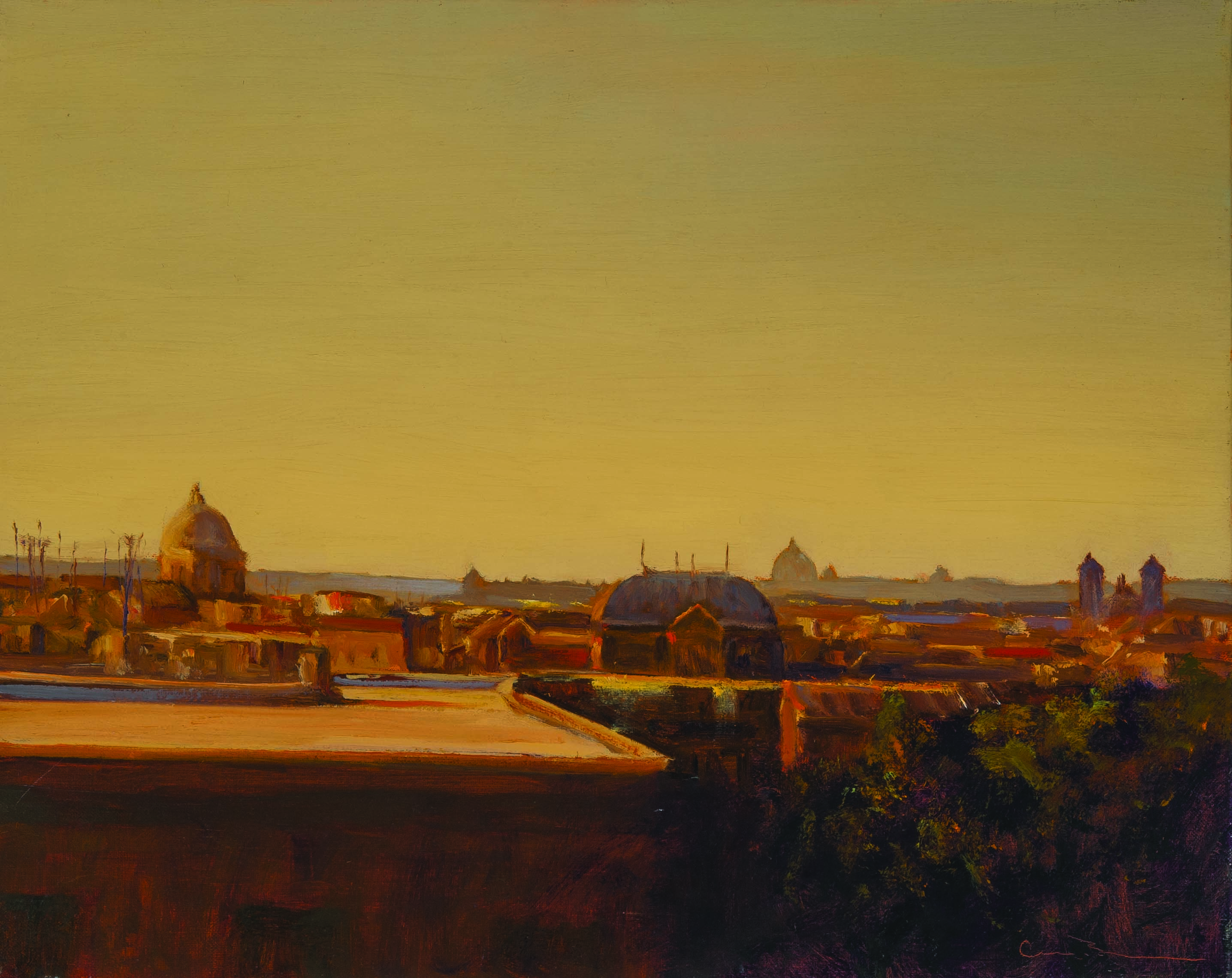