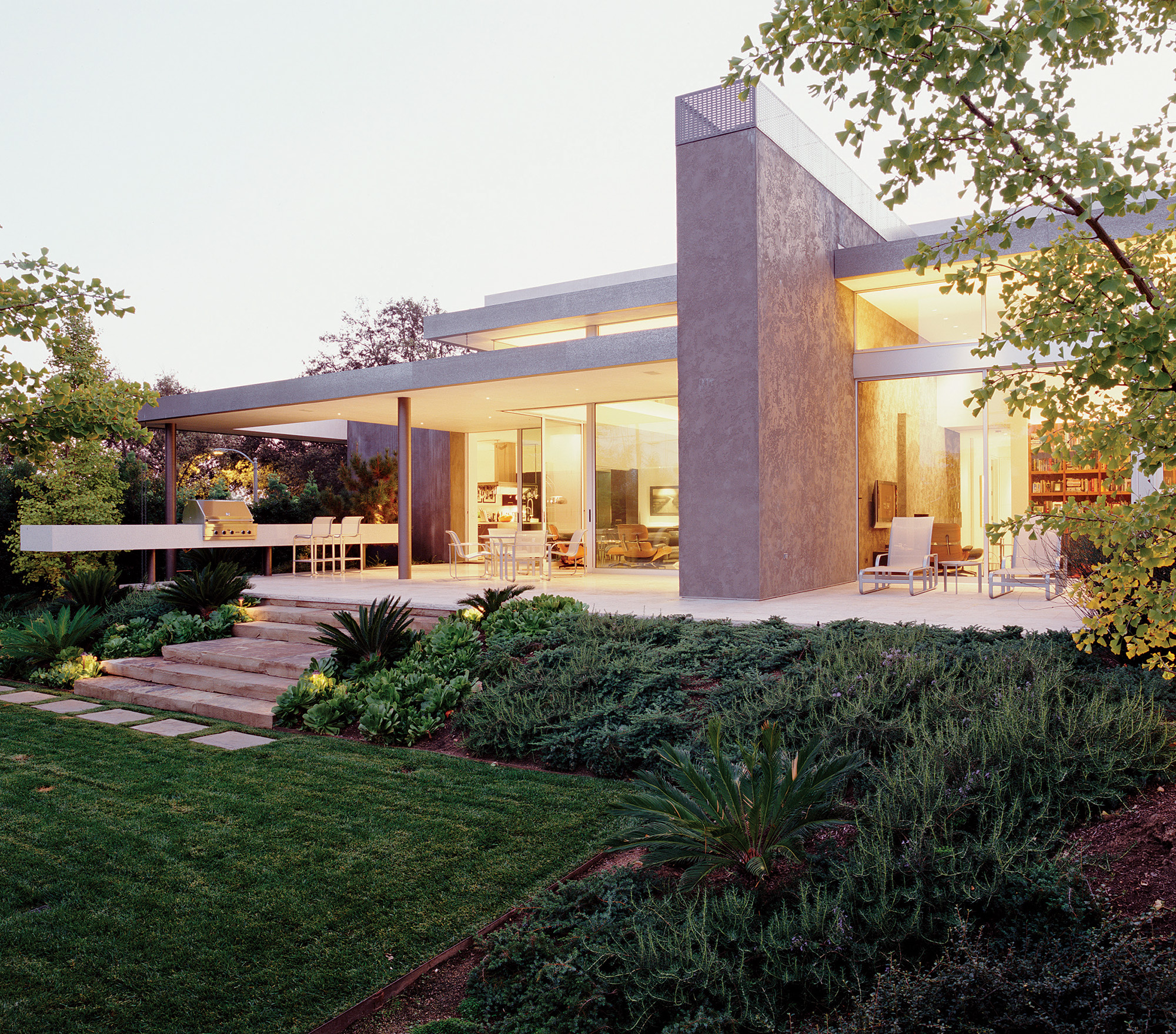 Floating roof planes reinforce the direct and open nature of the floorplan. Outside, tall hedges at the perimeter and greenery everywhere make the yard an oasis of tranquility. Photos: Art Gray

KHARLENE BOXENBAUM KNOWS WHAT SHE LIKES and she doesn’t mince words. “Unless horses are going in, I think garages are really terrible,” she says.
Suitably, the garage in her Beverly Hills home is underground, and unseen. A victory for the artist, the sacred over the profane.

A contemporary painter and devotee of mid-century design, Boxenbaum was equally precise about what she wanted for her home. She envisioned a spare, open structure that brought the outdoors in. She needed room to create her large-scale canvases and space to display them. She wanted a home that would fit around the collection of Bauhaus furniture she and husband, developer Charles Boxenbaum, had collected over a lifetime together. She wanted simplicity, functionality and beauty.

As with the Boxenbaum residence, all of the firm’s projects — spanning residences, commercial and institutional buildings around the globe — are guided by the principle of “Multicultural Modernism.” Coined by founding partner Ehrlich, Multicultural Modernism is a humanistic approach to architecture that starts with a response to the structure’s inhabitants and is driven further by the constraints of site, climate and the inspiration of culture.

“It’s about understanding people and place,” says Yanai, who is director of the residential studio at EYRC and has both Japanese and California heritage. It’s an idea that developed by observing people and the places they inhabit all over the globe. Ehrlich, who considers himself an “architectural anthropologist,” spent several years in Africa as the first Peace Corps architect in Marrakech, Morocco, and later, as an architecture professor in Nigeria.

How the firm’s defining principle is at work in the 9,000-square-foot Boxenbaum residence, says Yanai, is two-fold. First, the home is a response to its inhabitants. “The design was about creating spaces for displaying art, and spaces for the creation of art.” Second, he says the home’s attention to the relationship between indoor and outdoor spaces reflects the culture of Southern California and the couple’s affinity for the Mid-century Modern designs of Craig Ellwood. The home is very much open to the exterior with lots of glass. “In this case, we had to combine that with a lot of vertical art walls for her canvases. It’s either glass or art wall. [There is] very little in between.”

The entire top floor of the home is a working space for Kharlene. The framed walls are functional easels for the painter and, as a visual allusion to construction sites, a nod to her husband’s career as a developer. The studio was designed to be divided into four bedrooms, Yanai explains, should the couple ever decide to sell. The fluid design allowed Charles to protect his investment, says Yanai, “and is another way in which the architecture is a reflection of the couple.”

To deal with the issue of the garage, the architects lifted the home off the ground by three-quarters of a level. Not only did that free up the entire first floor for living space, but, according to Yanai, it created an important physical and psychological separation from the busy sidewalk and street. Set on the corner of a four-way intersection opposite a school, the elevation allows the home to stay very much a part of the neighborhood but with an important buffer from the noise and traffic. “It is so tranquil,” Kharlene says.

Adding to the tranquility is the relationship the interiors have to the lush, manicured yard. “We consider the yard to be a piece of art,” says Yanai. The firm hired noted landscape architect Nancy Power, now retired, to design the home’s grounds. By employing tall hedges and trees at the perimeter, Power made the home feel even more secluded from its busy, urban setting. “The house is like an island,” Yanai says.

Inside, the home is sculptural with big volumes in various scales. “What they really excel in is volume,” Kharlene says. “The rooms are almost like cubes. The height of the ceiling and the width and length of the floors are really the same.”

In order to be creative with a modest budget — something that was important to Charles, says Yanai — EYRC used custom stucco to give the volumes both shape and texture. The stucco, used on the exteriors and two interior walls, was created with an artisan and was both cost-efficient and artistic, yet another way in which the design reflected its inhabitants, says Yanai.

After living in the residence for more than a decade, Kharlene delights in her home. “There are surprises every day,” she says, depending on time of day, the weather, the way you look into a room or where you decide to sit down. “It’s just an interesting house,” she says. “When I sit in the living room and listen to symphonic or liturgical music, this house is like a cathedral.”

For a woman who does not like garages, living in a cathedral dedicated to art seems just right. 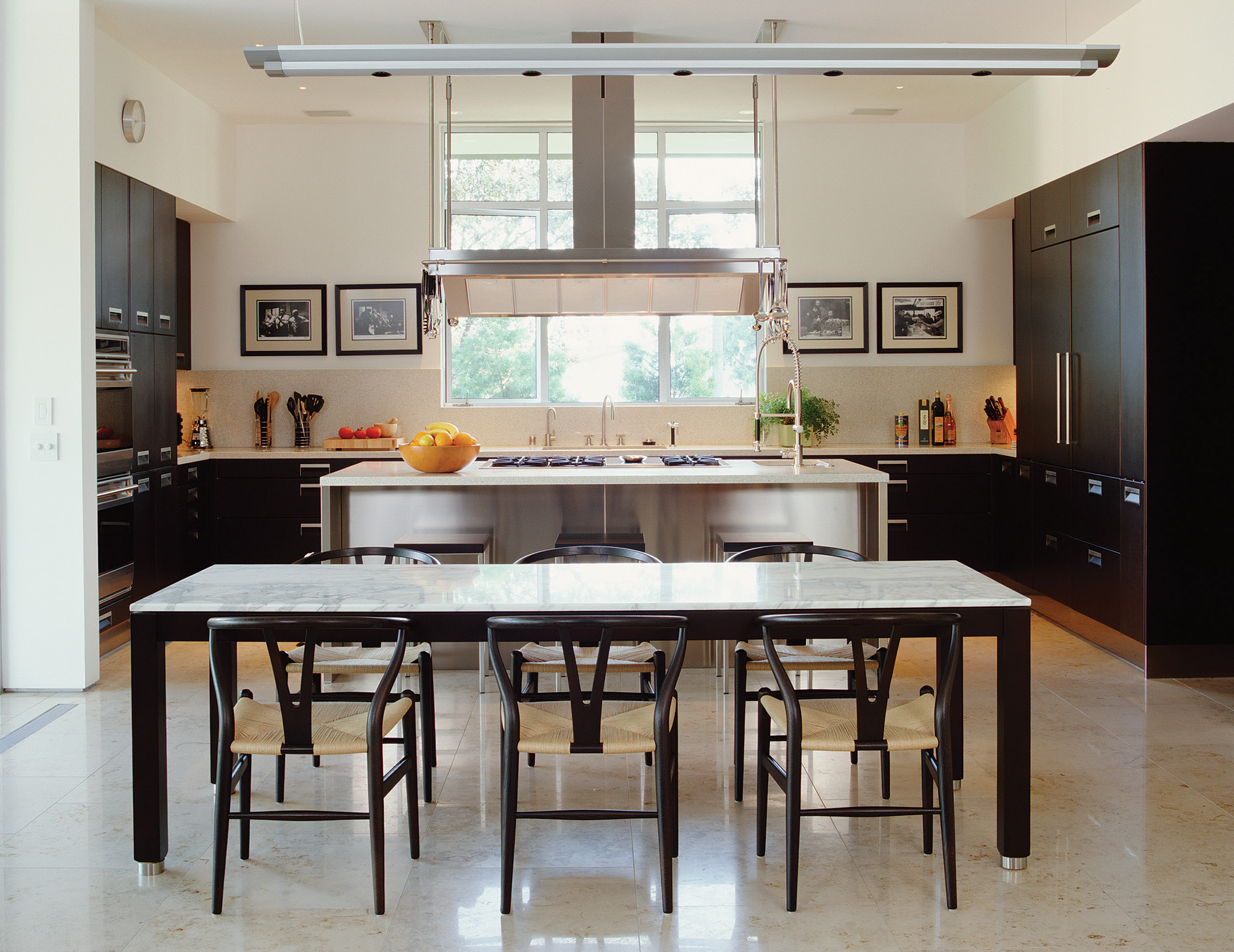 In addition to stucco walls, the architects added color and texture in the form of stone floors in the kitchen. Photos: Art Gray 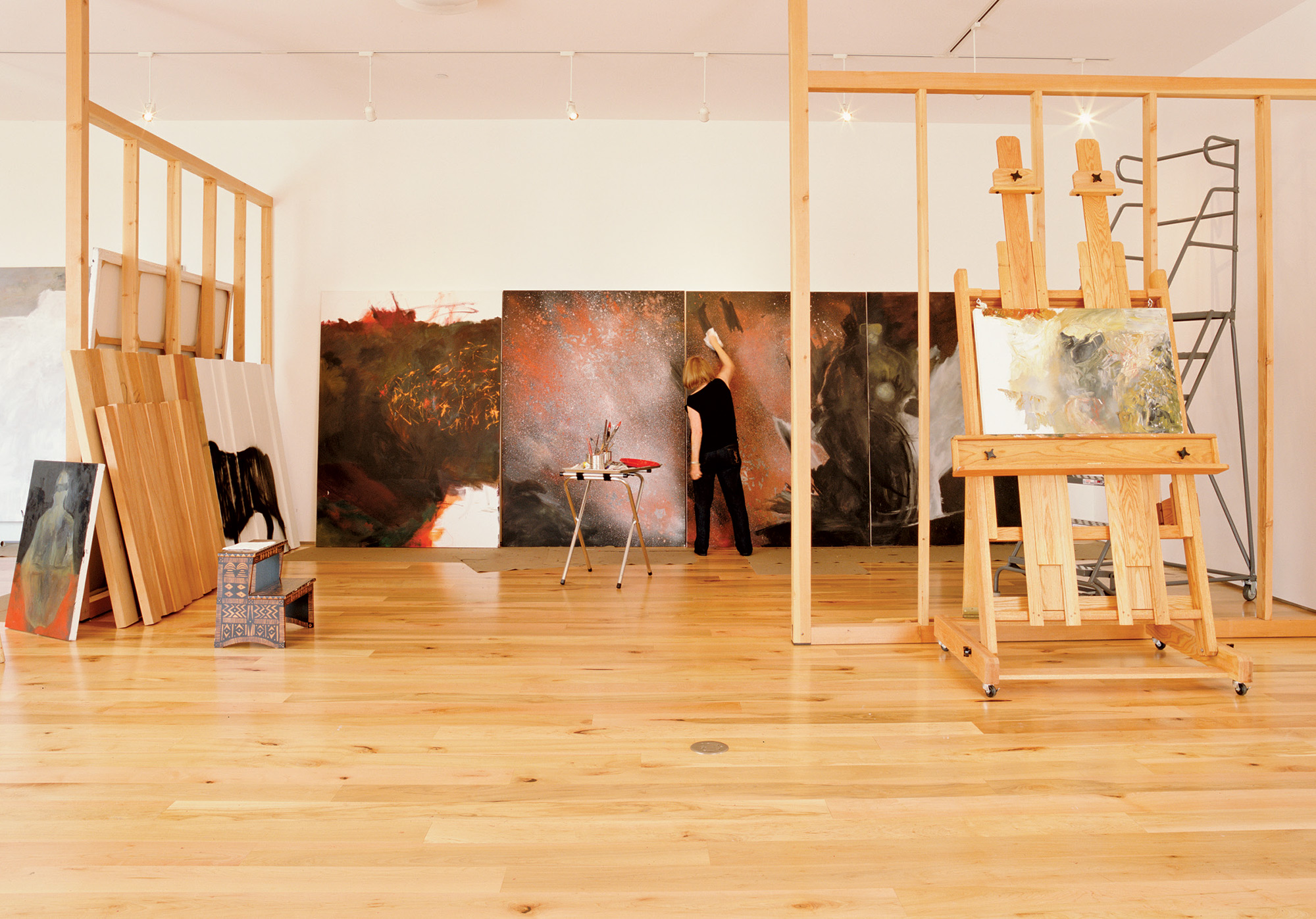 The easels in Kharlene’s studio are movable. Even though this is the smallest working space she’s had over the decades, Kharlene says this studio feels larger than all the others because it is so functional. Photo: Art Gray

In the main hallway, set against a rust-colored wall, the Boxenbaum’s collection of Eames chairs make a strong artistic statement. Photo: Juergen Nogai 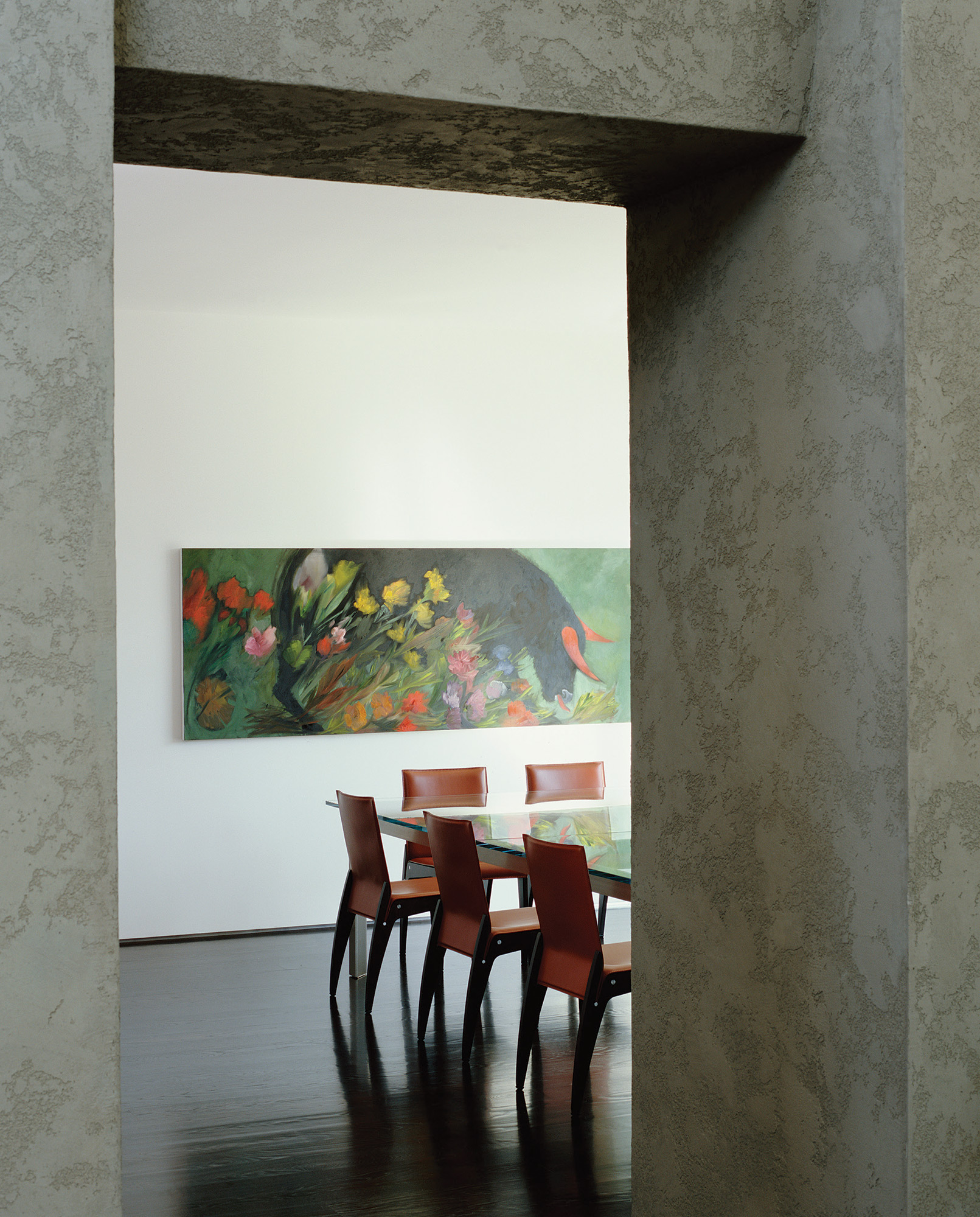 Calling her home both “interesting” and “masculine,” Kharlene wanted the design to be spare — as in the dining room, shown here — to showcase collections of both mid-century furniture and art. Photo: Art Gray 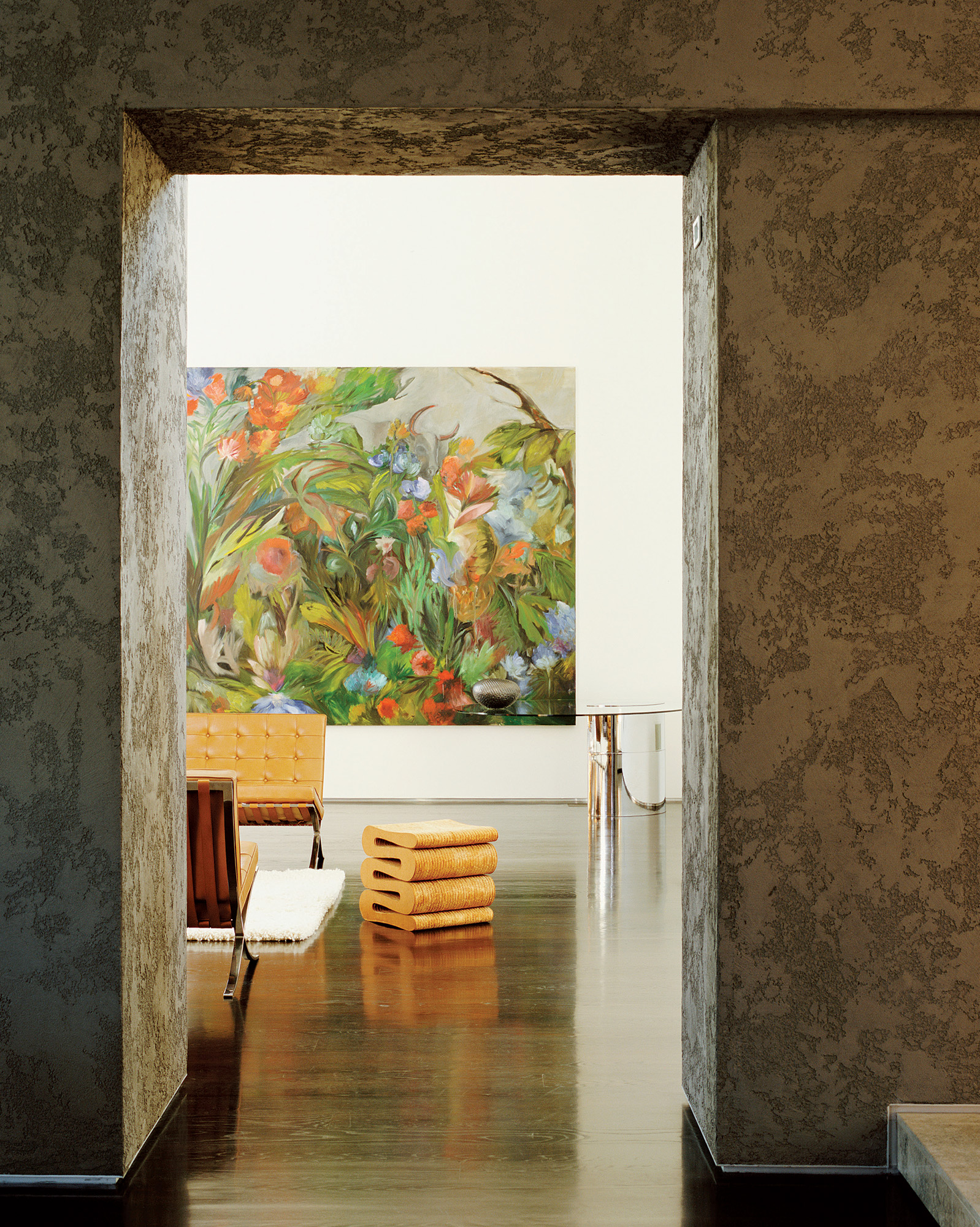 The stucco wall is not only sculptural in form, but the texture and shades of gray make it look like a piece of art in the process of being made. Photos: Art Gray 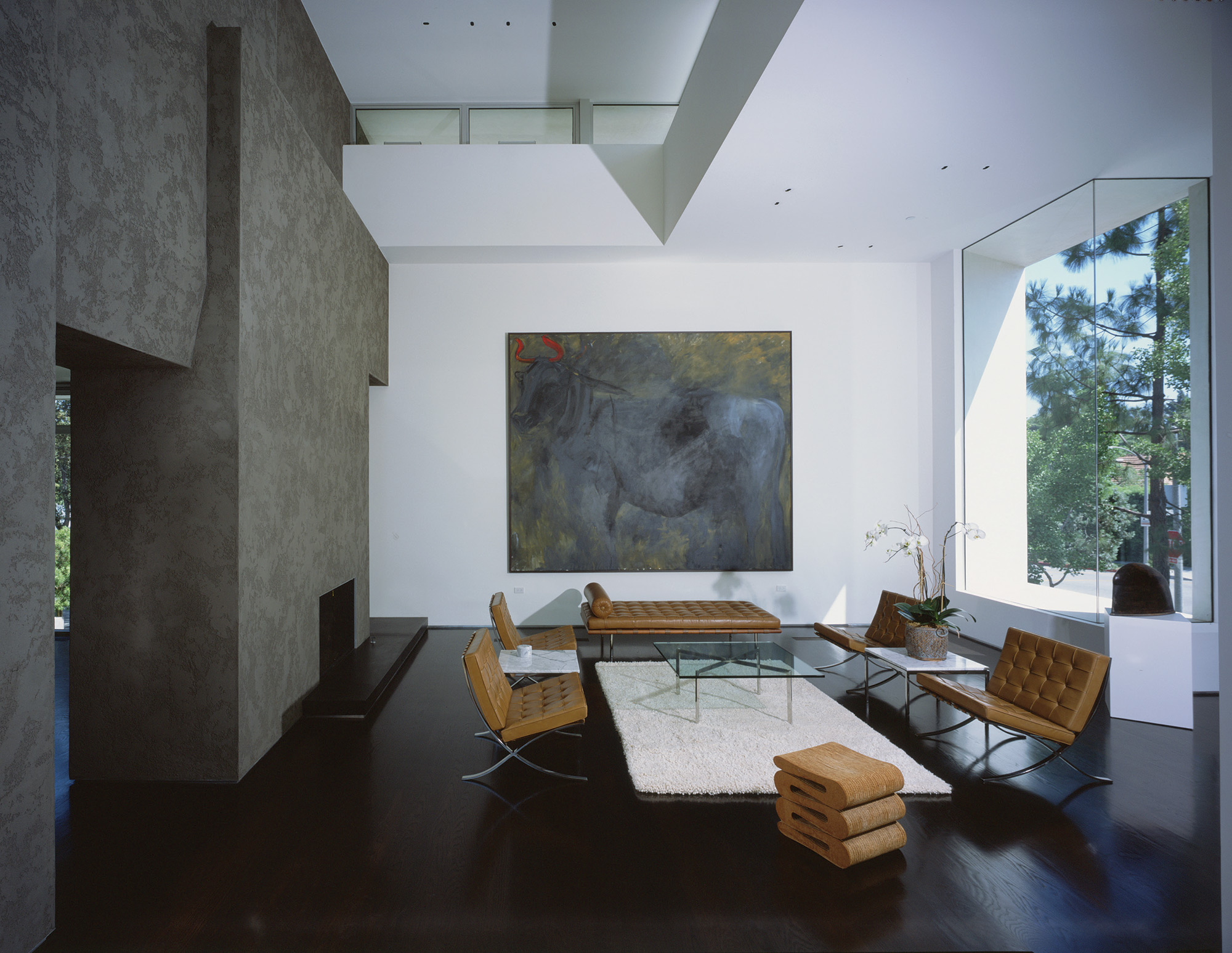 Kharlene’s favorite room in the house is the living room. “I love the living room. It’s just gorgeous,” she says. “And we never go in there because everybody always goes where the food is.” Photo: Juergen Nogai 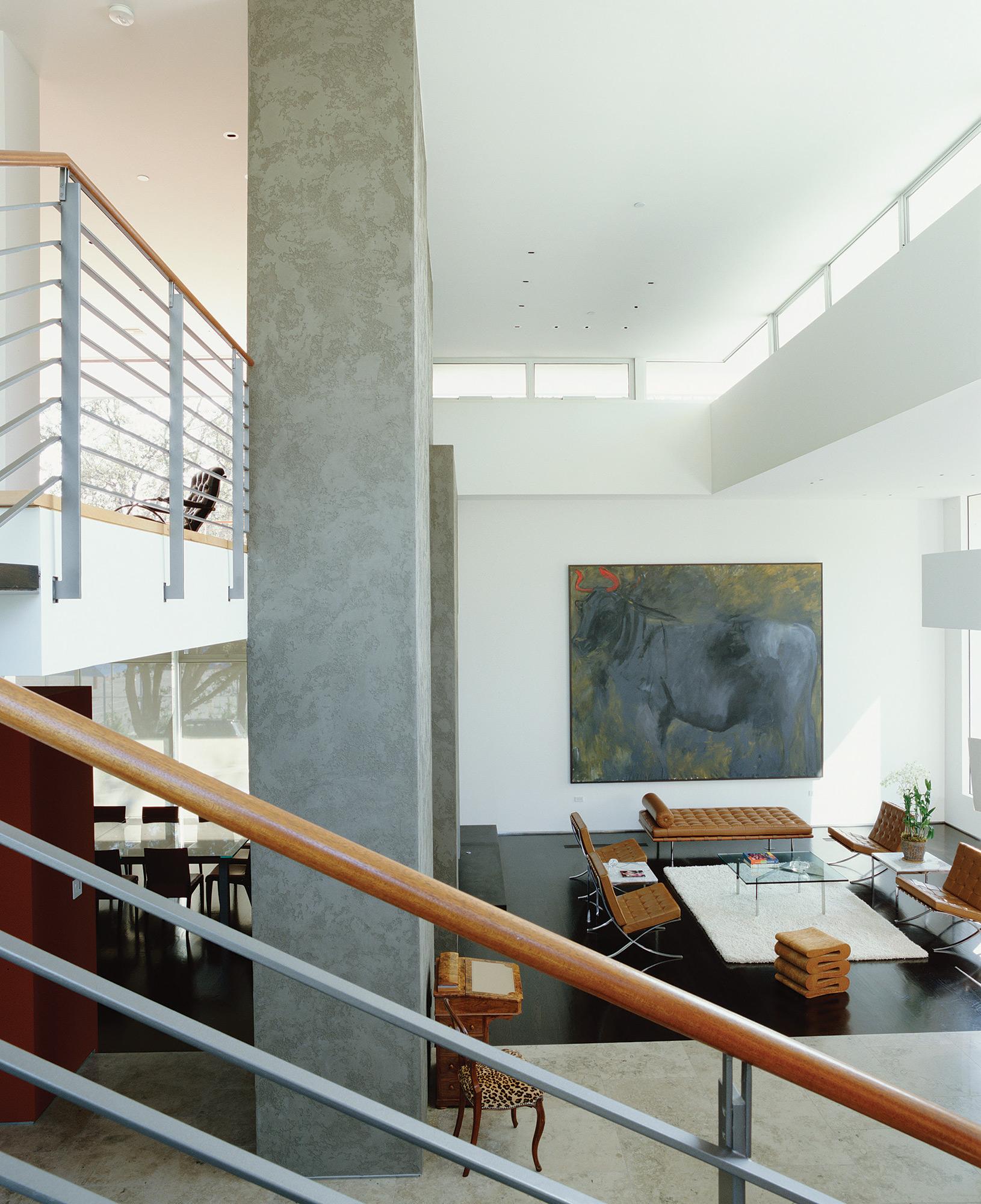 Yanai used clerestory windows, high above art walls, as a way to preserve wall space for art and to bathe the space in natural light while protecting the art from direct sunlight. Photo: Art Gray 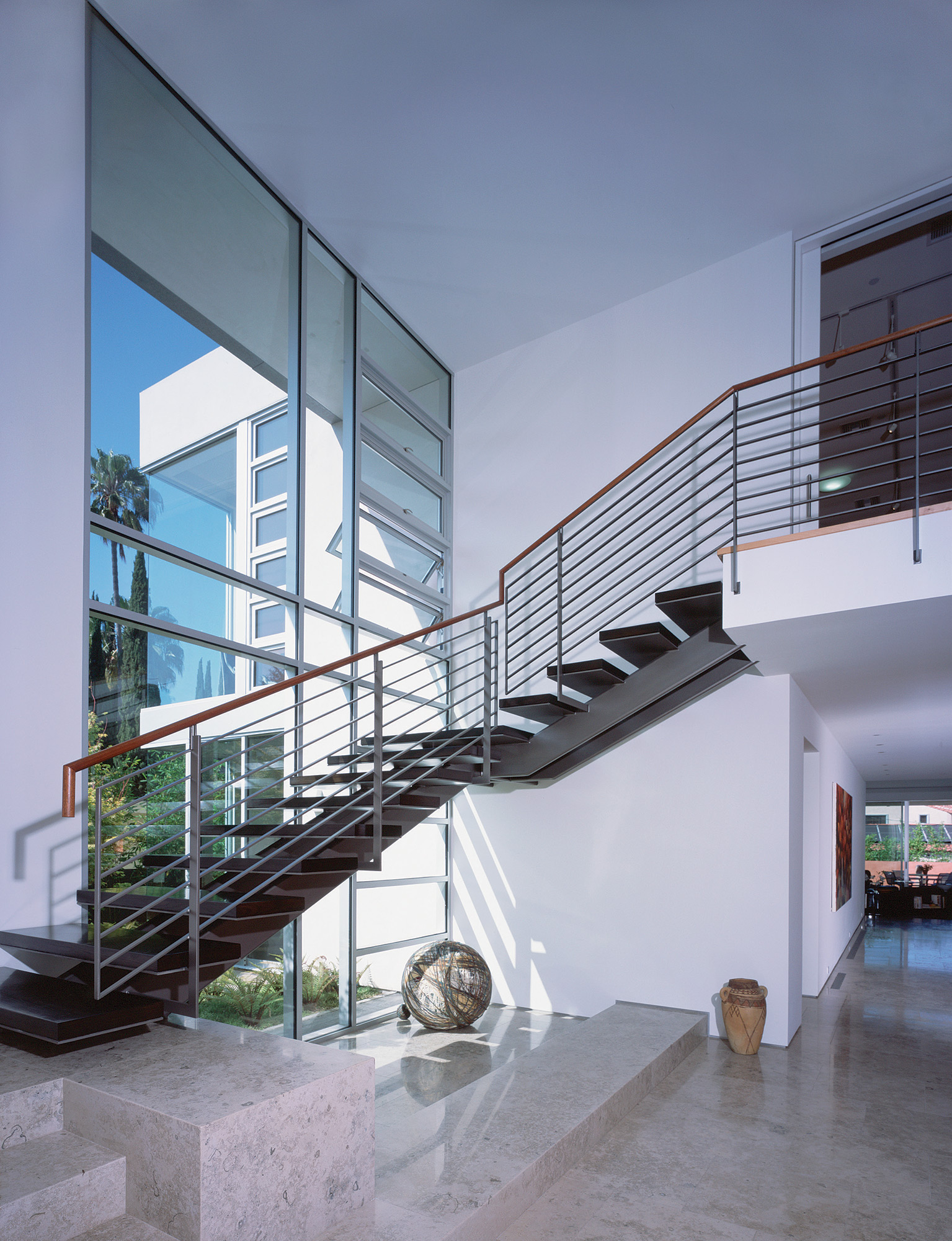 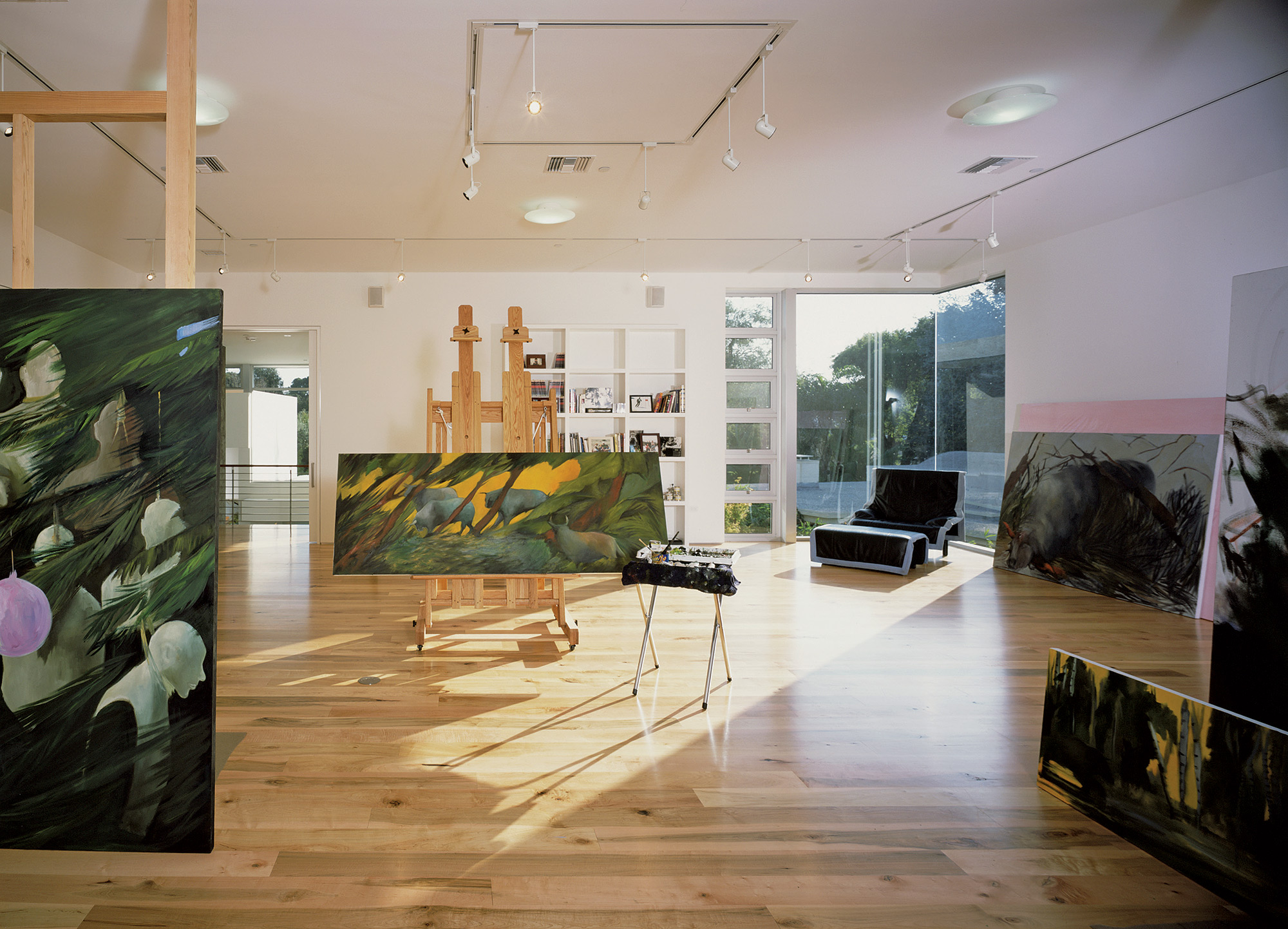 Next to the studio is a viewing room for Kharlene’s art, with hanging space, a place to sit and bookshelves. Books, Kharlene says, are the biggest decoration in the house. “There are books all over the place.” Photo: Juergen Nogai 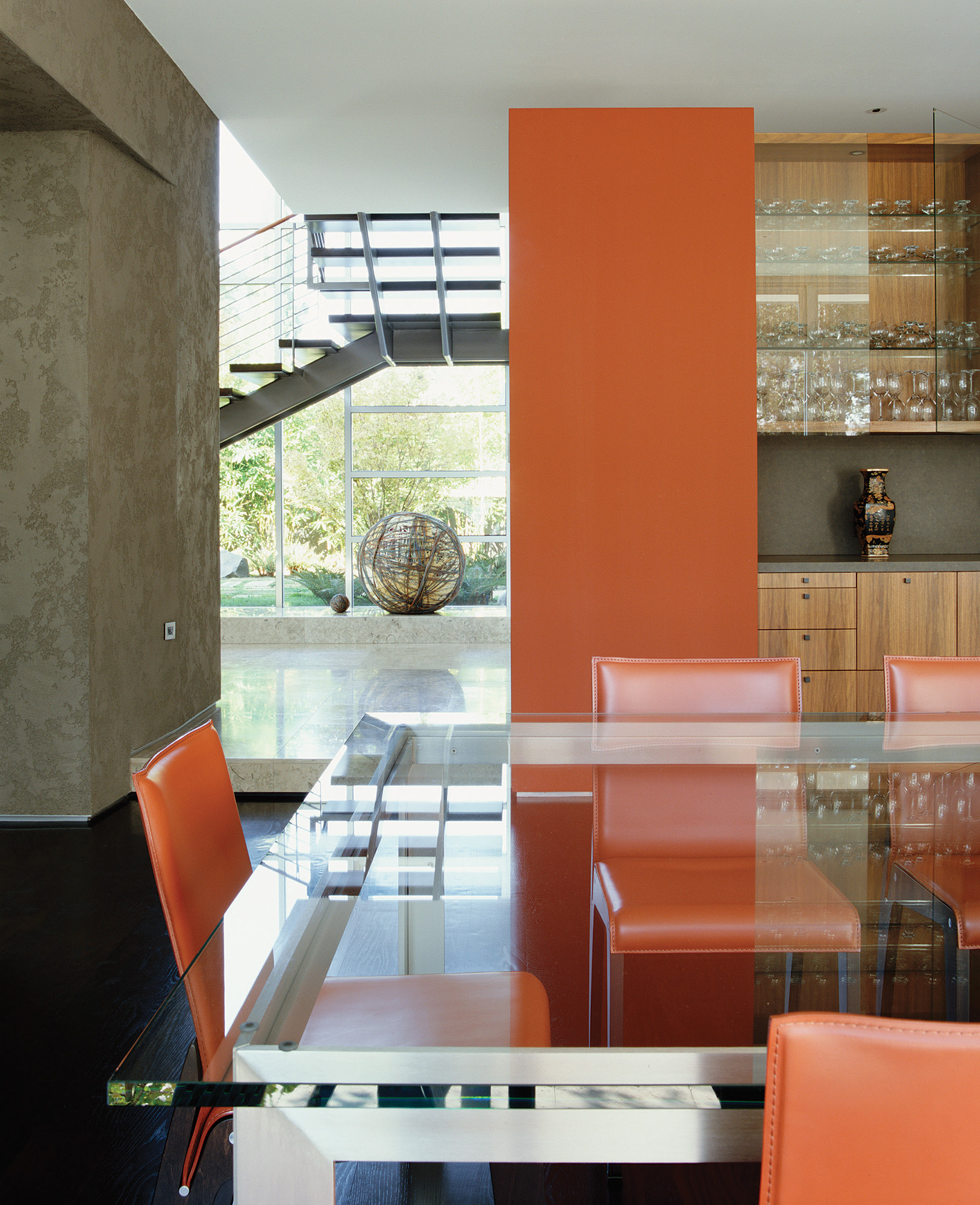 In addition to stucco walls, the architects added color and texture in the form of dark wood floors in the dining room. Photos: Art Gray