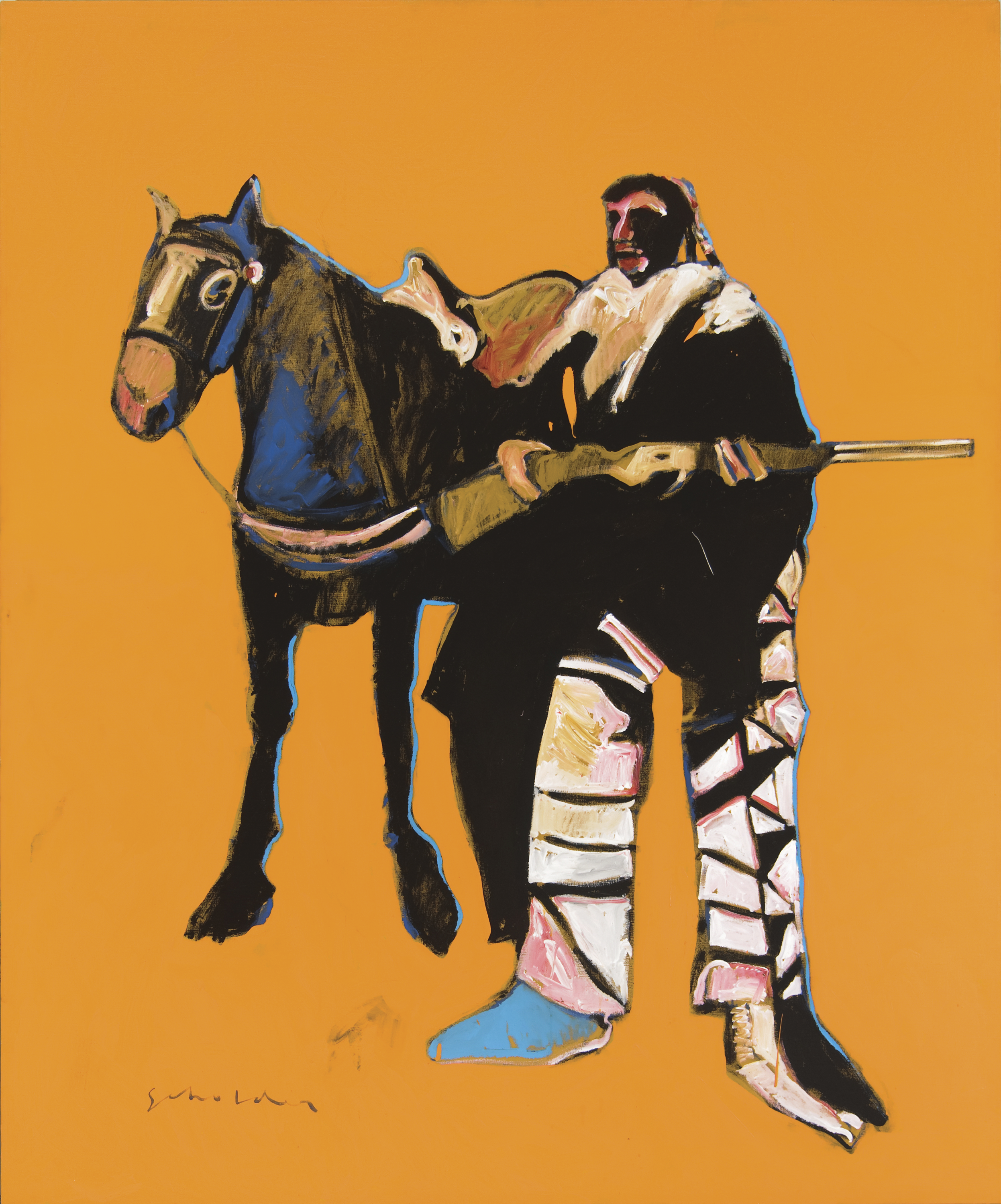 THE NAME FRITZ SCHOLDER is synonymous with Native American art. As a painter whose career overlapped the 1960s, and whose sensibility reflected the era’s zeitgeist, his work raised a provocative question: What happens when Native American art and Pop art intersect?

Scholder desperately wanted to be seen simply as an artist, free of being labeled an Indian artist. During the ’70s, his work reached its acme, but his reputation had already begun its descent into the abyss. Scholder faced a conundrum: If he didn’t produce Indian iconography, his work didn’t sell; but if he painted what the art market demanded, he sacrificed his integrity. With the reality of making a living, and the pressure of showing at Scottsdale’s Elaine Horwich Gallery, Scholder did what he had to do. His canvases were filled with wry comments on contemporary Native American life. Tribal members were portrayed drinking beer, eating ice cream cones and dressing up as parodies of themselves.

Scholder’s strategy paid big financial dividends. There’s a famous black-and-white photograph of the artist, resplendent in front of his Rolls Royce convertible, with a giant multi-armed saguaro cactus in the background, holding a leash with a gorgeous Afghan hound on the end. The portrait screamed success. The flip side, which caused Scholder tremendous mental anguish, was that he had compromised his legacy and place in art history.

But Fritz Scholder had accomplished more than he knew. Thanks to his trailblazing ways, a number of the current crop of Native American artists have successfully taken his Pop approach, and updated it to reflect their visions. What’s more, they can increasingly be seen purely as artists, regardless of whether their subject matter reflects their heritage. It was a dream Scholder would have given anything for.

Take Diego Romero. A Cochiti Indian, Romero was raised in Berkeley, California, received his masters from UCLA and currently resides in Santa Fe, New Mexico. He’s managed to pull off the neat trick of staying true to his roots, while crossing over into the realm of Contemporary art. Recently, Romero had a show at James Kelly, one of Santa Fe’s top galleries. He exhibited ceramic bowls, illustrated with imagery derived from popular culture, such as his take-off on the feminist comic-book icon Wonder Woman. Saying his work updated the Pop tradition is no stretch. In the recent past, Romero spoofed Roy Lichtenstein’s famous Crying Girl, depicting the original blond woman as a dark-skinned Indian. But what made the work Romero’s own was how he covered the rim of the bowl with geometric designs, derived from ancient Mimbres pottery.

As any student of Native American history knows, the Mimbres people lived roughly 1,000 years ago in the Southwest corner of New Mexico. Artists often decorated the center of their bowls with pictorials of indigenous creatures: hares, tortoises and Gila monsters. Romero was able to transform their work by creating a visual language that, much like Scholder’s, reflected on what it meant to be Native American. A remarkable draftsman, Romero would paint a central image of two Indians playing golf, commenting on the dissonance of living in two worlds. As Romero put it, with a touch of ironic humor, “What could be more absurd than Indians on a golf course?”

Recently, I watched Romero participate in his tribe’s annual Corn Dance at the Cochiti Pueblo, located an hour from Santa Fe. Fascinated by the authenticity of the ceremony, I noticed how Romero was not only a strong and rhythmic dancer, but how he derived spiritual strength from the ritual, which he channels into his art. Romero is the rare artist whose work’s intellectual foundation, aesthetics and sheer visual punch forge a lasting connection with the viewer. And like the great Mimbres pottery, his clay vessels will only look better over time.

Another artist, whose work represents one of the many tributaries that flowed from Pop art is Frank Buffalo Hyde. Born in Santa Fe, and a member of the Nez Perce and Onondaga people, Buffalo Hyde’s concerns as an artist revolve around his “fragmented contemporary life” as a Native American. In this instance, there is a parallel with the work of the major Pop figure James Rosenquist. His paintings from the ’60s were a pastiche of the “stuff that surrounds us,” including such disparate images as the front grill of a Ford, a bottle of Coca-Cola and a plate of Chef Boyardee spaghetti. Buffalo Hyde takes over where Rosenquist left off. By combining Native American icons — buffaloes, ceremonial canoes, warriors on horseback — with items lifted from everyday life, like a Rubik’s Cube, Buffalo Hyde’s work mirrors the sensory overload he experiences on a daily basis.

Some paintings, like the one that depicts Iron Man, the Marvel comics superhero, mine the same rich vein of pop culture ore that Romero also draws sustenance from. Unlike Romero, whose work is more about making a social statement on how the Indian nation lives versus our perception, Buffalo Hyde’s work is far more private. His pictures reveal an inner struggle to make sense of his own existence. While the larger theme of his work explores what it’s like to be a Native American artist, his real search is the universal exploration of all serious artists. Namely, how do you make a picture that’s personal, yet is something others can relate to. With paintings ripe with double entendres such as You’re Invited to a War Party, which portrays Indians getting ready for battle — with colorful balloons attached to their steeds — Frank Buffalo Hyde seems to be inching closer to finding the answer.

David Bradley, a Minnesota Chippewa, who lives in the Santa Fe vicinity, has created a distinct body of work that also skirts the ’60s and Pop tradition. And like Romero and Buffalo Hyde, there’s always a touch of Indian symbolism thrown into the mix. What distinguishes Bradley’s work is his technique: a bit of magical Realism where every brushstroke is revealed upon close inspection. Yet, step back a few feet and your eyes blend together a seamless image, giving the subject a slightly surreal quality.

Sometimes the artist’s reference to Pop is obvious, such as the multi-image painting Hopi Girl and its debt to Andy Warhol. But where Bradley separates himself from the pack is with paintings such as Farewell Easy Rider (Dennis Hopper). Bradley paints the rebel in his counterculture regalia, outfitted in buckskin jacket, cowboy hat, shades and motorcycle, hovering like a ghost over the adobe church in Truchas — the one Georgia O’Keeffe made famous. But the viewer never loses touch with Bradley’s “shamanistic vibe.” If you look closely at the Hopper portrait, there’s a slightly hallucinatory arid landscape that recalls the peyote-induced experiences of Carlos Castaneda, author of the classic ’60s tome The Teachings of Don Juan: A Yaqui Way of Knowledge.

Coming full circle to Fritz Scholder’s work, Bradley’s pictures offer a full frontal assault on how Indians are perceived. In a painting called Half Breed, the artist literally splits a portrait down the middle. To the left, is a stereotypical “red man,” decked out in a war bonnet, with a teepee in the near distance. His blue-eyed “white man” counterpart wears a Stetson, with a wood-frame suburban-style home behind him. What makes this painting and others by Bradley so effective is that when you view his work, you feel his presence in the room.

David Bradley is an artist who continually questions his identity. And just as Scholder discovered, there is no easy answer. Whether you’re Diego Romero, Frank Buffalo Hyde or myriad other Native American artists, you realize there is no escape from the two worlds you straddle. The lesson you take away from these painters’ works, and their predecessors, which include T.C. Canon and Jaune Quick-to-See-Smith, is that regardless of where an artist is coming from, all that matters is where the work ends up. 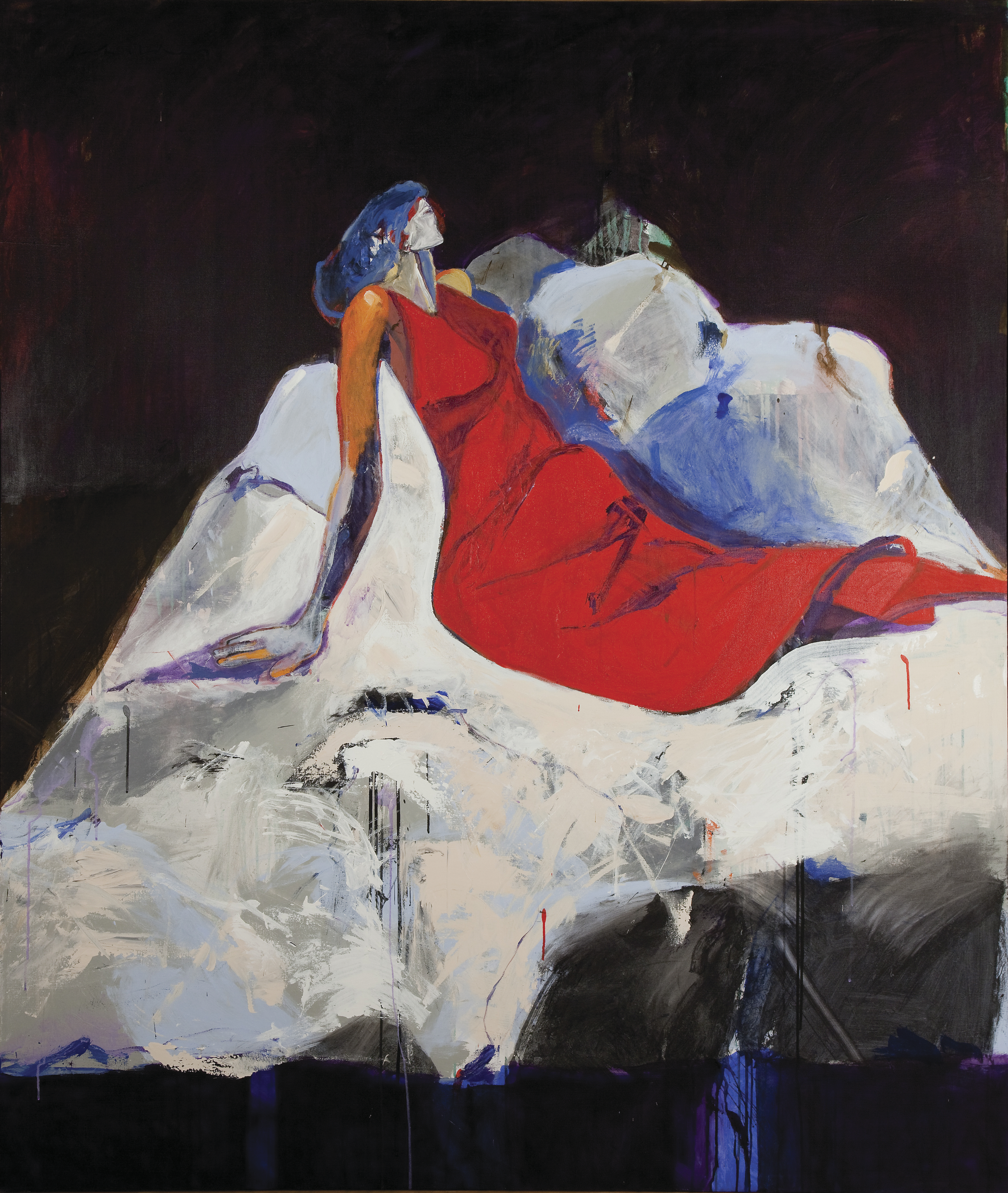 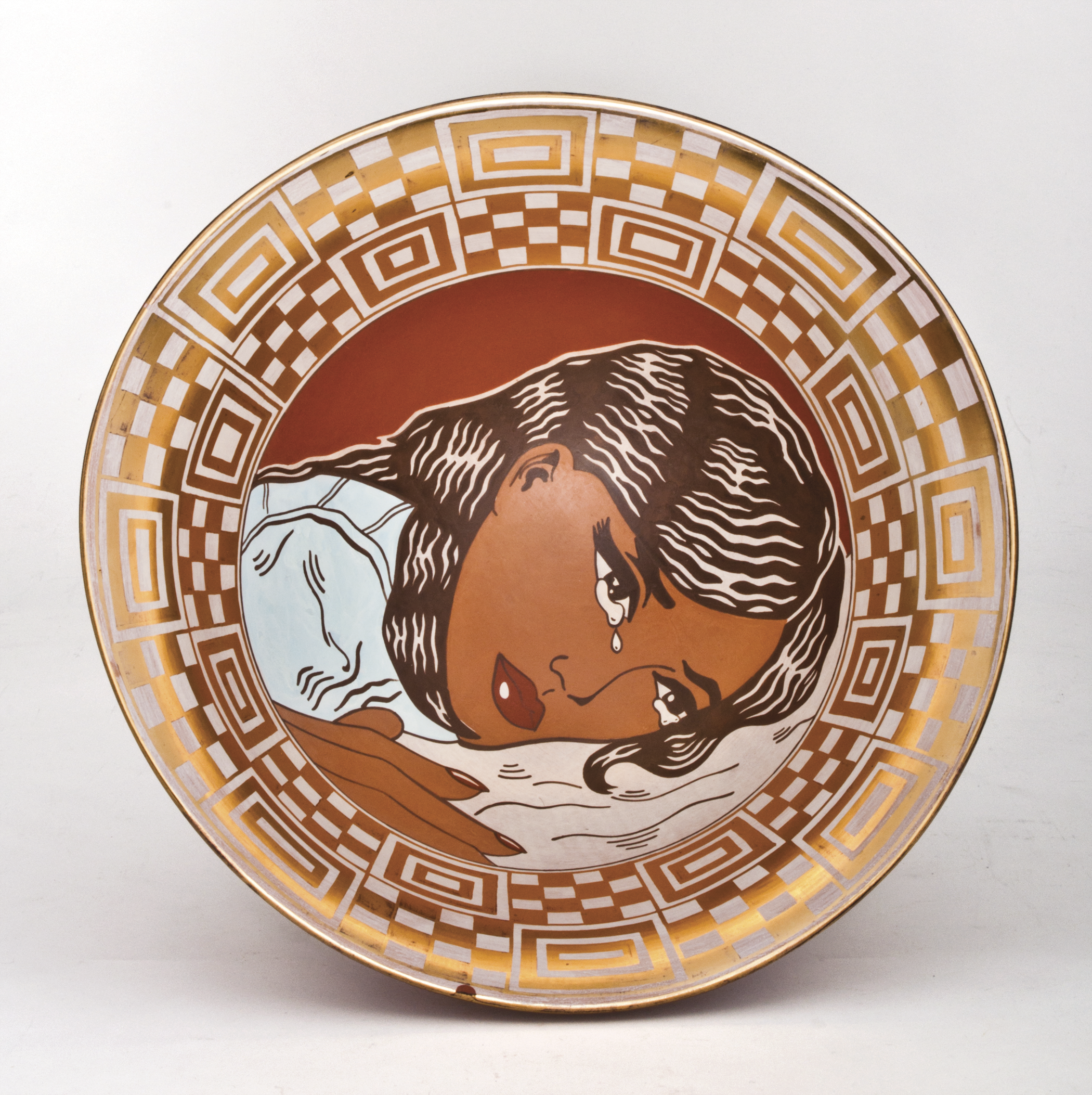 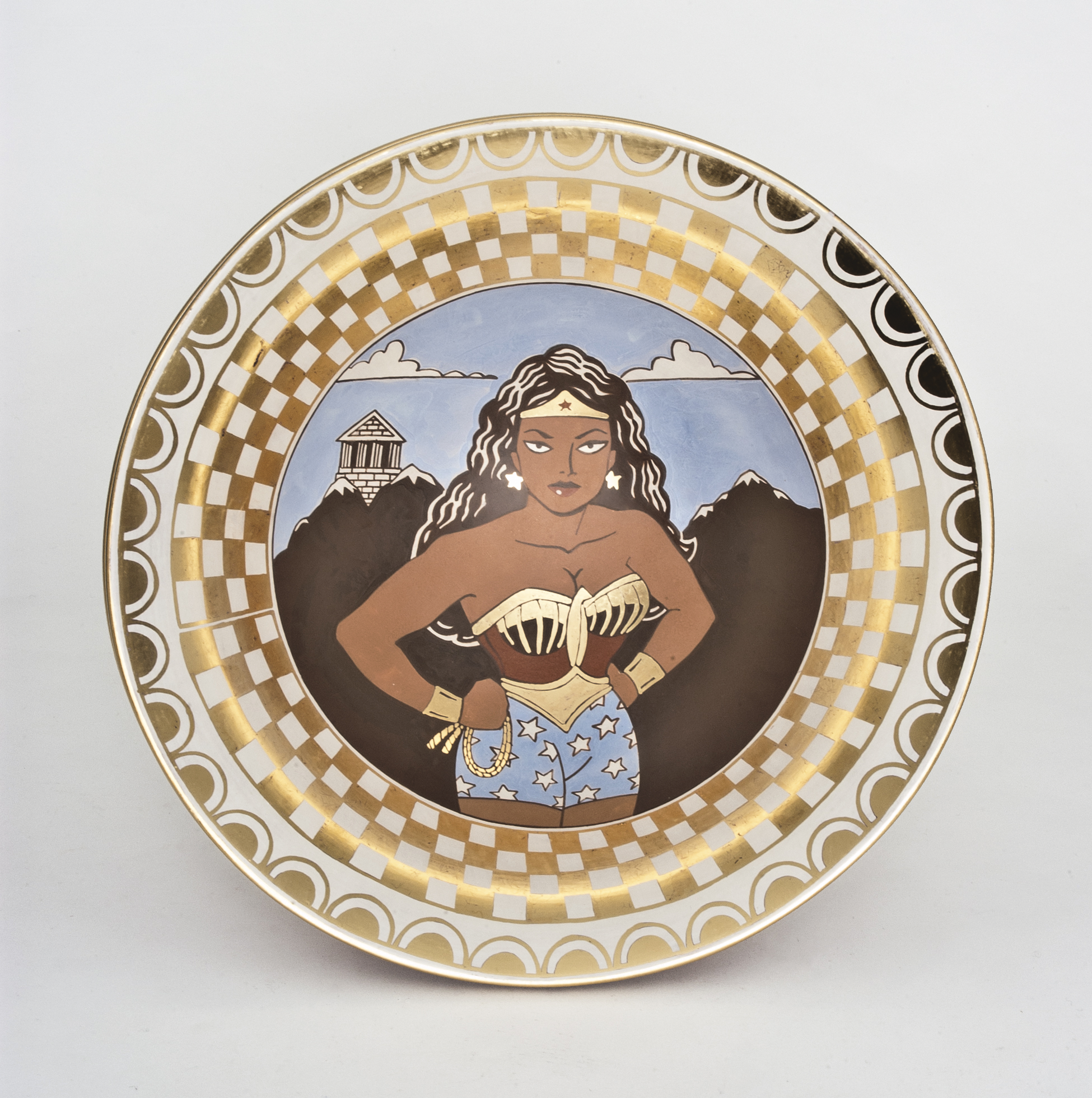 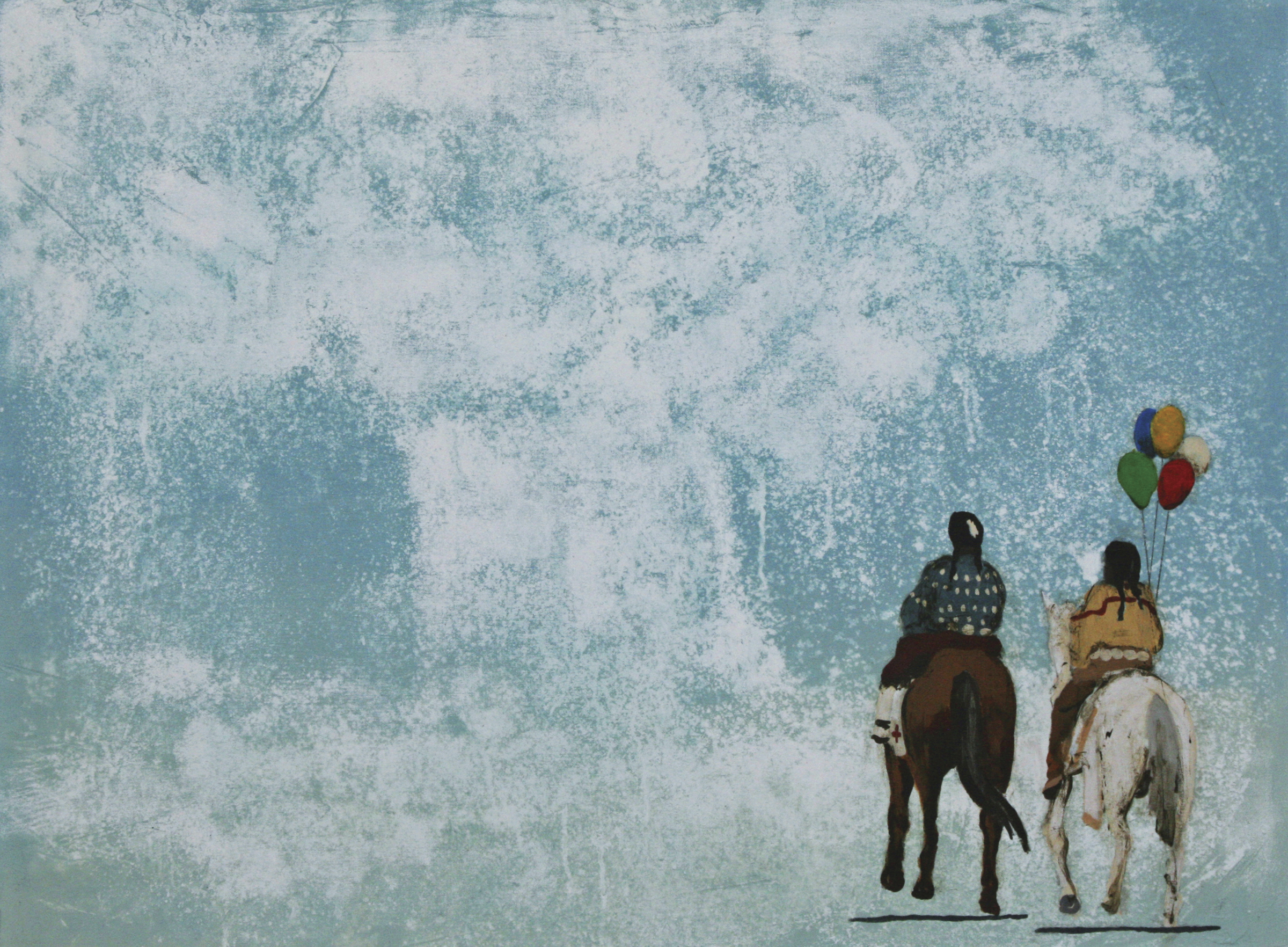 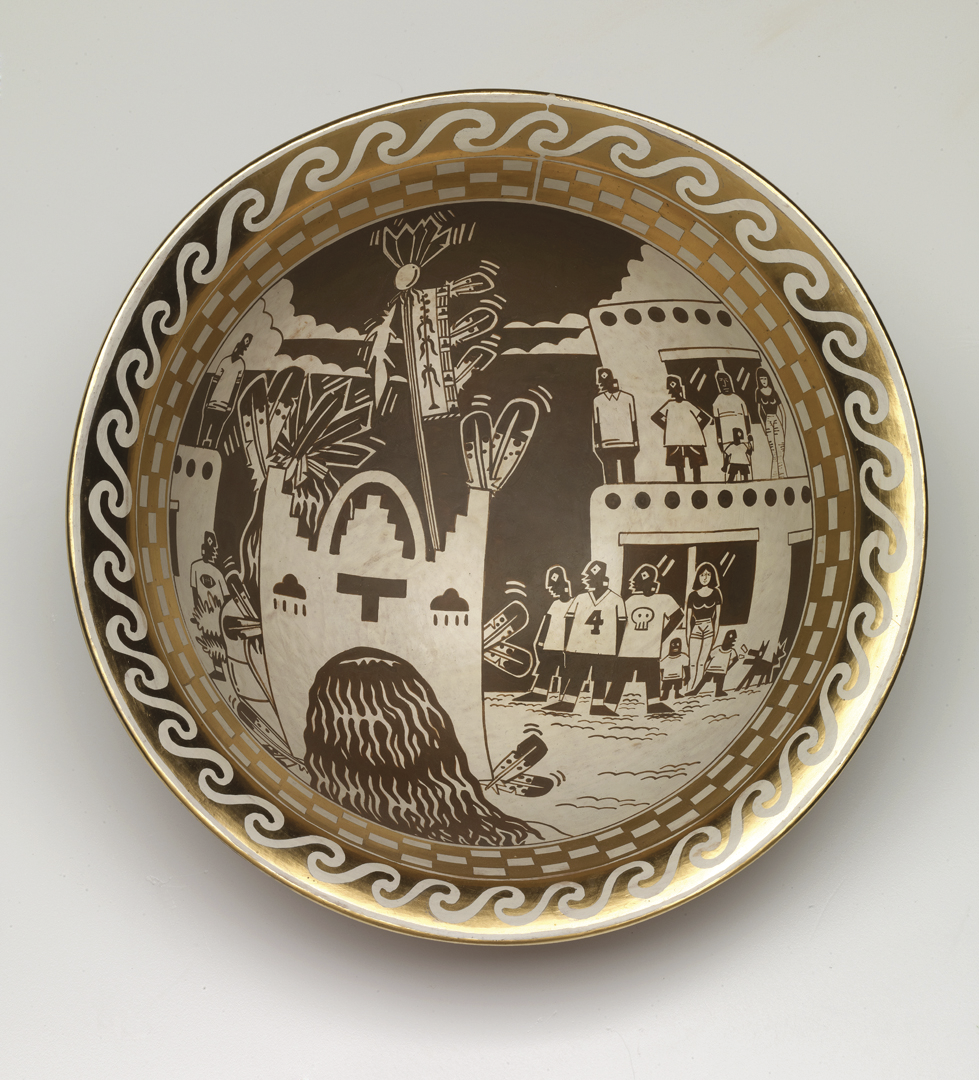 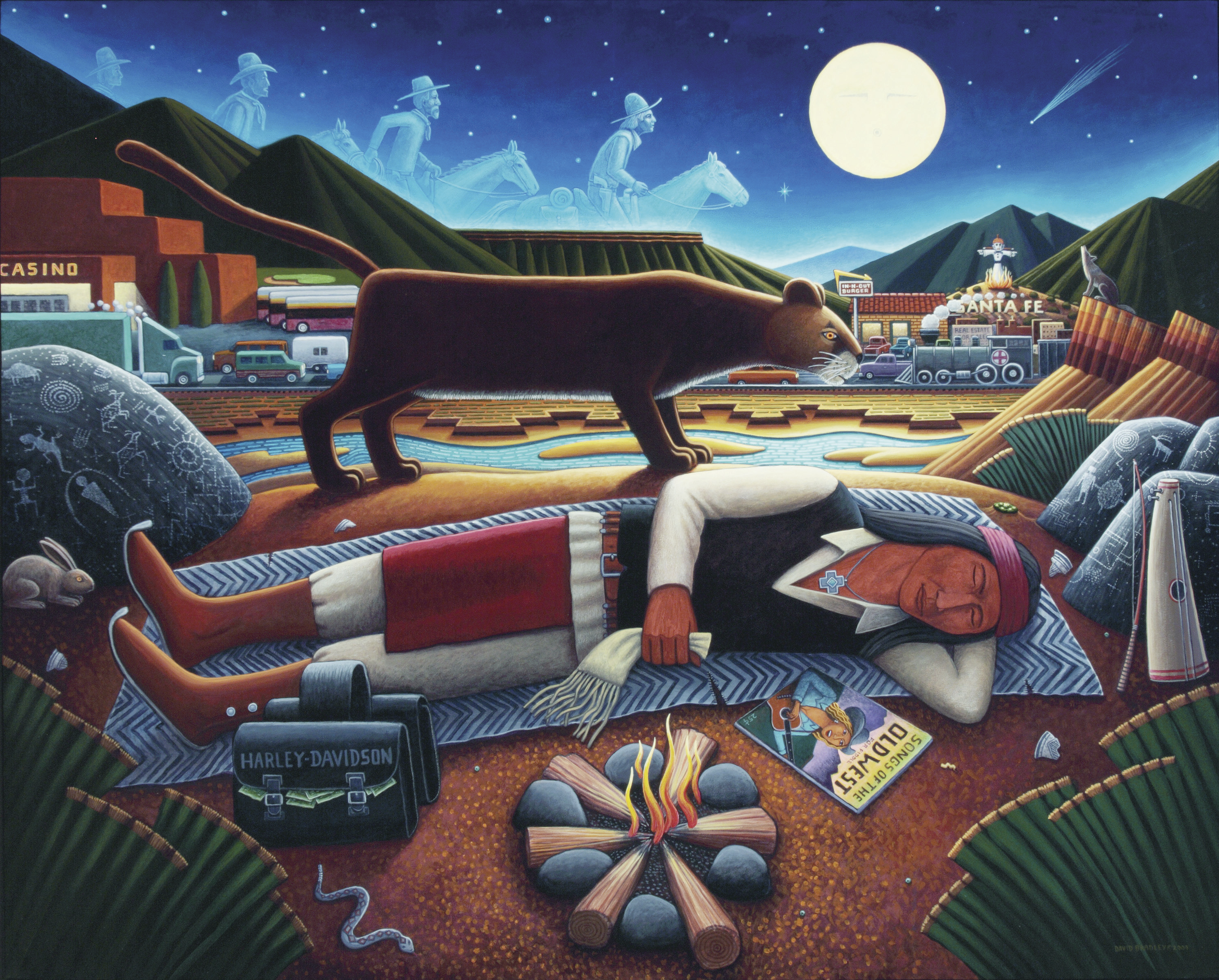 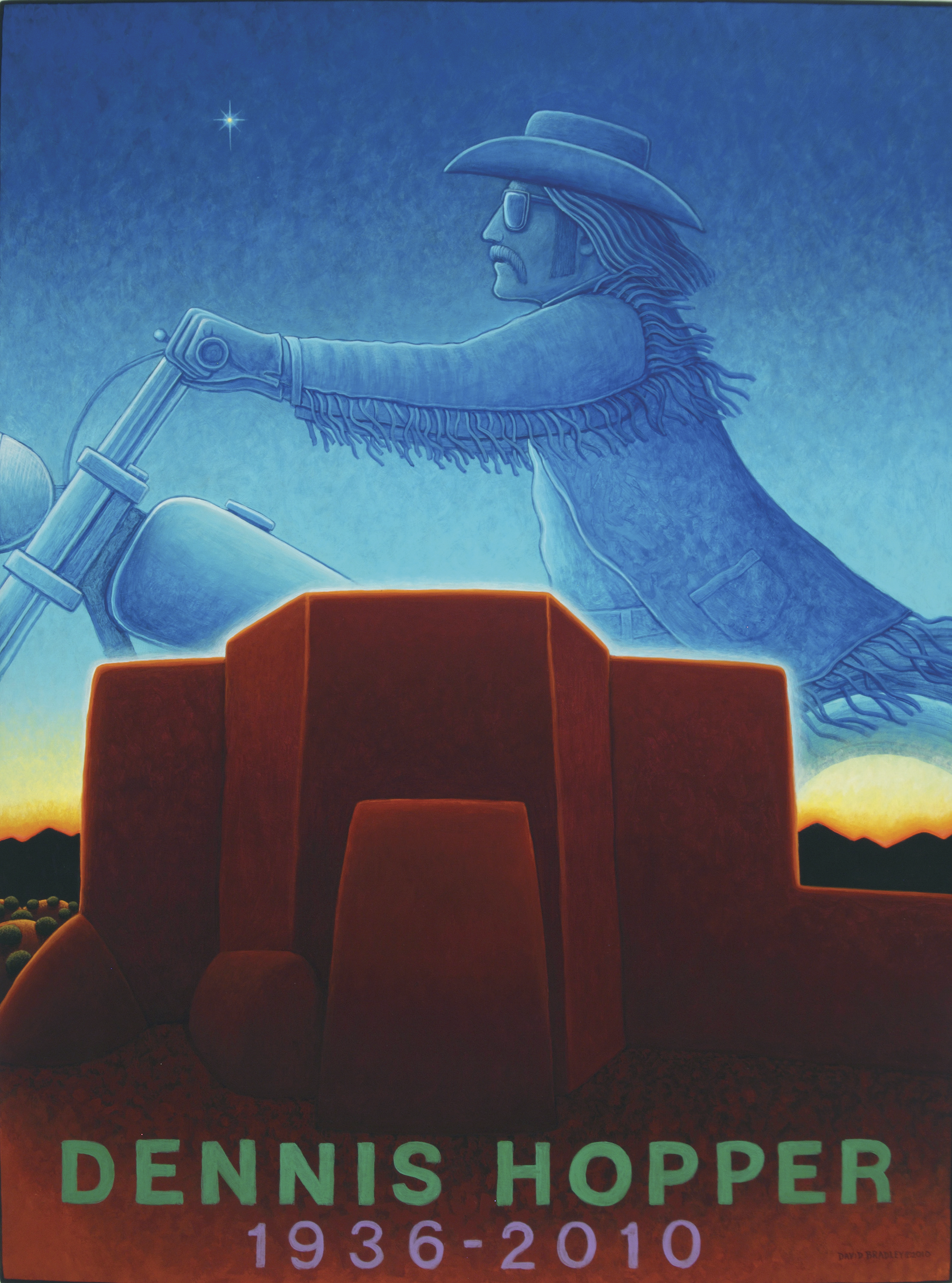 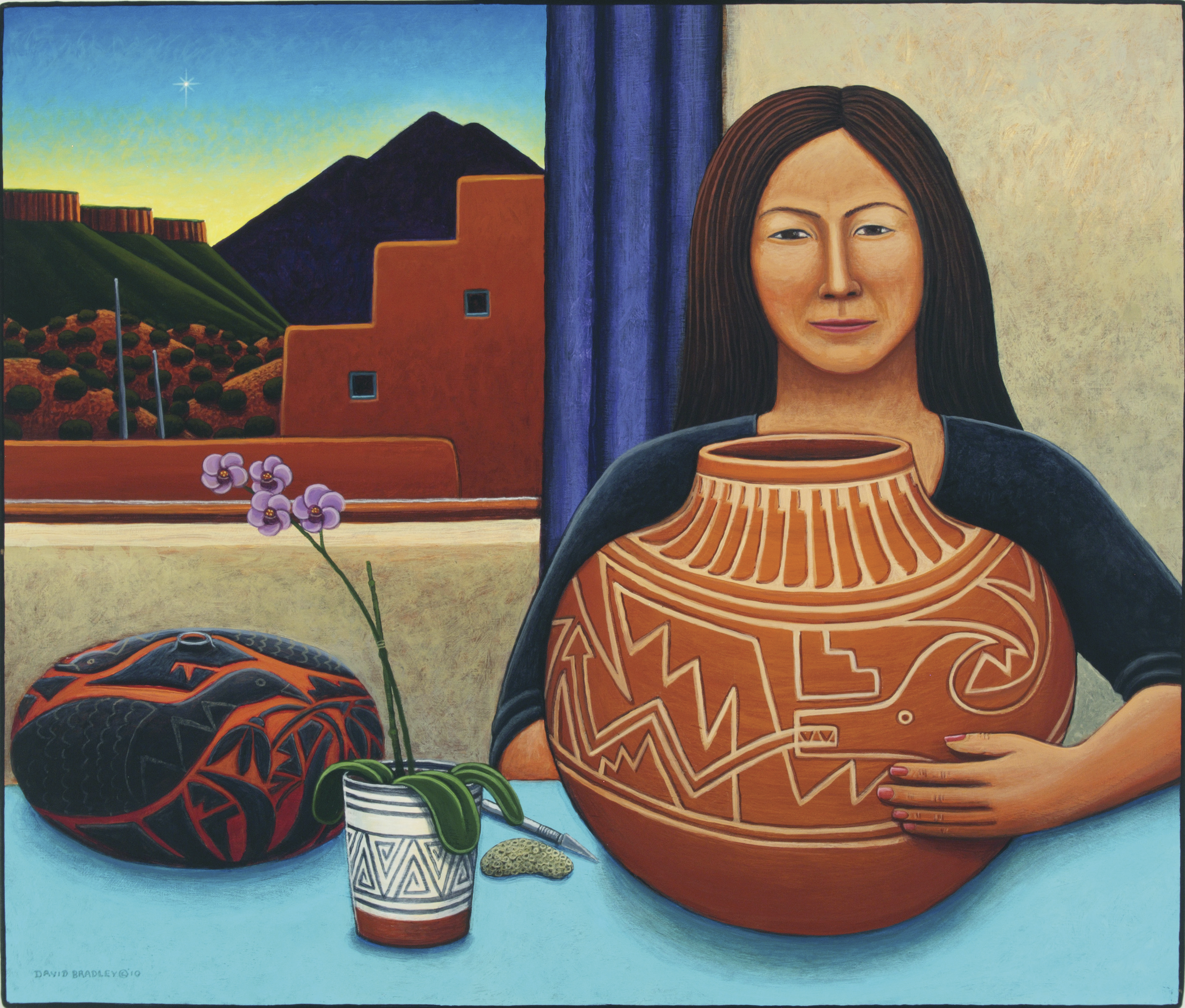