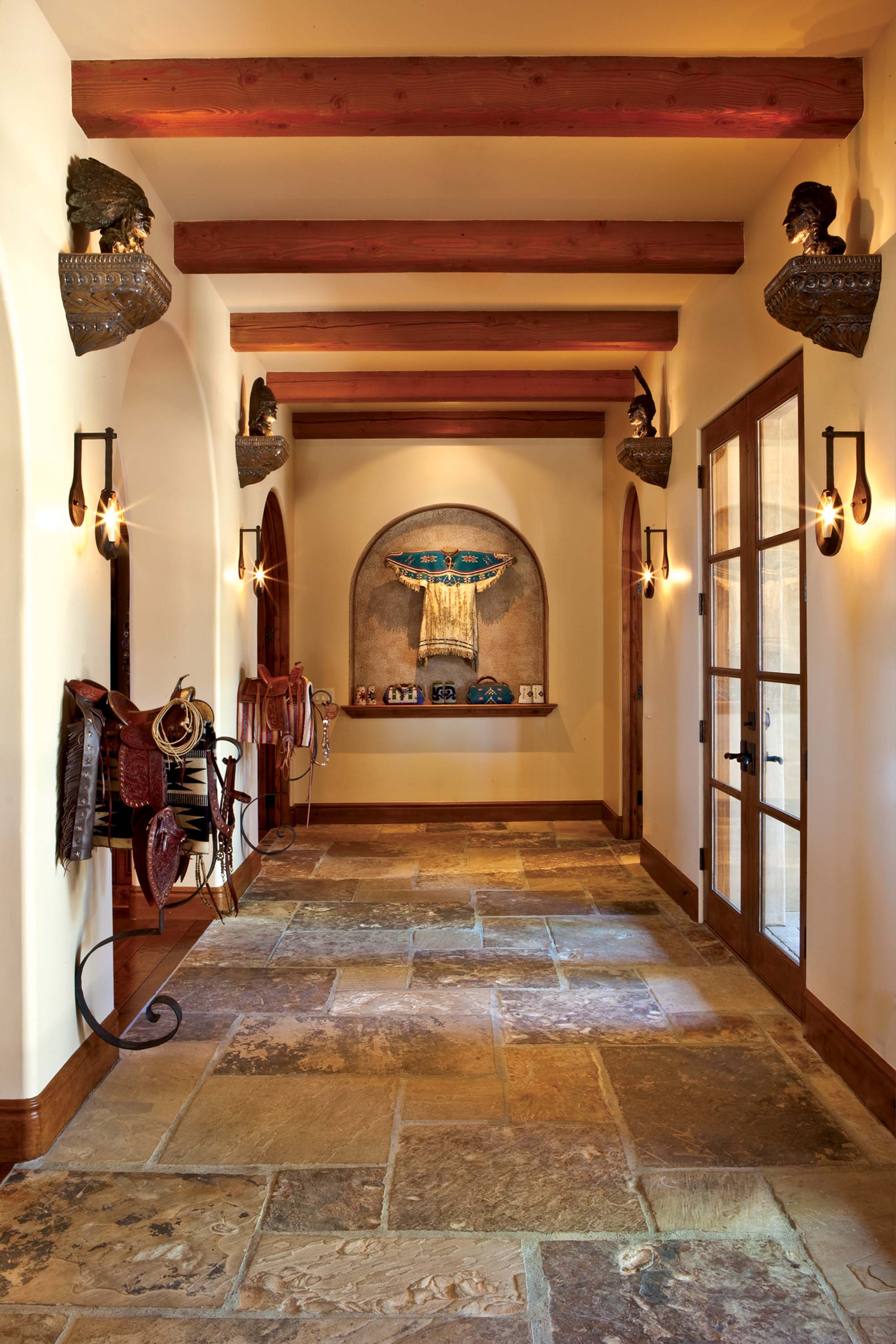 MOST SPANISH-MEXICAN STYLE HOMES ARE ENTERED through a courtyard and Los Arcos, Bob and Lora Sandroni’s Santaluz residence, is no exception. Dark, earth-colored stucco walls, a gurgling fountain and antique wrought-iron cande-labra signal something quieter and more authentic than what is usually encountered in the sun-drenched hills around San Diego.

At the back of the courtyard, glass-paned doors lead to a sunny hallway, a gallery of sorts, where four intricately carved leather saddles are displayed like living art against the wall. At the far end of the hallway, an 1880s-era turquoise-and-tan beaded Lakota Sioux child’s dress is showcased in a niche –– a treasure from a disappearing culture and abandoned time. Bob Sandroni never passes the dress without appreciating its craftsmanship and legacy.

In fact, most walls and nooks in Los Arcos showcase some American Indian artifact, painting or drawing; if not American Indian, then Mexican-American or cowboy — Roy Rogers’ favorite chaps and Edward H. Bohlin’s (saddlemaker to the stars) personal gun belt are two examples. Beaded vests and gauntlets, dozens of antique, intricately carved Mexican silver spurs, saddles adorned with cactus fiber and exquisite portraits by artists such as Z. S. Liang, John Fawcett and Roseta Santiago. All of it collected over the course of two decades and displayed with an eye for narrative and balance. Nothing is crowded or haphazardly set. Every piece has space to shine in a house that is first and foremost a home.

It was misfortune that brought Los Arcos into the Sandronis’ lives. On October 21, 2007, their longtime weekend home in Lake Arrowhead –– which they had spent years remodeling to accommodate Bob’s collections –– burned to the ground in the Grass Valley fire. Everything in the home was lost, including the majority of Bob’s art and artifacts. More than 1,700 antique and historic guns, 100 salesmen saddles (miniature saddles used as models), gun belts, paintings and more. Some items were kept in Bob’s Los Angeles office and at their second home in Santa Fe, New Mexico. But most of it was gone.

“In October the house burned down, in November I retired and in December the dog died. … It was not a good quarter,” recalls Bob. Lora opted not to even return to the lot afterwards. She remembers thinking, “In the next couple of years, we’re going to have to get it together and move forward and start a new life.”

Bob decided to keep collecting, but with a new focus. “No more saddles, no more gun belts,” he says. “I [decided I’d do] only Native American bead work and Mexican spurs when I can find the right ones at the right price.” Today, his collection of over 100 Native American beaded gauntlets is world-class and museum-quality. A portion of it will be included in a 2014 exhibit “Floral Journey: Native North American Beadwork” at the Autry National Center in Los Angeles.

With a daughter and grandchildren already living in San Diego, and a partiality for the area, the Sandronis began looking at homes nearby. Foremost in their minds was a house that could showcase their art. They found the 7,000-square- foot, four-bedroom Los Arcos within a year.

“There was a charm, a flow, a softness about this house,” says Lora. Even though there were a lot of arches and details, it felt like it could be warm.”

Once relocated, they called interior designer Kris Lajeskie, of Kris Lajeskie Design Group. Having proven herself a master at arranging art collections in the homes of private clients –– including her work on the Sandronis’ Santa Fe residence –– the couple didn’t hesitate to tap her again.

“My job is to create an environment that supports and presents their collection. Collectors want to live and see and be with their art,” says Lajeskie, who has offices in Santa Fe, New York and Los Angeles. Still, when she began working with the Sandronis in Santa Fe eight years ago, Bob had misgivings. Until that point, he’d been the one hanging and displaying his collectibles — particularly at Lake Arrowhead.

“I thought I did a great job, but it was crammed,” he says. “This house, and the way she designed it and put the art, really looks better … whereas if it were me, I’d have five more pieces of art in this room.”

When beginning a project, Lajeskie walks the house with the client, discussing the budget and what needs to be done. Then she creates an outline of the scope of the work. Six months later, she says, ‘Okay, when are you going to be out of town?’ That’s when she comes in and completely transforms the place.

“We walked in and we just burst into tears, because it was our dream,” says Lora.

The biggest surprise was likely the Z. S. Liang commissioned painting, Lakota Warrior, Little Bighorn hanging over the living room mantle. The image of an American Indian riding from the Battle of the Little Bighorn holding the 7th Cavalry guidon uses light to portray the drama and a sense of the warrior’s courage. Bob had commissioned a Liang painting for just that spot, but was told it wouldn’t be ready for a year. Lajeskie knew John Geraghty, an Autry National Center trustee and renowned collector himself. Together they facilitated the completion of the painting on time. “I said to John, ‘It’s got to be ready in three months,” Lajeskie recalls. “You have to be a master coordinator to make everything come together all at once.”

Attached to the entry wall, Bob’s salesmen saddles rest on custom wrought-iron stands. Les Michel, master metalsmith, also took Lajeskie’s designs and crafted sconces. The house already had a series of built-in niches, but Lajeskie tapped a Venetian plaster craftsman to give each one a distinctive finish, highlighting the item that’s displayed in it.

Fortunately for the Sandronis, the house itself didn’t require much work. They upgraded the lighting for the art and added their own favorite wall colors. But the wood floors and the bathrooms — with their intricate tile patterns in earth colors — were already stunning.

Bob’s interest in American Indian artifacts and culture began as youngster, when the only interesting shows on television were cowboys and Indian adventures. Later, someone gave him Ruth Beebe Hill’s novel Hanta Yo, which revealed the American Indian culture in a rich, three-dimensional manner. Sandroni’s passion for the culture and people only deepened. “I began to see the American Indian as a complex, whole person. They were beautiful people inside. They loved their families, they protected their property and they pur- sued a spiritual path.”

For Bob, collecting became more than passion. “It became an obsession, but I so appreciate the people and the stories these pieces tell.”

With the guidance and vetting from the couple’s good friends, Jim and Linda Sherwood of High Noon Collectibles, Bob spends roughly 40 percent of his time collecting (including extensive research), and Lajeskie, who the couple considers part of the family, continues to help them place and display each acquisition.

“I trust her. I mean I know she’s right,” says Bob, chuckling. ”Sometimes we get into arguments. Like, if I go down to Santa Fe, and that picture was there when I left, when I get back, it will be over there, ’cause that’s where she wants it. I gave up fussing with her. So I just do it my way and she does it her way, and we get along fine.”

Lajeskie chuckles at Bob’s description of their routine.

“In order to introduce a new piece, you have to be courteous to its neighbor. You really have to curate it, which means you have to understand the story you’re telling.” That being said, she adds, “It’s his house, so he can do whatever he wants. I’m just always looking out for him … ” 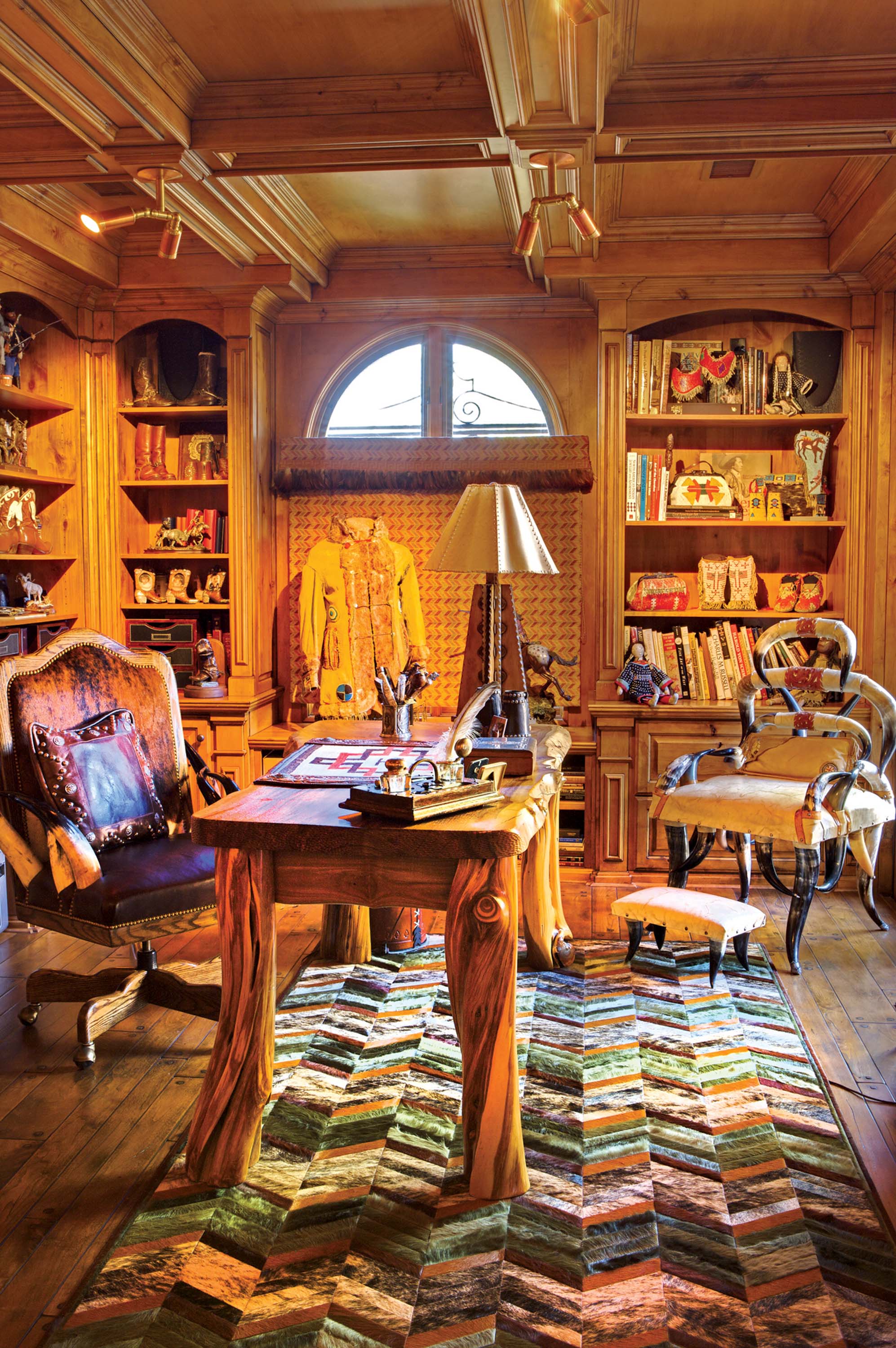 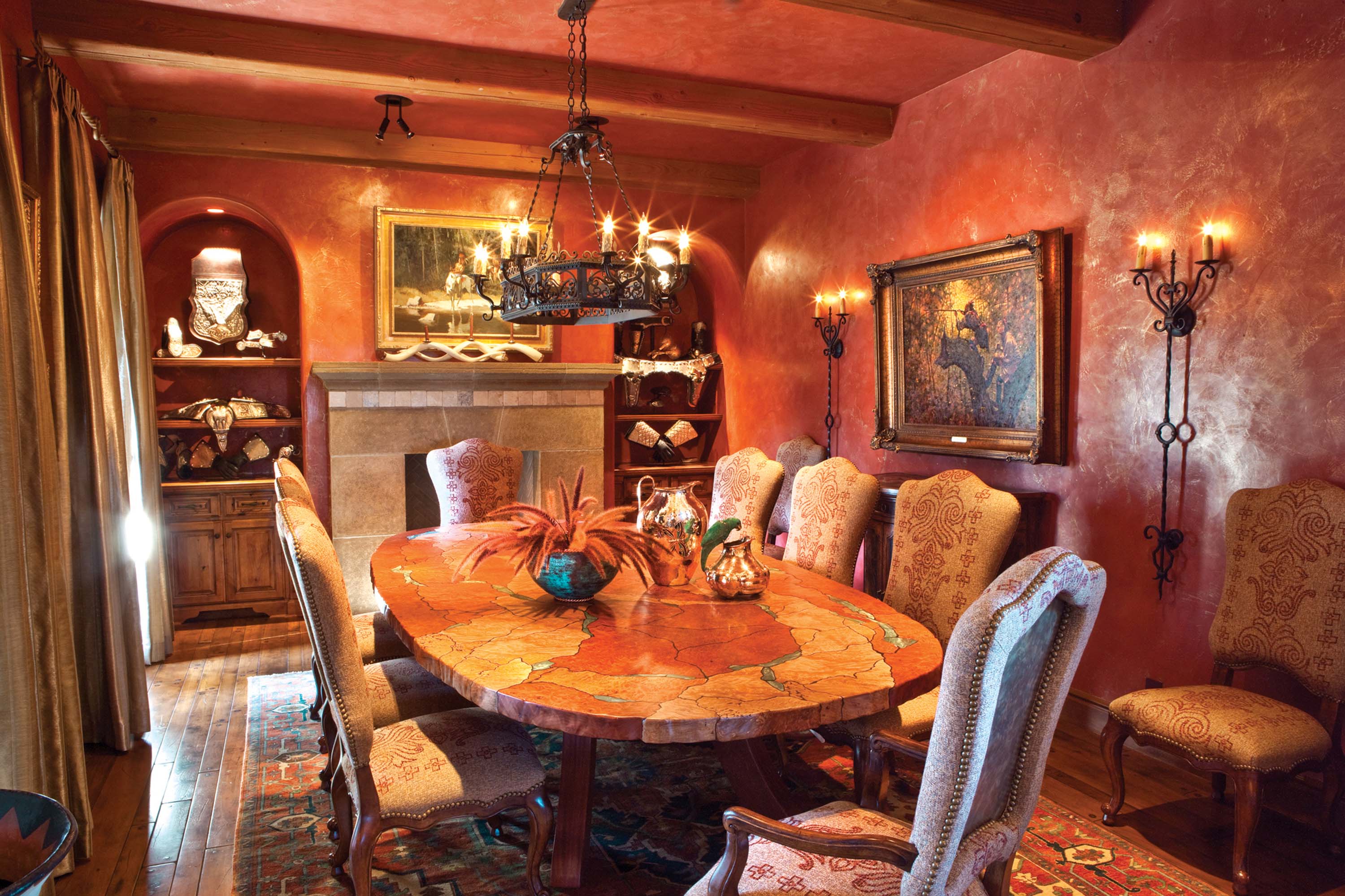 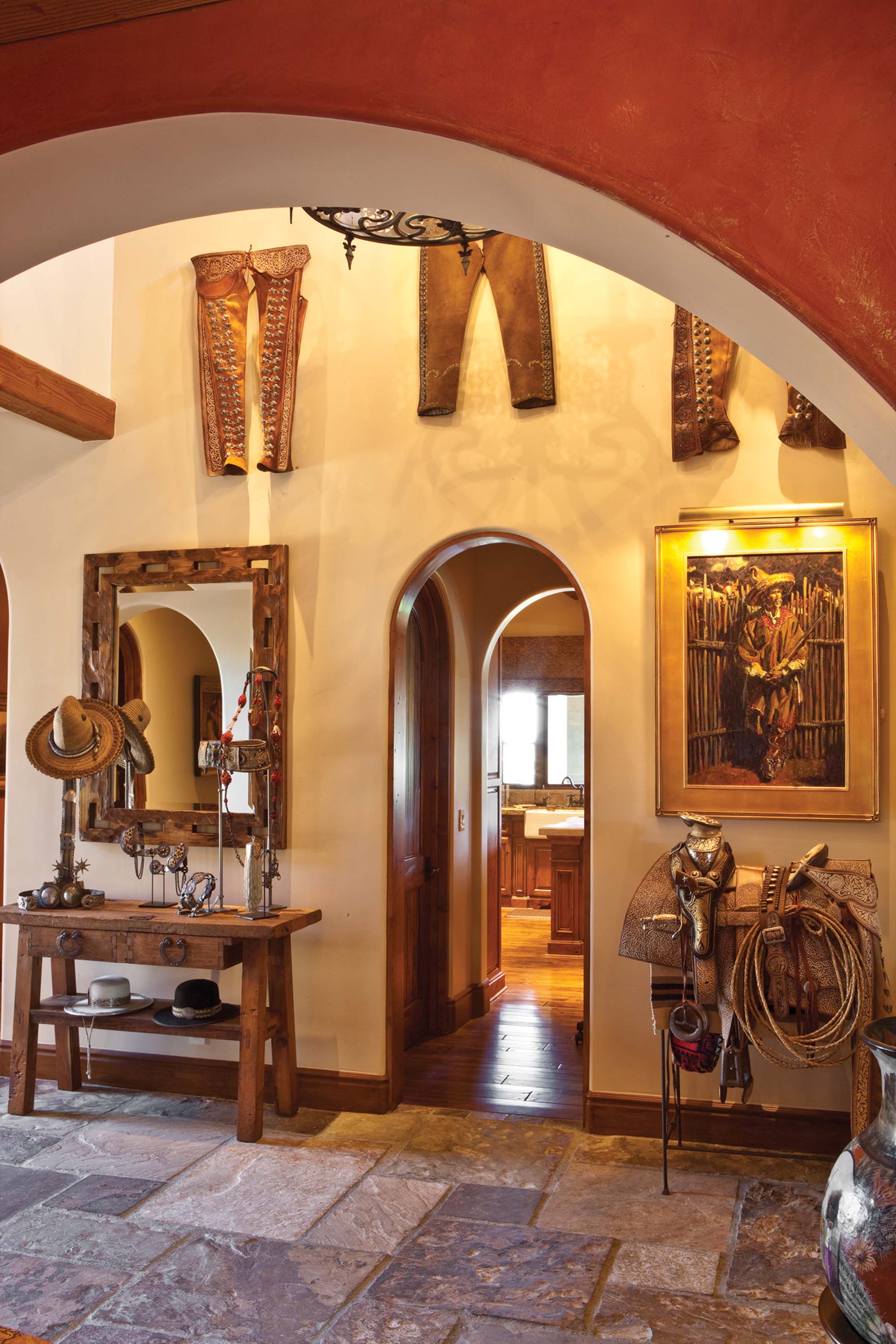 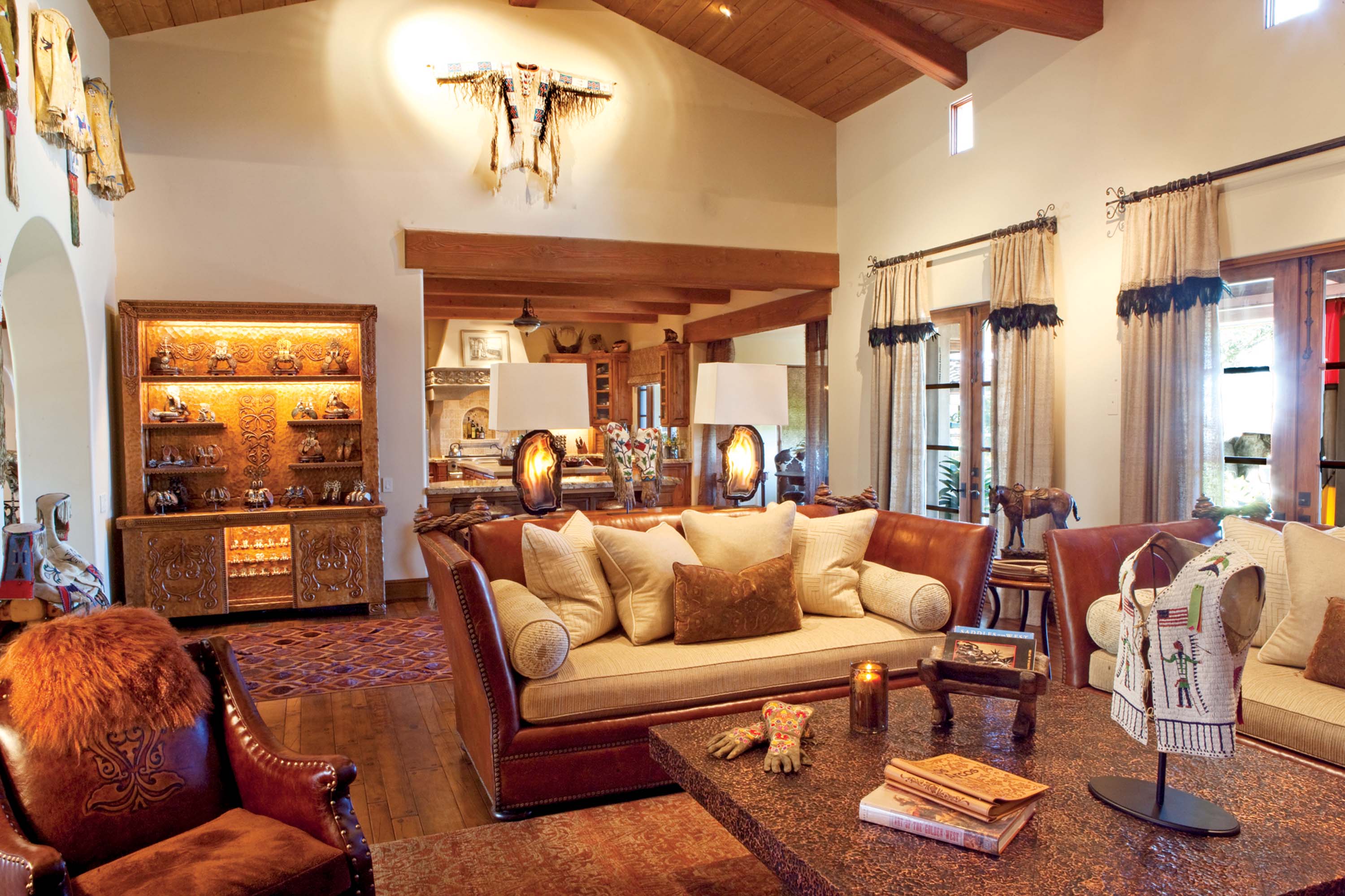 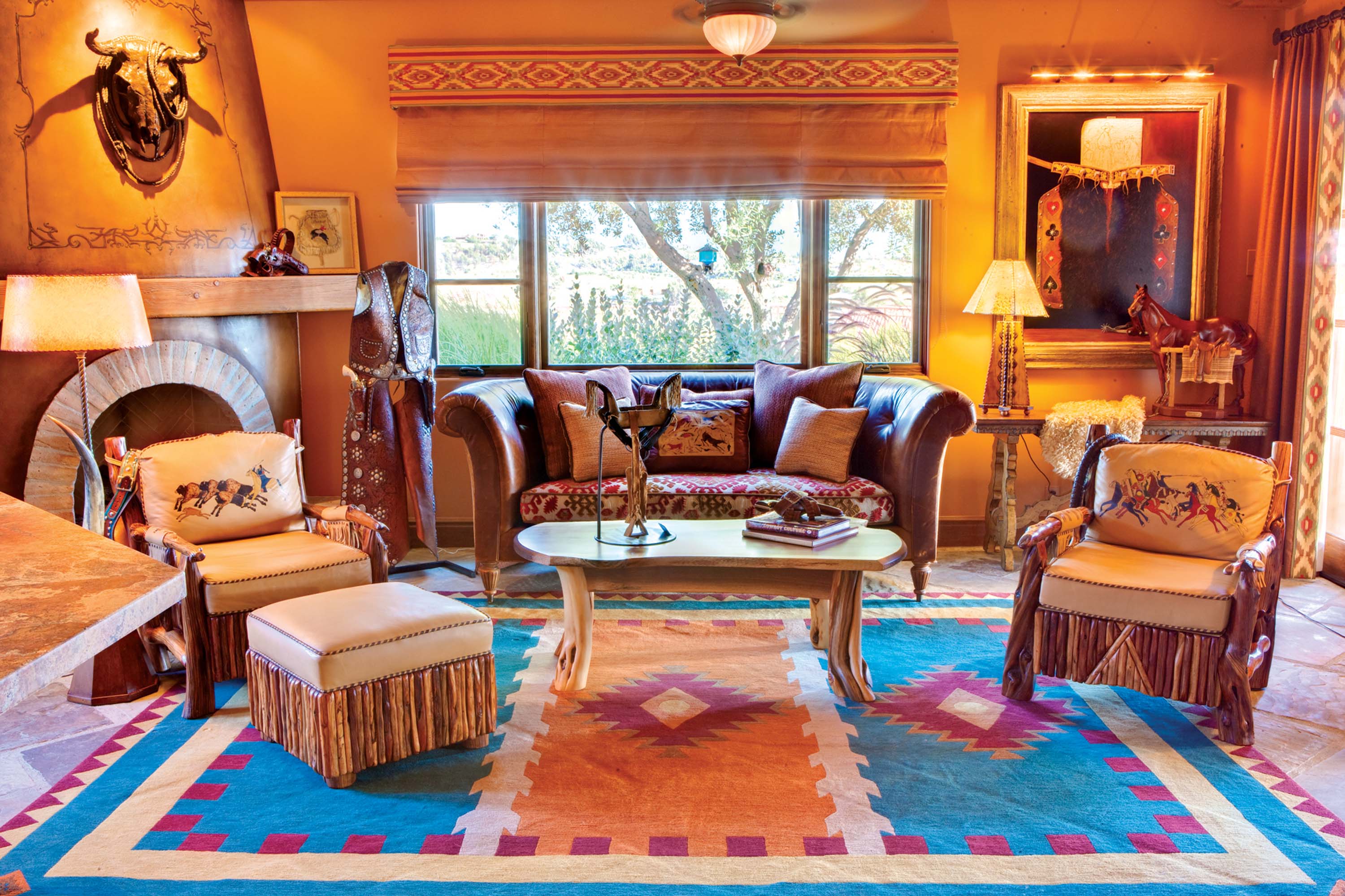 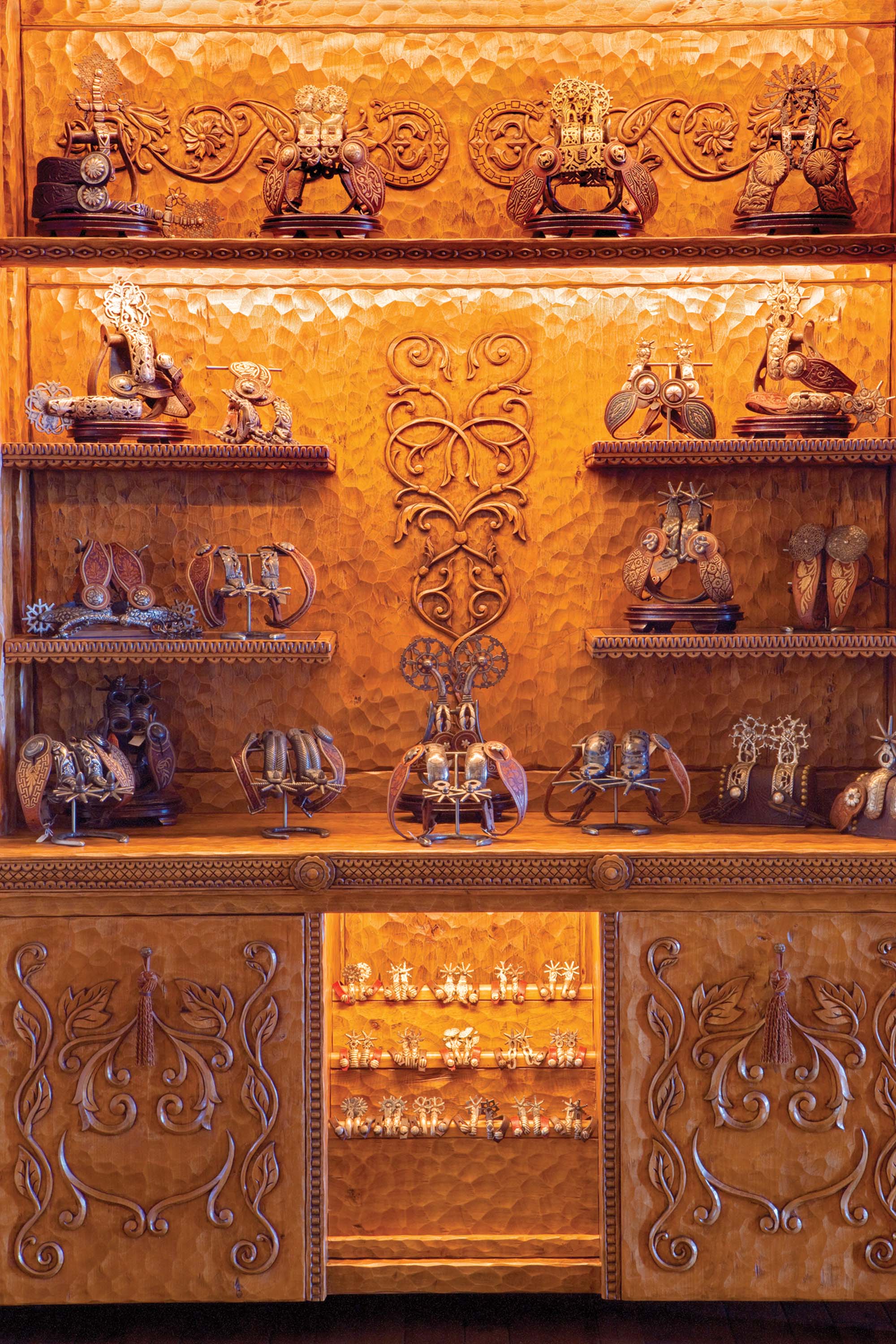 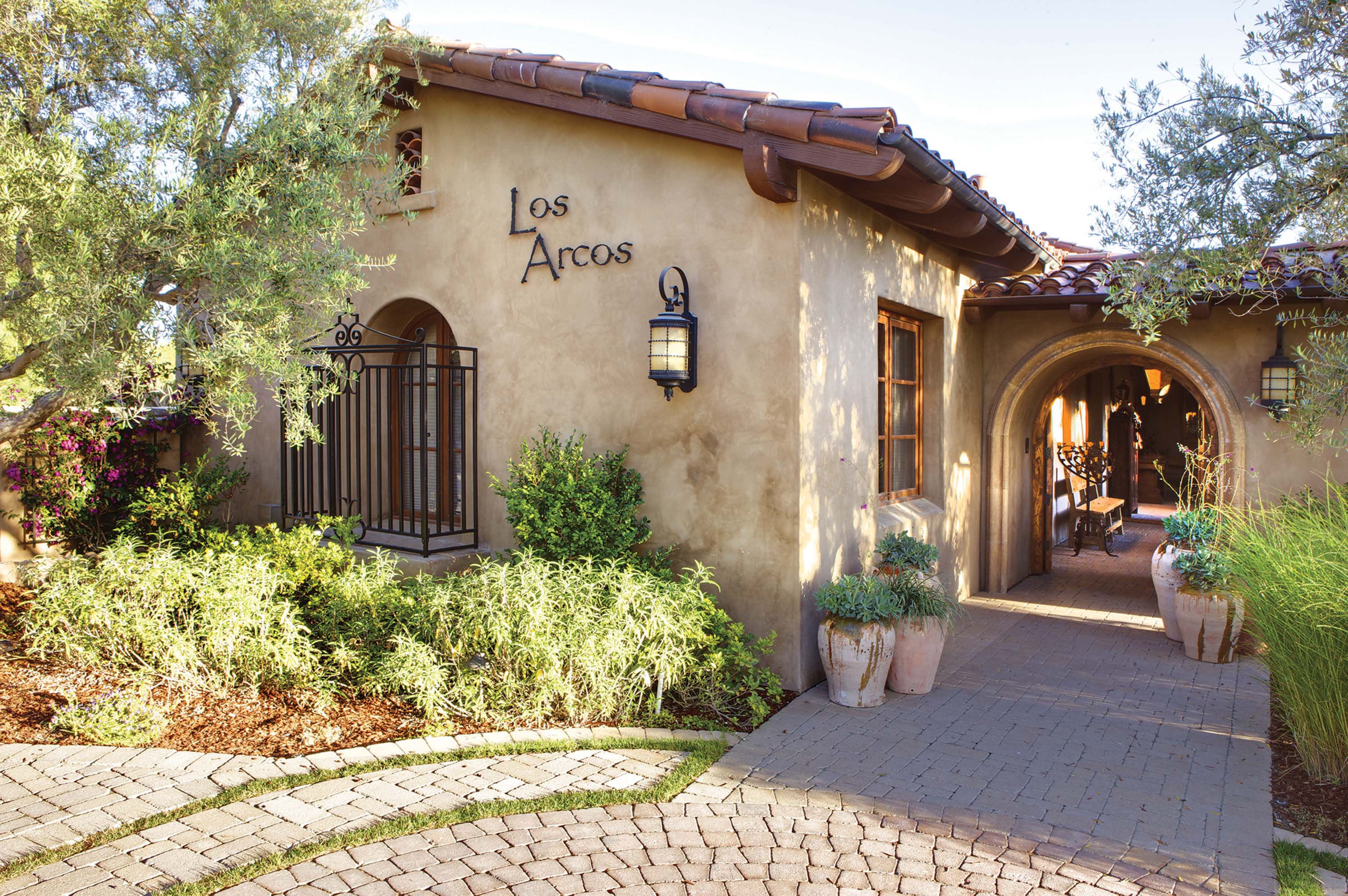 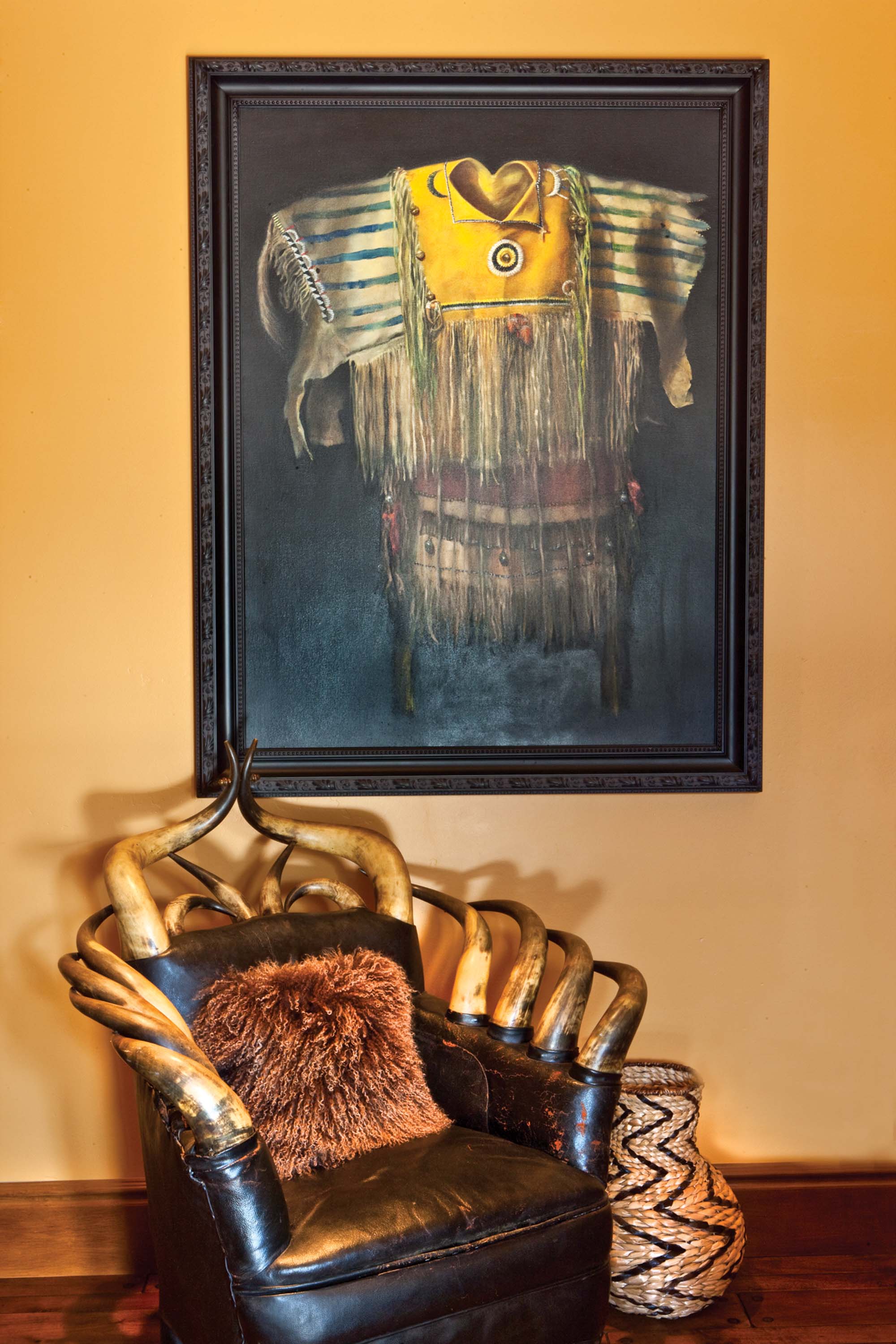 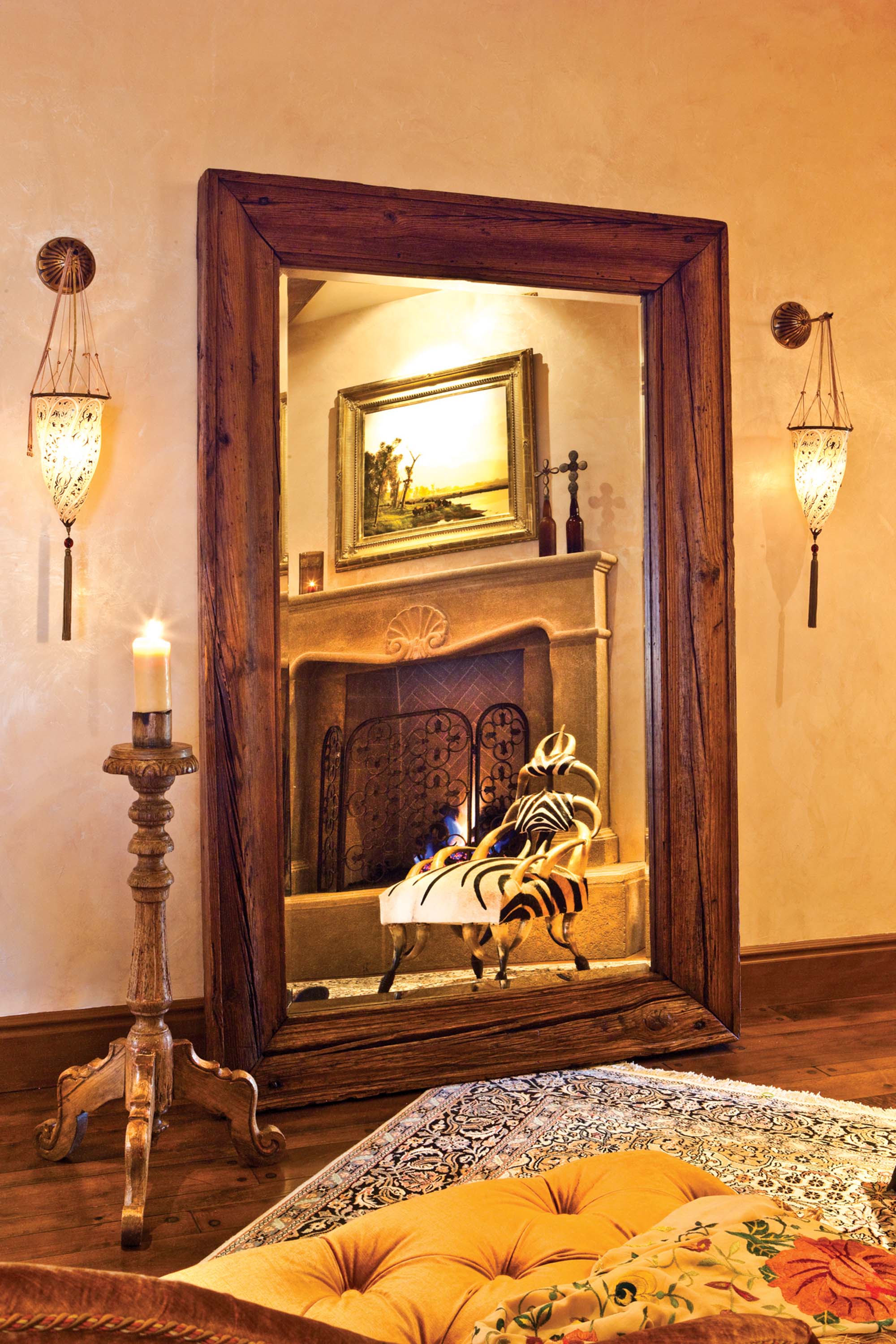 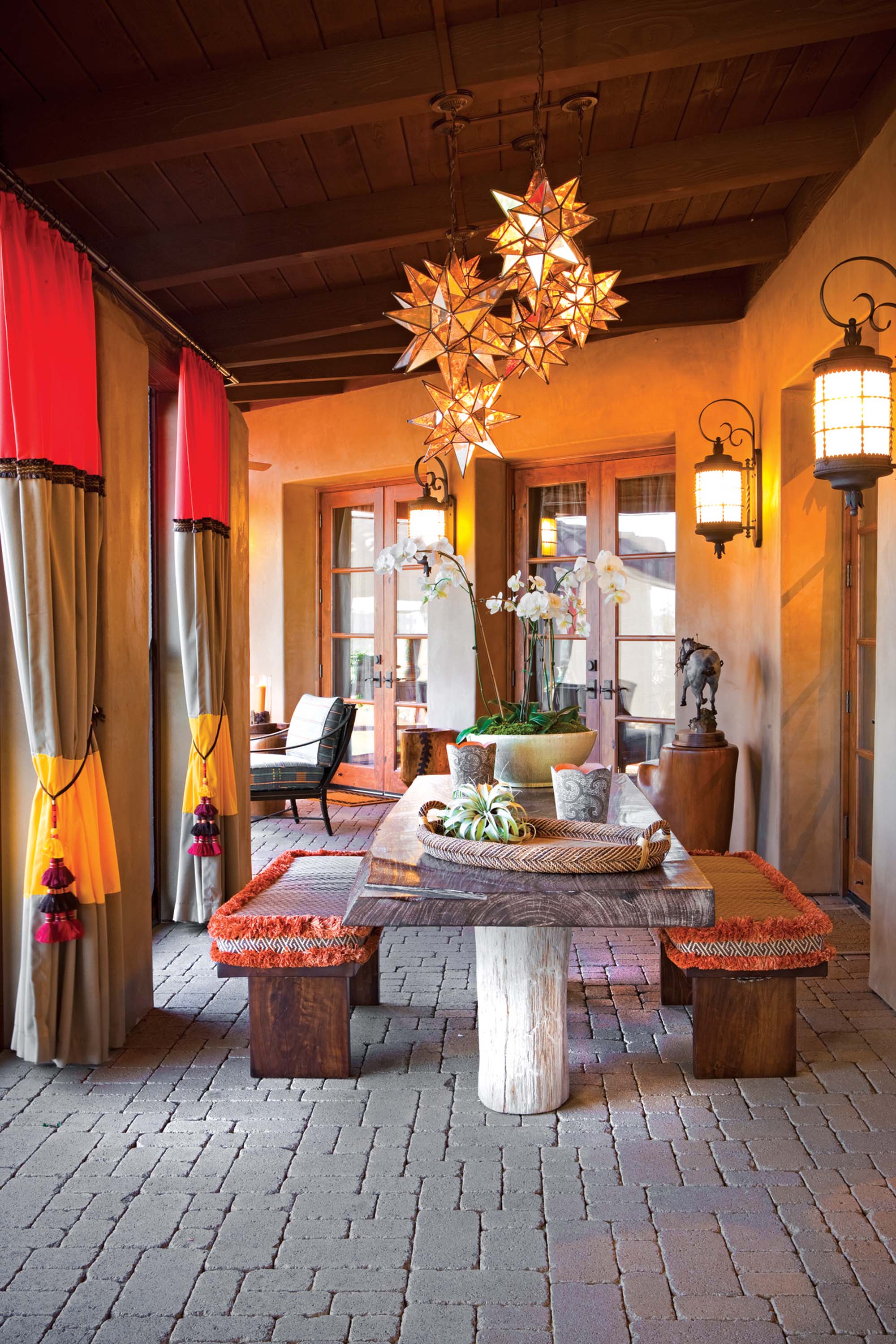