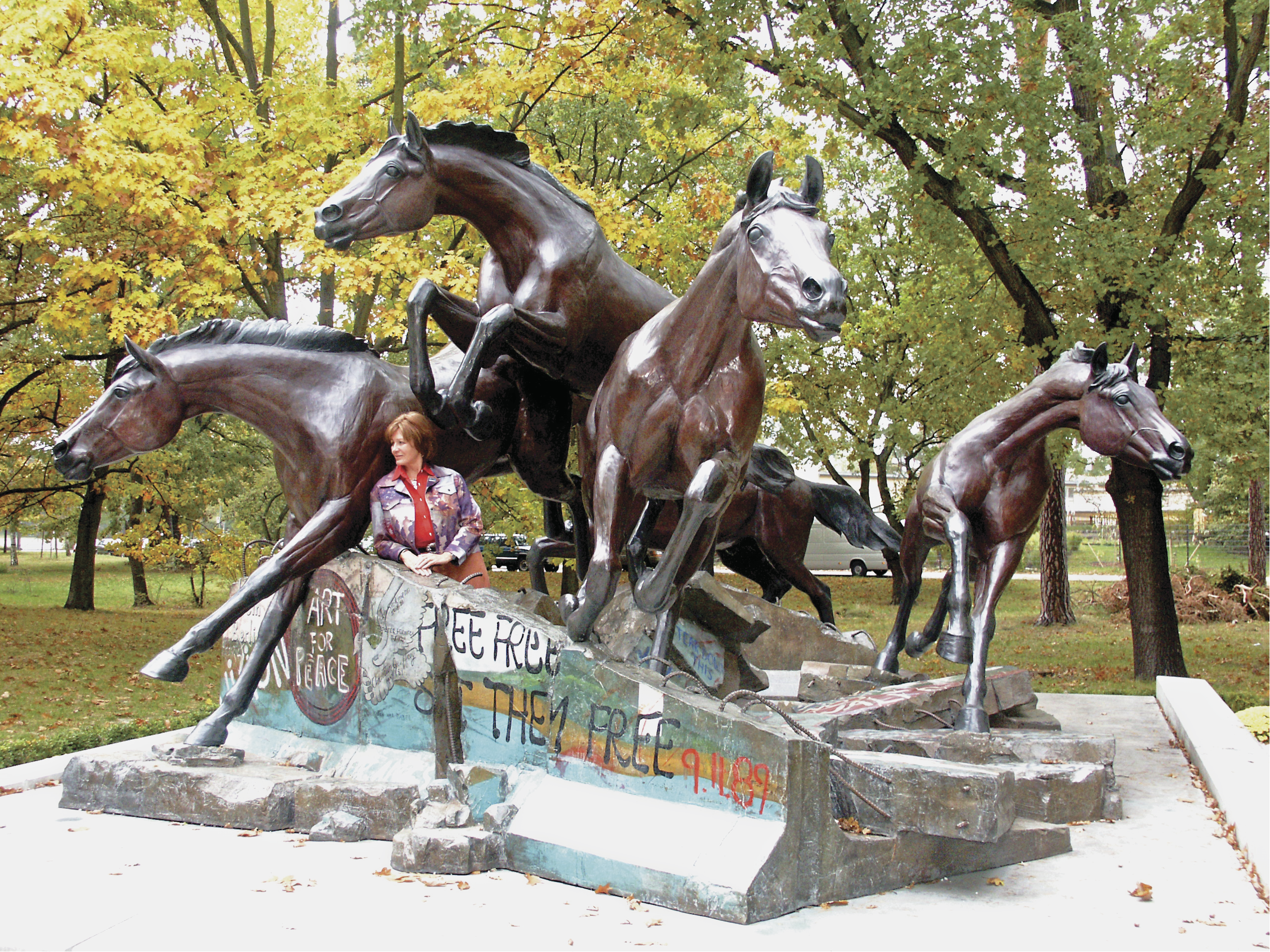 30 May No Looking Back

THE VENERABLE THOMAS GILCREASE MUSEUM IN TULSA, OKLAHOMA, is celebrating the life’s work of artist Veryl Goodnight with a 40-year retrospective, entitled Rendezvous, Artists’ Retrospective Exhibition and Art Sale. Opening April 14 and continuing through July 20, Goodnight will share the spotlight with Impressionist painter Curt Walters, as the Gilcrease continues the tradition of honoring a painter and sculptor.

The tradition of the artists’ Rendezvous at the Gilcrease began in 1980 and has, over the years, included the most well-known and respected artists in the field of Western art. Of their choice to honor Goodnight, chief curator Bob Pickering is decidedly matter-of-fact. “Rendezvous has attracted the best of Western artists. The museum keeps their eye on artists who have the best reputations and following, and who are doing their best work. Veryl is someone we have been watching and the time was right to invite her for Rendezvous.”

Only the 11th woman in the 31-year history of the Rendezvous to be honored, Goodnight is in excellent company. Glenna Goodacre was the first female honoree in 1982, followed by Bettina Steinke in 1987.

Concurrently, the release of a book, No Looking Back, chronicles the story of this extraordinary artist and her pursuit of a life with art and animals, both at the very heart of her being. As far back as she can remember, Goodnight’s passion for animals and her keen desire to understand their relationship to humans has been all-consuming. From her childhood love of horses, her fascination with animals expanded over time to include all manner of wildlife and domestic animals. And for Goodnight, the creatures she loves and the art she creates are inextricably entwined. “There’s no time I am ever happier than when I am in the great outdoors with my dogs or horses, and I am working on my art,” she says.

Although art came naturally to Goodnight even in childhood — she was consistently recognized as the “class artist” from first grade through high school — when Goodnight qualified for a scholarship to college to study art, she turned it down.

Abstract Expressionism was the rage at the universities in the 1970s. But Goodnight’s heroes were artists from the classic Realism school, including Carl Rungius, John Clymer and Robert Lougheed.

At her father’s urging, Goodnight pursued a business degree. After graduation, unable to stay away from art any longer, she vowed to study with the artists who most inspired her.

“I was relentless in pursuing an art education. Denver had and still has a nucleus of great artists who pursue Realism. Ned Jacob directed me to life drawing classes and to Carlson’s Guide to Landscape Painting, by John F. Carlson, which became my bible. I have a hardback copy of this book with a $5.95 price penciled on the inside cover,” she explains.

“Like many realistic artists of my generation, I set out to learn the technical skills from any available source. I keenly felt a need to better understand anatomy to be more convincing with my work. The painter I admired the most was Carl Rungius. He hunted his models and then drew from the carcasses. This would never work for me. Loving animals was my inspiration.”

Goodnight began as a painter, intending to pursue it as a career. She started sculpting when she saw sculptor Ken Bunn’s work. “I was awed,” she said. “I saw sculpture as a way to learn anatomy.”

But the lure of the clay kept her sculpting for the largest part of her career, earning her kudos and having her work placed in museums and private collections around the world.

When one considers the breadth and sheer number of Goodnight’s wildlife subjects, “working from life,” her tried-and-true mantra, could pose obvious challenges.

“I learned a lot about the anatomy of different animals when living in Colorado and New Mexico. I had a rehabilitation license,” she explains. “I raised prairie dogs, mule deer fawns, a coyote, several raptors, a black bear cub, raccoons, a blind, mentally retarded elk and a buffalo named Charlie.”

These animals in fact inspired many of Goodnight’s sculptures. “A mule deer raised two fawns right outside my studio and I decided I had to sculpt them,” she muses. Her studio was built so that horses could be brought in for her to study and measure. Charlie the buffalo soon had that honor as well.

A descendant of Colonel Charles Goodnight, famous for having pioneered the legendary Goodnight-Loving Trail with his cattle between Texas and Wyoming, Veryl developed a keen interest in history when she and her father rode a portion of the trail. In much the same way that her love for animals always inspired her work, Veryl’s connection to and affinity for Western history began to show up in her work. Just as Goodnight was making history as one of the few women sculptors, her interest in the role women played in the West became evident in her work.

While many of her works include pioneer women and historical scenes from the American West, one of Goodnight’s most celebrated works was inspired by an event that happened half a world away. The Day the Wall Came Down is a 14,000-pound monument — 30 by 18 by 12 feet — that celebrates freedom. And Goodnight still vividly recalls the dream she had on November 9, 1989, after watching the Berlin wall topple. It was a dream that spawned the remarkable sculpture of five horses jumping over a crumbled Berlin Wall. In addition to the monument’s installation at the George Bush Presidential Library in College Station, Texas, a sister casting of the larger-than-life mares and stallion was given to the people of Germany in 1998. The bronze monument stands today at the Allied Museum in Berlin.

Smaller but no less inspiring is another bronze Goodnight made of a pioneer woman cradling an orphan fawn. Cares for Her Brothers was inspired when Goodnight raised two orphan fawns. She developed an intimate understanding of how early women pioneers co-existed with the animals around them, be they wild or domesticated. “I envision myself as a pioneer woman, living close to the land and sharing my life with animals. I did Cares for Her Brothers after doing a show with Senator and artist Ben Nighthorse Campbell. He’d visited me at feeding time after the show and followed me from animal to animal. A few weeks later I received a letter from him. It read, “I told my Grandmother of a woman whose heart goes out to all living things. She said she should be known as Ewu Wumishi He Me — Cares for Her Brothers.”

Robin Salmon, curator of Brookgreen Gardens near Myrtle Beach, South Carolina, where Cares for Her Brothers is permanently installed, says that the sculpture has attracted a strong following among visitors and staff alike. “There are many important sculptures in the Brookgreen Collection,” states Salmon, “but only a few have that kind of magic.” As testament to that magic, the ashes of three people, including the conservation volunteer charged with maintaining the sculpture, are scattered around the sculpture.

Goodnight’s exhibit at the Gilcrease features working-size models of every life-size sculpture she has ever done, including Cares for Her Brothers and Paint Mare and Filly, which is installed at the National Cowboy and Western Heritage Museum. Two life-size pieces, New Beginnings, depicting a new arrival to the Old West, and Hi Country Summer, a life-size elk, will also be featured.

Explaining the significance of the exhibit to her, Goodnight says, “The Rendezvous exhibit at the Gilcrease Museum is the pinnacle of my career. I see it and the book, No Turning Back, as a celebration of the past 40 years of my career, but I also see it as a turning point. I want to go beyond what I’ve done, continuing to explore the significance of the animal/human relationship, but in a sum greater than what I’ve done up until now. I want to do it both in sculpture and in painting.”

Goodnight has returned to painting, and counts it as an honor to be painting on an easel made by Wyoming artist Jim Wilcox for the now deceased artist, Lanford Monroe (1950 – 2000), one of the country’s greatest wildlife artists.

Goodnight’s goal is to be able to do three significant sculptures a year and to be able to paint the rest of the time. “Living on 57 acres of prime Colorado wilderness keeps me in touch with the land and with the animals that live here,” she says. “I spend as much time as I can painting outdoors when I am not in my studio working on a sculpture. I see myself continuing in this manner.” For that fact alone, collectors can breathe easy. After 40 years, Veryl Goodnight is just hitting her stride.

Senior Contributing Editor Shari Morrison has been writing about art for more than 20 years. An avid traveler, she visits museums and galleries, reporting on national and regional art happenings. As a poet, she is a member of The Live Poet’s Society, which is celebrating its 20th anniversary in 2011. 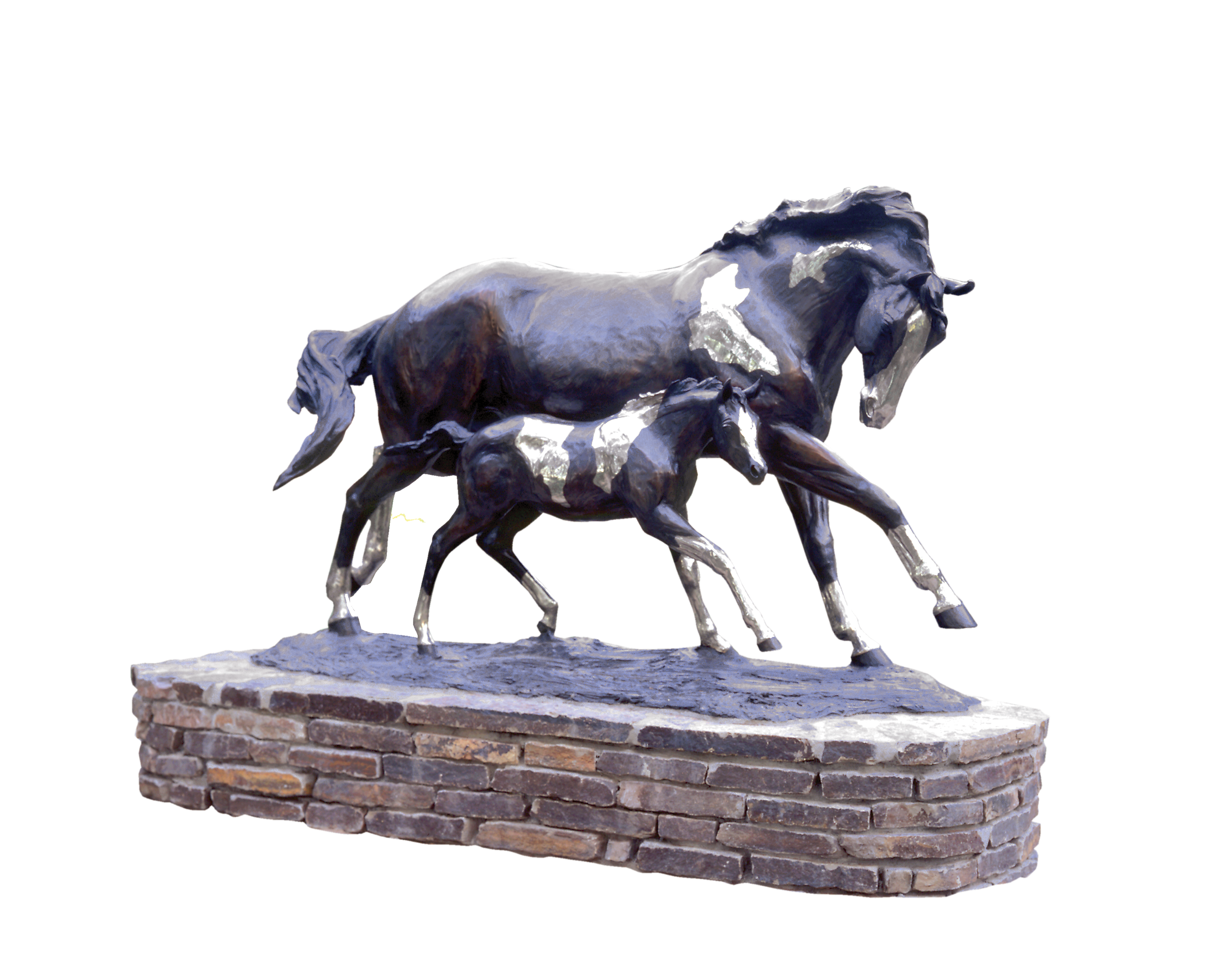 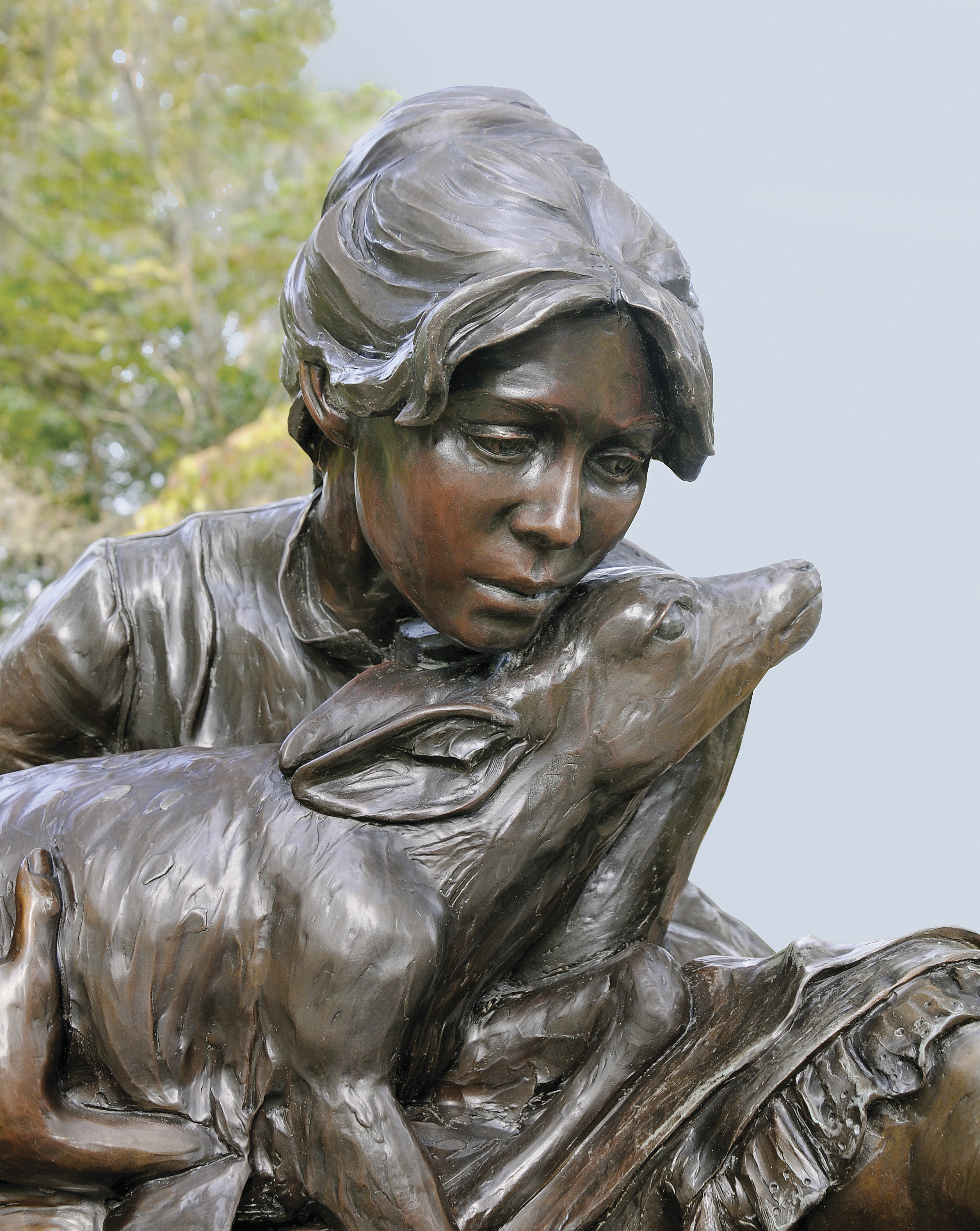 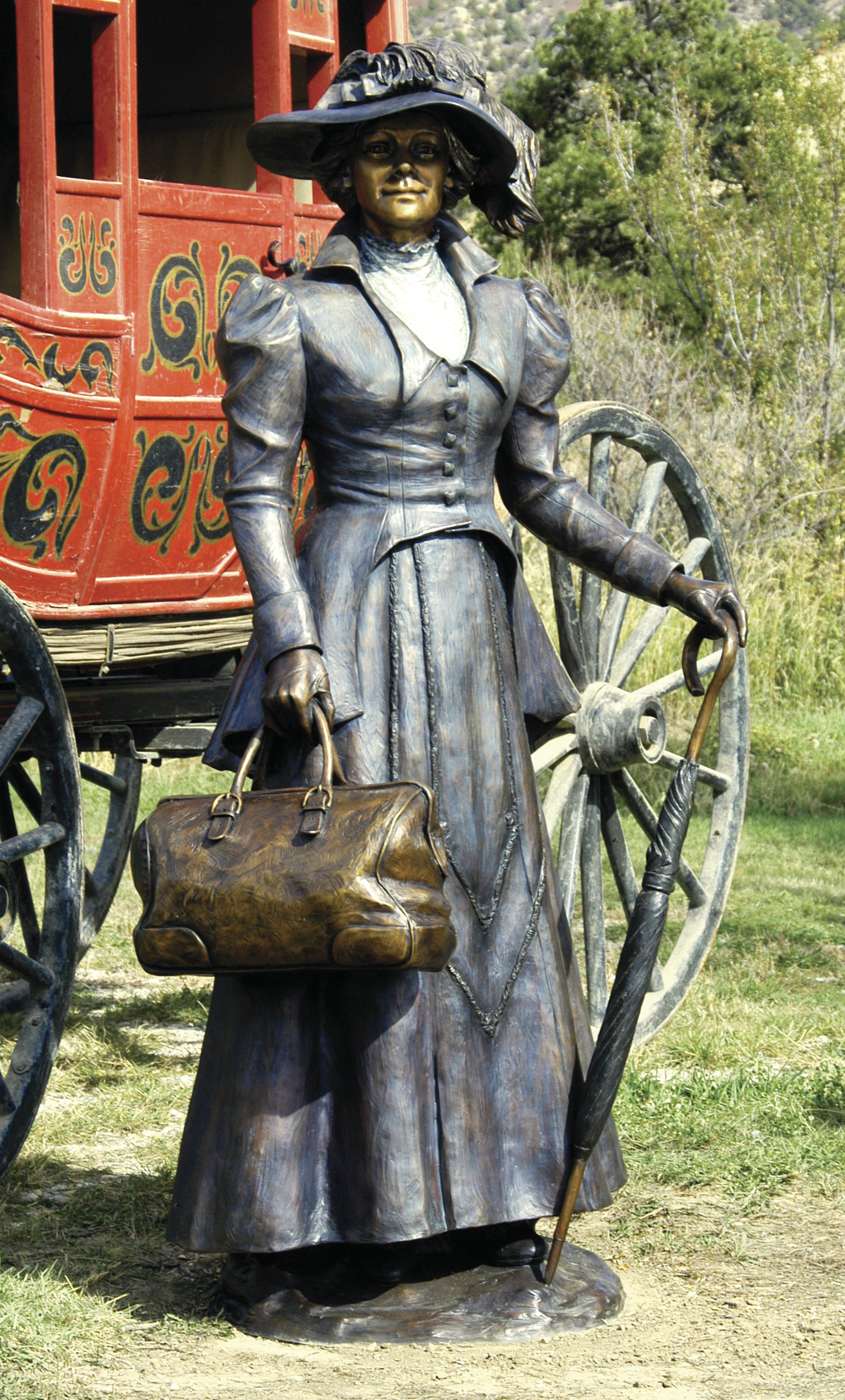