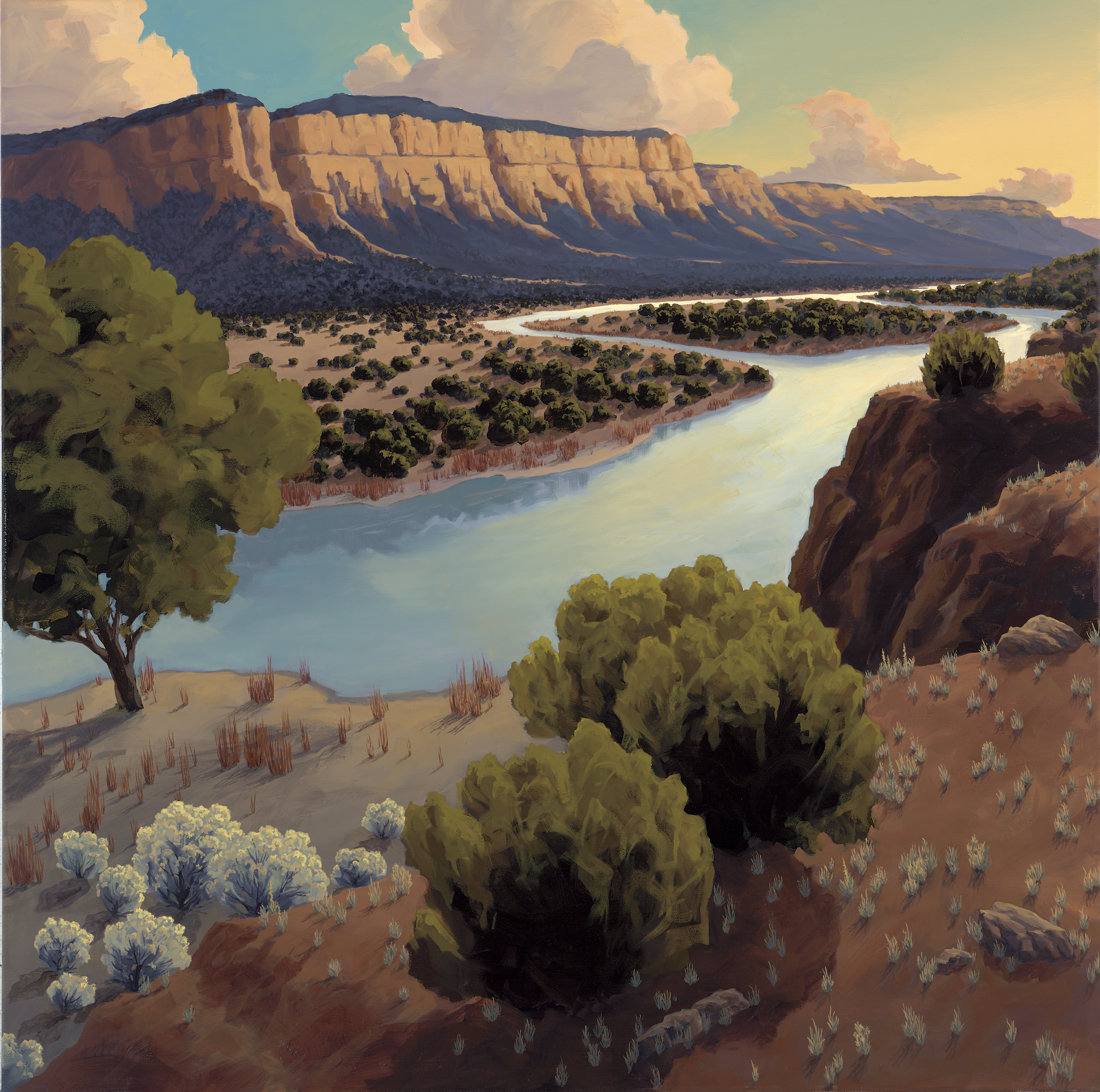 24 Jul Nothing But Blue Skies

He grew up in Southern California, taught ceramics in Hawaii and spent 30 years making a name for himself as a printmaker in New Mexico on a journey that — perhaps surprisingly — has led Doug West to garner an international reputation as a Southwestern landscape painter.

Not bad for a guy who didn’t try painting until his junior year in high school.

Known for his bold colors, majestic skies and clouds that are like heroic characters, West has made an easy transition from printmaker to painter of Southwestern scenes since leaving the world of screens, drawing racks and chemicals behind two years ago to focus solely on oil-on-canvas.

West’s journey may seem winding and haphazard, but it all adds up.

Growing up in Riverside, he spent a lot of time camping with his father, and those times resonated. “Wider, open spaces are a good place to be,” says the 63-year-old West, who has lived in Taos, New Mexico, the past 12 years. “As it turns out, that’s kind of the theme of my work.”

Hawaii taught him that he didn’t want to become a studio potter, and watching the trade winds blow incredible clouds over the north shore of Oahu gave him a love of the skies. Printmaking taught him how to create an image in a step-by-step process like making a puzzle. “I’m sure that carries on into paintings,” he says.

West arrived in Santa Fe in the winter of 1973-74 — picking it “sight unseen” for its camping, hiking and skiing possibilities. He started printmaking as a hobby. That led to a show in Santa Fe, which got him in a gallery, and a year later he was with a national publisher distributing prints across the country.

“In the early 1980s, there was a feeding frenzy for Southwestern art, and it was national,” he says. “People just couldn’t get enough of it. The timing was impeccable to begin a career.”

He left printmaking because he was bored and wanted a new challenge, but his prints and landscape oils are tied together, illustrating “my love for the land and for the clarity of light here, the unique quality of light here, distant visions — distance is very important to me — space and imagery.”

“I love working with brushes,” he says. “I like the tactile feel. I love the painting against the canvas and its response back. There’s a pressure thing that happens. I love the mark making. My body motions are part of the message. It was natural for me. I’m still dealing with color, but in a totally different way, much more subtle.”

“I’m interested in creating as graphic a reality as I can, and a lot of success to me of doing that is color, and particularly a feeling of true atmosphere as a color of sky, spatial depth. That’s really important. Some pieces are amped up in color, a little more than reality, but not to the degree that amping up becomes unbelievable.”

As a printmaker and oil painter, West has shown internationally, with more than 50 one-man shows. In addition to Blue Rain Gallery, his works are carried by Leslie Levy Fine Art Gallery in Scottsdale, Arizona, and his own business, Doug West Gallery in Arroyo Seco, near Taos.

His favorite places to paint are right in his own neighborhood.

“I’ll go out and do photographic studies and also sketching,” he says. “I spend a lot of time observing, out particularly around the [Rio Grande] gorge around Taos, and in my backyard up against the mountains.”

Typically, West spends five to six hours in the studio five to six days a week. Although he has done some plein air work, most of his oils are created in the studio, where he will rotate a group of 10 to 12 paintings.

“I have a reverence for the moment in time that I can experience outdoors in solitude,” he says. “To me, that’s church. That’s where I feel grounded. That’s where I feel a spiritual connection to earth and like I’m part of that circle of life. It’s mirrored: life and death, creation and destruction, chaos and organization. It’s all there for me.” 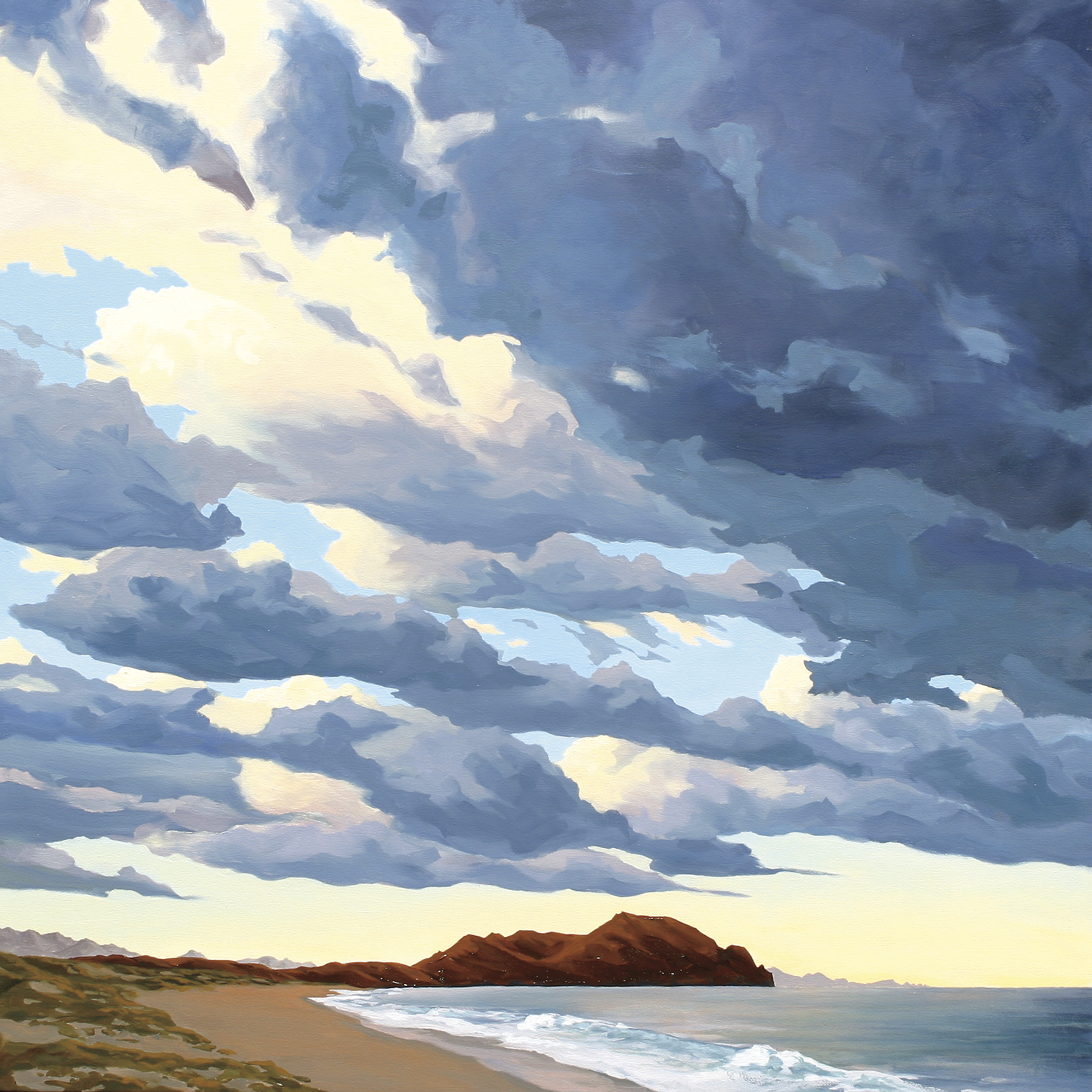 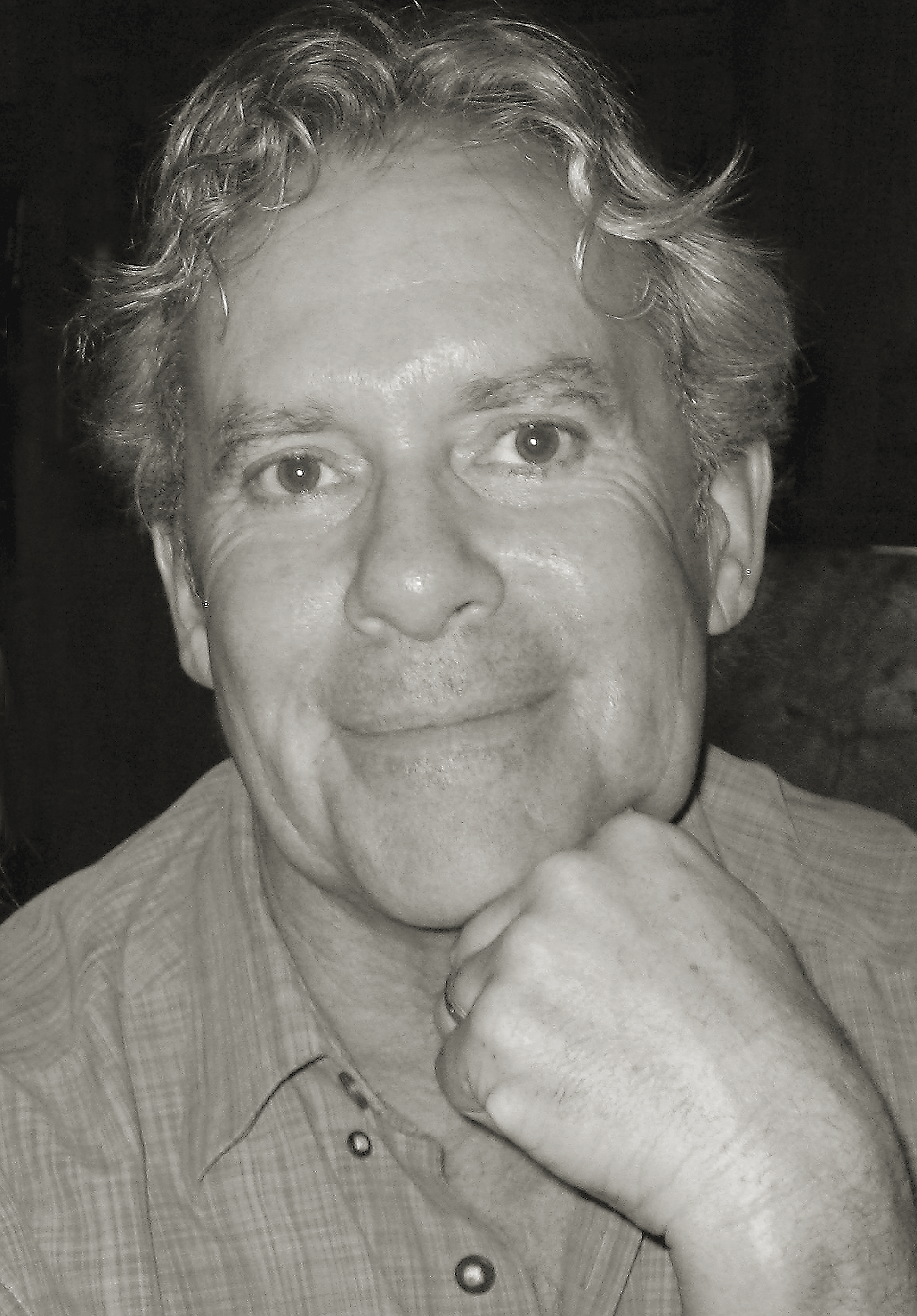 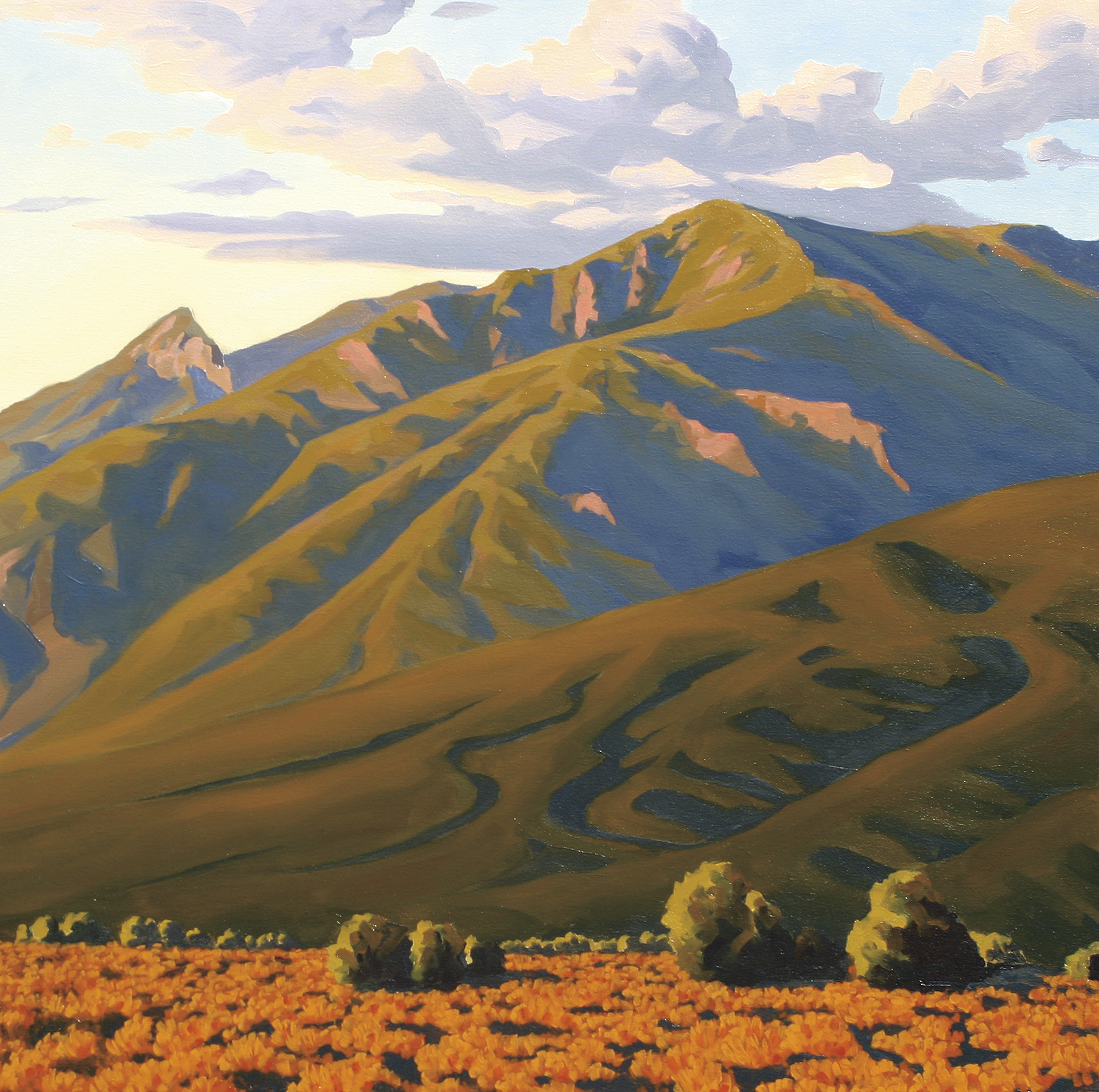