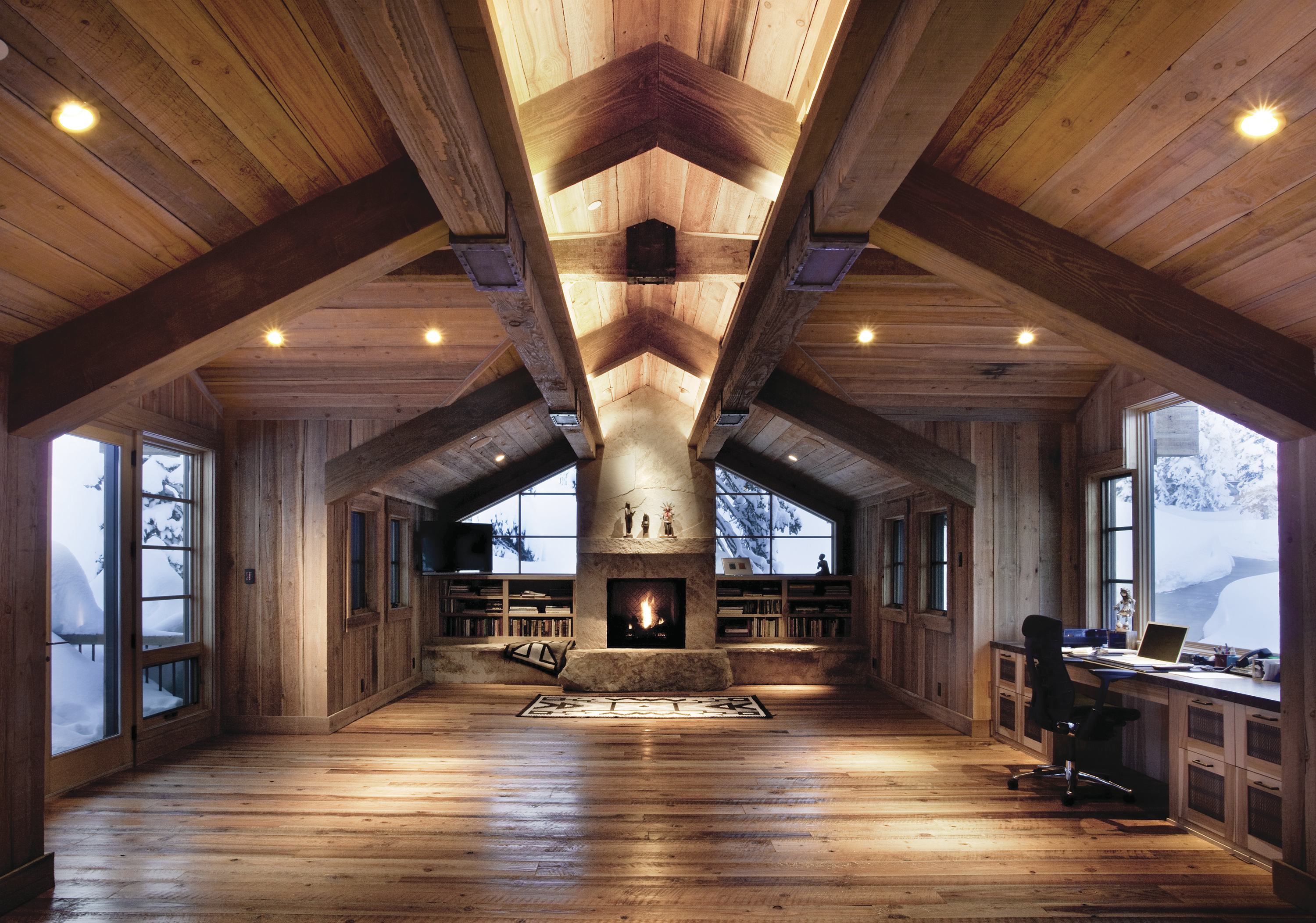 The cruciform design of the house allows maximum natural light even in winter surroundings to show off rich textures from the rug and unique, oversized furniture, and sculpture by Sherry Sander.

Living in some of the busiest and most dangerous places in the world is part of the job if you’re an international correspondent for ABC News. Despite the nomadic patterns of his professional life, Bill Redeker managed to carve out a niche for himself, wherever he was.

To hear him tell it, in between his Emmy award-winning work and meeting with the late Peter Jennings (who was his good friend), he was creating a home for himself. Renovating flats in London. Finding quiet pockets of stillness in fast-paced New York and Tokyo. Literally finding a bit of peace in Tel Aviv.

But the home that stands out most in his mind is actually the one he’s standing in now. Shoeless, his feet are covered in pristine white athletic socks (a habit he picked up while living in Japan). He opens the grand-scale wooden door to his latest, and quite possibly, greatest home — in the Red Cloud development of Deer Valley, Utah.

“Welcome to winter!” he says, opening the door. The open floor plan behind him seems grand, but approachable. Just beyond the carefully chosen furniture pieces and state-of-the-art Bose speaker system are several stunning vistas of the Wasatch Mountains, freshly covered in the season’s first snow.

“I didn’t even get a chance to bring in the furniture,” Redeker says pointing to the neutral-hued dining set on his vast wraparound deck. “Luckily, the entire deck is heated, otherwise, there’d be a lot more snow to dig in order to get to it.” He waves his arm slowly to demonstrate the deck’s range that wraps around the living room and butts up against the kitchen where a grill awaits another season of entertaining.

Inside, walnut floors and cabinetry and limestone from nearby Brown’s Canyon outline the cruciform layout devised by Redeker’s architect, Jack Thomas, of Park City. The two have been friends for seven years. They both love to travel. And when Thomas discovered this lot, he showed it to Redeker, knowing it would be perfect.

“The land dictated the house,” Redeker says, still looking out the window. “Jack and I were here quite a bit taking photographs of the land, the trees, where the boulders and rocks were.”

Thomas in fact, looked to the trees for inspiration. A distinguished architect known for stunning high-end residences, Thomas is also noted for his sensitivity to sustainability and the natural characteristics of the land a house will be built upon.

“With Bill’s house, I’m really proud of the way it grows out of the site,” he says. “Bill also believes in sustainable design so we preserved as much as we could of the lot. The house respects existing vegetation, and with the structure I visualized a tree. I think it’s a perfect structural form. Stone pediment anchors the house. As you get higher into the structure, it branches. There’s still strength, but there is an airiness to it.”

Redeker and Thomas worked closely with Midway Construction as well as interior designer Linda Winslow and Maren Bargeen of Gallery MAR to create a space that pays homage to the land. “I think it’s a result of me living in such cramped or war-torn places,” Redeker reveals. “I have all this beautiful space, I want to see the vistas.”

The open floor plan ensures that Redeker can see Iron Mountain or Clayton’s Peak while making an espresso from his beloved Miele machine that was built into the custom walnut cabinetry. One fireplace has four facades, complying with local building codes, but also serving several spaces with striking stone work and the warmth of the hearth.

Winslow, a designer based out of the Bay Area, has known Redeker since 1985 when she worked with him on his Bel-Air home. Throughout their projects, she grew to know his preferences — which parallel her own aesthetic.

“Bill prefers a contemporary and serene environment, with, in this case, orientations to the awesome views,” Winslow says. She incorporated natural products including stone in basket-weave patterns or different cuts of the same slab, custom-made steel fittings for the bar, good wood finishes, which bring in a lot of texture. Winslow herself designed numerous pieces, including the walnut coffee table in the living room, upholstered chairs that welcome guests by the fireplace, as well as the steel bed in a guest room.

The chandelier in the dining room and the lighting in the kitchen and hall are all strikingly contemporary but fit the mountain setting with clean, simple lines and unique light bulbs.

Redeker’s overarching goal was that his house be more sophisticated. “I got over the log cabin a while ago,” he says. “I wanted this house to be different than other mountain homes that I’ve seen.”

The elemental influences and the neutral palette are ideal for framing the views and displaying Redeker’s art collection. Over the years and across the continents, he has amassed an eclectic range of furniture and art.

Maren Bargeen is still working extensively with Redeker to find a place for the pieces without having the home seem like a photo album or a museum.

“Bill truly takes his time researching his art pieces and with so many windows, we had to be careful about where and how we placed the art so that it wouldn’t clash,” Bargeen says. “The whole house is unique in that it simultaneously reflects the natural beauty of our Western landscape, but also provides a wonderfully Zen feel without garish colors or touches.”

Redeker’s many Japanese, Chinese and Korean prints and furniture pieces feature elegantly throughout the house, blending seamlessly with his extensive collection of contemporary Western art, which includes pieces from Douglass Aagard, Brooks Yates and Roy Vellinga.

Where the house faces more enclosed or darker views, more colorful and bright pieces are strategically placed to offset the lack of light. Guests can see colored glass pieces in glass cabinetry in the kitchen or take in a quiet moment with the Yates and Vellinga pieces.

Downstairs are bedrooms where Redeker’s many guests stay during the ski season. On the same floor, there’s also an all-purpose room that serves as a media center, game room, award and art showcase and even a ski locker complete with ski boot dryers, ski racks and plenty of space to gear-up.

“Bandana ski run is just out there,” Redeker says of the snow patch outside. “It’s the only connection to Empire ski run from this side of the hill and it’s how I love to start my day.”

As Redeker looks out onto the snow-covered slope, it’s easy to imagine him standing just outside on his skis, taking in all the views before quietly gliding into the great white. 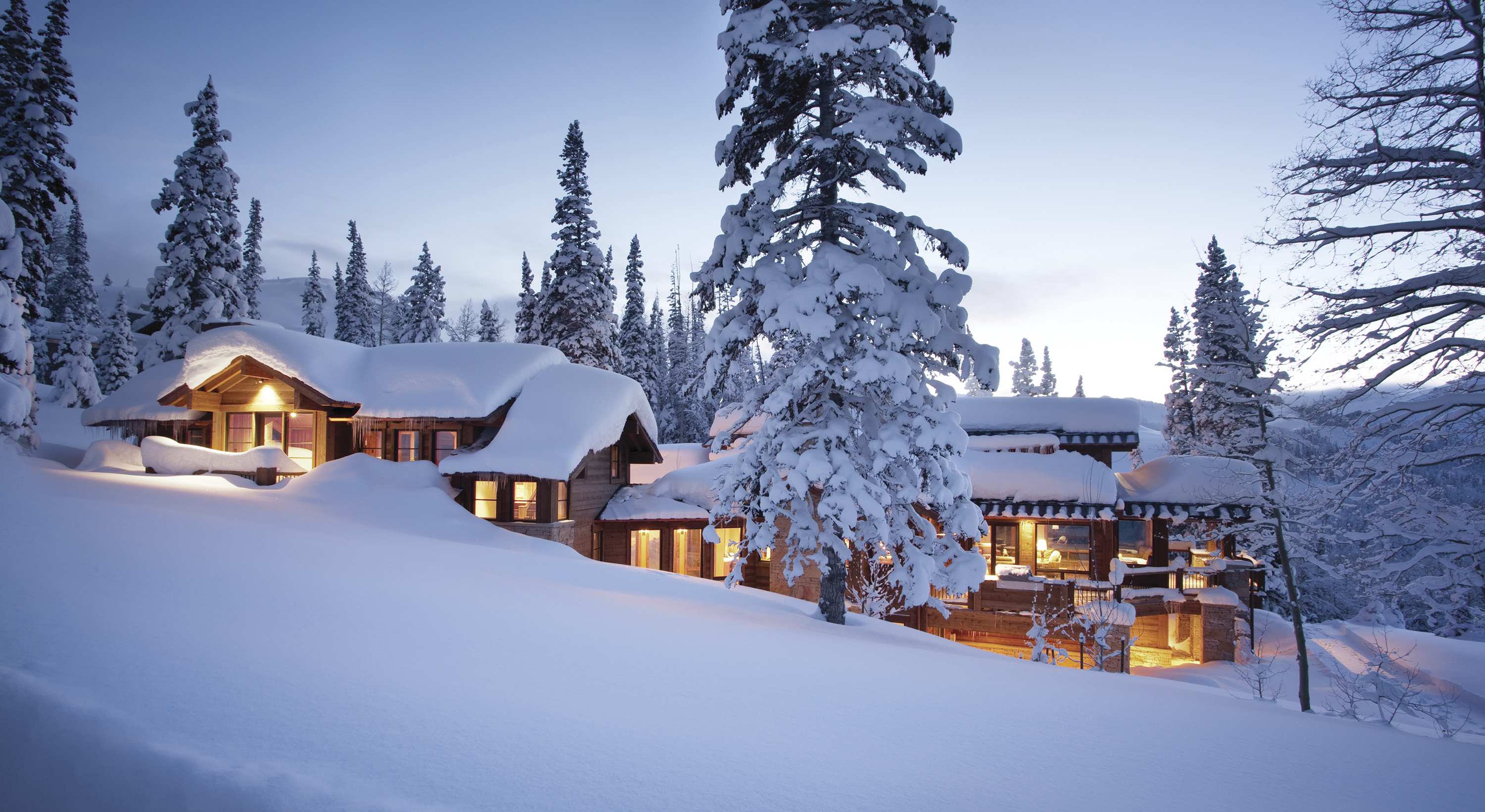 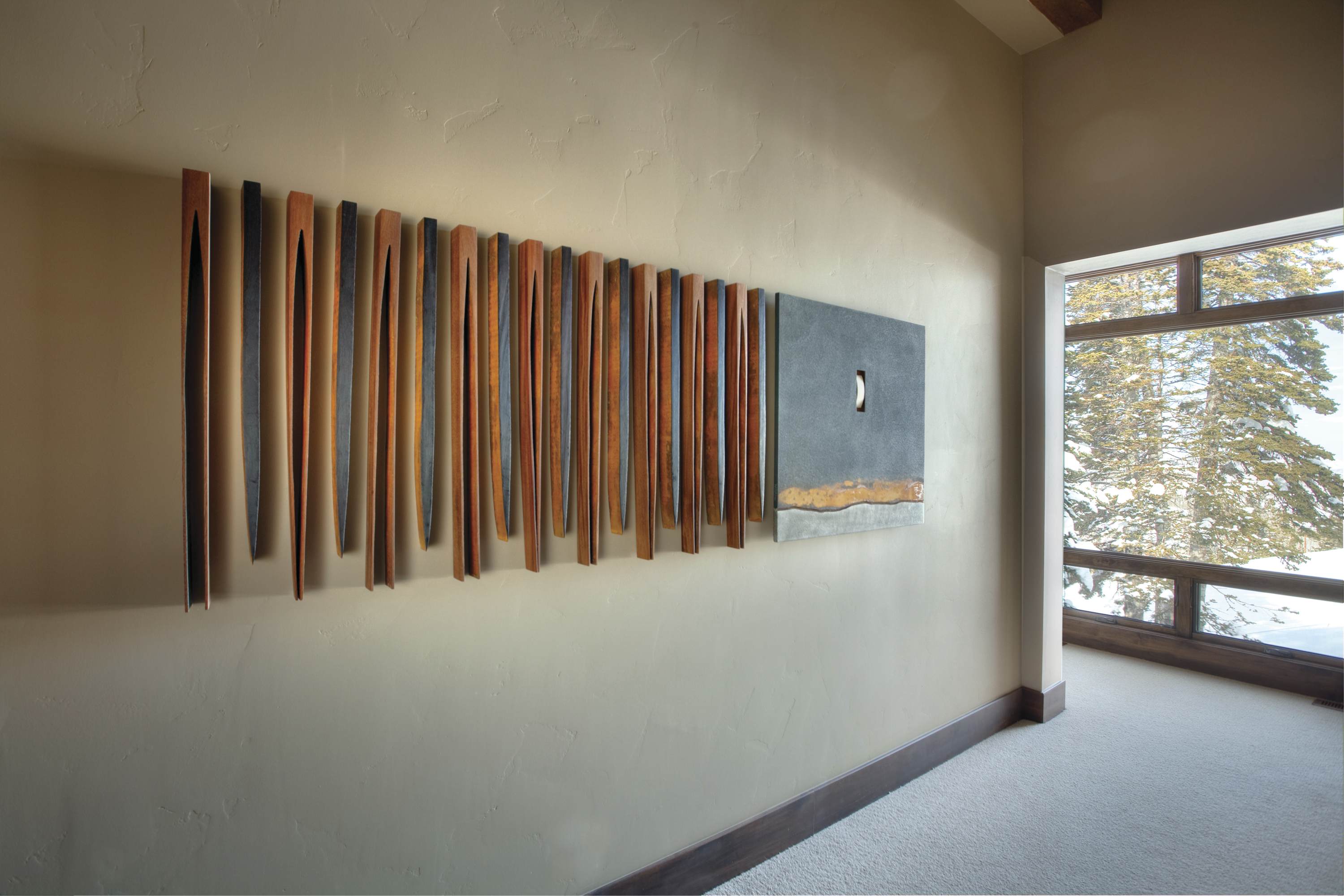 Contemporary sculpture by Pascal appears to morph as you travel through the hallway. 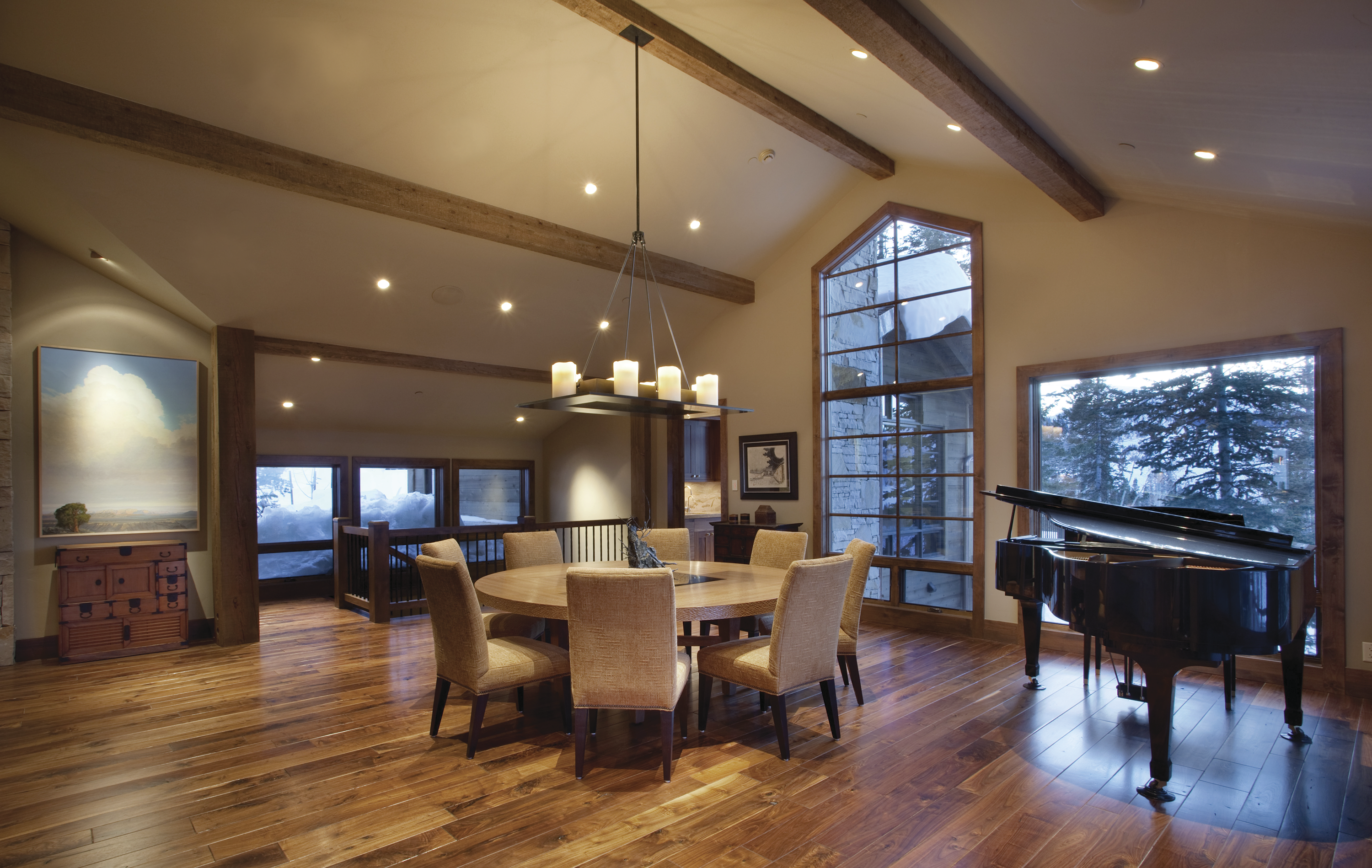 Oversized furniture throughout the home accents the expansive yet welcoming space, blending in thanks to warm, neutral hues. 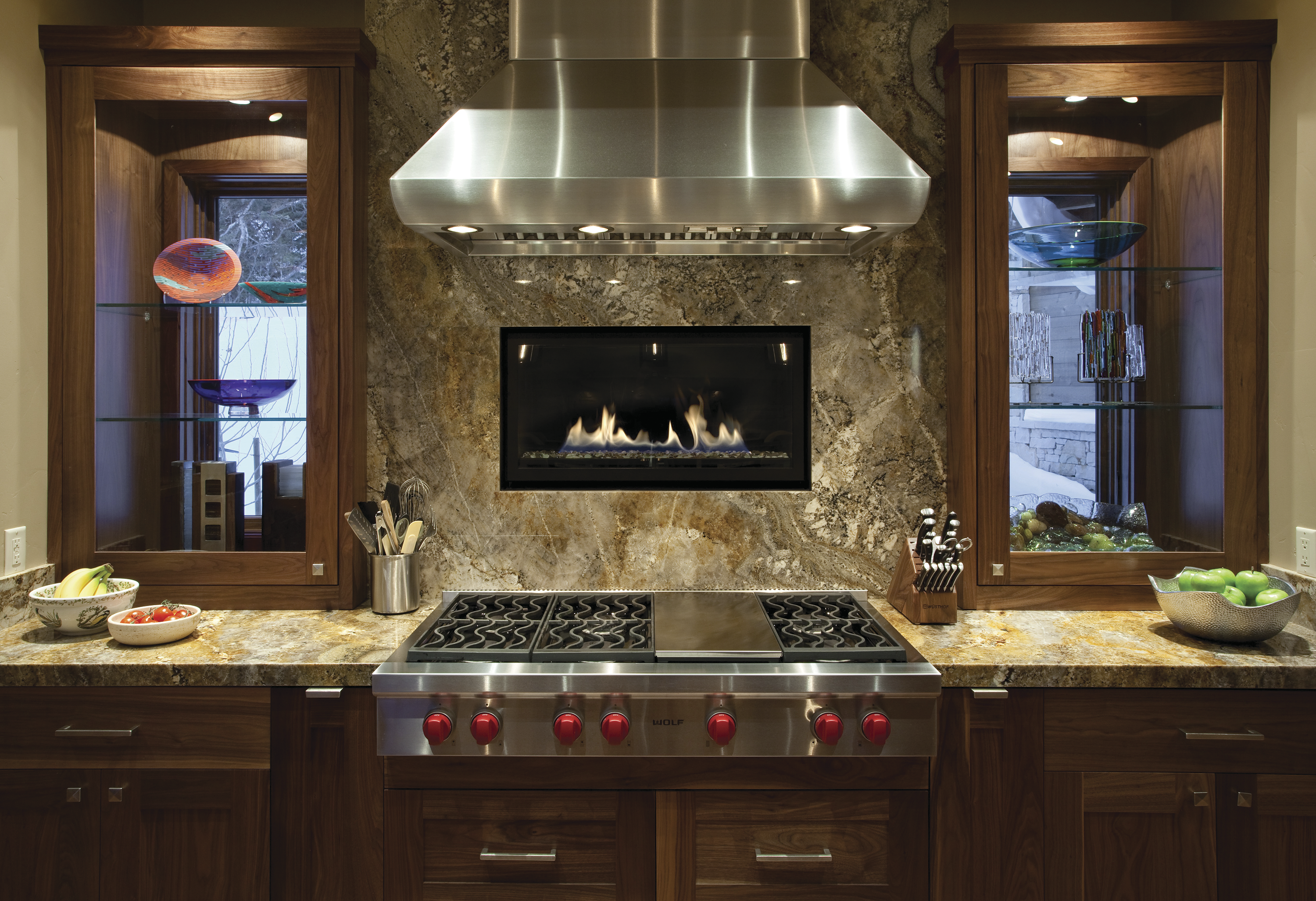 As daylight changes in the kitchen so do the kitchen’s glasswork — a perfect location for art glass. 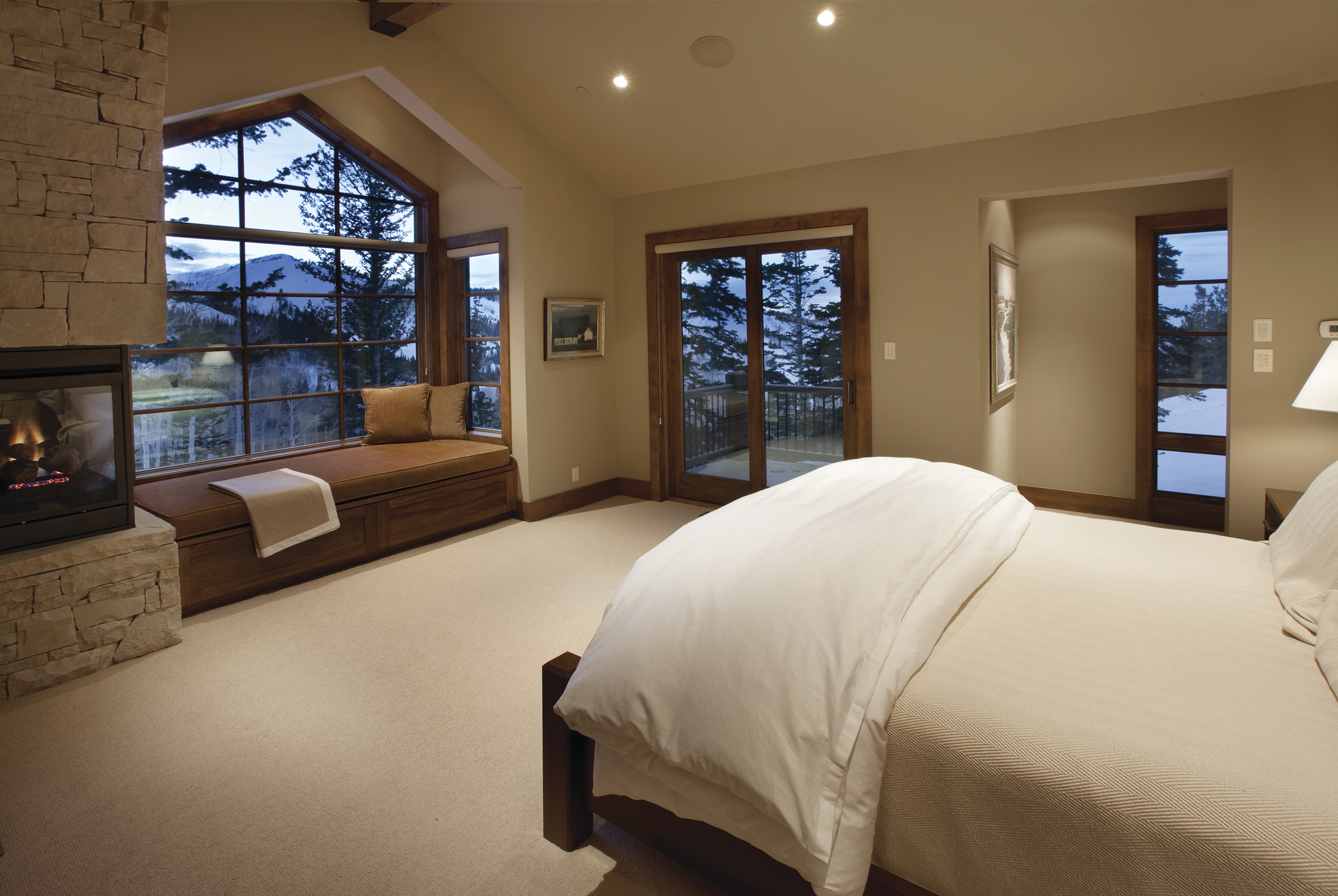 A neutral palette and rich wood accents provide a Zen-like backdrop for the stunning mountain views. 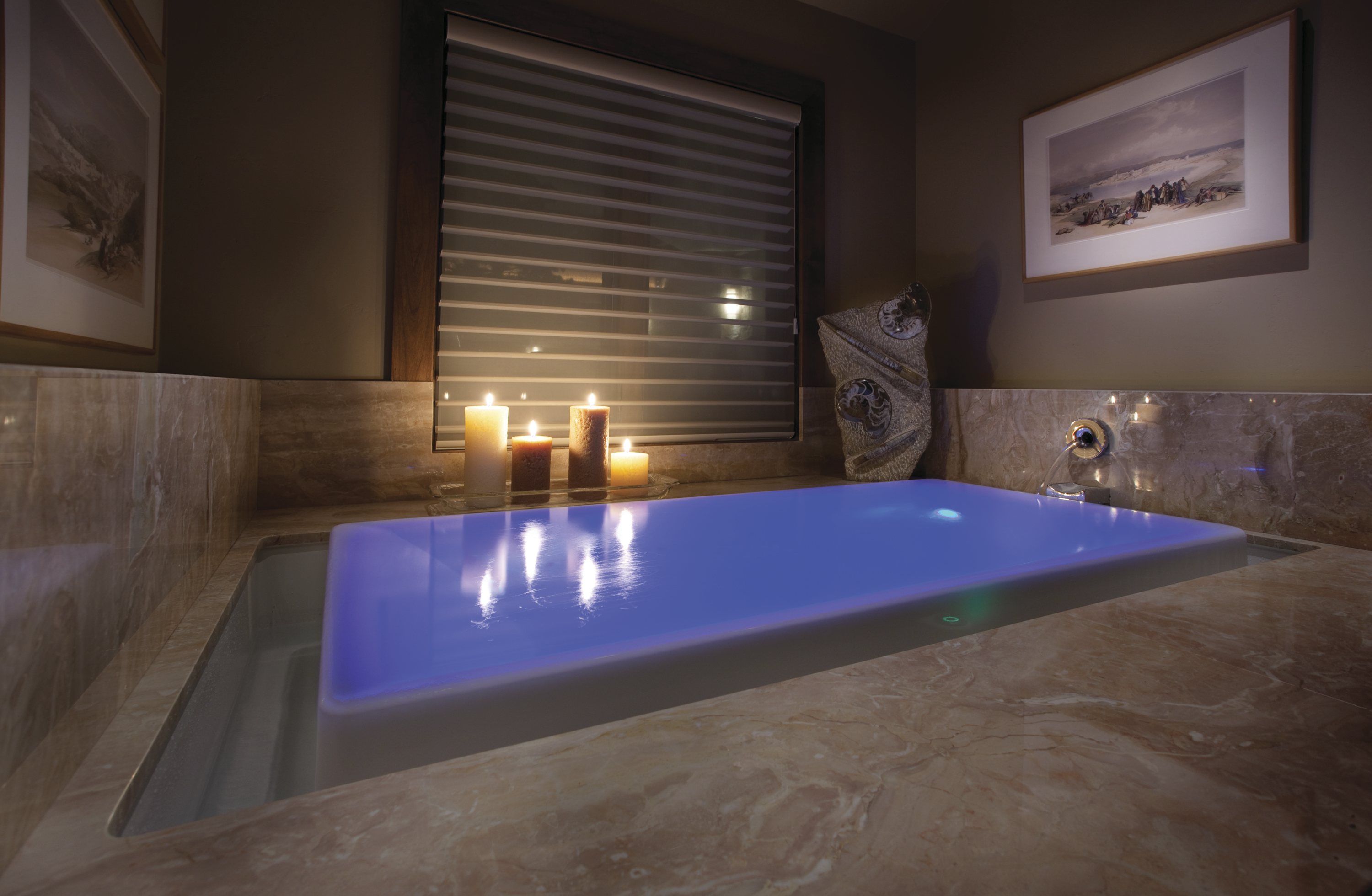 Stone quarried from nearby Brown reservoir adds texture and interest to the bath. 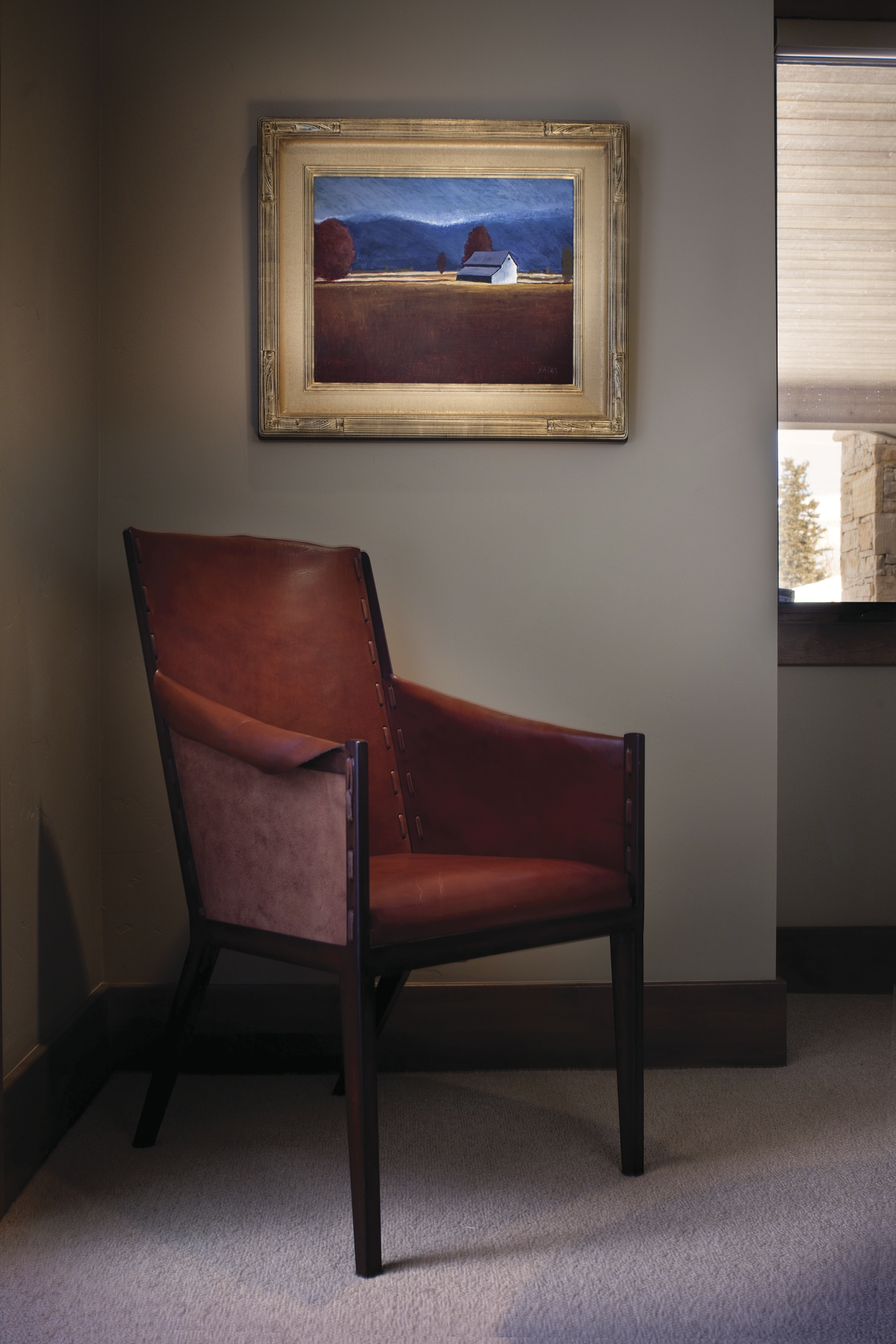 The quiet nature of this Brooks Yates painting perfectly captures the serenity of Redeker’s guest room. 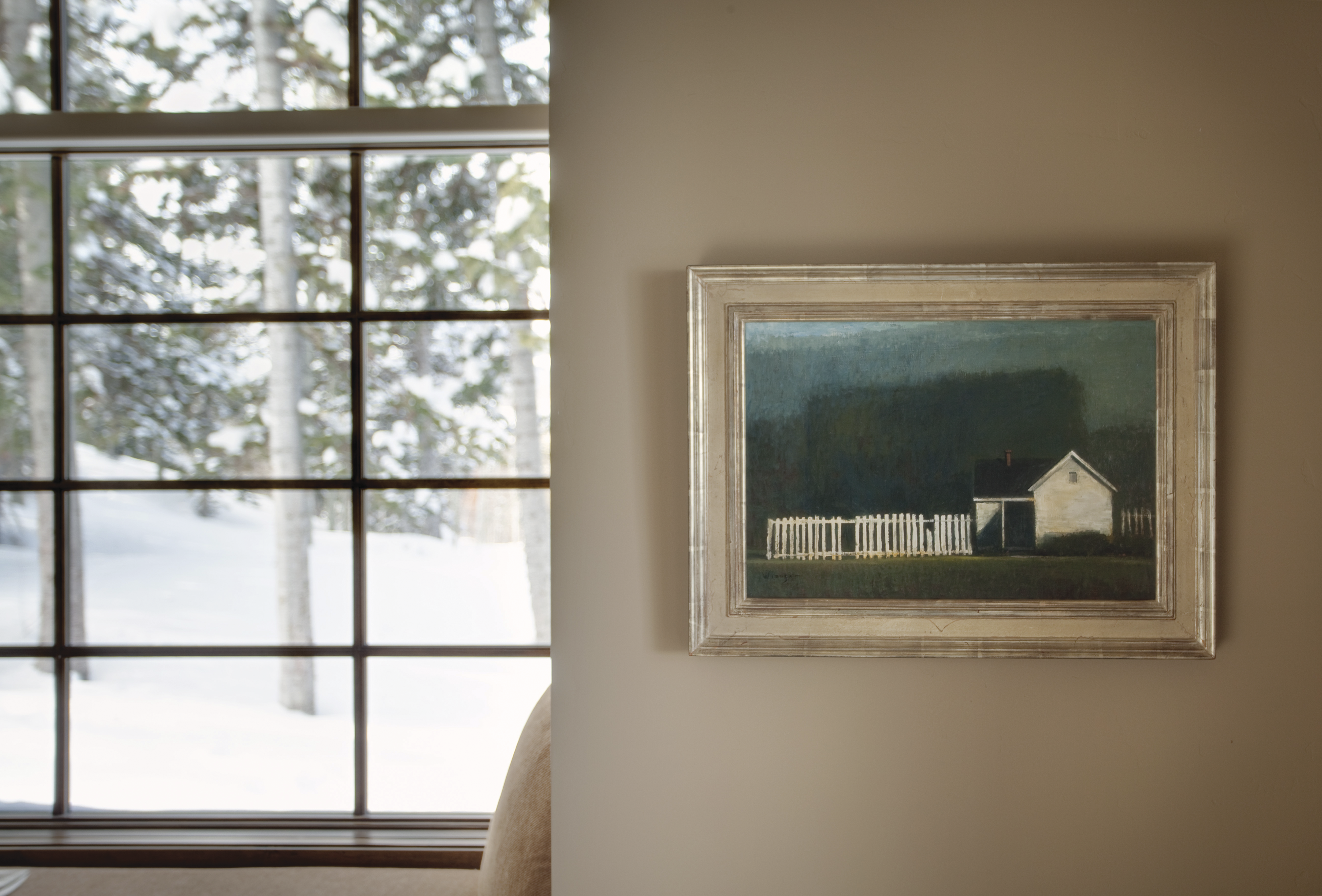 Throughout the home, Redecker’s art collection is thoughtfully placed, creating comfortable nooks and quiet vignettes, like this one which features a painting by Seth Winegar, one of Redecker’s favorite artists.