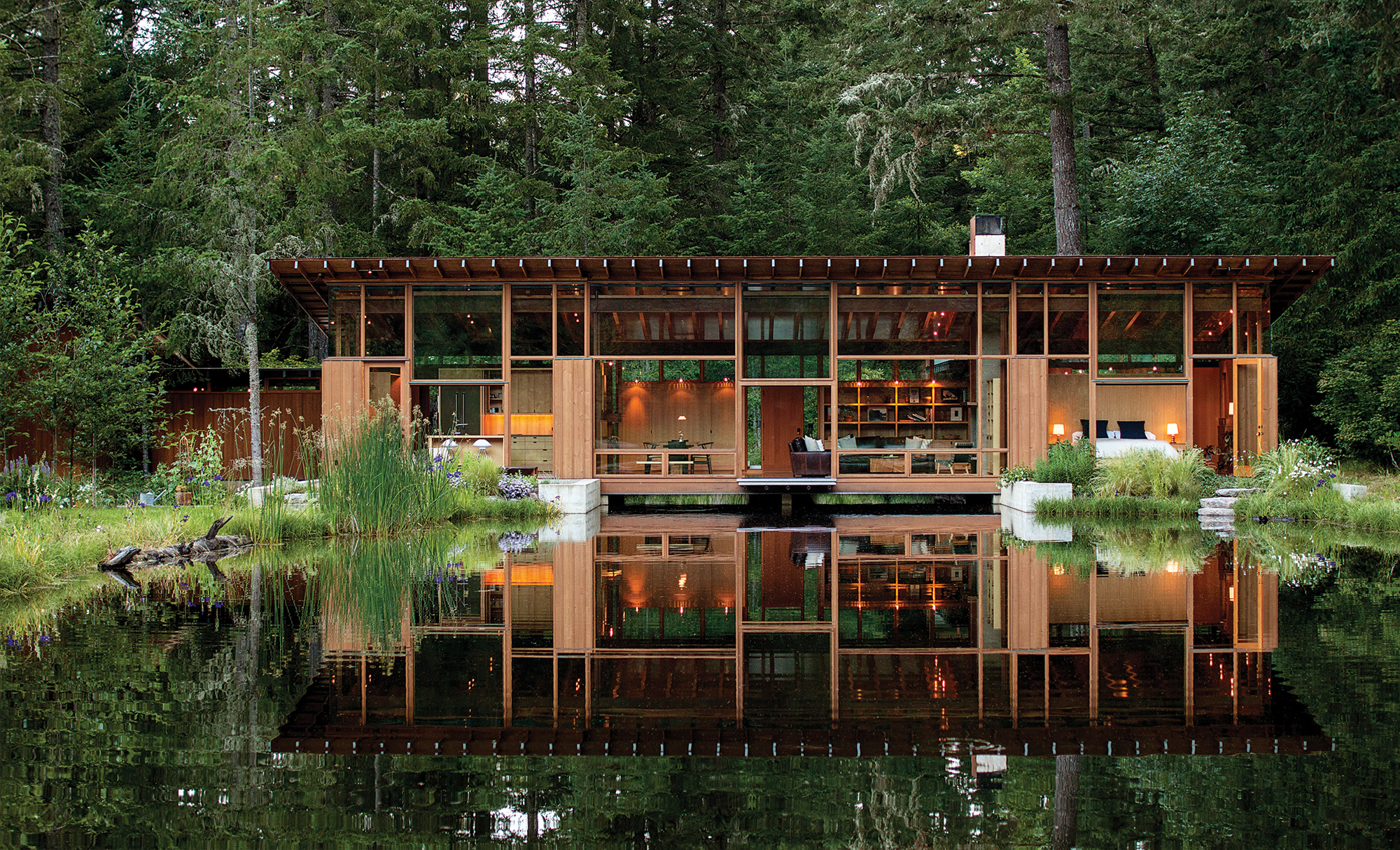 IF FRENCH IMPRESSIONIST CLAUDE MONET WERE ALIVE, he would have painted this scene: A rectangular house with a glass façade, appearing in a lush forest. The structure is suspended over a reflection pond, its mirrored image interrupted only by a scarlet rowboat.

Welcome to the home of Michael Etzel and Carey Critchlow, whose passionate connection to nature evolved into a modern dream home where ancient flora and fauna were barely disturbed during construction. Here, the landscape is as much a part of the structure as the steel beams and cedar paneling.

Designed by Jim Cutler, of Cutler Anderson Architects, this environmentally sensitive abode is what Cutler calls “a giant ear” that echoes the rhythms of nature around every log and fern. Birds initiate songs at early dawn while bullfrogs croak up a bass symphony come evening.

Located in Newberg, Oregon, the 1,440-square-foot dwelling essentially acts as a bridge across the pond’s north end. Gazing from across the pond, the home is ordered from left to right, starting with a kitchen and moving into the dining room, living room and finally the master bedroom — all in a row, much like an open dollhouse. A wall of windows faces the trout-filled pond where deer and the occasional black bear pay surprise visits. Tucked behind the home is a detached 550-square-foot guest house connected by a breezeway.

The pond perpetually changes depending on the light and weather. “We have snow and rain, and when you walk through the living room to the kitchen, it is like catching a glimpse of a new movie scene,” Critchlow says. “It affects how you feel and how you connect to the world and can be quite mesmerizing.”

Built by R&H Construction, the house is composed of glass, steel, zinc and cedar. The dwelling breathes with life imbued by craftsmanship, from the custom doorknobs designed by Cutler Anderson, to the steel columns chemically rusted for their patina, to the concrete patio with intentionally chipped edges that appear worn.

Such precision resulted in Cutler’s firm winning the American Institute of Architects’ 2016 Housing Award for excellence in housing design. With at least 300 homes bearing his mark and four books published about his company, Cutler has garnered international recognition for projects ranging from office buildings to estates.

Cutler explains that the firm’s philosophy is to design structures that engage people with their environments, no matter what that environment may be. “We create work that doesn’t just blot out life to create objects,” Cutler says. “We coexist with other living systems, and it is a joyful experience.”

Originally, the owners planned to build on a hilltop overlooking their 60 acres, but it didn’t take long for Cutler to convince them otherwise. While walking across the property, the architect spied a “glint of water coming through the trees.” It was the site of a former logging bog. “The more I thought about it, the more it seemed like the most appropriate place to build,” Cutler says. He envisioned the bog expanding to a pond with the home perched on top.

Cutler refers to architecture as a “choreographed experience,” and this home serves as a perfect example. To enter the Newberg residence, visitors park about 150 feet away, walking through the forest and over a bridge that crosses a small section of the pond to arrive at the entry. Once the front door opens, the broad view of the pond is visible and breathtaking. “It’s a totally unexpected point of view,” says Etzel of the “dance” and one of his favorite aspects of the property.

Unlike other buildings, the skeleton of the home is also the finished product. Except for the guest suite, ceiling beams, brackets and bolts are all exposed. Electrical wires nest within hand-grooved wood trim.

“It was a very complicated structure that looks like a jewelry box,” says Duane Francis, R&H project manager. “There is nothing cookie cutter or repetitive about this house.”

While building, R&H Construction was asked to remove as little greenery as possible. The builders carefully rolled in track hoes and bobcats to excavate enough soil to create the 16-foot-deep body of water. The forest was not easy to preserve; the crew had to work its way around trees several feet from the building and only a small handful were removed, says Gary North, vice president of R&H. Even a severed log was rescued and strategically placed to look natural. “Cutler did not want anything to take away from the home’s organic nature,” North says.

The many months of painstaking labor paid off, and the house complements the personalities of its owners. “They are sophisticated, yet down to earth,” Beth Wheeler, the home’s interior designer, says. “The house is a wonderful portrait of them.”

While a Pacific Northwest statement house, this Oregon sanctuary cries livability. Critchlow commutes to her law office in Portland, while Etzel is only minutes away from his hilltop winery, Beaux Frères. He says their new abode makes them feel like “we are being exposed to the outdoors, and yet we have all the comforts of being indoors. The house just fits our style.” Etzel wanted a mudroom to remove his dirty boots when returning from the vineyard. And Critchlow wanted a slotted pair of tiny windows next to the sunken tub that she could crank open to hear the birds while bathing. When it rains, the couple attunes their ears to the drumming of the water on their steel roof, comforted by the muffled sounds. Last winter, when the pond froze, snow collected on the surface in a powder-sugar heap, creating “a blanket of complete tranquility.”

Earlier this year, the couple hosted their wedding in their new home. Under white umbrellas, the farmer and lawyer exchanged vows on the pond’s edge on a drizzly afternoon. Guests huddled in the house and patios, watching from afar. Cutler and Wheeler both attended. “It was about as perfect a wedding as you could imagine — a beautiful misty day,” Wheeler says.

After living here since March 2014, the couple continues to revel in the home’s unique architecture, the melodies of nature and the relationships the home facilitates with pond and woodland creatures. “It is still amazing for me to experience this each day and such a joy to come home to,” Critchlow says. 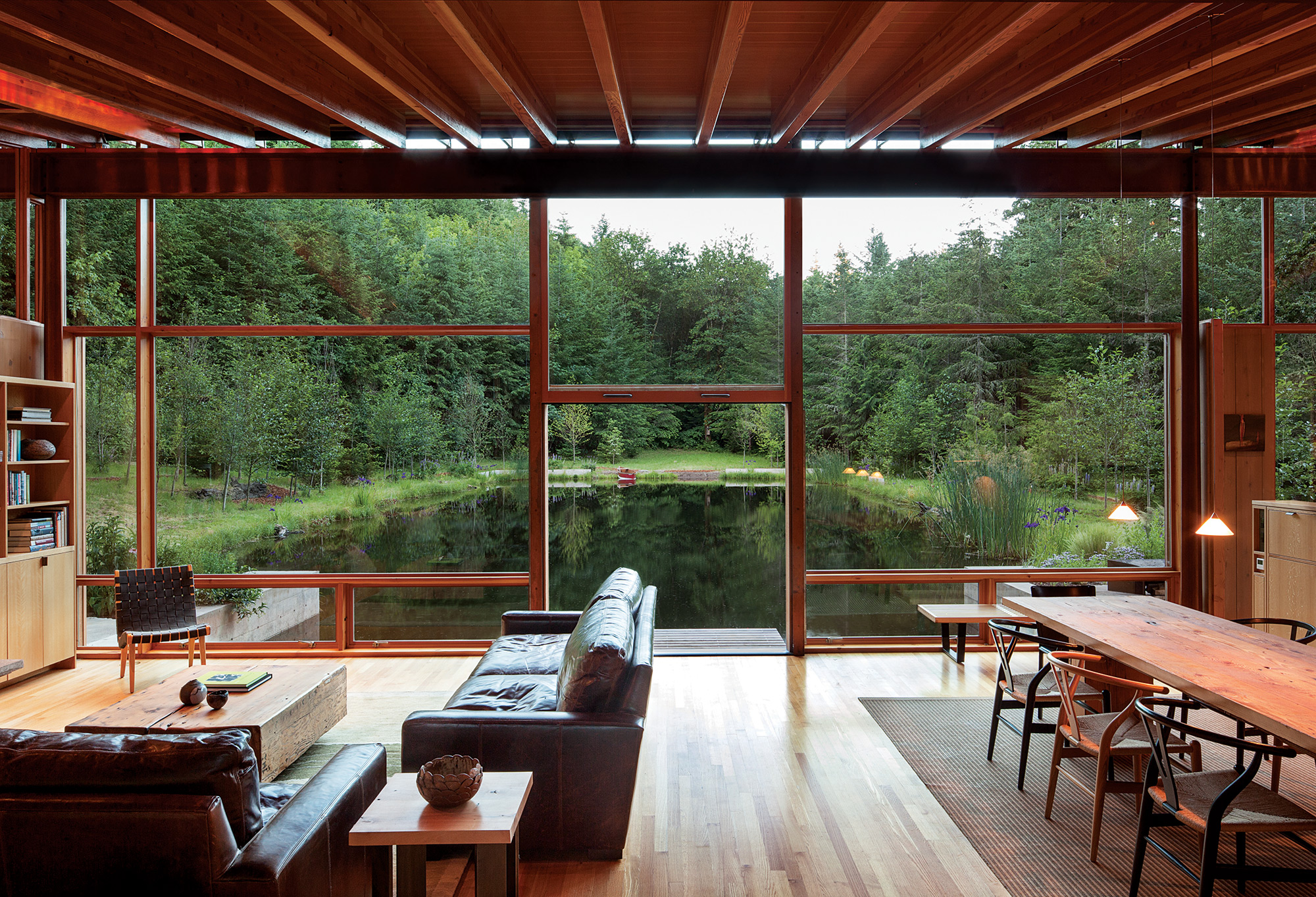 Homeowner Michael Etzel built the dining table and coffee table from wood found on the property, adding to the home’s organic aesthetic and connection to place. 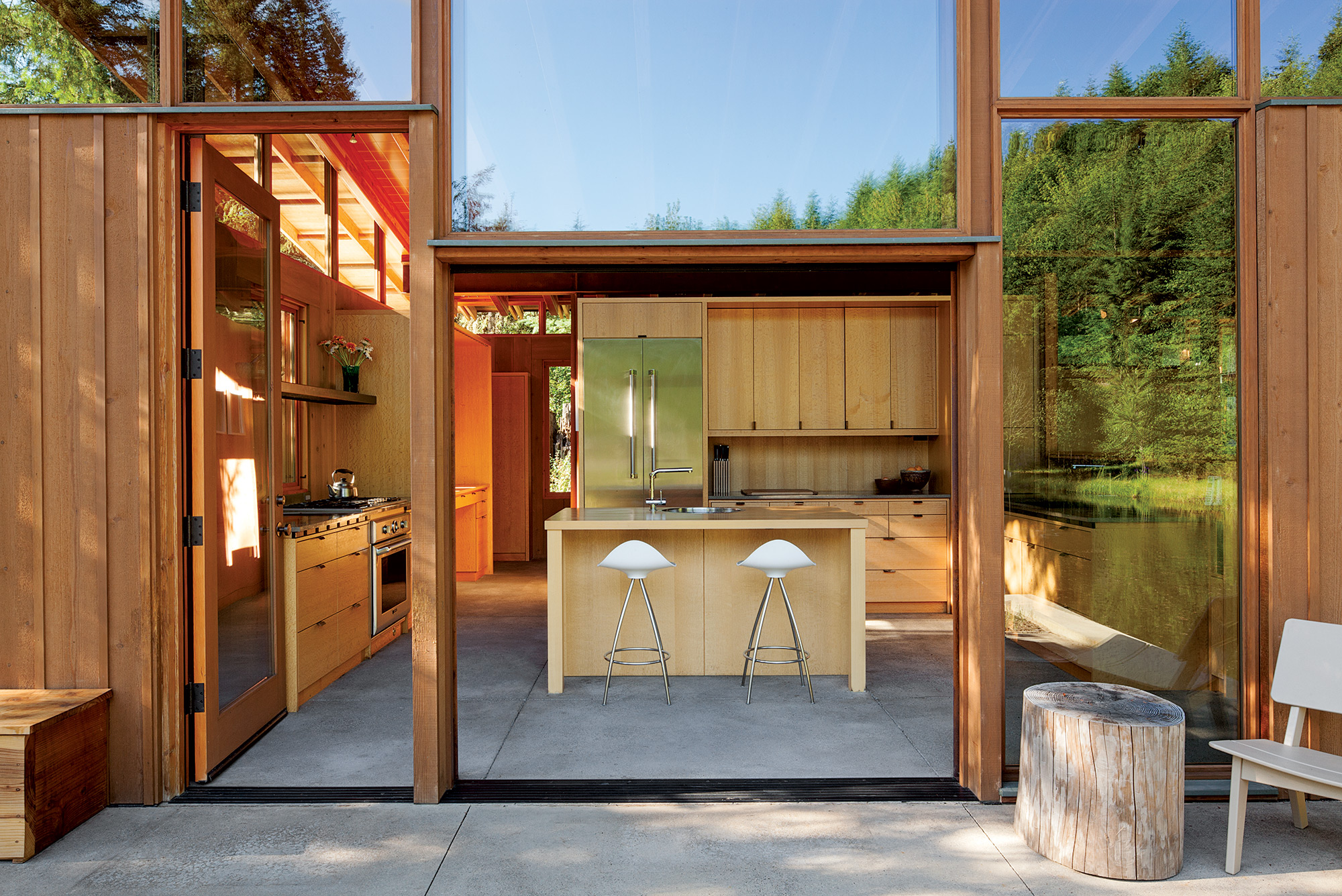 The kitchen’s concrete floor merges with the exterior patio, another of Etzel’s favorite features. 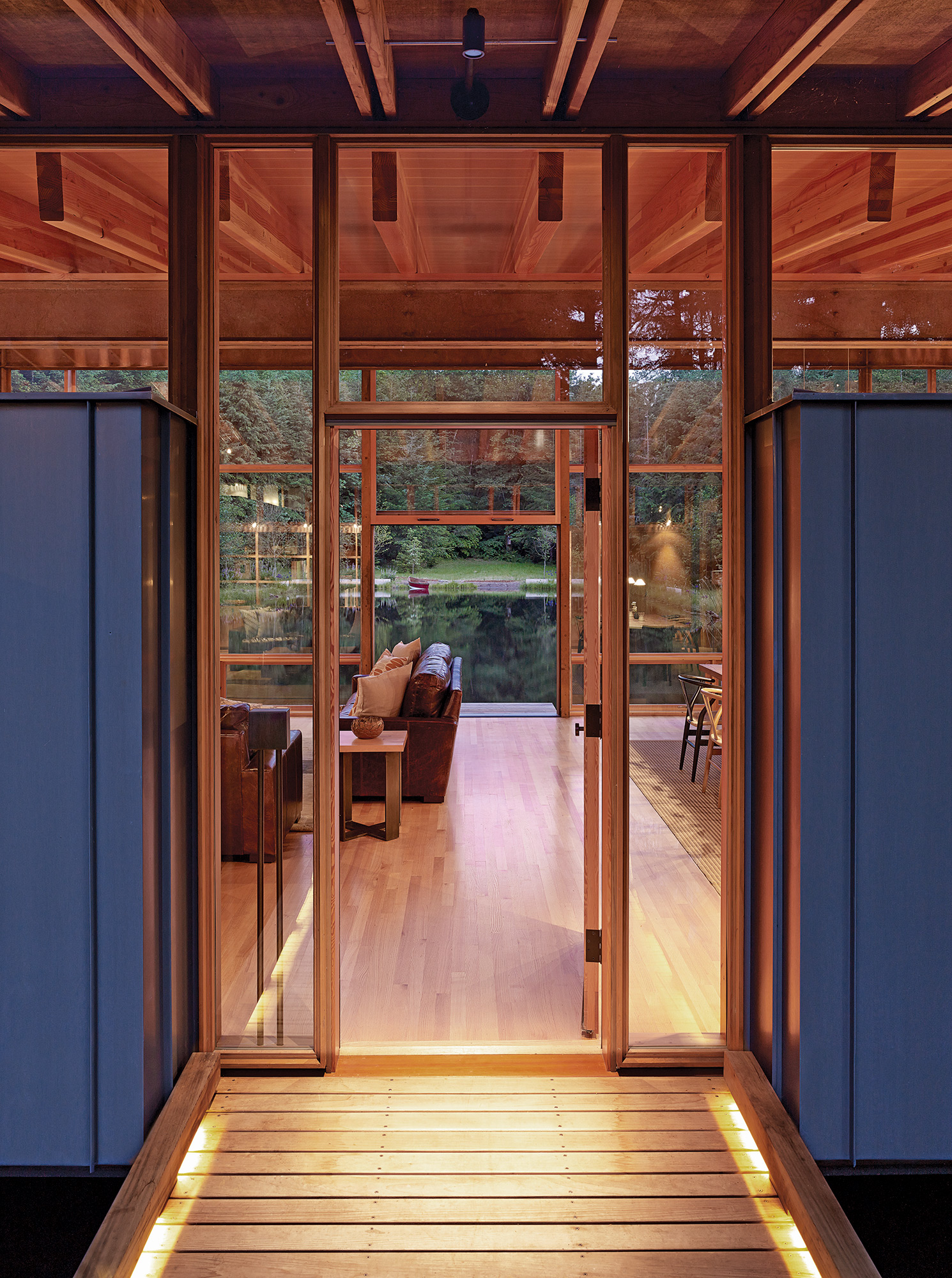 Visitors walk through the forest and over a bridge to arrive at the home’s front entry. Looking through the front door, the pond unexpectedly appears. The homeowners love to fish and swim from the small deck located outside of the living room. 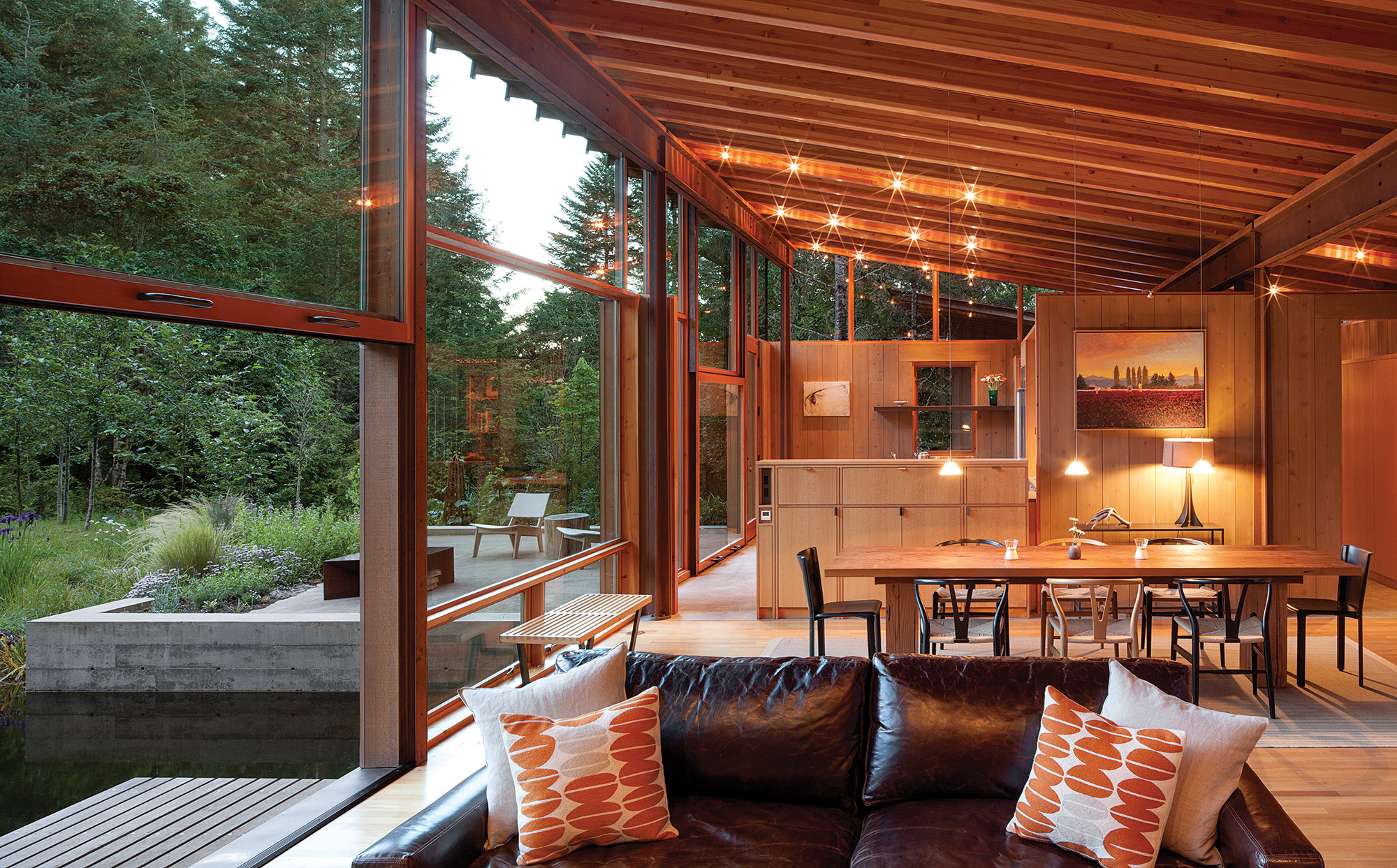 For open flow, the kitchen is separated from the dining room and living room by low cabinetry. 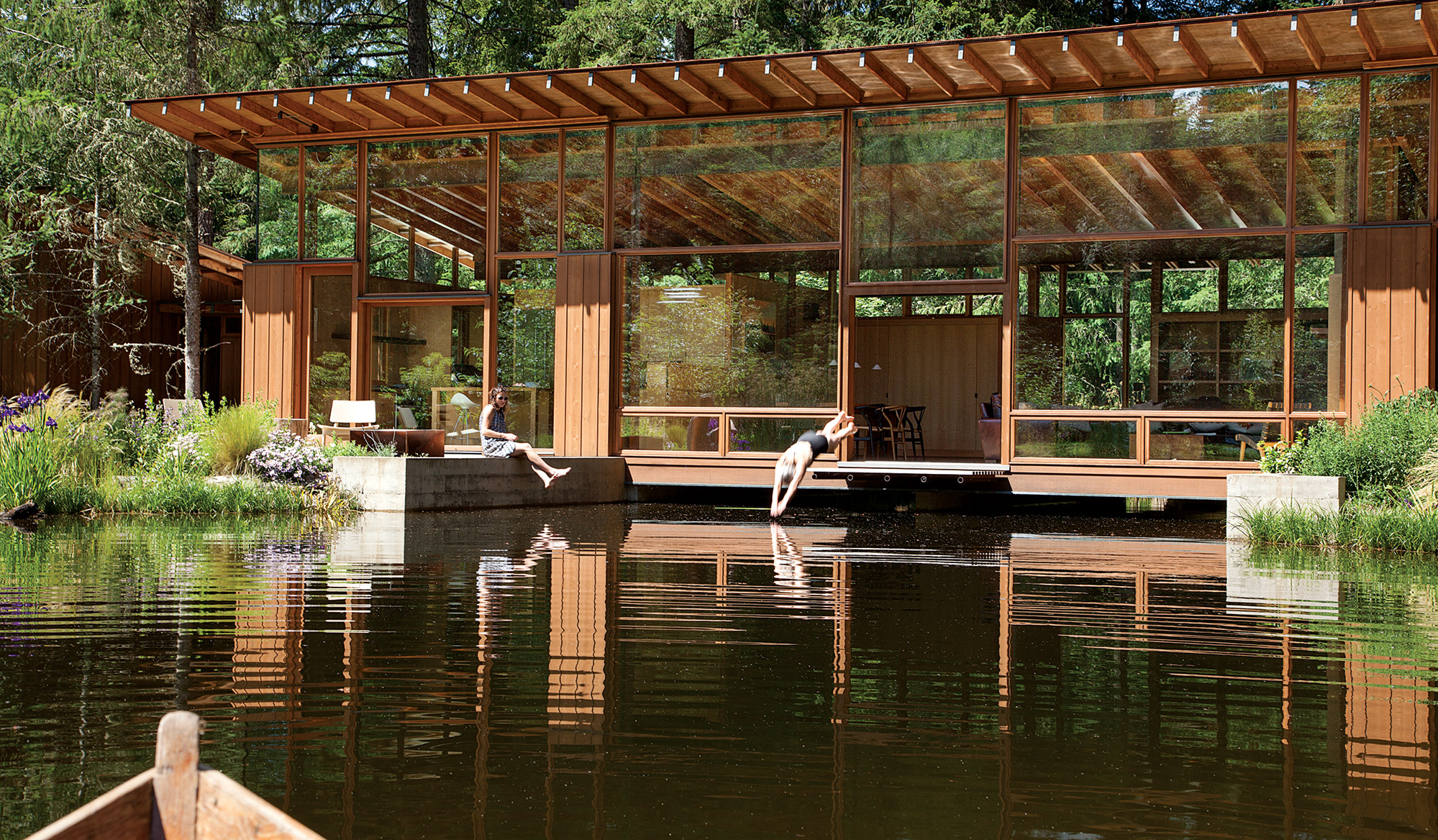 Guests trod a meandering path to arrive at the house, hidden amid the trees. 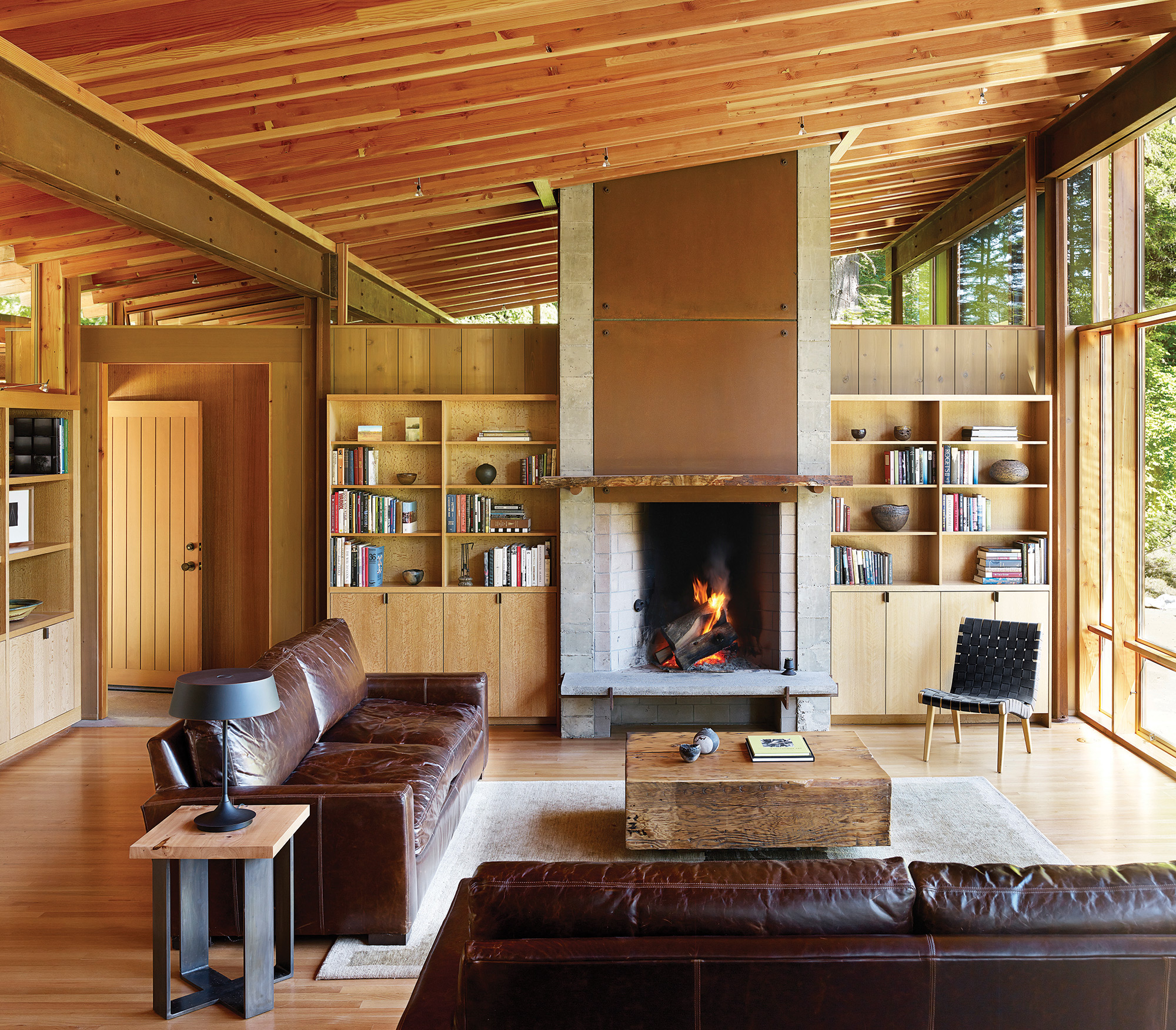 The living room is sparsely decorated with a focus on the view.