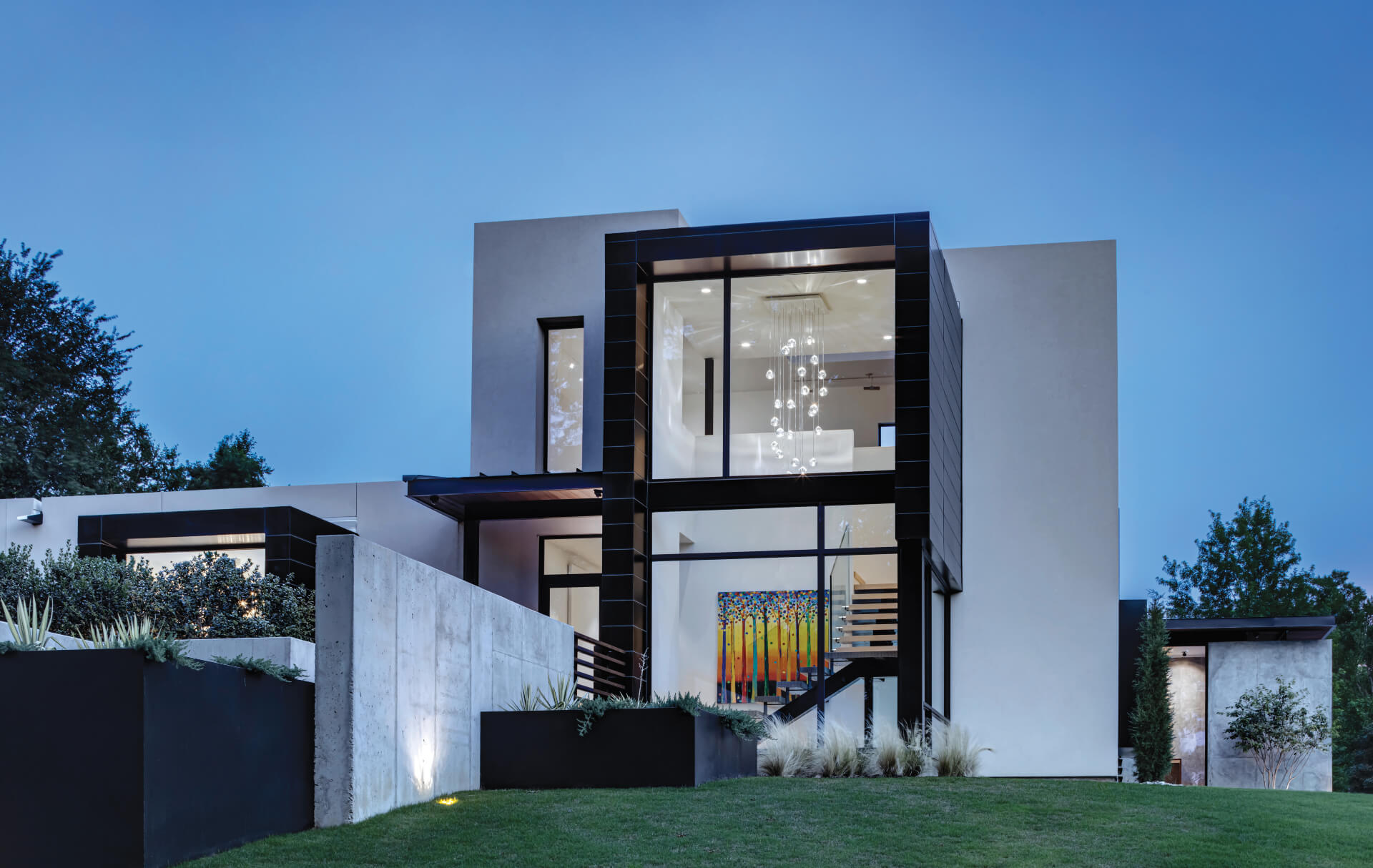 Designed by Brian Freese, the 7,800-square-foot Victor house in Midtown Tulsa reflects a style the architect calls “Midwest Modern,” which uses “elemental, natural materials to create a modern vocabulary that reflects and responds to the local climate, geography, history, and culture.” The artwork depicting aspen trees is by Judith Dunbar.

03 May Pause, Reflection, and Visual Delight

Architect Brian Freese describes a house he designed in 2019 in Tulsa, Oklahoma, as a premier example of “Midwest Modern” architecture, a term he coined to capture the design principles of his firm, showcased in this unique residence called the Victor house. “I think that term captures the sense of a very modern home, situated in this part of the country with its own unique conditions,” Freese says. “Also, this part of Tulsa features scores of European country and neoclassical mansions erected during the oil boom years of the 1930s and ’40s, and we wanted something that would be more modern but which we could integrate into the neighborhood and natural surroundings. We did this mainly with similar proportions and scale to the surrounding estates.” 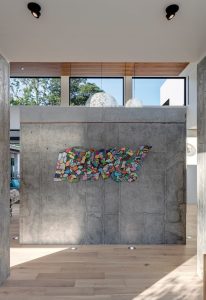 The Victor house features abundant windows and open interior spaces to take advantage of seasonal sunlight. A wall sculpture by David Kracov provides a bright pop of color against the concrete wall.

The resulting blocked forms of the 7,800-square-foot residence employ myriad glass windows to maximize natural light. The home’s design also offers multiple access points to the outdoors through sliding patio doors. Freese, who lists Richard Neutra, Louise Barragan, and Carlos Scarpa among his influences, explains that the residence was designed to provide numerous “moments” to peruse or interact with the exterior spaces. 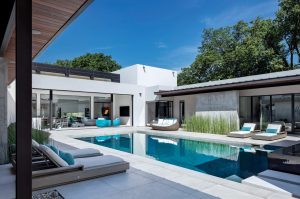 The focal point of the interior courtyard is an expansive pool. The house was designed with numerous sliding doors to ease the transition from indoors to out.

“I use the word ‘moment’ with purpose,” Freese says. “Rather than piling the blocky components on top of one another, we provided glass connectors between the main volumes with views to pocket courtyards or ‘captured nature’ — places that connect the interior to the outdoors and provide opportunities for pause, reflection, and visual delight.” 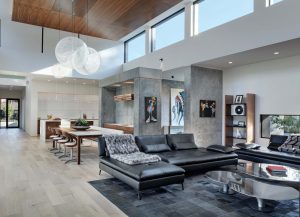 The owner of the Victor house planned the interiors, including choosing the fixtures and artwork.

For that reason, Freese designed the structure with expansive patios and a central courtyard with a pool, not unlike a classical Roman villa, though in the context of a Modernist composition. “At the same time,” he says, “We provided many access points that serve to invite people outdoors, to connect the interior private spaces with outdoor public areas.” 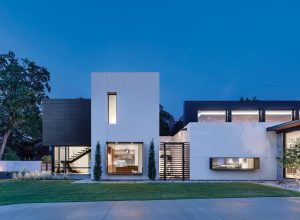 The blocked planes of the Victor house illustrate the principles of “Midwest Modern,” with numerous points of entry integrating the structure with its surroundings.

Freese points out that the design process was a seamless collaboration between architect and client. “The owner was pretty much responsible for the interior design,” Freese explains. “I have to say, if he had chosen another path in life, he would have made a great interior designer. He has an incredible eye for scale and composition.” 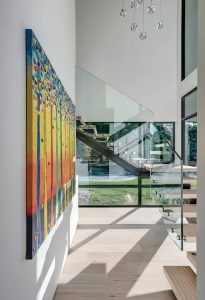 A glass stairwell provides a sense of connectivity with the outdoor landscape.

For his part, the owner of the Victor house corroborates their successful approach. “I knew Brian was the ‘Modernist guy’ in Tulsa,” he says. “When it came time to build the house, he was the natural choice.” The two worked together closely from start to finish. The result was an award-winning house that has become almost a tourist attraction in Tulsa’s stately Midtown neighborhood. “I do get a lot of positive reinforcement from people in Tulsa who stop to take photos,” the owner says, laughing a little. “And we hear a lot of ‘oohs’ and ‘ahhs’ from anyone who visits.” Freese says the project was also unusual in that the design flowed smoothly from start to finish. “It was a great collaborative effort,” he says. 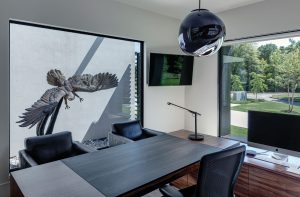 The study features a bronze sculpture by artist Steven Bennett.

While the Victor house provides a stately landmark in Midtown Tulsa that draws the gaze of locals and visitors alike, the house itself provides a series of vantage points for those inside looking out: “The lifted ceilings allow for clerestory windows that bring in abundant natural light and frame views of the slow-moving clouds,” Freese explains, adding that “the glass in the upper stories, especially in the art studio, provides amazing views in every direction.” The house sits atop a slight rise, surrounded by prodigious oak trees and expansive greenspace, which further accent the planes and angles of the Modernist design. The result is the sort of success every architect strives for: a structure at scale that is itself a work of art. 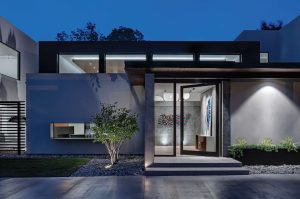 The grounds of the Victor house include immense oak trees, while the landscaping near the house embraces the Modernist ethos of natural materials enhancing the design of the structure.

Freese won a pair of AIA design awards for the Victor house in 2021: an Honor Award from AIA Oklahoma and a Merit Award from AIA Eastern Oklahoma. The house is a featured entry in a book that will debut this fall called High on… American Architecture. 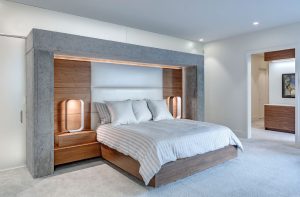 The homeowner’s suite showcases Modernist design principles, from the geometric framing to the abundance of natural light. 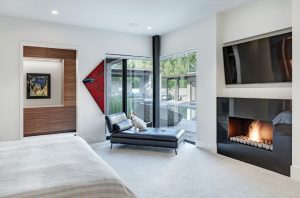 A triangular painting by artist Joseph Buchanan interacts with the architecture in the bedroom suite. 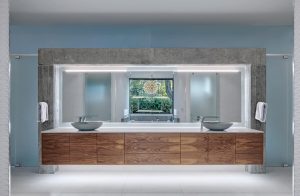 The airy, serene nature of this bathroom is emphasized by a floating vanity.

“We had a lot of fun doing this house,” the owner says. “Brian confided in me that he thinks this might be one of the best things he’s done yet.”