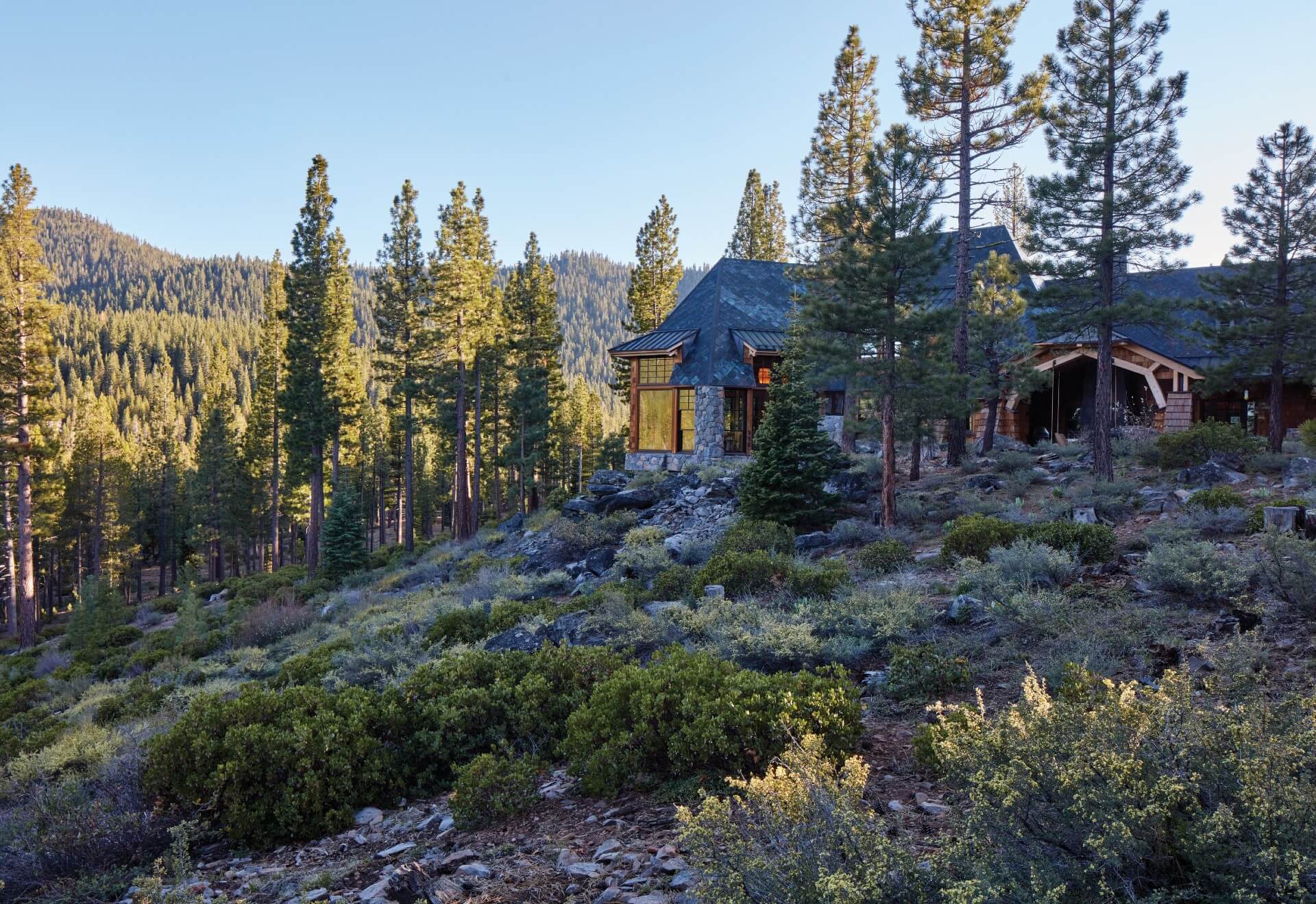 The timeless lodge-like home in Martis Camp, located between Truckee and Lake Tahoe, California, benefits from year-round recreation with a lift to Northstar California Resort for alpine skiing, a well-developed trail system, golf, and tennis.

In the mountains of Northern California, a home takes in the sweeping vista of the landscape and the sky’s moods. The angled design of its architecture creates unique and, at times, whimsical perches and sheltered patios for indulging in the nuances of place.

It all began with a forested lot the homeowners found at the edge of Martis Camp, a private luxury development between Truckee and North Lake Tahoe. Their vision was a timeless home that would serve their young family and circle of extended family and friends today and become a treasure to be passed down through future generations. 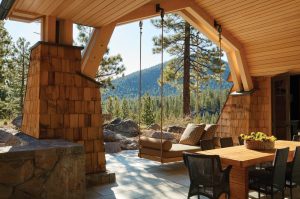 A covered porch and full outdoor kitchen are located off the living areas so the homeowners can enjoy the outdoors. 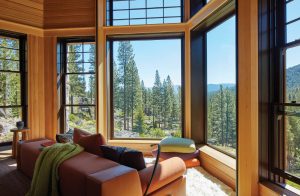 The prow of the living area overlooks the alpine landscape.

The homeowners contacted The Wiseman Group, a San Francisco interior design firm that had assisted with their Bay Area home and first home in Tahoe, and who in turn recommended architects Ike Kligerman Barkley (IKB). The architecture firm is headquartered in New York City and San Francisco, with an office to open soon in San Diego. Founded in 1989, IKB is known for “design rooted in tradition but modern in its sculptural forms, taut detailing, glass expanses, and often a touch of whimsy.” 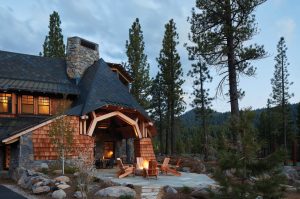 A firepit outside the covered porch on the home’s west side is a perfect gathering place in the evening. The outdoor dining table is lit from above by a 5-foot-tall owl lantern. 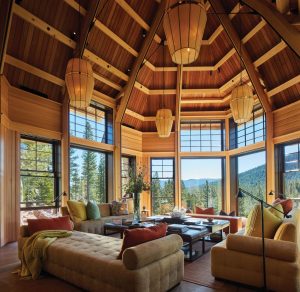 The Wiseman Group curated the living area with custom touches: the sofa where the room steps down to the prow has a back for sitting toward the fireplace while the opposite side looks out to the view; the donut-shaped coffee table has leather sections for seating; and the hanging lamps have durable fiberglass shades that appear to be aged paper.

Joel Barkley, formerly a principal with IKB and the project architect, recalls walking the lot with architects Carl Baker and Ken Avery. “We were on a ridge at the edge of a protected forest with views of the valley, mountains, and the Northstar ski area. The owners wanted the setting lodge-like and naturalistic with limited disturbance,” Barkley says, adding that they also requested a structure reminiscent of an Adirondack lodge. 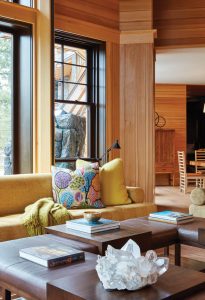 Colors from nature inspired the selections of ochres, greens, blues, and browns.

IKB’s design solution was a large pentagon shape that opened on two sides with stone cairns to mark the vestigial sides. “The design created intricacies, like the triangular nodes, apexes that terminate in stone towers, and the opportunities for multiple sheltered porches, while maintaining a strong underlying figure,” Barkley says. The architecture was influenced by a Museum of Modern Art exhibit featuring Frank Lloyd Wright sketches for A-frame boat houses near Lake Tahoe, the rustic qualities and porches from Adirondack lodges, and the century-long durability of the Timberline Lodge at Mount Hood, Oregon, with its steep roof to handle snow loads.

To unite the structure with the site, all the stone used in the home was excavated from the property. The patinated copper roof assists with fire resistance, and the selection of redwood and cedar is both durable and consistent with the surrounding area. 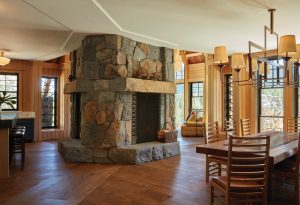 At the point where the home’s geometric angles come together, a three-sided fireplace separates the kitchen, dining, and living areas in the semi-open plan. The custom fireplace tiles from Pewabic Pottery have a design in the angled shape of the home, which also repeats in the art-glass windows.

From the road, the approximately 12,000-square-foot home appears hidden and smaller. The front door pivots open, revealing a view of the library. The homeowners are avid readers, and the library anchors the home with books and stories, explains Paul Wiseman, founder of The Wiseman Group. “There is a ‘wow’ moment when you enter the home, with the double height of the library, the black millwork, the red ceiling, the three custom mica pendant lights, and the high cupola,” he says. 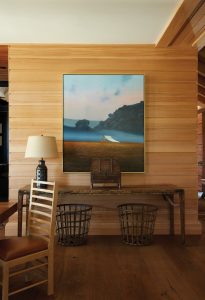 The antique Ming painting table with lacquered finish appears almost contemporary in its clean lines, reinforcing the goal of timelessness in the home’s design and furnishings.

To the left of the entry are the public areas, with a three-sided fireplace separating the kitchen, dining room, and living room. The homeowner, a skilled cook, guided the kitchen’s proportions, materials, and efficiency. The living area extends out from the pentagon like a prow to take in views on three sides. The angled design allows for cozy window seats and private study carrels. “We created spaces to find privacy even if the home was filled with guests and extended family,” says Wiseman. 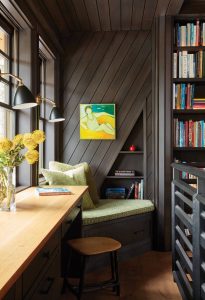 The library is the heart of the home, and the design team sought to create hideaway window seats where children could lose themselves in books.

The homeowners requested more color, playfulness, and tactile finishes in this home, a departure from their Bay Area residence. “The colors are from nature. Each of the three sofas [in the living room are] slightly different in color and design, including the one near the prow, where the back serves as a bench facing the fireplace, and stepping down, the seating looks to the views,” says James Hunter, a design principal with The Wiseman Group. 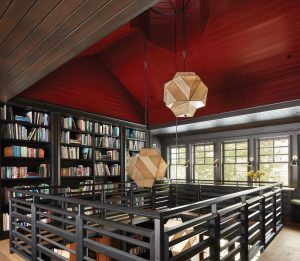 The interior design focused on furthering the architectural intention of timelessness. “We pursued a sense that the collection was developed and acquired over time, with new pieces (many of which we designed), things from their former mountain home, collectible 20th-century pieces, and antiques,” says Hunter. This is evident in the dining room, where the walnut dining table is inlaid with an 80-million-year-old fossilized slab. The cabinet is mid-century Danish, and the Ming scholar-painting table dates to the 18th century. 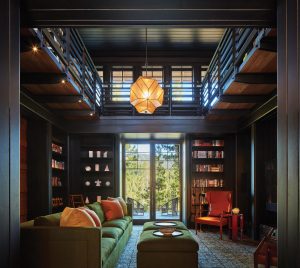 A 15-foot hand-hooked area rug by Stephen T. Anderson anchors the main floor of the library. The custom green sofa and ottoman were designed for comfort by The Wiseman Group. The white ceramics on the shelves in the shapes of mathematic symbols are vintage teaching tools, and the wicker patio chairs outside are by the early 20th-century designer Pierre Chareau.

To the right of the entry are the homeowners’ suite, two bunk rooms, and a guest wing that extends out from the pentagon. Where the angles join by the bedroom wing, secret stairs lead to the belvedere, a stone tower with a covered space to enjoy views in all directions during any season. At another angle joint, there is a second tower with stone pillars. The kitchen, dining, primary suite, and guest rooms open to sheltered patios to enjoy the views and sunlight variations, including the evening’s alpine glow. 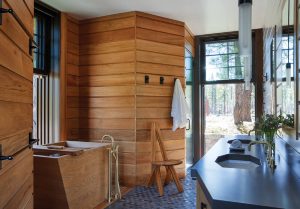 Geometric shapes appear in the primary suite’s bathroom in the vanity, the outline of the sinks, and the hexagonal floor tiles. The wooden chair — designed by Pierre Chapo, another early 20th-century designer — mixes old with new.

Summing up the home’s design, architect Ken Avery says, “It is fascinating how the motif of geometry and angles found itself in all kinds of details, a theme moving through the house and found in cabinets, door handles, tile, and art glass.” 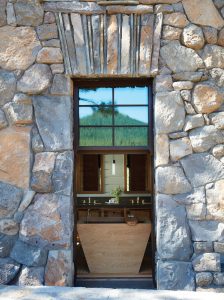